CGC’s Jim Palam spiffs up for the 70th Anniversary of the premier venue for the best-of-the-best classics and specialty vehicles with new gear, classy cards, a black mask and a snazzy haircut. In the process, he coins a new word to describe MONTERREY 2021: PEBBLE BEACH CONCOURS D’ELEGANCE: Automotacular! 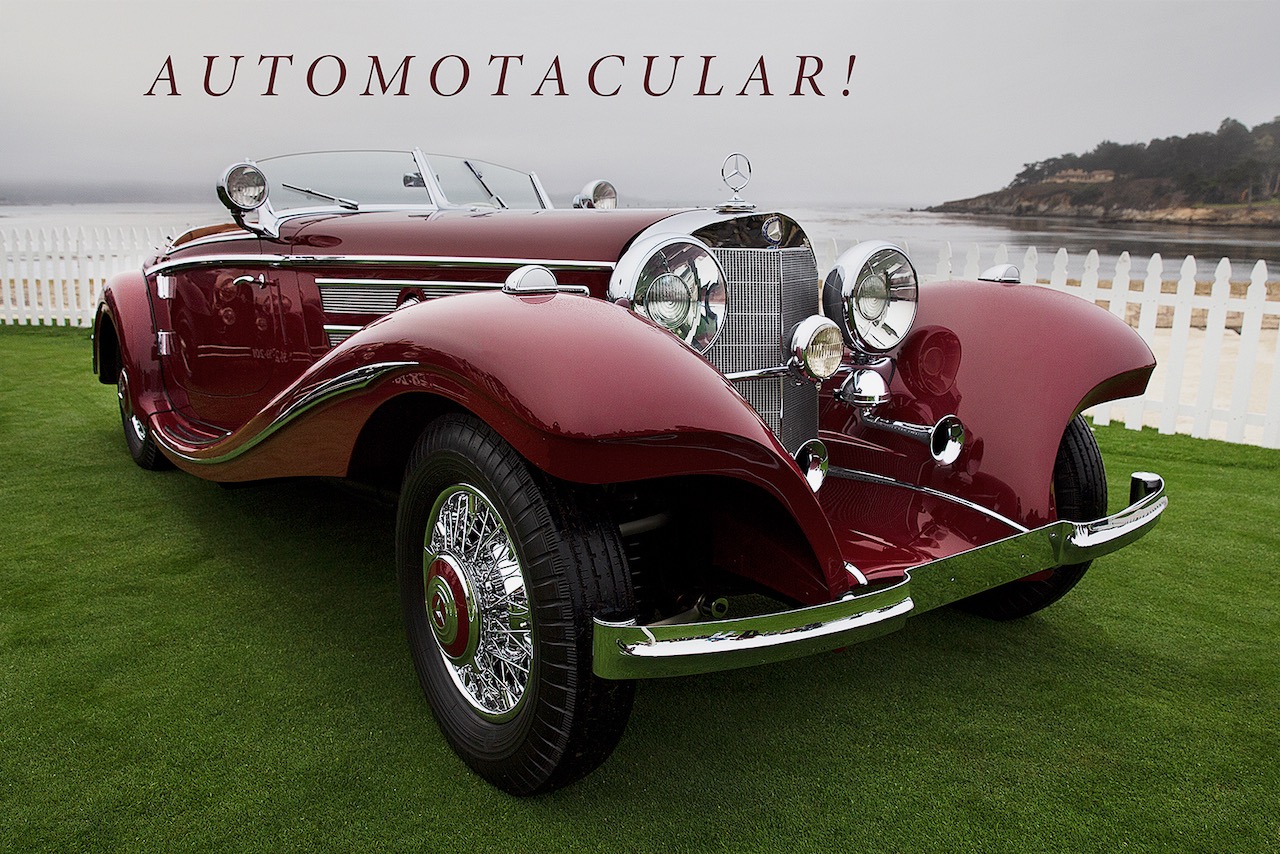 There are a number of judged automobile events that capture the undivided attention of the automotive press and the pulsating hearts of automobile enthusiasts – and then, there is the prestigious Pebble Beach Concours d’Elegance – the international pinnacle of automotive Pomp, Panache, Power and Perfection that has been rolling gracefully onto the panoramic 18th Fairway at Pebble Beach Golf Links since 1950.

In a word, Pebble Beach is Automotacular – a beautiful automotive spectacle of perfection. To attend this year, I would need more than my media credentials – I would need a new camera backpack that wasn’t so worn, classy new business cards, a fresh & formal black face mask for inside events, and while I was at it, a snazzy haircut couldn’t hurt. Once spiffed-up I drove into Monterey to grab a 6 AM shuttle that would take me into Pebble Beach. Event-side parking for most media is no longer included with your credentials and as it turned out, the shuttle was convenient and direct. By 7:15 AM I was sharing a morning coffee at the event with Gonzalo Silveira, a car collector who splits his time between homes and collections in Uruguay and Los Altos, California. I was now perked-up and it was time to hit the fairway!

Lining the premier bayside display-lane past the entry gate were ‘Class E’ Pebble Beach Best of Show Reunion cars and first in line was this breathtaking 1986 winner, a ‘36 Mercedes-Benz 500K Special Roadster from the Keller Collection. This year’s overall Class I Best of Show car was also from the Keller Collection, the very rare ‘38 Mercedes-Benz 540K Autobahn Kurier. 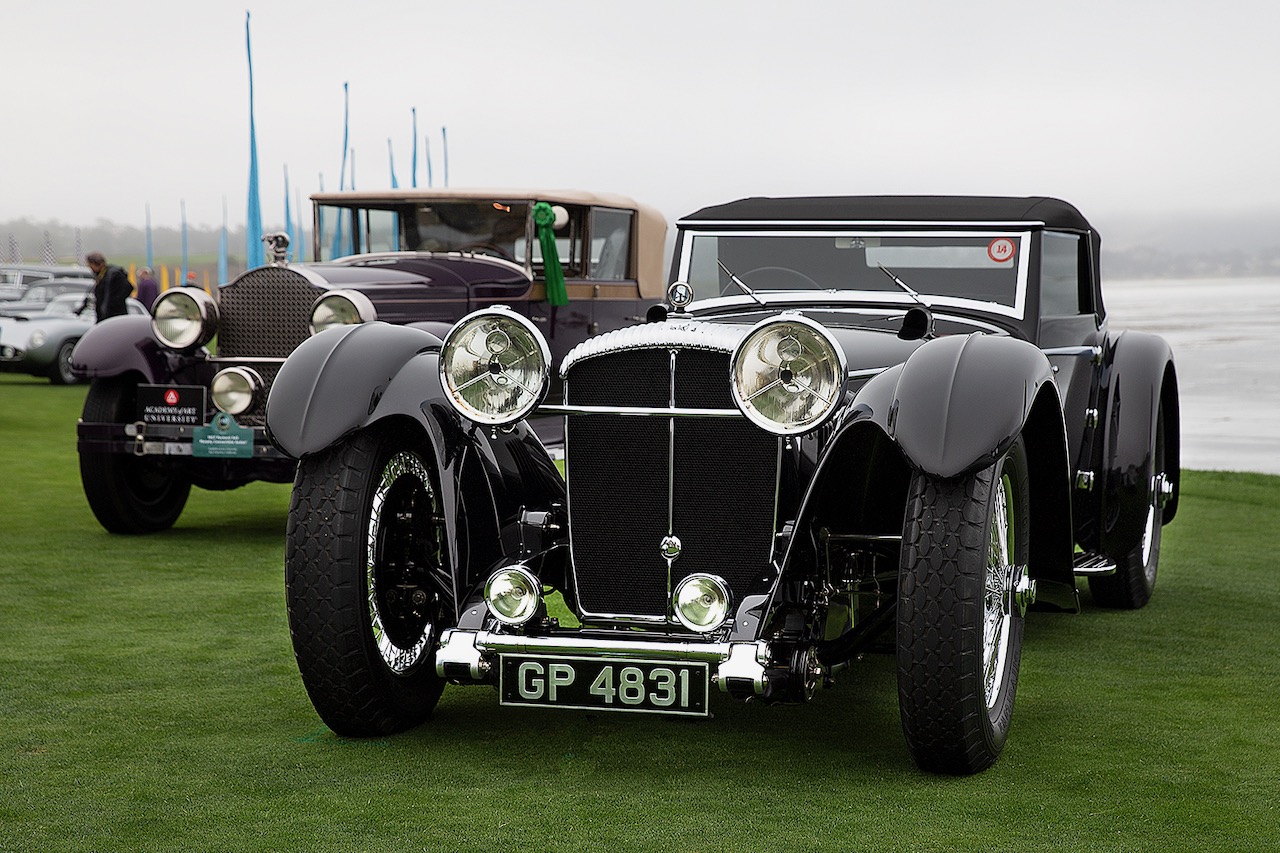 OK: Bear with me for a minute. I know this is the prestigious Pebble Beach report and decorum needs to be followed but I’m sorry, when I look at this ‘31 Daimler Double Six 50 Corsica Drophead Coupé I want to, no, I have to scream Bad Ass! Is this perhaps the quintessential Robber Baron car? It enthusiastically gets my vote. 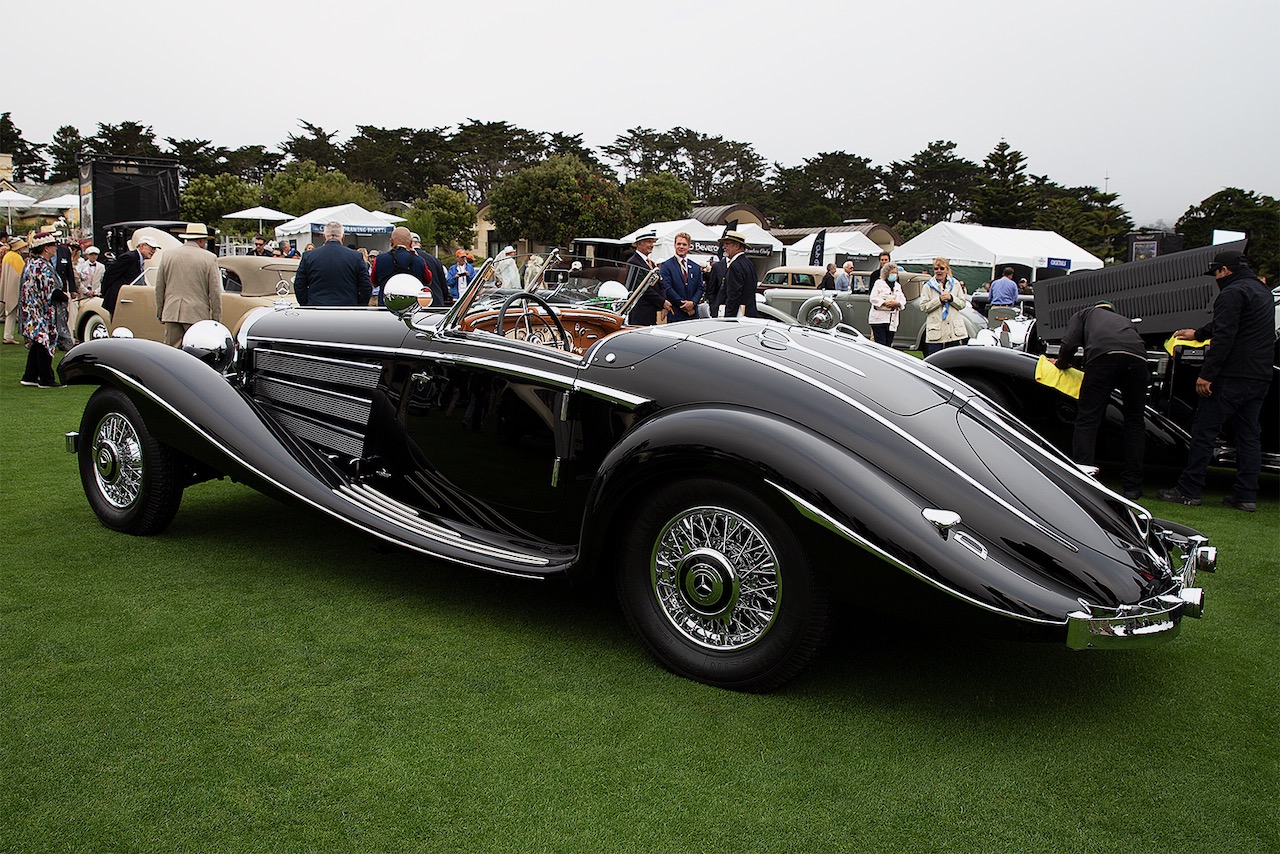 While it was hard to peel away from the Reunion cars another magnificent Mercedes-Benz caught my eye. Impossibly sleek, impossibly sexy and impossible to ignore, this ‘37 540K Special Roadster is owned by Richard & Melanie Lundquist of Palos Verdes Estates. The Lundquists are not only avid car collectors but avid benefactors to the McPherson College Automotive Restoration Program: https://www.mcpherson.edu/autorestoration/ 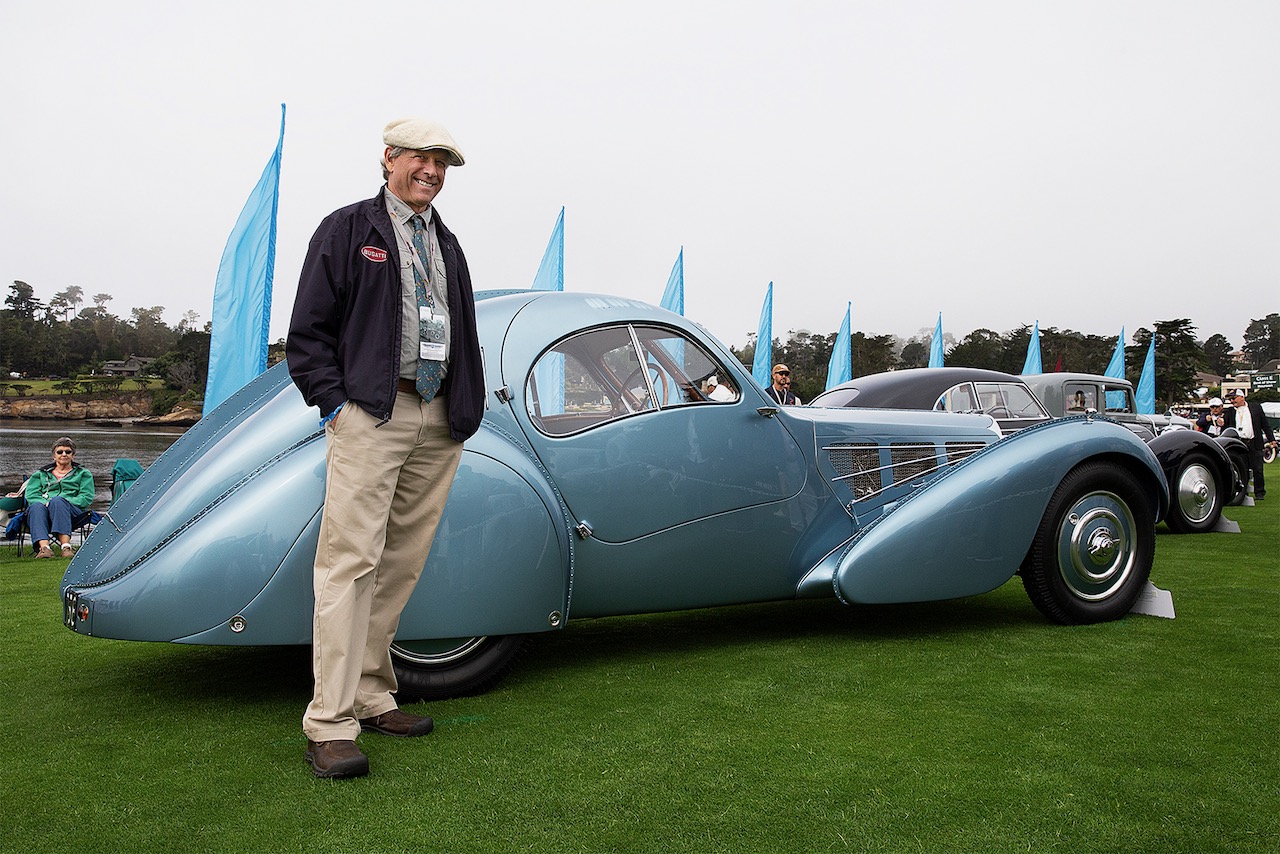 This ‘36 Bugatti Type 57C Atlantic needs no introduction. It is considered by the cognoscenti in the automobile collector’s world to be perhaps The Most Desirable & Significant Car ever produced. It is currently co-owned by Merle & Peter Mullin and Melanie & Rob Walton. So let me introduce you David Chamberlain, one of the artisans working with Jim Stranberg’s Restoration Shop, who helped bring this French car to its show-winning concours condition. He was responsible for restoration of the Atlantic’s exceptional woodwork – including chassis and interior components. 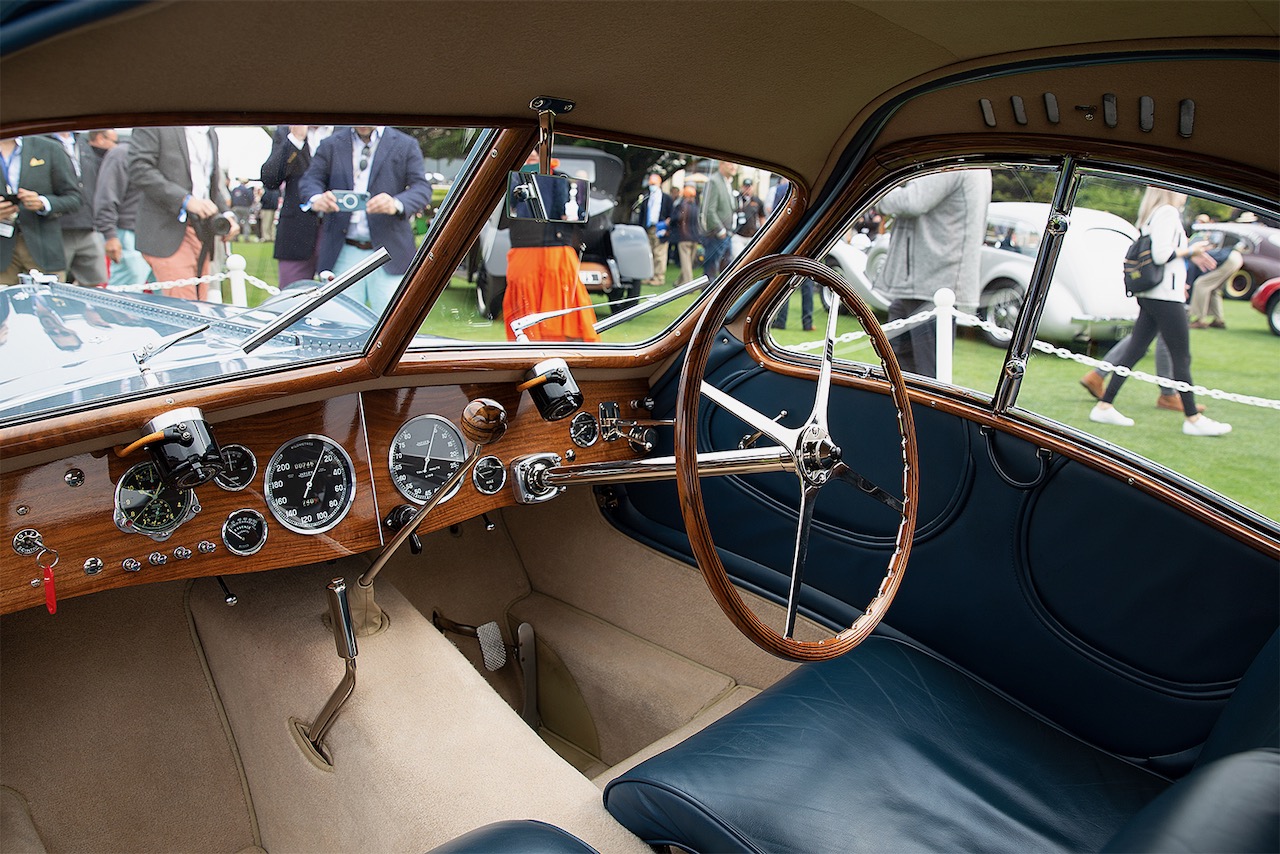 David was also responsible for inviting me in beyond the display area’s chain link barriers to get a closer look at the Atlantic’s interior. I had seen this car before on display in the Mullin Automotive Museum in Oxnard, CA, but this was the first time I had the privilege of inspecting its highly-refined and purpose-built ‘cockpit’ interior. This is the only surviving Aéro Coupé. It was delivered new to Britain’s third Baron Rothschild in 1936. 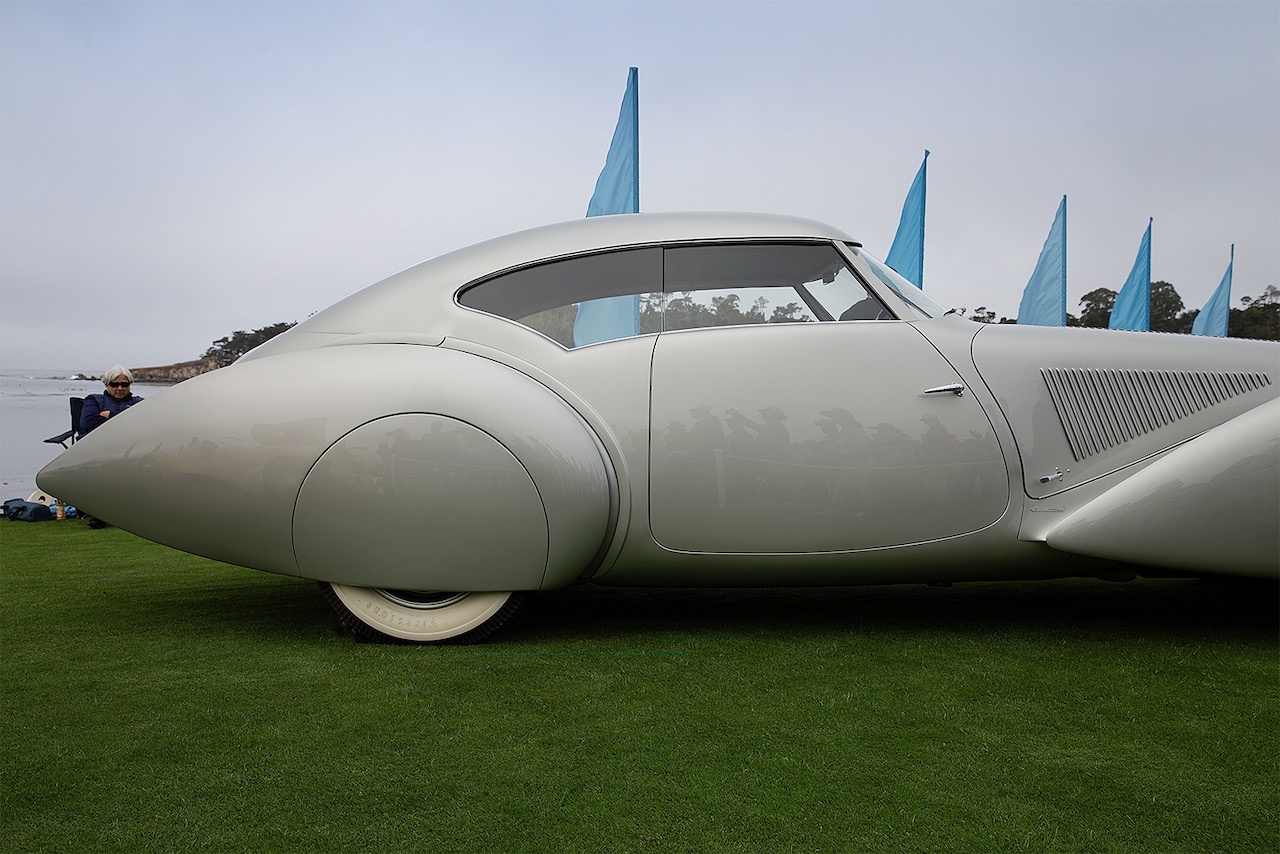 We’d need a Car Guy Chronicle’s widescreen here to show you the full profile splendor of this 2005 Best of Show ‘37 Delage D8-120 S Pourtout Aéro Coupé. So, I decided to snap a closer look at the aerodynamic rear-of-cowl sections. This streamlined sensation is proudly owned by Sam & Emily Mann of Englewood, NJ. 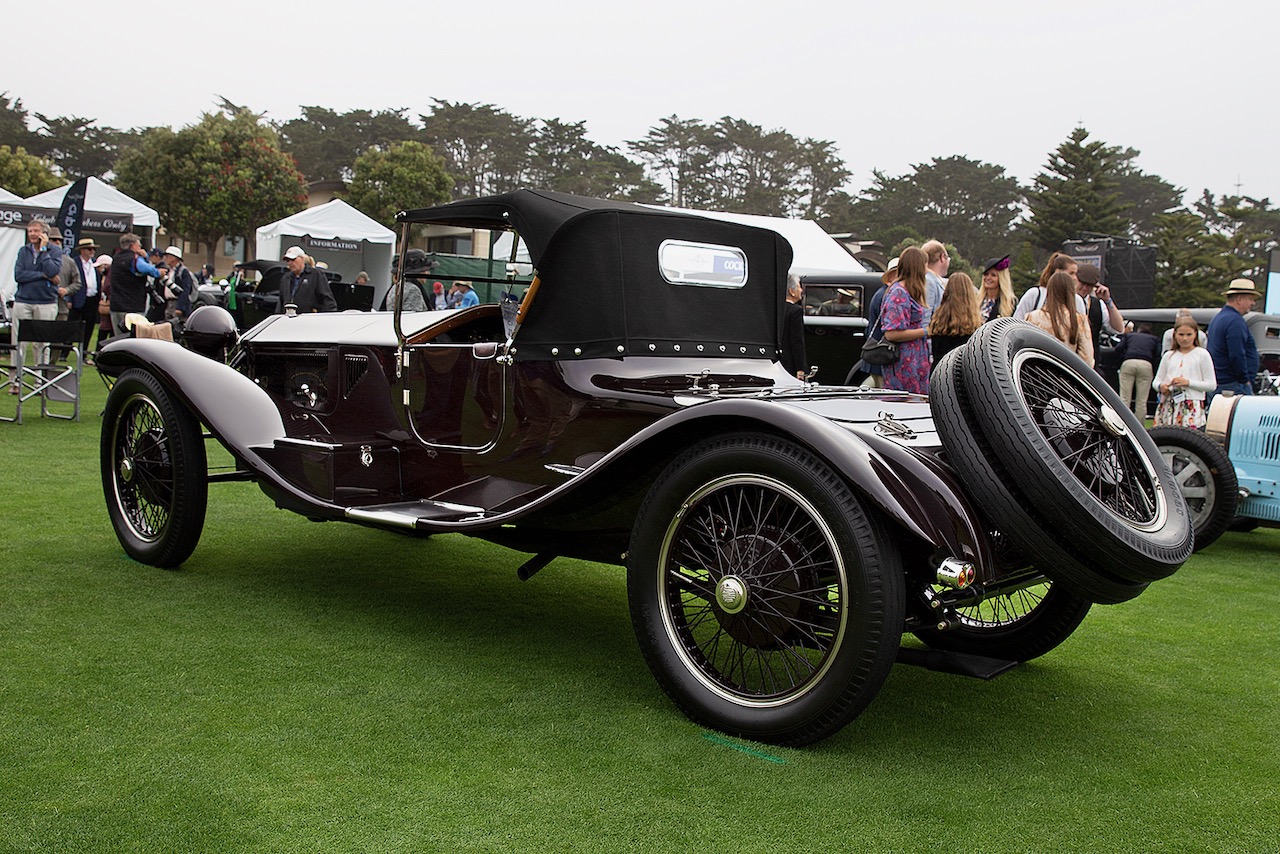 With its swooping twin-arch fenders and low body profile, this deep cherry-burgundy ‘25 Lancia Lambda Casaro Roadster has the look of a lean, long-distance runner. The Lancia is owned and passionately cared for by Paul & Victoria Tullius of Chico, CA. 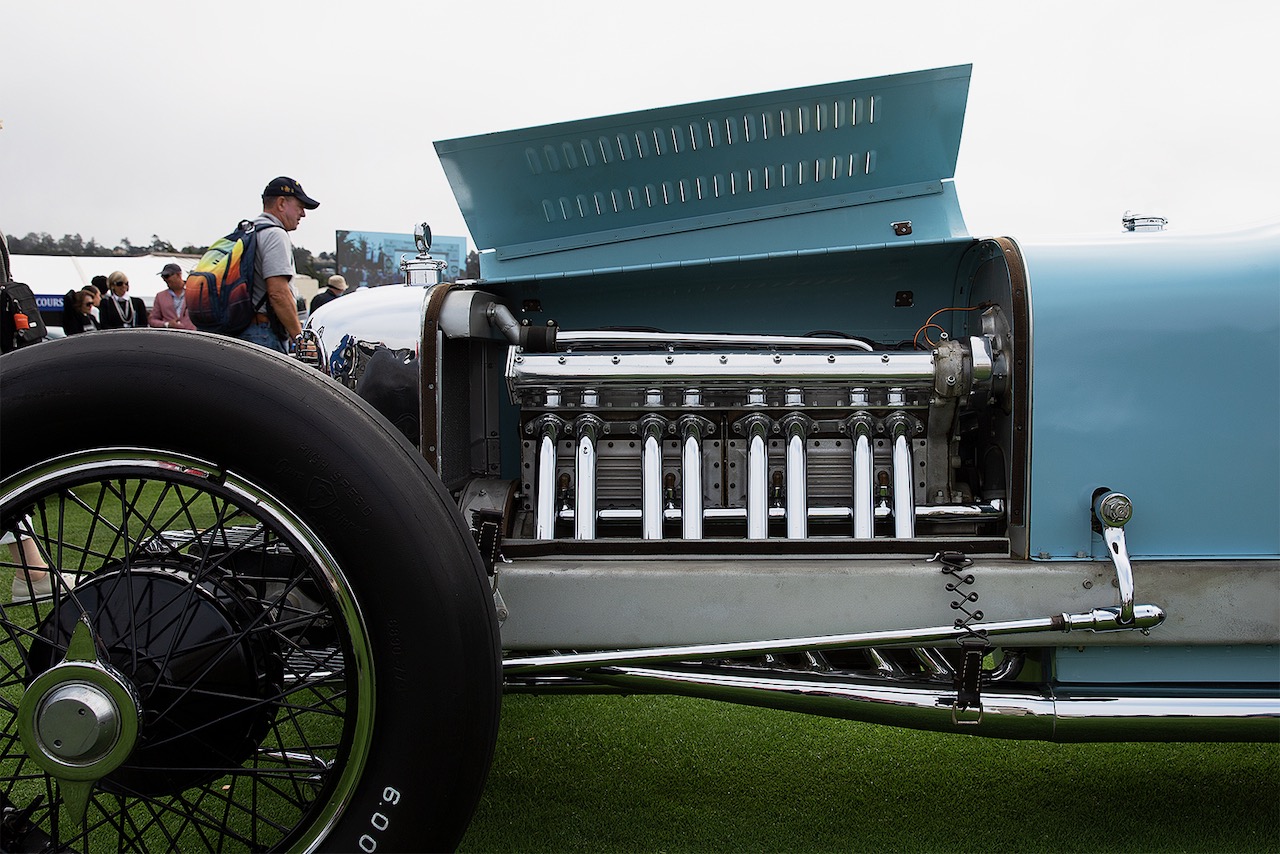 This ‘24 Miller 122 Junior 8 Special was brought to PEBBLE BEACH 2021: CONCOURS D’ELEGANCE from the Indianapolis Motor Speedway Museum. It was on display with an impressive collection of early Indy 500 winners that were designed and driven by automotive racing innovator Harold ‘Harry’ Miller in the 1920s and 1930s. Miller cars were not only beautifully designed and powerful; they were proven podium grabbers – having won the prestigious Indy 500 10 times! 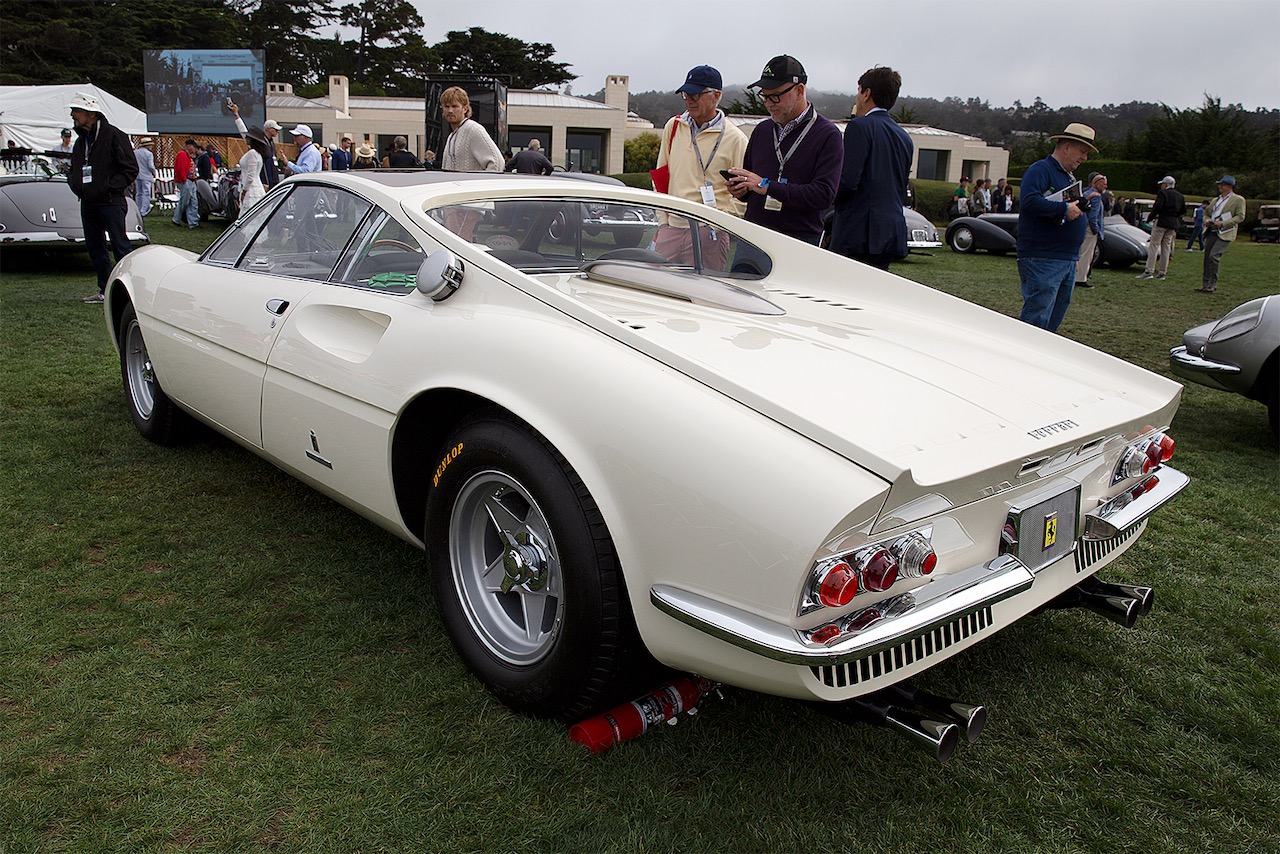 A rare, one-of-two ‘66 Ferrari 365 P Pininfarina Berlinetta Speciales took 1st Place in Class P-4. This triple-take concept sports car is often referred to as the Berlinetta Tre-Posti to describe its three-across seating positions with the driver in the middle. The car is featured in the Tour d’Elegance 2021 poster and is part of the impressive RQ Collections, The Woodlands, TX. 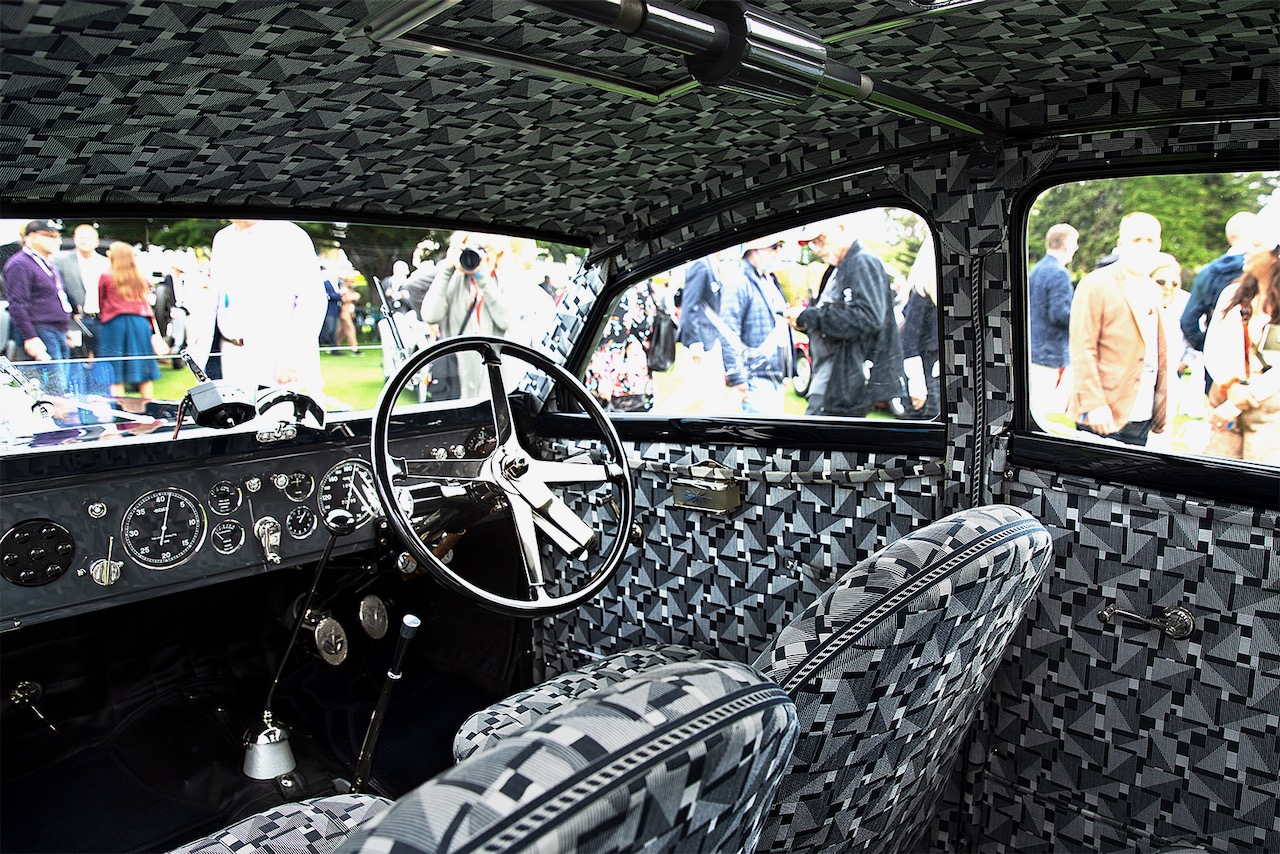 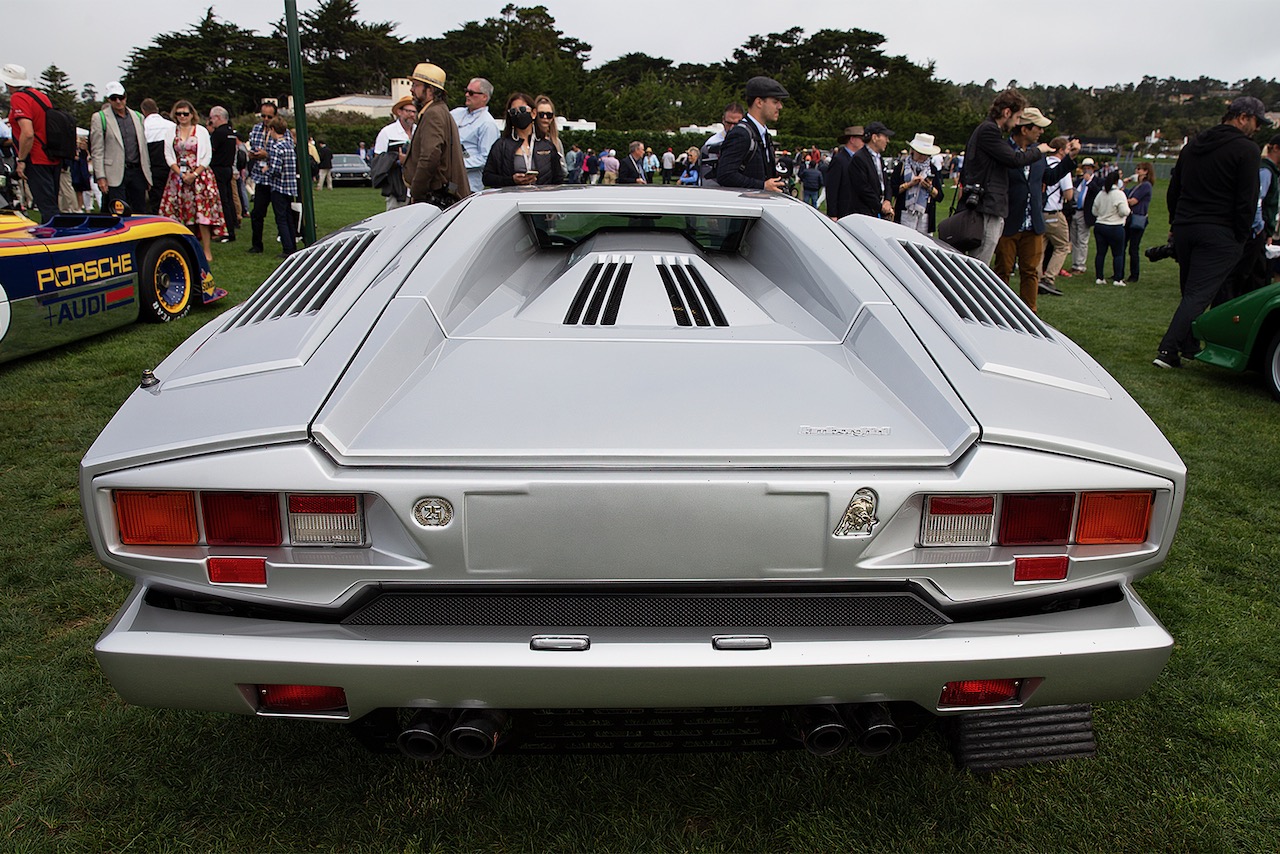 The PEBBLE BEACH 2021: CONCOURS D’ELEGANCE paid tribute to the Lamborghini Countach this year, marking the 50th anniversary of Ferruccio Lamborghini’s low and chiseled, scissor-doored Supercar classic. It was first introduced in 1971 as an audacious follow-up to the Miura. 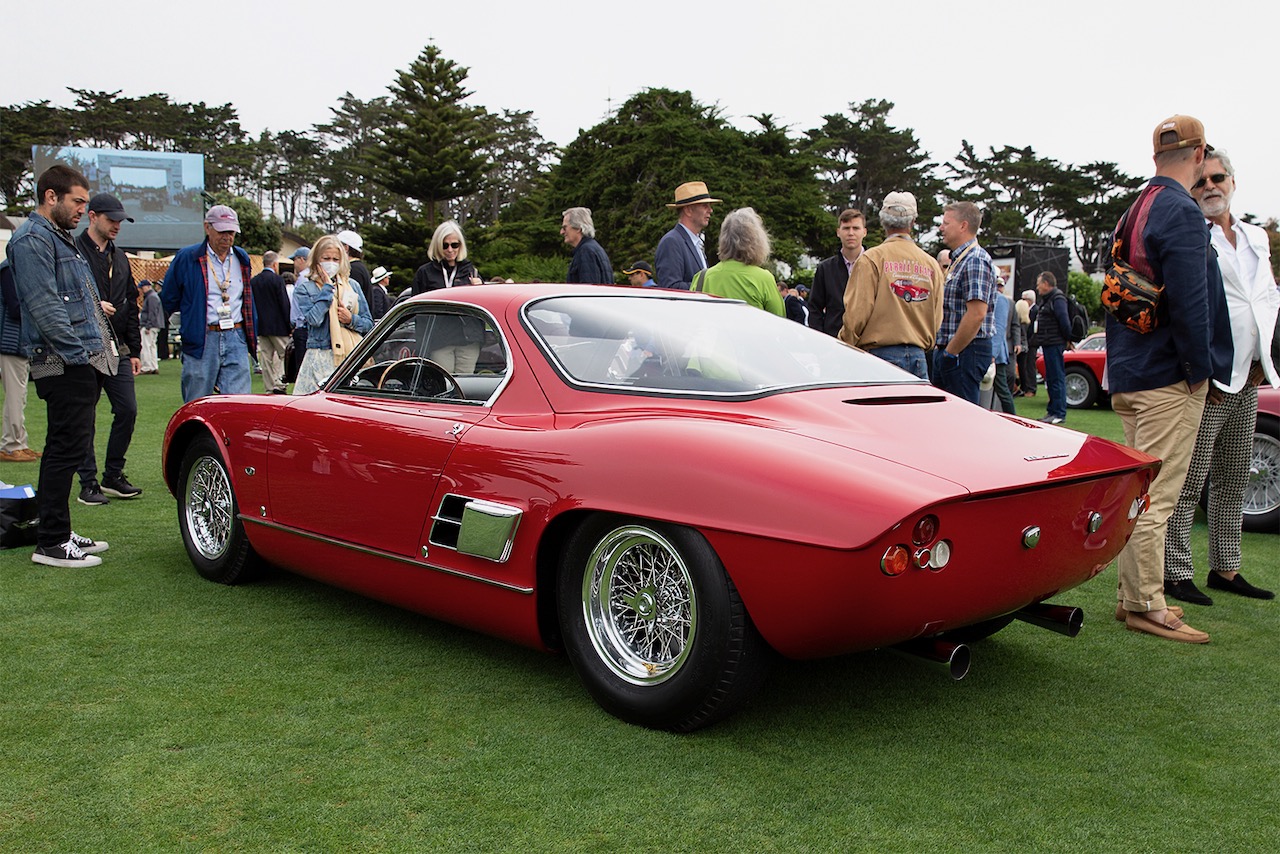 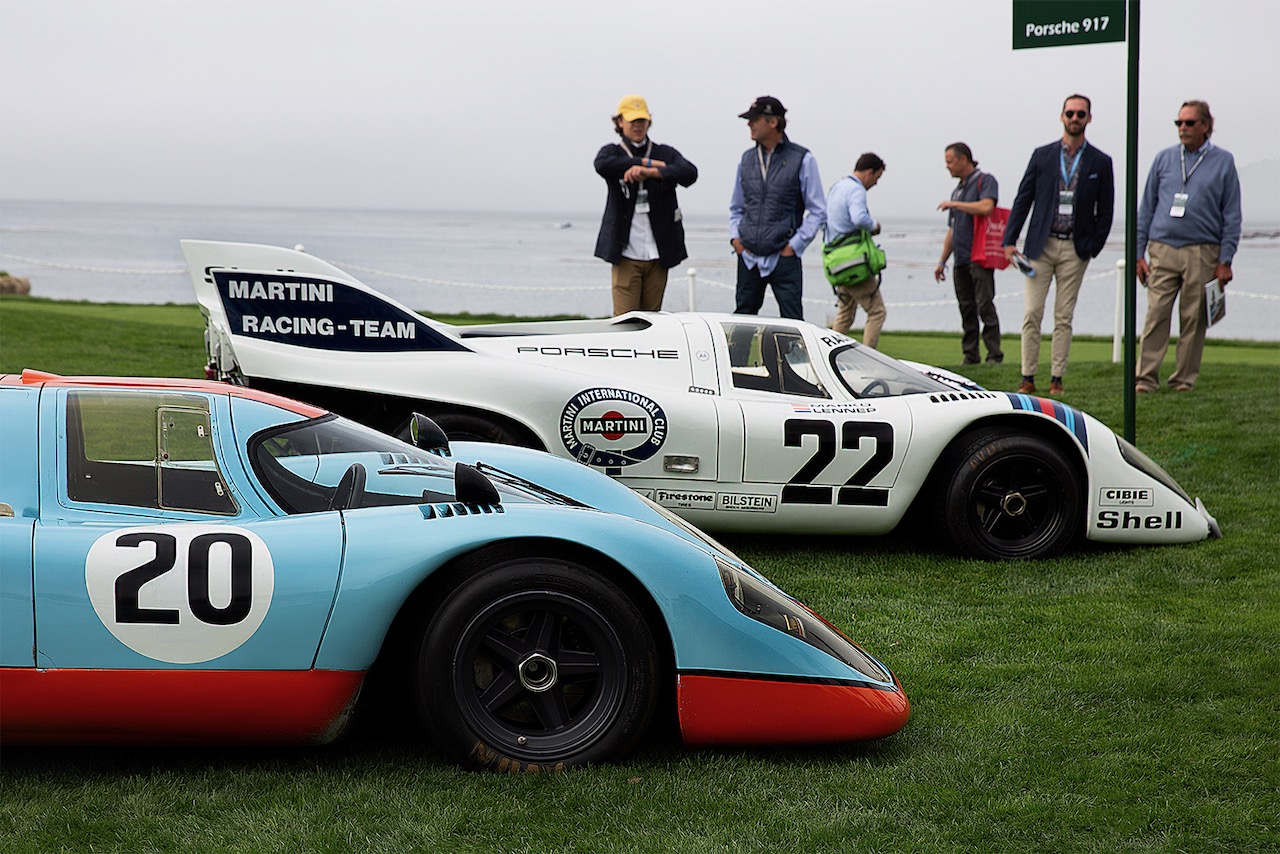 Racing Legends! Porsche brought their world-famous Circuit de la Sarthe cars to Pebble Beach and what a powerful display it was. At the leading-end of the lineup was arguably the most famous Porsche racecar of the period – 917 KH car number 22, the 1971 Le Mans winner driven by Gijsvan Lennep and Helmut Marko. I was lucky to get this shot of it and car number 20 early in the morning, as it was rarely not surrounded by fans for the remainder of the Concours. 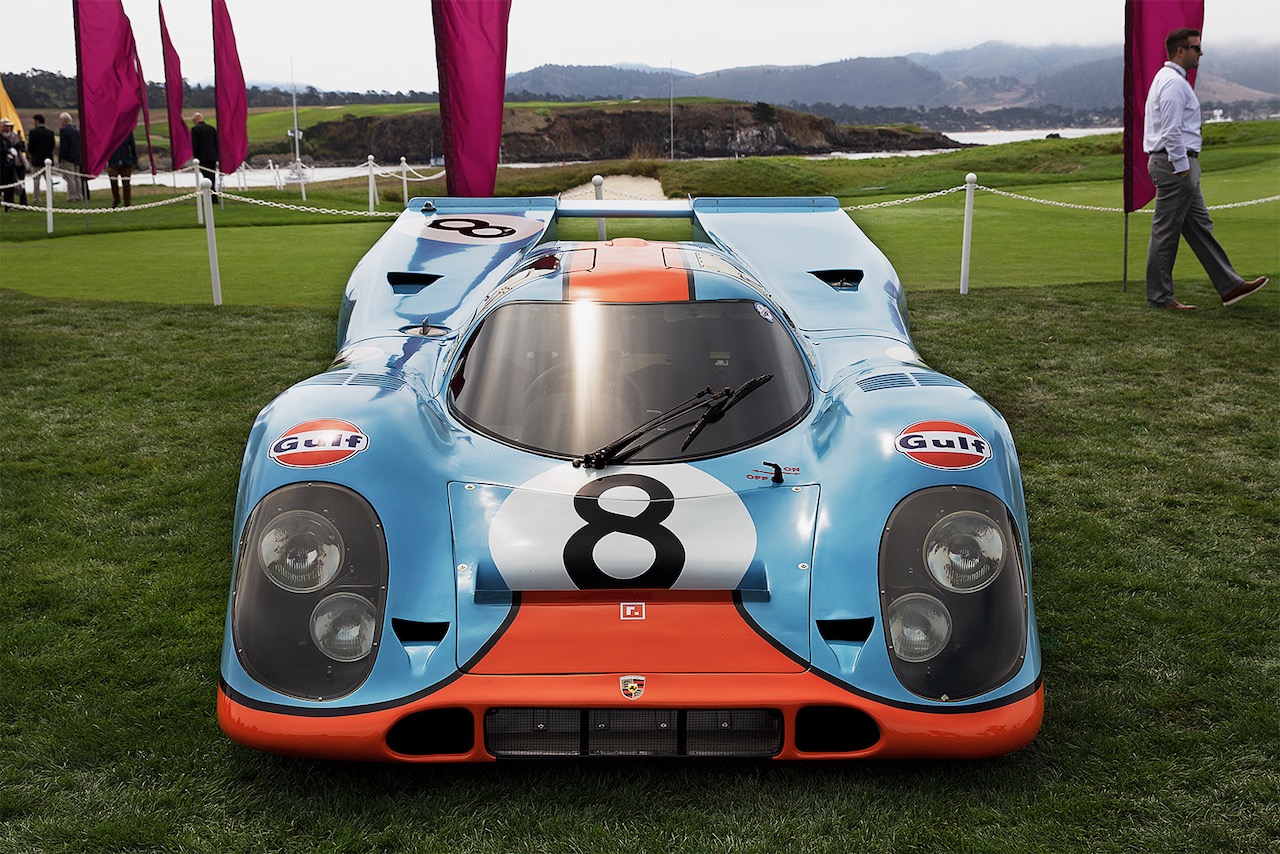 It happens: Color is transmitted from your eyes to the brain, the brain releases racing hormones and your heart begins to beat faster as a gasoline grin forms on your face. You’ve just eyed a bold blue and orange Gulf livery on a Porsche 917. This response is sometimes called an involuntary Automotacular reaction. But don’t worry, it’s good for you. Just ask any Car Guy! 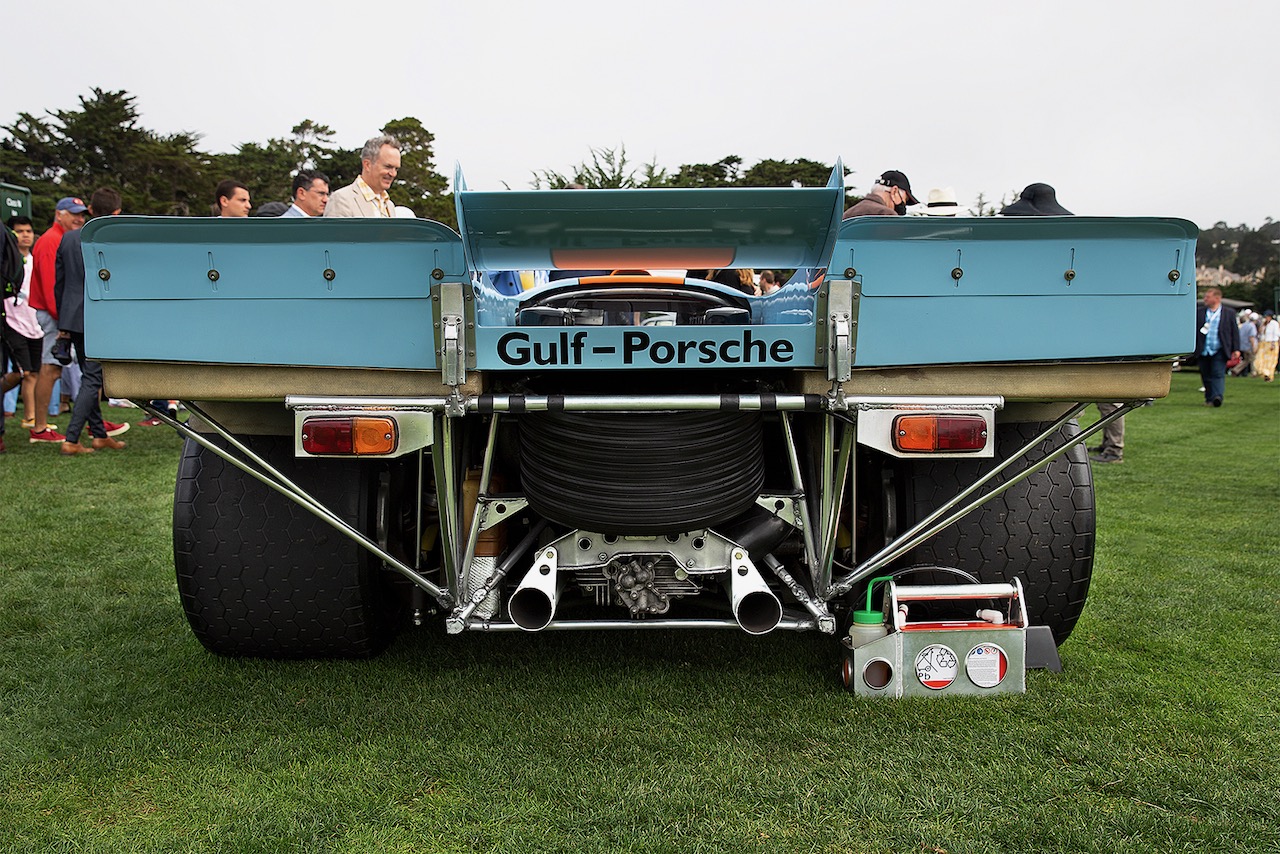 Almost all sanctioned racing has regulations and back in the day, at Le Mans, if you wanted your entry to pass inspection it had to have two seats, space for a suitcase and it had to carry an inboard spare tire. Here it reveals itself from the “Long Tail” end of Porsche 917K car # 2. 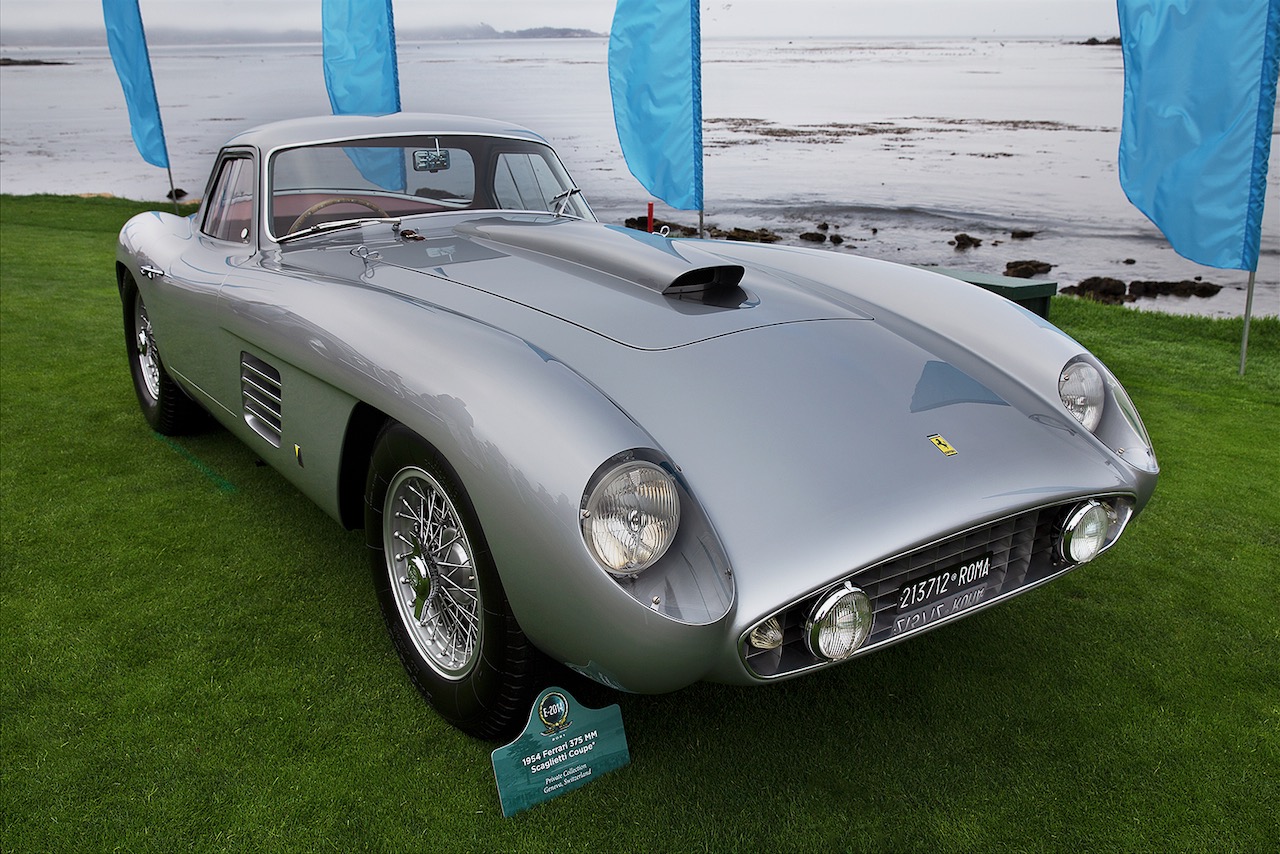 Lights! Camera! Ferrari! This sexy-silver competition-heritage ‘54 Ferrari 375 MM Scaglietti Coupe was originally ordered by film director Roberto Rossellini and was the Pebble Beach Best of Show in 2014. Surprisingly, this was the first and is still the only time Ferrari took the Top Honors at Pebble. 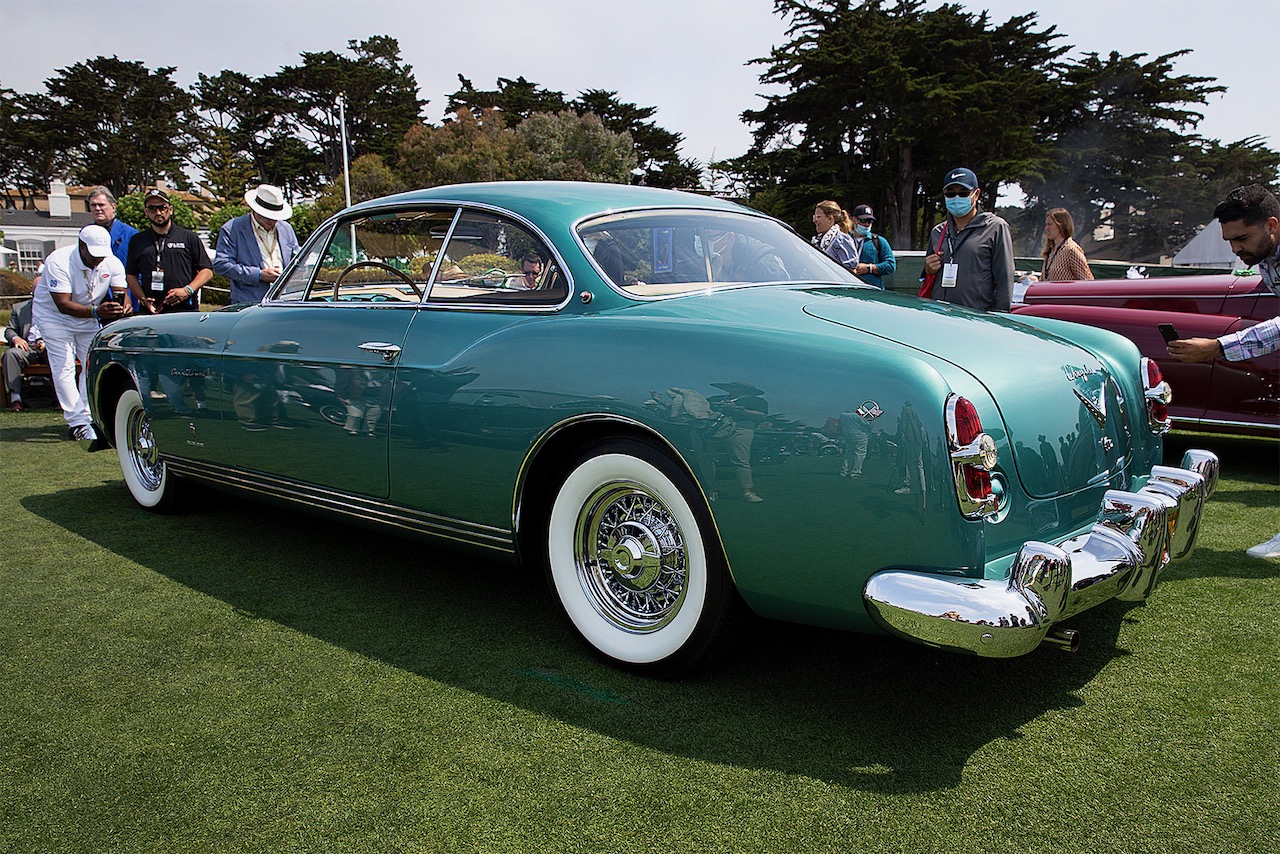 Perhaps you caught a glimpse of this four-seat ’54 Chrysler GS-1 Ghia Coupe purring along Pacific Coast Highway in Thursday’s Tour d’Elegance? I had to wait until Sunday’s Concours to get a close-up look at this 1950s collaboration from Chrysler and Italian coachbuilder Ghia. Powered by a 235 horsepower Hemi V8, this coupe was built on a New Yorker chassis and made its debut at the 1954 Paris Auto Show. 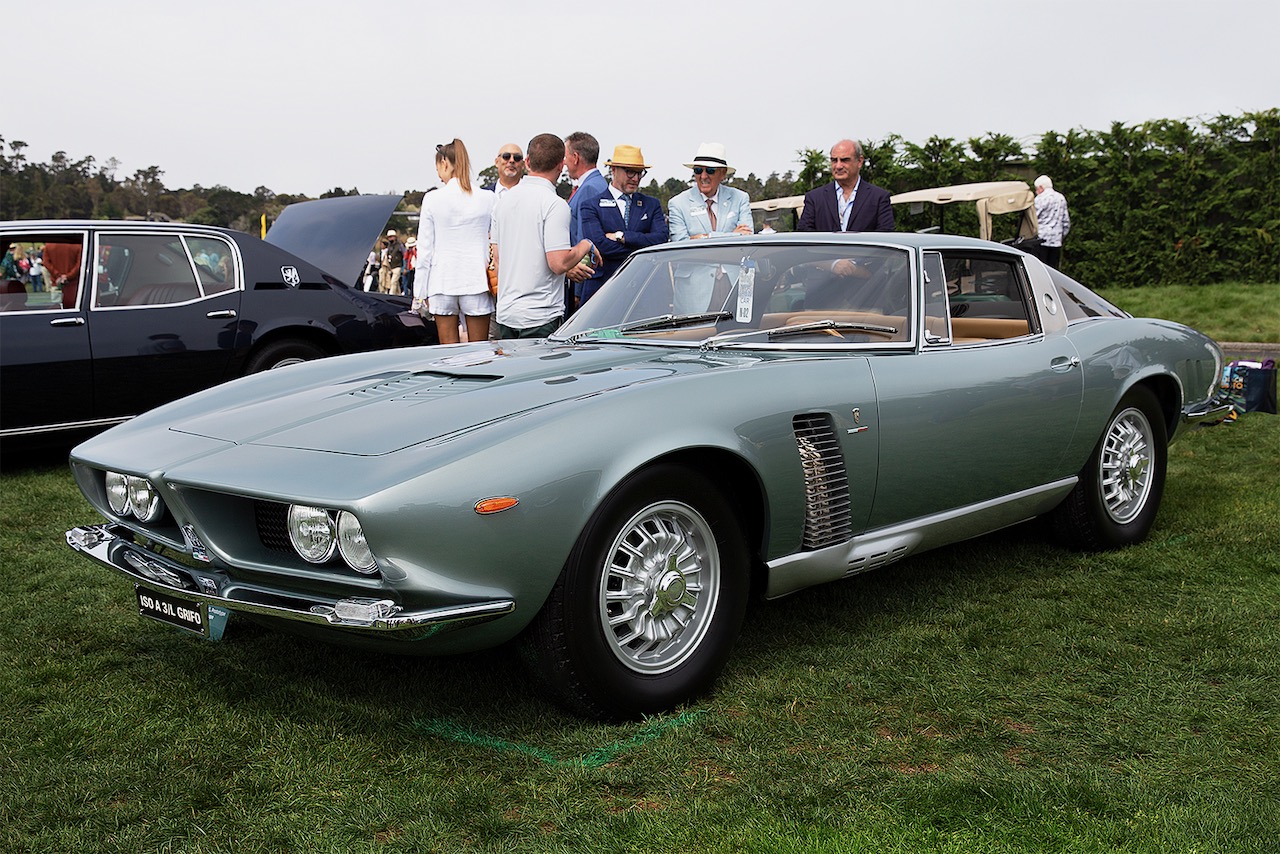 I’ve long been a fan of the Chevy powered Iso Grifo and was really excited to discover Peter Wilde’s gem, the one-off ‘63 Iso Grifo A3/L Prototype Bertone Coupe parked near the back fairway. This historic Iso was exhibited at the 1963 Torino Motor Show and the 1964 New York Auto Show. Its significance did not go unnoticed as it took 1st Place, Class N: ISO at Pebble. 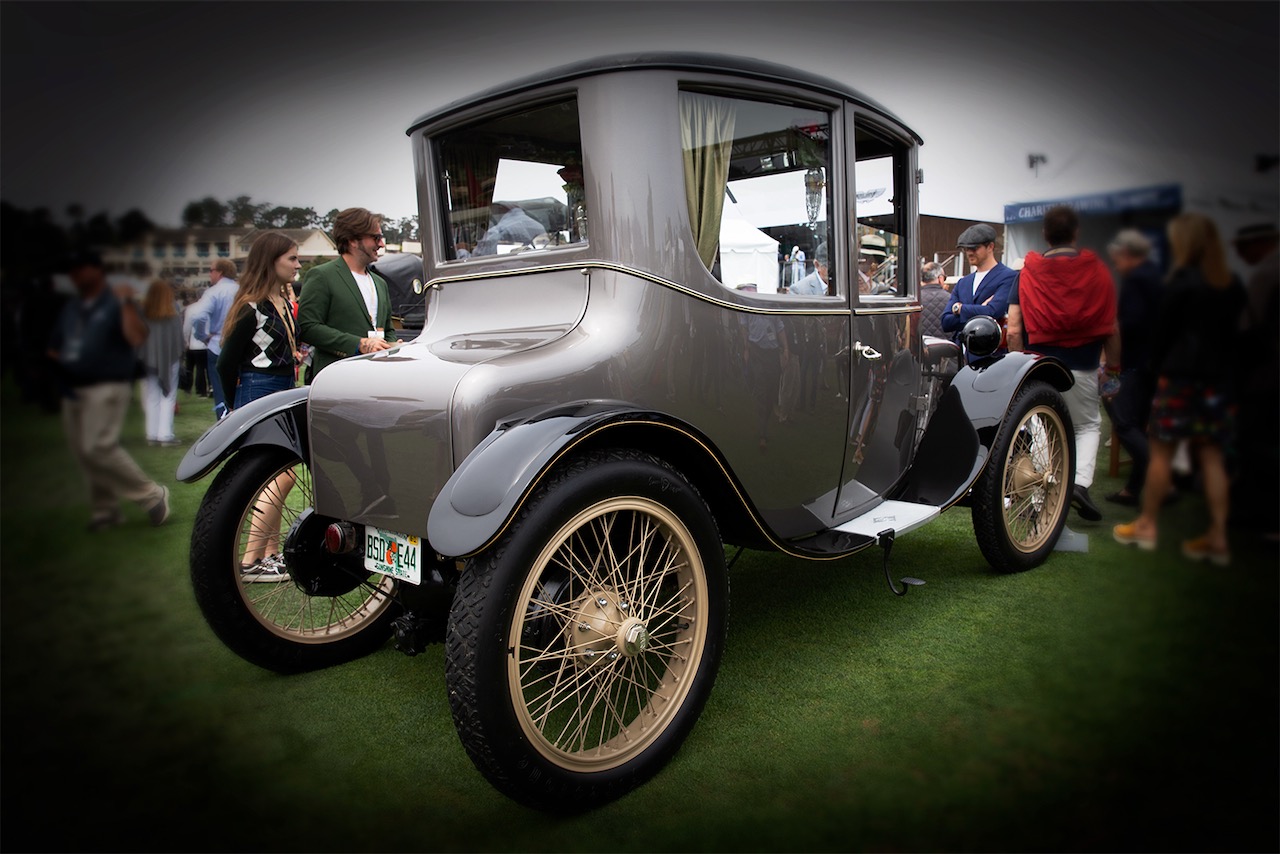 It’s still a bit shocking to learn that the first electric automobiles made their American debut around the 1890s. That’s soooo UnTesla! Fast-forward to 1922 when this six-window Milburn Light Electric 27L Carriage first whirred-up its GE 81-volt, 46-amp motor and rolled out of the Milburn Wagon Company. Here’s another shock: Cost when new, $2,000! 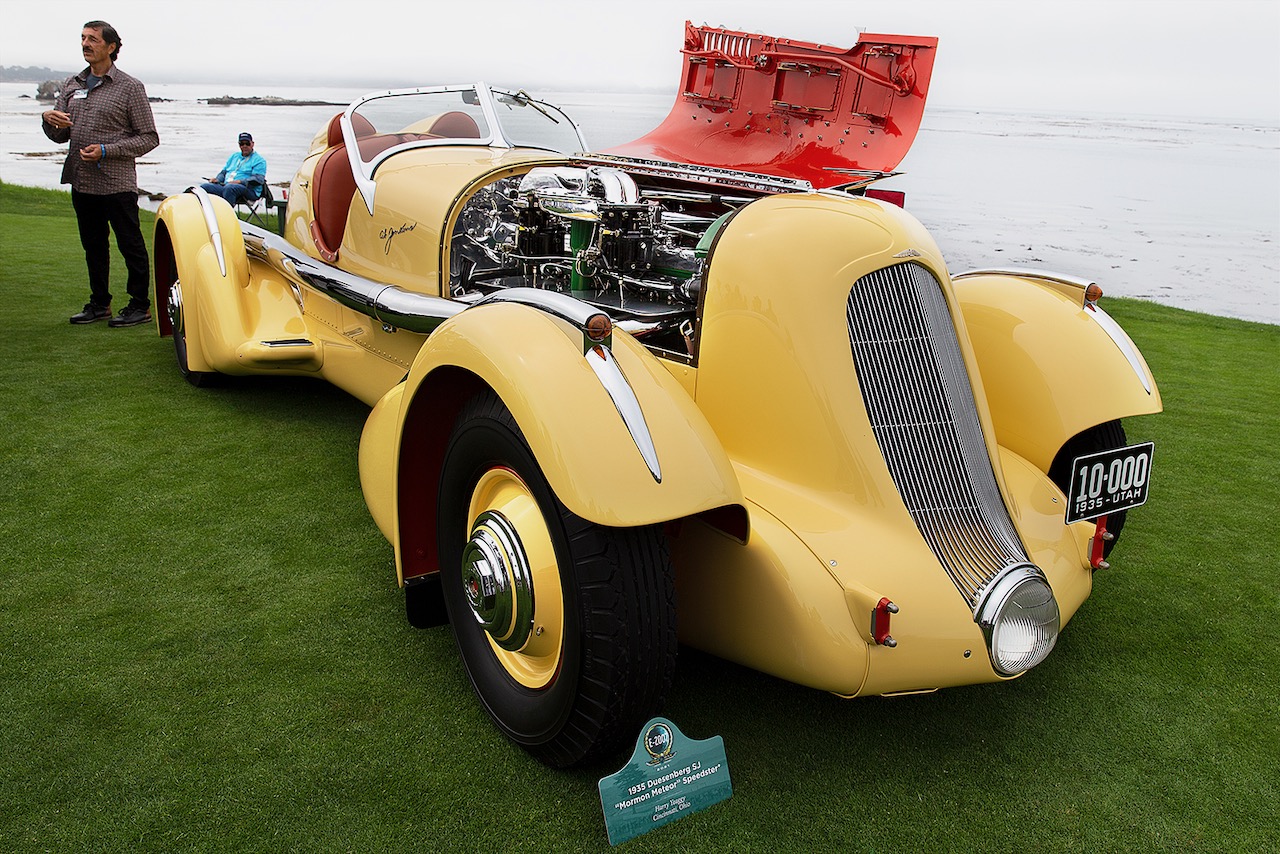 It’s been called the Duesenberg Brothers’ Crowning Achievement. It had a Fred Duesenberg centrifugal supercharger and 320 horsepower Straight Eight. On August 31, 1935 its streamlined yellow fuselage blew past the timers at Bonneville clocking 160 mph with driver Ab Jenkins at the wheel. It’s the ‘35 Duesenberg SJ Mormon Meteor Speedster and it was one of the showstoppers at the Pebble Beach Concours d’Elegance 2021 – and it is indubitably – Automotacular!