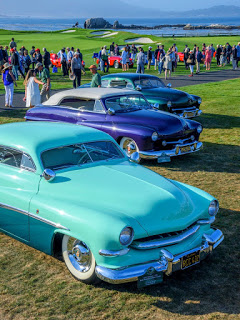 More than half a century after Ken Gross watched the coolest guy at his high school drive down the street in his chopped ’51 Mercury, he put together the first-ever postwar class of Mercury Customs (Class R) to be shown at the Pebble Beach Concours last weekend. A Pebble Beach Selection Committee member as well as Chief Class Judge and automotive journalist, Gross has made it his mission to bring a measure of cool to the18th fairway of Pebble Beach Golf Links.

“Customs of the ’50s were not about speed,” says Gross. “They were about looking good, going slow, and getting the girls. I’m dating myself with this stereotype, but chicks didn’t want to be scared out of their wits and have their hair messed up. They’d much rather look cool in a custom car and cruise the main drag.” 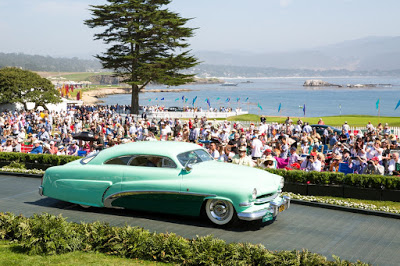 It all began with Sam Barris, who bought a nearly new ‘49 Mercury coupe and started deconstructing and modifying the vehicle until he had customized its way to the cover of Motor Trend. “People were blown away,” says Gross, “by how good the car looked. These custom cars were something special in their era. Part of it was the skill it took to build a really good car, and when someone got it really right, like Barris, the car became absolutely elegant.” 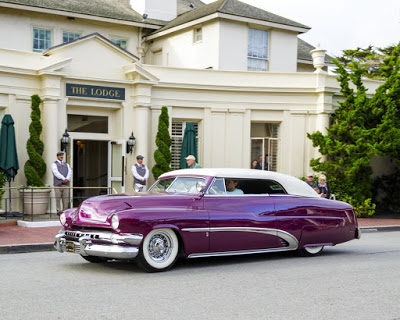 One of the most eye-catching Barris Kustoms (Sam and his brother George soon began spelling their shop, and their creations, with a K) was an arresting lime-green ’51 Merc, customized for Bob Hirohata, which was used in the B movie, Running Wild, with screen siren Mamie van Doren. One of the most recognizable was the mildly customized ’49 Mercury coupe James Dean drove in the 1955 Warner Brothers film, Rebel Without a Cause. 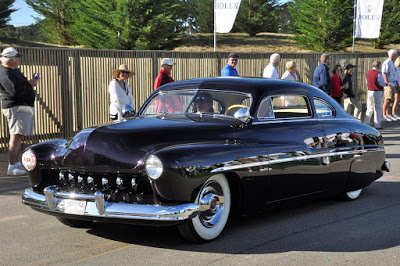