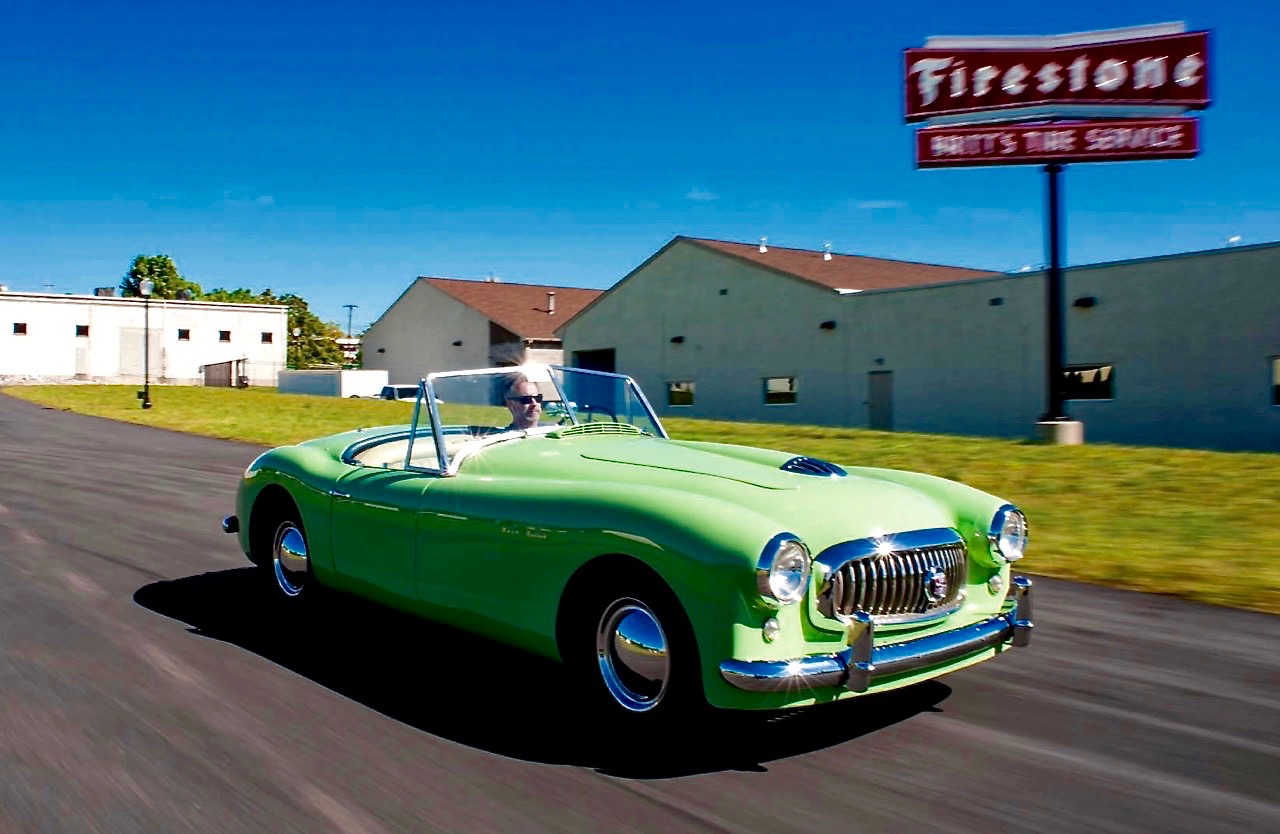 Before there was a Corvette, there was the two-place Nash-Healey produced and marketed for the American market between 1951 and 1954 by Nash-Kelvinator Corporation It utilized the then-new Nash Ambassador powertrain and a European chassis and body, and served as a halo vehicle to promote sales of traditional Nash models. The NASH-HEALEY: FIRST AMERICAN SPORTS CAR was the byproduct of the partnership between Nash-Kelvinator Corporation and British automaker, Donald Healey Motor Company. 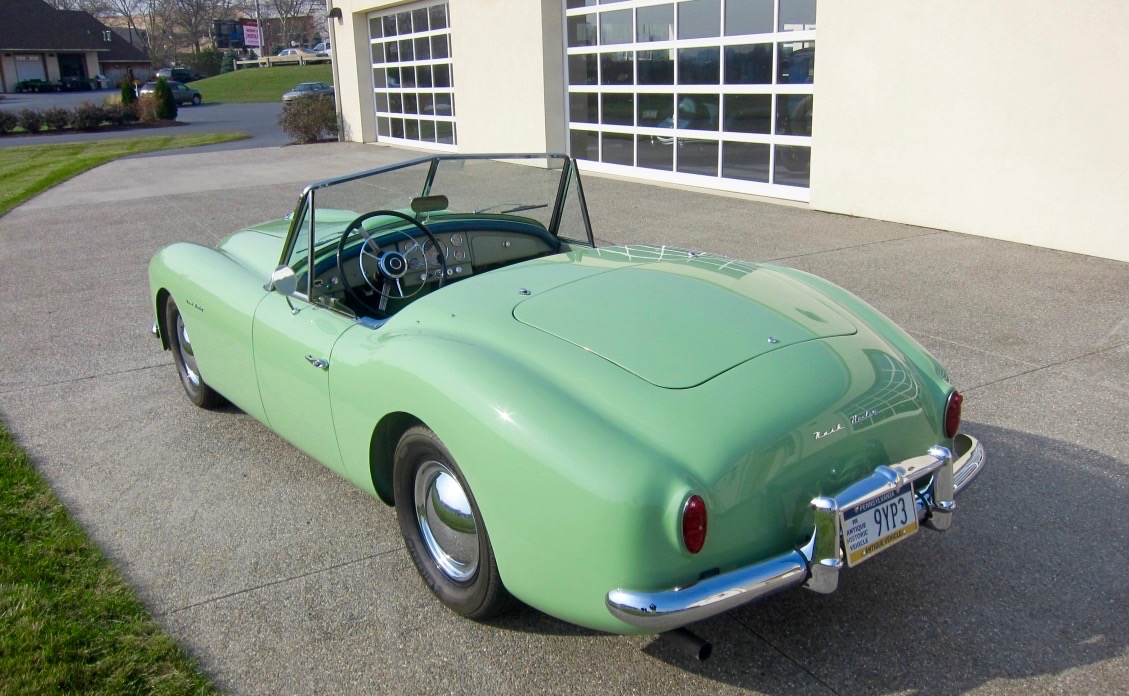 After its initial introduction, the Nash-Healey was restyled by Pininfarina and sub-assembly began in Italy. Just 507 Nash-Healeys were built in the four production years. Donald Healey, president of the Donald Healey Motor Company and Nash-Kelvinator CEO George W. Mason first met on the Queen Elizabeth, while the ocean liner was going from the United States to Great Britain. Healey was returning to England after his failed attempt to purchase engines from Cadillac for his Silverstone sports car. He wanted to expand production of the Silverstone similar to the one that Briggs Cunningham had fitted with Cadillac’s new 1949 overhead-valve V8 engine and displayed at the Miami Auto Show in 1951. Mason and Healey spent a lot of time together during the voyage, resulting in a production plan for a joint-venture sports car. Mason proposed using the Ambassador’s OHV inline six-cylinder engine in a two-seat sports car with Donald Healey supplying body and chassis. Donald Healey with Ben Bowden and acclaimed chassis builder, Achille Sampietro, formed the Donald Healey Motor Company in Warwick, England in 1945 to build high-performance sports cars. 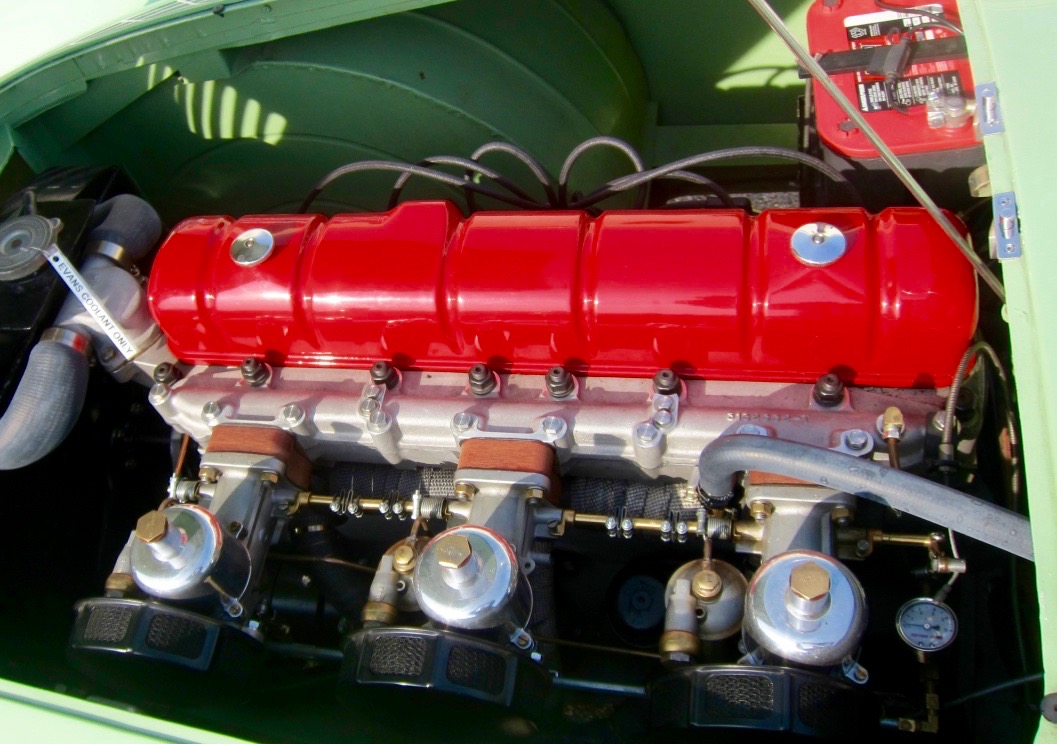 The ‘51 Nash-Healey was the first post-war production sports car from a major American automaker, beating out Chevrolet’s Corvette introduced in 1953. Earlier Kurtis-Kraft and the Muntz Jet sports/sporty cars were very limited production, niche market vehicles, not true production cars. A 235 cubic-inch Ambassador Six engine, three-speed Borg-Warner overdrive manual transmission, plus torque tube and differential made up the new sports car’s powertrain. With a bore of 3.375 inches and stroke of 4.375 inches, the 7.3-to-1 compression Six was originally fitted with a single Carter one-barrel carburetor. Healey replaced the stock cast-iron head with a lighter, higher-compression aluminum head with twin side-draft SU carburetors typically used on period British sports cars. This increased power from the stock 115 to 125 horsepower. Compared to other contemporary British sports cars, the Nash-Healey’s engine was long, heavy, and bulky. 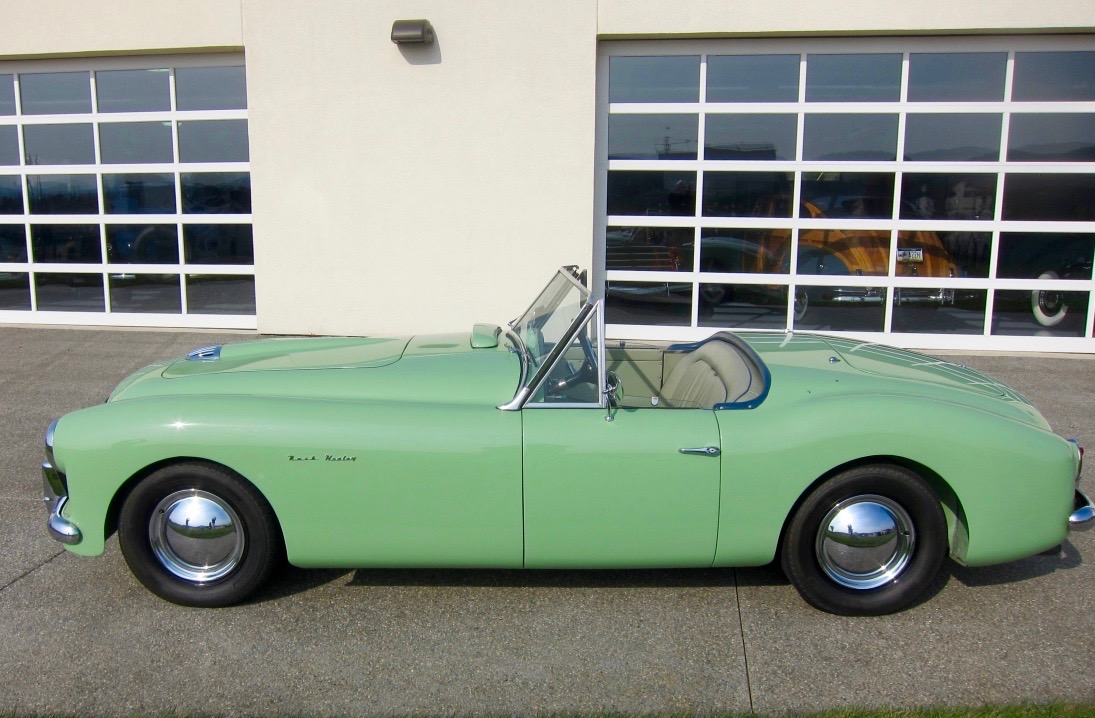 Donald Healey’s original plan was to use an even heavier 331-cubic-inch Cadillac V8 engine and the car was designed with an engine bay that allowed owners to convert their cars to V8 power. The Nash-Healey’s ladder type steel chassis was originally designed by Achille Sampietro for the Healey Silverstone and was widened and reinforced for the Nash-Healey. As far as the suspension was concerned, both Healey and Nash supplied components. Up front is Healey Silverstone trailing link independent suspension with coil springs and sway bar. The rear suspension featured Nash’s solid axle rear end and coil springs (in place of Silverstone leaf springs), located by a Panhard rod. 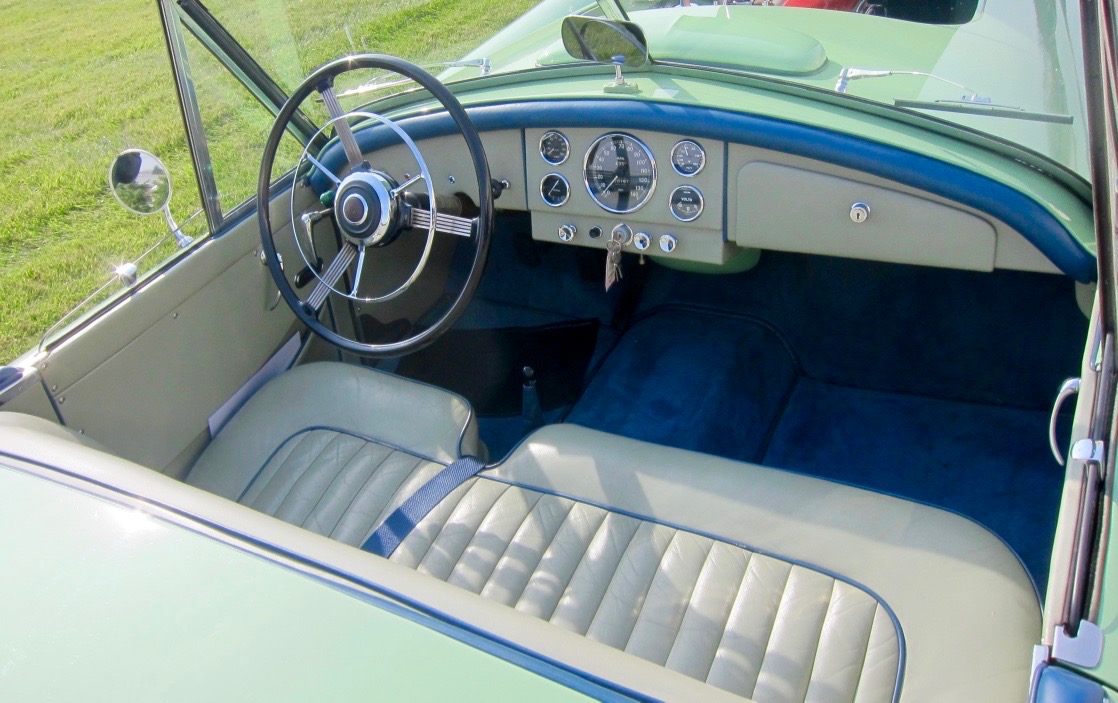 The Nash-Healey’s interior featured luxurious leather upholstery, foam rubber cushions, adjustable steering wheel, and a cigarette lighter that was optional on some cars. Completed vehicles were shipped to the United States for sale through the existing Nash dealership network.

A prototype was shown at the Paris Motor Show in September 1950; the production model debuted at the February 1951 Chicago Auto Show. Popular British singer Petula Clark was the recipient of the first production Nash-Healey, gifted by Donald Healey. When first displayed at an auto show it had a proposed price of $3,767, later climbing to an actual MSRP in excess of $5,850. Sales never took off due to the cost.

Donald Healey and his son Geoffrey drove the prototype ’50 Nash-Healey to Italy and entered it the legendary Mille Miglia. In 1952, they finished first in class at the Mille Miglia. A Nash-Healey served as the “course” car for the 1951 Carrera Panamericana (Mexican Road Race). Driven by Chuck Stevenson, the Nash-Healey ran ahead of the racers to ensure the way was clear on one of the most dangerous road races in the world. Stevenson went on to win the Carrera Panamericana in 1953, driving a Bill Stroppe-prepared Lincoln Capri. He led the team to a 1-2-3 Lincoln win! 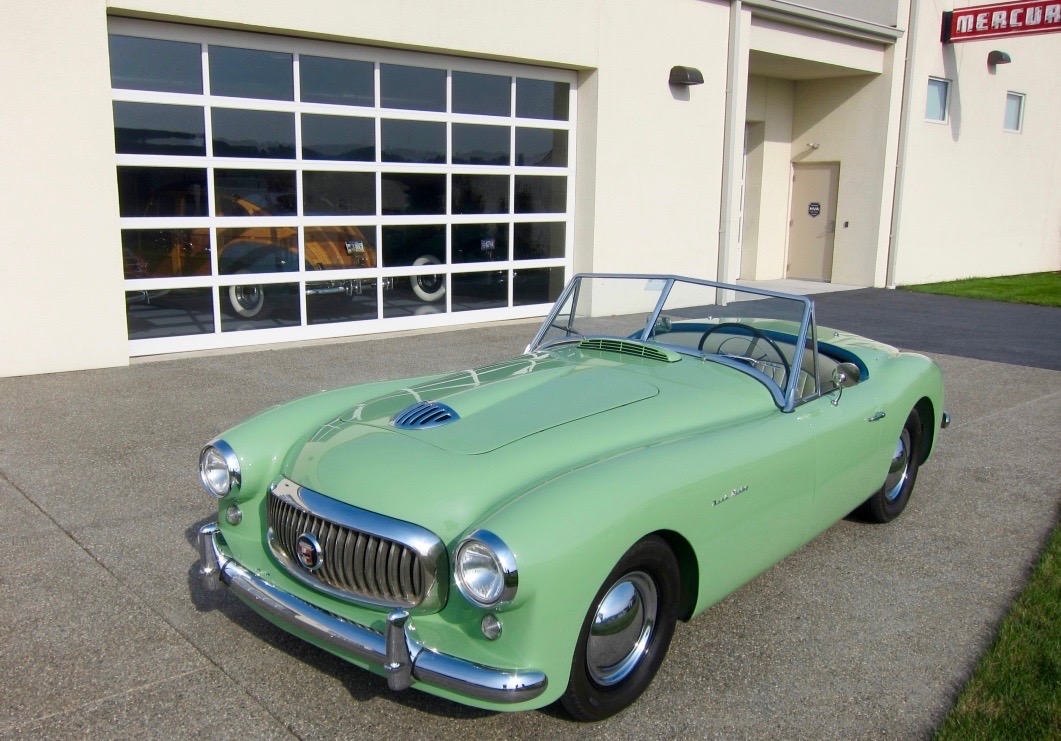 Tony Rolt and Duncan Hamilton debuted the prototype at the 24 Hours of Le Mans in 1950. Not only was the car one of the 29 finishers from the field of 66, it finished in an impressive fourth place. This outstanding achievement sealed Healey’s contract with Nash for a limited production run of the road cars.

In 1951, Rolt, Hamilton and Nash-Healey returned to Le Mans, finishing sixth overall. Back again in 1952, the Nash-Healey team finished third overall and second in the Index of Performance. Considering the competition at the 24 Hours of Le Mans over three years, between 1950 and 1952, the Nash-Healey delivered incredible performance and reliability for a “new” brand and car. The actual Nash-Healey Le Mans racecars were lightened and fitted with a streamlined alloy bodies; horsepower was up around 200!

Mechanix Illustrated’s legendary road-tester “Uncle Tom” McCahill, who invented “0 to 60 mph” testing and comparisons, said that he had “never driven a sports car that handled better or gave the driver so much control.” McCahill is considered the Dean of automotive writers. 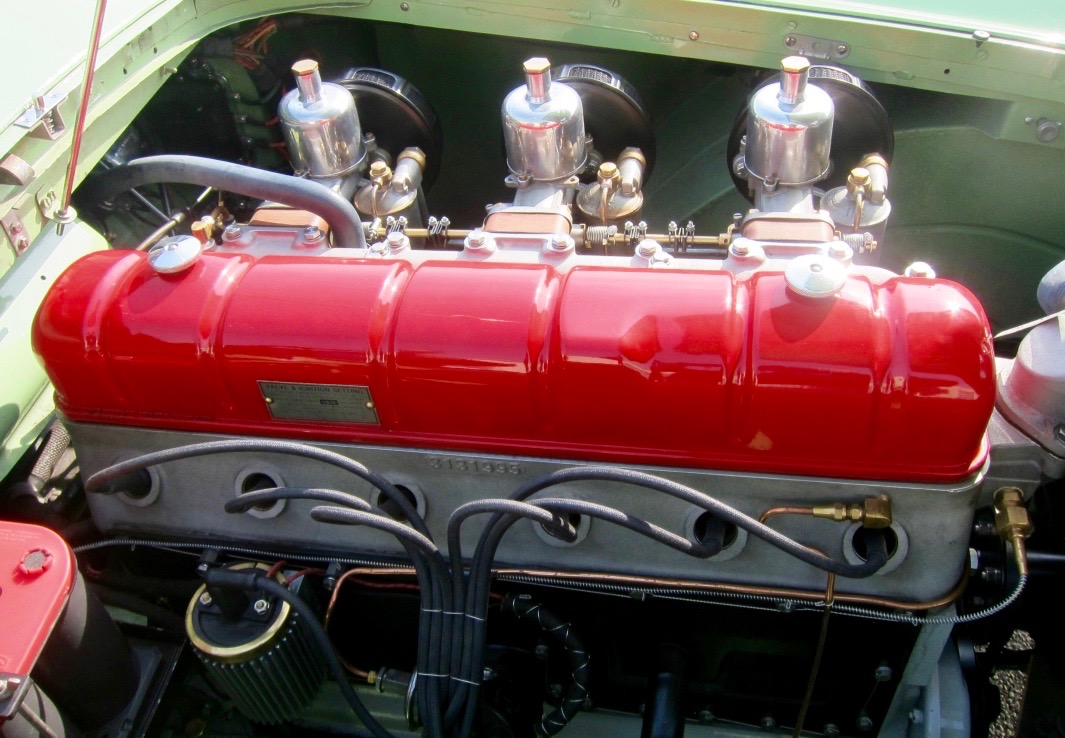 Professionally restored, the Nash-Healey Le Mans Roadster featured here is finished in Mint Green (one of three known in this color) with a tan cloth top and a gray interior with blue piping. It is also equipped with Cibie quartz-iodine headlights, correct Nash-Healey wheel covers and pull-up side windows. It retains the correct Nash engine fitted with a limited-production optional high-compression aluminum head and three SU carbs. Factory-fitted with a three-speed manual transmission with overdrive, this Le Mans Roadster also features full instrumentation, a heater, spare tire and jack.