Skip to content
Chrysler celebrates the golden anniversary of the 426-inch Hemi, an engine that has been ‘rewriting’ drag strip, circle track & Bonneville record books for 50 years! 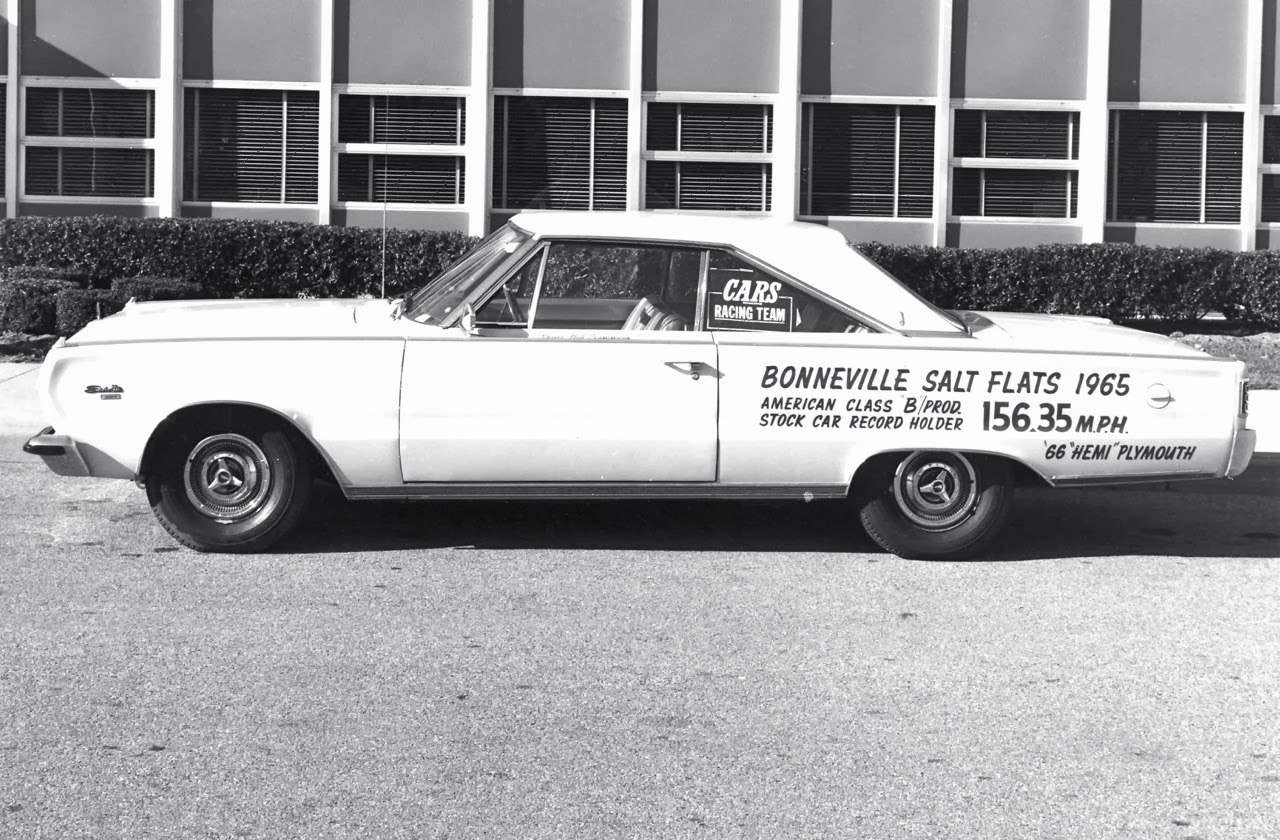 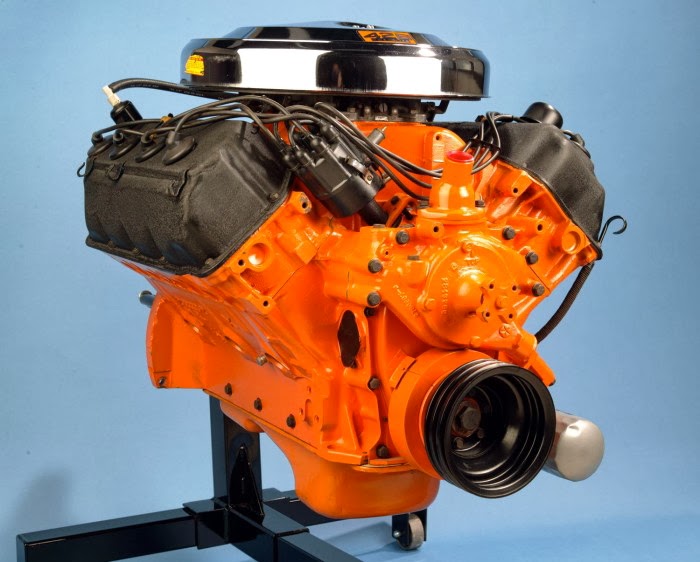 “Mopar is proud to mark the 50th anniversary of the introduction of the Gen II 426 HEMI, a revolutionary engine that inspired a long line of quality products in our brand’s portfolio,” said Pietro Gorlier, President and CEO — Mopar, Chrysler Group LLC. “The 426 HEMI is such a vital part of our heritage and a key ingredient in helping make Mopar what it is today. The success of the Race HEMI launched a unique brand of sought after muscle cars that had fans began to refer to as Mopars, and that is something we are very proud of.” 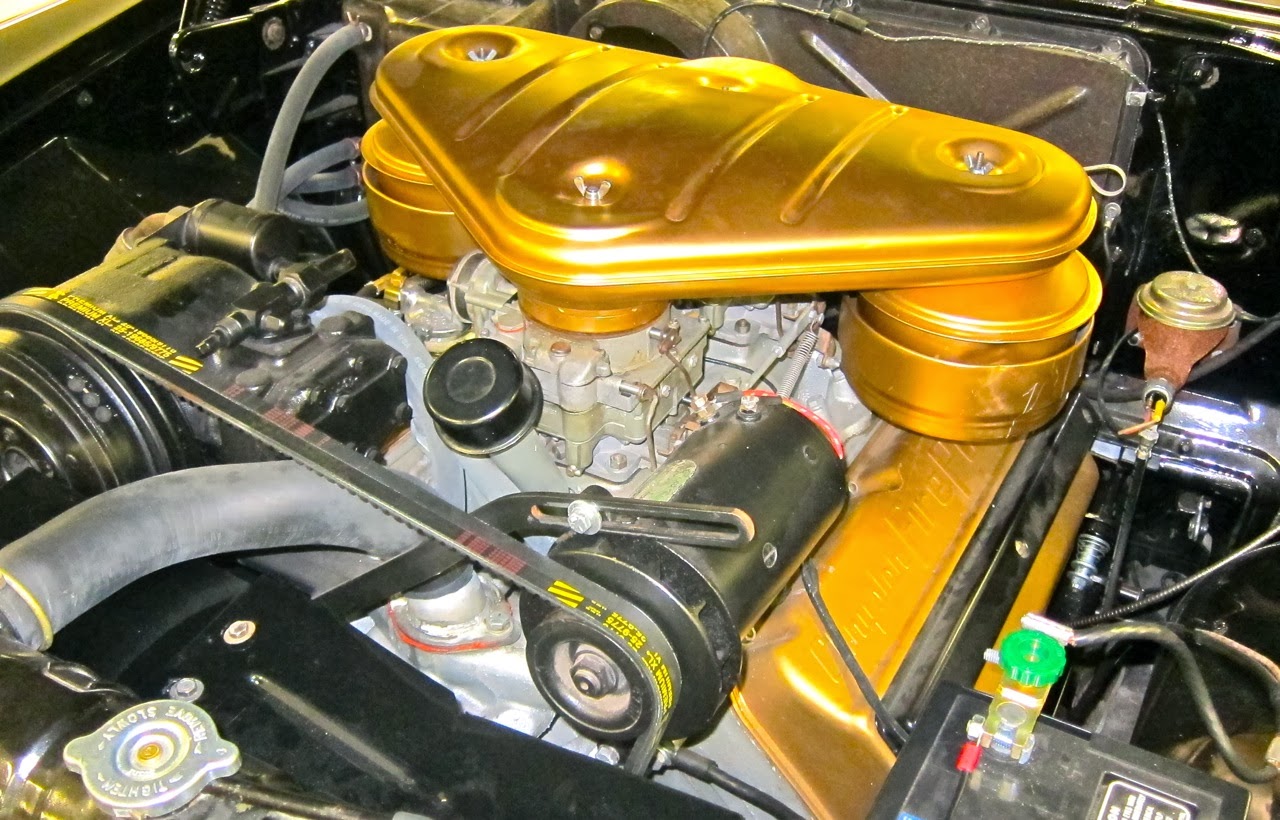 While Chrysler engineers initially introduced the original hemispherical combustion engine design for passenger cars in 1951, above, 354-inch Hemi, ’56 Chrysler 300, and celebrated its
60th anniversary in 2011, the iconic and revolutionary second generation HEMI engine,
so closely associated with the muscle car era, made its memorable debut in 1964.  Below, 331-inch injected Hemi in track car. 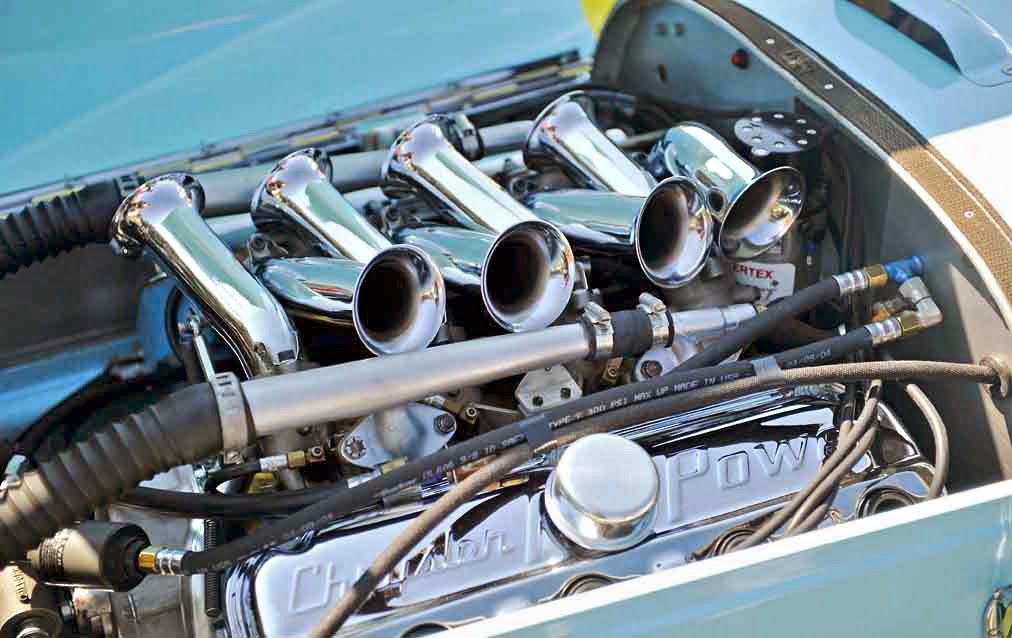 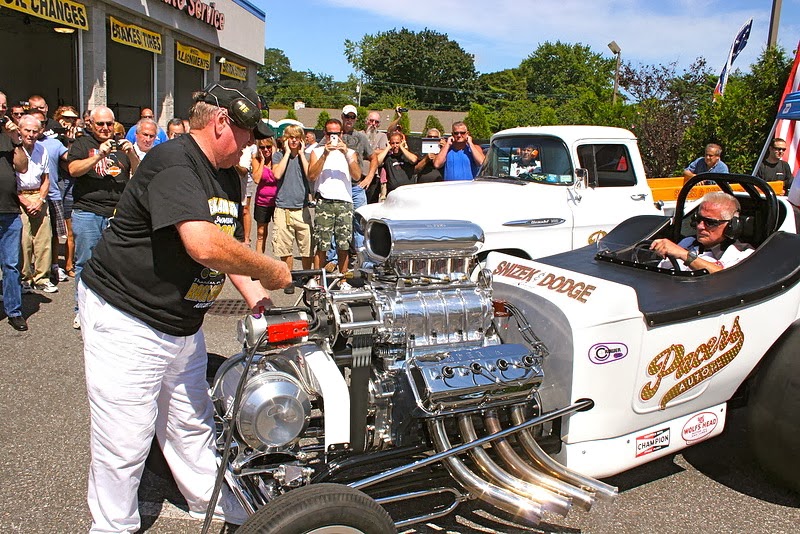 The Gen II 426 Race HEMI was first introduced at the Daytona 500 in February 1964 with legendary driver Richard Petty winning the race handily in his Plymouth, while a dominating performance by three other HEMI-powered entries gave four of the top five finishing positions to the new powerplant. Petty drove to eight victories and earned the NASCAR championship in 1964 with HEMI-powered cars amassing a total of 26 race wins. The HEMI used for the season was rated at 400 horsepower and had a compression ratio of 12.5-to-1.  That same year in NHRA drag racing competition, Don Garlits broke the 200-mph barrier in the Dodge Gen II 426 Race HEMI-powered fuel dragster, clocking 201.34 mph in 7.78 seconds!

For the following season, NASCAR’s sanctioning body changed the rules mandating that all engines used for its races must be available in production vehicles. This led to the withdrawal from NASCAR competition for the 1965 season and saw Chrysler engineers concentrate their efforts in drag racing.

A new lighter drag racing package, referred to as A-990, debuted in NHRA Super/Stock in 1965 in Dodge and Plymouth vehicles. This led to altered wheelbase Hemi cars running in A & B/FX (Factory Experimental), morphing into fiberglass-bodied, tube-framed, fuel-burning Funny Cars. To this day, versions of the HEMI still power every Funny Car and Top Fuel dragster, regardless of being badged by other manufacturers. 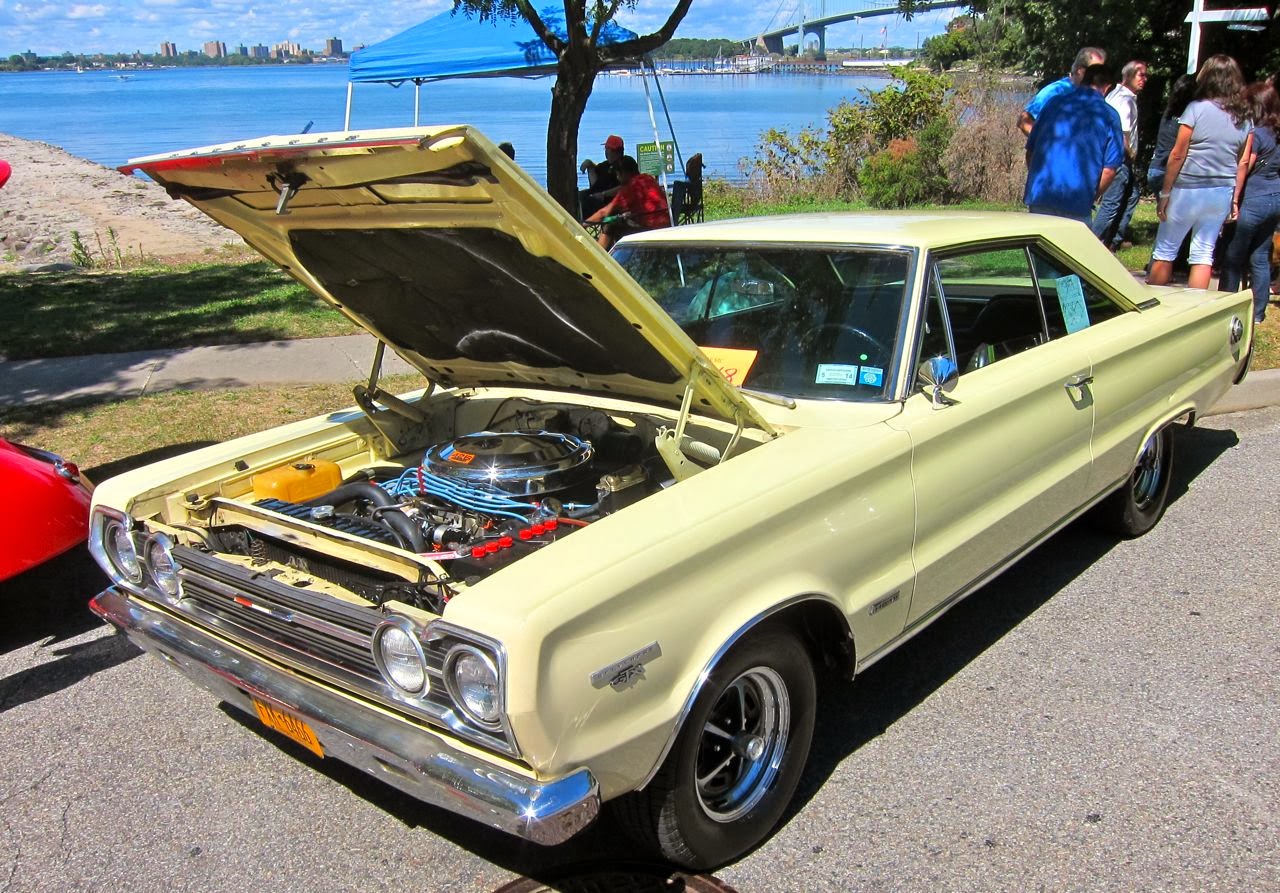 With the introduction of the 426 “Street” HEMI in 1966 for production vehicles, the HEMI made a return to NASCAR. During the next several years, vehicles with HEMI engines won countless races, numerous championships in various professional categories and were feared by competitors.   ’67 Plymouth 426/425 Street Hemi GTX, above.

With the availability of a 426 Street HEMI, Chrysler no longer offered a special drag racing engine. Instead, drag racers were provided with the street version, which they could modify
at their discretion. The only exception was the limited-edition Hurst-built ‘68 Dodge Darts
and Plymouth Barracudas, below, powered by dual-quad 426 Race HEMIs, with
only 75 of each model produced to be legal in NHRA. 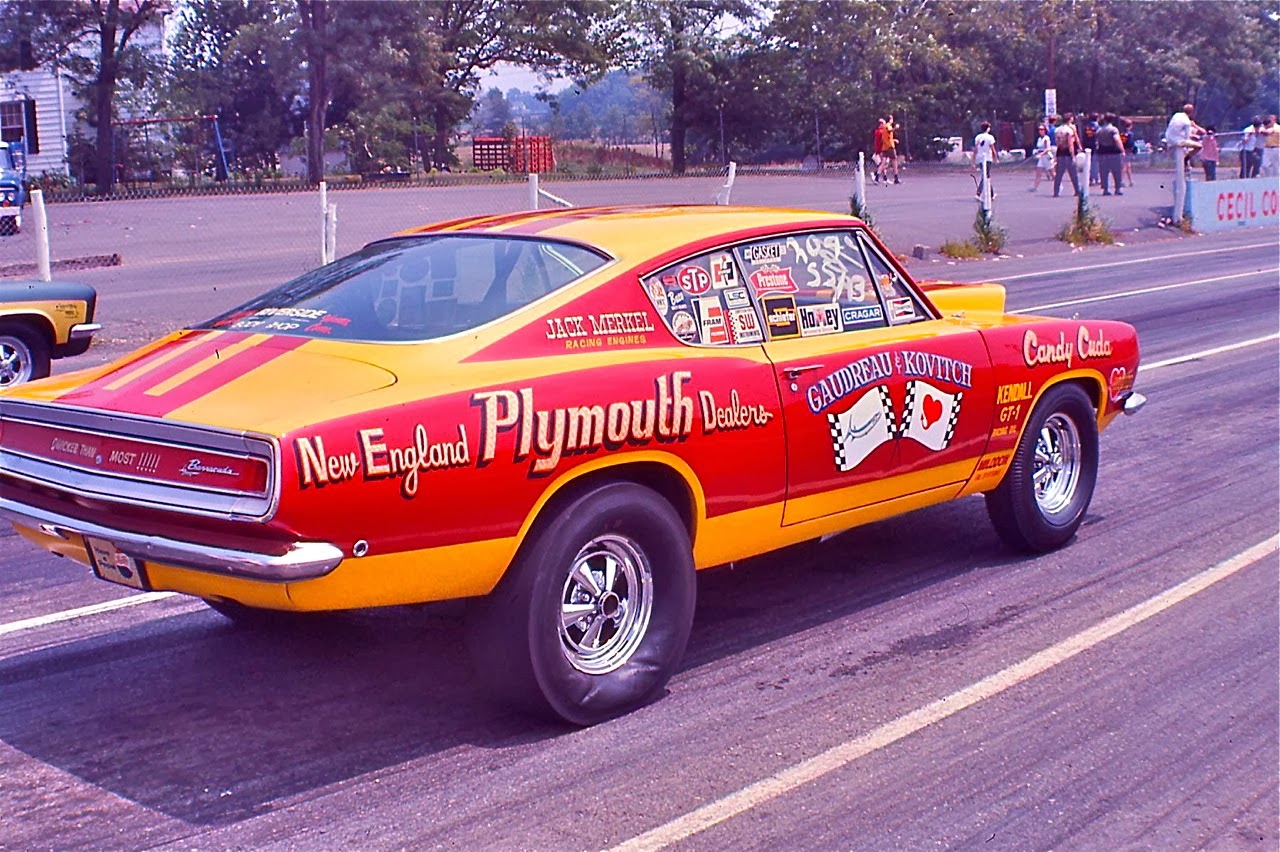 The heritage of those special vehicles is celebrated each year by Mopar with the HEMI Challenge that takes place in the Sportsman class at NHRA’s prestigious U.S. Nationals in Indianapolis. The HEMI Challenge made its debut in 2001 and features these classic muscle cars, which contributed to the brand’s legendary reputation and success at the drag strip.

In anticipation of the 50th anniversary of the 426 Race HEMI engine, Mopar also established the “Tom Hoover Sportsman Challenge” at the start of the 2013 season. A winner is selected from the Sportsman Stock or Super/Stock classes by amassing the most points during the season in a Chrysler Group vehicle during NHRA sanctioned races nationwide.

Since its 1964 debut, the Gen II 426 HEMI remains a legend due to its performance reputation on and off the racetrack, the dedication and skill that Chrysler engineers put into it, as well as its rarity since availability was discontinued in production vehicles in 1971.

The innovative engine’s offspring live on, not only in Funny Cars and Top Fuel Dragsters, but also within both new production and classic heritage vehicles thanks to the availability of current day products and crate engines.

To mark the 50th anniversary celebration, and complement the availability and continued development of these engines, a unique product line of HEMI merchandise. This new product line features the HEMI 50th anniversary logo and will include items such as clothing, decorative lighting, clocks, a pub table, stools, and much more. Check it out at https://www.wearmopar.com/wear-mopar/index.htm

For everything you have always wanted to know about Hemis, please visit
http://www.allpar.com/mopar/hemi/chrysler-hemi.html