How do you do it? How do you pick just twenty cars from two of the highest-profile Monterey Car Week events – the 69th Pebble Beach Concours d’Elegance and The Quail, A Motorsports Gathering – now in its 17th year? It’s a daunting task, much worse than selecting your favorite faux meat snack or all-time best action hero. But car guys do what they gotta do: MONTEREY MADNESS: PEBBLE & THE QUAIL!

So I started by admitting to myself that my picks will be unapologetic-ally subjective. They will not be based on the standard criterion of rarity, value, provenance or prior accolades. These will simply be cars that made me do a double take as I walked the show fields, cars that made me smile and say, Wow! Or, cars that gave me goosebumps and made me shout, Let’s fire this baby up!

This year there were 216 cars from 17 countries at Pebble Beach; 250 cars and 6,000 attendees at The Quail. A ‘31 Bentley 8 Litre Gurney Nutting Sports Tourer took the prestigious Best of Show award at Pebble and, a ‘31 Stutz DV ‘32 Convertible Victoria by Le Baron top honors at The Quail. Both events featured special tributes to Bentley, highlighting 100 years of this iconic motorcar’s history. In addition to pre and post-war classics, both events also presented the latest offerings and concepts from  Aston Martin, Bentley, Bugatti, Lotus, Lamborghini, McLaren and Porsche. MONTEREY MADNESS: PEBBLE & THE QUAIL!

If somehow all of this wasn’t fun enough for attendees, the Petersen Automotive Museum brought a high-profile collection of Hollywood cars to The Quail. And, Pebble brought back their alternate-year Historic Hot Rod Class – which included vintage Hot Rod Cover Cars like the Kookie Kar from the TV show 77 Sunset Strip and Big Daddy Ed Roth’s The Outlaw roadster – which was featured on the cover of Car Craft in 1960! On to MONTEREY MADNESS: PEBBLE & THE QUAIL!

Sitting pretty, by the Bay at Pebble Beach. If you are as influential and affluent as Ralph Lauren you can change the color of your very rare, light blue ‘33 Type 59 Grand Prix Bugatti, top, to Raven Black without ruffling too many Car Guy feathers. This Type 59 was one of four on special loan and display at the Concours d’Elegance. 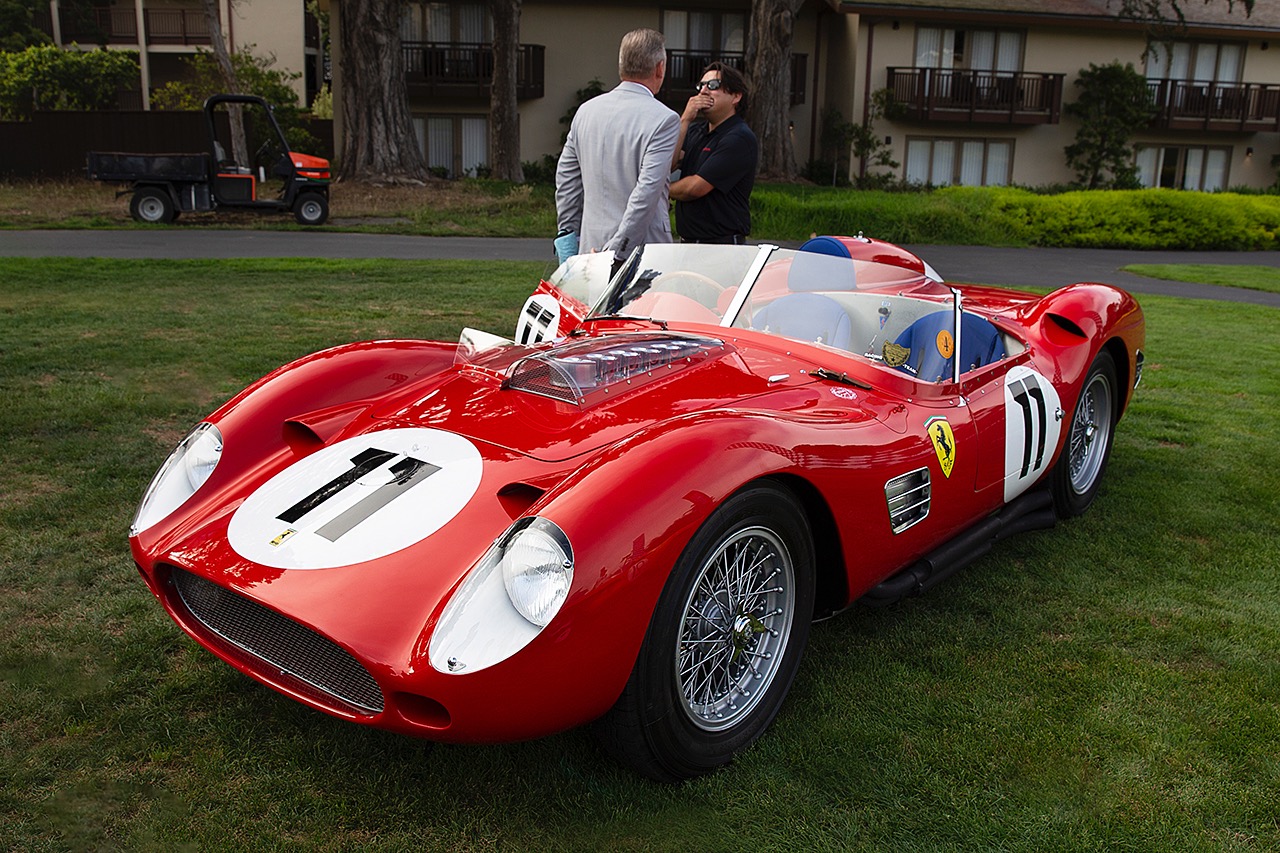 It was early Sunday morning and I was making my way towards the show field when I spotted No.11 on an upper terrace. This was the first of many Wow moments at Pebble Beach and it was a big WOW! Ferrari Chassis No. 0774, the last of five 250 TR59s built in 1959. V12. Rich race history. Driven by Behra, Gurney, Hill and Frére. Beautiful. Priceless. Right here under my nose! 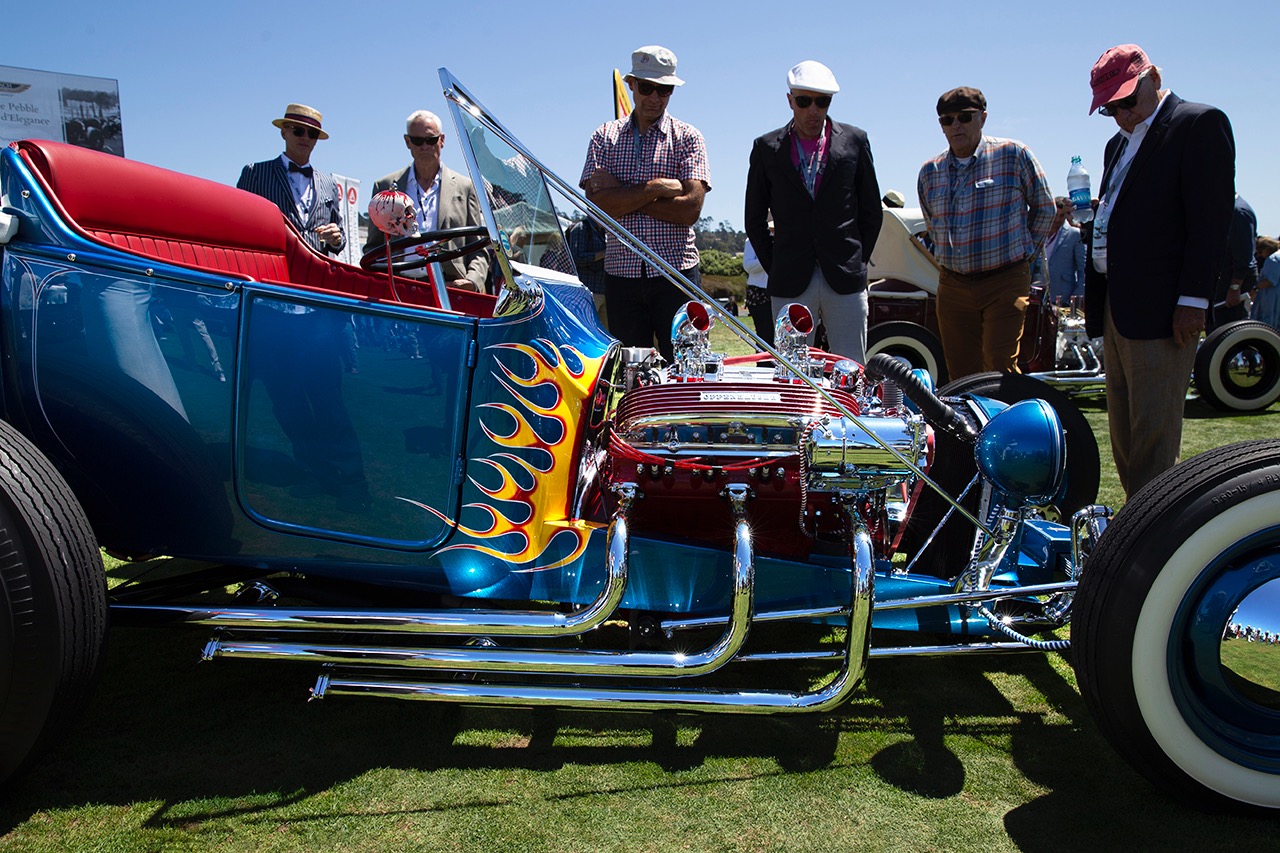 This squad of heads-bowed Concours goers are not mourning the fiery death of the Kookie Kar’s four-carb Caddy engine, rather, they are somewhat speechless that the infamous Norm Grabowski ’22 Ford ‘T’ hot rod has finally made it to the rarefied field at Pebble Beach. Thanks to the good folks at the Petersen Automotive Museum for bringing their Hot Rod Cover Cars to the show. 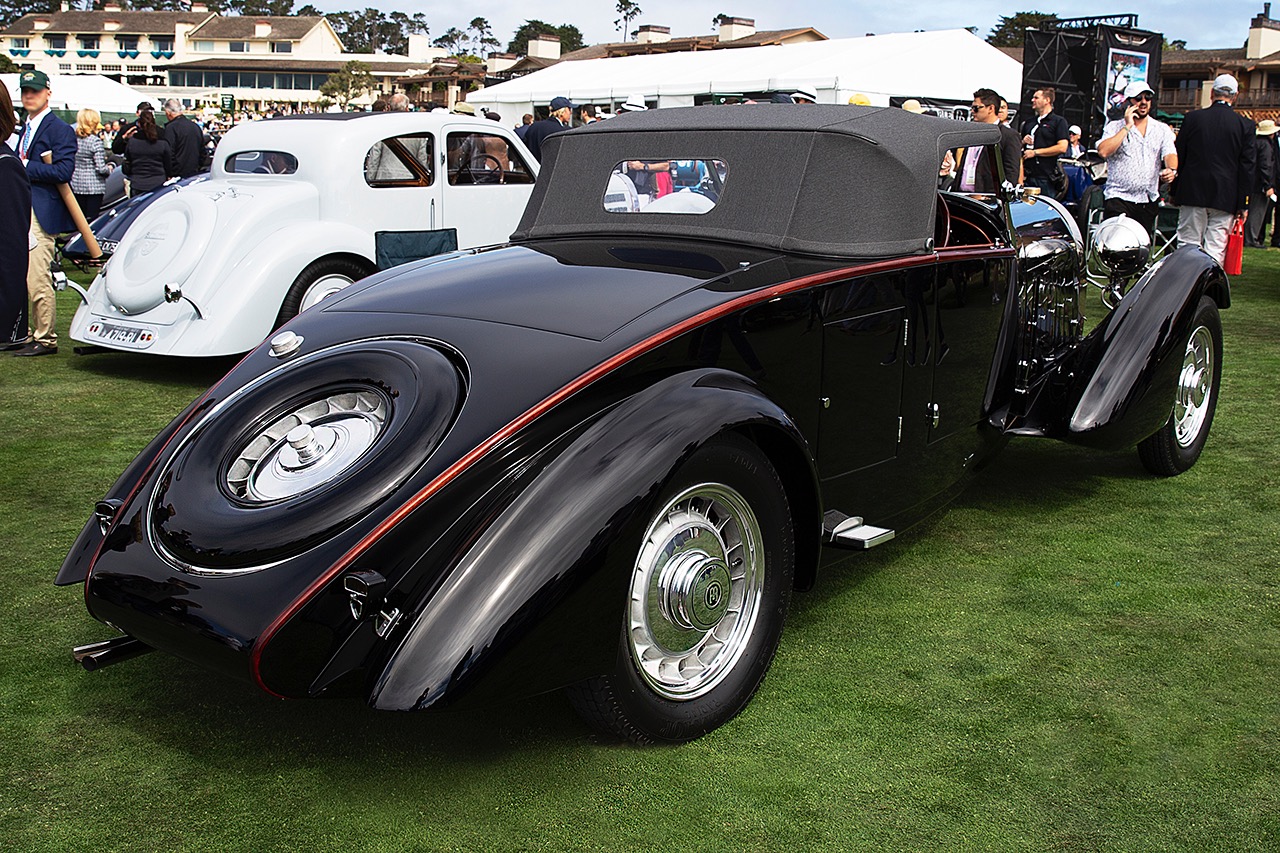 I had taken a few shots of this sleek ’32 Bugatti Type 49 Labourdette Roadster when I struck up a conversation with a friend of its owner, Sam Mann. “I love how it looks kind of like a hot rod” I gushed, and he looked at me and said, with a certainly-you-know-this tone, “Well yeah, Bugatti was a hot rodder.” I guess, in a sense, he was! 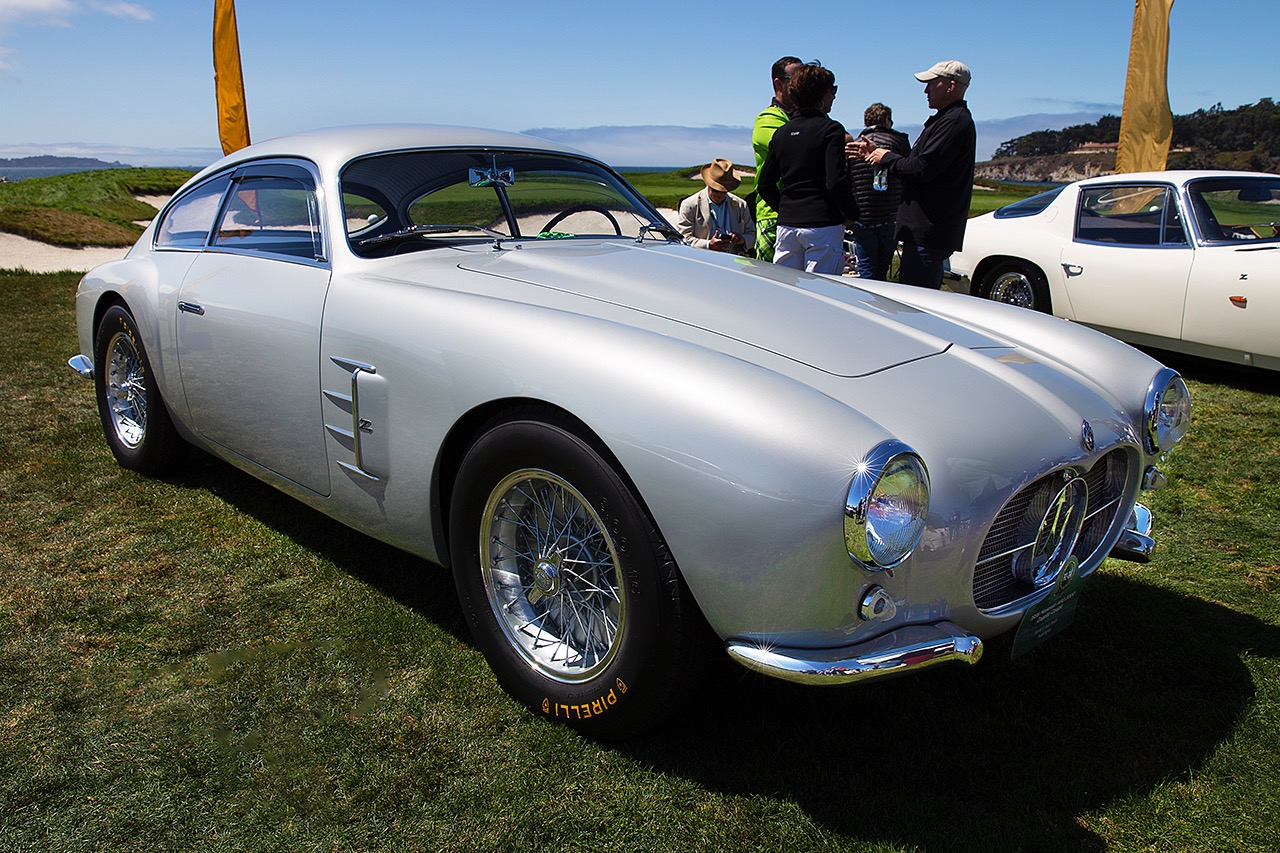 Celebrating its Centennial Anniversary at the Pebble Beach Concours along with Bentley was Milan-based Carrozzeria Zagato. Founder Ugo Zagato had spent the early 1900s working in the aeronautical industry and the company today, headed by Andrea Zagato, continues to be influenced by aero design and manufacturing precepts. The wind-caressed design of this ‘56 Maserati A6G 2000 Zagato Coupé certainly helped in lifting it to a 3rd Place finish in the Postwar P-2 class. 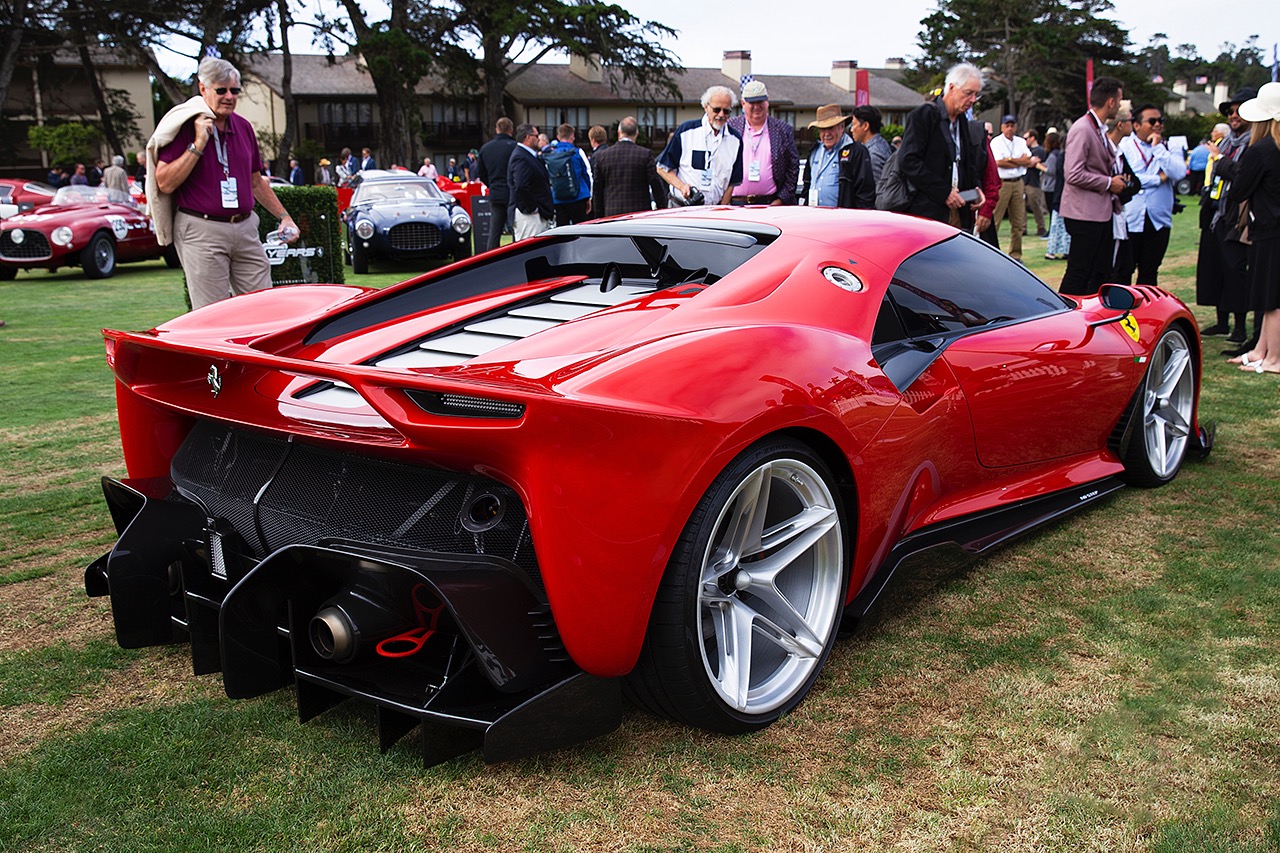 Another distraction on the upper terrace entryway at Pebble Beach was this ‘19 Ferrari P80/C. In development since 2015, Ferrari’s Special Projects unit built this one-off Supercar. Described as a beefed-up 488 GTB, the P80/C is powered by a 700+horsepower 3.9-litre V8 and can play nasty at speeds up in the 200+ mph zone. 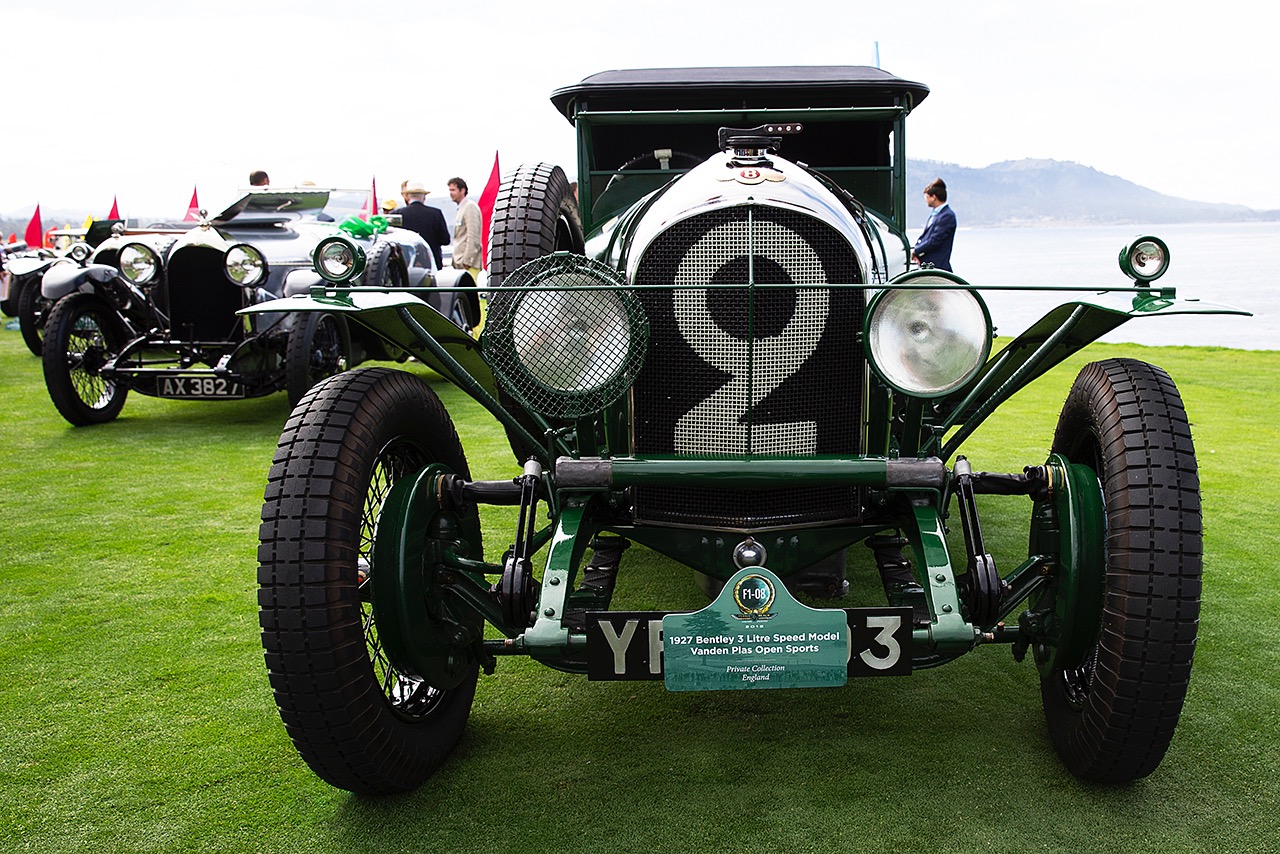 A formidable fleet of Bentleys appeared at water’s edge as the morning fog lifted from the Pacific. In lead position was this ’27 Bentley 3 Litre Speed Model Vanden Plas Open Sports. Fitting, as this brawny Brit took 1st Place in the Bentley Centennial 3 Litre F-1 Class at Pebble Beach. 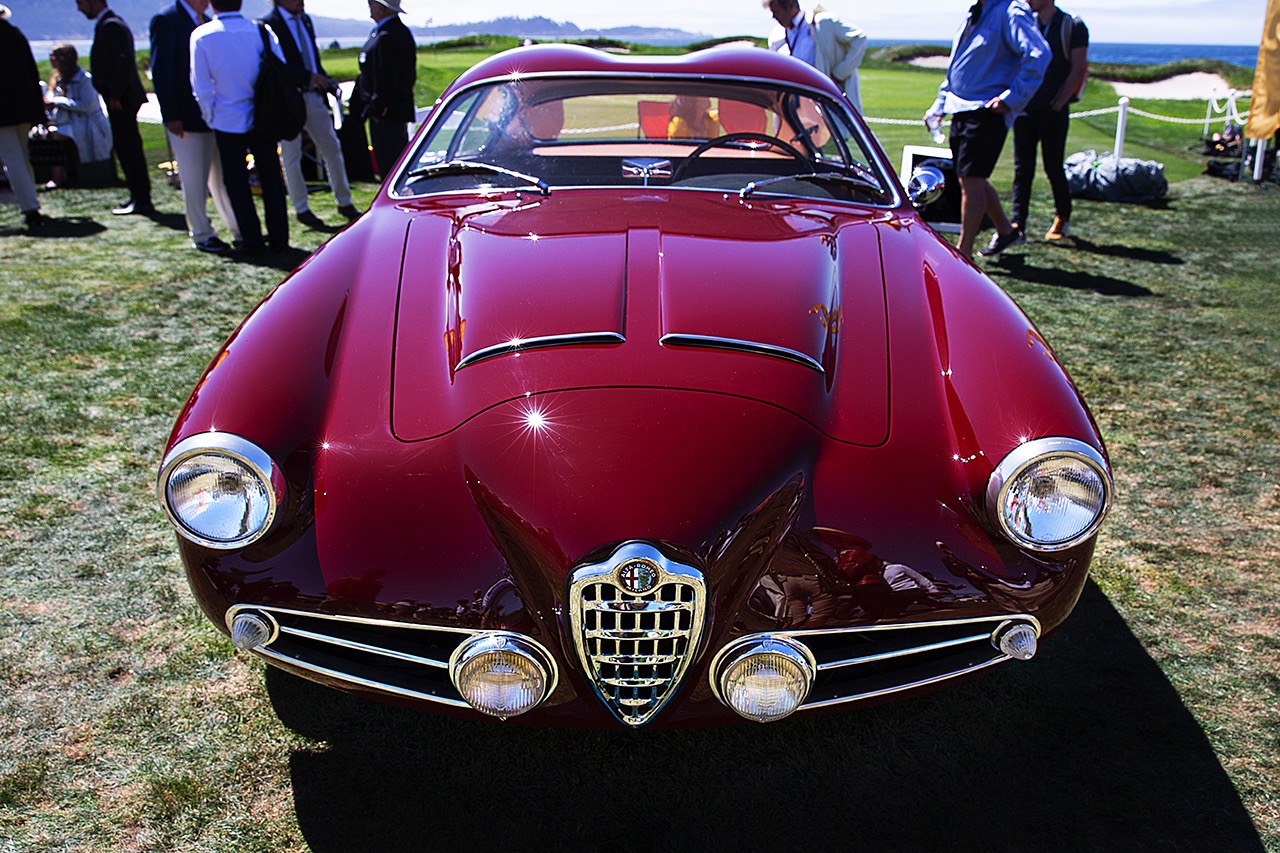 Since 1919, Zagato coachbuilders have designed more than 440 models in association with 44 automotive brands – including Lancia, Alfa Romeo, Porsche, Ferrari, Aston Martin, Fiat, Diatto, Maserati, and Jaguar. We’ll allow this ‘57 Alfa Romeo 1900 CSS Zagato Coupé to take a bow at Pebble Beach for all things light and beautiful; all things Zagato. 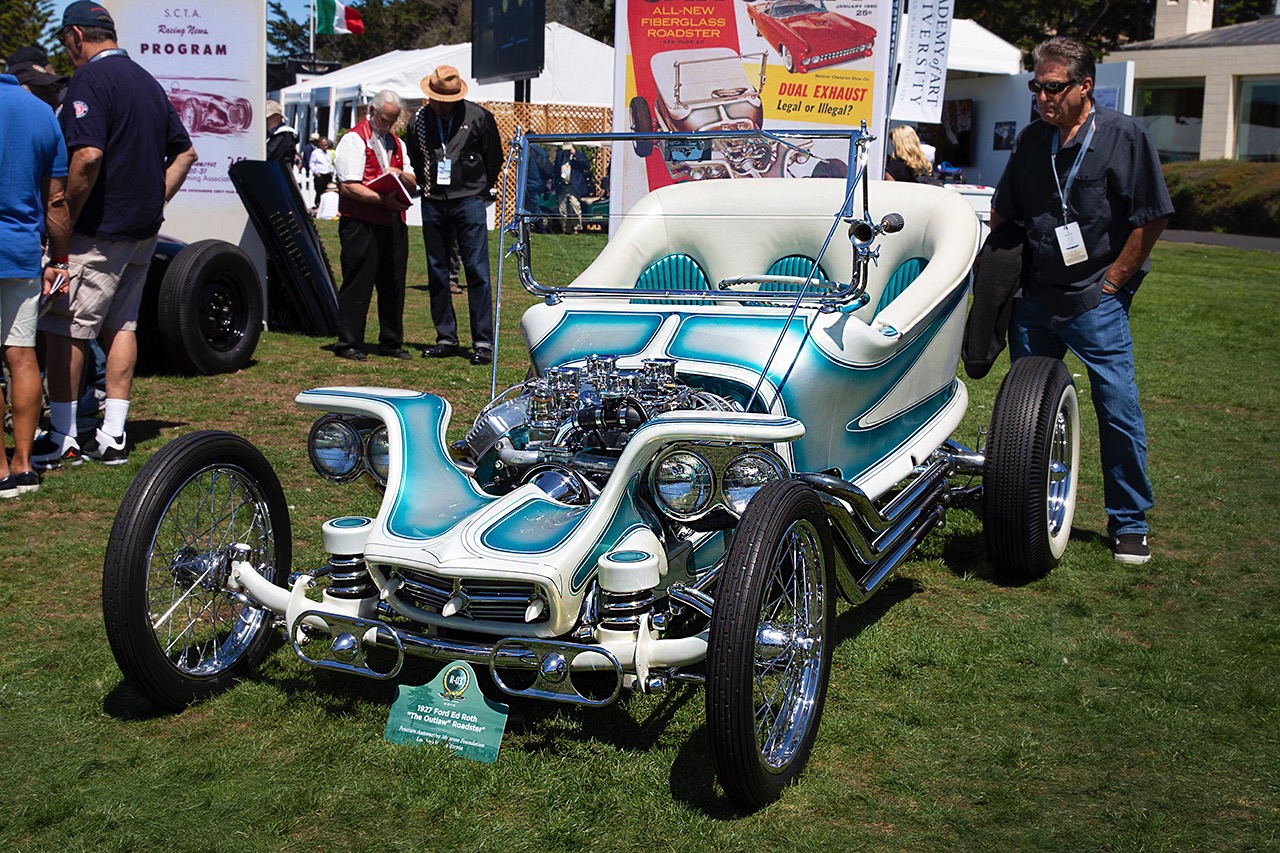 When you’re shooting photos at a popular automotive event like Pebble Beach you have to be patient and hope that show attendees won’t be in your shot. So I waited – 2 minutes, 5 minutes, 10 minutes – for this gentleman to move, but he never did. I finally accepted it that he was as hypnotized as I was by Ed “Big Daddy” Roth’s customized ’27 Ford, The Outlaw. This January 1960 Car Craft cover car is recognized the world over. 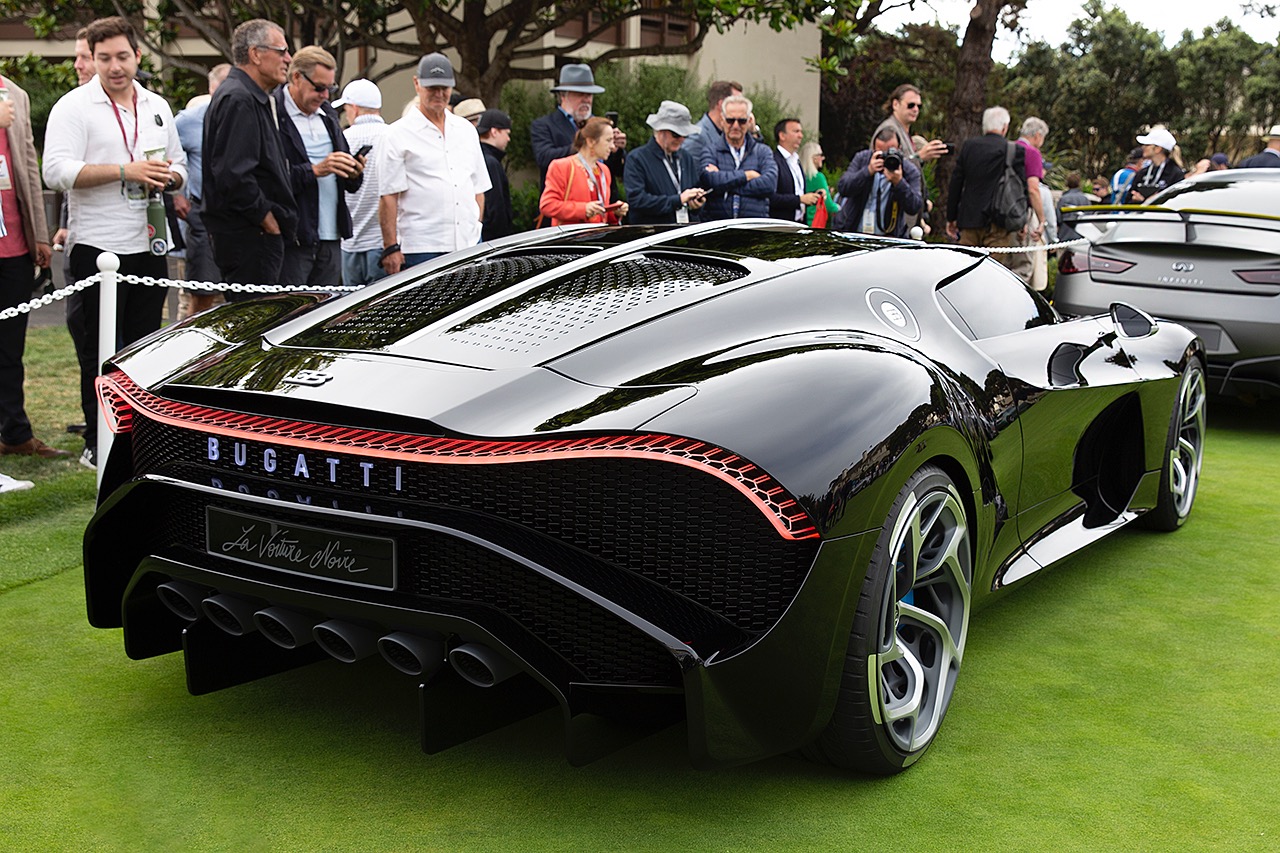 Described by Bugatti as “an opus of elegance and finesse,” La Voiture Noire is a one-off, massively powerful, carbon fiber tribute to Bugatti’s rich history and its Type 57 Atlantic Coupé. Rumored to have been sold to a “Very Rich Guy,” this stunning creation captivated crowds circling the Concept Lawn at Pebble Beach. 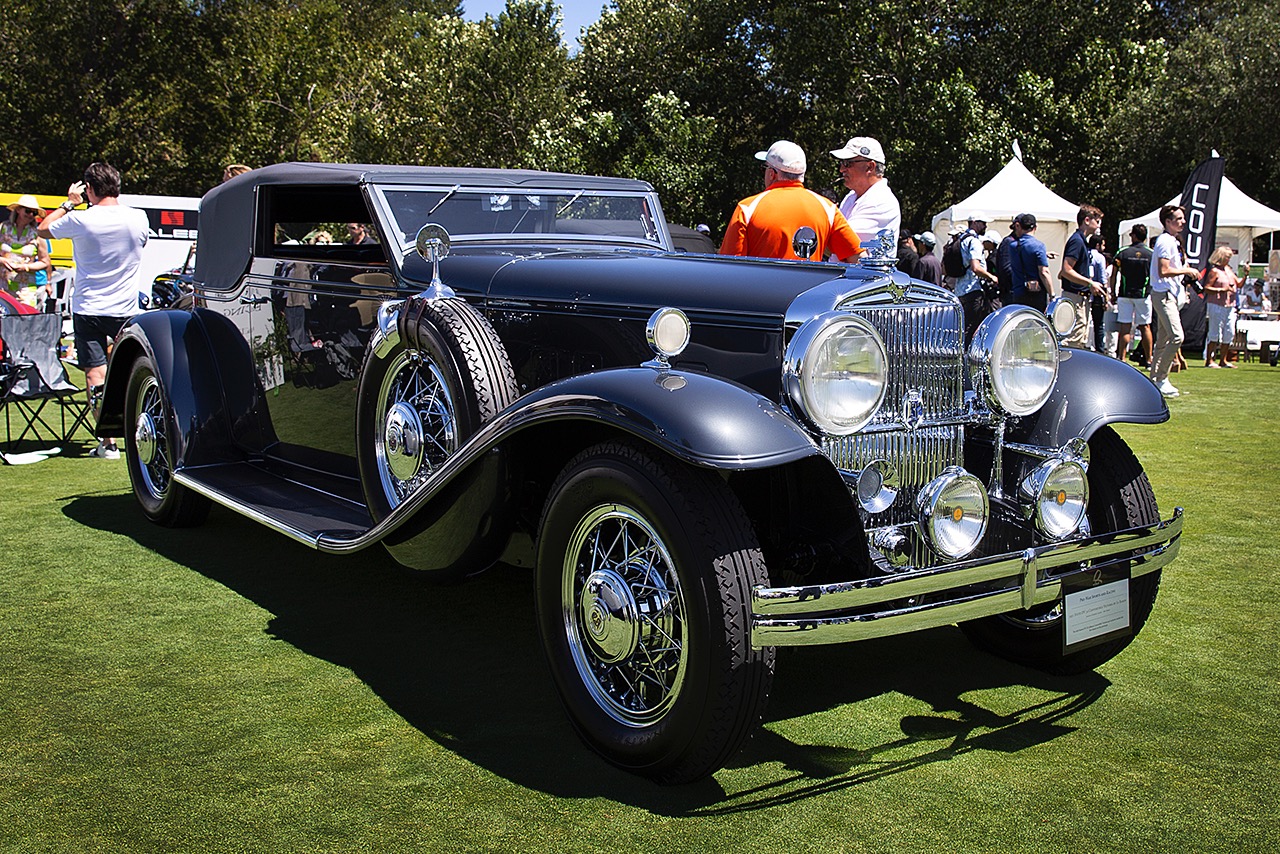 This year, the Rolex Circle of Champions Best of Show award at The Quail, A Motorsport Gathering, was awarded to Joe and Margie Cassini’s sexy-sleek ‘31 Stutz DV 32 Convertible Victoria by Le Baron. 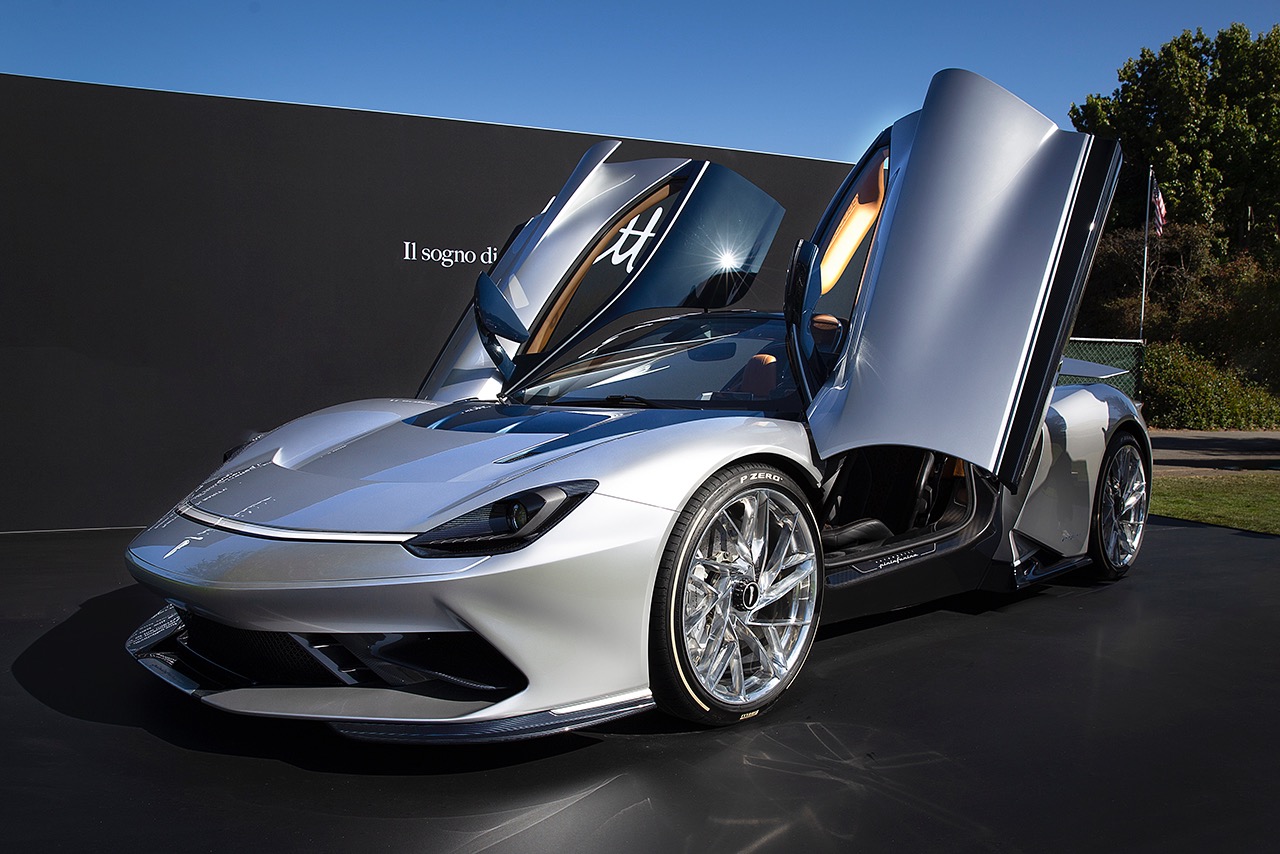 Elettrizzante! New from Pininfarina is the electrifying, 1,900 horsepower Battista Hypercar! With an e-powertrain from Croatia’s Rimac Automobili featuring an e-motor to power each wheel, the Battista can charge from 0-60 in under 2 seconds and reach a top speed of 218 mph. Interior and exterior design is leading-edge and luxurious. Automobili Pininfarina will build just 150 Battistas. 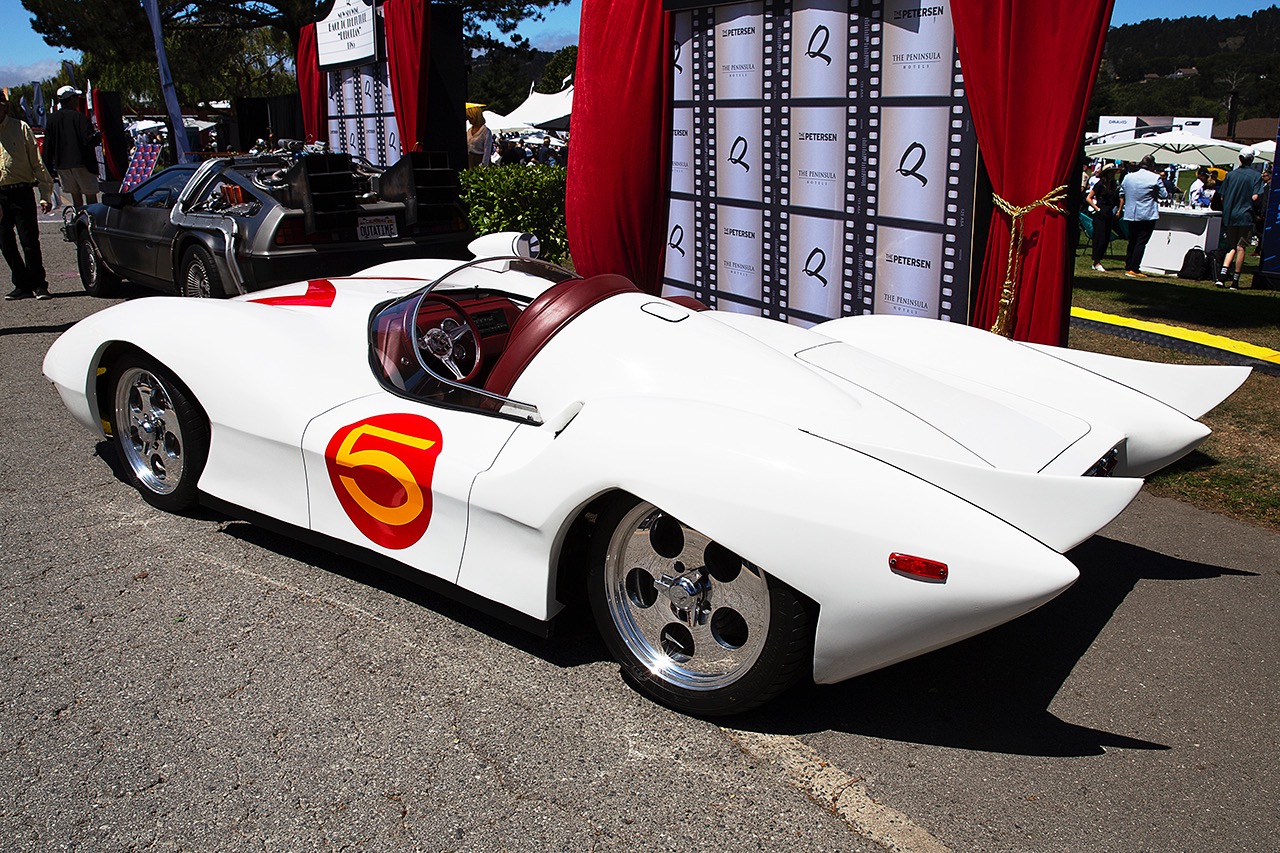 The Petersen Automotive Museum in Los Angeles brought seven of their Hollywood Movie Cars to The Quail. While it was hard to overlook the menacing black Batmobile from the 1998 movie, it was the ‘99 Mach 5 Prototype racecar inspired by the classic 1966 animated series, Speed Racer, that fired my imagination. Go, Speed Racer, Go! 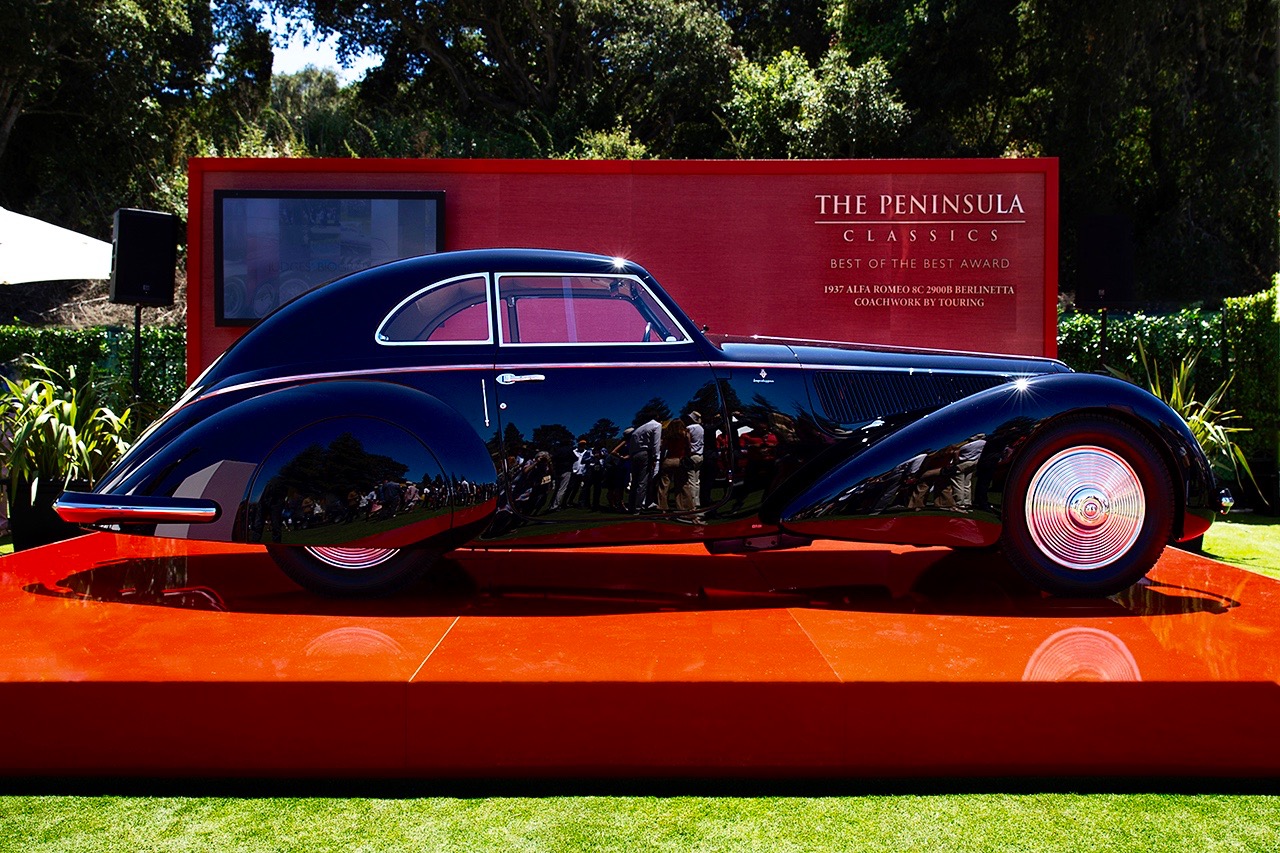 Considered by many to be the most desirable car of all time, this ‘37 Alfa Romeo 8C 2900B Berlinetta was the winner of the fourth annual The Peninsula Classics Best of the Best Award. It was a special treat to see it dramatically displayed at The Quail. Avid auto collectors David & Ginny Sydorick of Los Angeles own this gem. 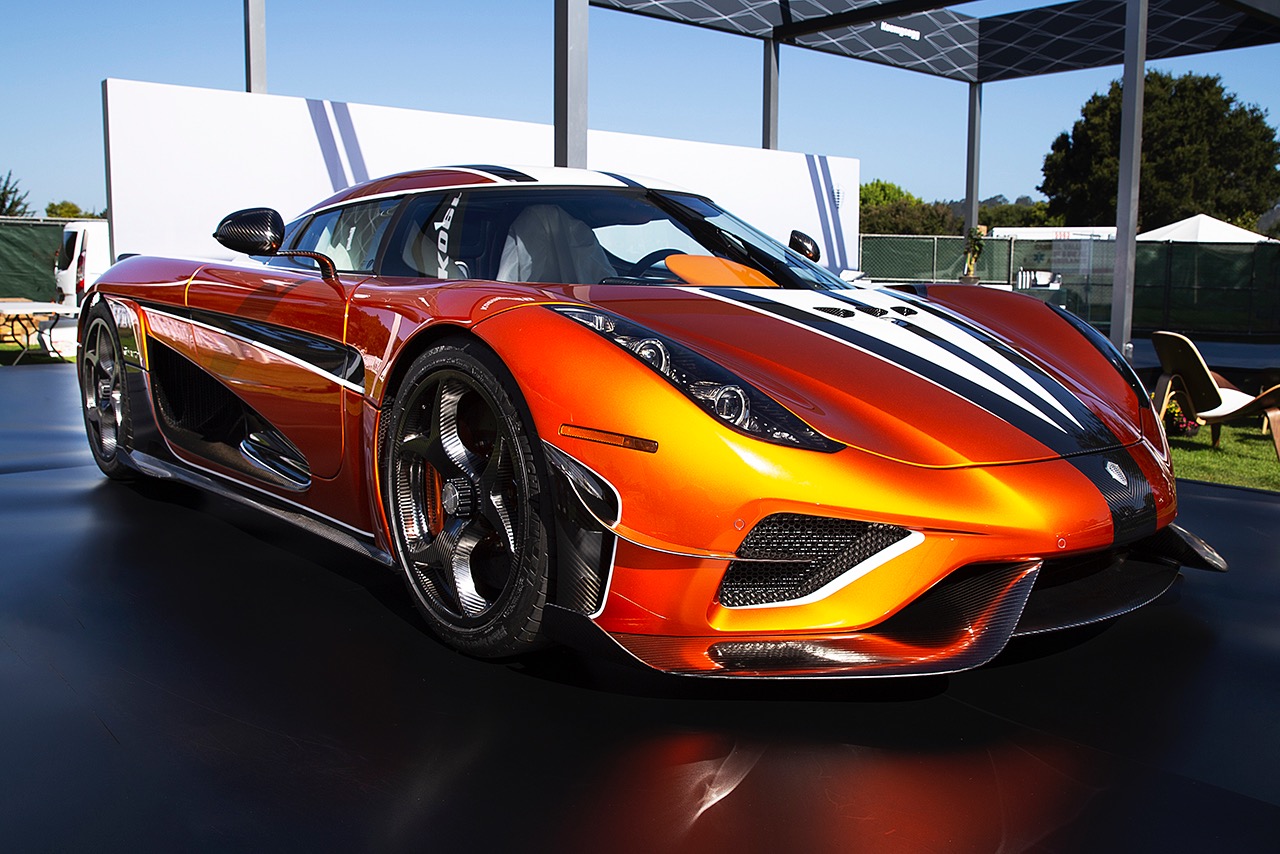 Swedish automotive manufacturer Koenigsegg always makes a strong appearance at The Quail. This eye-popping, 1,500+ horsepower orange Regera plug-in hybrid is one of only 80 produced. In Swedish, Regera means “to reign.” If you’re looking to rule the road you’ll need a king’s ransom to acquire one. It was priced at $1.9 million when production started in 2016. And, it hasn’t gotten any cheaper! 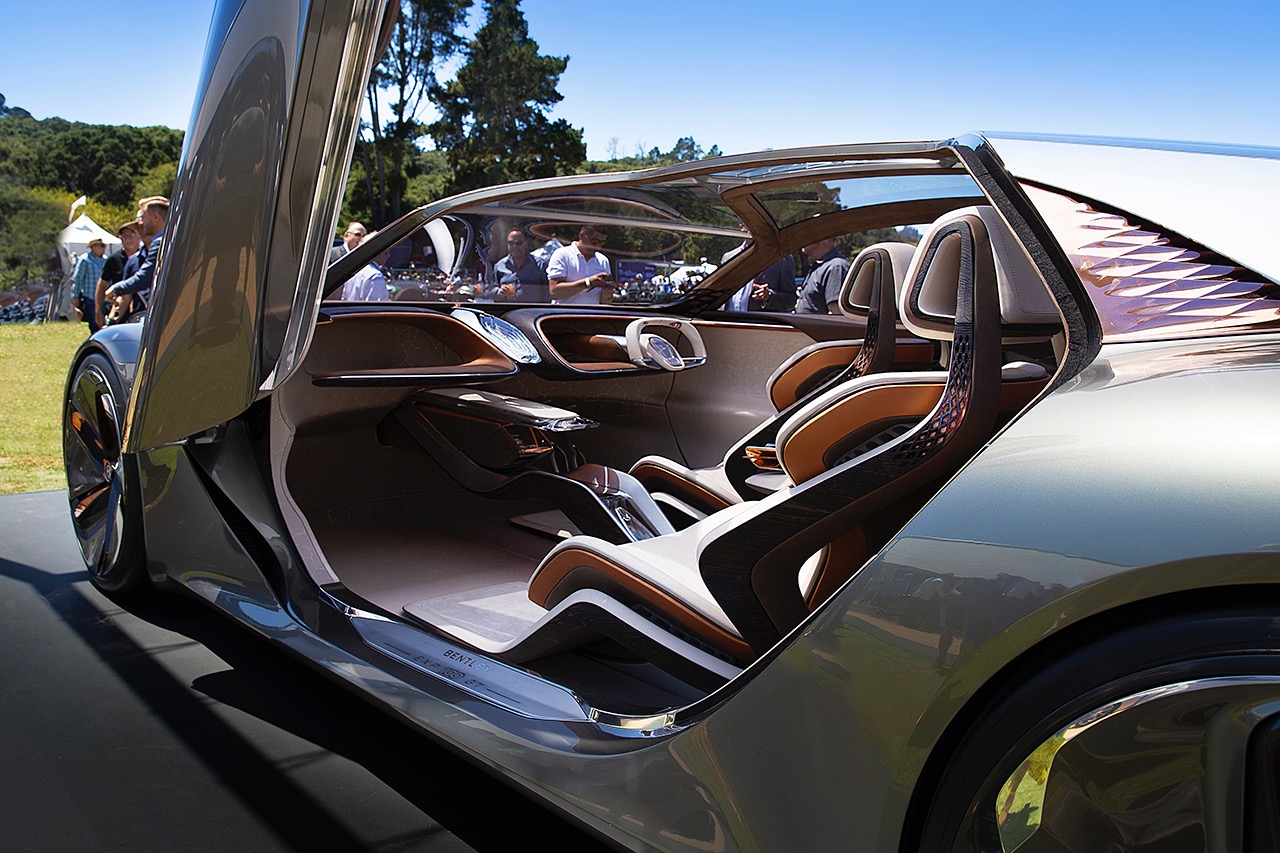 Bentley’s panoramic EXP 100 GT Concept Car sat on an extra-wide display platform at The Quail. To help celebrate their Centennial, Bentley designers and engineers pulled-out all the stops and plugged-in every Star-Trekkie trick they could imagine to build this 19 ft long, 4,188 pound, all-electric, autonomous vision of their Hypercar future. The claims: Voyage range 450 miles, 80% recharge in 15 minutes, 670 emission-free horsepower, scissored-door access to luxury seating and eco-friendly amenities for four. 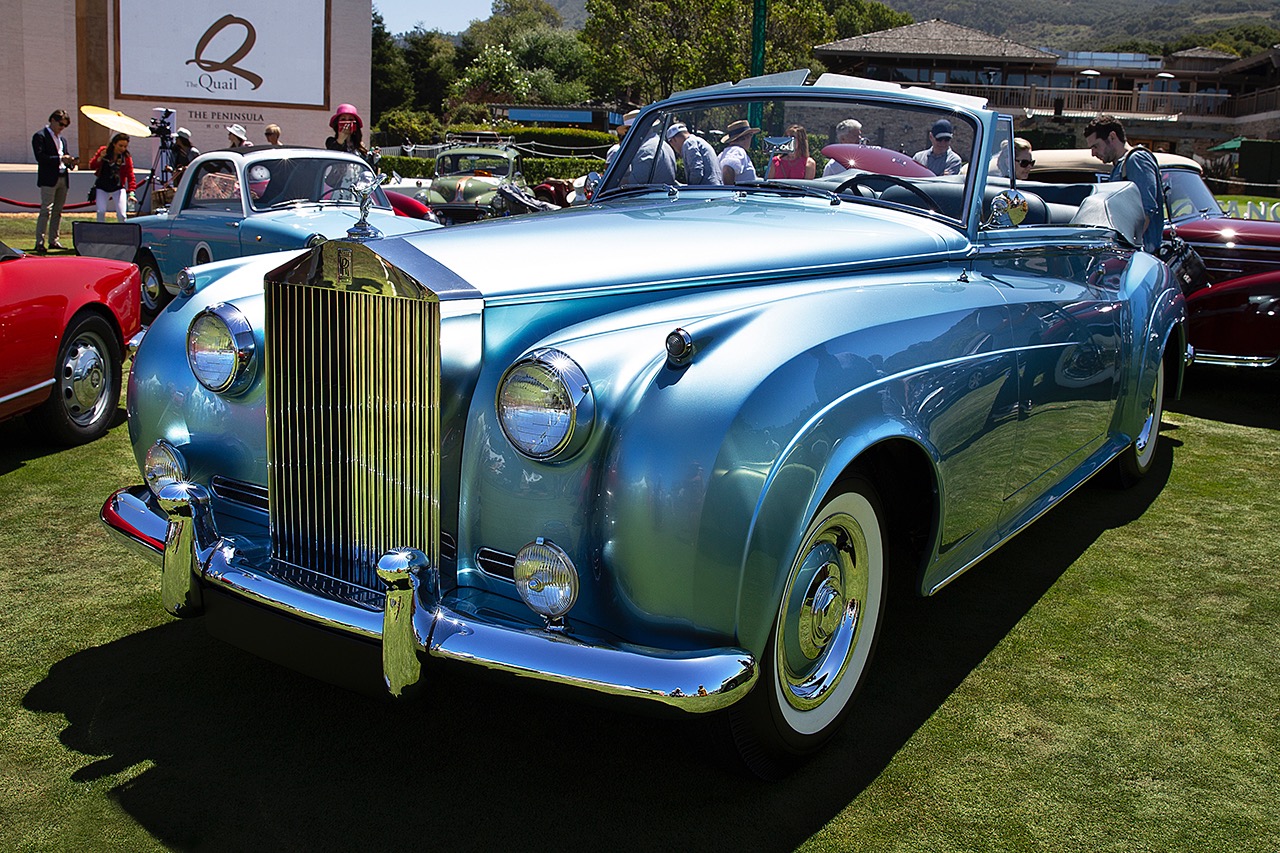 Owned by Alice & Todd Blue this appropriately painted icy-blue ‘59 Rolls-Royce Silver Cloud I Drophead Coupe was a factory special order from H.J. Mulliner. It is one of 13 convertibles built by Mulliner and one of only 10 with left-hand drive. From 1955 to 1966 7,372 Silver Clouds were produced. For many Baby Boomers, a trip to Dreamland could only be made in a Silver Cloud! 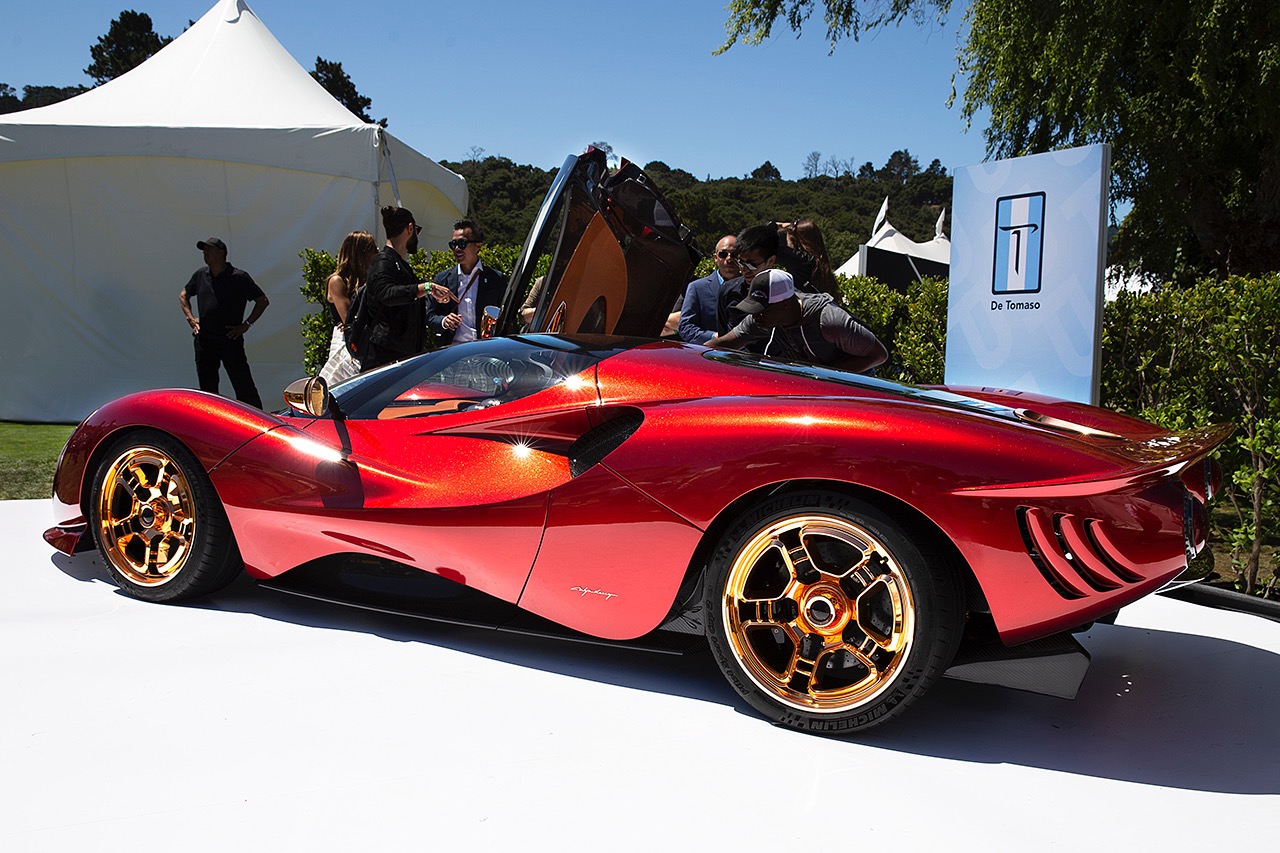 With production limited to a mere 72 units it might be wise to not stare too long at the new DeTomaso P72! Stickered at just $850,000 it’s unlikely you’ll find one to add to your collection of sinfully beautiful Supercars. There were some at The Quail who weren’t sure they liked the brass/copper toned wheels, but they were sure they loved the Jowyn Wong body design, the HWE carbon chassis (originally created for the Apollo IE Supercar) and the manual/stick shifter that protrudes up steam-punk-style through a flying armrest in center cockpit. 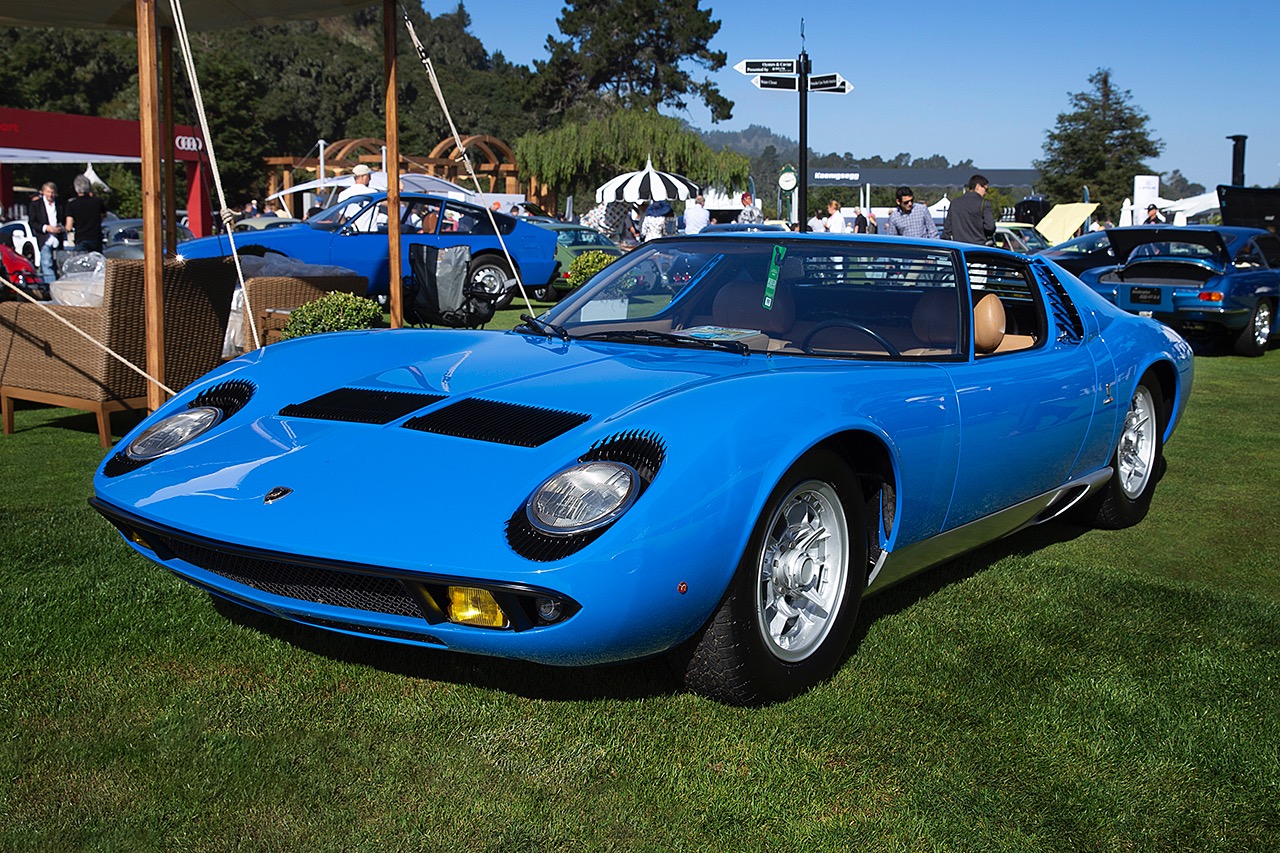 I had photographed blue Miuras before and was neither a fan nor a critic of this color choice – until my encounter with this ‘68 Lamborghini Miura P400 – sitting low and pretty, mid-field at The Quail. As I shifted camera angles and adjusted focus I began to feel a strong connection to this design and engineering achievement. And, I felt grateful in its blue presence since after all, this tranquil color represents wisdom, truth, calmness – and yes – heaven. 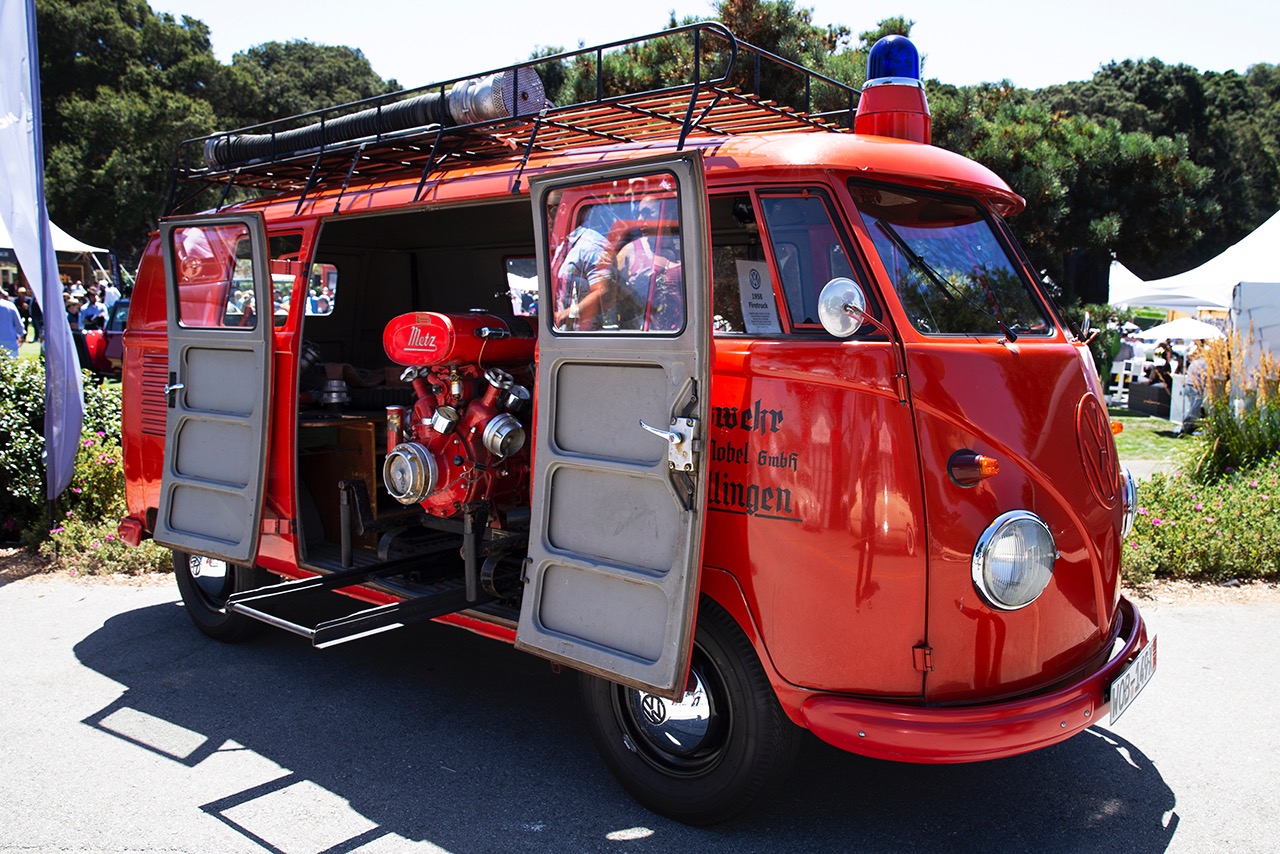 Least you think I’m getting all Zenlike, I’ll end this report by shifting gears and colors to this bell-ringing red VW Fire Bus. The Quail had a nice 70th Anniversary tribute lineup of Volkswagen Transporters. This low mileage ’58 Type 29A features a rail-mounted Metz high-flow water pump. Lettering on the bus connects this fire fighter to the municipality of Saarwellingen in Saarland, Germany.

For more information about the Pebble Beach Concours and 2019 winners, please visit https://www.pebblebeachconcours.net/