Sizzlin’ Supercars and Smokin’ Sigaros ignite the show fields in Seaside! Our man Jim Palam breathed it all in to serve-up this tasty Special Report on MONTEREY CAR WEEK 2022 – CONCORSO ITALIANO! 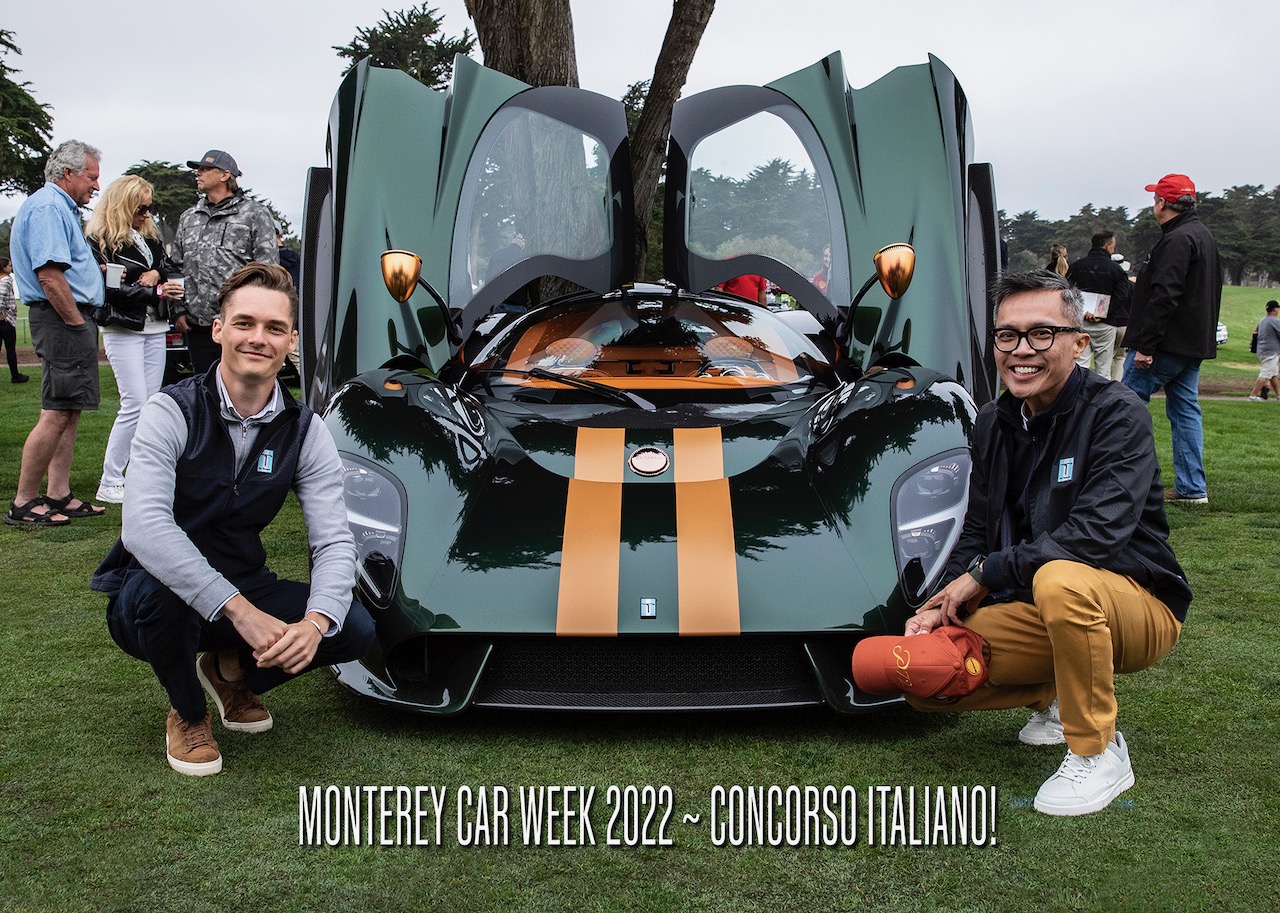 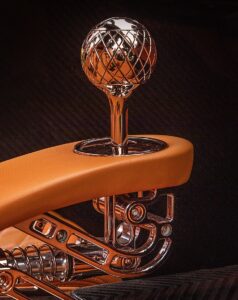 Che giornata fantastica!  You know you’re about to experience a fantastic day when spread-out before you on the manicured fairways of the Bayonet and Black Horse Golf Course in Seaside, CA is an armada of Italian automotive excellence, achievement and bravado.

Italy was the birthplace of the Renaissance and it’s no surprise that it has a rich history in art, cuisine, architecture and design. Names like da Vinci & Raphael in art, Michelozzo and Ponti in architecture and Fendi and Prada in fashion, layer delectably with automotive icons like De Tomaso, Ferrari, Lamborghini, Maserati and Pagani to create a tiramisu of impossible-to-resist Italian pleasure. MONTEREY CAR WEEK 2022 – CONCORSO ITALIANO! was an opportunity to indulge – and indulge I did.

One of the first Supercars to grab my attention as it drove onto the Concorso field was this gold-striped, Liquid Forest Green, Limited Edition De Tomaso P72, top. The P72’s design is an homage to the 1960s-era De Tomaso racing prototypes, including the Sport 1000, Sport 2000 and the P70. Pictured with the car are two De Tomaso representatives. The young man on the right has driven this car onto show fields and in exhibition races on the track. Minutes before I took this photo, I asked him what it was like to open-up the P72 on a race track and he broke into a broad smile, that stayed with him throughout the photo shoot. No further explanation was needed.

In many of the modern Italian Supercars and Hypercars you’ll find an extraordinary level of what some might call extravagant detail. The De Tomaso P72’s floating gear shift is a good example. De Tomaso calls this switchgear and cockpit design ‘Tactility’. Unfortunately, I could not get my hands on it but it sure looked like Eye Candy to me.

I do hope you’ll enjoy the 15 Concorso Italiano 2022 highlights presented here. Like so much of Monterey Car Week there seemed to be no end in sight when it came to exciting, memorable moments to experience, cherish and share.  So, to the Concorso Italiano team from the Car Guy Chronicles’ team – Bravissimo! 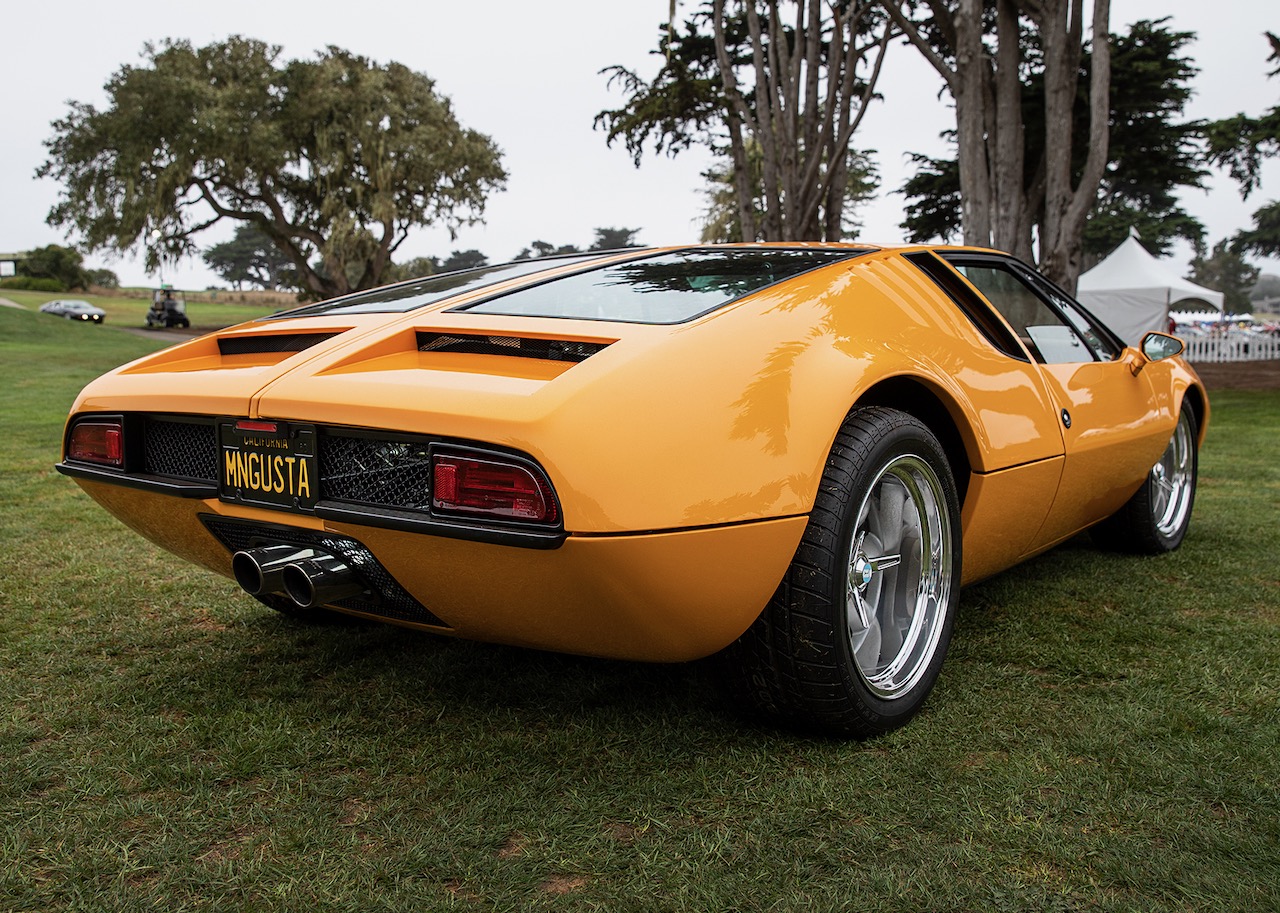 This Grabber Orange ‘69 De Tomaso Mangusta was essentially trailered from the restoration shop directly to the Concorso. While the owner was humble about the work done, he needn’t have been; the restoration was expertly planned and executed. The Mangusta was produced by De Tomaso from 1967 through 1971 when it was replaced by the Pantera. Its name is Italian for the word mongoose, which is a small, highly energetic omnivore that enjoys the occasional dinner of a snake. Legend has it that De Tomaso named it specifically to get under the Cobra skin of Carroll Shelby! 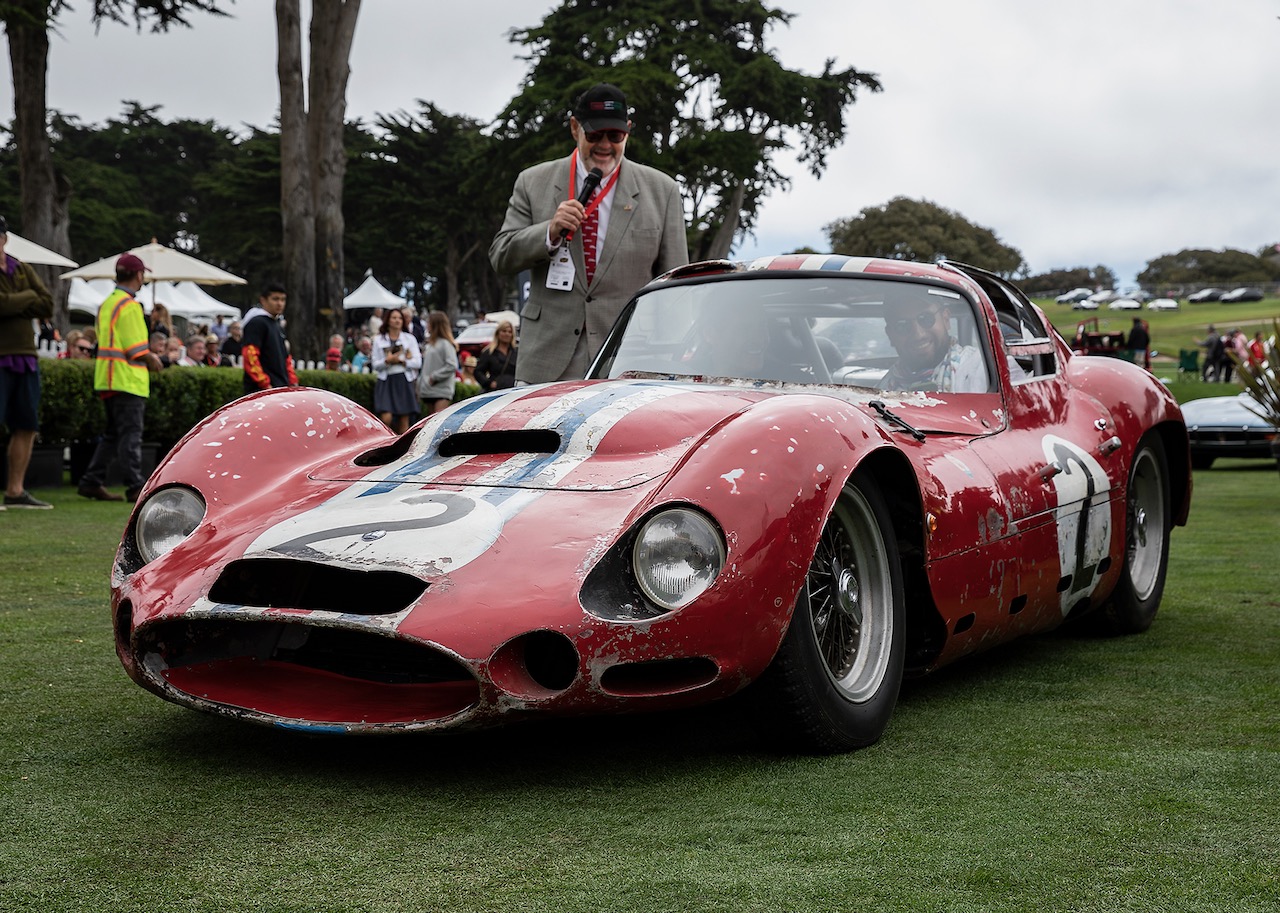 When this raced and weathered Maserati Tipo 151/2 rolled up on the awards lane it rolled right past emcee and presenter Matt Stone. Seems there were little to no brakes left on this historic 5.0 litre 1963 Le Mans competitor. Car No. 2 was entered in the ’63 French classic by Johnny Simone’s Maserati France team. It fought for four hard hours before the transmission would fail and its Le Mans dream would be over. The car is now owned by Alex Pilibus of Fresno, CA. 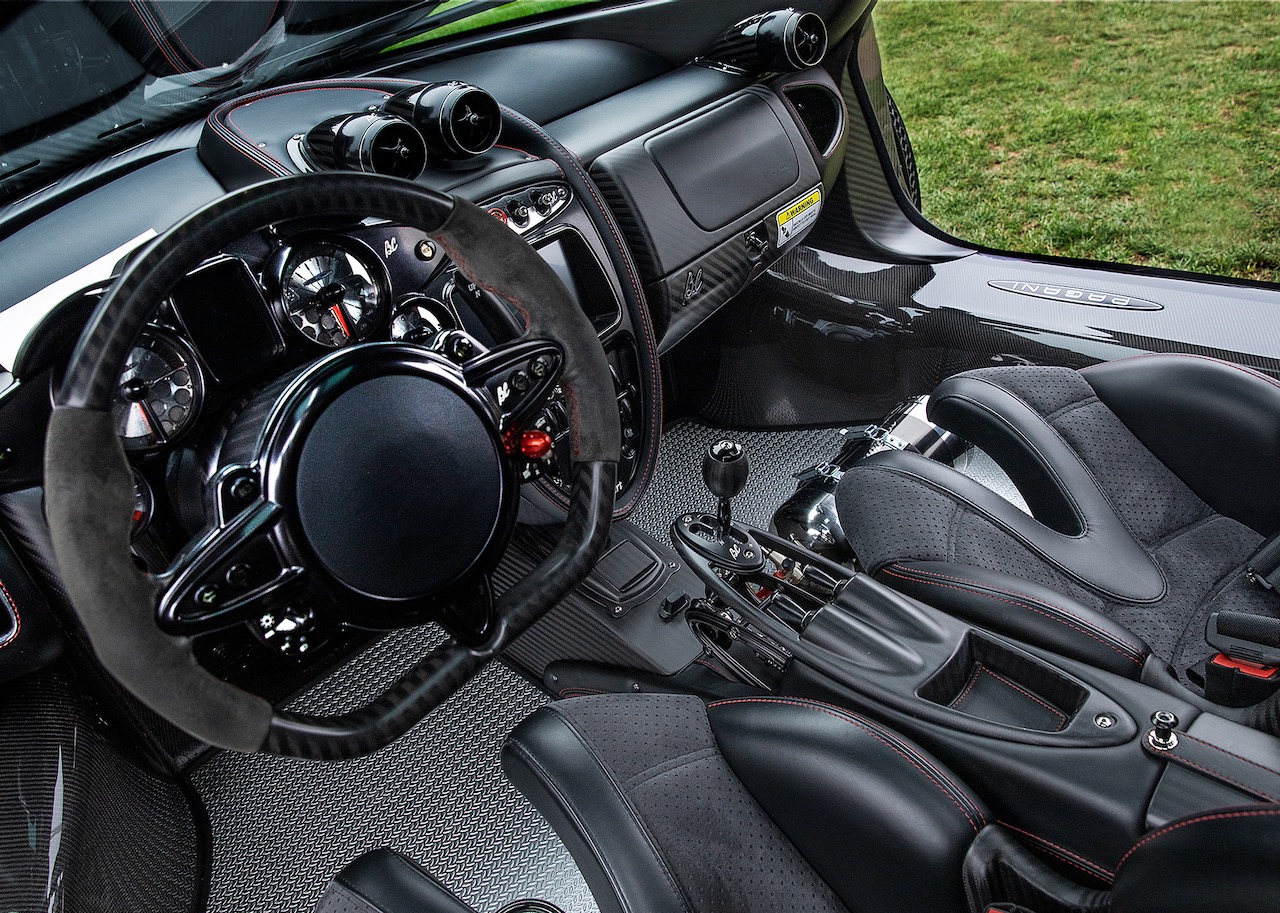 Squadra Lupo Import brought a number of their rare and expensive Hypercars to Monterey Car Week – including this V12 Twin-Turbo AMG-powered Pagani Huayra BC that was on display at MONTEREY CAR WEEK 2022 – CONCORSO ITALIANO! – and on the track at Laguna Seca the next day. It was impossible for me to get a full body shot as it was always surrounded by adoring fans. But I was able to grab this shot of its beautiful, murdered-out interior. The BC designation refers to Benny Caiola, the Italian mogul and exotic car collector to whom the Pagani BCs are dedicated. 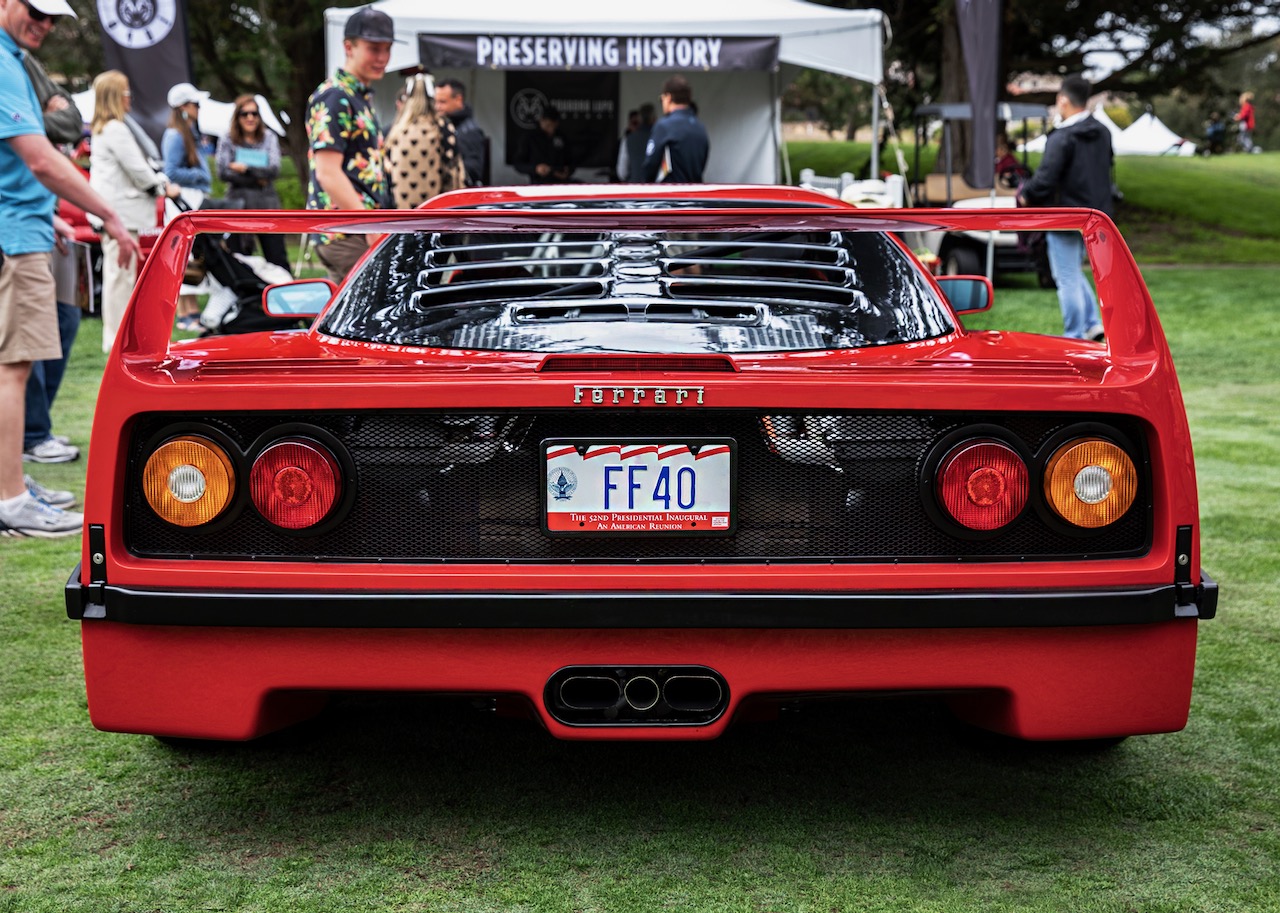 Designed by Pietro Camardella and engineered by Nicola Materazzi to celebrate Ferrari’s 40th anniversary, the Ferrari F40 was at the time of its introduction in 1987 the fastest, most powerful and most expensive automobile offered for sale. It was also the last Ferrari personally approved by Enzo Ferrari. From 1987 through 1992 a total of 1,315 F40s were produced with just 213 destined for the United States. Power for this mid-engine marvel came from its twin turbocharged and intercooled V8 engine. Still considered a must-have for the upper echelon of Ferrari collectors, one can expect to pay $2M and up for this 199-mph icon. 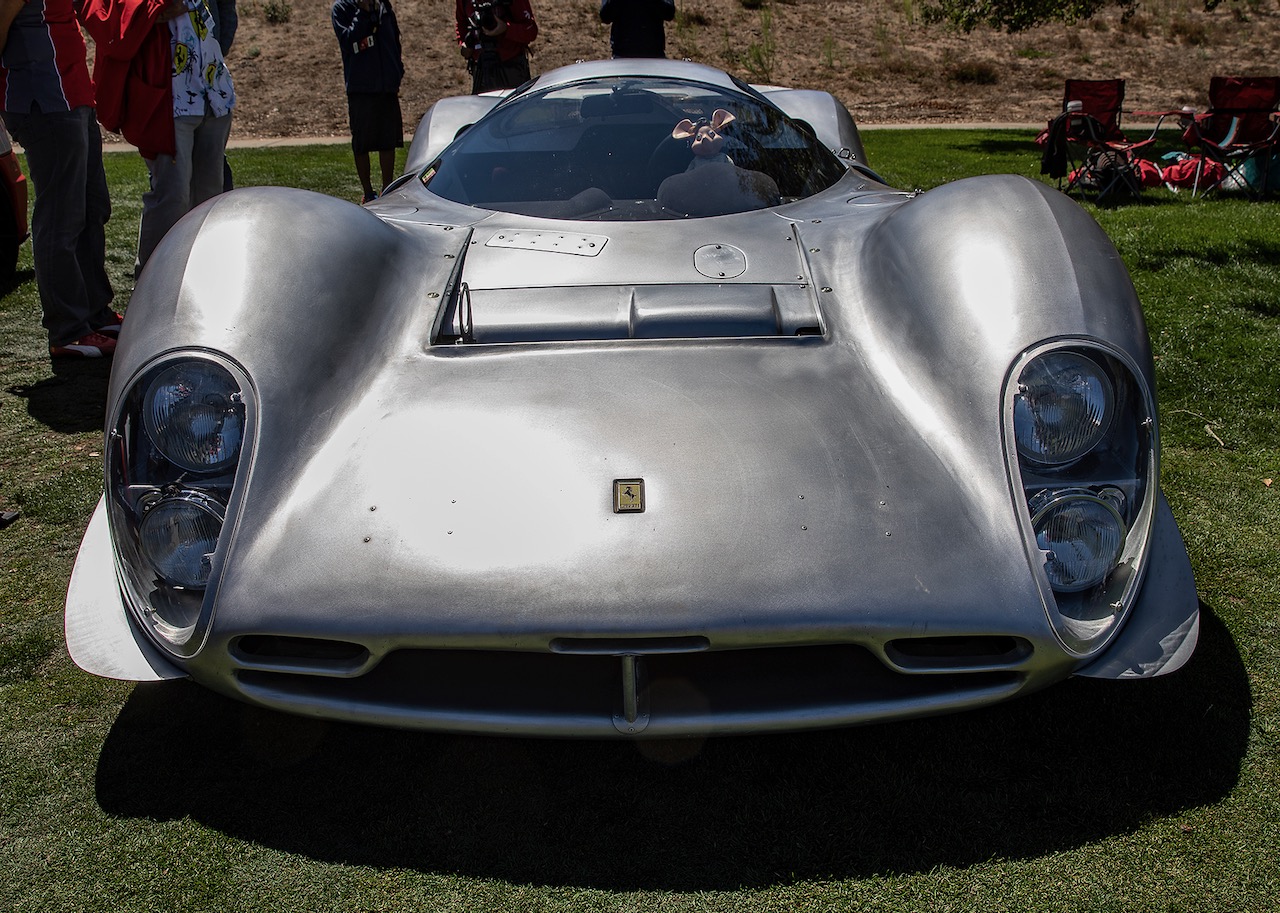 This is not your grandfather’s racing Ferrari! In fact, it’s really not a true Ferrari at all but rather, an audacious, hand-crafted, aluminum-bodied ’67 Ferrari 914 P tribute car built by aerospace engineer and ultimate Car Guy John Nino. His unpainted and unrestrained mid-engine Berlinetta creation is fitted with late model Ferrari suspension pieces and a 600-horsepower V-12 from a Ferrari 550 Maranello. Like the original 412 P, coolant reaches the engine from the front mounted custom radiator trough cooling tubes built into the chassis. 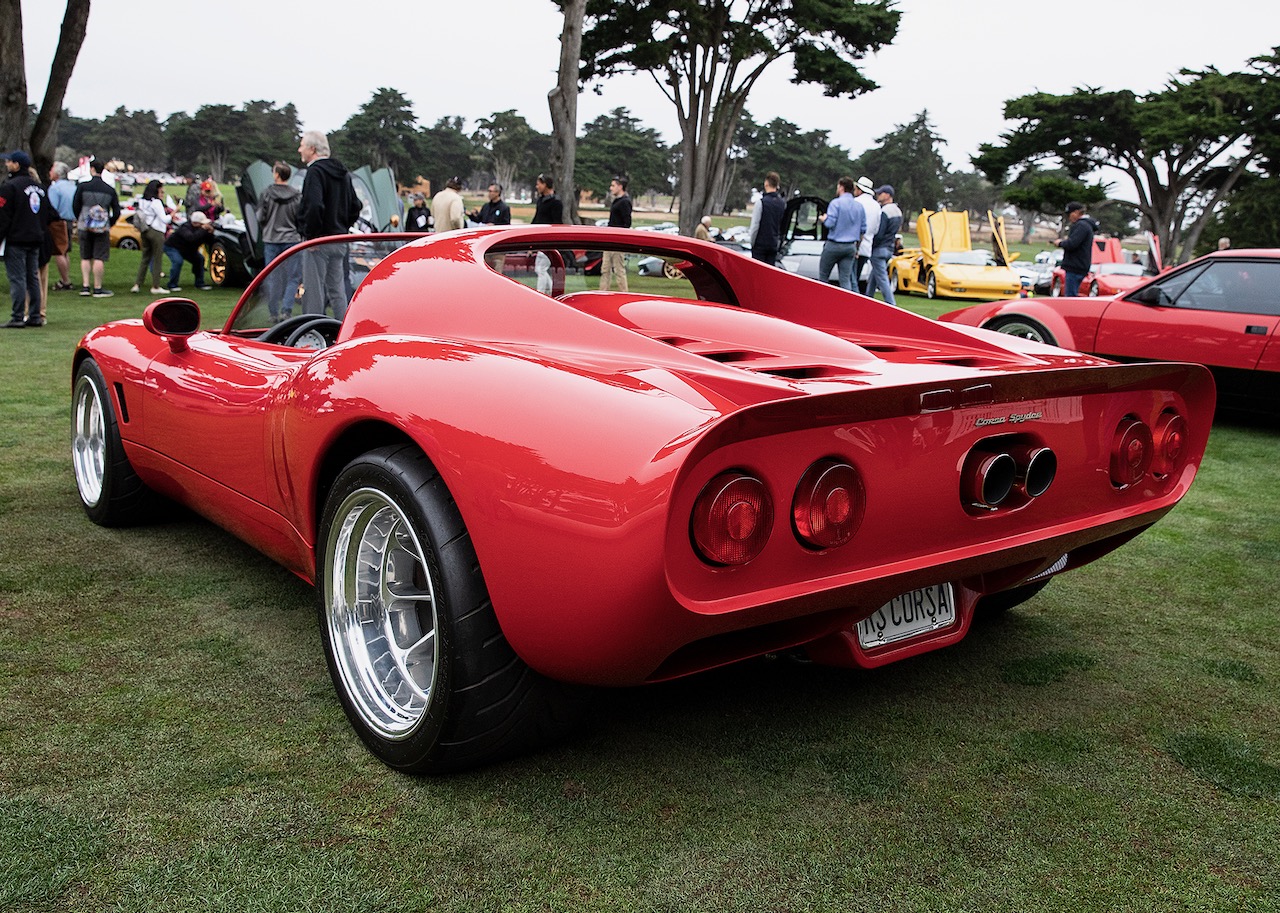 Nestled in among the Concorso Italiano Panteras was Richard Spratling’s ‘09 one-off Corsa Spyder. This bespoke tubular framed, aluminum bodied beauty takes its design influence from the Ferrari Dino 206SP. Its power comes from a 377 cubic inch direct-port fuel injected Ford V8 hooked to a ZF 5-speed manual transmission. Richard’s RS Design produced only one example of the Corsa Spyder which received a lot of praise and attention at MONTEREY CAR WEEK 2022 – CONCORSO ITALIANO!. 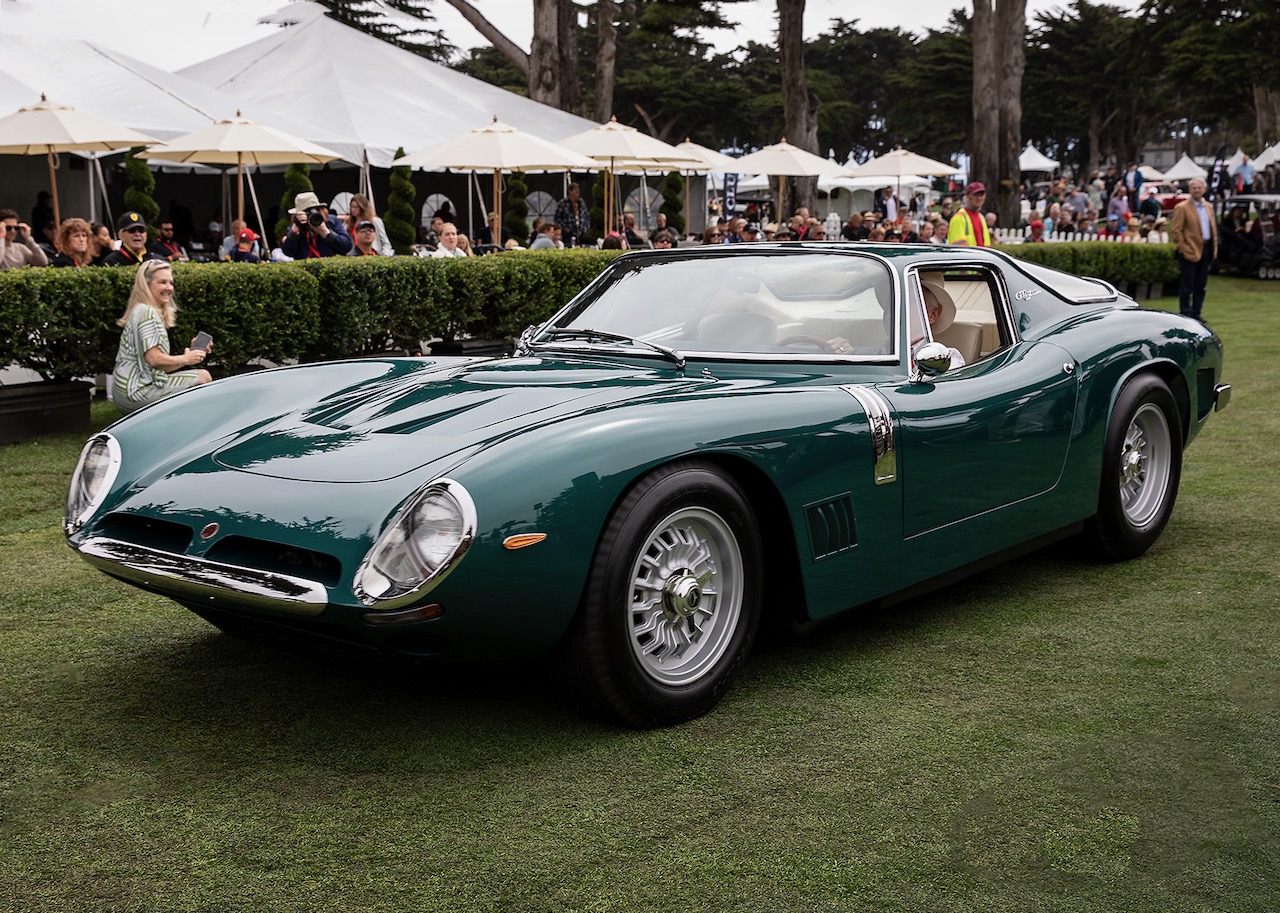 Signore e Signori, the Concorso Italiano 2022 Best of Show! Billy and Tisa Hibbs’ sublime ‘67 Bizzarrini 5300 Strada took Best of the Best at this years’ Concorso. These honors were well-deserved as every inch of this low-slung, front mid-engine, rear wheel drive, Chevy-powered classic is perfection. Designed by ex-Ferrari Chief engineer Giotto Bizzarrini, 133 Bizzarrini sports cars were produced from 1964 to 1968. If you’re lucky enough to find one, grab it, as their value has been climbing steadily over the last 10 years. 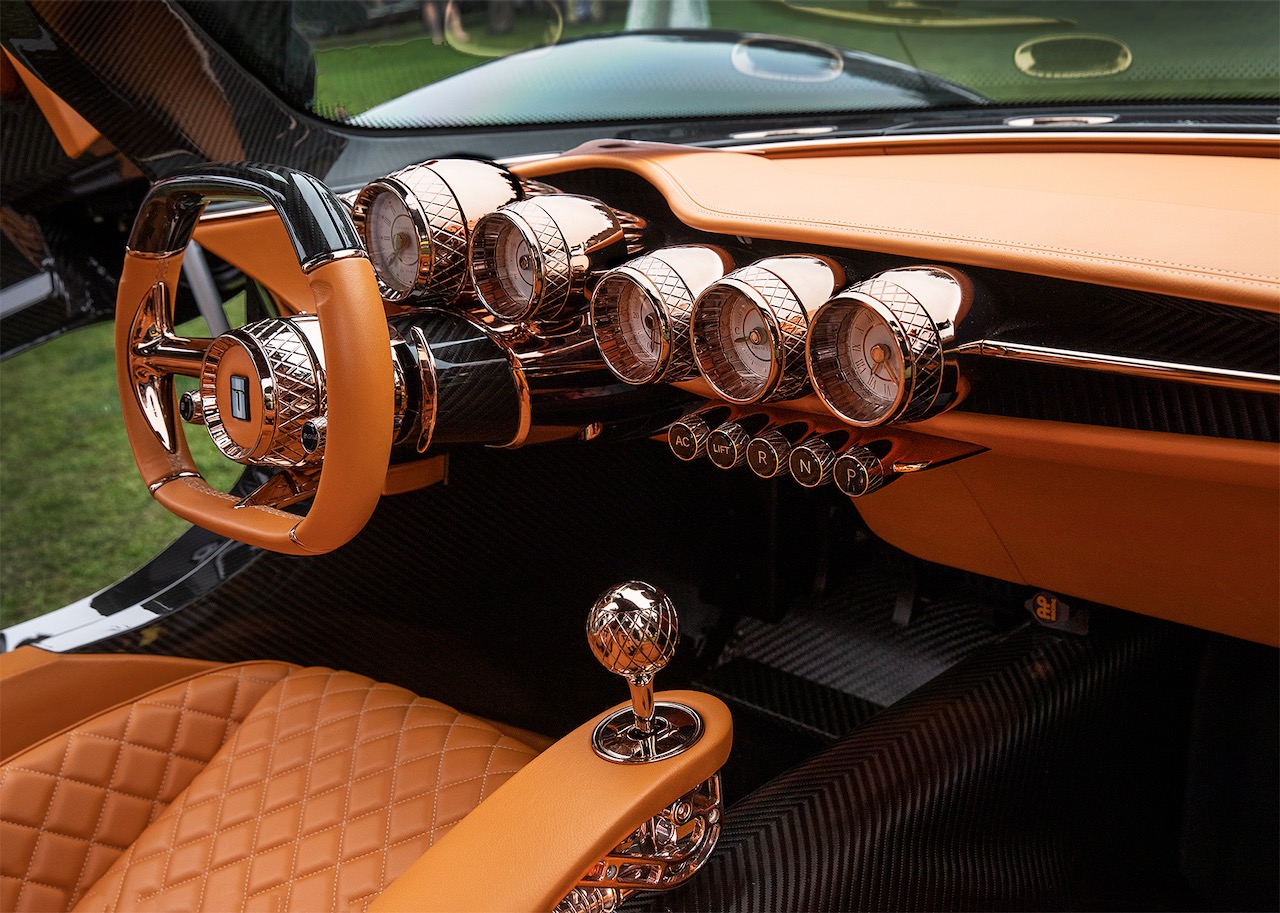 On one side of the automotive esthetics coin, you have the Rat Rod, and on the other you have the De Tomaso P72. OK, I know many will find this analogy a bit of a stretch, but proponents from both design camps claim to be following a minimalist design approach. Both utilize analog gauges and both rely on “tactility” to deliver sensory input to the driver. Whichever design camp you are in I think we would all agree that getting behind the wheel of this P72 would be the thrill of a lifetime. 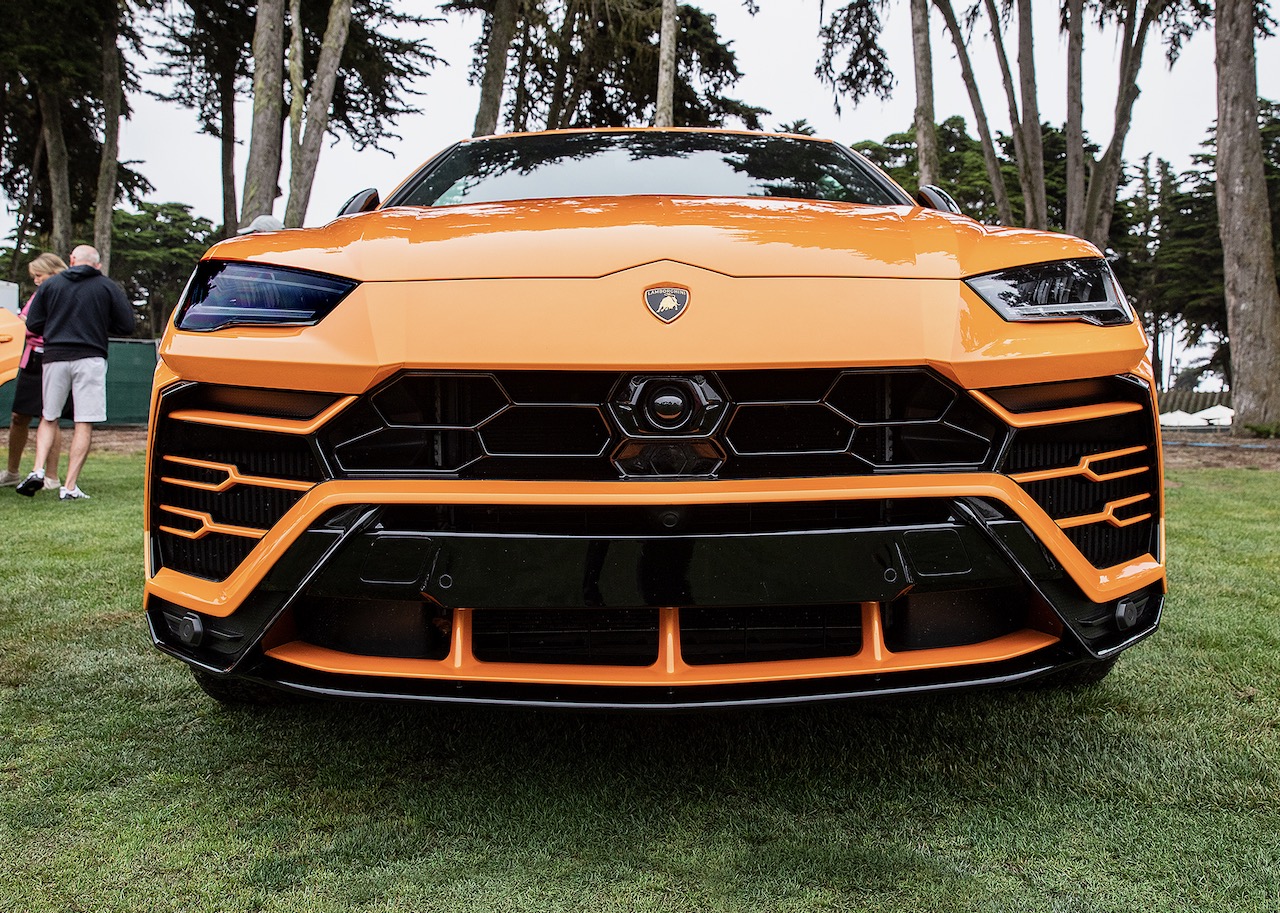 Billed as “The First Super Sport Utility Vehicle in the World“ the Lamborghini URUS was one of a small number of new Italian models on display at the Concours. This SUV is impressive: 4.0-liter twin-turbo V8 with a top speed of 190 mph, track-to-sand drivability, muscular body panels and massive wheels, a luxury interior featuring three TFT screens and of course, a golden bull emblem on the hood. All very nice but I just couldn’t stop thinking the famous Lambo “Y” design elements in the grill looked like BBQ grill forks! 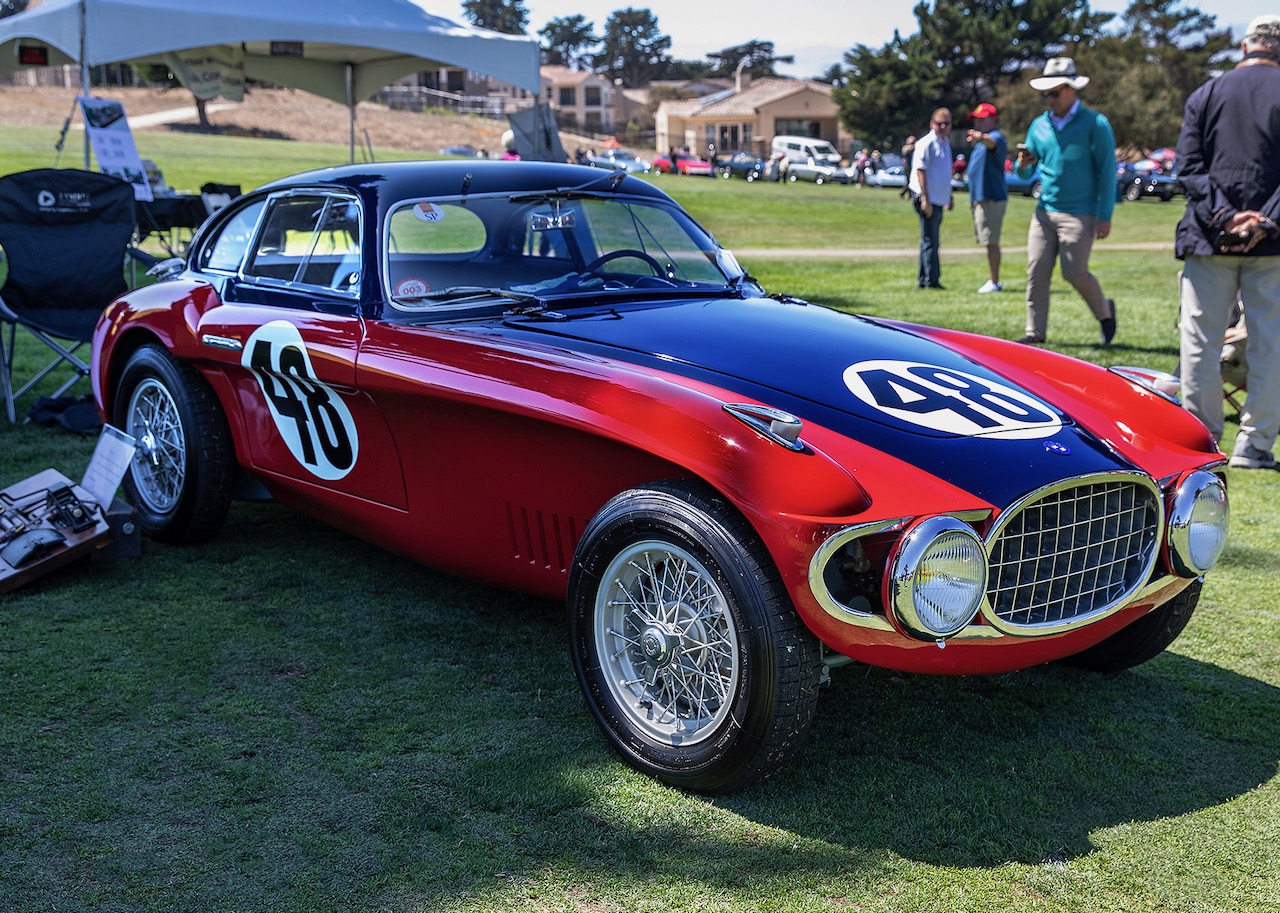 Designed by Giovanni Michelotti this awesome ‘52 OSCA MT4 Vignale Coupe was commissioned by Dr. Mario Demonte, a Turin, Italy chemist. It took its class in the 1953 24 Hours of Le Mans and its class again in 1954 at the Buenos Aires 1000 km. Specs include minimalist wheel arches for improved engine and brakes cooling, a 1.1 litre inline Four producing 92 horsepower and a top speed of 100 mph. Curb weight is 1,654 pounds. What a thrill to see old Number 48 on the Concorso field! 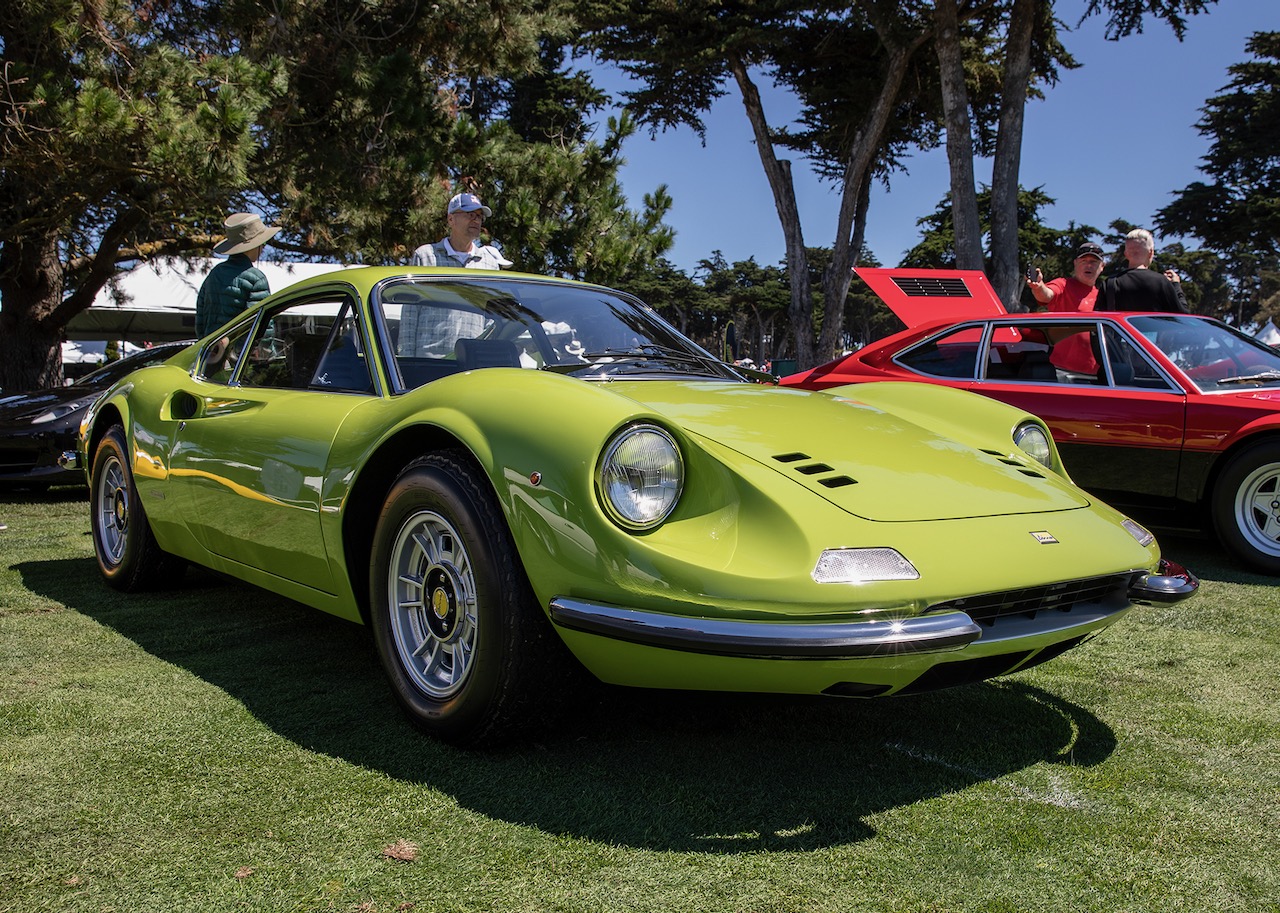 Lime Green Italians kept catching my attention at the Bayonet and Black Horse Golf course. In this case it’s the paint color on this sexy and delicious Ferrari Dino. Ferrari produced the 206 GT, 246 GT and 246 GTS Dinos from 1967 to 1974. Unfairly overlooked in the early days by Ferrari collectors and flippers, one could purchase a decent Dino for around $100,000 back in 1973. Today, expect to shell out over $500,000 for well sorted example! 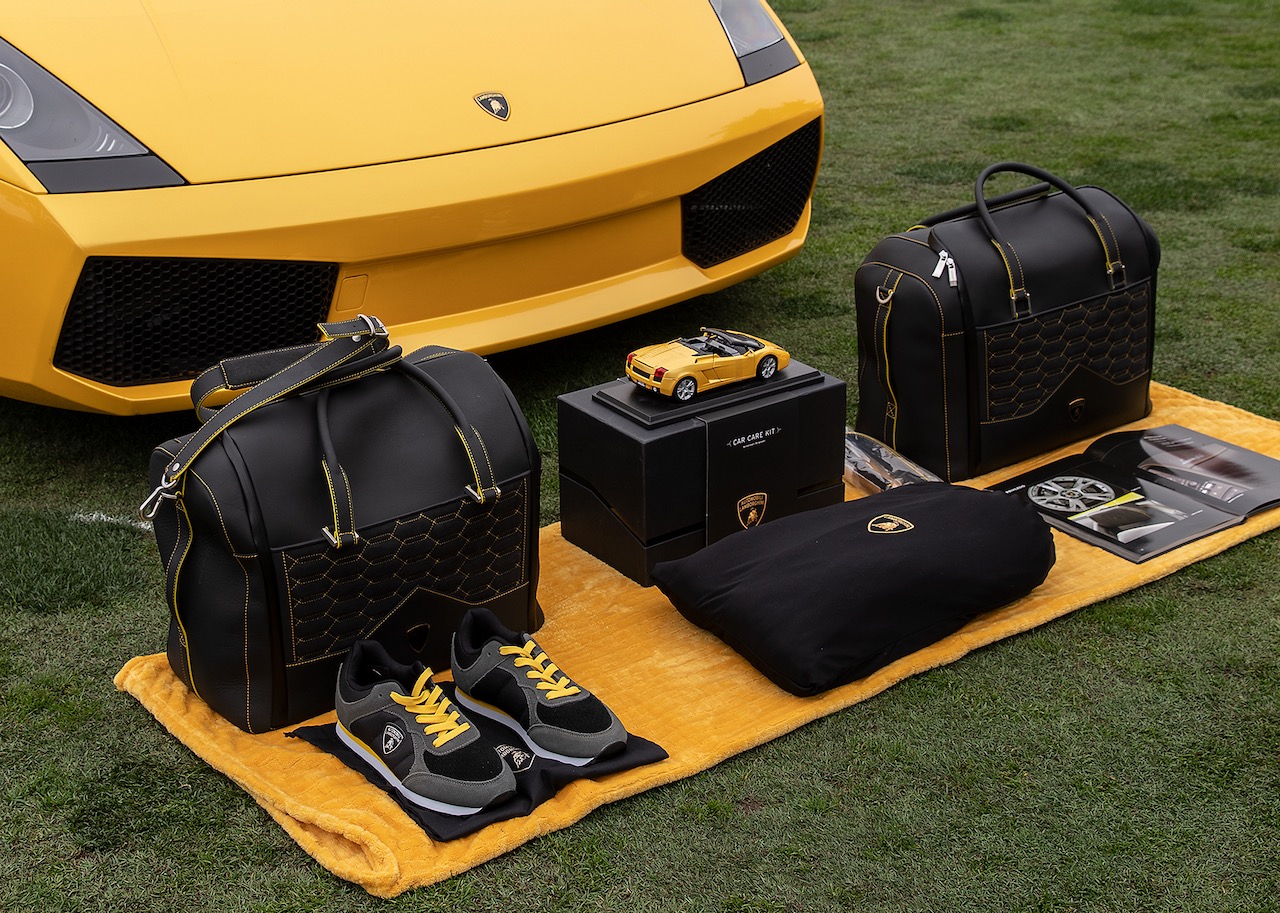 Lamborghini is one of the world’s more successful luxury brands. Since its inception in 1963 in Sant’Agata Bolognese, Italy the company has consistently reengineered and expanded its marketing efforts to maintain a strong connection to its customers and fan base. In today’s competitive and quirky automotive marketplace, it’s no longer enough to simply offer expensive swag like Lambo driving shoes and luggage to build brand loyalty. They are now using digital technology like the invitation-only mobile Lamborghini app Unica to engage and support the exclusive Lambo community. Users can manage their vehicles, preview new products, register for events and get real-time updates of their car being built using the app. 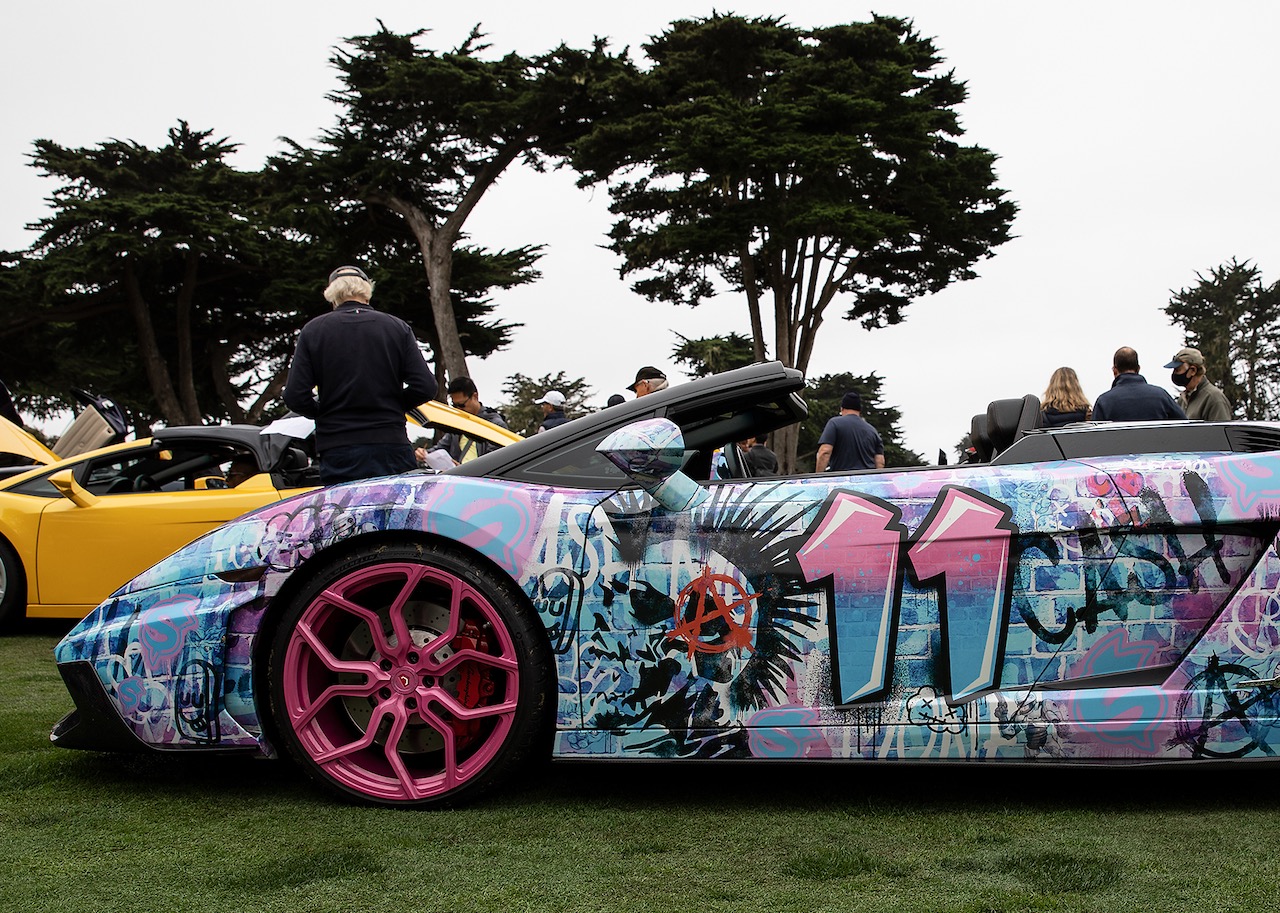 Wrapping a vehicle has become an acceptable and often artistic way to personalize your ride. The trend of late is Graffiti Wraps and wouldn’t you know it I found one on a Lamborghini at Concorso Italiano. The slang theme for this particular wrap is “Cash Money”, with the spray-can-style words emblazoned on the hood and sides. No doubt this Lambo’s owner is a wheeler-dealer type. Its Idaho Famous Potatoes license plate reads TAGGED. 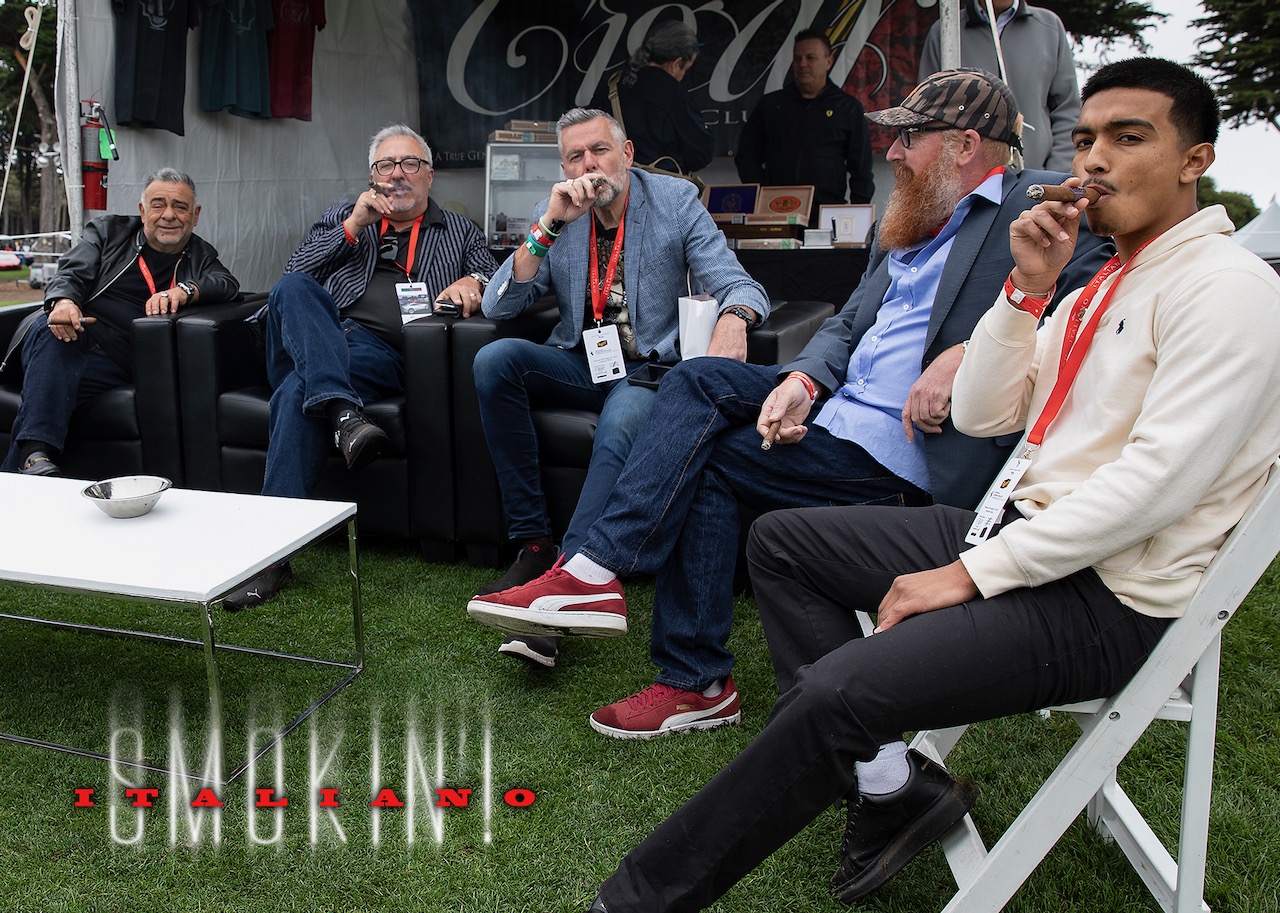 If you read my columns, you know that for me a significant part of the joy I get from covering cool car events like Monterey Car Week is meeting the always fascinating and colorful people who attend and participate in these gatherings. So, thanks to everyone who made MONTEREY CAR WEEK 2022 – CONCORSO ITALIANO! possible and special thanks to the Hideaway Cigar Club patrons who humored me by puffing their ‘sigaros’ almost in unison for my smoky end shot!