Skip to content
Chronicles’ Mike Matune is trackside at the SVRA vintage GP, held in conjunction with one of the hobby’s most exciting single-marque club events – SAAC 41. 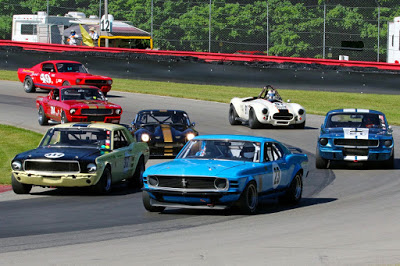 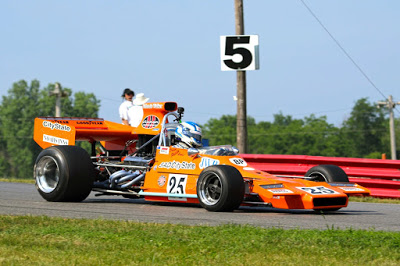 The Shelby American Automobile Club held its 41st convention in concert with SVRA’a Mid-Ohio GP. In addition to shows, open track events and dinners there was an SAAC-only race. Curt Vogt would take top spot home in his 1970 Mustang Boss 302, top, followed across the finish line by pole sitter, Scott Hackerson’s ‘67 Mustang. Here they lead the SAAC field down to the start joined by Christopher Zappa’s TVR, Andre Ahrie’s Cobra Comp R and the GT350s of Donnie Maull (#21), Frank Marcum (#314) and Marc Sharinn (#49).

Scheduled a week after the Brickyard Invitational, the event drew a great field, including Australians Philip & Aaron Lewis’ Matich A50 F5000, above, powered by a Holden-Repco V8. Australian constructor Matich enjoyed success in both the formula and sports racer ranks. Engine shares lineage with the Chevy V8; heads and intake are unique Repco pieces. 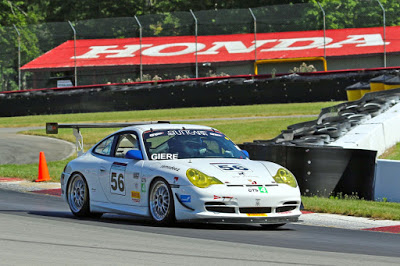 Another group joining SVRA for the weekend was IGT or International Grand Touring. They combine various classes for a number of more current cars such as Porsche and Cayman Cup racers, as well as Ferrari Challenge cars, into a single race. Over the season, Porsches compete for the Stuttgart Cup; Ferraris, the Maranello Cup. Thus they provide an opportunity for modern racers to compete and for spectators to get a view of newer factory, production-based racecars. Brandt Giere steers his GT3 Cup Car out of the Carousel and onto the straight. 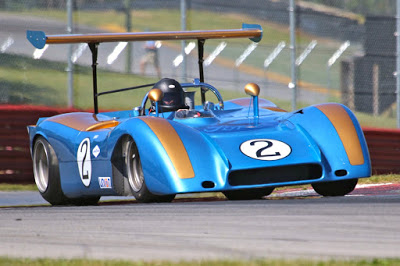 To help celebrate the 50th anniversary of the inaugural Can-Am season in 1966, the Group II field included period examples of the cars that competed during the initial seven-year portion of the series. Among them was Tom Cantrell’s Boss 429 powered Can Am SPL. Ford enjoyed limited Can-Am success; only one victory: Dan Gurney in 1966 at Bridgehampton. 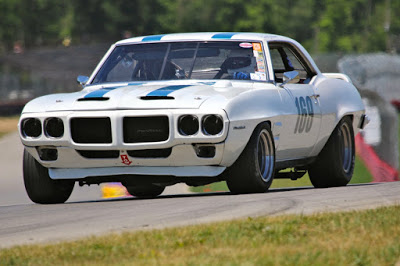 Even though Pontiac branded its top Firebird, Trans-Am, they only achieved a single win in the series: Milt Minter at Mid-Ohio in 1972. Scott Graham crests the straight before tackling the “Keyhole” in his ‘69 Firebird. 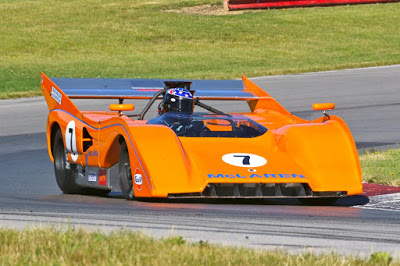 On the other end of the success scale was Chevrolet. They dominated the Can-Am series, first using small-block V8s and later with aluminum big-blocks. Porsche’s turbocharged 917 racers ended Chevy’s domination. Bill Heifner’s McLaren M8F sports 510-inch, Kinsler-injected aluminum Chevy power. It’s a veteran of the European counterpart of the Can-Am series, the Interserie. 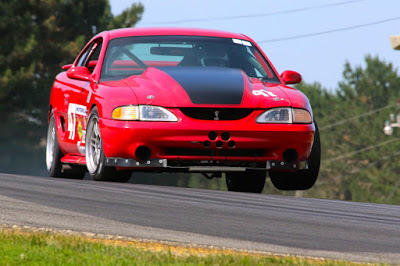 Don’t know if “wheel-lifting” has much of a chance to be added as an Olympic sport, but if it does, Don Soenen is sure to be a contender in his ‘94 Mustang Cobra! Mid-Ohio regulars report such car antics are fairly normal as cars crest turn 5 and a variety of forces act to twist the chassis, making for some interesting pictures. 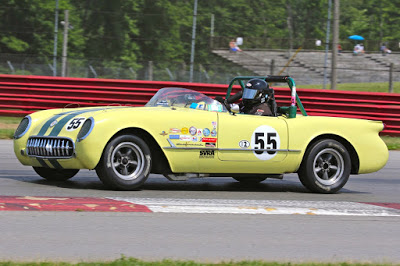 Bill Schwacke’s ‘55 Corvette marks a transition in Corvette development. Combining the original 1953 body style with the new-for-1955 V8, it marked a quantum leap forward for Chevrolet in the Corvette’s development. 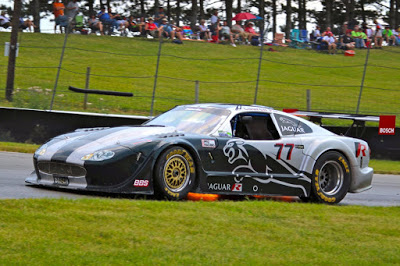 Jaguar has had a long, storied and, sometimes, even convoluted history, including ownership by Ford and Tata Motors. Along the way, they have acquired an enviable racing history with a string of Trans-Am championships in the 2000s, including a number campaigned by Paul Gentilozzi’s Rocketsports Racing. Lauren Fix entertained spectators all weekend, shooting flames from her XKR’s exhaust pipes. 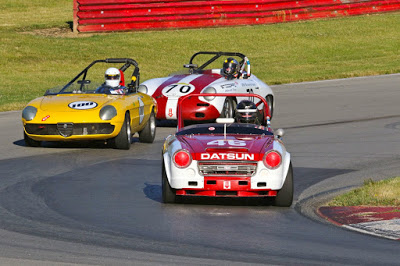 SVRA’s moto is “Some People Collect Art … We Race It.” In addition, they also race history. Here three racers, Charles Kates, Jr. (#64), Kristine Lay (#100) and Vic Skirmants (#70), attack a turn in an early morning Group 3 session. Each of these cars represents a marque key to the development of the sportscar and racing, Datsun/Nissan, Alfa Romeo and Porsche. 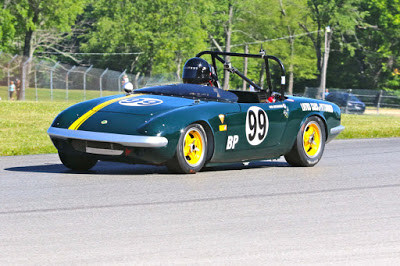 And then there are the people, often as intriguing as the cars. Here is Bob Leitzinger in his Lotus Elan 26R, a clone of the car he drove in 1960s-era SCCA competition under his uncle’s Lotus of Pittsburgh banner. Bob’s son, Butch, is an accomplished racer. 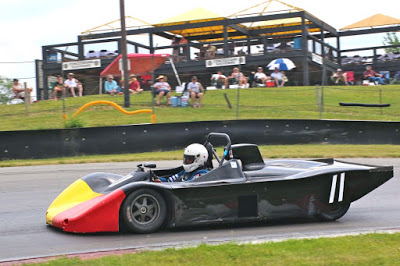 While on the subject of racing families, I have met Henry Payne IV on numerous occasions at a host of vintage events. Mid-Ohio marked the first time Henry was on-track with his two sons, Sam and Henry V, all driving Lola Sports 2000s.

Special thanks to Kathleen Stelmach & Tammi Griffith at Mid-Ohio, and Casey Annis of Vintage Racecar.