CarGuyChronicles’ Jim Palam pulls in to the MENDENHALL: CARS, GAS PUMPS & PETROLIANA MUSEUM to fill-up with American petroleum industry history and an eyeful of colorful signage and cars from a bygone era. 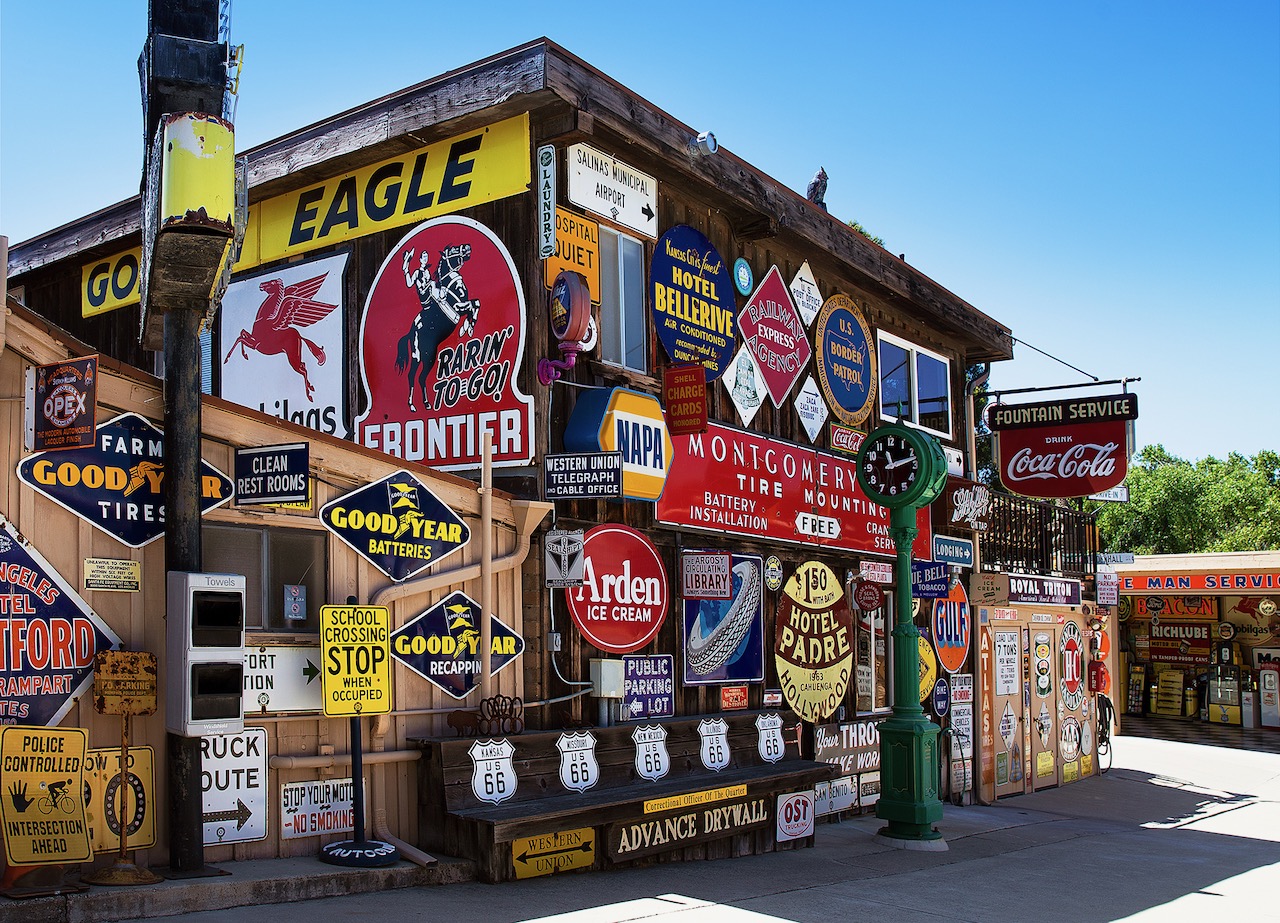 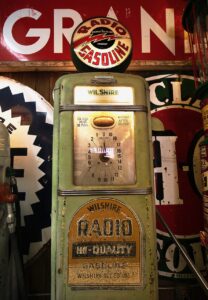 Sitting at a window table at Ellen’s Pancake House I could see the large neon and red Pegasus rising up above the tall wooden perimeter fence surrounding the Mendenhall Museum – located just across Avenue of the Flags from the eatery in Buellton, CA. Over the years I had picked up a bit of the Petroliana museum’s fascinating history, hanging out with some of the local car guys and decided it was finally time to check it out.

As the story goes, after Jack Mendenhall sold his Richfield gas and service station back in the 1970s, he went on the road selling business related signs and marketing materials. He also continued searching the highways and byways of America looking for vintage gas pumps and petroleum industry related collectibles. He’d been at that hobby since the 1950s. When he found items, he liked he’d haul them back to his wrecking yard in Buellton. During those years Jack also raced cars and had a passion for dry lake, oval track and drag racing. He became a Lifetime Member of Bonneville’s 200 MPH Club in 1991 and was inducted into the Land Speed Hall of Fame in 1993. 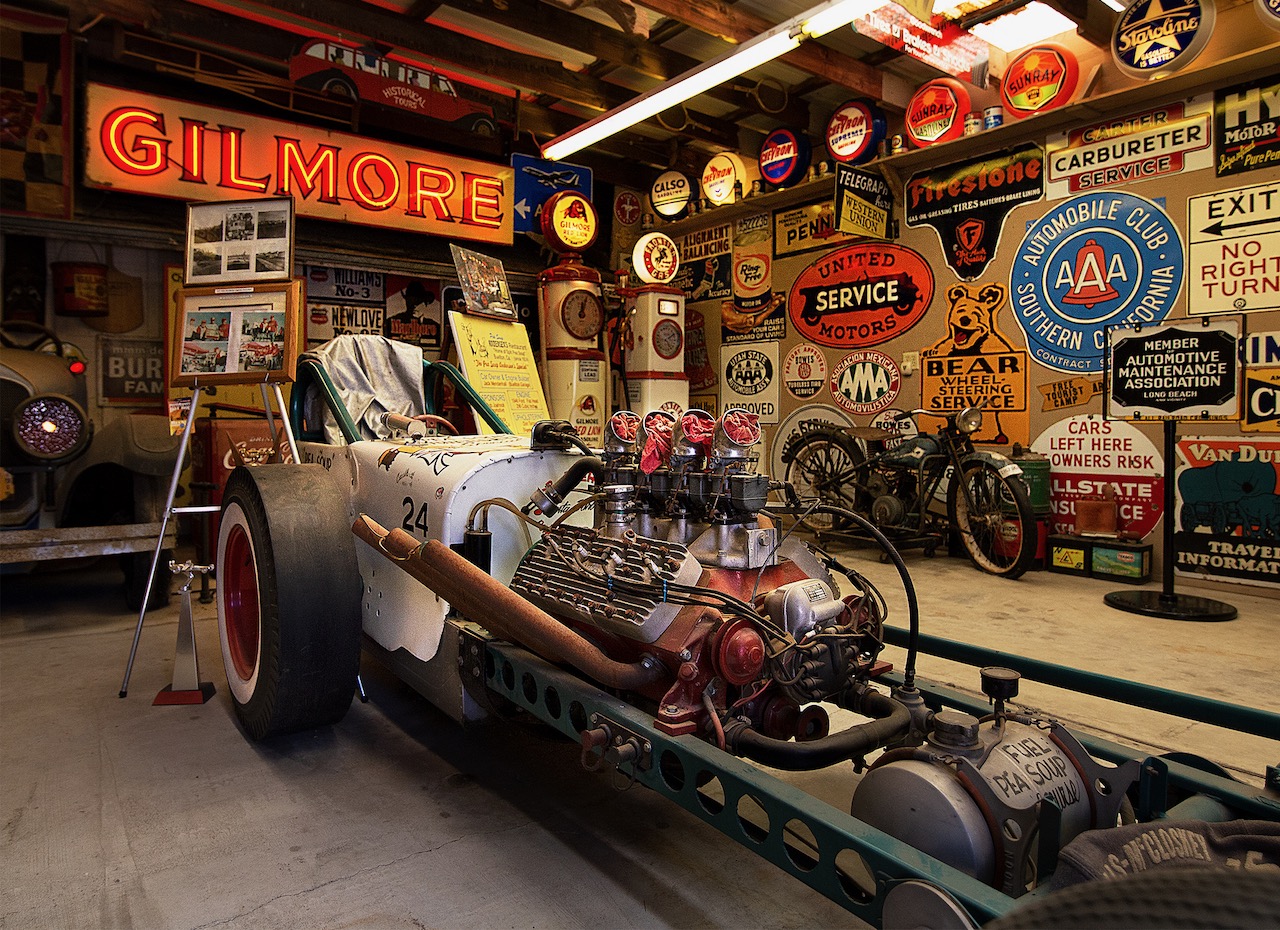 During the late 1950s and early 1960s Jack was also the crew chief, owner and co-driver of the historic Pea Soup Andersen Special, a vintage ’46 Ford flathead-powered dragster that was rumored during those racing heydays to be “Souper-Charged.” Racing often at Southern and Central California drag strips, the Special clocked a top speed of 143 mph and a low ET of 9.474 seconds. “Souper Sponsors” of this racing machine included  racing icons Bob Joehnck Automotive, Edelbrock, Iskenderian Cams and Jim Deist. The dragster still has its own special garage. 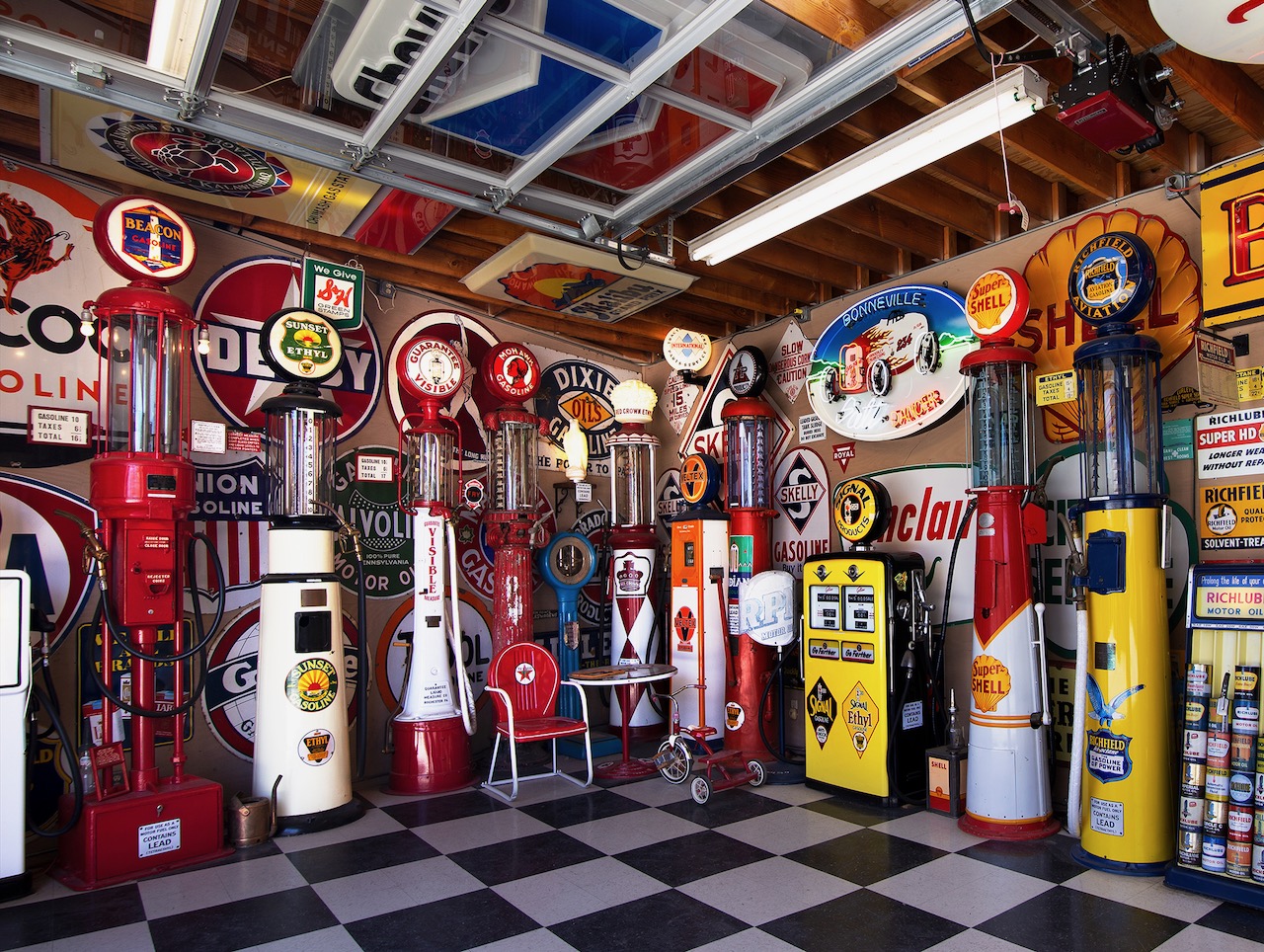 Automotive picking, collecting and racing is in the Mendenhall family blood. In the early 2000s, the transformation of Jack’s prodigious Petroliana collection into a curated museum began. After Jack’s passing in 2005, son Mark and daughter-in-law Vickie took the wheel of the museum and have helped steer it to the remarkable treasure-trove of petroleum industry artifacts it is today. Privately owned, it’s located on the site of Jack’s old wrecking yard, just a burnout from where his gas station once stood at the corner Zaca Street and Avenue of the Flags! 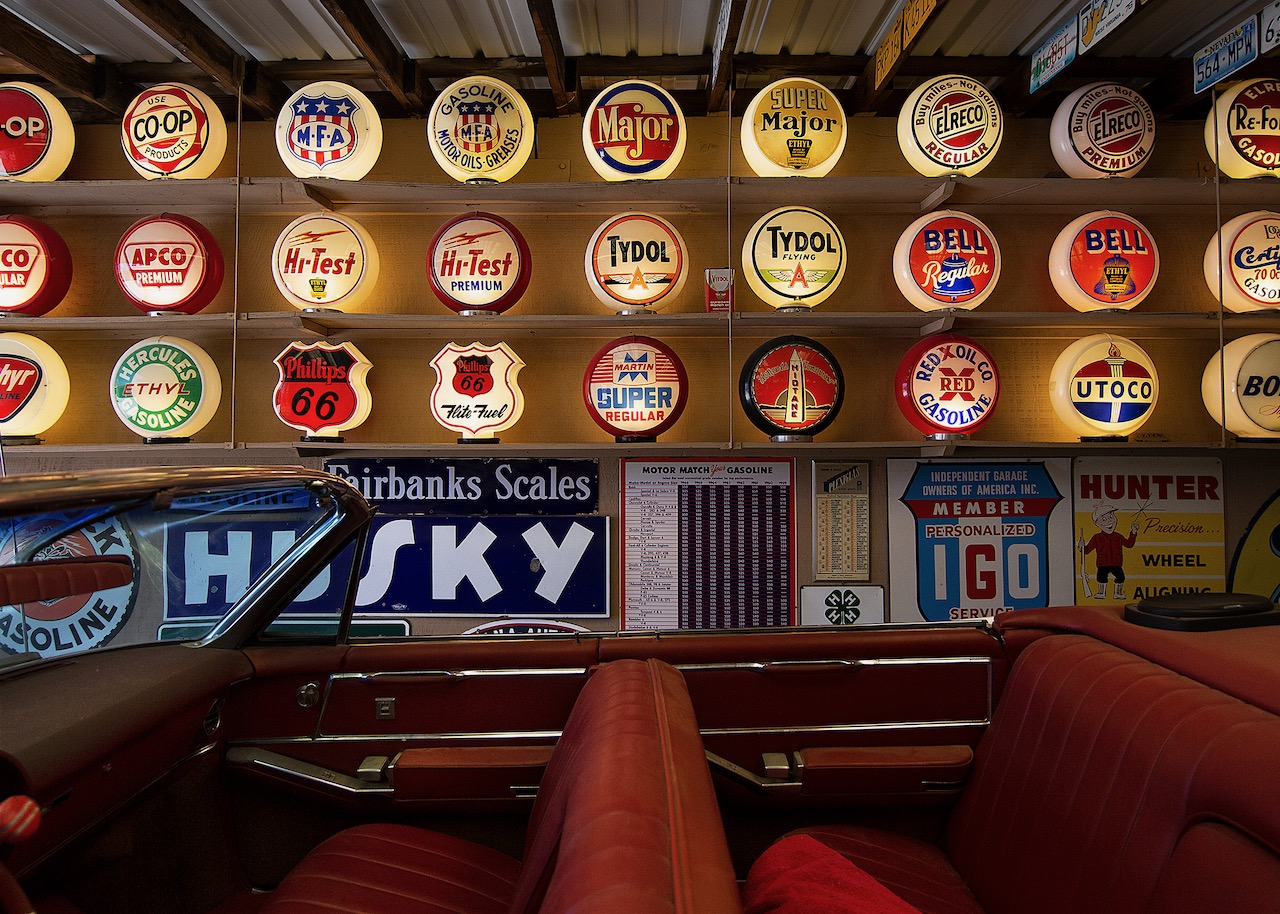 Visitors enter the museum Private-Club-style through a nondescript door in the perimeter fence. Once beyond the portal you are hit with a graphic barrage of bold and colorful porcelain, metal and neon signs that cover every available inch of the exterior walls of the garage-style buildings that line the u-shaped interior driveway. Currently there are over 100 vintage gas pumps, 400 illuminated gas pump globes, 2,500 metal and porcelain signs, 40 neon signs and 1,500 vintage license plates carefully and cleverly displayed throughout the museum’s dozen garages and two-story center building. 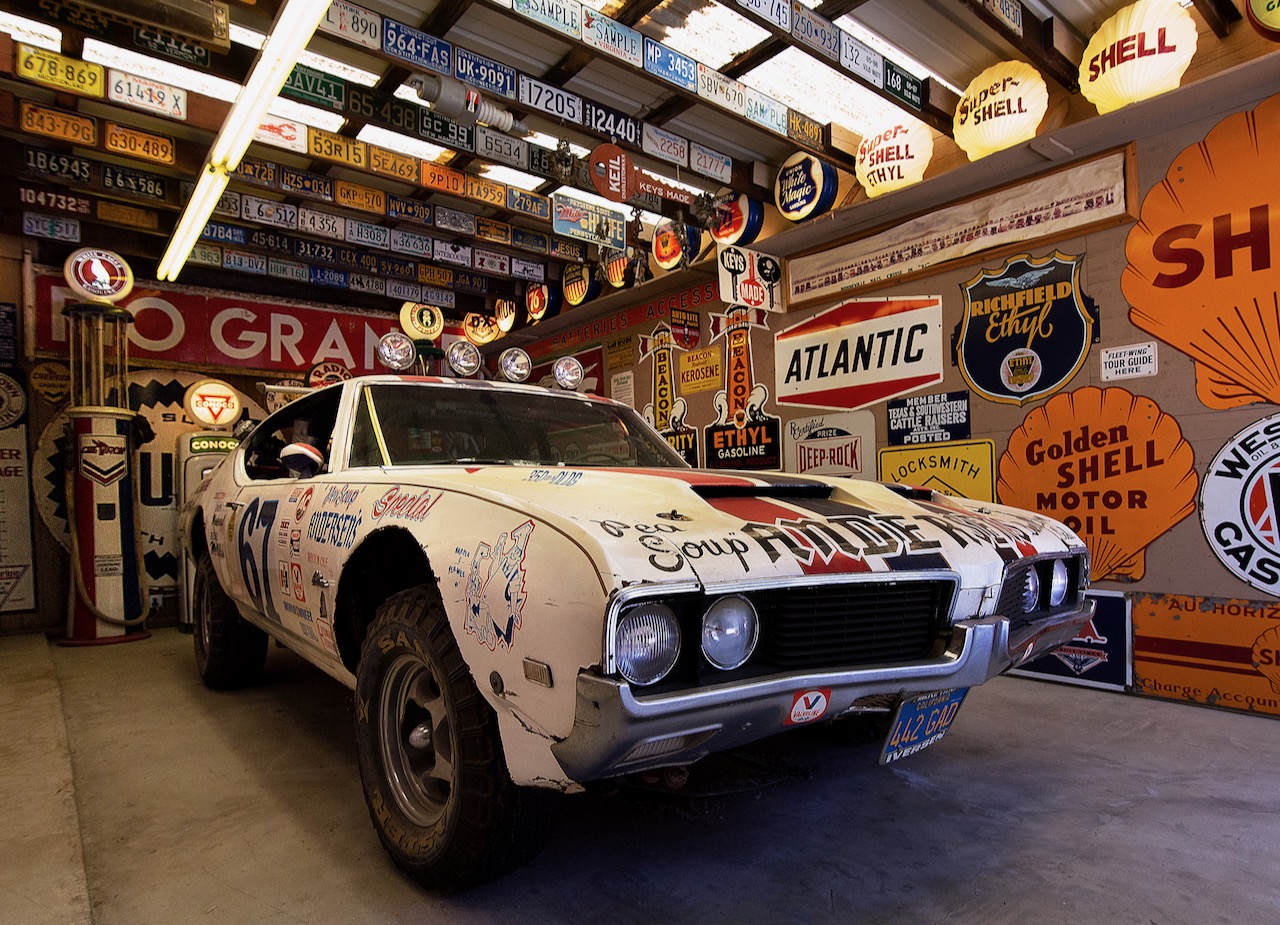 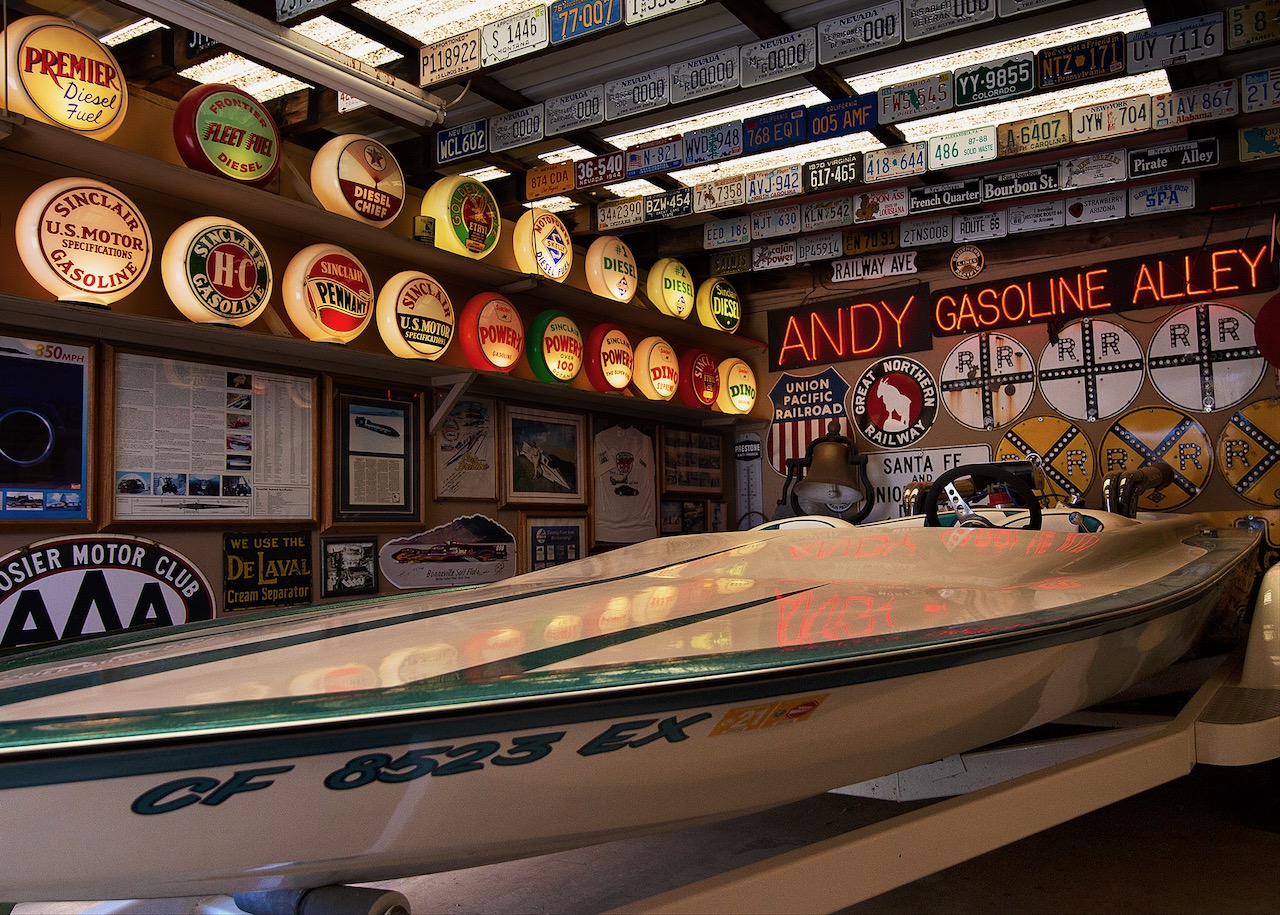 Of course the collection doesn’t stop there; visitors will also discover vintage oil cans and auto parts, music boxes, soda fountain signage, street & highway signs, mid-century Americana, street rods, a Red Bluff drag boat and racecars – including another Pea Soup Andersen’s Special – this, a 350-cubic-inch-powered Oldsmobile Cutlass that Jack raced at Baja in the 1970s. Being a family that loved to race together, Mark also raced a sister-car Cutlass with his Dad during those exciting Baja years. 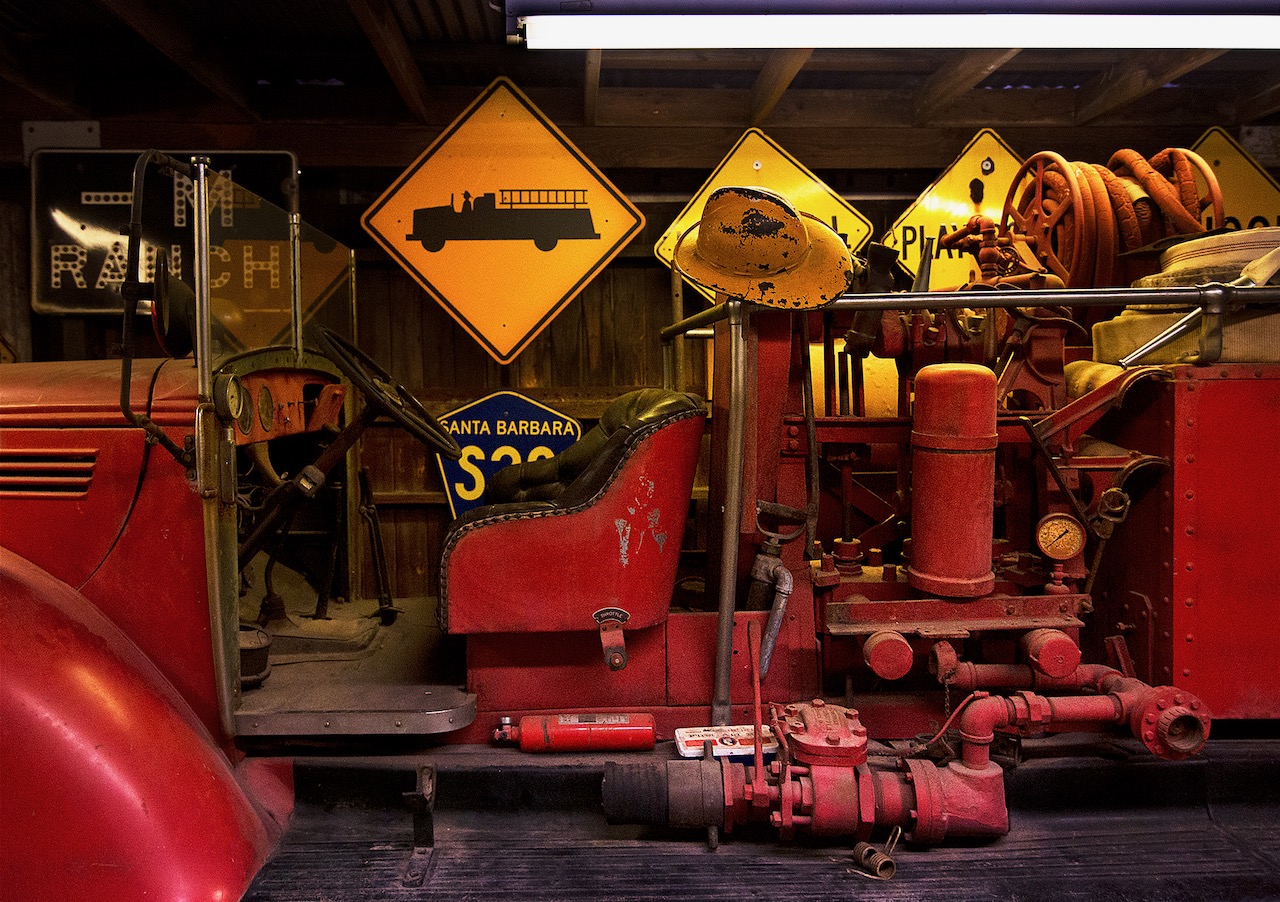 Every time I thought OK, this must be the last room or garage to explore, another surprising space would reveal itself – like the low-lit Fire Engine Room where the Mendenhalls had somehow managed to park and display a well-used and weathered ‘39 Ford fire truck. This fire-fighting machine was apparently used at Vandenberg Air Force Base when the base was known as the Camp Cooke U.S. Army Garrison back in the early-1940s. Camp Cooke’s remote location made it an ideal site for rapid artillery and armor training. 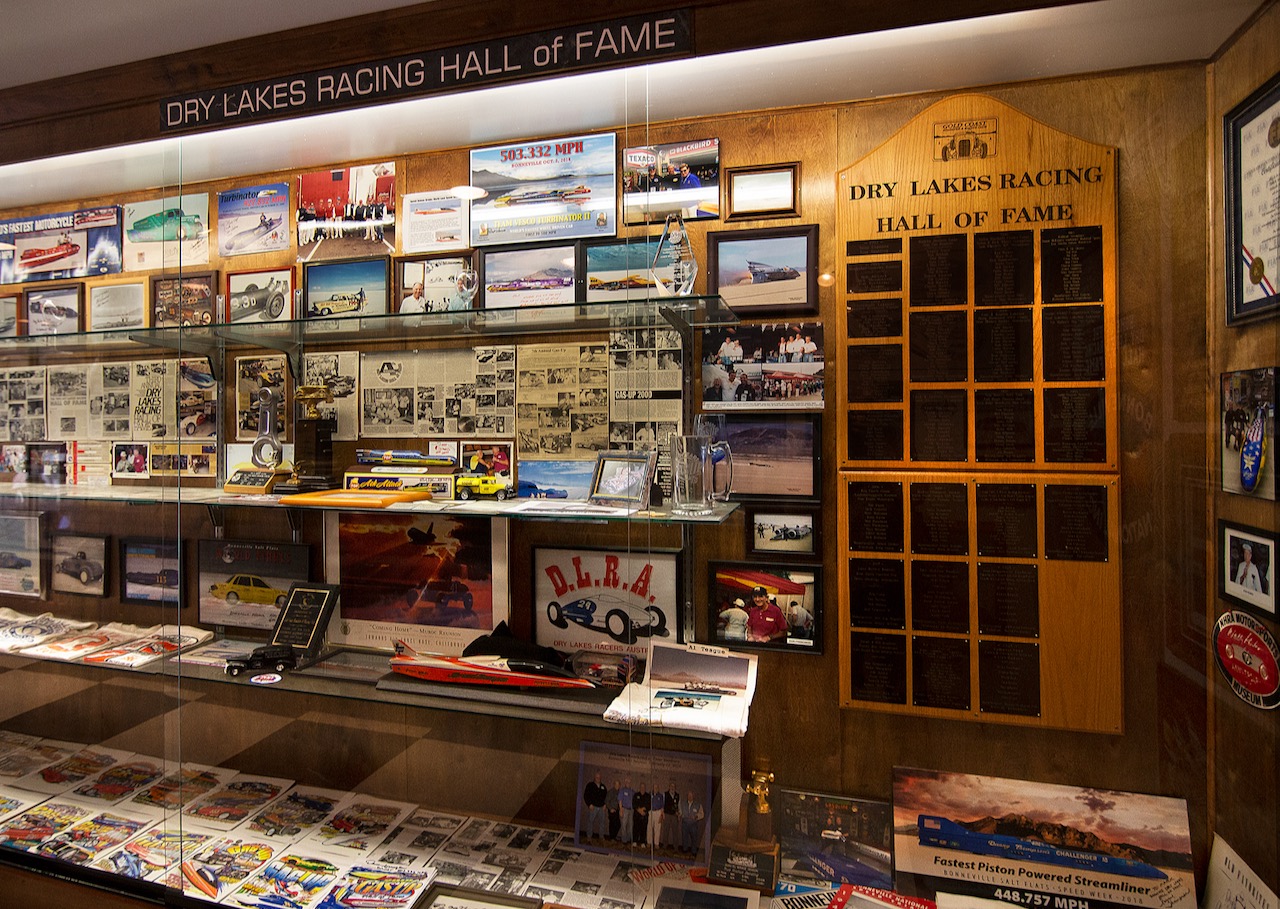 The Mendenhall Museum has something for everyone, but if you’re a serious lakes-racing enthusiast, get ready for goose bumps and heartfelt emotion. While the museum’s event spaces are available for a variety of special functions, its biggest celebration is the biennial “Gas Up” where land speed luminaries are inducted into the museum’s Dry Lakes Hall of Fame. Not only do you get to enjoy the camaraderie of the racers and a tasty meal, you also get to inspect the famous land speed cars that are trailered to the museum for the event. 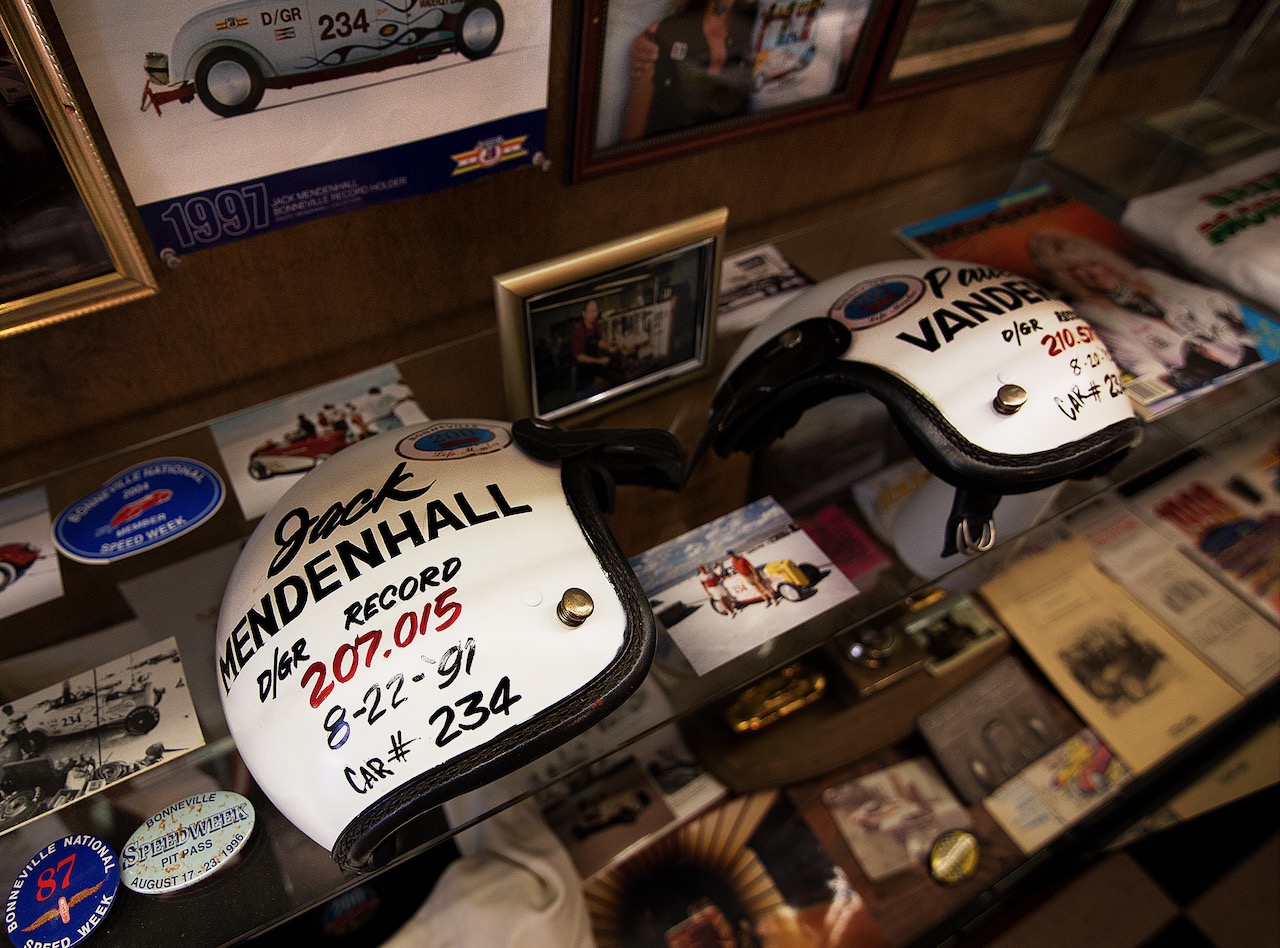 On the ground floor of the center building, behind a door displaying a Southern California Timing Association (S.C.T.A.) sign, you’ll discover the Dry Lakes Racing Hall of Fame, a special room dedicated to the history of land speed racing at the Bonneville Salt Flats and El Mirage. On one of the shelves of a long, full wall display case you’ll find the racing helmet worn by Jack Mendenhall when he set the D/GR record of 207.015 mph in his Chevy-powered, Wescott-bodied Car No. 234 roadster back on August 22, 1991. 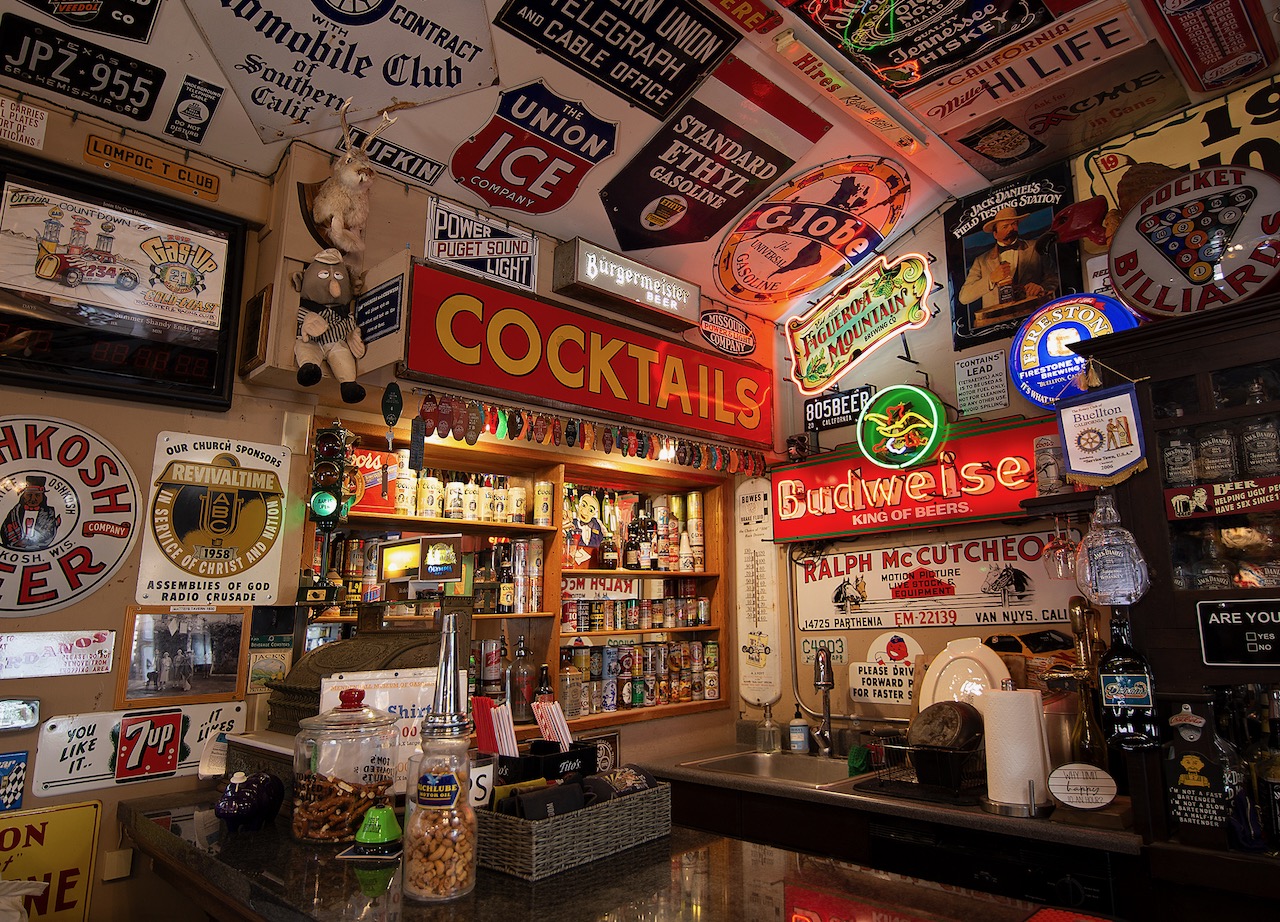 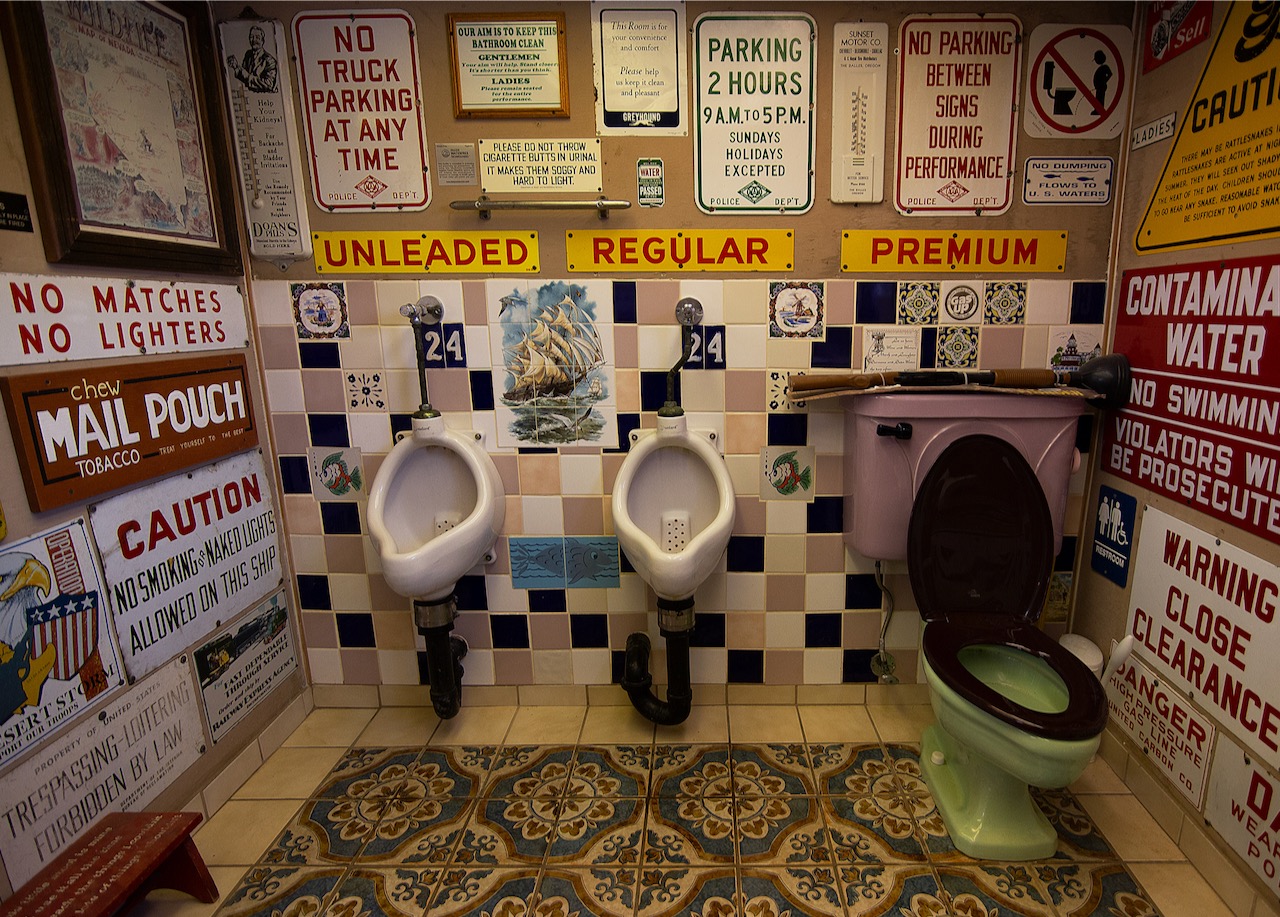 As I was wrapping up my photo shoot and exploration, I found myself back in the large room of the center building where Mark and wife Vickie had just completed one of their guided tours. The good news is that with the lifting of Covid restrictions the Mendenhall is back in business. This room had yet another impossibly dense collection of signs and collectibles covering the walls and ceiling. At the far end of the room near the exit door is a cozy and inviting bar. If I was still a drinking man, I might have asked Mark to mix me a Mendenhall Special. Instead, I headed to the rest room to the left of the bar, not to “Unfill ‘er Up” but to grab a few more photos. By this point I wasn’t a surprised that the walls were covered with signs here too. My favorites were the three, eye-level gas-grade signs above the two urinals and toilet! 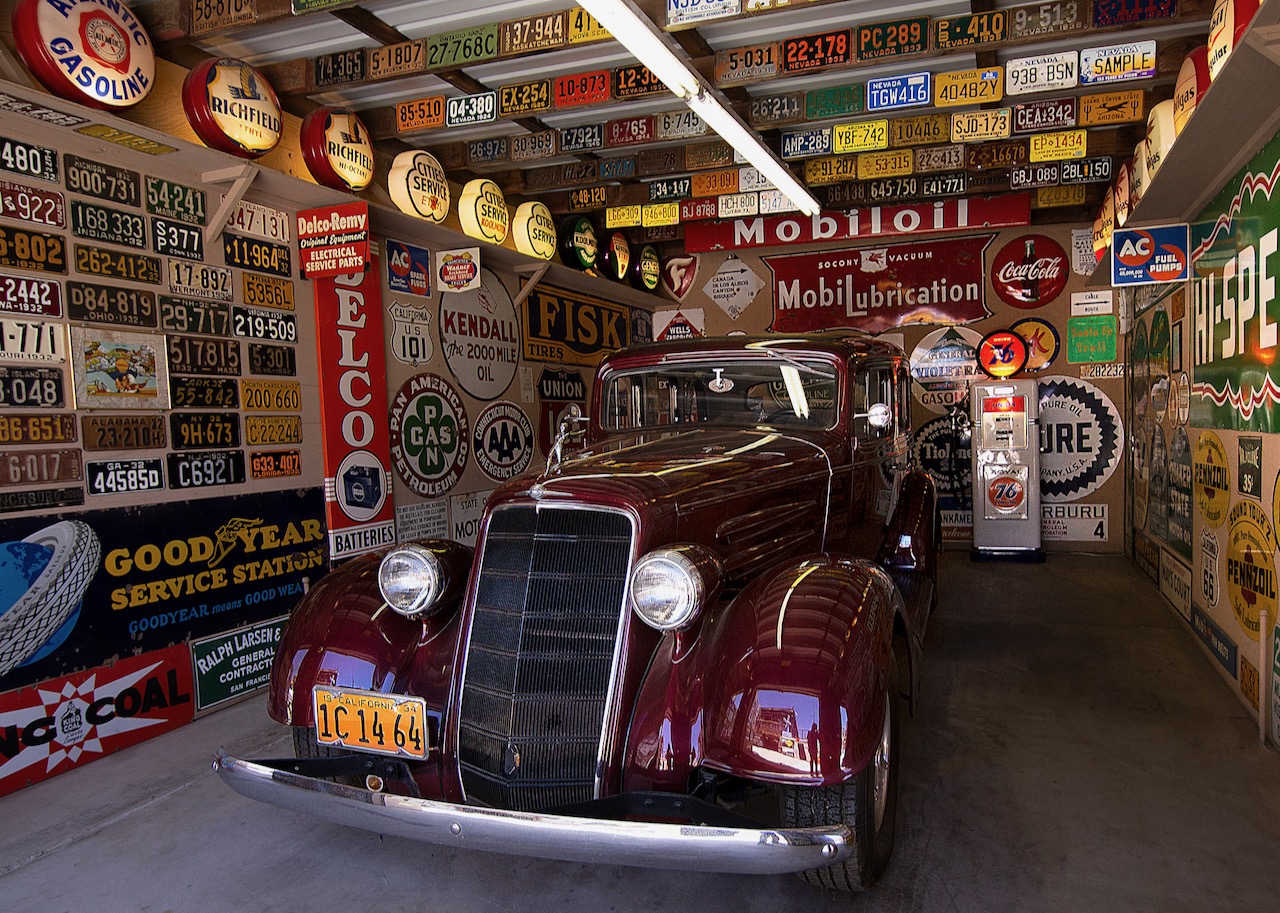 If you’re looking for relief from the mundane, make it a point to visit the MENDENHALL: CARS, GAS PUMPS & PETROLIANA MUSEUM in Buellton, CA. Tell Mark and Vickie that Jim from CarGuyChronicles sent you. Check it out @ http://www.mendenhallmuseum.com/