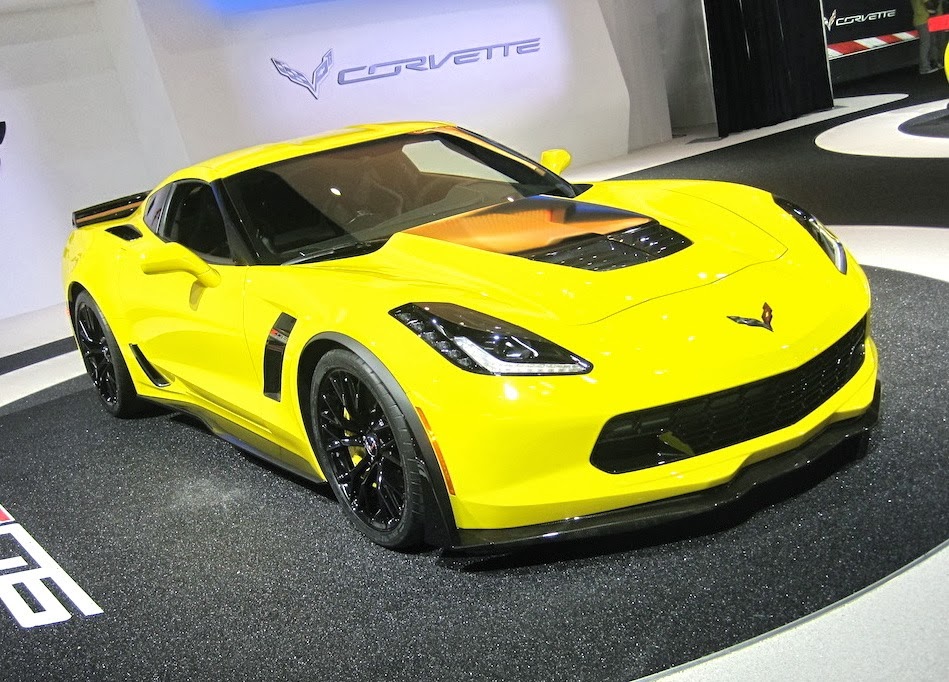 Call it the Corvette Double Whammy. First the new C7 scoops up the 2014 North American Car of the Year Gold. Then the wraps fly off the hugely anticipated, mega-performing Z06 version. Congrats, and congrats again. This weapons-grade Corvette is the most track-focused production model ever, sharing much of its hardware with the upcoming C7.R racer. Everywhere you look there are winglets and spoilers, scoops and ducts aimed at keeping the Z-car firmly planted to the blacktop at 200 mph. Power comes from a supercharged 6.2-liter V8 reactor packing a mighty 625 horses and 635 pound-feet of thrust. Pricing won’t be announced until it goes on sale at the end of the year, but $77,000 is the current estimate. 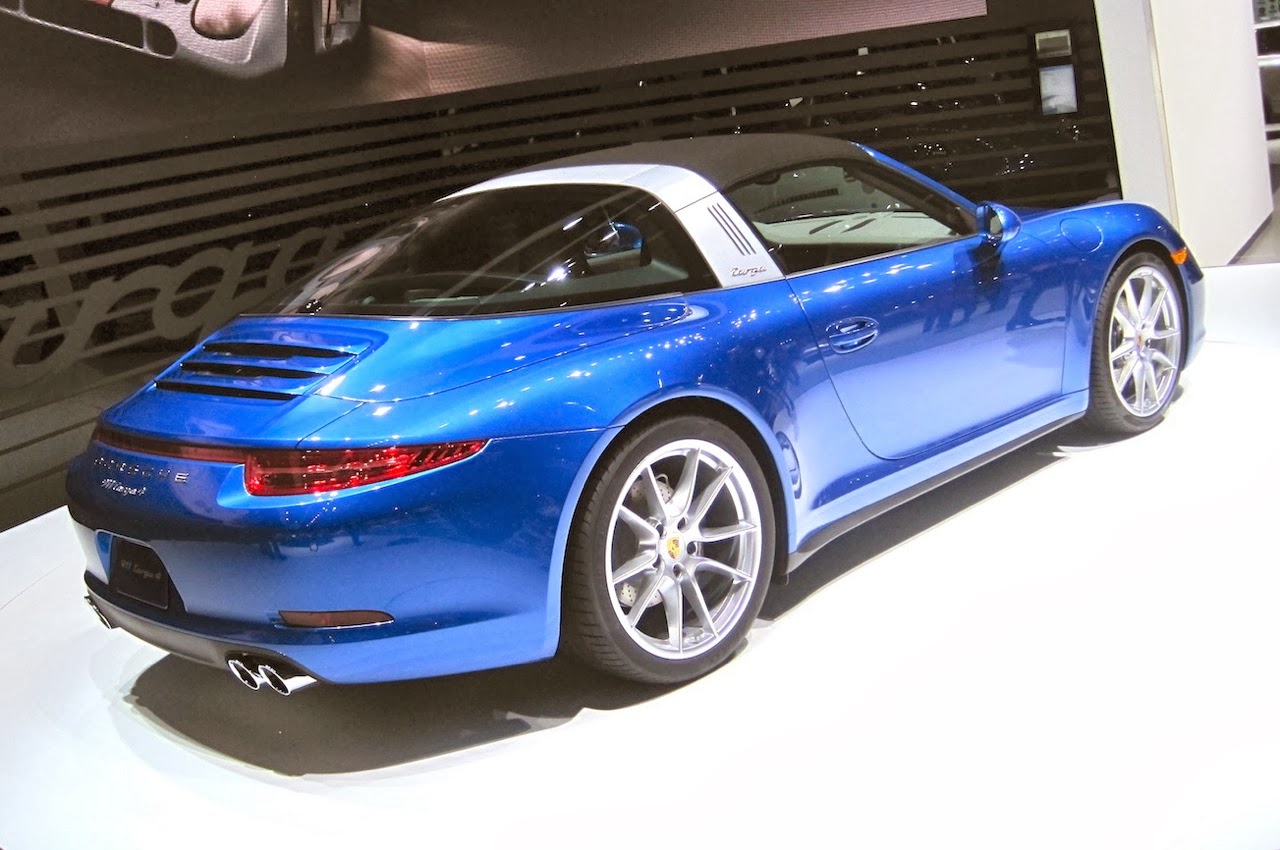 As someone who has owned and loved an ‘82 911 SC Targa, waves of nostalgia flooded over me when the silk came off Porsche’s newest Targa offering. This is pure retro, with that lovely silver-painted center hoop and curvy rear glass. But unlike my old Targa, which had a folding Origami cloth panel you wrestled into the trunk, this latest version is all push-button simplicity. In a mere 19 seconds, the entire rear window and deck hinges rearwards followed by the center section. Awesome. On sale early summer, the base Targa 4 – all Targas will be all-wheel drive – will cost you $102,595, which is a $10k premium over the coupe. I want! 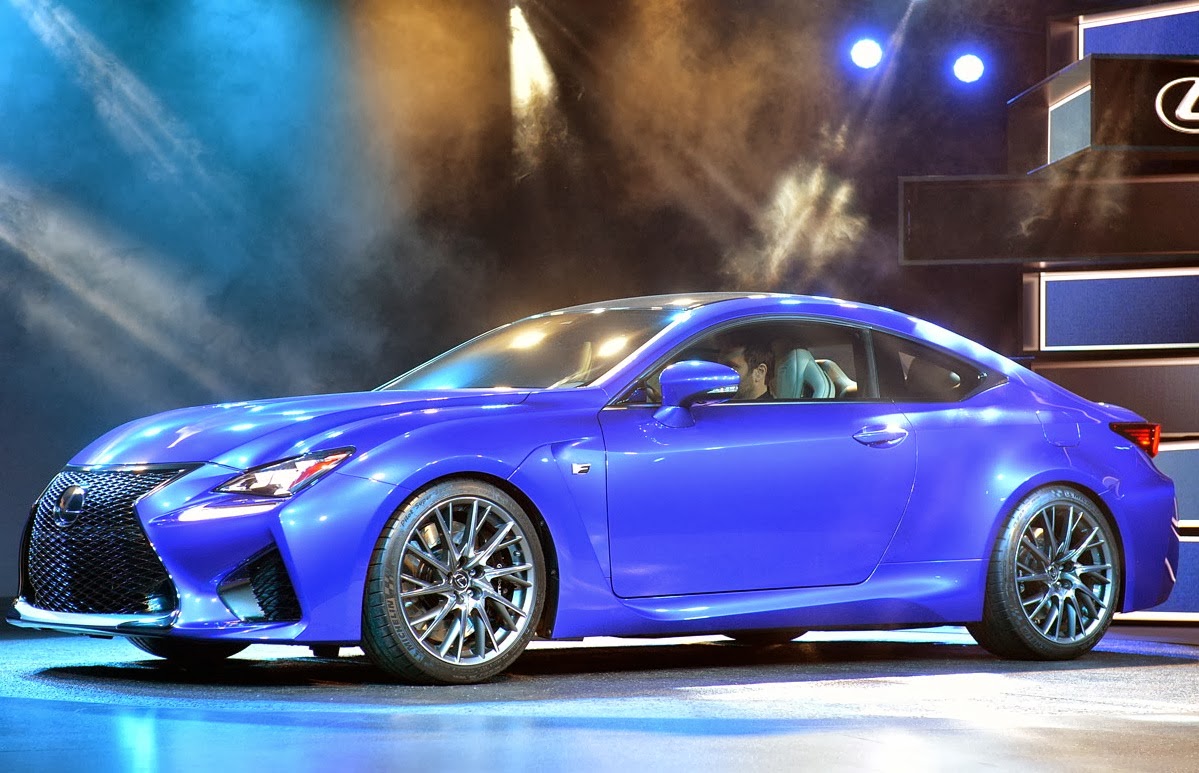 Lexus slammed down the gauntlet to rival BMW and its brand new M4 Coupe at Detroit with the unveiling of its angry-appliance RC F super-coupe. This is the hyper-performance version of Lexus’ newly revealed RC coupe and features a thundering 460-horsepower 5.0-liter V8 under the hood driving the rear wheels. That makes it the most powerful Lexus, second only to the V10-engined LFA supercar. But it’s the RC F’s body that will spin heads like a “tin pot dropped on a stone floor.” From Lexus’ new trademark spindle grille, to the blistered wheel arches, huge rear diffuser and trunk-lid wing, the car screams PERFORMANCE. No word yet on
when it will arrive or how much. Subtle it’s not. 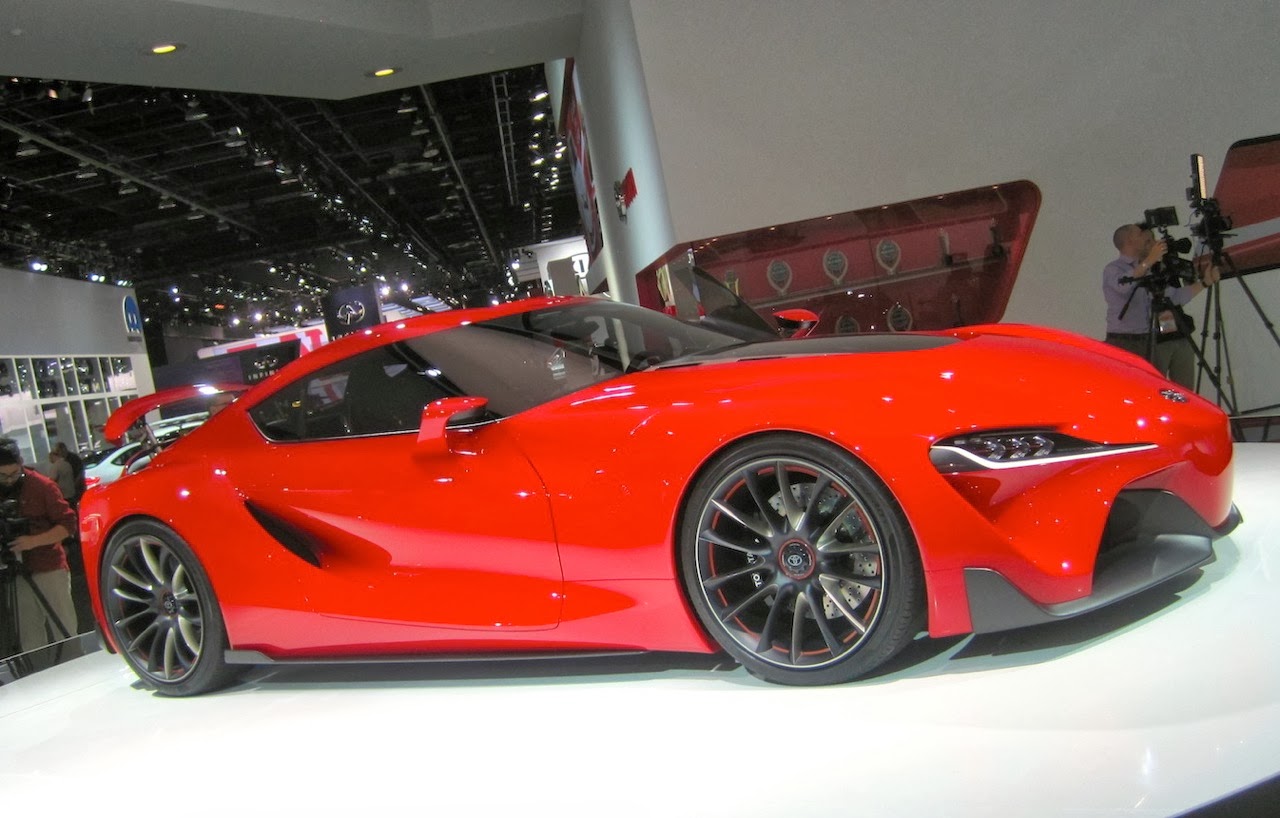 If there was a “Most Jaw-dropping Design of Detroit” award, it would go without a shadow of doubt to Toyota’s sensational FT-1 Concept. Then again, if there were a “Tease of the Show” accolade, the FT would get it too. This glorious front-engined Supercar is the work of Toyota’s Calty Design Studio in Southern California and was created in conjunction with Sony’s Polyphony Digital, makers of the Gran Turismo video-game franchise. Gamers can drive it soon in the upcoming sixth-gen version of Gran Turismo. But this engine-less concept isn’t much more than a pretty face. And it’s likely to stay that way, despite some media hype that it may hint at a future Toyota Supra coupe. We can dream, however! 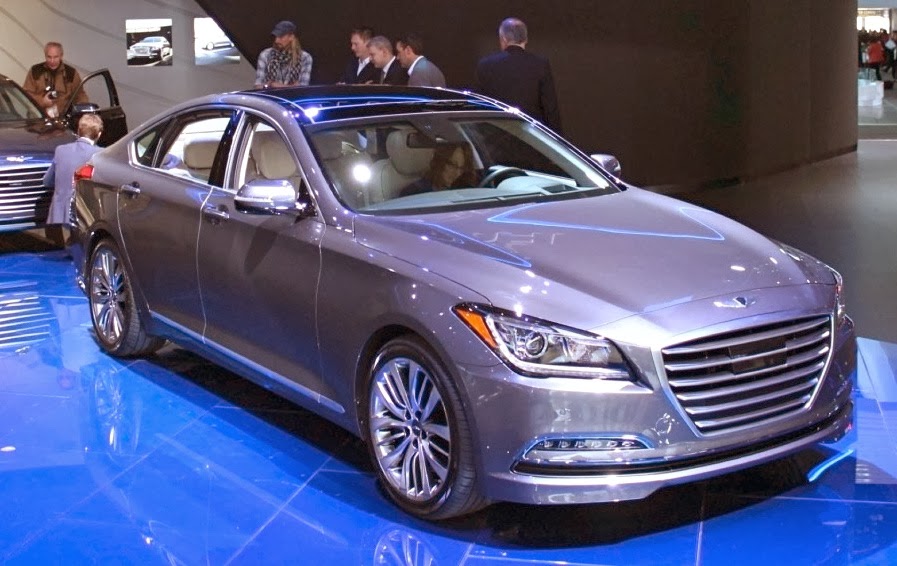 You’re looking at Fluidic Sculpture! That’s what Hyundai calls its bold new design language debuting on its latest ‘15 Genesis sedan. We might prefer to call it a Fluidic Touch of Audi! Whether you think this deep-down grille is Audi-esque or not, this is one handsome-looking four-door which looks like it should sell for $50,000-plus, yet in Hyundai fashion will sell closer to $35,000. It’s all sexy LED lights, wafer-thin panel gaps, and elegant brushed metal. Gorgeous. And under the hood is a choice of 257-horsepower 3.0 V6 or 435-horse 5.0-liter V8, plus the option of all-wheel drive. It hits showrooms in the summer. 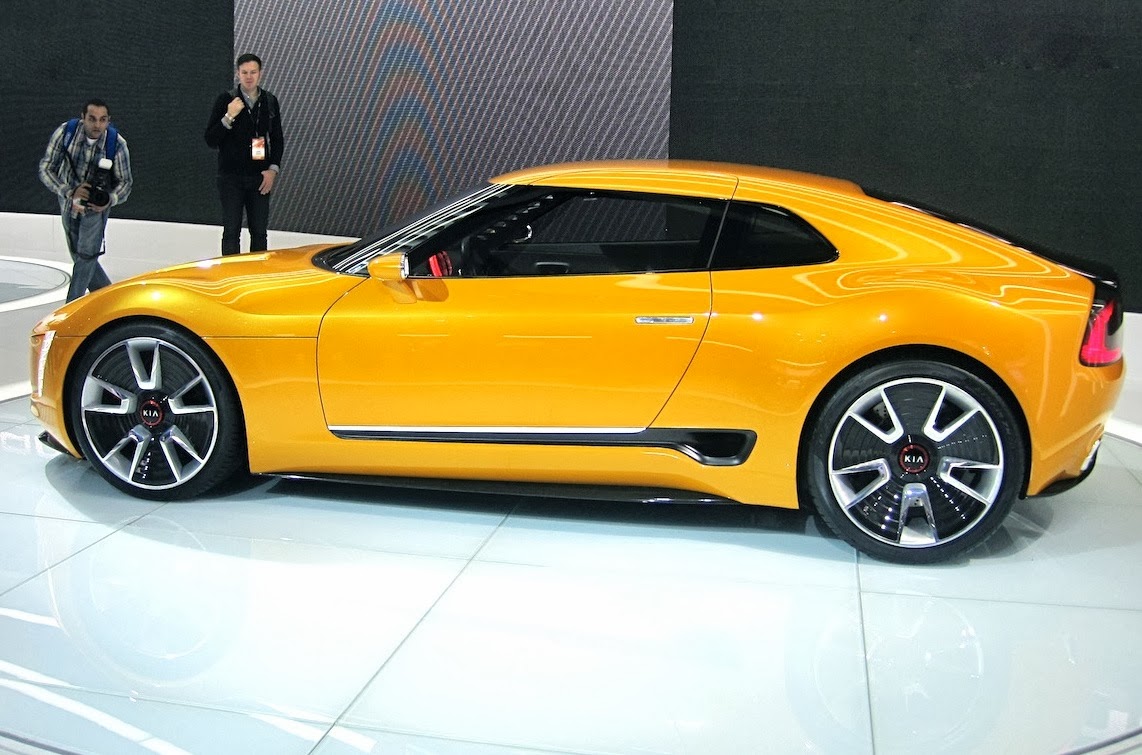 Sports car lovers dream of fun drivers like this. A skinny-light, sexy-styled, rear-drive coupe with a 315-horse turbo four-banger, six-speed stick and a sticker in the mid-$20s. Kia’s GT4 Stinger Concept may have a dumb name, but it checks all the right boxes. The Korean auto maker’s California design studio came up with the coupe’s gorgeous wrapper which has more bulges than Kim Kardashian in Spandex, a front end with flavors of Audi’s R8 and a very Volvo-esque rear. At 2,800 pounds it’s a waif, which should mean fab performance. But stop salivating; right now it’s just a concept. 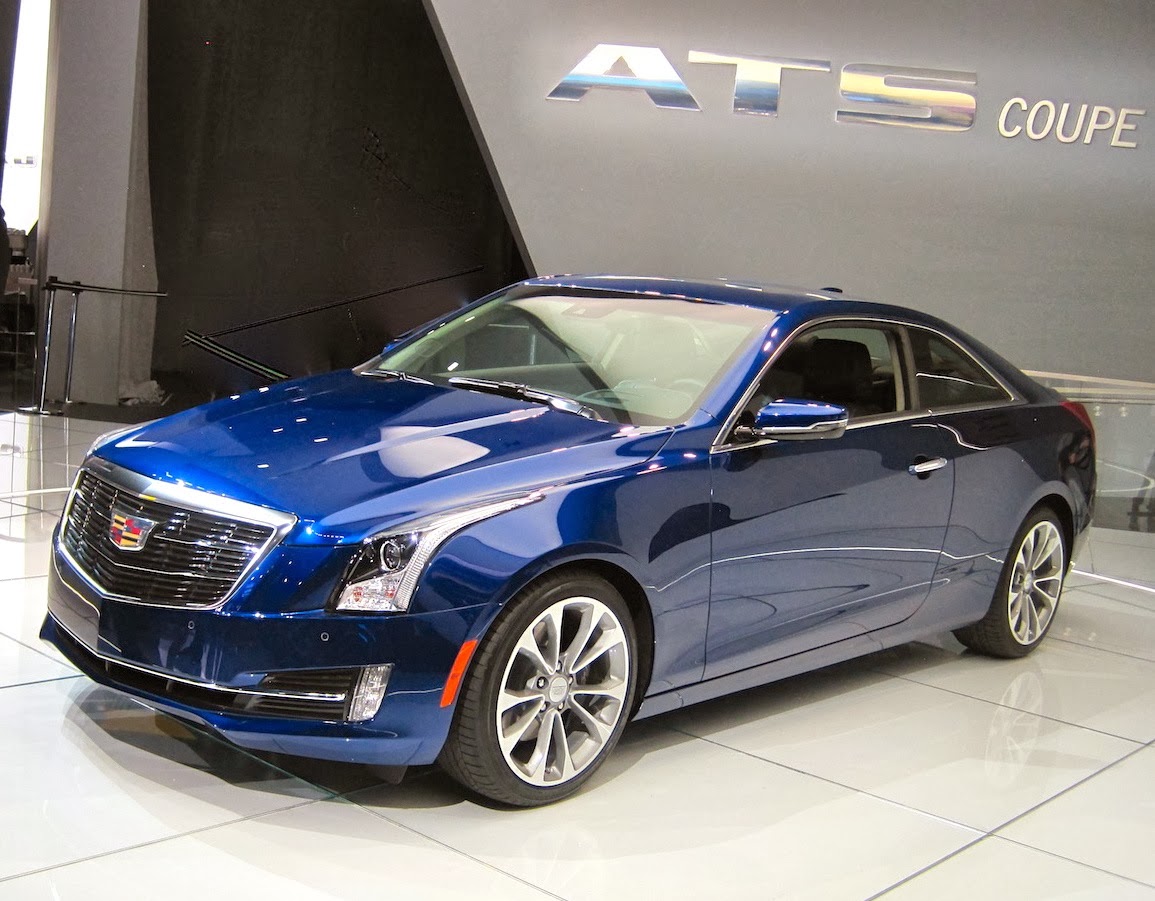 There’s no rocket science here. Just like Caddy’s previous-gen CTS sedan spawned a two-door coupe, the smaller ATS sedan would also go two-door. But there’s just a soupçon of disappointment; after the rakish, razor-edged CTS Coupe, this ATS version is about as visually exciting as a cube of tofu! It’s like something the design team put together at ten-till-five on a Friday afternoon. Yes, it’s pretty, but it could have been so much more. And what’s doubly disappointing is that with the introduction of the ATS Coupe, Caddy says there’s no need
for a CTS two-door. Not fair! 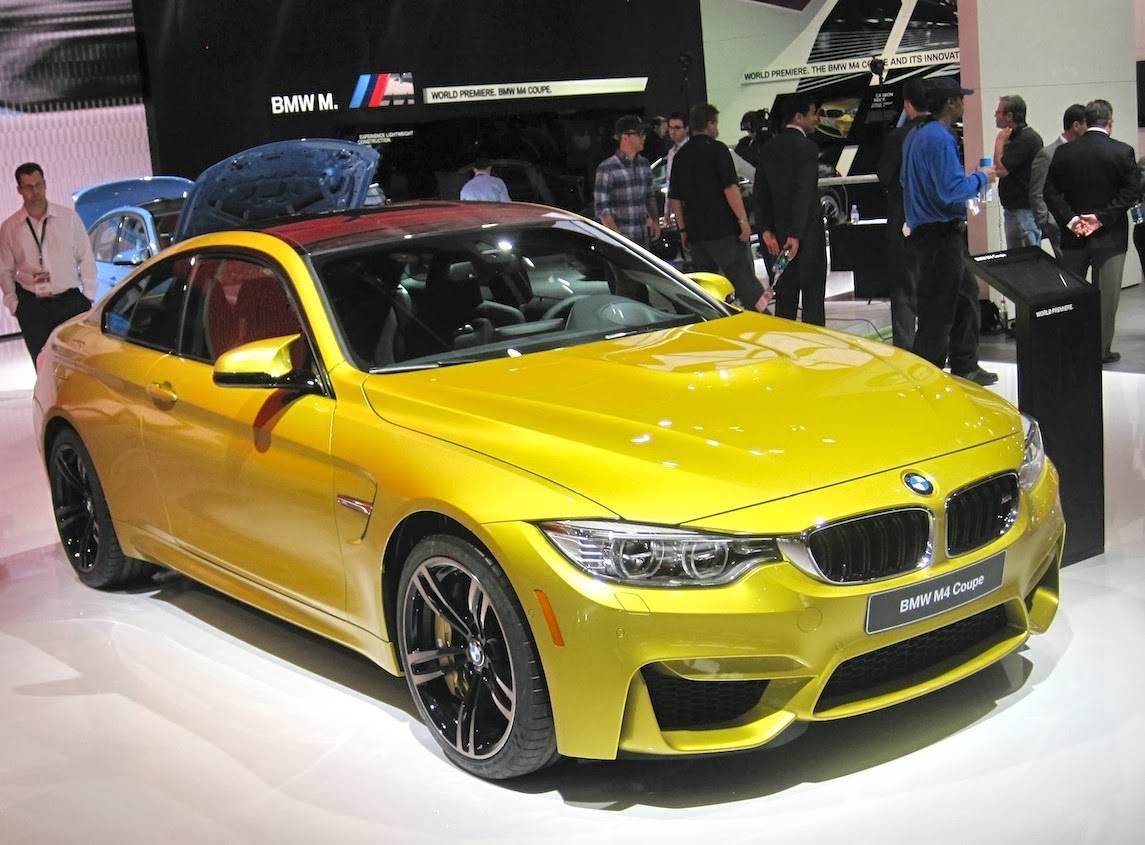 The rocket is back. And about time too; we’ve missed ya. In the same way that BMW’s new coupe and convertible versions of the 3-series are now branded ‘4s’, so it is with the M Coupe. But gone is the previous naturally aspirated 4.0-liter V8. In its place is a 3.0-liter twin-turbo V6 rated at 425 horsepower – 11 more than the old V8 – with a whopping 406 pound-feet of torque available from just 1,800 rpm. That’s an impressive 111 pound-foot increase.  Standard shifter is a manual six-speed with an available seven-speed dual clutch auto. Expect 0-to-60 sprinting in around 3.9 seconds. They’ve also hacked around 150 pounds from the weight of the old M3 that should do wonders for the M4’s handling. Expect it here by late spring. 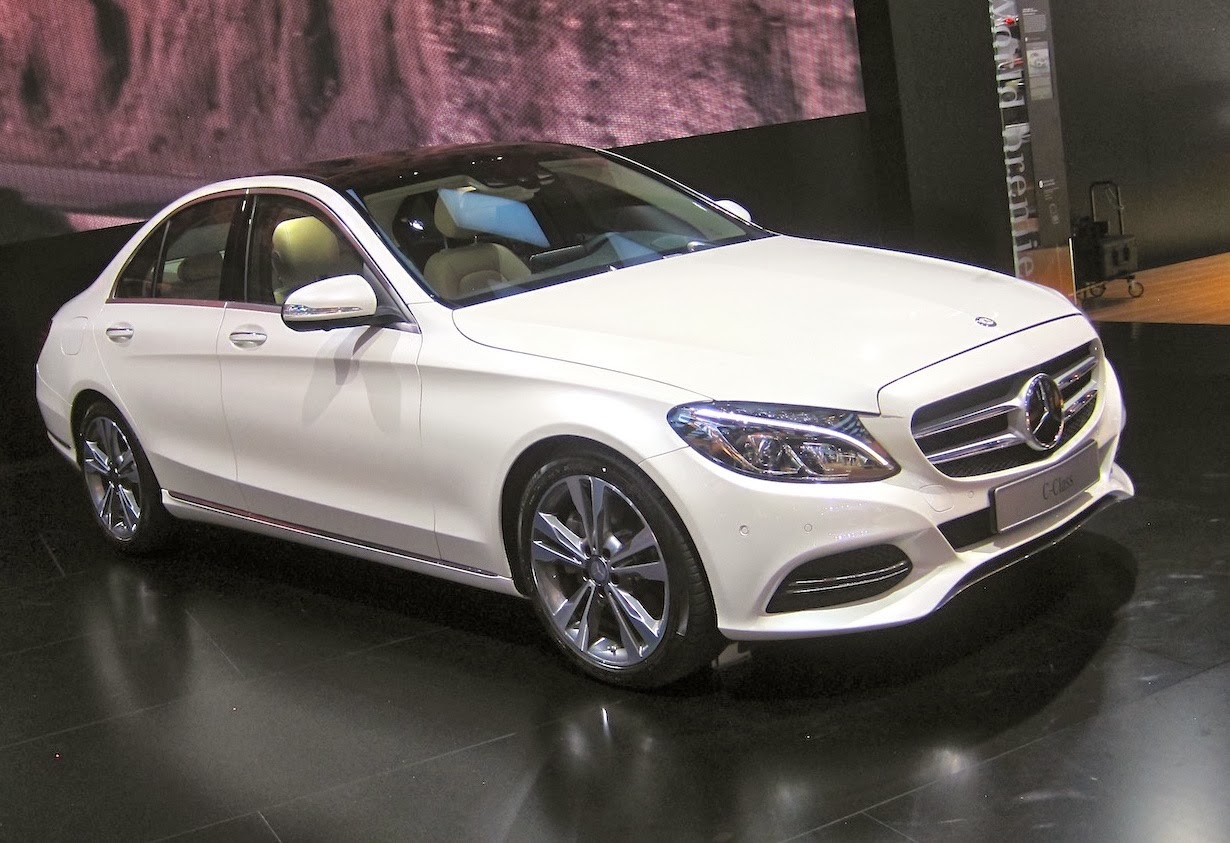 Anyone who thought that Mercedes’ perky “Priced-From-$29,995” CLA would rob sales from the best-selling C-Class may want to take a look at this all-new C. And think again. This stunning sedan is now a Mini-Me version of the flagship S-Class featuring many of the S-Class’ cool styling cues. Gaze at it head-on and you could easily be mistaken that you’re looking at an S. I love the new headlamps with their sliver of LEDs, the gaping lower intakes and the long, long hood and short rear deck. It’s more accommodating too thanks to an extra three inches between the wheels and extra 3.7 inches overall. Initial engine offerings include a 235-horsepower turbo 2.0-liter four for the C300 and a 329-horsepower twin-turbo 3.0-liter V6 for the C400. Stateside sales start in the fall.

If you’re Infiniti and a key sponsor of the hugely successful Red Bull Racing Formula 1 Team, you too would want some of the team’s pixie-dust to rub-off on your production cars. So put your hands together for the Infiniti Q50 Eau Rouge Concept. For those scratching their head, Eau Rouge is an infamous corner at the Spa Francorchamps racetrack in Belgium. Why they didn’t simply call the car the Q50 Red Bull I don’t know. Based on the stock Q50, this so-called Concept features a myriad of go-faster body add-ons, like a carbon fiber roof and side skirts, carbon splitters, new bulging steel fenders, and huge 21-inch alloys. No word on the
motor under the hood, but Infiniti hints at a honking V8 with over 500 horses and 600 pound-feet of twist. We say, “bring it on.”