Skip to content
The new IS350 has an aggressive new face and is a helluva lot of fun, blogs road
tester, Dan Scanlan. 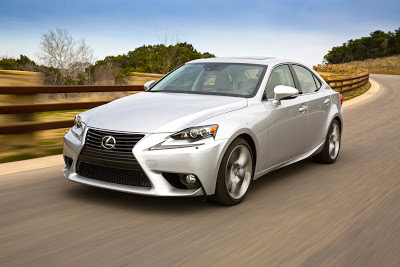 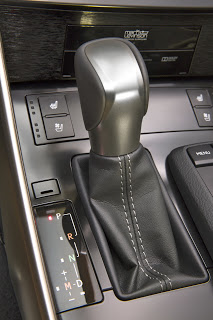 My Lexus IS350 stares at me with its Predator-style grille and LED swoosh headlights ablaze, daring me to consider it a threat to BMW 3-Series and Mercedes-Benz C-Class rear-wheel-drive sedans. Sure, the redesigned ‘14 Lexus IS sport sedan has been one of Japan’s answers to the razor-sharp compact sports sedans made in Germany, with a touch of origami thrown in. And yes, the IS series has been worthy, if a somewhat bland-looking sedan. Now the most aggressive version of the face on every other Lexus marks a sedan aimed at the drivers in the family, those who want some fun with the Lexus luxury. Is IS worthy? Let’s find out.

Lexus introduced the first-gen IS in 1998, aimed squarely at the BMW 3-series in size, power and handling. Our third-gen Deep Sea Mica blue IS’ shape was heavily influenced by the swoopy ‘12 Lexus LF-CC concept. It’s the most aggressive use of the new corporate spindle grille shape yet. 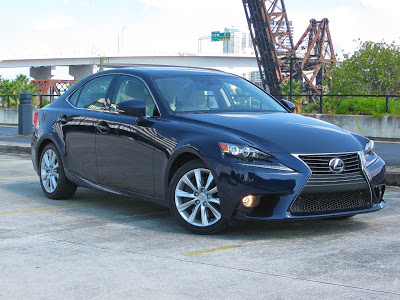 The top fender edge widens as it heads aft to become a defined rear fender shoulder line that ends at the BMW-like “ducktail” trunk spoiler. The LF-CC’s upswept sill line gets toned down on the IF, spearing through the rear wheel well to match up with the rear bumper panel line as it widens into the taillight– well done. That sill accents an almost three-inch longer wheelbase on the IS, sitting on silver 10-spoke alloy wheels wearing P225/45R17-inch Bridgestone Potenza rubber. Other than a face that’s a bit forced, it’s a great-looking sedan.

Its inside is bit more sober than the exterior, and takes a page from Cadillac and others in adding stitched faux leather to enrich the look. Padded charcoal gray accented with silver, some real wood (glove box and door armrests) and warm pewter trim is the theme. There’s a strong horizontal theme bisected by a curved centerpiece with vents and analog clock. It also holds the inset upper stereo/blind spot monitor/backup camera/traffic/weather screen. The driver faces a chunky stitched leather-clad three-spoke steering wheel with stereo, Bluetooth and voice command buttons on the left, trip computer and lane departure monitor display buttons on the right. Aluminum shift paddles are behind it. Under that contrasting stitched binnacle is an 8,000-rpm tach and 160-mph speedometer framing a color trip computer/stereo/lane departure-warning screen, with gas and temperature gauges in the corners. 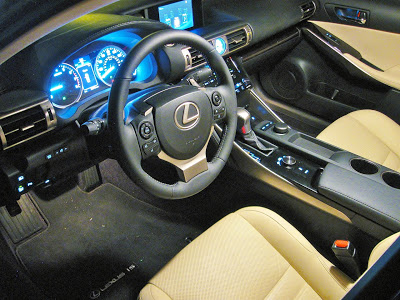 The dash center looks a bit old fashioned with its blocky shape, but puts every control at hand between the padded faux stitched leather console accents. Under the clock is a dual-zone climate control system with Ford MyTouch-like touch strips to adjust temperature – they work OK. Below that, machined black aluminum volume and tuning knobs for the great-sounding AM-FM-CD-SiriusXM audio system with a USB and MP3 audio input jack next to a 12-volt
power outlet under the slim center arm rest.

Because we didn’t have navigation, we didn’t get the trackball-like Remote Touch controller on the center console that lives in every ‘13 Lexus I tested. Instead, there was a simpler alloy knob that moves the cursor on the infotainment screen, and then you tap to access the item. There’s an “audio” and “main menu” button, plus a back button. It worked well, accessing audio, car economy, traffic and weather, plus a navigation system. But voice command was a bit clunky, it’s on-screen prompts not what I wanted. Familiar voice command orders didn’t work sometimes. That said, it was nice to have real-time traffic and weather information delivered when navigation isn’t part of the package. 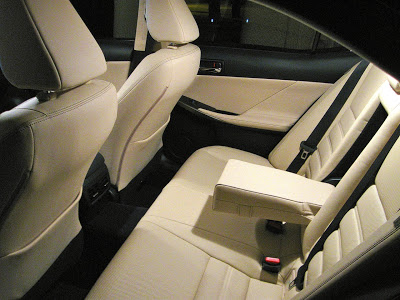 The newly designed driver’s seat was very comfortable, with a great hip-hugging amount of lateral support and three memory presets after you work its eight-way power adjustments and lumbar support. It and the steering wheel pull back to ease exit and entry. With almost three inches more wheelbase, my six-foot-tall frame fit the back seats OK, decent legroom aided by a thinner front seat design. The added wheelbase also made for a big, flat trunk aided by a lockable 60:40 split/folding rear seatback and a low liftover. For safety, 10 airbags standard, plus a sonar sensor system on the front and rear bumper and blind spot detector
warning icons that flash in the side mirrors. 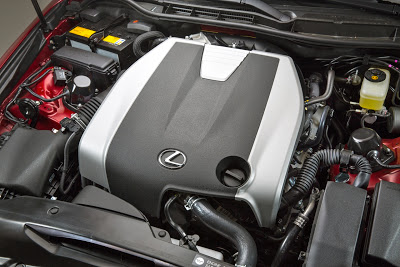 The Lexus IS comes in three flavors with rear or all-wheel-drive. The IS250 has a 204-horsepower, 2.5-liter V-6, while our IS350 had a 306-horsepower, 3.5-liter V-6, same as the IS-F Sport. Our four cam, 24-valve aluminum engine had the eight-speed automatic with manual shift/paddle shift, and was a willing partner in driving with a Drive Mode Select system which offers ECO, NORMAL and SPORT. No manual transmission is offered, and all-wheel-drive and lesser ISs get a six-speed automatic. Eco mode dumbed down throttle and engine input to eke out an average 20 mpg. The Sport mode tightens throttle response and held the transmission in lower gears for more rapid downshifts and power on demand quicker.
It added weight to the steering, although we noted no change in the suspension.
The result, when set in Sport, was a quick launch as the rear tires grabbed and we hit 60 mph in a quick 5.6 seconds with a nice engine growl and precise shifts. This mode had Lexus’ “G force Artificial Intelligence,” which selects the optimal gear and downshift pattern in response to G forces, keeping us in our selected gear through a corner. 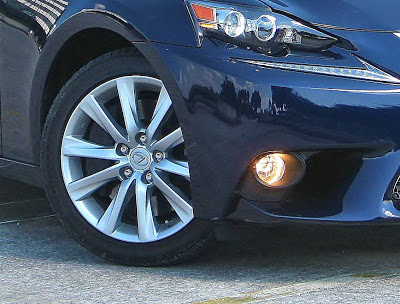 Lexus says the IS is a more rigid sports sedan due to laser screw welding and adhesive body bonding techniques, along with additional spot welding. We noticed how quiet the car was at speed, and how the revised double wishbone front/new multi-link rear suspension system (from the GS) gave it a firm yet quite compliant ride. Potholes and cobblestone streets were handled with a quick rebound nicely cushioned. Play hard in a turn and the IS handles neutrally, the rear tires playable with throttle until traction control slips in.

On our skidpad, a touch of understeer, but throttle lets the rear end play a bit. It wasn’t as fine-tuned as a BMW, showing a bit more luxury than its German competition. Borrowing the steering gear box from the GS gave us a precise road feel and a tight turning radius. The brake pedal had a decent feel, and the IS350 stopped straight and with minimal nosedive, offering good fade resistance after some repeated heavy stops. 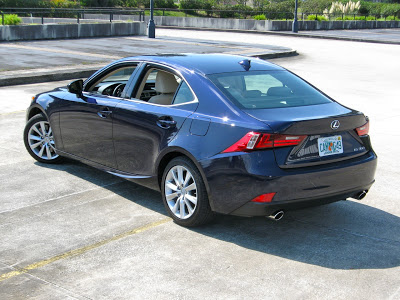 The ‘14 Lexus IS350 is a stunning styling update of the last-generation model with a very aggressive face few will forget. It’s a bit more luxurious than a BMW, and a bit softer in its ride and handling. But its comfort level, combined with its sure-footed approach to life in the highway, makes it well worth a drive.

For everything you need to know about the 2014 IS lineup, please visit http://www.lexus.com/models/IS/