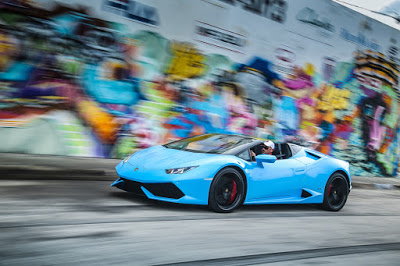 A McDonnell Douglas F/A-18E Super Hornet attack fighter being catapulted from the deck of the USS George Washington carrier, accelerates from zero to 165mph in roughly two seconds. That’s fast, insanely fast. But until the day Uncle Sam invites me to take the aptly-named joy stick of one of his Super Hornets, base price $65.3 mill, my new-found benchmark for insane acceleration is the sensational new V10-engined, 602-horsepower Lamborghini Hurácan LP610-4 Spyder. Man this car is quick. Quick as in standstill to 60 in a mere three seconds. Standstill to 100 in just over six. And this bull doesn’t quit charging until the speedo readout is flashing-up 201 mph! 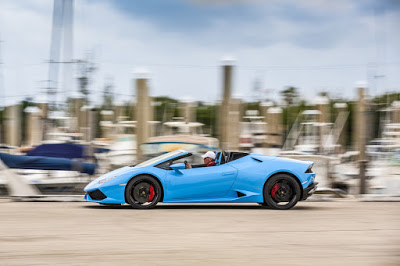 You need a whole Thesaurus of superlatives to describe the sensation of this all-wheel-drive, bat-out-of-hell distributing its 413 torques to all four corners and launching itself, Super Hornet-style, towards the horizon.

Yes, there is quicker machinery out there. The lighter Hurácan Coupe is a hair faster. But there’s nothing quite like a convertible for intensifying the sensation of outrageous velocity. A buck-twenty in this Hurácan Spyder is akin to being in a trailer in a twister. Then there’s the noise. And what a noise. Just driving around town, that quartet of artillery-grade tailpipes has more snap, crackle and pop than an explosion in a Chinese fireworks factory! 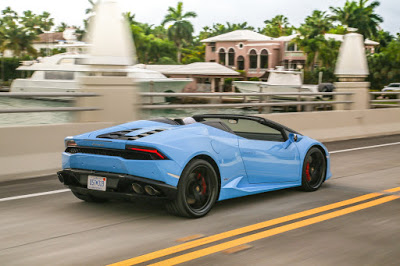 But for full aural histrionics, find a nice, long open stretch of asphalt – Cape Canaveral’s 15,00-foot Space Shuttle runway would do nicely, or even a Starbucks drive-thru for that matter – and just stand on the throttle. Behind your right ear, the naturally-aspirated 10-cylinder screams like a demented Steven Tyler in a Skittles ad as it ricochets off the 8,250-rpm limiter. It’s so musical it should have its own Broadway show! 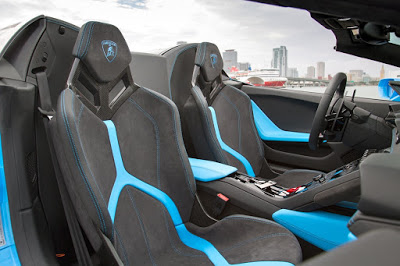 What we have here is the long-awaited successor to Lamborghini’s hugely-successful Gallardo Spyder supercar, the best-selling Lambo ever. At $267,545, the drop-top Hurácan it’s priced around $24,000 more than its coupe sibling. Yes, that’s a crazy price for what is essentially a full-size Hot Wheels toy. But if you’ve got it, flaunt it and the Hurácan Spyder flaunts like a Kardashian posing for a selfie!

It’s not beautiful in the way a new Aston Martin DB11 or Ferrari 458 Italia is beautiful. Not subtle like a McLaren 650S Spider or Mercedes AMG GT. It’s a crazed cacophony of wacky angles, scalpel-sharp edges, air-gulping intakes and a windshield that looks like an Aspen ski-jump. Not dissimilar, in fact, to a Super Hornet jet. 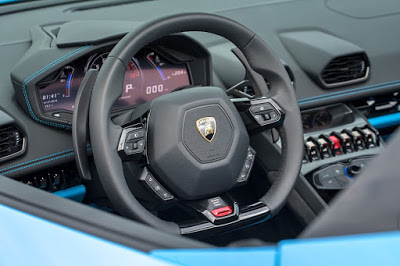 But nothing will spin heads faster than a Hurácan Spyder painted in our test car’s Sherwin Williams Robin’s Egg Blue. Park it just about anywhere and it draws a crowd like metal filings to a magnet. Want instant celebrity? We have your car.

Yet if you put aside all the flash, the noise, the exhibitionism, this decapitable Lambo is just the most glorious, most involving car to drive. Lamborghini calls the Spyder its “lifestyle” model, aimed at being just a little less hardcore, a little less hard-edged than the coupe. 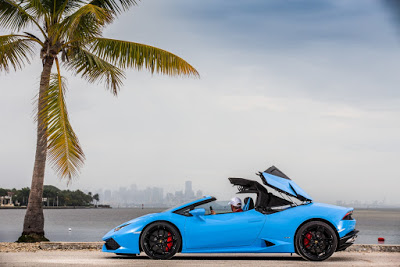 Dropping the top couldn’t be easier. Toggle a switch and the canvas roof unlatches and power-glides beneath a hard cover in a mere 17 seconds, and at speeds up to 31mph. And this is no flimsy, stretchy-Spandex affair; it’s triple layers include a sound-absorbing rubber middle section that makes the cabin nearly as hushed as the coupe’s. And with the top dropped, Lamborghini has gone all out to protect you from follicle ruffling. I love the little pop-out mesh Mickey Mouse “ears” behind the side windows to redirect airflow away from inside. 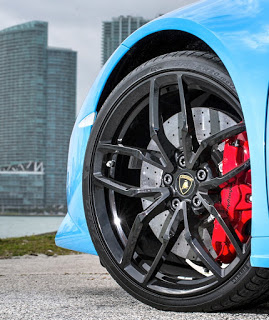 Yes, the suspension is stiff; drive over a quarter and you’ll know whether it’s George W or the outstretched eagle you’re running over. But the ride feels mere sporty rather than sadistic. Handling? The Hurácan essentially goes where you point it, at whatever speed. Only on a racetrack could you test the outer limits of its adhesion. On the road, with all-wheel-drive, huge 20-inch Pirelli P Zero rubberware, heavyish, but super-precise steering and an ultra-stiff carbon fiber chassis, this thing runs on rails.

For me, this magnificent beast pretty much defines what a true, exotic supercar should be. Brutally fast, insanely loud and as extrovert as a gay peacock. Great value too…when you compare it to a Hornet!

For more information about the latest Lambos, please visit http://www.lamborghini.com/en/home/