No vintage-racing event showcases and celebrates the ‘way it was’ better than the 2019 Historics at Weathertech Raceway Laguna Seca, sponsored by Rolex during Monterey Car Week. CGC’s Mike Matune was trackside to bring you highlights of this year’s RMMR. 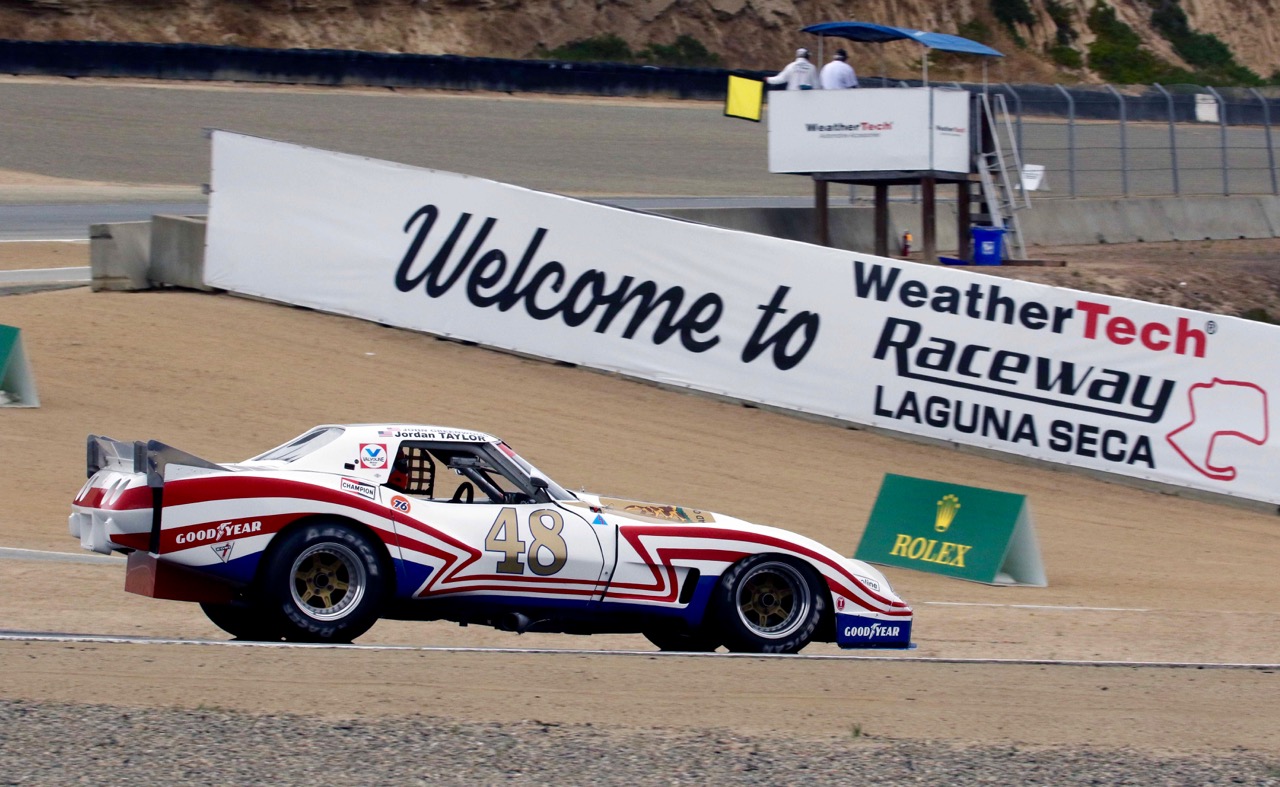 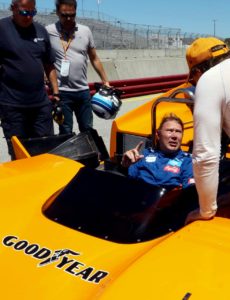 Each year since 1974 vintage racers have flocked to California’s Monterey Peninsula to make their mark during the Rolex Monterey Motorsports Reunion (RMMR). Weathertech Raceway Laguna Seca again played host in 2019. This year was a celebration of the 50th anniversary of IMSA; nearly a hundred cars and drivers showed up to mark the occasion. When you talk IMSA, your thoughts are drawn to some of the most outrageous cars to ever contest a road course. The shapes and liveries of these racers are etched into every race enthusiast’s memories. Perhaps there is no greater an example than a Greenwood Corvette in Spirit of America colors. Owned by Eric Roturierhere, it was driven by Jordan Taylor. Check out the dash-cam video shot at LAGUNA SECA: ROLEX MOTORSPORTS REUNION! @ https://www.youtube.com/watch?time_continue=362&v=PiW-JPqh23E

Everywhere you look at the RMMR, you are treated to another example of what makes this event so special. Two-time F1 drivers’ champion Mika Häkkinen dazzled  fans with an exhibition run in Zak Brown’s McLaren M8D/3. Here’s Mika, above,talking to Brown (white shirt) about his experiences. One of the first questions he asked was how long a race lasted during this car’s prime. When told something like two hours, you could tell by the expression on his face he had developed a new respect for Dan Gurney and Peter Gethin who drove it in period. 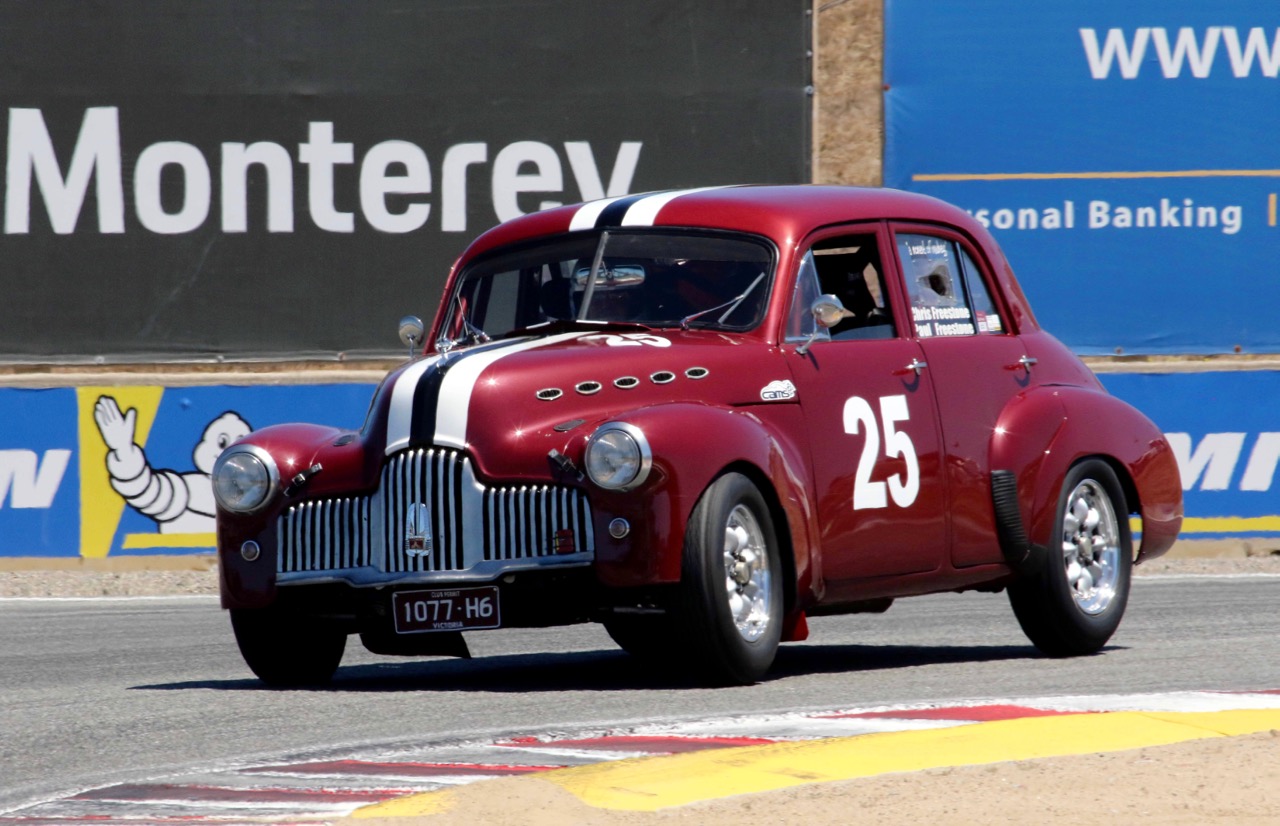 This one had me scratching my head until I remembered the photos of early touring cars racing in Australia. Turned out it was Chris & Paul Freestone’s ‘48 Holden, A GM product exclusive to Australia. Its journey to Monterey didn’t just begin Down-Under, but rather under a tree where it sat unloved rotting away. Purchased for the princely sum of $1.00, it was converted into a rally car for the Targa Tasmania before a further conversion to a circuit racer. Powered by a 215 cubic inch straight six, it sports Webers and dry sump lubrication. 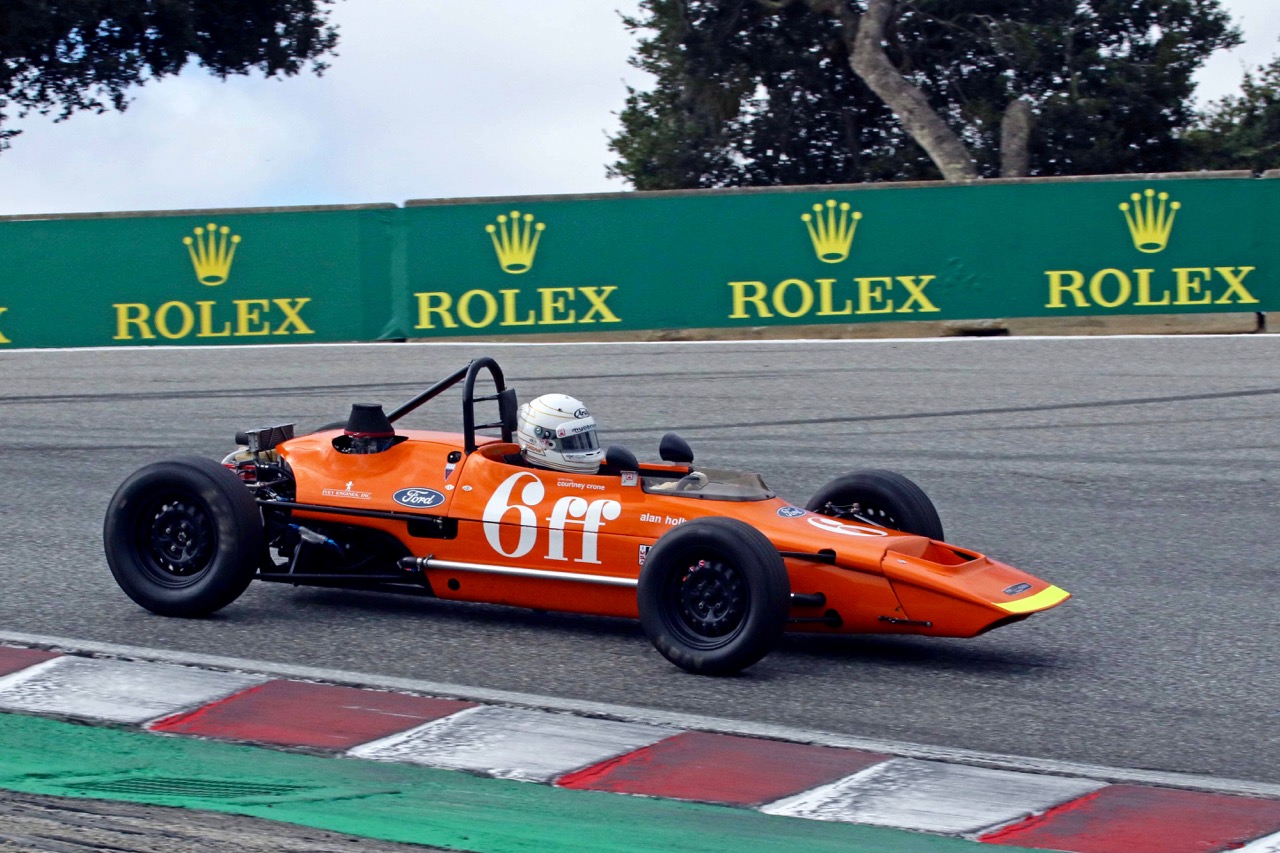 This is one photo with two captions. The first concerns the earliest days of IMSA. We sometimes lose sight of the fact that IMSA started out as an open-wheel racing organization. Its very first event was at Pocono in October 1969 and featured Formula Vees and Fords. In recognition, RMMR crowded the circuit with vintage Formula Fords. True to form there were battles up and down the field. The second caption regards the future of historic racing. In Paul Fanner’s ‘72 Eldon Mk 8, sits 18-year-old Courtney Crone, a veteran of SCCA Formula F ranks. Driving since age 4, she is what one hopes to see more of in the future vintage racing ranks. 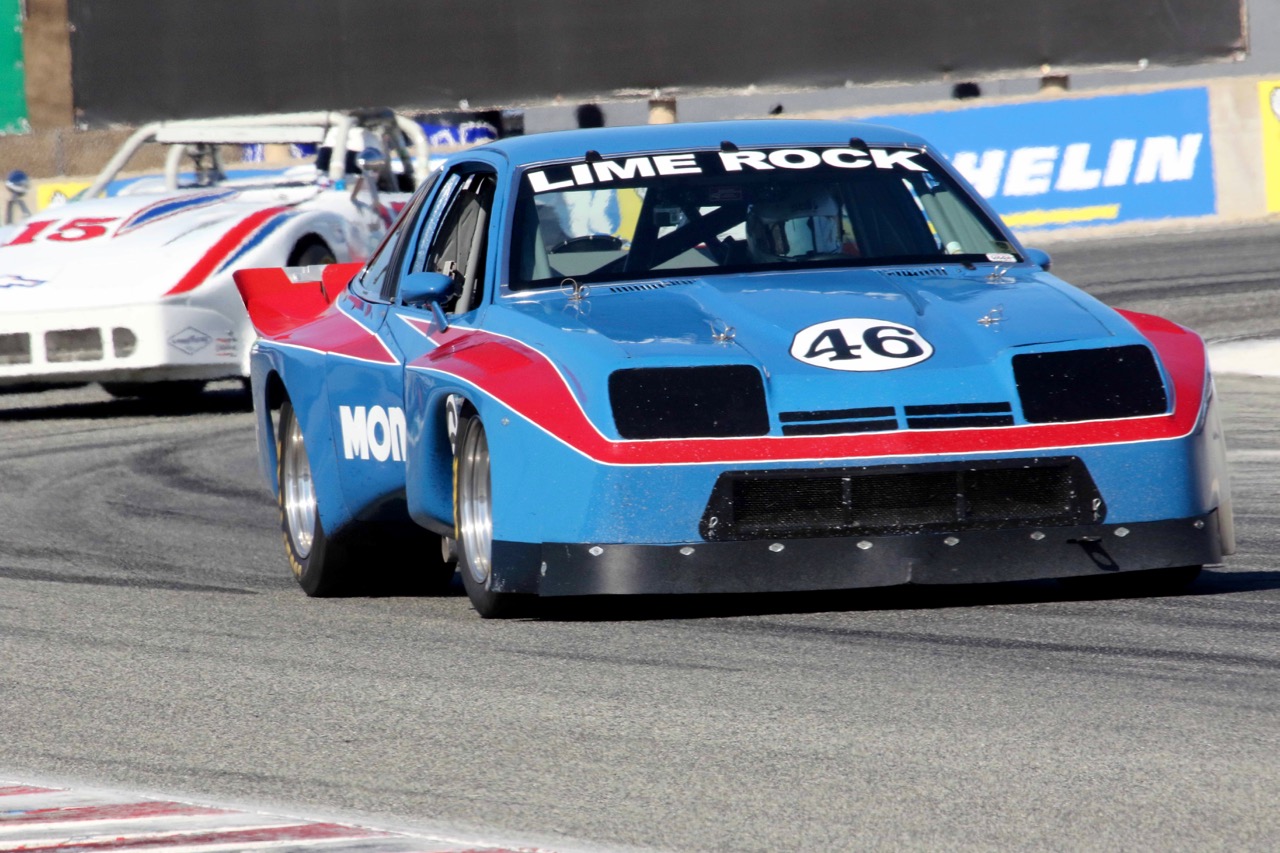 One of IMSA’s better ideas was the creation of the All-American GT (AAGT) class. It allowed American nameplates to compete with Porsches and BMWs at the time. Built on tube frames with fiberglass bodywork, they were powered by V8s in either carbureted or fuel injected form. Doug Stevens’ Chevy Monza was built by DeKon, originally owned by Harry Theodoracopulos and raced by Horst Kwech. The Lime Rock sticker at the top of the windshield was placed there, as Theodoracopulos owned Lime Rock at the time. For more on these cars, see Michael Keyser’s great article in the latest issue of Vintage Motorsport. 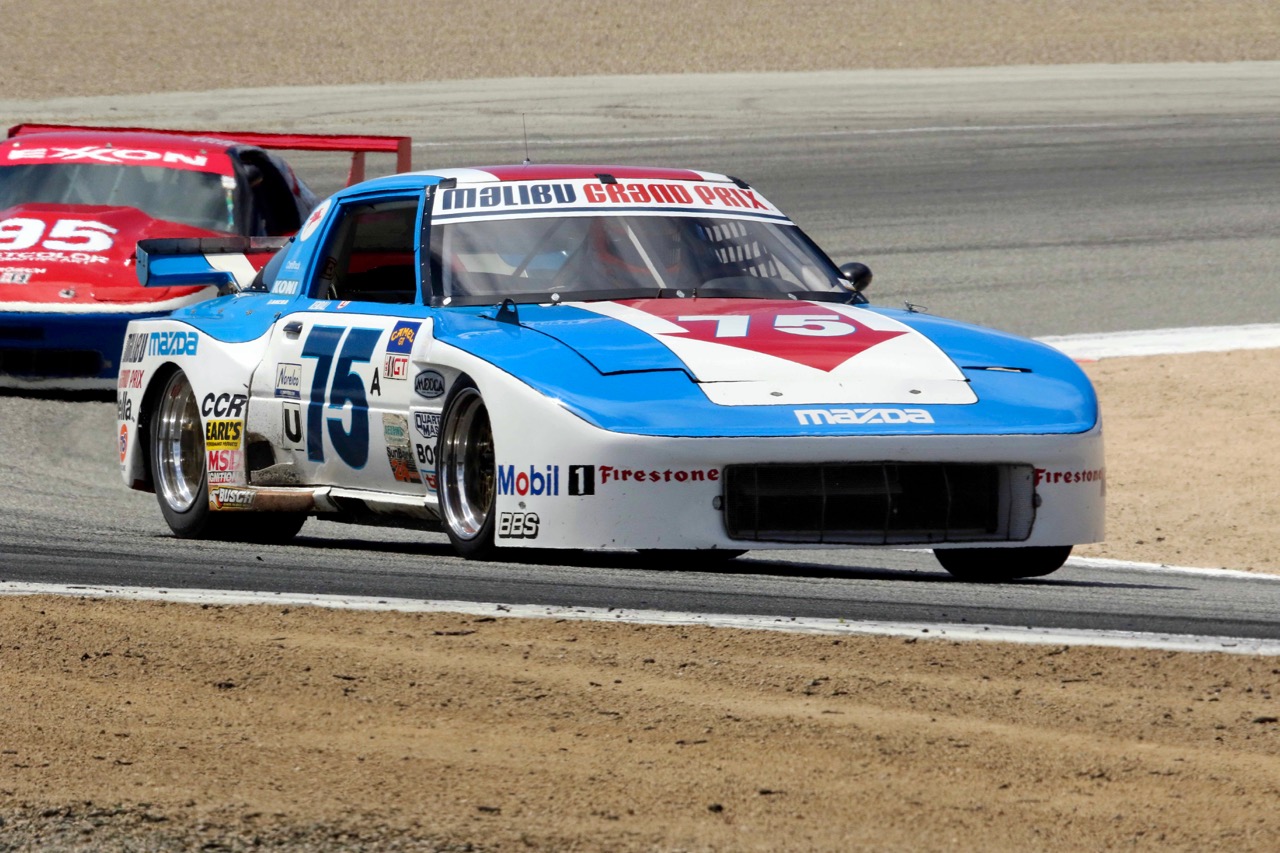 Last year we featured Tommy Kendall’s ‘82 Mazda RX7 as a show car at the Japanese Automotive Invitational on the grounds of Pebble Beach. This year it was back where it belongs, on the track at Laguna Seca in Kendall’s capable hands. It has to be one of the winningest RX7s around, capturing 21 races and five championships in the hands of three different racers. This is the car that helped launch Kendall’s career. 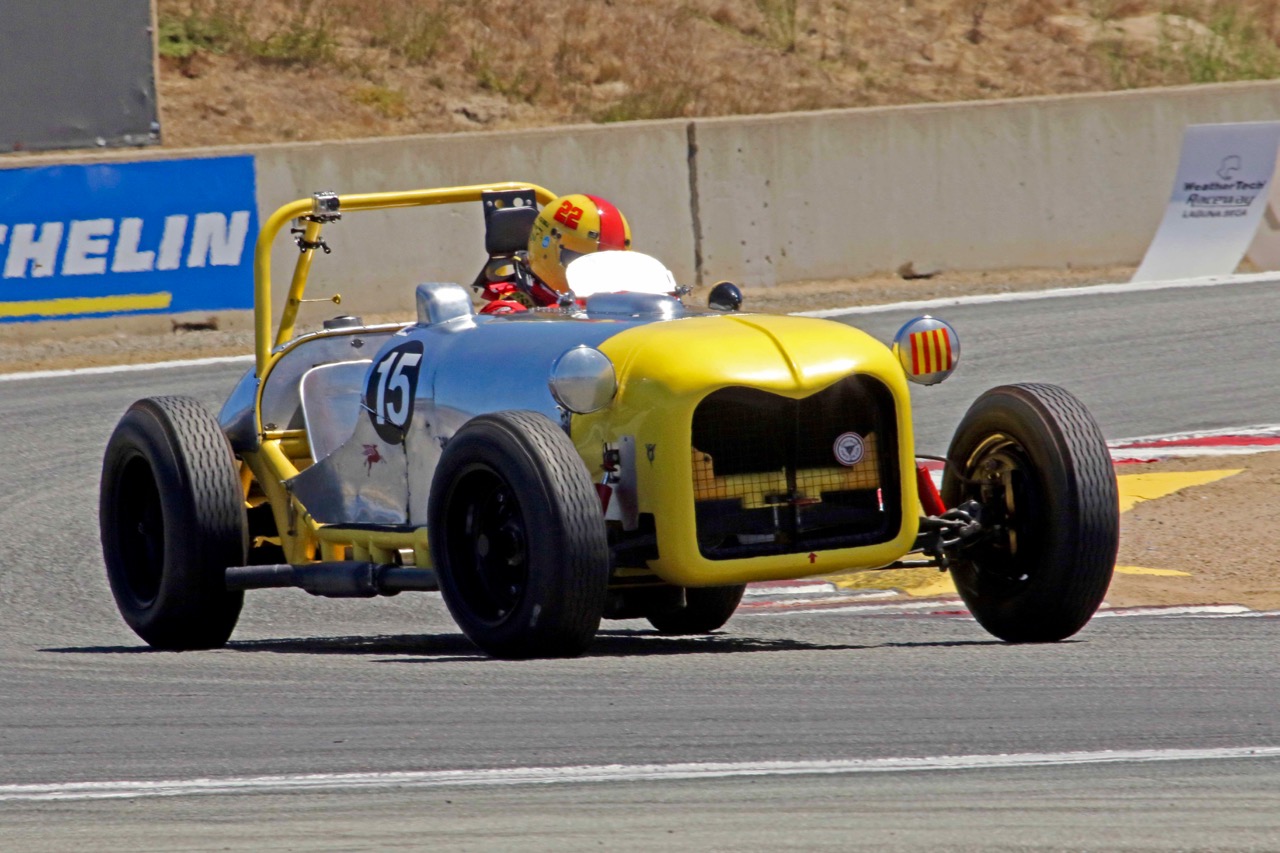 What’s a Reunion without a historically significant racecar? Here’s Marcus Bicknell’s ‘52  Manning Special. In the early days of sports car racing following WWII, there were those with the wherewithal to buy the latest and greatest European racer. But there were also those who thought they could build their own cars and do just as well. The Manning Special came from the fertile mind of Chuck Manning, a California aerospace engineer and hot rodder. Manning wrote about it in Road & Track and sold plans to duplicate his efforts for $2.00. The car went on to become successful in early sports car racing and clones sprang up across the country. 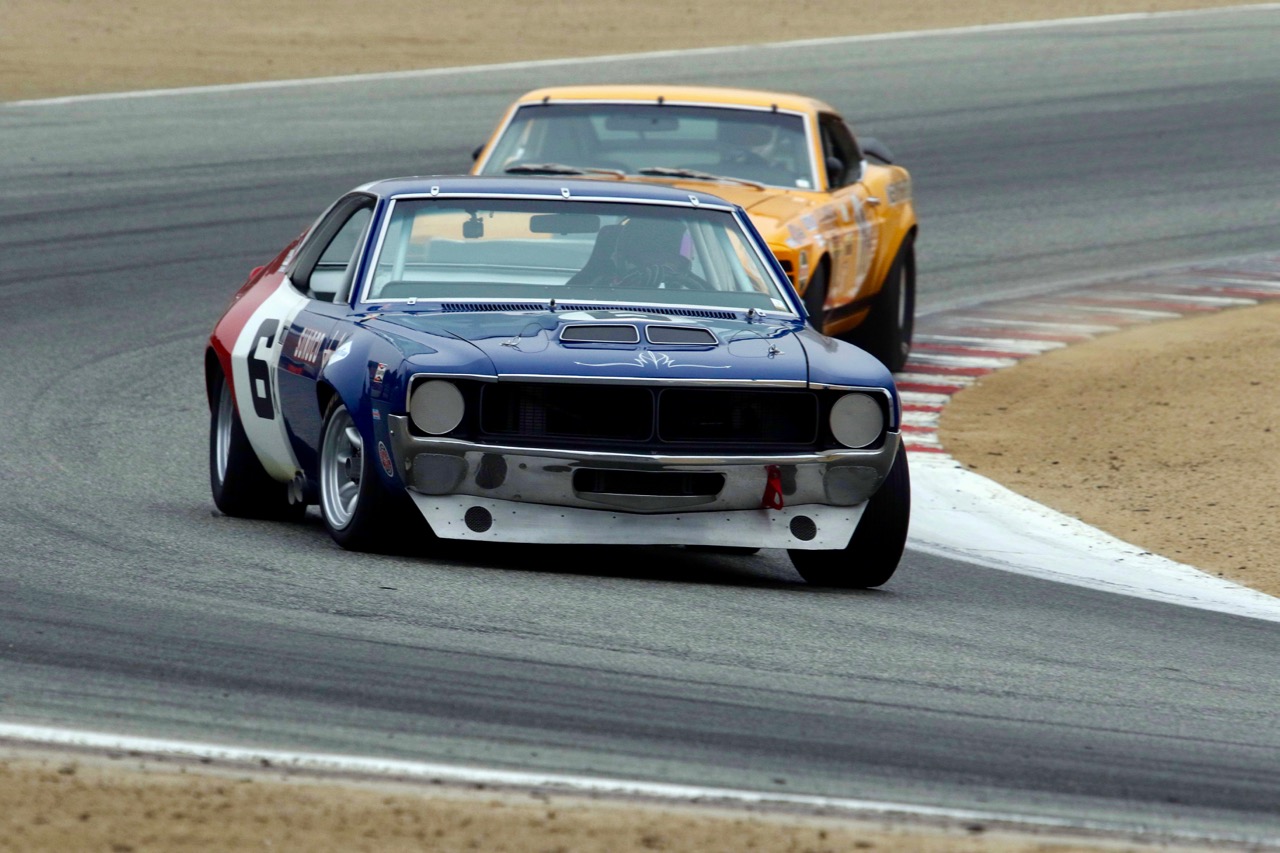 You blink your eyes and suddenly it’s 1970 all over again! The SCCA’s Trans Am is in full swing with countless factory dollars flowing to teams with cars driven by the best drivers. Penske and Donahue had left Chevrolet to take over AMC racing. It is a hard-fought year with the Bud Moore Mustangs coming out on top. Today they sound just as means, are just as fast and driven just as hard as they were then. Here’s Bruce Canepa in a ‘70 Javelin leading  Jim Hague’s Mustang. 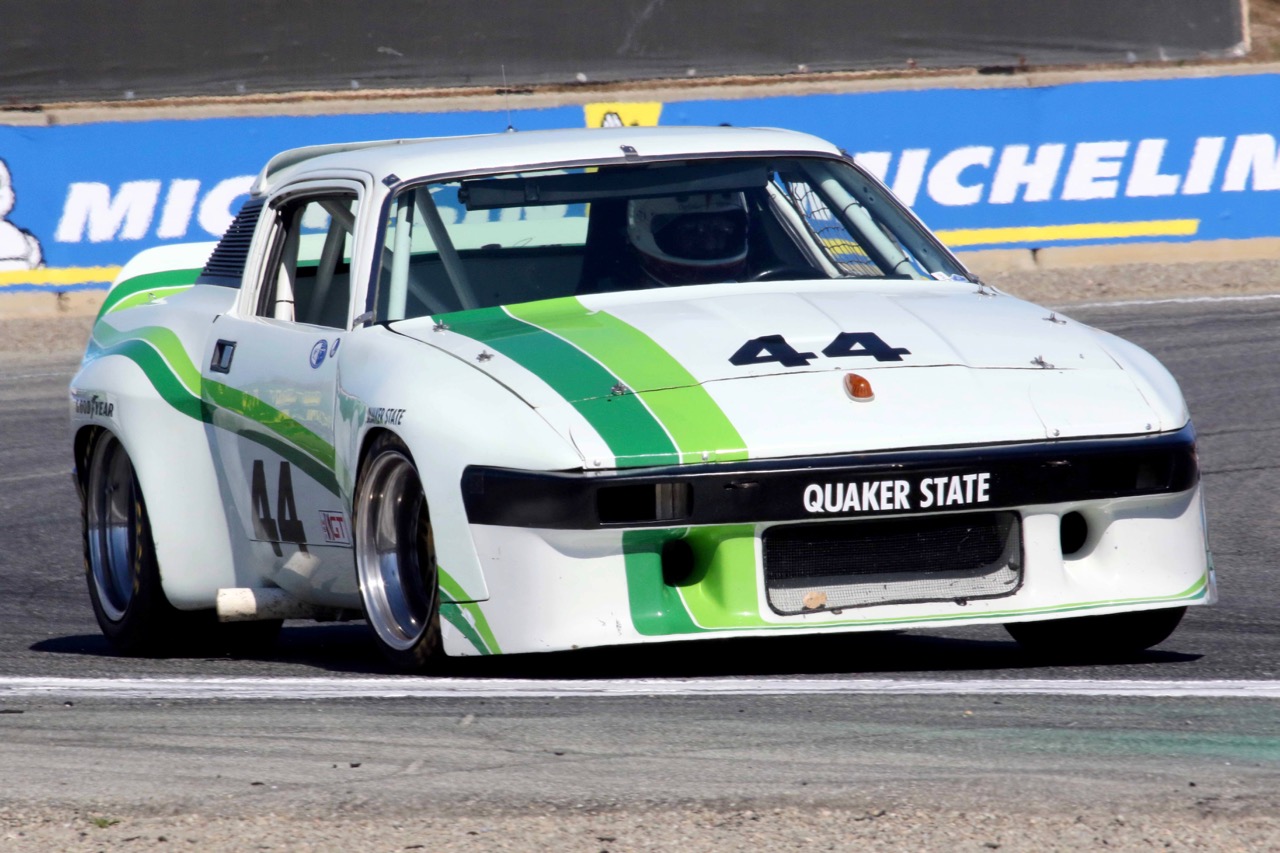 Amelia Island Concours d’Elegance Founder & Chairman Bill Warner brought his ex-Group 44 ‘80 Triumph TR8. A full-on racecar, it sports wildly flared fenders, big spoilers front & rear and a built-to-the-max 215-inch aluminum V8. The engine was originally developed and built by GM in the early-1960s for use in Buick-Oldsmobile-Pontiac models. Among the car’s accomplishments in period was a GTO class win at the 1980 season finale held at Daytona. Warner did an admirable job holding his own in Group 5A for 1973-1981 FIA/IMSA/GT/GTX/GTU/AAGT cars, which included some very hairy machinery! 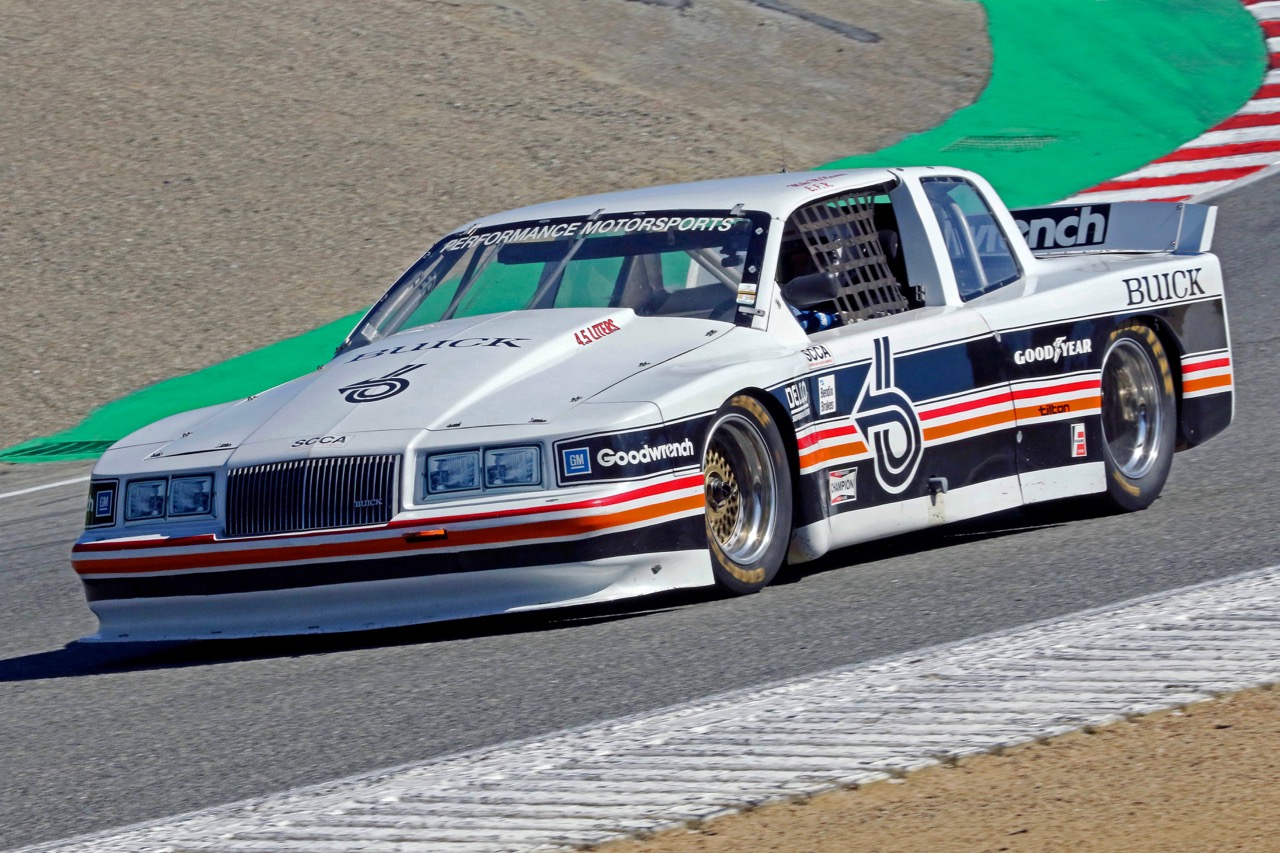 Now watch how skillfully we tie Mike McNamee’s ‘85 Buick Somerset to Bill Warner’s TR8. When GM decided they didn’t want to produce the B-O-P aluminum V8 anymore, they lopped two cylinders off and made an iron V6. Eventually both engines fell from favor and the V8 was sold to Rover in the UK and the V6 to Jeep. Enter the Fuel Crisis of the 1970s and GM wanted their engines back. Rover said no thank you, but Jeep sold back the V6. It would go on to power a variety of GM cars and to be extensively raced. Buick V6s showed up everywhere, from turbocharged versions at Indy to road racing versions in cars like this Somerset. 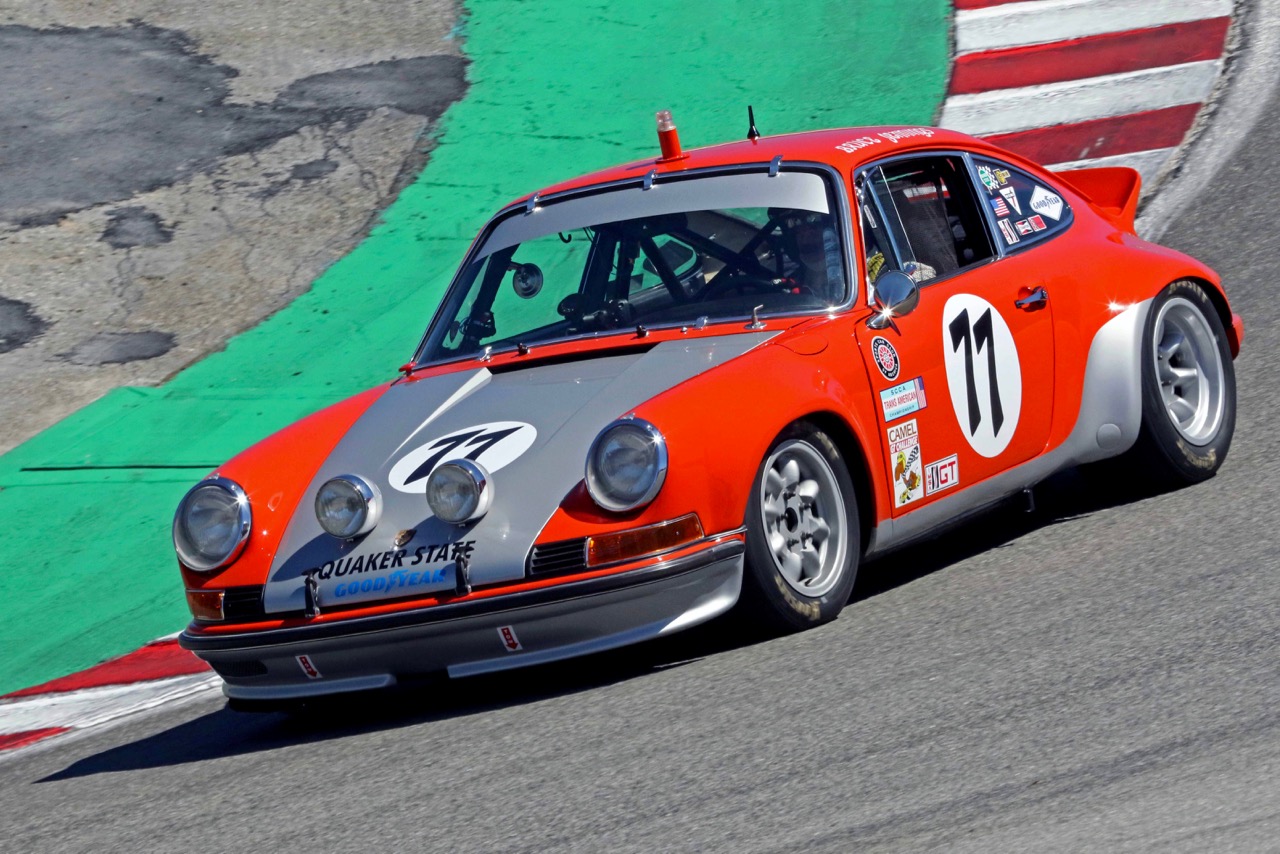 We have seen this vintage Porsche compete in events across the country, including multiple times at Monterey. Originally owned by famed Porsche privateer, Bruce Jennings, it’s purported to have started life as a reserve factory Monte Carlo rally car. Once stateside it grew flares and spoilers along with gaining a bigger engine. In period, it saw action in endurance races at Sebring and Daytona as well as being extensively campaigned in SCCA and IMSA. It has to be one of the more active Porsche 911 racers around. Today it’s in the capable hands of Randall Smalley. 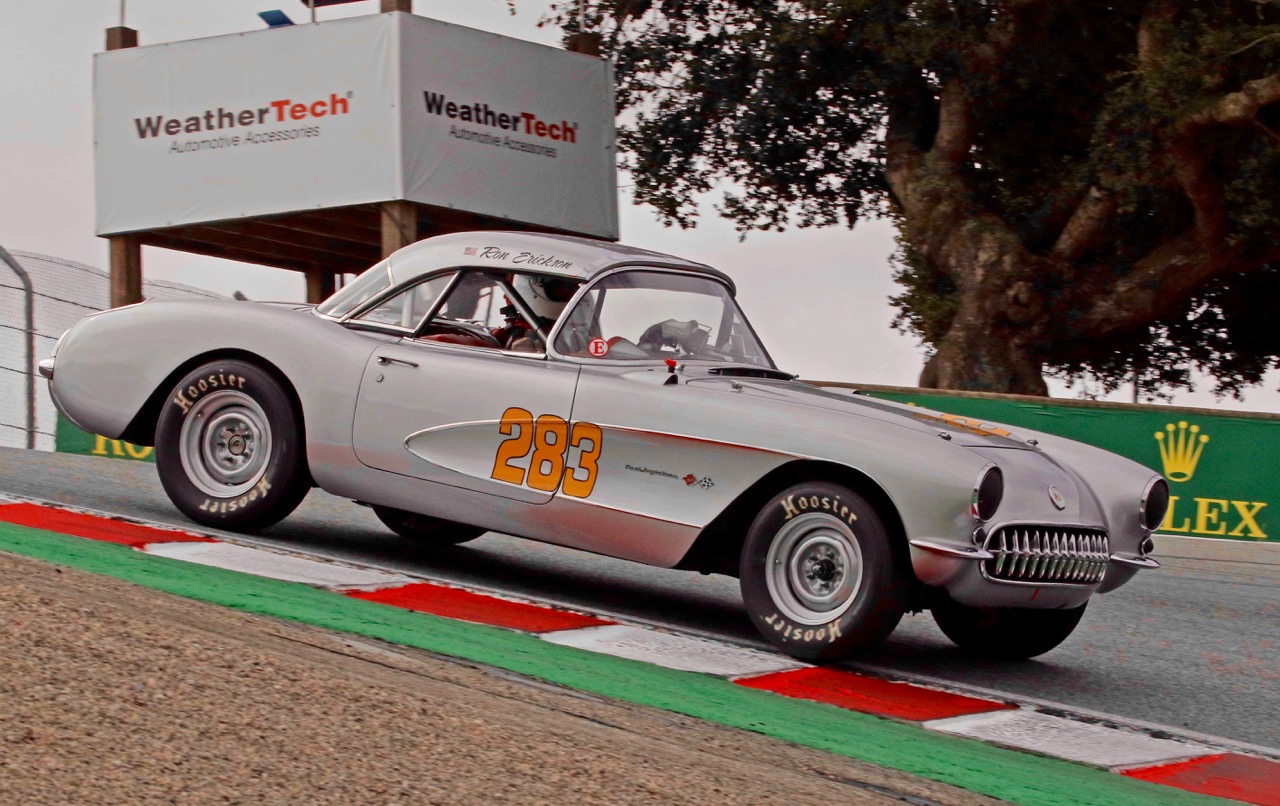 Ron Erikson begins his descent through Laguna Seca’s legendary “Corkscrew” in his ‘57 Chevrolet Fuelie Corvette. This shot gives you some idea of how steep that descent is. There are a number of stories about how the Corkscrew came to be, but my favorite is that the bulldozer operator who was cutting the track through Fort Ord came to the top of the hill and asked where he should go next. He was told “Down there” and the Corkscrew came to be. I don’t know if the story is true or who exactly created the Corkscrew, but whoever it was deserves our thanks! Erikson’s car has been on one track or another since 1965, including almost fifteen appearances at LAGUNA SECA: ROLEX MOTORSPORTS REUNION!

Our thanks to Brandy Falconer for her help with credentials and in ensuring we had all the information we needed. Additionally, thanks to Sara, Persephone Cueva, “Shuttle” Ray, and a whole host of volunteers who made our time at LAGUNA SECA: ROLEX MOTORSPORTS REUNION! so enjoyable.