Skip to content
‘When it comes to historic racing, it doesn’t get much better than the premier Rolex event in Monterey,’ blogs Mike Matune. 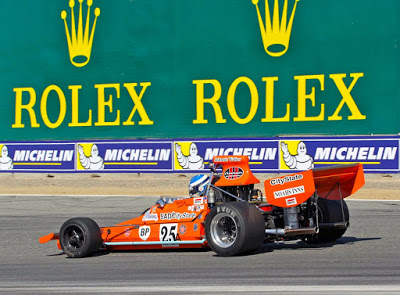 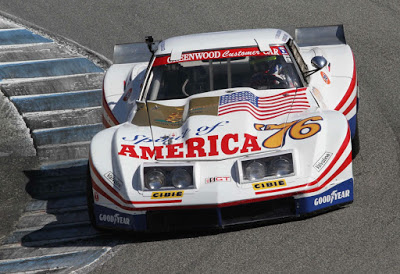 As August arrives, summer begins to wind down, but not before the Rolex Monterey Motorsports Reunion (RMMR) treats us to its annual celebration of the racing automobile. Among their celebrated groups this year was Formula 5000. You get a sense of the international character of RMMR when you consider Philip Lewis travelled from Denmark to compete in his ‘72 Matich A50. The car came from the fertile brain of Frank Matich who designed and built the car that achieved noted success in its native Australia and in the U.S.

Didier André brought his ‘77 Greenwood Corvette. A sister car to the one that raced Le Mans and one of five built, the car appeared in only one IMSA race in its day, making it a well preserved time capsule. André made outstanding use of all of the Corvette’s horsepower, slick aerodynamics and road-holding ability to take Second in the Group 4A feature race. 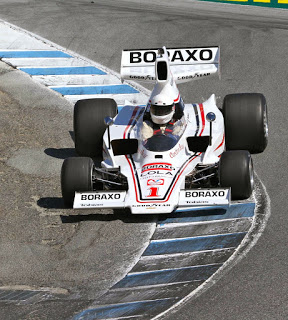 Formula A or 5000 was a late-1960s creation combining stock block pushrod V8s for the most part with Formula car chassis from a variety of constructors. Until its demise in the mid-1970s it played host to big name international stars competing around the world. 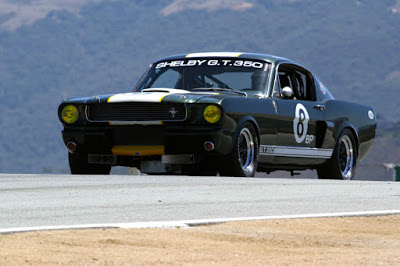 In addition, RMMR acknowledged the 50th anniversary of Carroll Shelby’s GT350 Mustang. Built from the bones of Ford’s “Ponycar”, the GT350 featured just enough modifications to make it a sports car in the eyes of the SCCA. Today they are both highly prized collector cars as well as formidable vintage racecars. Their appeal is nearly universal, Terry Lawlor bringing his example all the way from Australia where it has resided since 2004. Originally a street car, it was converted to a racecar early in its life and ran at tracks across the U.S. It just came off an extensive restoration in preparation for its appearance at Monterey. 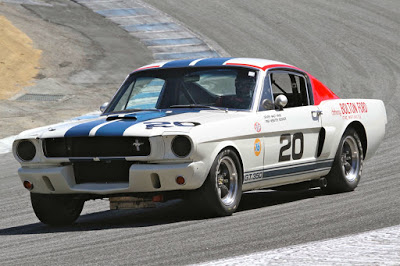 Official results showed 35 GT350s competing in Saturday’s feature race with even more present at the track. Here Ross Myers of 3 Dog Garage fame is shown at the bottom of the “Corkscrew” on his way to another quick lap. Myers’ car is one of about three dozen racing GT350Rs. These featured modifications further removing it from its Mustang roots and making it into a no holds barred racecar. To make it even more special, it is the actual car with which Walt Hane took the 1966 SCCA BP Championship. By the way, a tour of Myers’ 3 Dog Garage in Boyertown, PA is a rare treat and certainly worth adding to the Car Guy things to do list. 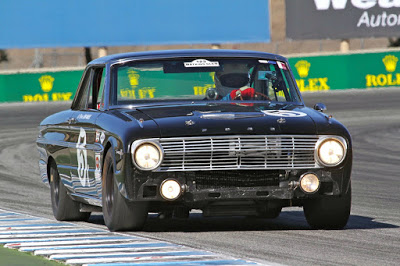 Now a little history lesson: When the Mustang and GT350 came along, they pushed Ford’s Falcon from the fore as a competitive weapon in Ford’s arsenal. In the early years of Ford’s “Total Performance” movement, Falcons competed the world over in races from ovals to road courses to drags as well as on the international rally circuit. Before they slipped from view, they would contribute their underpinnings to their successor, the Mustang. Michael Eisenberg’s ‘63 Ford Falcon Sprint is a good example of this, having competed in a couple of Trans-Am races, a rally in Mexico and on the SCCA trail before being squirreled away for an extended hiatus. 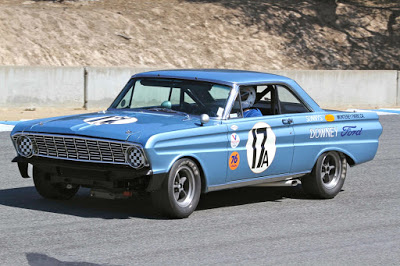 Mike Eddy’s Falcon started life as a 1963 model in SCCA sedan racing and was re-bodied to take advantage of a weight break for 1964 Falcons. It gained some fame as a “ringer” in the 1966 Trans-Am race at Riverside where it was entered expressly to keep points from the Mustangs’ competitors. Then its travels took it to Europe before returning to the U.S. to live out its active retirement as a vintage racer. 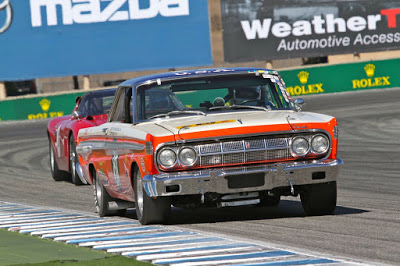 Not to be outdone, Mercury Division tried their hand at motorsports with the Falcon’s cousin, the Mercury Comet. Bill Stroppe would convert Comets into rally cars and test their mettle in one of the meanest events of all, the East African Safari rally. While results weren’t what they had probably originally conceived, two did finish. Following its return the U.S., the car saw action as an SCCA sedan racer. Today Greg Umphenour is the car’s custodian. 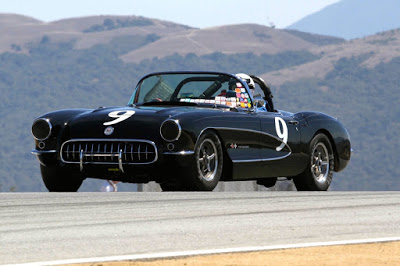 While it was a Shelby year to be sure, the Bowtie contingent was amply represented. Here we have Bob Paterson cresting the Rahal Straight on his way into the entry to the “Corkscrew” in his ‘57 Chevrolet Corvette. The car boasts an extensive race history, both in period and lately in the vintage ranks. It appeared back in the day at such legendary venues as Paramount Ranch and Pomona. By 1957 Zora Duntov and his merry band at Chevrolet had the Corvette moving towards competition success with options like mechanical fuel injection and four-speed. 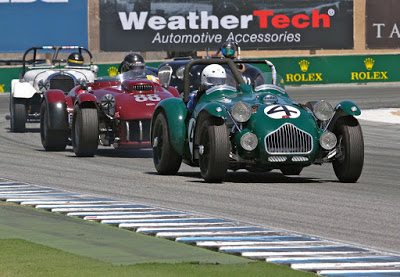 Stuffing an American V8 into a sports car chassis has always been a popular pastime. Here are two examples from the early post-WW ll period in racing history. Steve Schuler’s Allard (4) is the actual car that finished third at Le Mans in 1950 before finding its way stateside to compete at such places as Watkins Glen, Sebring and Torrey Pines. Close behind is Tom Claridge’s Kurtis 500S (88). Frank Kurtis used technology from his Indy cars coupled with Chrysler Hemi power to good avail. The car’s first owner was actor Keenan Wynn, who actively campaigned the car with success around the West and Southwest U.S. 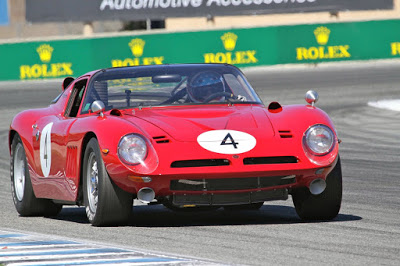 Shoehorning an American V8 into a sports car chassis idea didn’t end there as can be witnessed by Chip Fudge’s ‘68 Bizzarrini Strada GT. Under the sleek Italian lines lies a small-block Chevy sporting a brace of side-draft Webers. The engine sits back almost under the windshield making it something of a front, mid-engine design. Four wheel discs and fully independent suspension complete the package. Unfortunately the car’s lack of development and finances netted little actual racing success, an oft repeated story among specialty car builders. 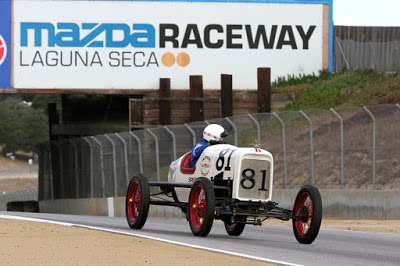 Bruce Hudkins steals a glance over his shoulder as he passes under the vehicle bridge on his way downhill towards Turn 6. His ‘22 Ford Model T Speedster was rebuilt from a wrecked racecar and has been a vintage competitor for about 25 years. The livery pays tribute to the Ford dealership that Hudkins’ family owned in Kansas in the early part of the 20th century. RMMR covers a broad spectrum of racers from the Pre-1940 to 90s FIA and IMSA competitors. 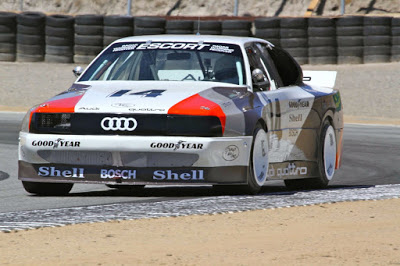 Do you remember Audi’s venture into Trans-Am racing in the late-1980s with its 200 Quattro? Conventional wisdom said you needed a Ponycar with big V8 horsepower and rear wheel drive, but here came Audi with a sedan sporting four wheel drive and a turbocharged 2.1 liter five cylinder engine. The world quickly learned that putting 500+ horsepower to the ground through twice the wheels made sense, especially when the weather was less than optimal. Steve Ziotkin reintroduced us to that marvelous turbo-chirp sound. 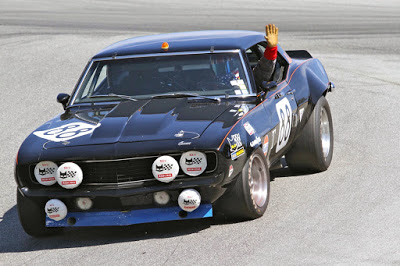 We’re going to let Greg Johnson and his ‘69 Chevrolet Camaro say goodbye from the 2015 Rolex Monterey Motorsports Reunion for us. His black Camaro looked sinister. The multiple front driving lights giving a clue to the cars history as an endurance racer at venues such as Sebring and Daytona. At the top of the windshield, mounted on the roof is an orange light designed to identify the car to its pit crew during the nighttime hours of an endurance event.