Skip to content
Racer Stephen Cox blogs about trucks before they became collectibles.

It’s no secret that vintage pickup trucks are the latest rage in collectible vehicles. They are inexpensive to restore, utterly reliable, born with a lengthy shelf life and they are enormously popular right now. If a collectible truck is on your wish list, here’s what you should know about two mainstay pickups from the 1970s.

When I began racing dirt tracks in the late 1980s, my father’s ¾ ton, red-and-white International 200 pickup with a Comanche 345 V8 served as our hauler. Frankly, it was better at its job than our racecar. The old International was the perfect hauler and well within its element dragging an extra 3,000 pounds all over the Midwest.

Its Comanche 345 engine produced less than 200 horsepower but made up for it with nearly 300 pound-feet of torque. The four-speed transmission with a huge, floor-mounted shifter was wonderful and allowed the driver to keep the engine in its best rev range, from about 2,500-3,500 rpm’s.

We had no trouble gaining speed while driving up moderate hills at 60 mph even when towing an open trailer, a racecar and a full load of pit gear stacked high in the 8-foot “Bonus Load” bed. When it wasn’t hauling racecars, it served faithfully as a farm truck, hunting truck and a second family vehicle. It was bulletproof. International’s 345 engines were known to frequently run 200,000 miles between rebuilds. There just wasn’t much the old International couldn’t do.

But you never forgot that this was, after all, a truck. The International got lousy fuel mileage, had a stiff, truck-like ride and offered only modest interior creature comforts. The bench seat consisted of vinyl stretched tightly over foam rubber and hard springs. The interior door panels were sheet metal. We had AM radio only. The heater functioned (technically) so long as you didn’t really need to stay warm. Nevertheless, as trucks go, the ‘74 International was a workhorse of the first order and left no job undone. 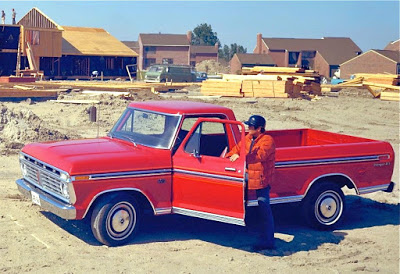 With the introduction of the F150 pickup truck in 1975, Ford produced a genuine American success story. This heavier and tougher version of the F100 was still built on Ford’s original 1965 chassis and came with upgraded engine options.

The ‘75 F150 that I drove daily for two years had a mostly sufficient small-block V8 that sent power through a 3-speed automatic transmission. There was no question that it was a gentler, milder truck to drive than the battle-ready International. Power steering and brakes softened the driving experience. The three-segment instrument panel was easy to read, with a 100-mph speedometer flanked by oil and fuel gauges on the left and temperature and alternator readings on the right.

The F150’s ride quality was sublime compared to the International. I drove the truck heavily during the bitter Indiana winters of the 1980s and it performed admirably. The F150’s 6,000-pound curb weight planted the rear tires firmly in the snow, especially when boosted by half a dozen 50-pound bags of fertilizer and a row of cement blocks in the bed for weight.

Over time, I grew to love our Ford F150. It was masculine and reliable. The two-tone paint and full-length chrome side trim made for an attractive vehicle that was still capable of 90% of the jobs that the International could perform.

It’s hard to make a bad choice here. It’s true that the International Bonus Bed pickup has that extra degree of panache and rarity, but its spartan interior and the inherent difficulty in locating International parts from the 1970s may make even a hardcore truck fan think twice.

For collectors, the Ford F150 is the easy vintage truck choice. An F150 from the mid-1970s will most likely have a 351, 360 or 390 engine, all of which are still supplied with parts through the aftermarket. Many of the interior gauges, dash components and electronics are interchangeable. C4 and C6 light duty truck transmissions are still plentiful.

The F150 is a joy to drive, easy to restore and offers just enough comfort to take on a cruise night. It has a nearly infinite fan base to promote resale value. I’m not sure which I would choose if I were still hauling a racecar to Paragon Speedway every weekend, but as a vintage collectible truck the Ford is hard to beat.