JD Classics took two victories at Spa Francorchamps in Belgium this weekend, including overall victory with a GT40 in the 25th anniversary of the Spa Six Hours race. 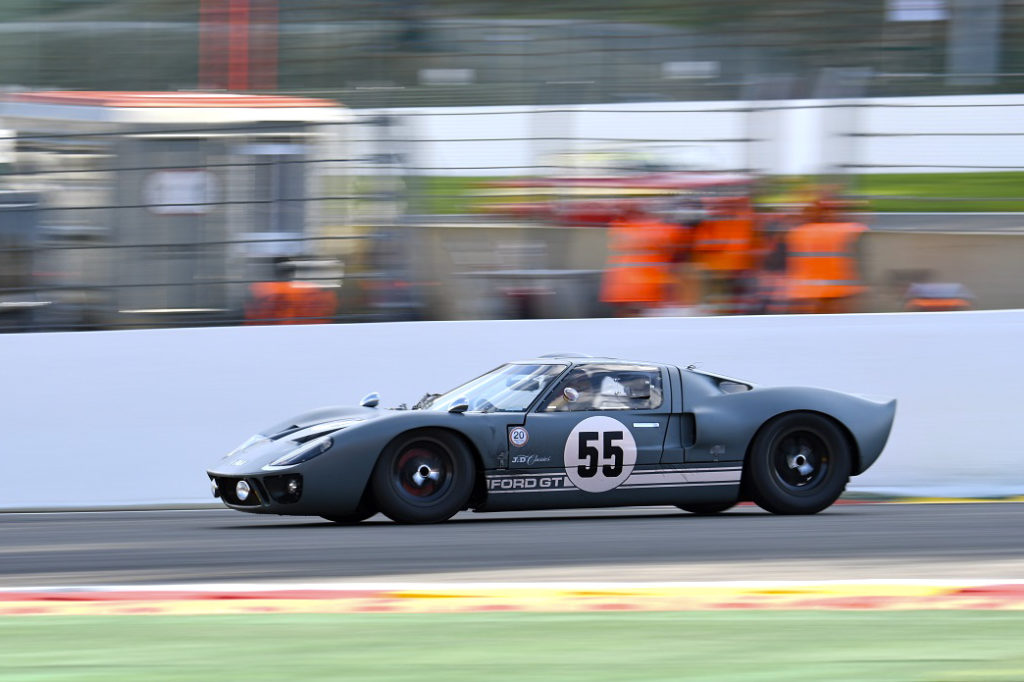 Celebrating the 25-year anniversary of the Spa Six Hours Endurance, over 110 cars lined up on the grid on Saturday afternoon in a bid to claim the coveted title. With the race now shortened to just over five hours due to an overrun in schedule, the lights turned green and the field roared up into the iconic Eau Rouge corner as the pole sitting GT40 of Stippler/Nolte/Funke led the field away. A slow start for the JD Classics GT40 saw Chris Ward slip into third place, however by the end of the first lap the place had been reclaimed and was now running in 2nd. A flying start from the pole sitter and by Lap 3 the front running car of Georg Nolte began to pull away from the field with a 4.3 second lead. Over the coming laps, Chris Ward responded to the front-runner’s charge and began to increase the pace. 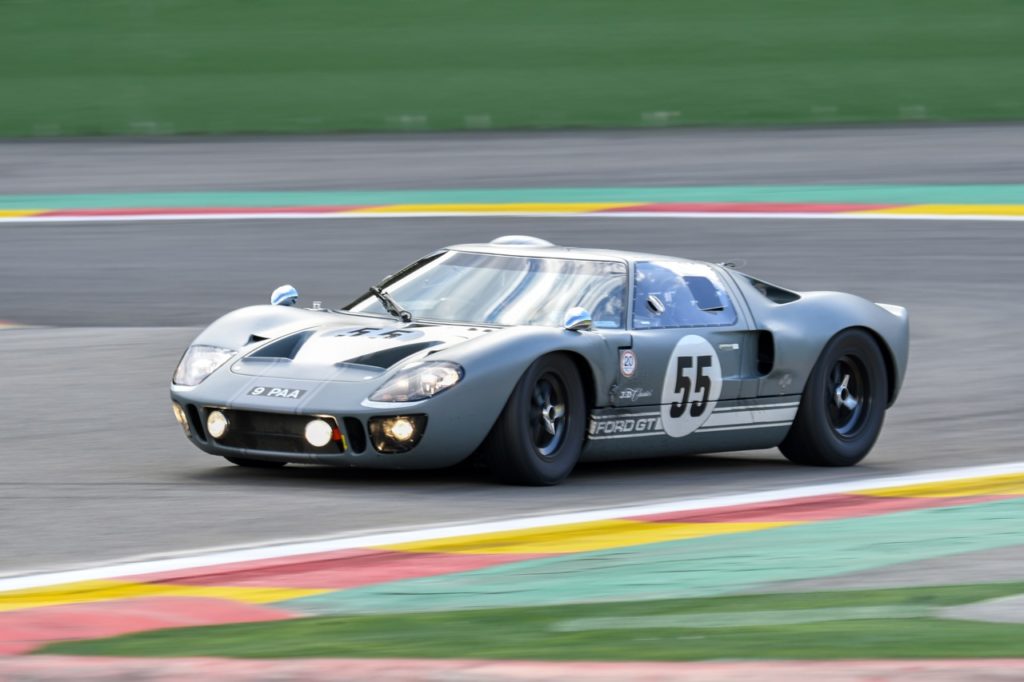 On Lap 12, the JD Classics GT40 edged into the lead and began to pull away from the pack, however on Lap 22 and with an 8-second lead, the safety car was deployed grouping the field back together and losing Ward his advantage.  With five laps behind the safety car as the stranded Elva GT160 was brought back to the pits, the race resumed with the GT40 of Martin Stretton and Tony Wood now in 2nd place, the GT40 of Nolte having pitted during the safety car.

Lap 36 and it was time for the first driver changeover for the JD Classics team. With Andrew Smith behind the wheel, the car needed to be fuelled; a task which in the true spirit of the period race has to be undertaken by the driver themselves. Once fueled, Andrew Smith re-joined the race in 9th place and managed to gain another couple of places.

With two hours to go, the JD Classics GT40 was now running in 2nd place and continuing to pull away from the third placed Wright/Gans/Woulfe GT40 and now in pursuit of the dominant Nolte. With a large influx of cars pitting for their final driver changes and refueling, the team decided to leave Andrew out for a few extra laps to avoid delays at the now busy fuel pumps. On Lap 73, the leading GT40 came in for its final stop giving Andrew Smith his opportunity to bridge the time gap and close in on the lap long lead that Nolte had sustained. Making good his escape, by the time Nolte had re-joined the race, JD Classics were now in the lead but with another stop still to make. 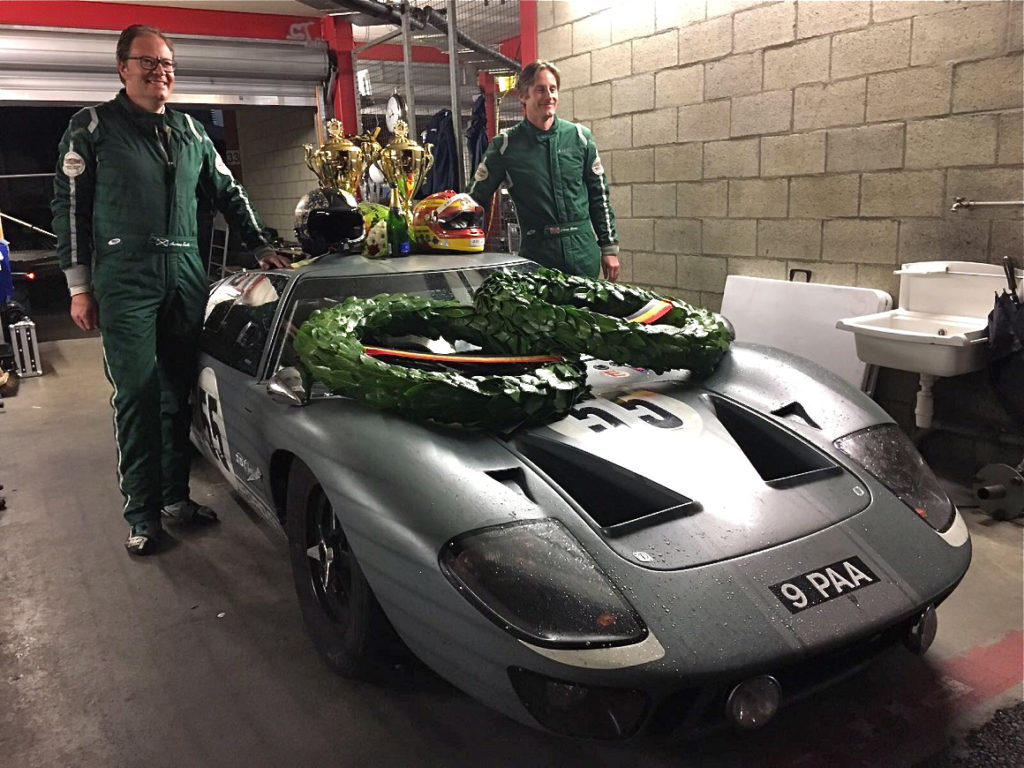 A lap later and the safety car was on track once again; an opportunity the team took advantage of calling Andrew Smith in for the car’s final stop. A speedy changeover and Chris Ward was back in the driver’s seat as he drove into the fuelling station. An impressive sub 4-minute refueling, the GT40 re-joined the field maintaining the lead having pitted at the optimum time. As the race entered its final 30 minutes, Chris Ward charged the JD Classics car around the challenging Francorchamps circuit with the 2nd placed Nolte on the chase but one lap down. As the minutes ticked ever closer to the checkered flag, Chris Ward found himself caught up in traffic making for precarious on track conditions with the competition at its fiercest. Despite this, the JD Classics GT40 powered its way to the team’s first Spa Six Hours victory, a lap ahead of the second placed car of Georg Nolte, Franck Stippler and Michael Funke. It signaled the end of a successful weekend’s racing for JD Classics with two dominant wins at this year’s Spa Six Hours.

For more information about JD Classics, its inventory and its racing efforts, please visit http://www.jdclassics.com/