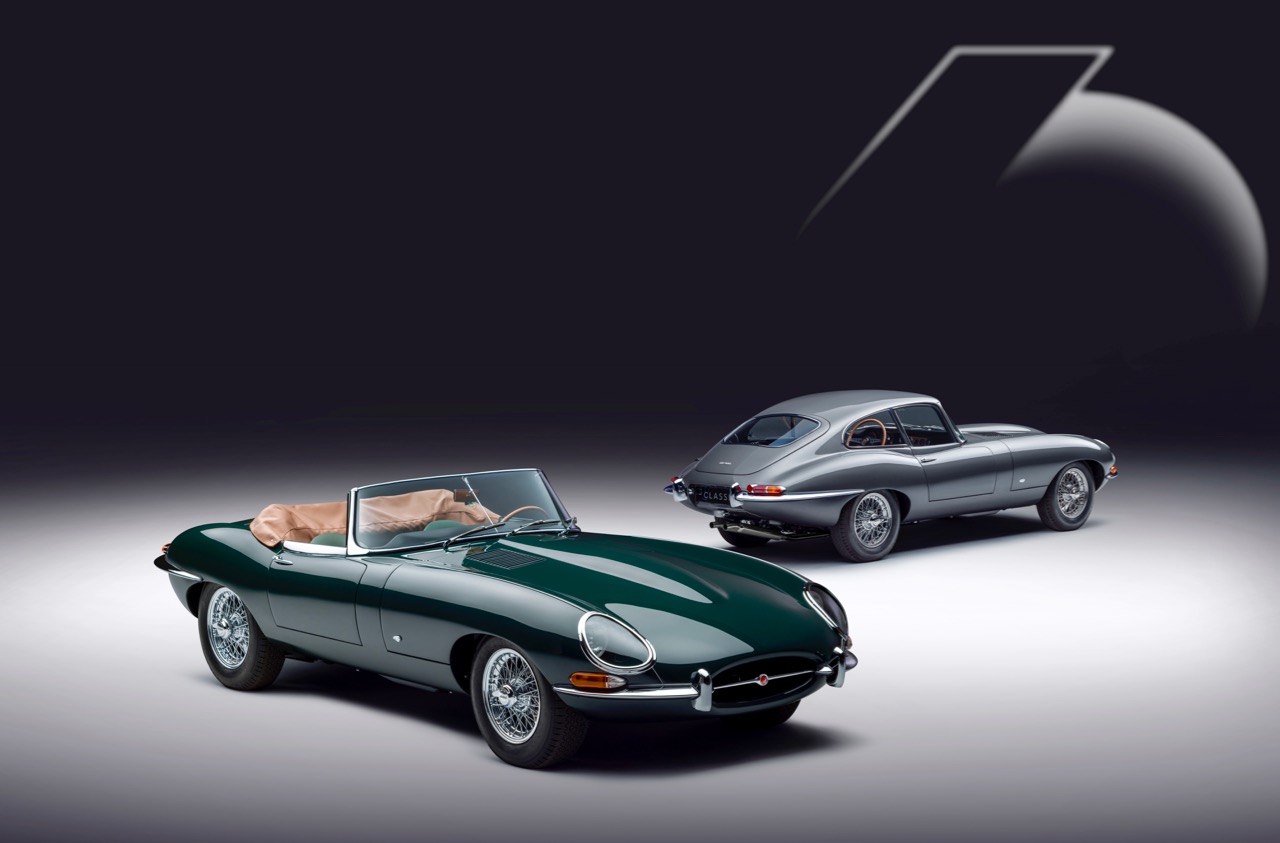 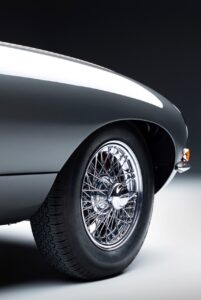 Jaguar Classic has unveiled its first matched pair of E-type 60 Collection vehicles, and revealed full specs for the 12 restored and sympathetically uprated 3.8-liter E-types built to celebrate 60 years of the iconic sports car.

Six decades after the the E-type’s world debut in Geneva, Switzerland on March 15, 1961, the E-type 60 Collection pays tribute to these two legendary vehicles: the Opalescent Gunmetal Grey coupe ”9600 HP,” driven by publicist Bob Berry to make the launch itself, and the British Racing Green roadster “77 RW,” driven by Jaguar test driver (1952-1985) and Works racer, Norman Dewis OBE who was told to “drop everything” to get to Geneva the next day.

“Sixty years after its unveiling at the Geneva Motor Show in March 1961, the talented team at Jaguar Classic are releasing the ultimate birthday present to the E-type: the E-type 60 Collection,” said Dan Pink, Director, Jaguar Classic. “The attention to detail demonstrates how this project has been a labor of love for our designers, engineers, craftspeople and partners. Exquisite detailing combined with enhanced usability ensure these E-type vehicles will be coveted and enjoyed for decades to come by their discerning owners, starting with a once-in-a-lifetime Coventry to Geneva pilgrimage for our six customers and their guests in Summer 2022.” 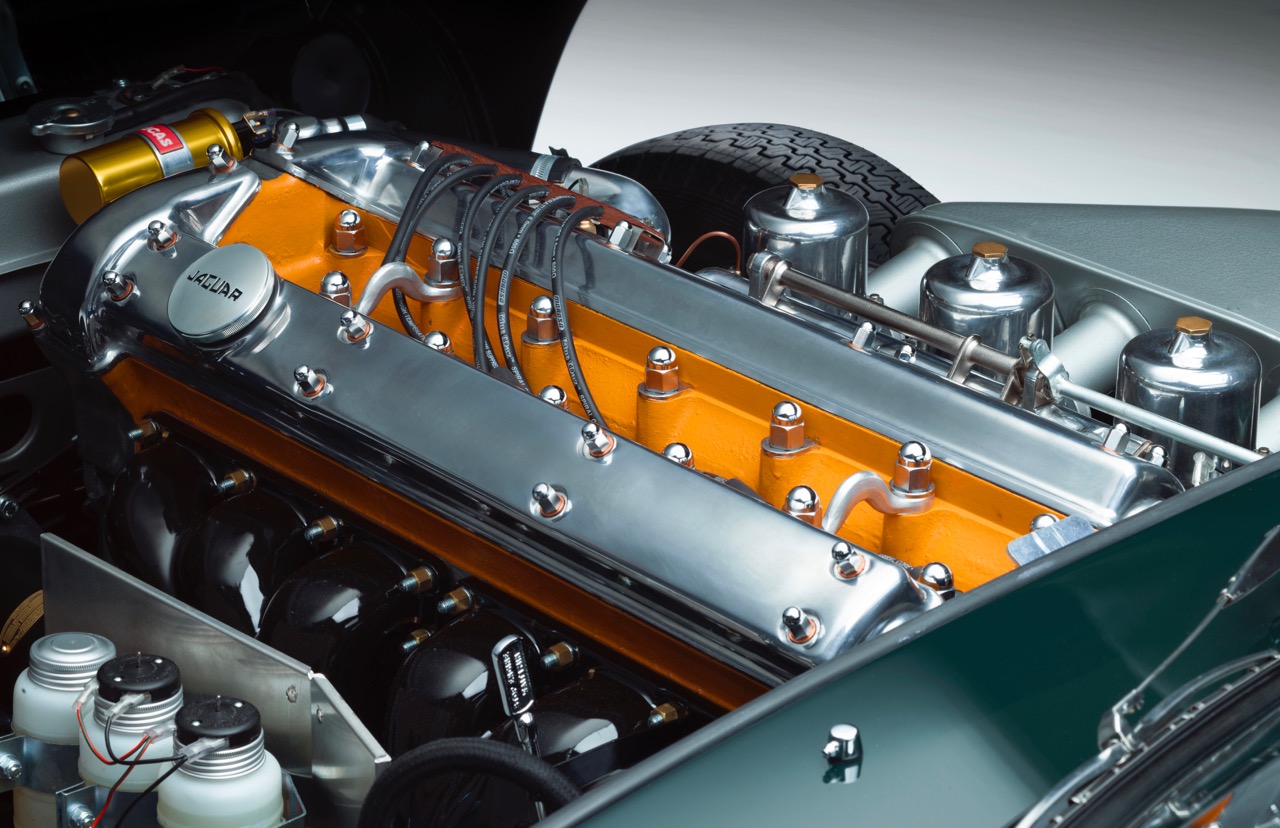 The E-type 60 Collection vehicles, which are sold as a pair (one E-type 60 Edition coupe, one E-type 60 Edition roadster) are finished in exclusive Flat Out Grey and Drop Everything Green paint colors, respectively. These color formulations are inspired by the original 1961 colors and will not be used on any other Jaguar vehicle. Restored and refined by the experts at Jaguar Classic in Coventry, the JAGUAR E-TYPE 60: TIMELESS TREASURE TRIBUTES combine flawless quality and exceptional engineering. 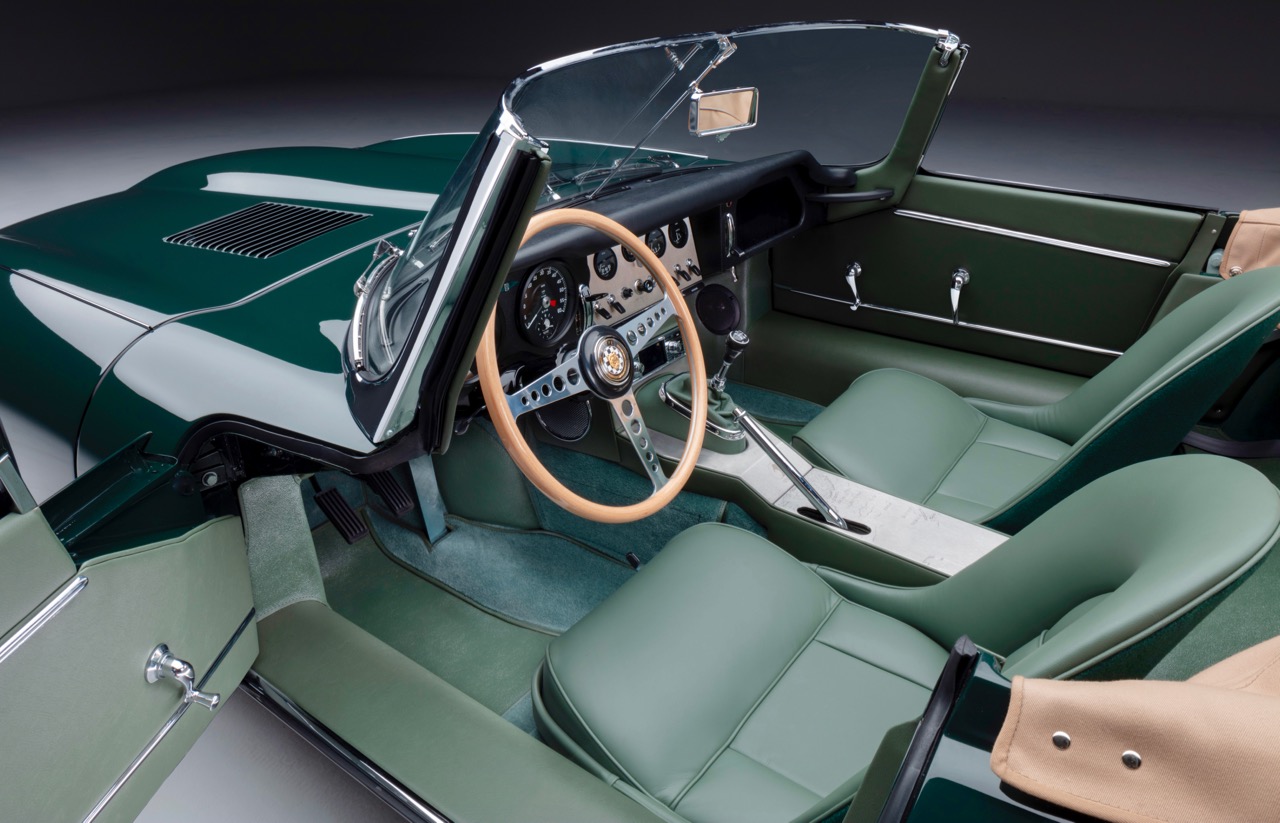 The vehicles also feature a range of unique E-type 60 design elements developed in conjunction with Julian Thomson, Jaguar Design Director, subtle enhancements for improved usability and drivability, and the Jaguar Classic Infotainment System with built-in satellite navigation and Bluetooth connectivity. The most distinctive visual highlight on each vehicle is an engraving by artist and designer Johnny Dowell, aka “King Nerd,” on the center console of each car, recalling the drive routes from Coventry to Geneva of those original vehicles. Each piece of art takes more than 100 hours to create by hand, in consultation with the owner.

“This was a fantastic opportunity to design and engrave the stories of two epic drives by two Jaguar legends in these iconic and special cars,” Dowell said. “A permanent reminder of the anniversary, everywhere these E-type vehicles go, the memory of Bob Berry and Norman Dewis will travel with them.” 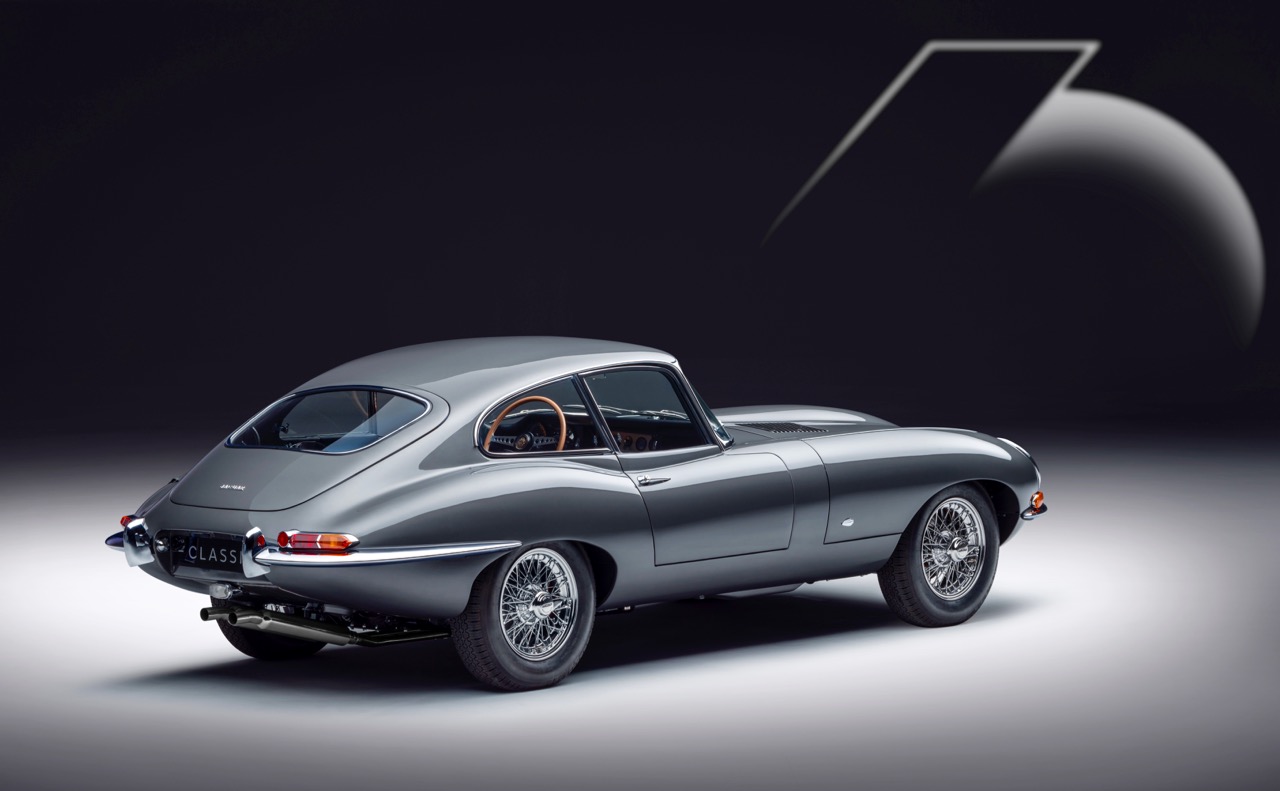 Each Smooth Black leather-trimmed coupe features a stylized route map plotting the key locations along the route taken by Bob Berry, with an overhead sketch of the E-type and the phrase, “I thought you’d never get here,” recalling the reaction of Jaguar founder Sir William Lyons to the arrival of Berry just moments before the unveiling. For the six Suede Green leather-trimmed roadsters, the engraving tracks the route taken by Dewis on his last-minute drive to Switzerland, with a sketch of the vehicle and an instruction by Lyons to Dewis: “Drop everything and bring the open top E-type over.” 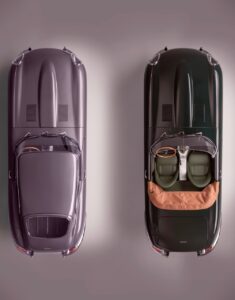 In addition to the center console, the hood badge, clock face within the tachometer, fuel cap and chassis plate are all finished with a commemorative E-type 60 logo created by Jaguar Design, featuring the years “1961-2021.” A light beech-rimmed steering wheel, as fitted to 1961 vehicles, features a 24-carat gold horn button. Each vehicle is supplied with a tailor-made E-type 60 car cover, tool roll and jack storage bags to complete the enhancements and exemplify the attention to detail lavished on each vehicle.

But wait, there’s more! In addition to the celebratory E-types, Jaguar will also be offering an exclusive watch set and a rare whisky British watchmaker Bremont has created a chronograph and rally timer to mark six decades of the iconic sports car. Glenturret distillery has released an E-type whisky, crafted to evoke its unique spirit.

Both commemorative items are strictly limited. There are only 120 examples of the Bremont watch box set – 60 each in green and grey, one for each year of the existence of the E-type. The whisky is limited to 265 bottles, representing the horsepower of the launch-specification E-type. 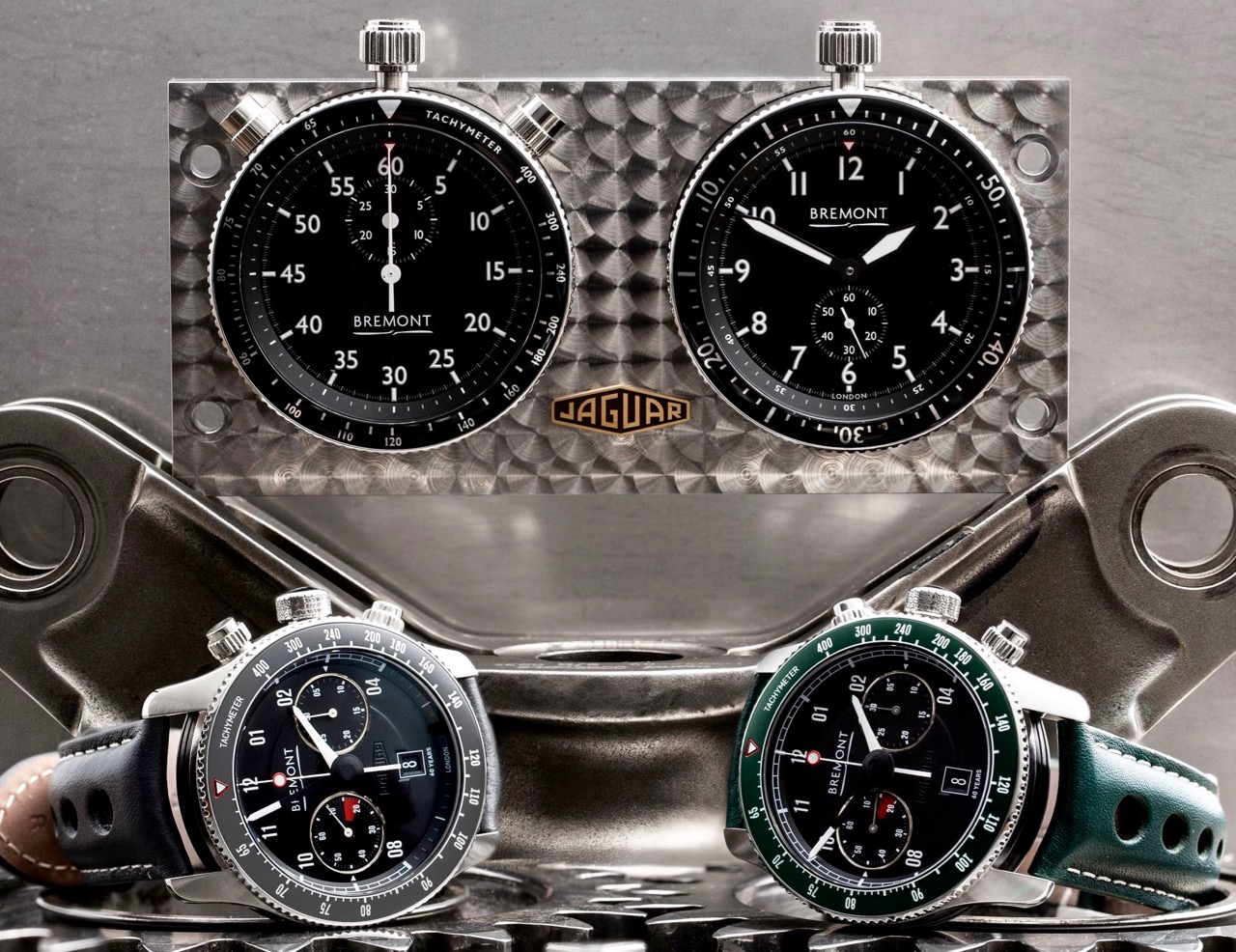 Each E-type-inspired Bremont Watch and Rally Timer Box Set includes a bezel chronograph in green or grey—the colors of the two vehicles that debuted in Geneva 60 years ago—as well as the first-ever rally timer produced by Bremont. The combined stopwatch, tachymeter and clock can be displayed on a stand or fitted to a customer’s car. All 120 customers will also be offered the exclusive opportunity to drive three classic E-type vehicles on a visit to the Jaguar Fen End facility.

“Working with Jaguar on the 60th celebration of this iconic car is a real honor,” said Nick English, Bremont co-founder. “There is so much detail and inspiration to work with on the watch designs and doing a rally-timer for the first time is a perfect tribute.” 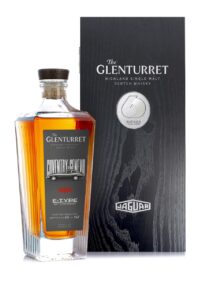 The Glenturret E-type 60th Anniversary Single Malt Scotch Whisky is crafted at the oldest working distillery in Scotland, to evoke the charisma and spirit of the E-type. Each bottle bears a design from Jaguar Classic and is presented in a custom wooden box, together with a bespoke book and key ring.

In Summer 2022, the six customers and their guests will take part in the ultimate E-type pilgrimage: a Coventry-to-Geneva drive experience with their vehicles to create their own E-type memories, enjoying breath-taking scenery, epic roads – including iconic Alpine passes – exclusive stays and fine cuisine.