Skip to content
SVRA enjoyed a second year at the Indianapolis Motor Speedway with its Vintage Racing Invitational. Mike Matune was trackside for the Chronicles. 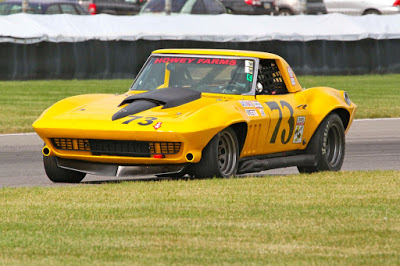 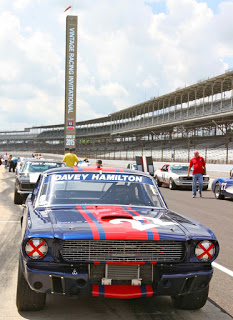 Clark Howey’s ‘66 Corvette won its class at Daytona. After more than 20 years and numerous owners, it is once again owned and raced by Howey. So much more than just racing, the event encompasses a car auction, car show, Jaguar exhibit and autocross and an enactment of the very first event at the Speedway – 1909 hot air balloon race. To us, the signature event is the Indianapolis 500 Legends Celebrity Pro-Am that matches 33 former Indy 500 starters with vintage drivers in stunning examples of American Muscle. ’65 Mustang, right, of Davey Hamilton & Frank Marcum awaits the race on the pre-grid. Hamilton is an eleven-time 500 starter with three Top 10 finishes to his credit.
Pro Bob Lazier and Amateur Jim Caudle in Caudle’s ‘68 Corvette, below, took home the victory and bragging rights. They bested all comers and survived an active race; our congratulations on their well-earned victory. 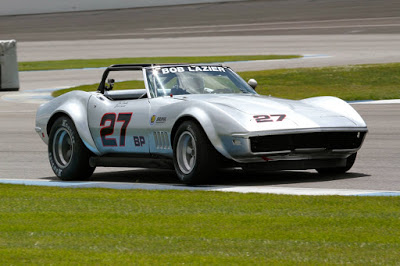 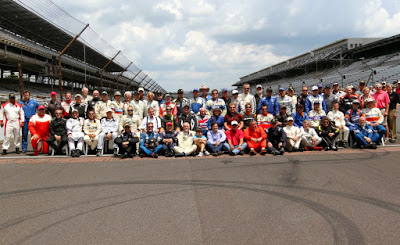 Set appropriately at the “Yard of Bricks” a group photo shows the 33 Pro-Am teams along with distinguished guests like Honorary Stewards Janet Guthrie & Tom Sneva. As you walked through the crowd gathered in pit lane, you were struck by how close the racing community is and how much respect they have for each other. 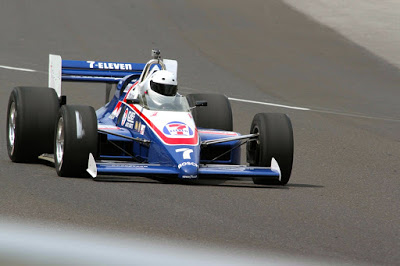 Racing included events run on both Indy’s road course and oval. Here James Webb’s March 86C looks right at home at speed on the oval. This car finished second in the 1986 Indy 500 driven by Kevin Cogan. 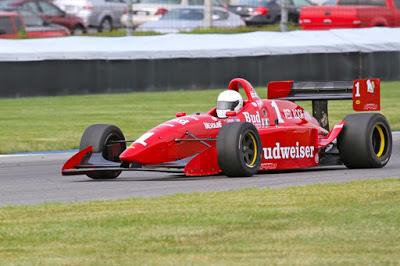 Cogan was beaten in 1986 by Bobby Rahal in this March 86C. Rahal caught and passed Cogan very late in the race on a restart. It’s owned and driven by Patrick Ryan, shown here on Indy’s road course. 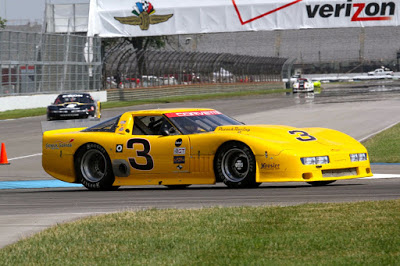 Casey Putsche takes his tube frame Corvette through the hard left-hander at the end of the back straight.  Putsch’s car has history as a GT1 racer. The car is crewed by the Genius Garage, a group of engineering students getting valuable hands on, real world experience. Their collective efforts would net a fourth place finish in one of the Group 10 races in the car’s inaugural competition appearance. 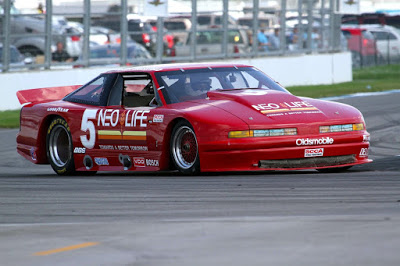 Before Ike Keeler returned it to the configuration of its Trans-Am glory days, his Old’s Cutlass followed a path so common with vintage racers. It had been a front running car campaigned by Darin Brassfield. Then it worked its way through a re-body or two as it moved to other teams in Trans-Am and eventually into SCCA Club Racing. Today it displays all of the features of its initial configuration including a ChevyV-8, tube frame and fiberglass “silhouette” body. 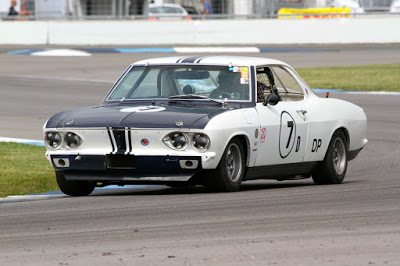 Janet Guthrie and fellow female racing pioneer Lyn St. James were there, competing in the Pro-Am. Adding to the historical perspective of women in motorsports was this car, Donna Mae Mims’ Yenko Stinger (YS-085). Today it is owned and raced James Schradt. 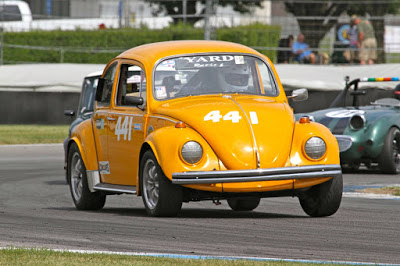 With a production life of something like 65 years and with over 20 million produced, you would think the sight of a Type 1 VW “Beetle” in competition would be more common. Victor Frazzell has taken on that challenge, actively racing his 1968 version. The car pays tribute to a VW raced in the under 2.5-liter Trans-Am in period by Allen Treuhaft. 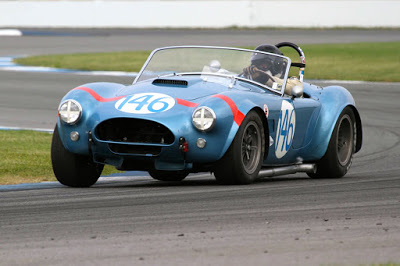 Chris MacAllister’s Cobra is steeped in history. Bearing chassis number CSX 2323, the car is one of a handful of FIA roadsters raced in FIA events in pursuit of the World Manufacturers Title. Making its debut in the Targa Florio driven by Grant & Gurney, the car would next appear with Ireland at Spa before a crash at the Nurburgring by Enzo Arena would end its Shelby racing career. Rebuilt, it soldiered on back in the U.S. at Daytona, Sebring and around the Southeast in the SCCA. 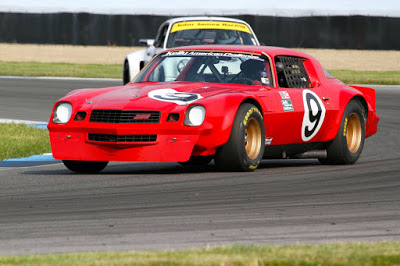 Tom Weglarz and friends built this Camaro in 1981 for the Kelly American Challenge. It started as a 1970.5 Camaro body of undetermined origin and was assembled using pieces from GM racers of the Trans-Am era. Updated to 1981 body style, it has fiberglass panels from the then current IROC Camaros. Interesting is that in its post-Kelley racing life, it ran the “Hot Rod Power Tour” with Olds power and was featured in the November 2010 issue of Hot Rod. Today it’s powered by a 331-inch Chevy. 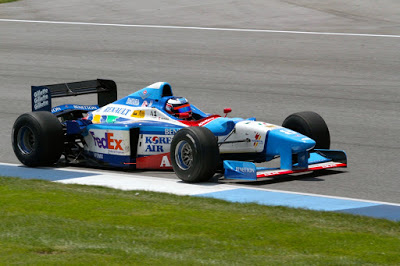 Benneton would finish third in the 1997 Formula 1 Constructor’s Championship behind Williams and Ferrari with its Renault powered B197 chassis driven by Gerhard Berger and Jean Alesi. At Indy, we see Brian French in his B197 hugging the curb on another quick lap around the circuit.

Special thanks to Jan Hyde, Registry of Corvette Race Cars and Tim Sullivan & Taylor Clauson at the Speedway for their help with credentials.