In these days of “Social Distancing” and “Stay at Home”, we have decided to offer our readers a new feature called In Detail. In these short-takes, we will examine cars (and sometimes their designers & engineers) up-close. These are cars our staff has found interesting. They may not always be mainstream as our staff is an eclectic lot with broad automotive interests, but they are cars they felt worthy of focusing on, starting with IN DETAIL: GENIUS OF HARLEY EARL. We hope you will find these cars (and people) interesting. 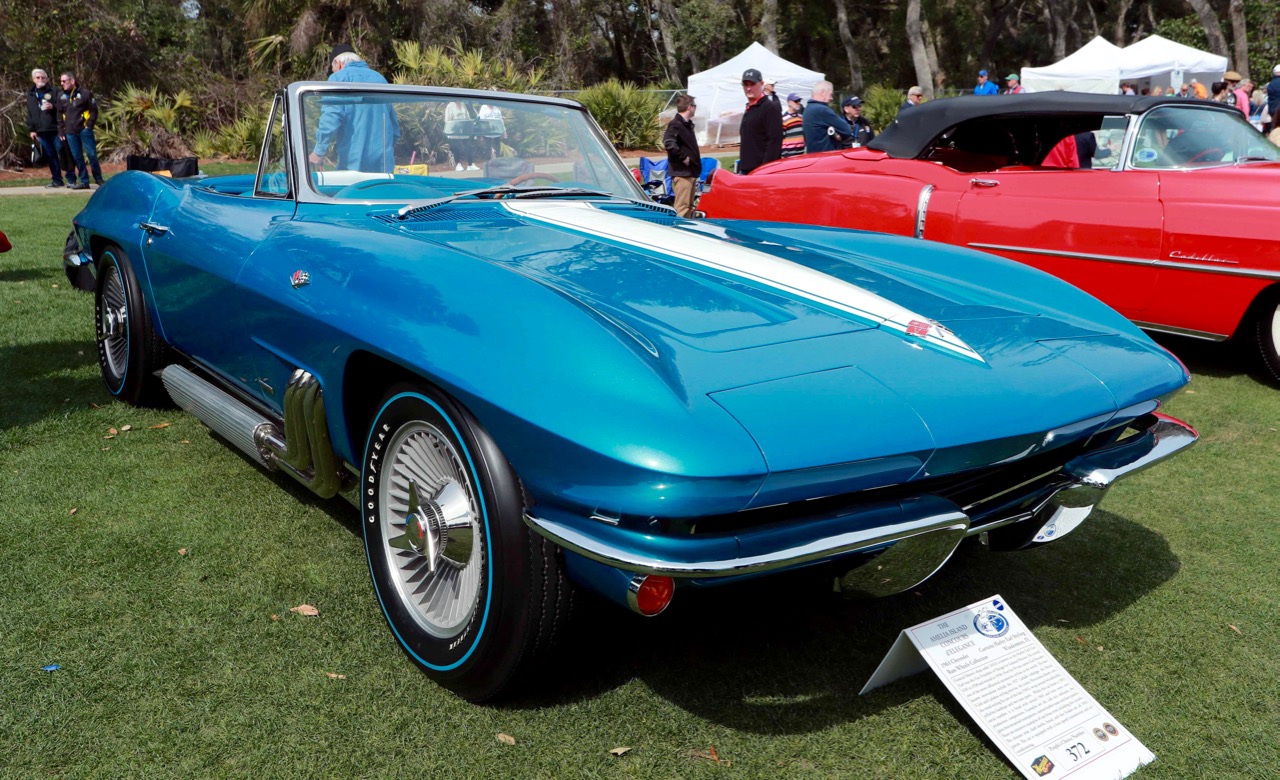 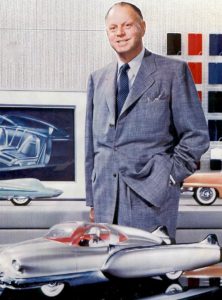 Maureen & Mike Matune start us off with a look at a couple of the cars from the Cars of Harley Earl exhibit at this year’s Amelia Island Concours d’Elegance. Harley Earl’s genius and influence on General Motors and the auto industry as a whole cannot be understated. He is unquestionably the Father of the Concept car.

According to the Harley Earl, right, website: “Even after his retirement in 1958, his presence could still be felt in GM with every succeeding styling chief. Harley’s accolades are as numerous as they are diverse: inventing the concept car, being the first to use full-size clay modeling, first on-board computer in a car, hiring and advancing women car designers, the Corvette, first hands-free autonomous cars, creating the landmark Car Design Scholarship program, and supplying the auto design curriculum to such universities as Art Center College of Design and Pratt Institute. From university students to Vietnam veterans to Fortune 500 executives and Nonprofits, the story behind this American auto heritage is as important as it is inspiring.”

The Rare Wheels Collection showed the Harley Earl Corvette, top, a ’63 Sting Ray convertible constructed by GM under shop order (S.O) 10323. The car can be confusing to the eye as it includes numerous custom touches and features not found on the first of the mid-series Corvettes available to mere mortals until considerably later in the (C2) Sting Ray era. That includes (1965) four-wheel disc brakes. 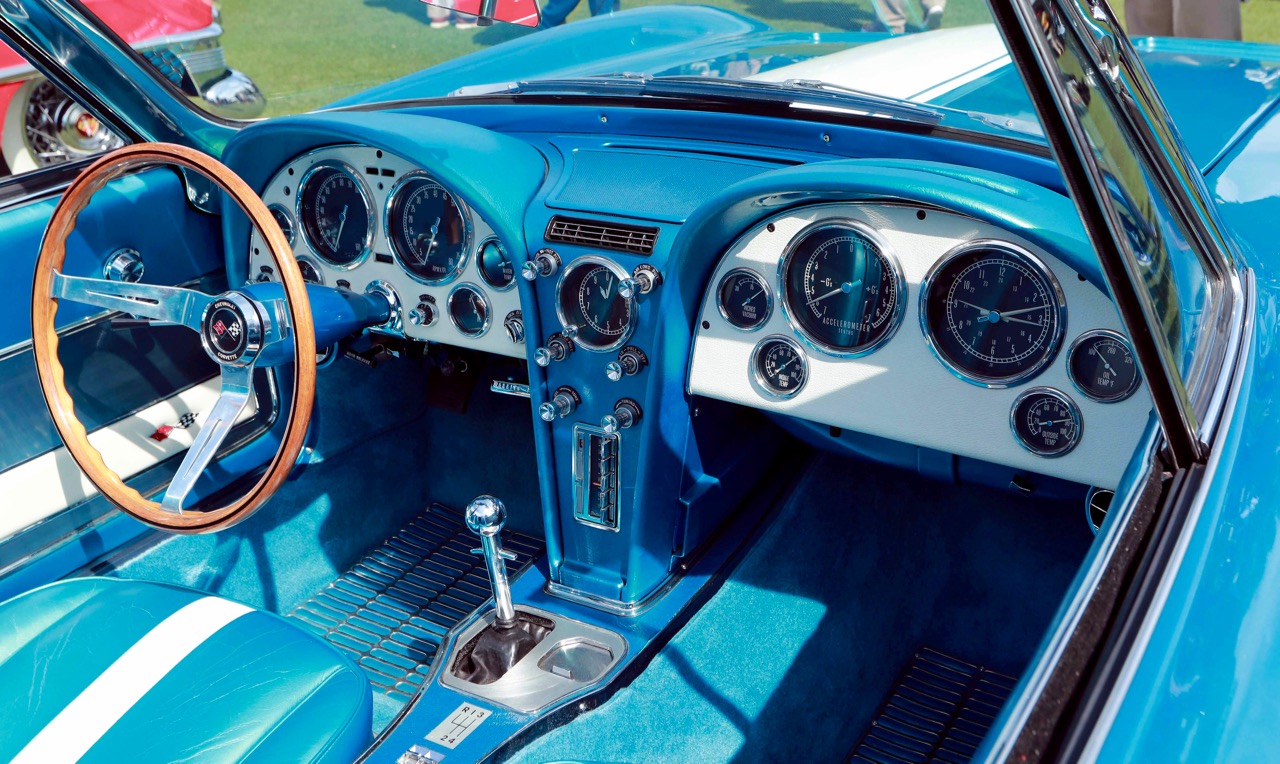 Harley Earl was obviously interested in performance so the car had to have a four-speed. But he also wanted luxury exemplified by the air conditioning. Seats and door panels were custom fabricated with leather trim. The dashboard grew copious amounts of additional instrumentation including an accelerometer, inside & outside temperature gauges and a second, larger clock. Currently under the hood is a 327/300 engine. 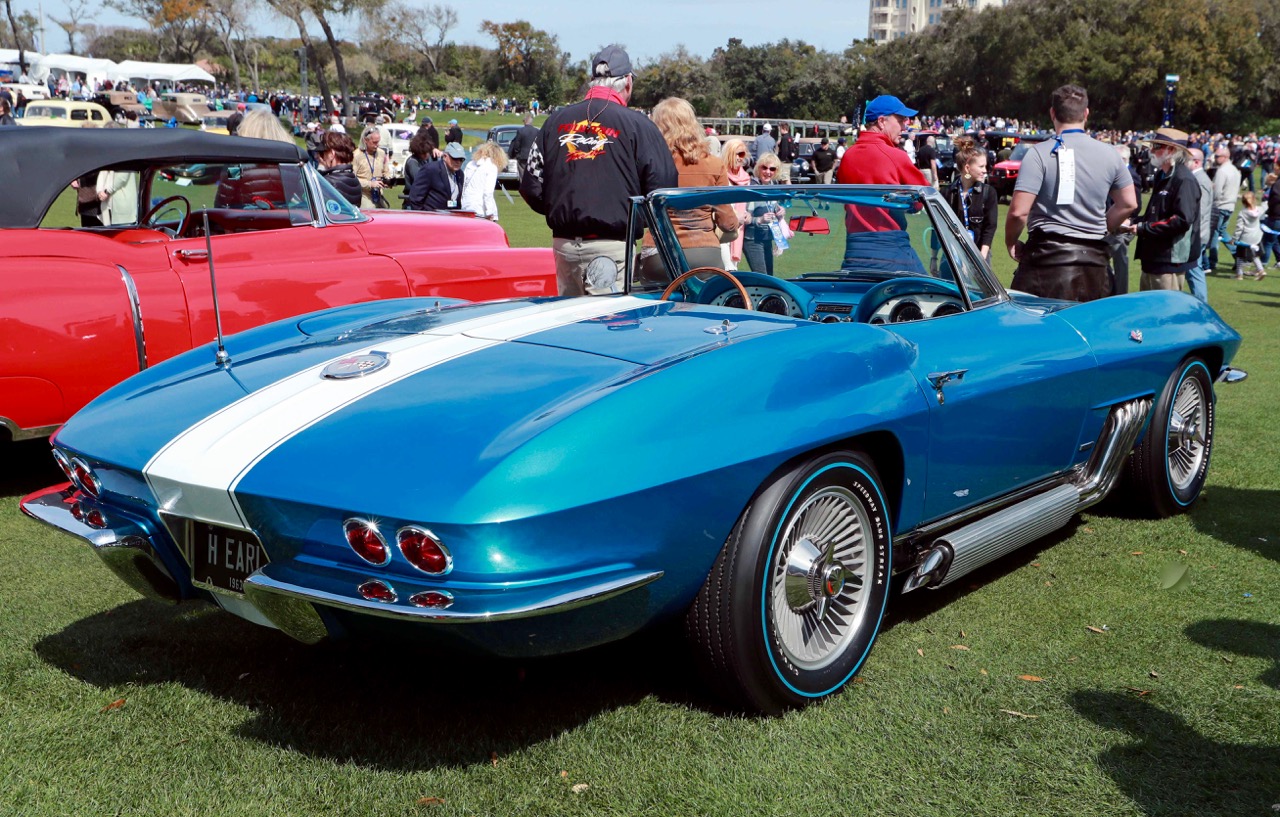 From the rear, we see blue-stripe tires mounted on knock-off rims that match the body color. The side exhaust foretold a regular option on later Corvettes, although these are unique and more closely related to those on some period racecars than the ones that first surfaced as optional on 1965 models. On the front fenders are two small plaques identifying the car as a product of GM Styling. 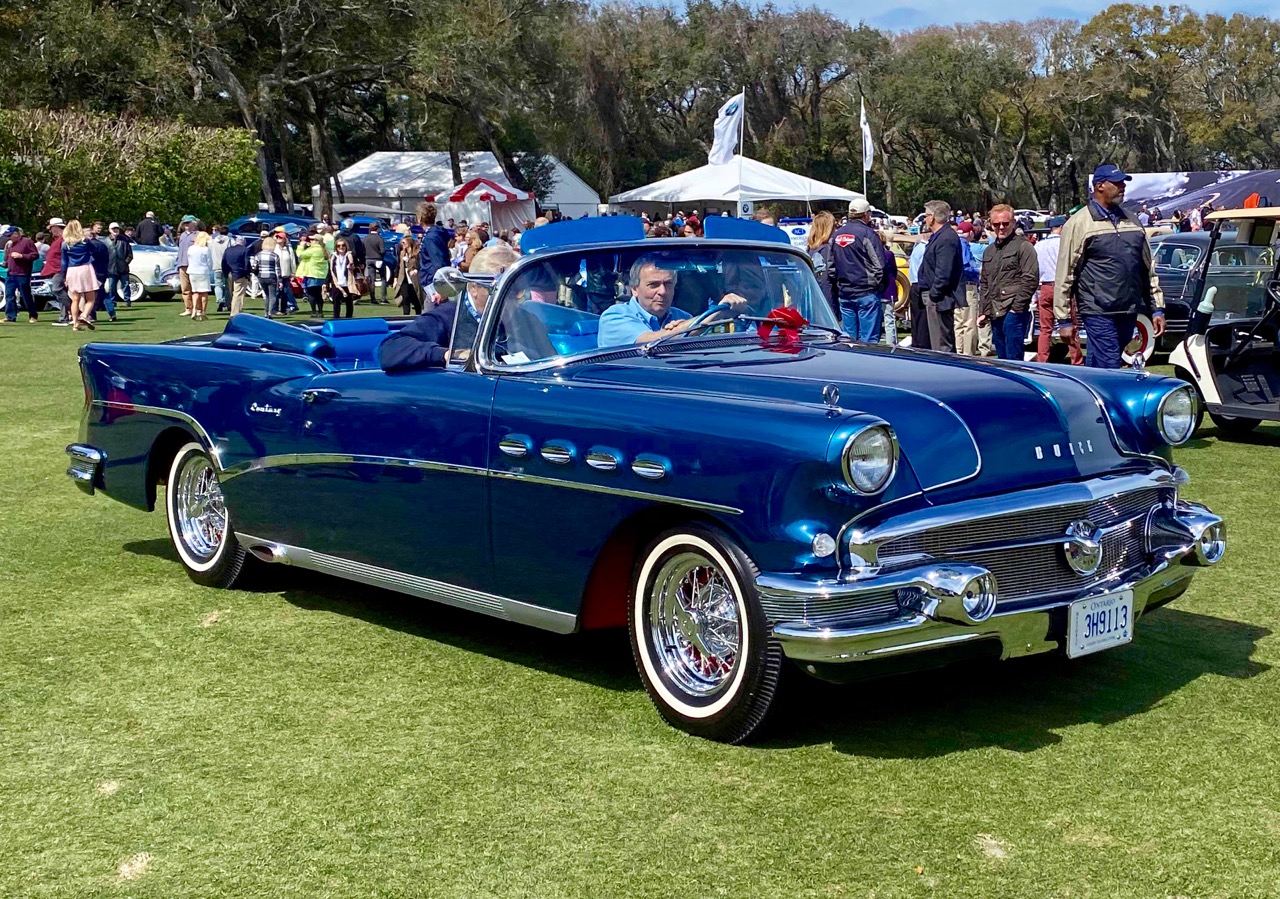 Looking quickly at Steven Plunkett’s ‘56 Buick Century Convertible you could easily mistake it for a stock or mildly modified example. Bill Mitchell superseded Harley Earl at GM Styling and this became Mitchell’s company car. The 1956X Buick Concept was the recipient of over 225 modifications. Most are so subtle; you need to study the car. Note that the undercarriage and wheel wells are painted red. Wire wheels with knockoffs grace each corner. Driving lights are housed in the bumperettes. The exhaust system has been modified to exit on the side, its outlets blended into the rocker panels. The hood is two-tone blue with accenting, custom trim. 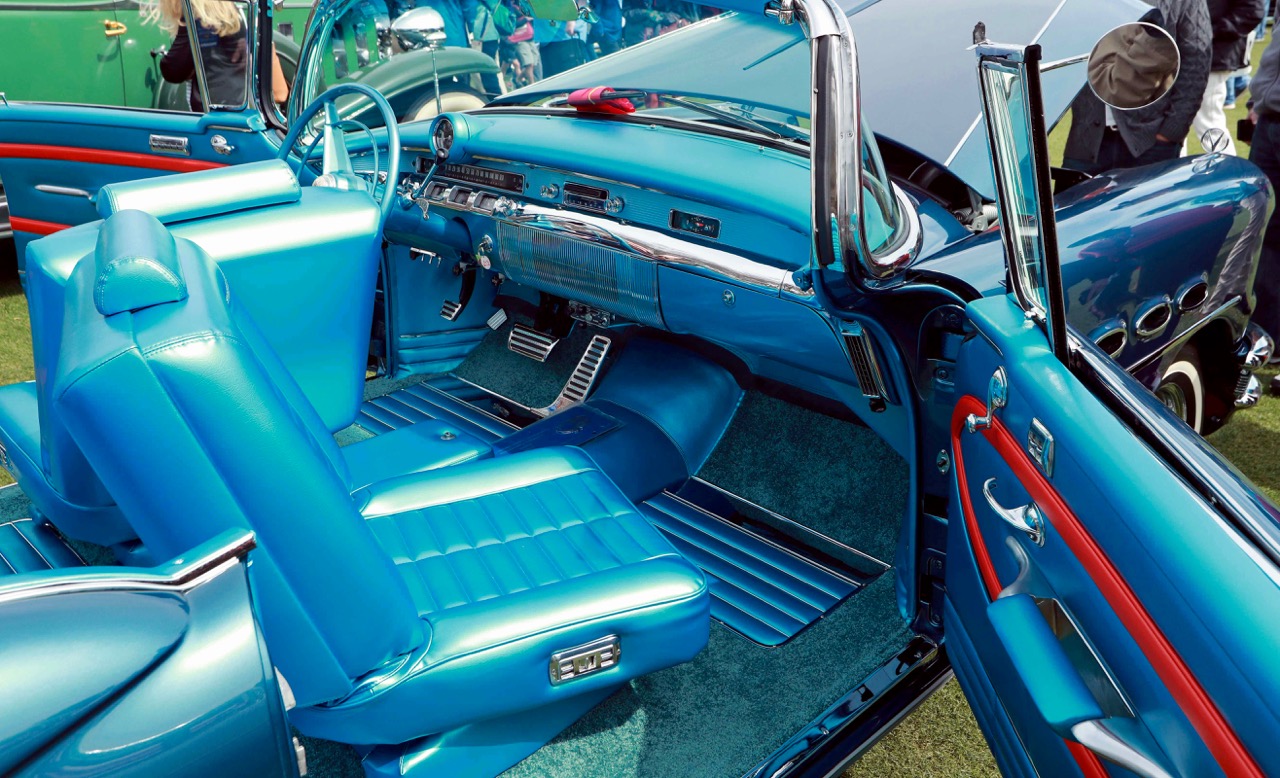 Moving inside to the interior, we find swiveling power buckets seats with powered headrests. Above the steering wheel is a binnacle mounted Corvette tachometer. The foot pedals are trimmed in chrome. All of these changes are on top of the normal luxury found such as power windows and steering. 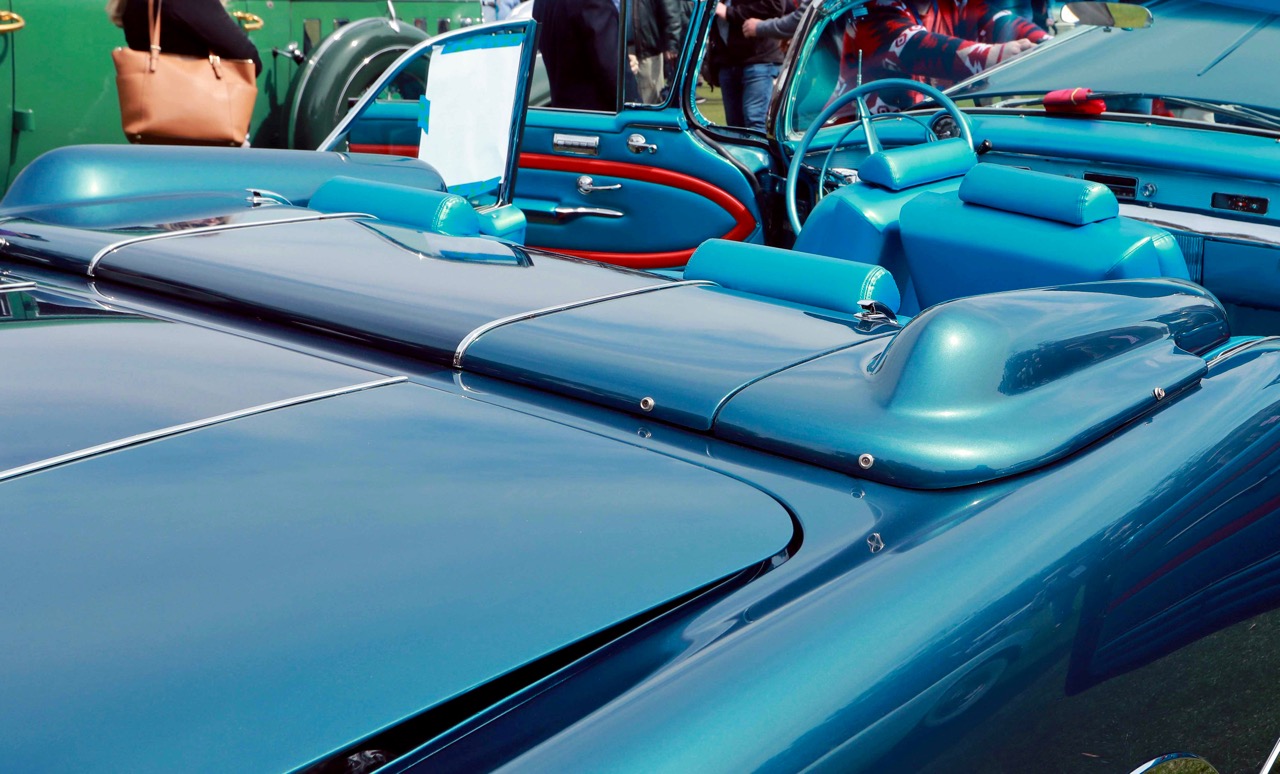 At the rear of the interior, a fiberglass “parade boot’ from a Cadillac Eldorado has been modified to fit. These solid panels replaced the normal cloth cover to smooth the car’s styling and give a waving, smiling beauty queen a place to sit during parades! 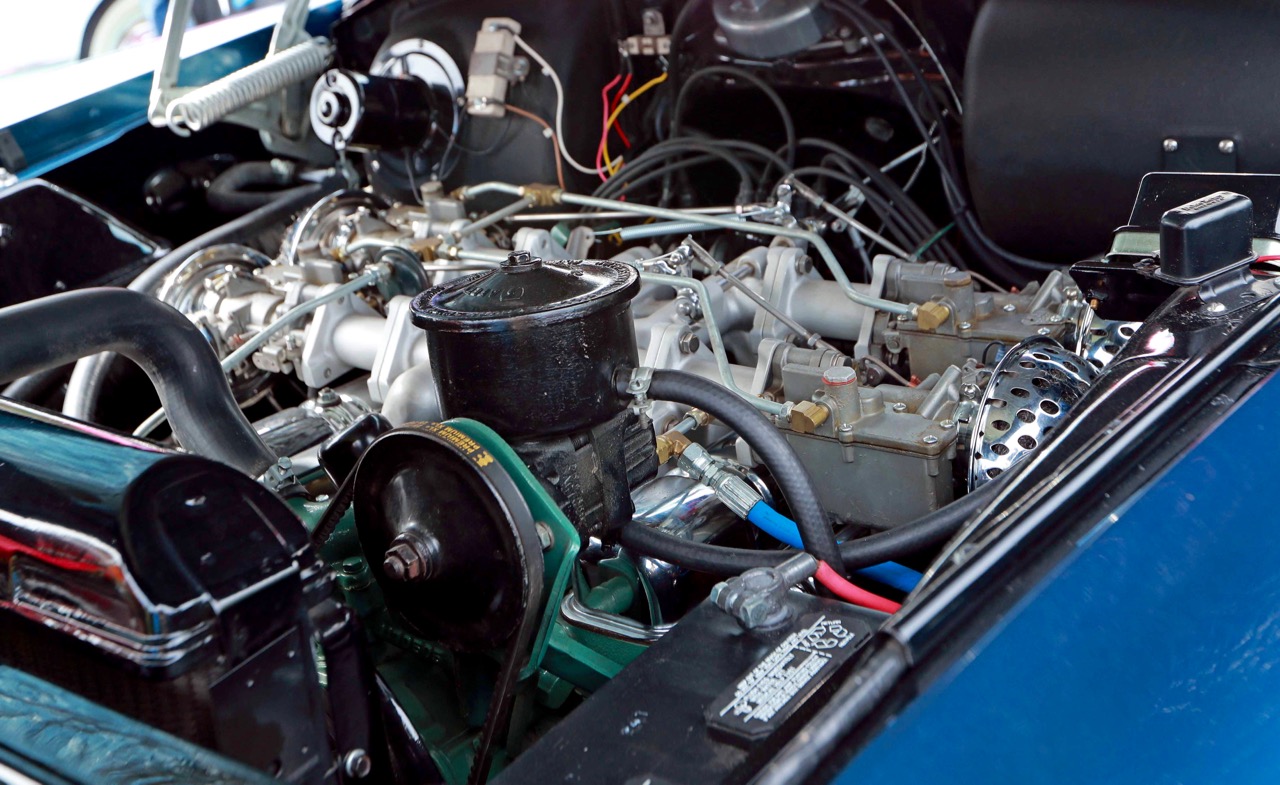 Underhood, the Buick OHV V8 is fitted a custom manifold fitted with four side-draft carburetors, sourced from the early Six-cylinder Corvette parts bin. It is said only two such manifolds were built, this one and the one on the stunning Buick Wildcat II show car. 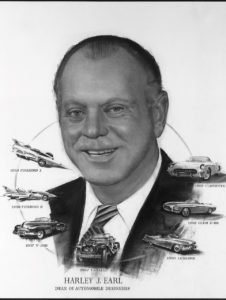 We trust you have enjoyed IN DETAIL: GENIUS OF HARLEY EARL. We welcome comments from our loyal readers and subscribers.

For more information about IN DETAIL: GENIUS OF HARLEY EARL, please visit  http://www.harleyjearl.com/

More information about the Cars Of Harley Earl and the Amelia Island Concours, can be found here  https://www.ameliaconcours.org/