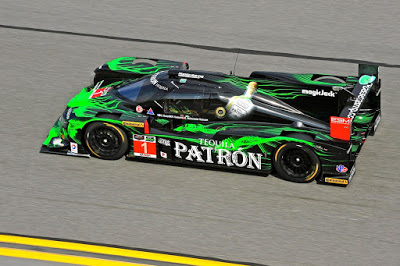 Honda Performance Development has upped the ante this year at Pikes Peak by entering one its newest sports cars in the race up the 14,110-foot mountain. The new Honda-powered HPD ARX-04b LMP2 coupe that competed in this year’s Rolex 24 Hours of Daytona has been entered in the 2015 Pikes Peak event, and will be driven by Verizon IndyCar Series race winner and former Formula 1 driver Justin Wilson.

It will be the first full-carbon monocoque vehicle ever sanctioned for PPIHC entry and will be fitted with a 3.5-liter V6 twin-turbocharged engine. The ARX-04b will compete in the Unlimited Class, which features highly modified cars that can navigate the 156 turns of the 12.42-mile course in under 10 minutes.

“This is an exploratory effort, to learn as much as we can in advance of a possible future assault on the outright record: 8:13.878, set by Sebastien Loeb in 2013.  We want to see how well our ARX-04b chassis adapts to the rigors of the Climb, and the high-altitude demands placed on our production-based V6 engine,” said Art St. Cyr, President of Honda Performance Development.
“We’re looking forward to this. We hope to have a lot of fun, and we’re certainly not holding back with Justin Wilson behind the wheel. We think the fans will enjoy the show, as well.”

The ARX-04b, which was developed through a joint effort between HPD and Wirth Research, features energy-efficient technology with low drag and high fuel efficiency and quick change front and rear bodywork. It will be in the capable hands of Wilson, who has made 171 combined starts in Indy Car and Champ Car competition, with seven wins and eight poles.

“It’s going to be a lot of fun driving the Honda ARX-04b up the hill and giving it everything I’ve got,” Wilson said. “This is my first time competing at Pikes Peak and I’m really looking forward to the experience. I’ve run with Honda at the Indy GP and the ‘500’ this year, and also have run Formula E and at the 12 Hours of Sebring. But this will be every bit as difficult as any of them. I’m looking forward to the challenge and working with everyone at Honda.”

The Pikes Peak International Hill Climb takes place on June 28, with practice and qualifying taking place on various sections of the course from Tuesday to Friday. Fans can follow the progress and see photos and information from the Honda Racing efforts at Pikes Peak via Twitter: https://twitter.com/HondaRacing_HPD and Facebook: https://www.facebook.com/HondaRacingHPD.