Most of racing’s great stories (and some of its great drivers) are not on radio or TV. You gotta go see it for yourself, blogs Stephen Cox. 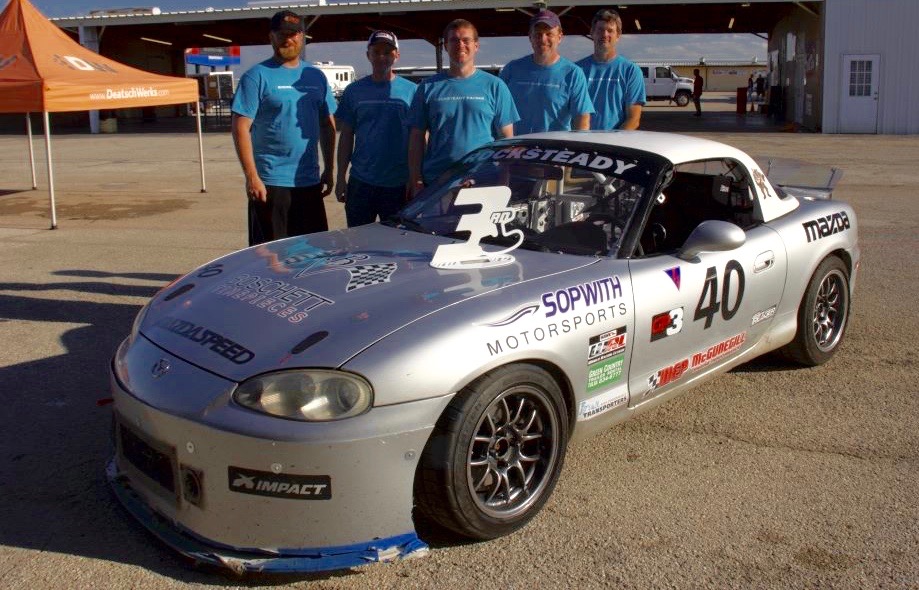 Al Unser, Sr. used a hotel lobby display car to win at Indianapolis in 1987. Juan Fangio at 46 years old broke and re-broke the Nurburgring lap record three times during his miracle Formula One victory in 1957. Every motorsport enthusiast can recite a list of the great driving performances in auto racing history. But many of the sport’s truly amazing drives will never be known, not because the feats were less dramatic but because they occurred at amateur events with anonymous drivers. Like this one.

On Sunday, May 31, 2015, Texas World Speedway was blazing hot. The endurance sports car race was 16 hours long, spread over two days featuring nearly 100 teams with four or five drivers each, competing on a three-mile road course. 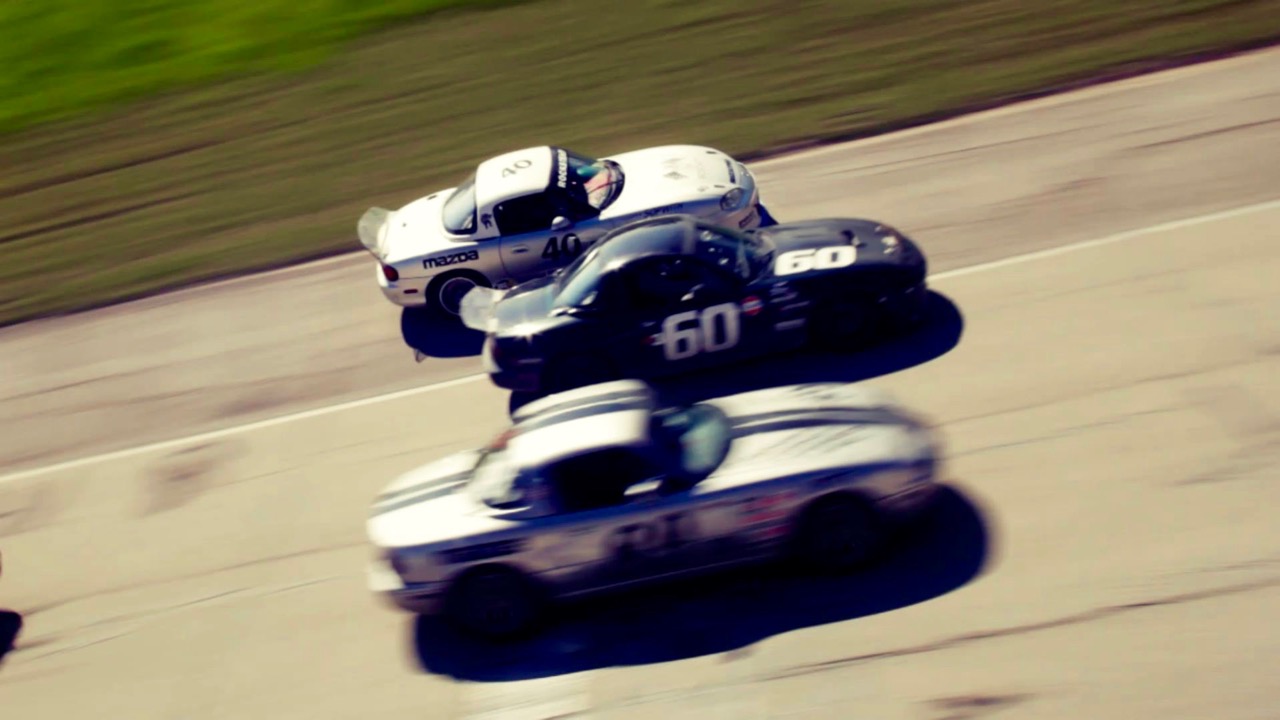 After 14 hours, Rocksteady Racing drivers Jim Rowland and Brian Beasely had done their jobs well, putting the team’s Mazda Miata racecar in position for a podium finish. Crew chief Chris Mills managed pit stops and driver changes while calling team strategy over the radio. The car was fast and competitive, spending most of the weekend between third and sixth place in their class. The team’s goal was to score their first series podium in the massive, 32-car GP2 class, and they were on the verge of making it happen.

With just two hours remaining, team owner Todd Carver took over driving duties for the final stint of the race. Carver pulled out of the pits in fourth place, needing to make up just one position to secure a podium finish. Climbing out of the car during the driver change, Beasely had warned him that the brakes were fading badly. That was an understatement. They were completely gone.

“We had no brakes because of a busted hub that had so much movement that it was machining the upright,” Carver remembered. “The rotor wasn’t broken and the tires were okay, but nothing was pointing in the right direction because the hub was so busted.”

The car was hard to turn and impossible to stop. The silver Miata’s tail was visibly sliding around in Turns 10 and 11, the tightest corners on the Texas “roval,” with Carver cranking the steering wheel in the opposite direction to keep the rear end of the car behind him. 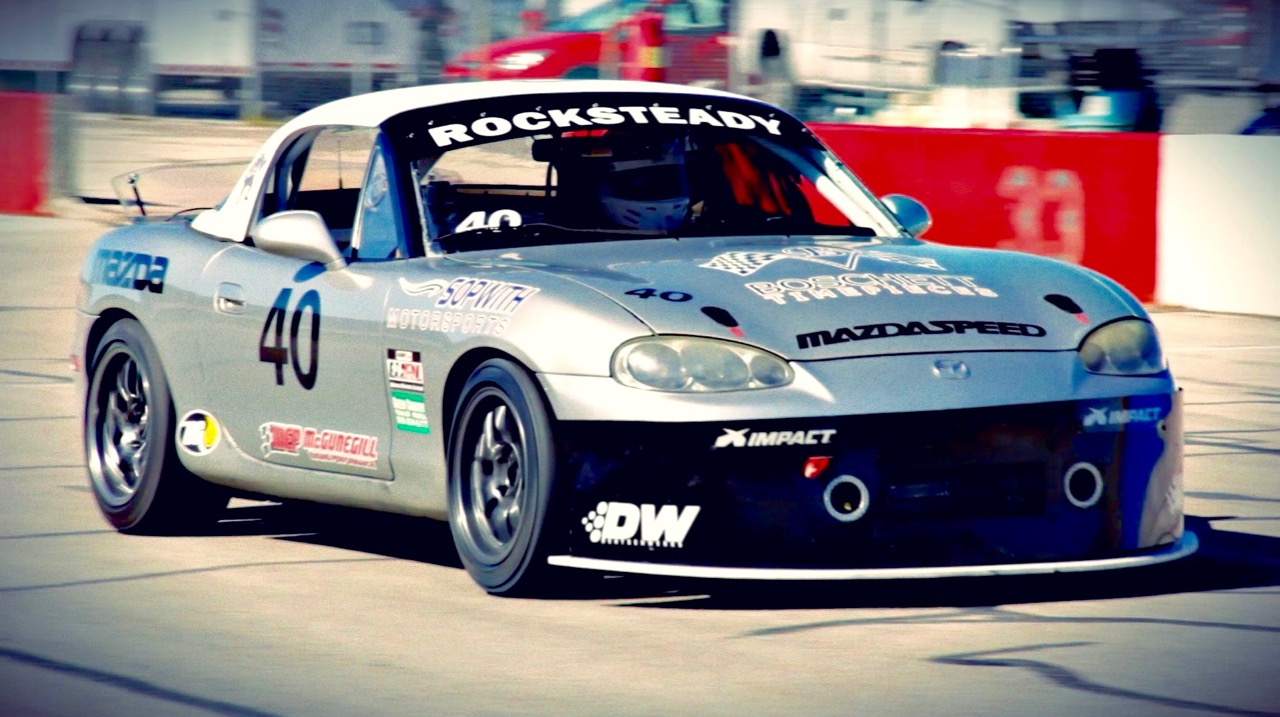 The straightaways were even worse. With no brakes, Carver had to let off the gas and start pumping the brake pedal as soon as he crossed the start/finish line in order to keep the car from overshooting Turn 1 at 100 mph. Only after several pumps on the brakes did Carver say he could finally “square the rotor up enough to actually slow the car down.”

Although he was passing lapped traffic regularly and turning lap times that were downright amazing under the circumstances, Carver was unable to close the gap on the third place car. In desperation, the team began to contemplate an unscheduled pit stop to see if any of the damage could be repaired. With forty minutes remaining in the 16-hour event, it looked as if a podium finish would slip away.

“Hey, Todd!” The voice of crew chief Chris Mills crackled over the radio. “We need to stay out. Don’t come in, just stay out.” With a six-lap gap over fifth place, Mills figured it was unlikely that Carver would be overtaken and lose the position. But if he could manhandle the car across the finish line, any mechanical failure among the top three cars would still put Rocksteady Racing on the podium. So Mills rolled the dice, and won! 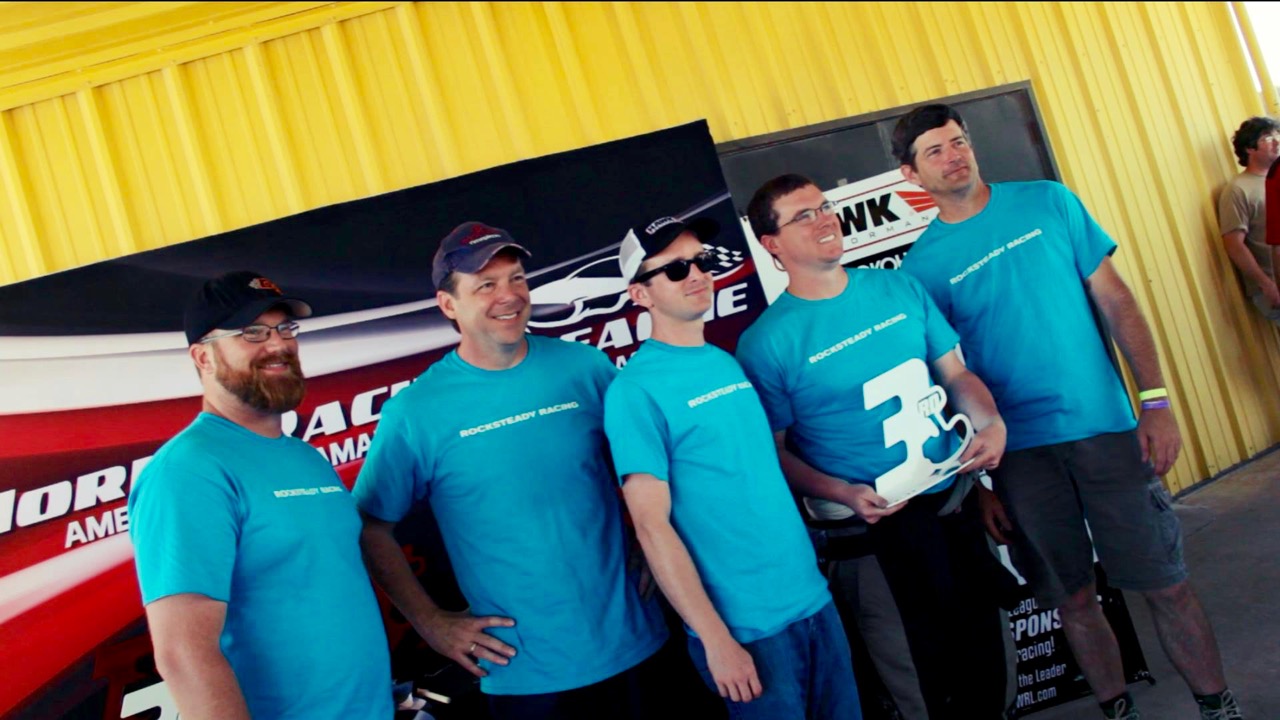 With half an hour remaining, the third place car rolled to a stop on the grass outside Turn 9, smoke billowing from under the hood. Carver and his ailing Miata limped past, finally taking the checkered flag to score a podium finish in the GP2 class at Texas World Speedway. Podium photo, L-R: Chris Mills, Stephen Cox, Jim Rowland, Todd Carver, Brian Beasely. It was a triumph for a private, amateur team of talented drivers who spend their weekdays at regular jobs in order to live their dreams on weekends.

But the only people who saw it are the ones who were there. So gather up the family and go see a race this weekend. It doesn’t matter if it’s an oval or a road course, dirt or asphalt. Just do it! 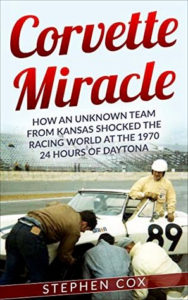 Stephen Cox is also the author of CORVETTE MIRACLE, https://www.amazon.com/Corvette-Miracle-Kansas-Shocked-Daytona-ebook/dp/B07L8HSW6H