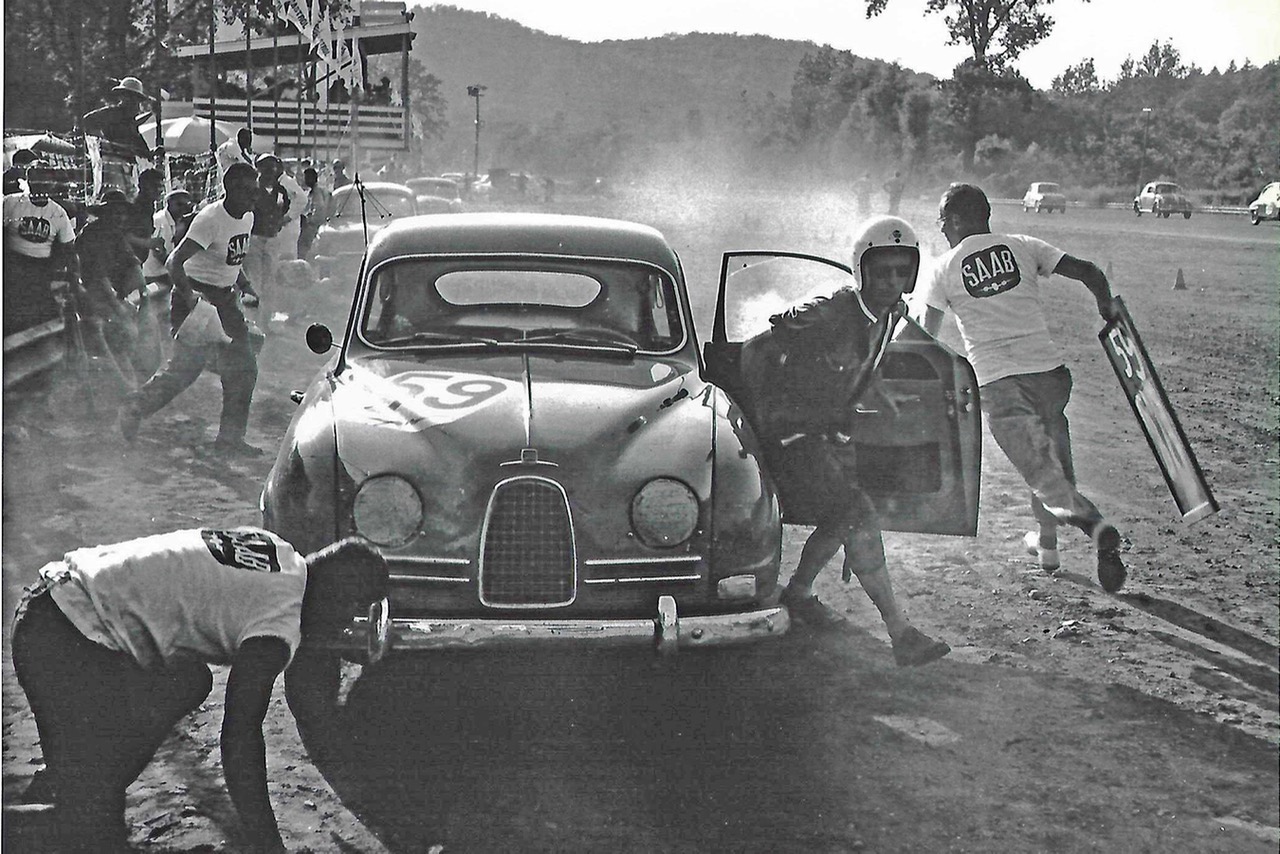 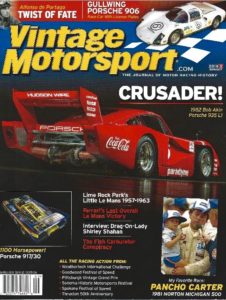 If the name Little Le Mans rings a faint bell, you are probably not alone. In its seven-year history, the races attracted strong support from manufacturers, distributors/dealers and racers themselves. Frequent CarGuyChronicles contributor Mike Matune has penned an article on the subject for the Sep/Oct issue of Vintage Motorsport magazine. In it, he focuses attention on an important saga in U.S. racing history.

This SAAB pitstop, sbove, shows the importance manufacturers placed on the Little Le Mans. Driver Bob Holbert clears the driver’s seat while a legion of uniformed crewmembers descend upon the car for servicing. Barely visible over the passenger door is an antenna for the two-way radio used to communicate between car and pit.

The 1950s were a magic time in America, as a generation came of age striving to free themselves from the misery of decades of war and economic depression. Detroit supplied their transportation in the form of ever larger, flashier, faster offerings. But there was a group of automotive consumers seeking something else. In response, a slew of foreign manufactures flooded the U.S. market with all manner of cars so very different from those to which Americans were accustomed. But the question remained, were they safe, reliable and suitable for American driving habits?

The question was answered in a series of endurance races held at Lime Rock Park in Northwest Connecticut in the late- 1950s/early-1960s. The brainchild of John Fitch, successful international racecar driver and Lime Rock’s first Director, the races were billed as contests for economy and compact sedans. They put the cars to the very test American consumers wanted. 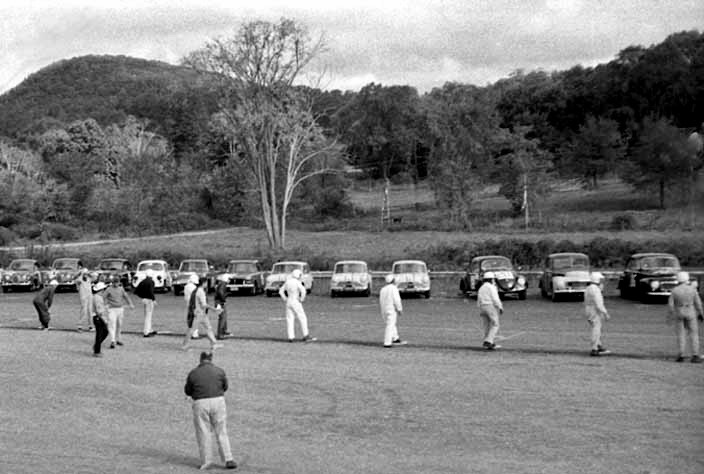 As with their French namesake, the Little Le Mans used a Le Mans start. Across the track from the drivers awaiting the start signal are a group of cars representing a number of manufacturers, some very familiar, others decidedly less so. Each driver anxious to prove his/her mettle in competition, for then as now, they lived in a “Win on Sunday, Sell on Monday” world. 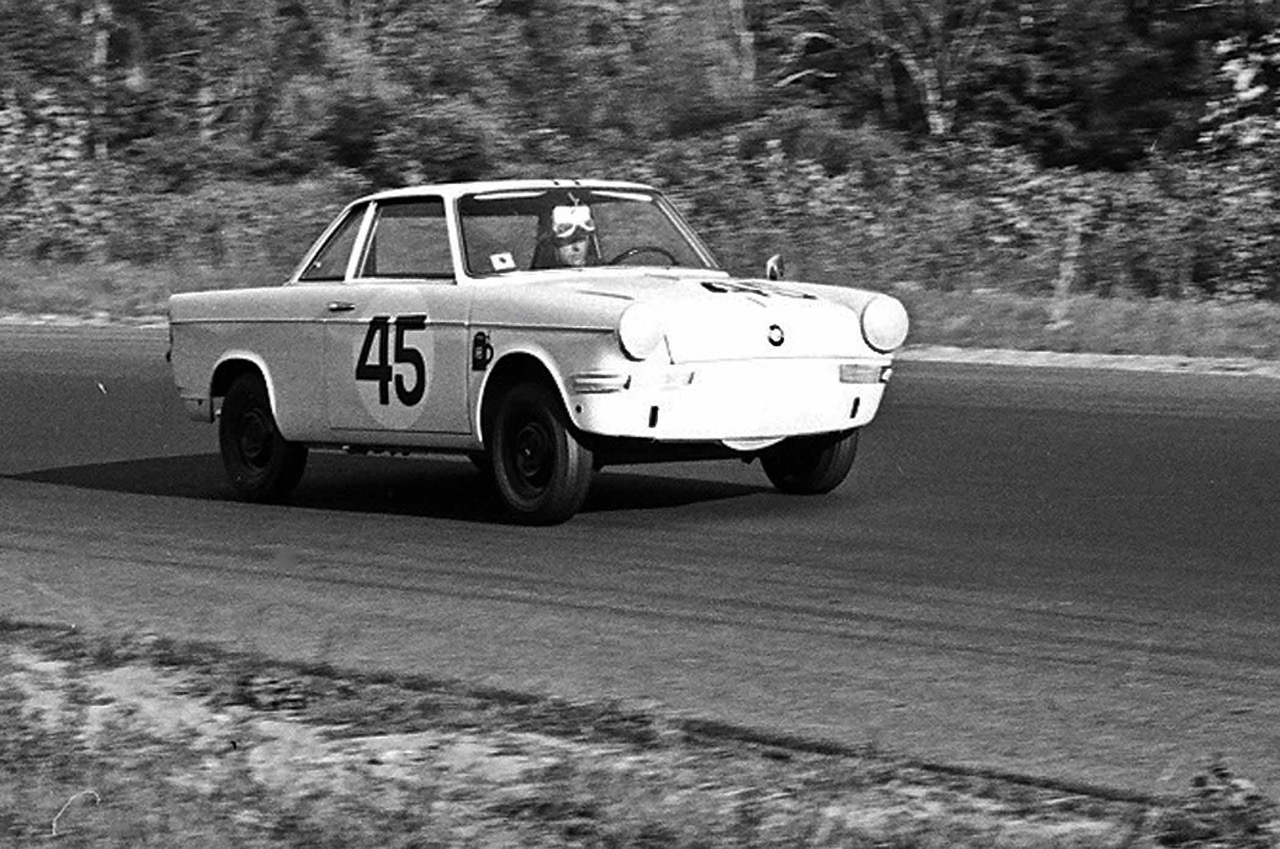 Maybe we should title this shot “BMW before BMW was cool”. Powered by a rear-mounted, flat twin engine derived from their motorcycles, the BMW 700 was a sales and marketing success. In the Little Le Mans, it became known as a giant-killer, dominating other cars with much larger engines.

For more details, please check out the Sep/Oct issue of Vintage Motorsport available on newsstands, via subscription, at  http://www.vintagemotorsport.com/  or down loaded at iTunes. You’ll be glad you did.