Maureen and Mike Matune bring us highlights from the Sully Antique Car Show, one of the oldest car shows in Virginia. 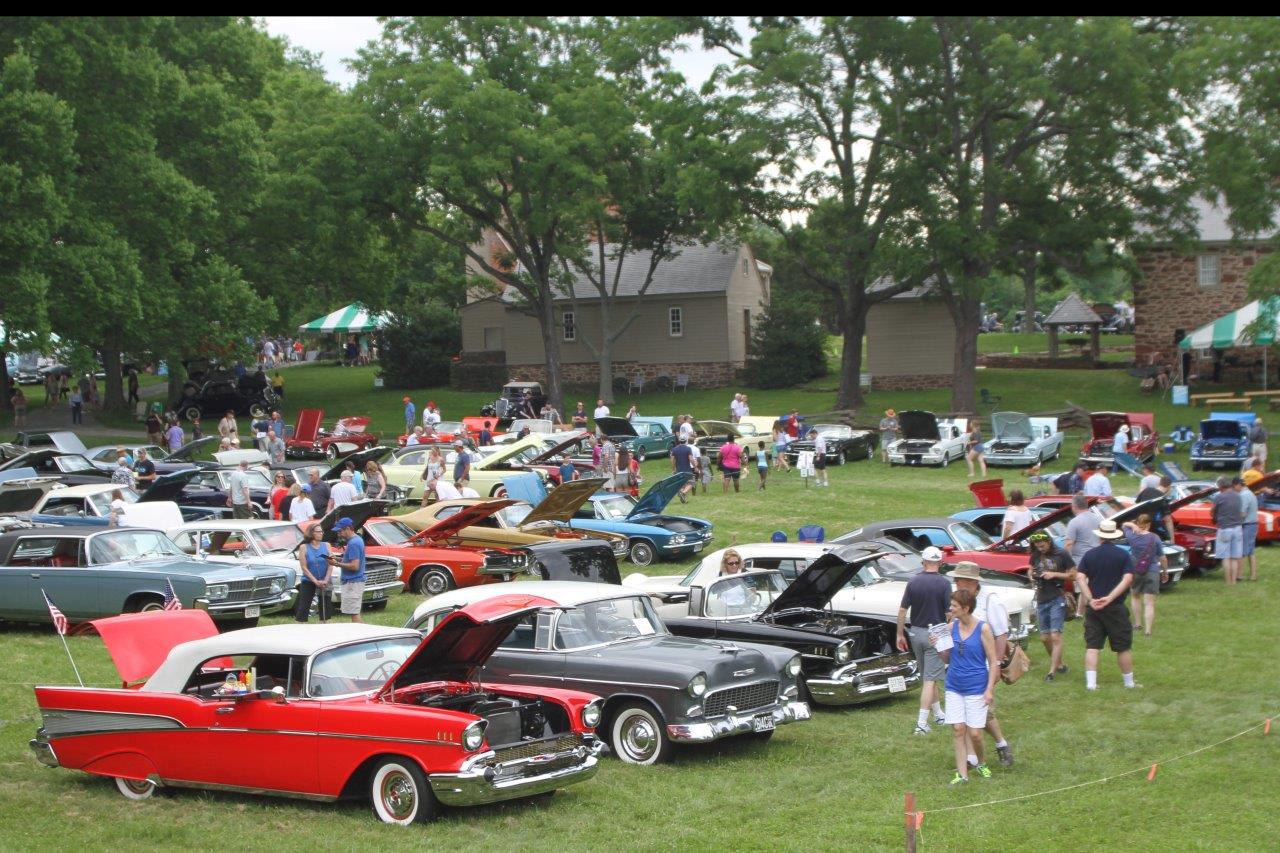 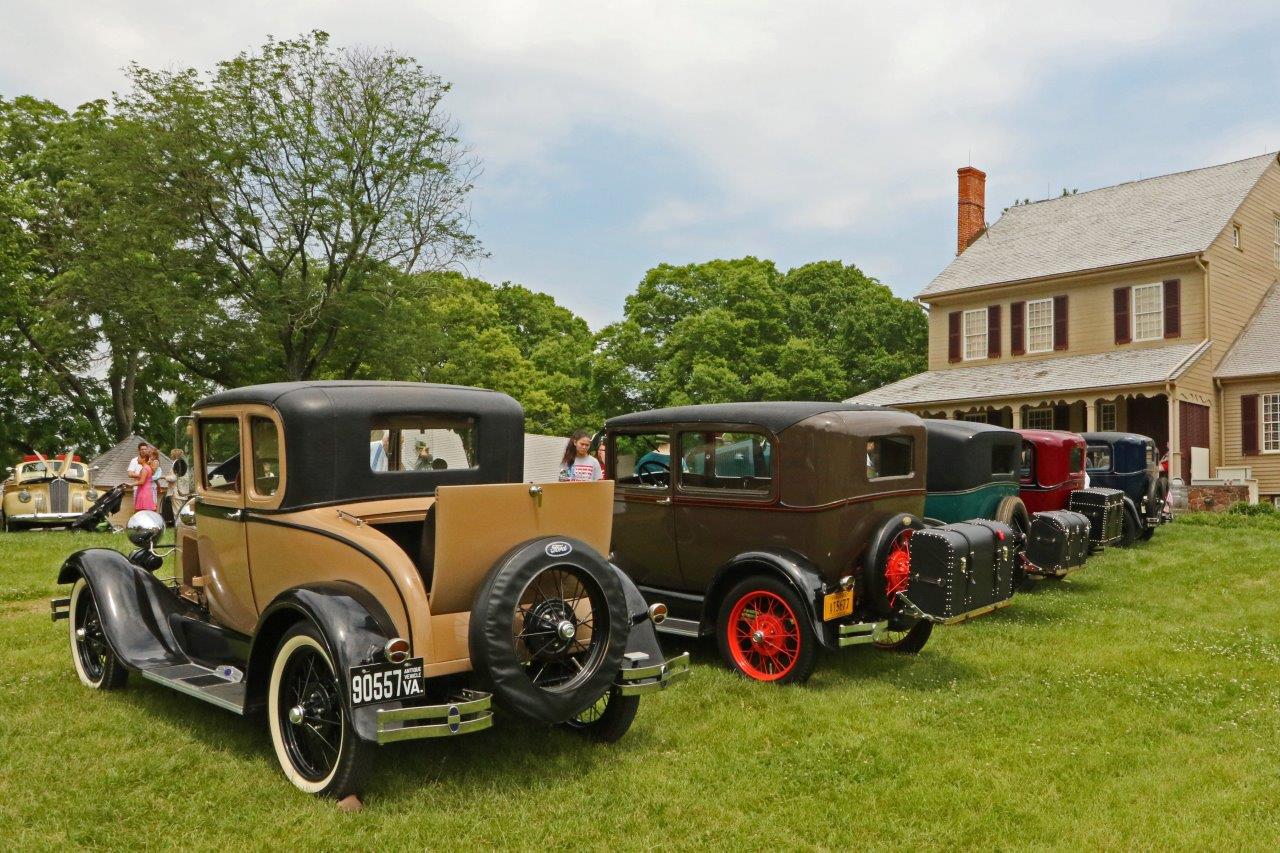 For 45 years the George Washington Chapter of the Model A Club in cooperation with the Fairfax County Park Authority (Chantilly, VA) have sponsored a car show to coincide with Father’s Day. Held on the lush green tree lined grounds of the Sully Historic Site, it features something for everyone. In addition to countless classic and antique cars, crowds are treated to antique, car and craft flea markets, a kid’s activity tent, live music, a Car Corral, plus food and tours of the historic house and grounds.

With its Fathers’ Day date and a wide range of activities and an eclectic mix of cars, the Sully Antique Car Show is a great way to while away a summer Sunday afternoon. Conveniently on Route 28 just across from Dulles International Airport, the show is one to see. 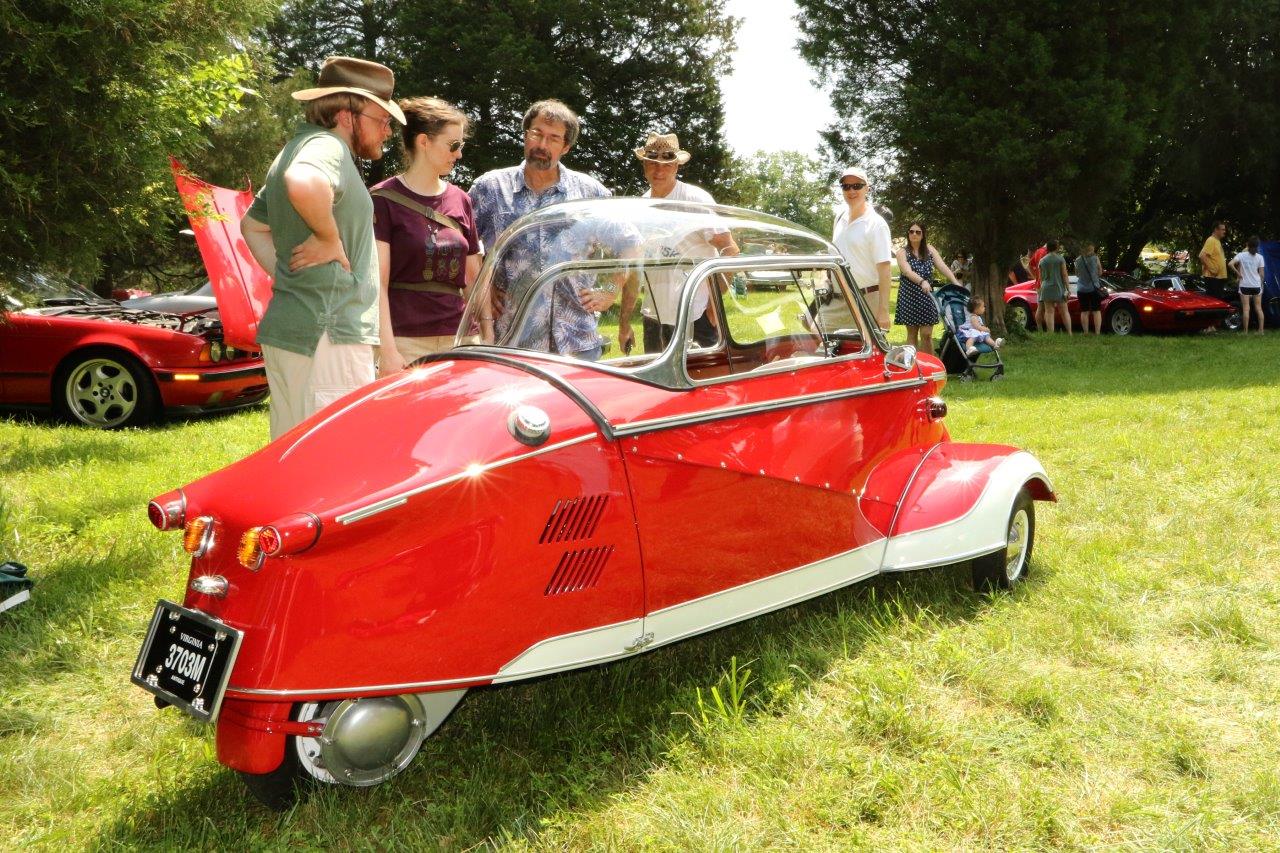 A Father’s Day car show means a lot of fathers with families feigning interest in tow. One such duo resulted in the line of the show. A disinterested teenage girl said to her fully engrossed Dad as they gazed upon Larry Bell’s ‘55 Messerschmitt, “What’s this Dad, an ancient Smart Car?” 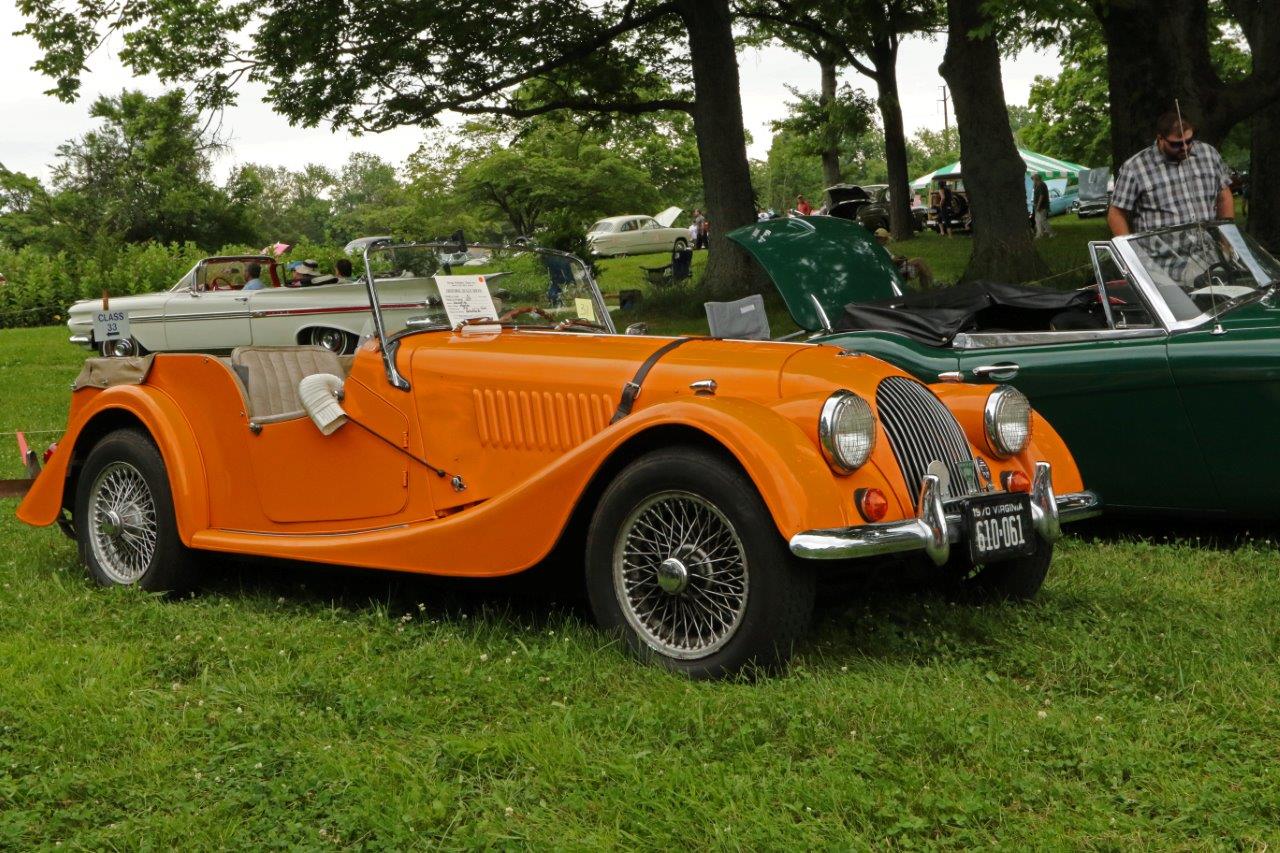 Driving a classic sportscar like Don White’s ‘70 Morgan on a hot Virginia June day requires a certain amount of ingenuity. If you look closely at the passenger door, you can see a system fashioned from pieces of a rain spout to scoop outside air and direct it into the passenger’s footwell, adding a modicum of creature comfort. 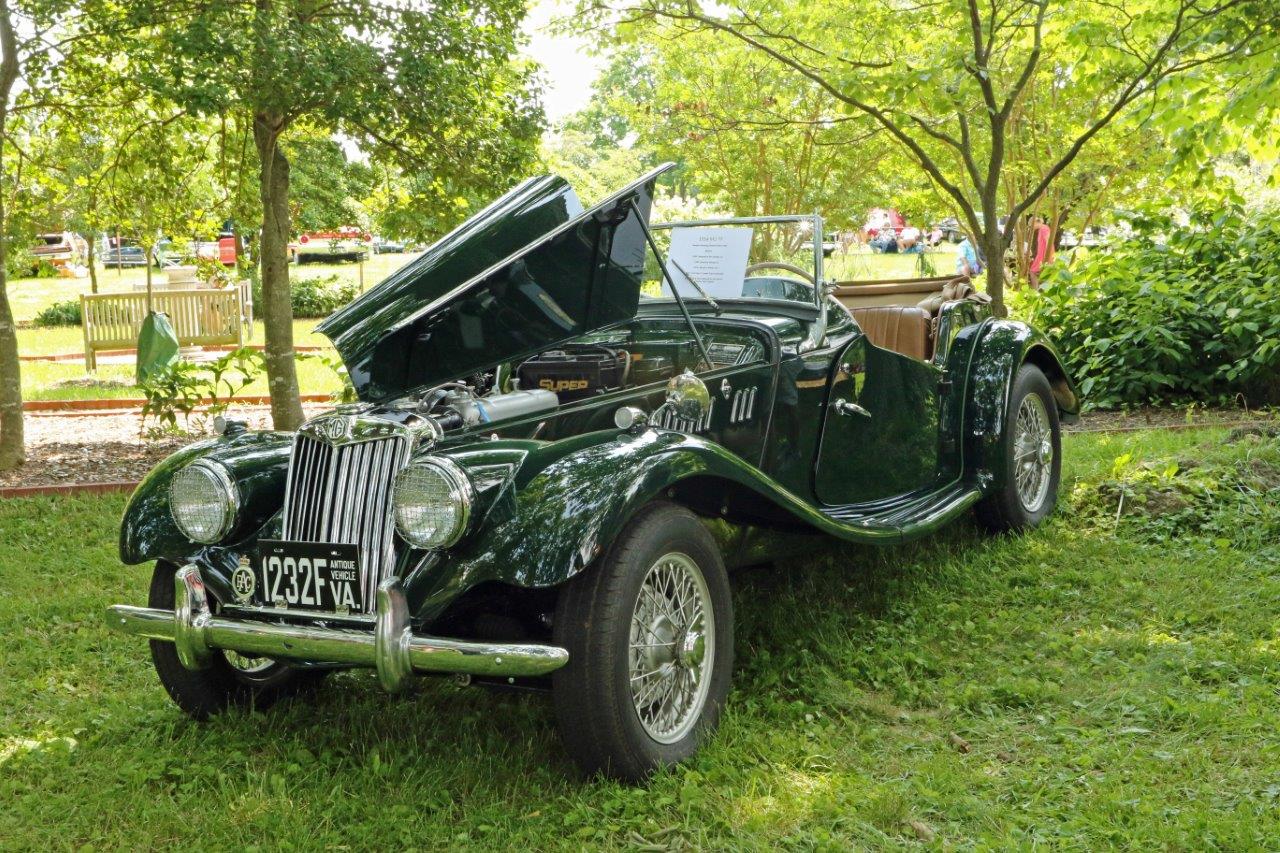 Before launching its MGA sportscar with its more modern all-enveloping bodywork, MG gave the separate fender idiom one last try with its TF. Styling was updated with use of a sloping grille, a separate radiator and faired-in headlights. They would produce these for only about two years. This outstanding example belongs to Dick Barcus. 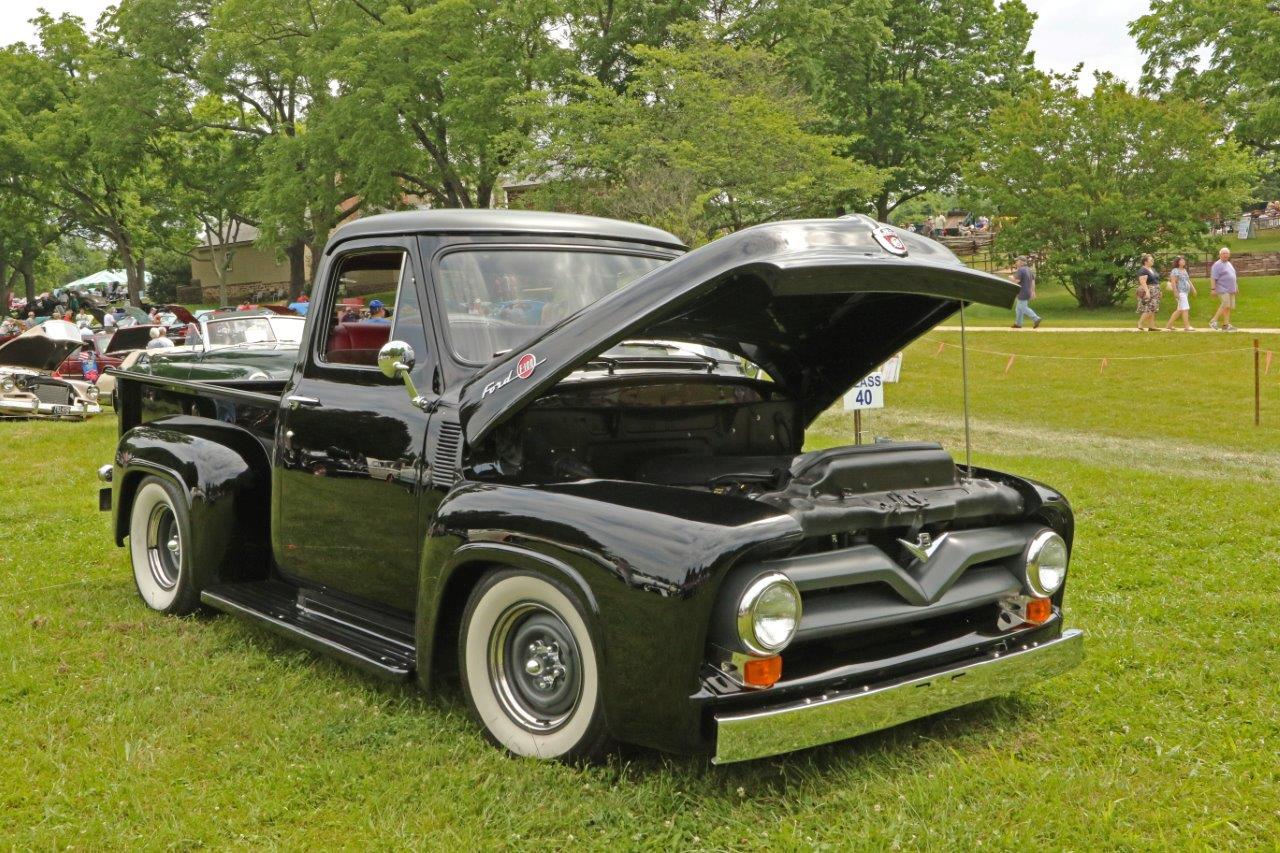 The exterior of this Ford F100 portrays some well-done period touches including wide whitewalls, painted “Steelies” with chrome “Spiders” and lug nuts. All of this combined with just the right stance and impeccable bodywork and paint leads one to think of it as a very traditional build. That is until you pop the hood and find a Ford DOHC Ford Coyote! 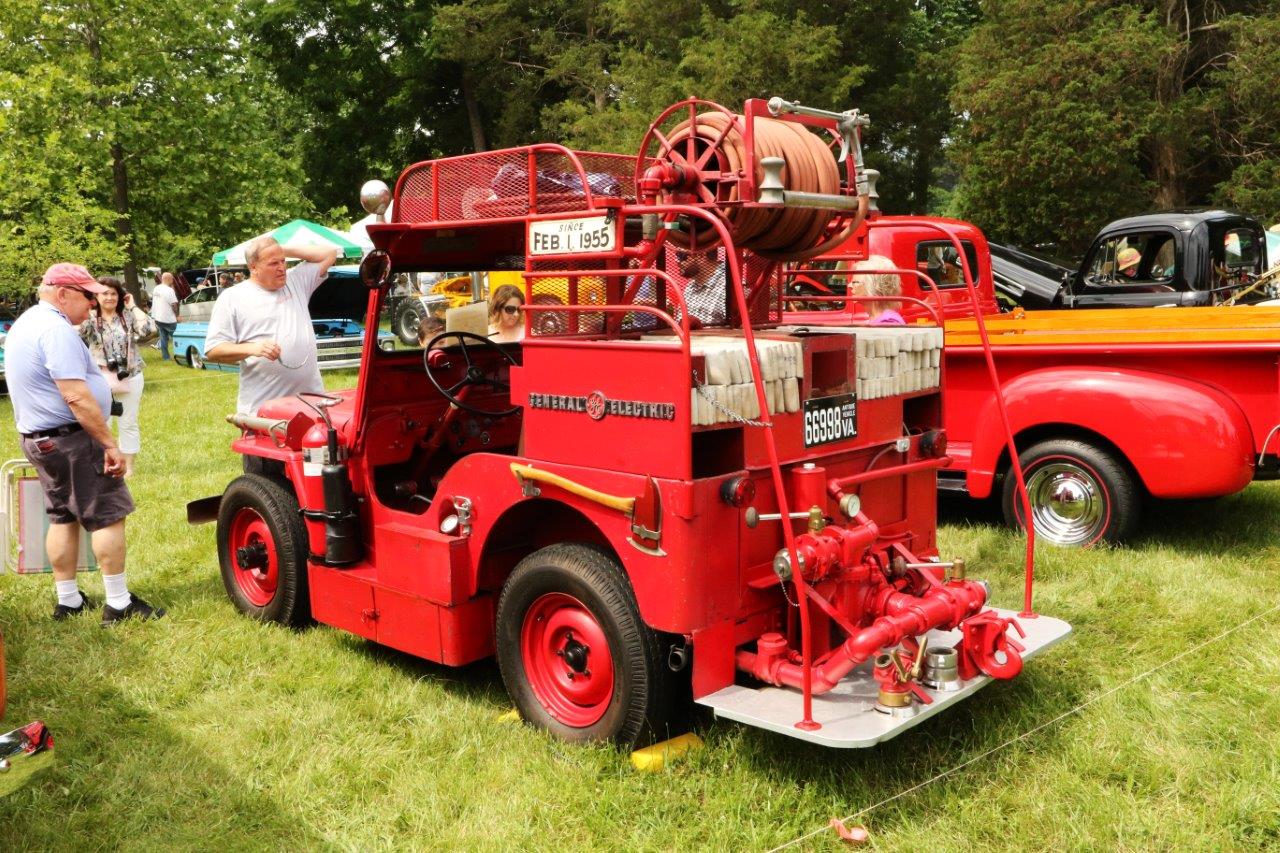 In the early-1950s, industrial giant General Electric, decentralized their manufacturing facilities and located some of their controls business to Waynesboro, VA on the site of an idled airport. The new facility needed fire protection, so GE bought a Willys Jeep and had employees turn it into this fire engine. Still functional today, it was a very pragmatic solution to a real need. 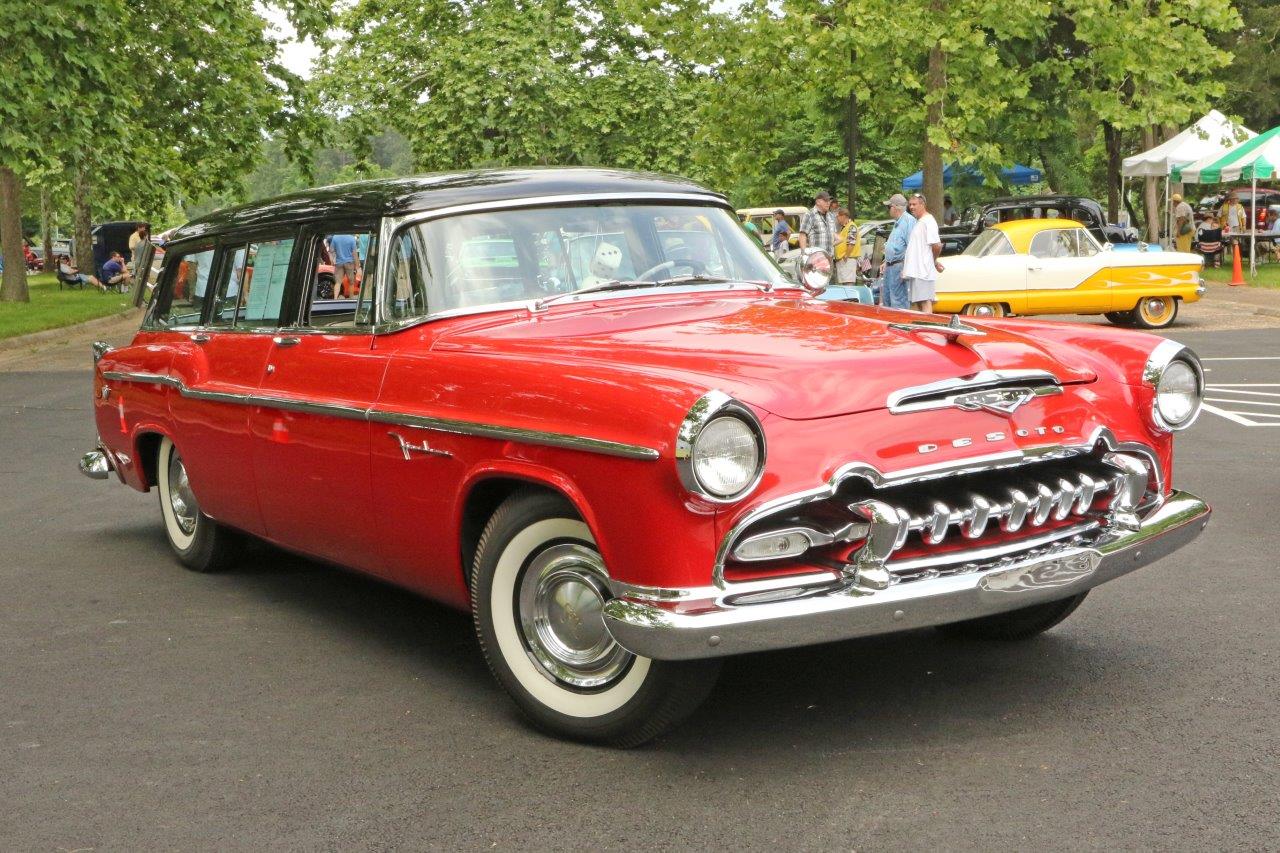 The defunct DeSoto brand represented Chrysler Corporation’s attempt to slot a line between its top-of-the-line Chryslers and its more plebeian Dodge nameplate. After reaching peak sales in the range of 110,000 units in 1955, it fell into decline, its demise coming with the 1961 model year. This one once occupied a spot in actor Dan Aykroyd’s collection. He even signed the dash complete with a caricature of his Conehead character. Aykroyd’s wrote, “Excellent Earth Crawler 1955, Baldar”. 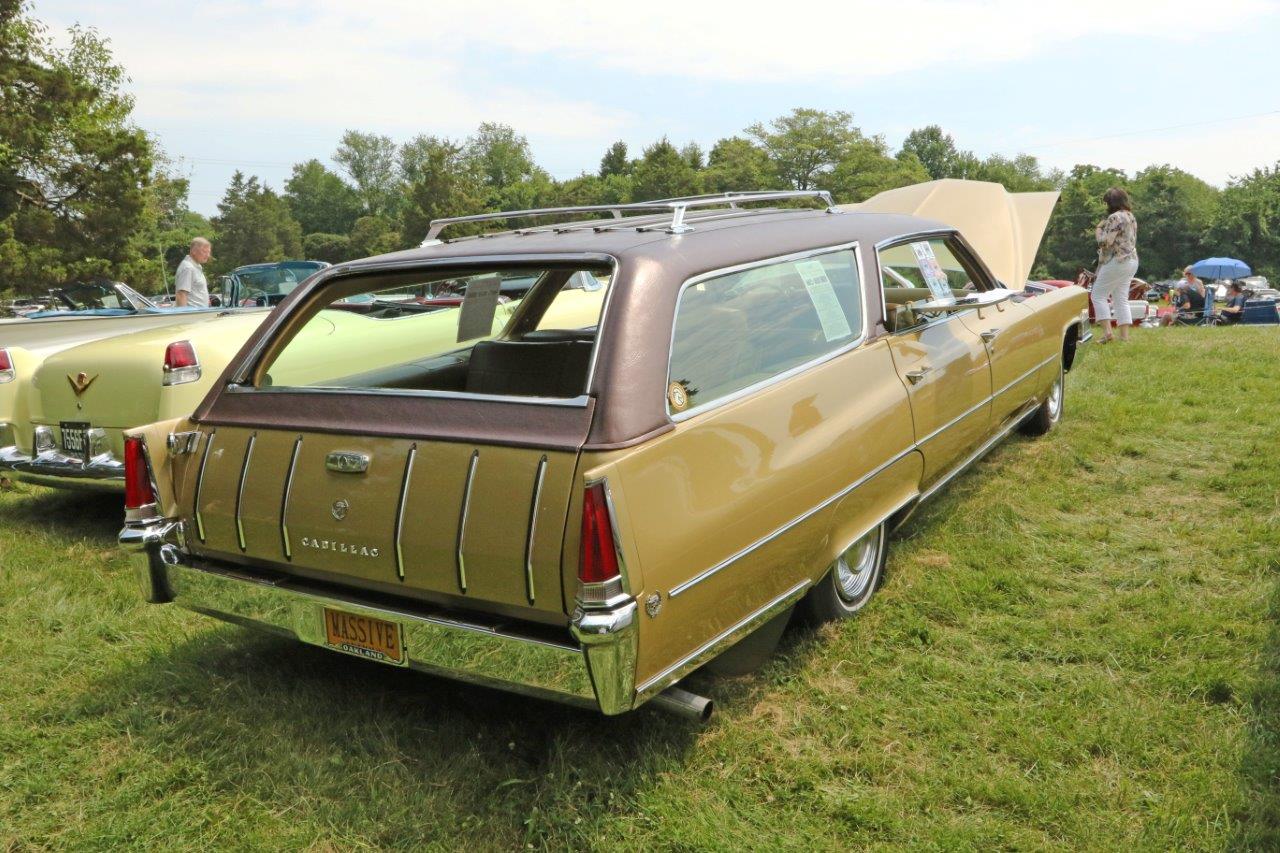 Cadillac station wagons are hardly a common sight. Most are the result of a few coachbuilders. The Sevila family’s ‘69 Cadillac Fleetwood wagon is no exception. It is thought to be one of a handful built to transport VIPs at that year’s Indy 500. It was sold afterwards and spent time in California before it was shipped east and restored. As one would expect of a top-of-the-line Cadillac of the era, this one is fully loaded with every option imaginable. 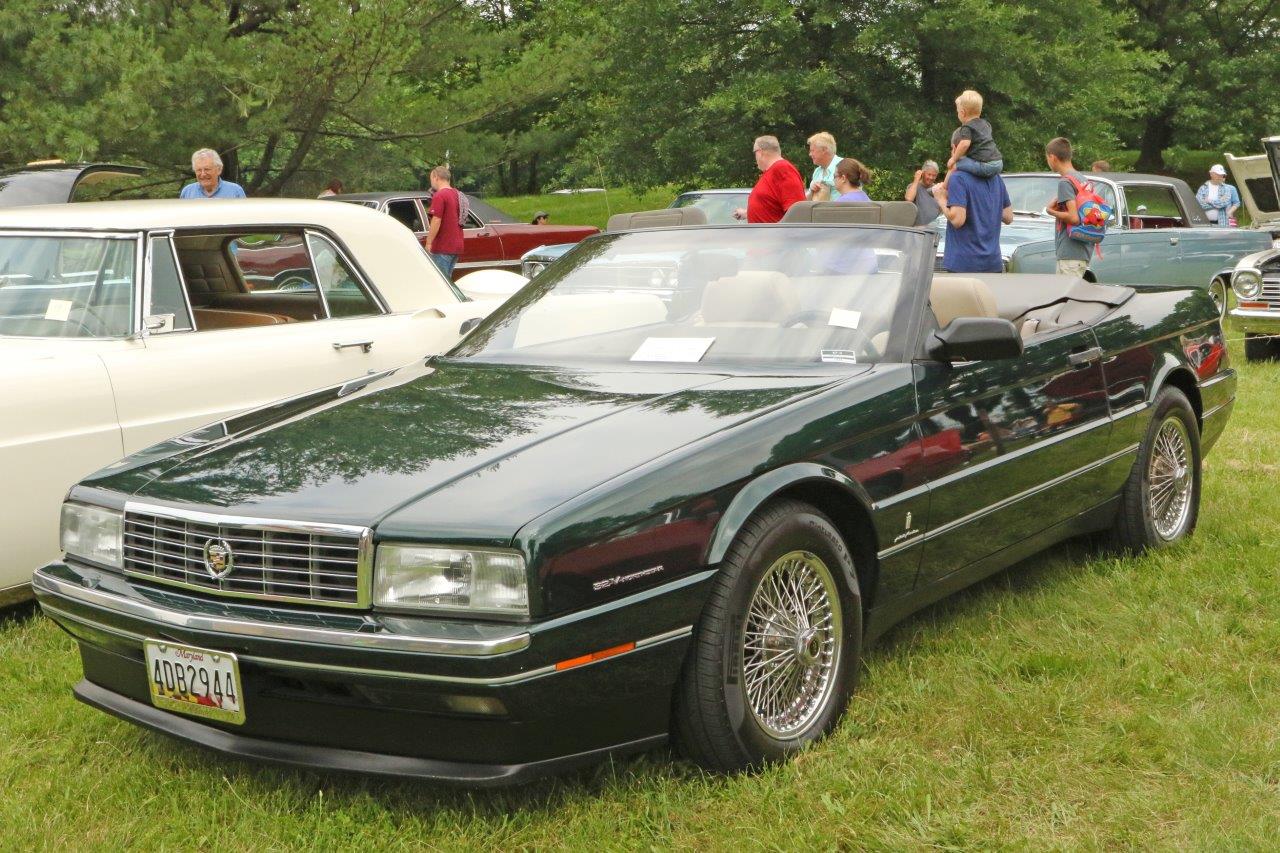 The Allanté was Cadillac’s attempt to break into the luxury two-seat sporty car market (think Mercedes SL and Jaguar XJS). The FWD cars were filled with every luxury option available at the time. Bodies were constructed in Italy by Pininfarina, then flown to Detroit, aboard special 747s, where the cars were completed at GM’s Hamtramck plant. All of this effort failed to excite the market and total production over its seven-year life totaled around 21,000 units. Thanks to Bob Shannon for preserving and showing his ‘93 Allanté. 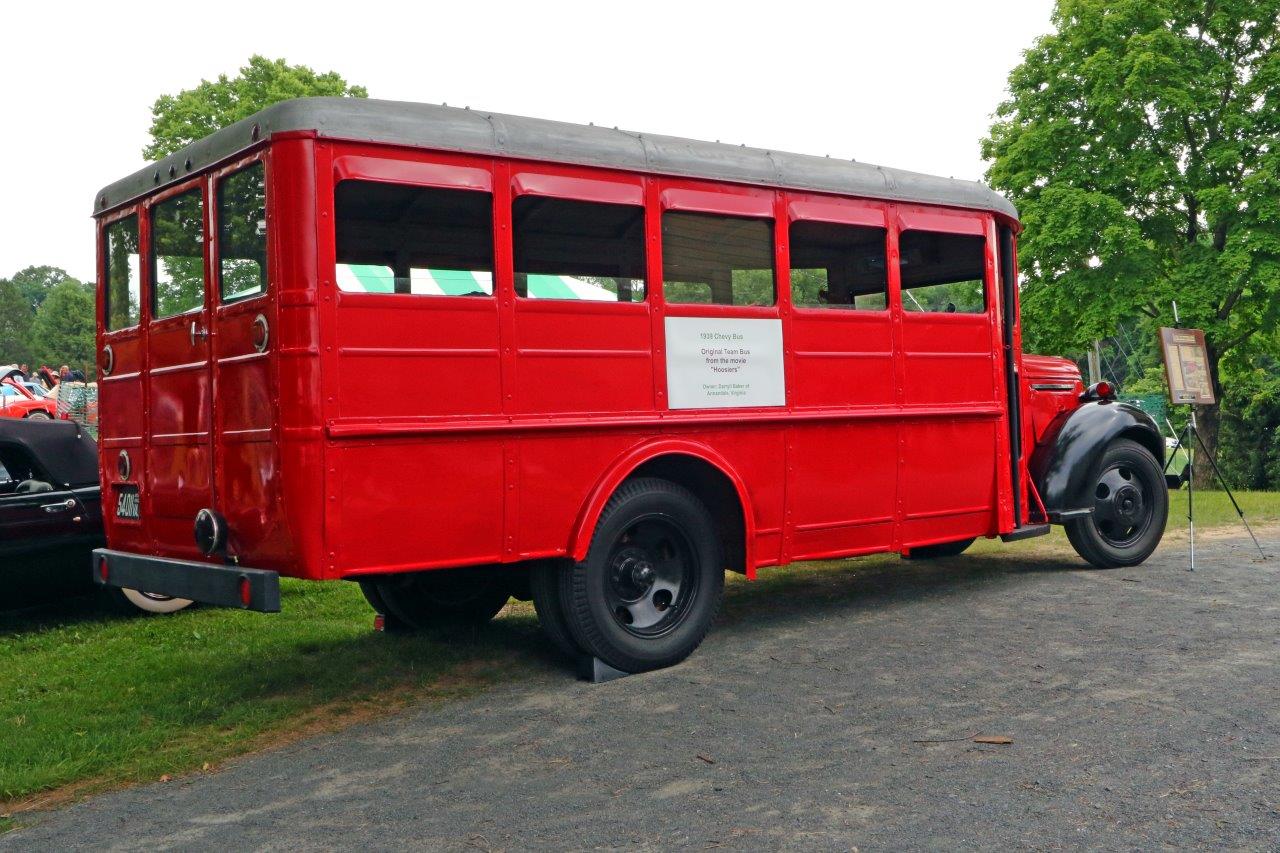 There are two stories behind Darryll Baker’s ‘39 Chevrolet School Bus. The first deals with its use in the 1986 Gene Hackman film Hoosiers where it transports the fictional Hickory, IN Huskers through their basketball season and all the way to the Indiana State Championship. Secondly, it is a constant thread in the Baker family, whose ownership of the bus stretches back from Darryll three generations and forward to a couple more. Along the way it functioned as an early RV and took the family on extensive trips through the US.

For more information about the George Washington Chapter of the Model A Club and its events, please visithttp://www.gwcmodela.com/events.asp