Skip to content
Jaguar gives us a sneak-peak into its future. And it’s electric, blogs Road Test Editor Howard Walker. 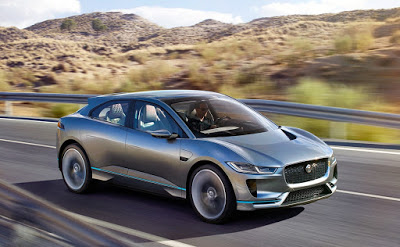 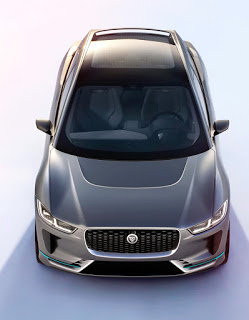 The undisputed star of this week’s Los Angeles auto show is an all-new, all-electric performance crossover from Jaguar, called I-Pace.

While its official title is I-Pace Concept, this sleek, head-turning five-seater is essentially the same car that will hit the streets in a couple of years, priced – and we’re guessing here – from around $60,000.

Despite the badge and its five seats, this new I-Pace shares zip, zero, nada with Jaguar’s recently launched F-Pace SUV. The entire car has been developed from a clean sheet of paper, using some very cool battery technology and featuring dramatic, so-called “cab-forward” styling. 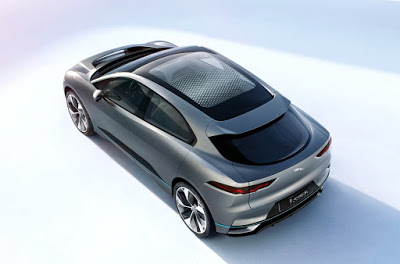 What Jaguar’s electrification gurus have done is develop in-house a battery pack featuring 36 liquid-cooled lithium-ion cells. These provide the juice to amp-up two 200-horsepower electric motors – one for each axle – making the I-Pace an all-wheel driver.

With a total output of 400 horsepower and 516 pound-feet of torque – pretty much the same torque as Jag’s insanely-rapid F-Type SVR sports car – the I-Pace should be super-quick. How quick? Jaguar talks of 0-to-60 mph sprinting in just 4.0 seconds. That’s fast.

How far will it go on a single charge? Jaguar talks about a range of around 220 miles, though plug it into a public 50kW DC charging outlet and you’ll get a 80 percent charge in 90 minutes and a full 100 percent charge in just over two hours. 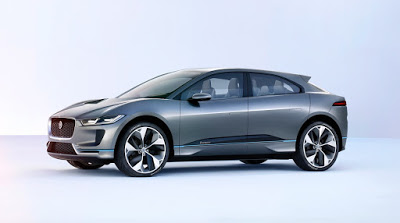 The beauty of Jaguar’s -super thin battery pack is that is can be mounted low in the vehicle between the front and rear axles. That means a super-low center of gravity, which should ensure sports-car-like handling agility and low-roll cornering.

Of course having the electric motors mounted on the axles and the battery pack buried beneath the passenger compartment, means that you don’t need the space under the hood for an internal combustion engine. That allowed Jag’s design team to push the base of the windshield and the two front seats well forward to create much more interior space. Rear seat kneeroom, in particular, is huge. 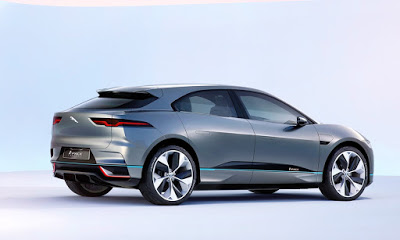 And if that dramatic front-end styling with its towering front haunches, looks kinda familiar, it’s because the shape and proportions were inspired by Jaguar’s gorgeous C-X75 hybrid-electric Supercar concept that debuted in 2010. This was the car driven in that crazy car chase through Rome by the baddie in the James 007 Bond flick, Spectre.

The rest of the car is equally dramatic, from its stretched wheelbase – dictated by the long battery pack – to the squared-off rear, full-length glass panoramic roof, and head-turning LED lighting. We’re hoping the concept’s humongous 23-inch alloys stay for production, though the F-Pace’s available 22s would work just fine. 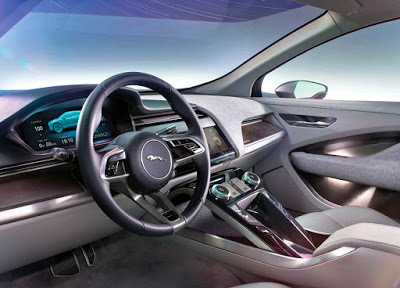 Inside, the focus is on a clean, modern, uncluttered look with lots of stark, unvarnished walnut veneers and metal inserts. The dashboard features a virtual instrument cluster along with two large, tablet-style glass touch-screens on the center console. There’s seating for five, with the rear passengers enjoying the kind of legroom reserved for bigger, Escalade-sized SUVs. 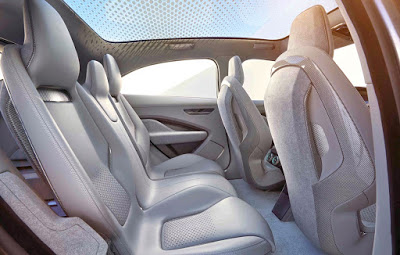 This is, without doubt, a breakthrough vehicle for Jaguar; the first of a fleet of upcoming electric Jags. It’s the first to throw down the gauntlet to Tesla and future rivals from Mercedes and Audi. 2018 can’t come soon enough!