When it came to exhibition drag racing, the biggest crowd-pleaser was E.J. POTTER: MICHIGAN MADMAN V-8 MOTORCYCLES. Nobody and no motorcycle did it better than the maximum motorhead from Ithaca, MI! 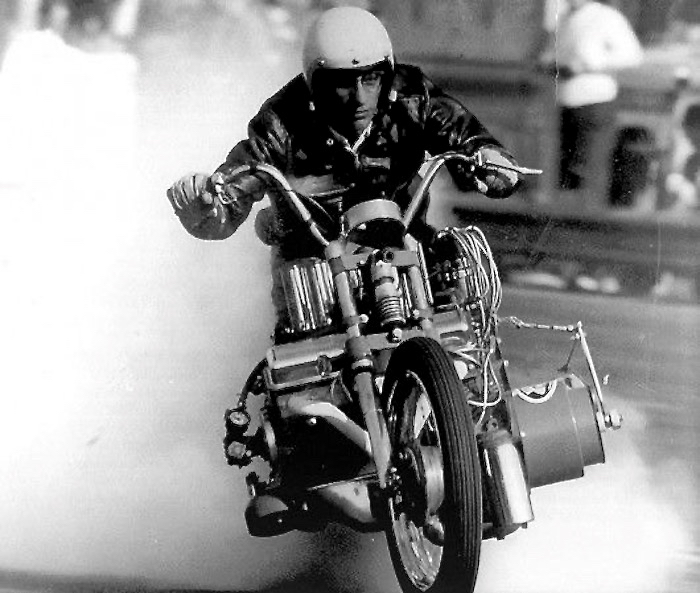 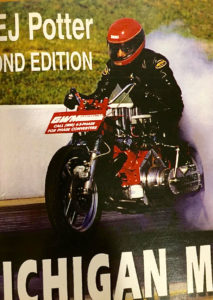 Growing up, young E.J. Potter proved to be an inventive and daring motor-head. The teenage Potter was stuck with a crazy idea, one that was unheard of – drop a V-8 engine in a Harley-Davidson motorcycle. He was already tinkering with tractor engines on the farm, building motorcycles and racing at the local tracks and drag strips around central Michigan well before he was old enough to legally drive. Potter shared this radical V-8 powered motorcycle concept with a few of his high school buddies who thought he was crazy. Their disbelief and ribbing only served to fuel Potter to make it a reality– and his legendary 283-inch Chevy-powered Bloody Mary beast was born in the late 1950s. Potter was just 19 years old when he designed and built the bike.

At that time, no one had ever married a V-8 with a motorcycle. E.J. Potter powered through daunting technical problems that would’ve deter most – extreme vibration, unpredictable steering, the front wheel taking flight and popping up in the air. He debuted the Bloody Mary at a local strip in 1960, reaching 130 mph.