Skip to content
The Ford vs. Ferrari battle was rekindled at Le Mans exactly 50 years on from Ford’s 1-2-3 overall victory in 1966. 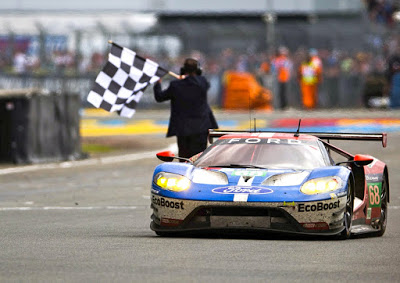 The No. 68 Ford GT of Sébastien Bourdais (FRA), Joey Hand (US) and Dirk Müller (GER) crossed the finish line at Le Mans at three o’clock today, as the overall GT winner of the 2016 Le Mans 24 Hours. The No. 69 Ford GT of Ryan Briscoe (AUS), Scott Dixon (NZ) and Richard Westbrook (GB) joined the winners on the podium after scoring third place. The Nos. 66 and 67 Ford GTs finished in fourth and ninth places, respectively.

“This is an historic moment for the Ford Motor Company,” said Bill Ford, executive chairman, Ford Motor Company. “We dared to dream that we could return to Le Mans, 50 years after the incredible 1966 win, below, and take on the toughest competition in the world. The pride we all felt when the Ford GT crossed the line at Le Mans is indescribable.  The team that designed, built and raced the Ford GT has worked tirelessly to bring us to this result and I am proud of each and every one of them. The Ford Chip Ganassi Racing team demonstrated the spirit of Ford, that of innovation, determination and true teamwork.  We cherish our history and heritage, but today we made history again and I couldn’t be more proud.”

First unveiled to the media at Le Mans last year, the Ford GT’s Le Mans victory comes 395 days after the car turned a wheel for the first time on May 20, 2015, at Calabogie Motorsports Park in Canada. A Herculean effort from the Ford Chip Ganassi team has transformed the car into a Le Mans winner in just over one year.

“Building a new car and racing it at Le Mans is a monumental task,” commented Mark Fields, president and chief executive officer, Ford Motor Company. “We took it on and we conquered the biggest challenge in sportscar racing: the Le Mans 24 Hours. It has been incredible to share this event with our dealers, owners, employees, sponsors and guests who are all bursting with pride at being part of the Ford family. Every manufacturer in the GTE Pro class fought with everything they had in the best competitive spirit, and we are thrilled to have played our part in this incredible race.”