From grounds of the historic home of Matilda Dodge Wilson to the fairways at The Inn at St. John’s, once a year special cars are the stars. 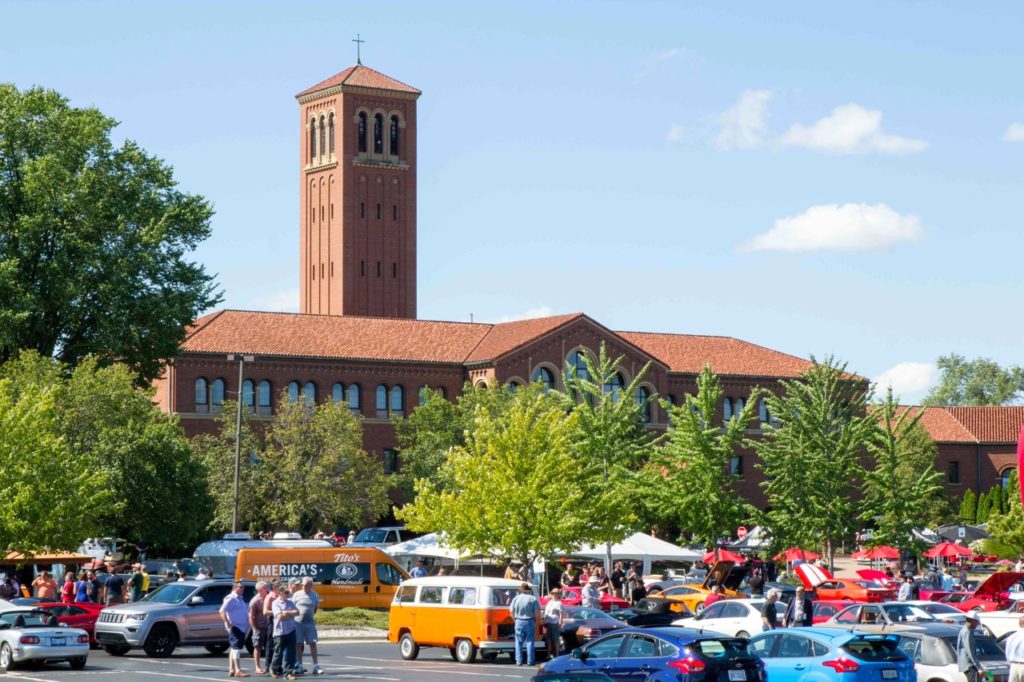 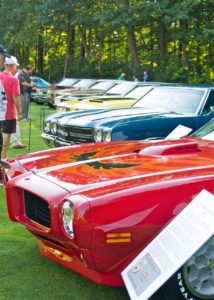 There is nothing staid about the Concours d’Elegance of America, now in it’s 39th year. The groupings of exhibitors change to reflect new interests each year, but the cars at the exhibition never cease to amaze. There are events, dinners and drives before the show, but the majority of the action takes place at the Inn at St. John’s, above, on Saturday and Sunday. This year Saturday was filled with educational seminars to fit most interests, a laid back Cars & Coffee, and the tongue-in-cheek Concourse d’Lemons. Sunday was when the by-invitation-only automobiles and selected motorcycles were the stars. This is the first of three years Chevrolet has agreed to sponsor the event, bringing more Detroit “Made in the USA” pride to the community.

The Muscle Cars-Maximum Muscle 1963-1973 group contains some of the show’s favorites. Here a ‘73 Buccaneer Red Pontiac Trans-Am with a “screaming chicken” on the hood, right, precedes a ‘70 Chevy Chevelle SS. 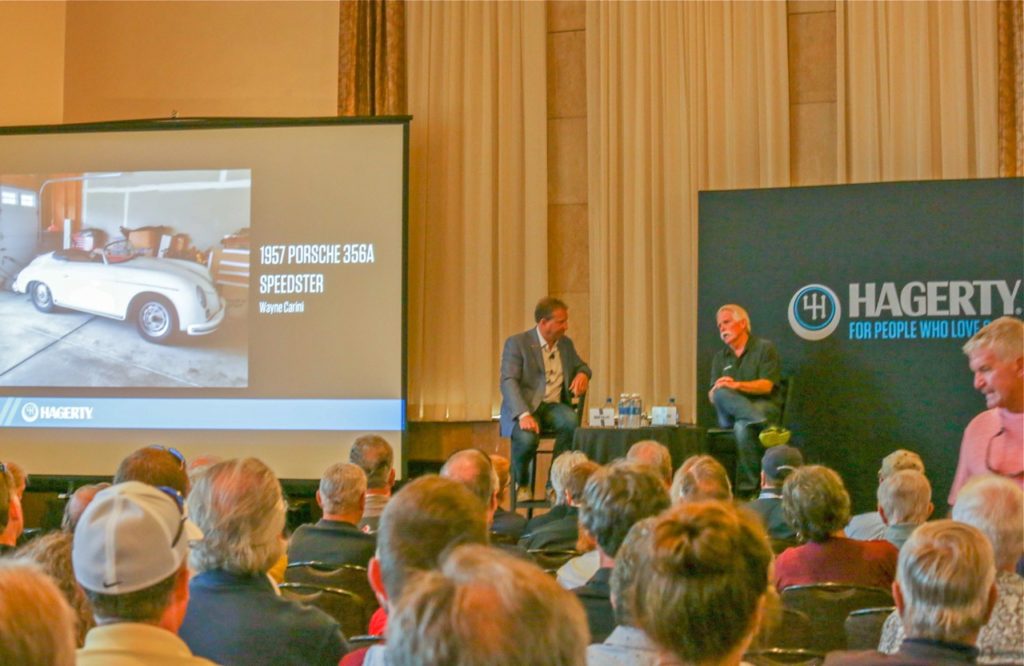 Wayne Carini spoke about “barn finds” to a packed house. He fielded questions from an audience that wanted to know about unusual, rare and downright odd cars he has encountered.

The Keller Collection, featuring Aerodynamic Coupes (1932-1938) from four European countries and the U.S. line up to make their entrance into the Grand Ballroom for the last seminar of the Saturday. It is the first time all five automobiles have been seen together outside of the Keller’s private collection. On Sunday they were shown to the public in their own section. Arturo and Deborah Keller were also named Collectors of the Year. 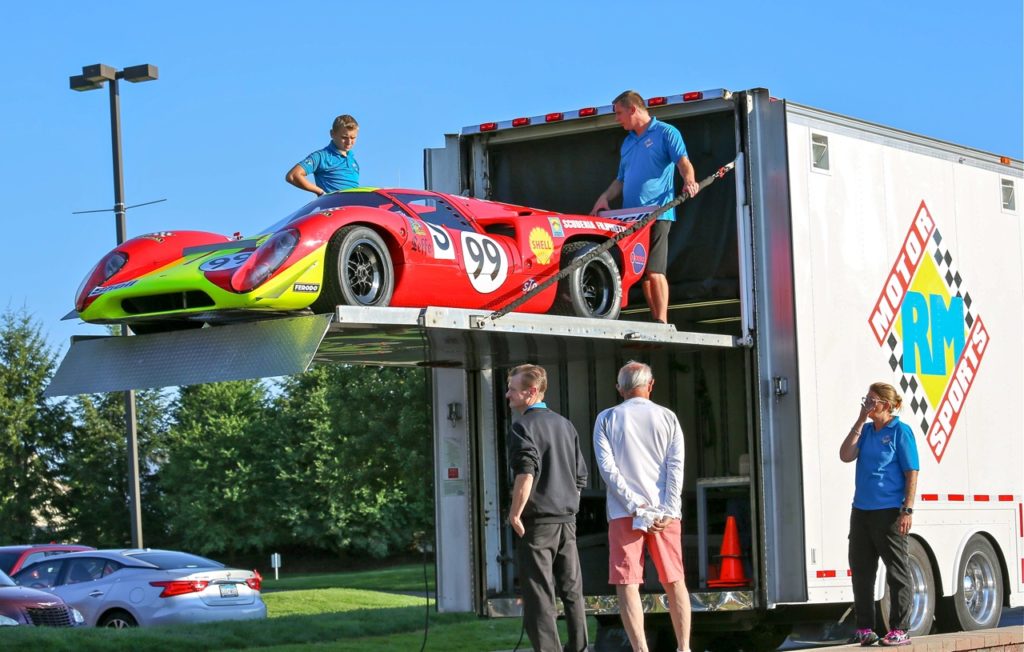 The opening of each trailer is a surprise. You never know what will be inside, although you have a good idea of how this one will sound driving onto the show field. This trailer is ready to populate the Can-Am Challenge Cup group. 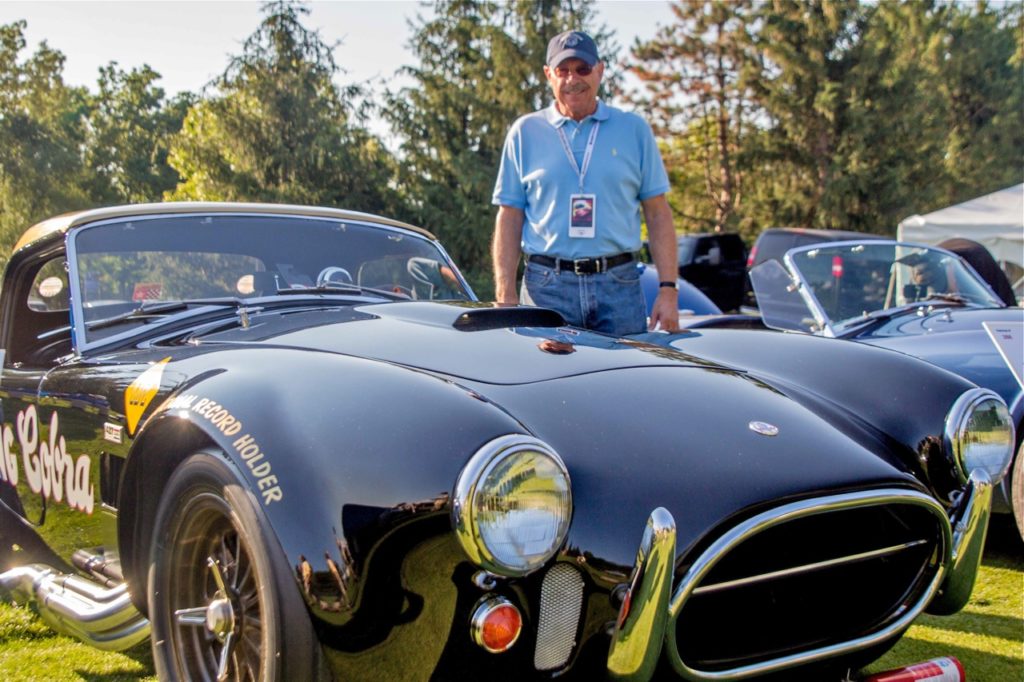 There were 15 cars in the Cobra section ranging from 1963 to 1969. According to owner Irwin Kroiz, this ‘66 Shelby Cobra CSX 3159 roadster is unique. Motion Performance’s Joel Rosen modified the King Cobra for drag racing and drove it to the NHRA AA/SP National Record (10.67-second elapsed time) and went on to set NASCAR records. 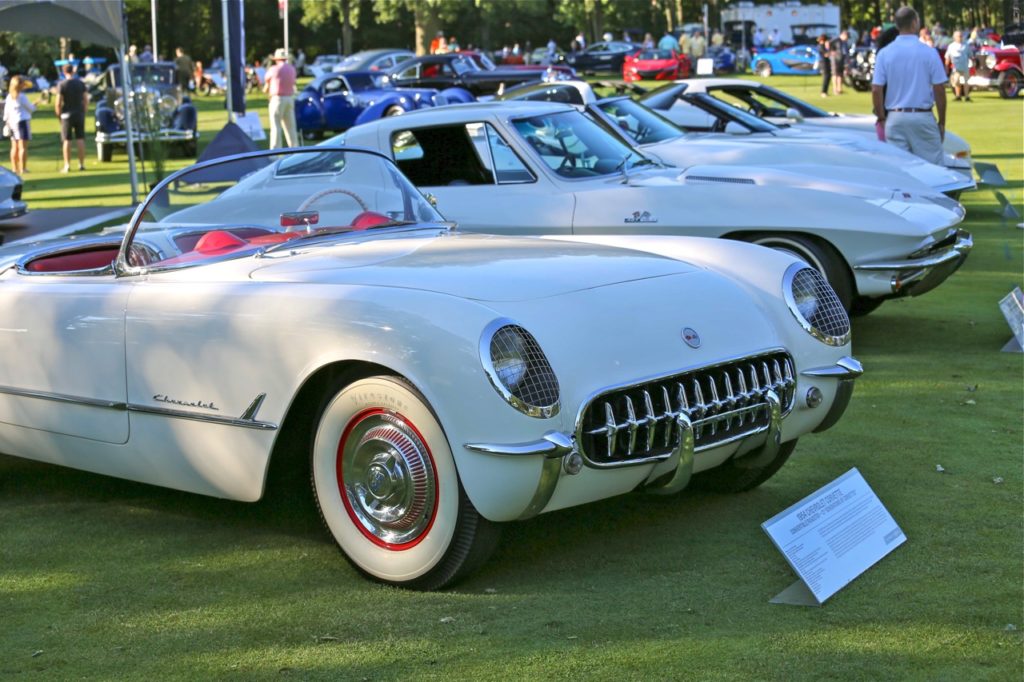 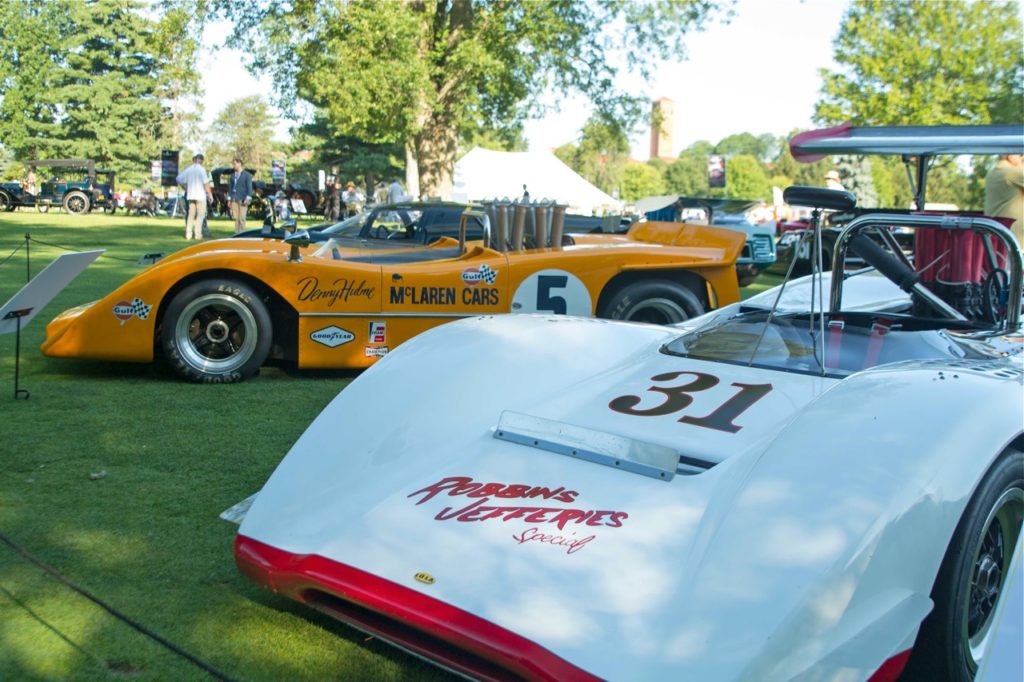 These two cars are parked in the shade, with their racing pedigrees stamped clearly in their livery and form. The Robbins-Jefferies car ran eight of 11 Can-Am races in 1969 and, according to the owner, is one of the most well-known Lola’s in existence. It was not always so for the ‘68 McLaren. Like it’s neighbor it also had an incredible race history to start. But then, though a series of transactions, it ended up almost buried in a farmer’s field in South Auckland. Now, with a full restoration, it is safely on the show field and ready to race. 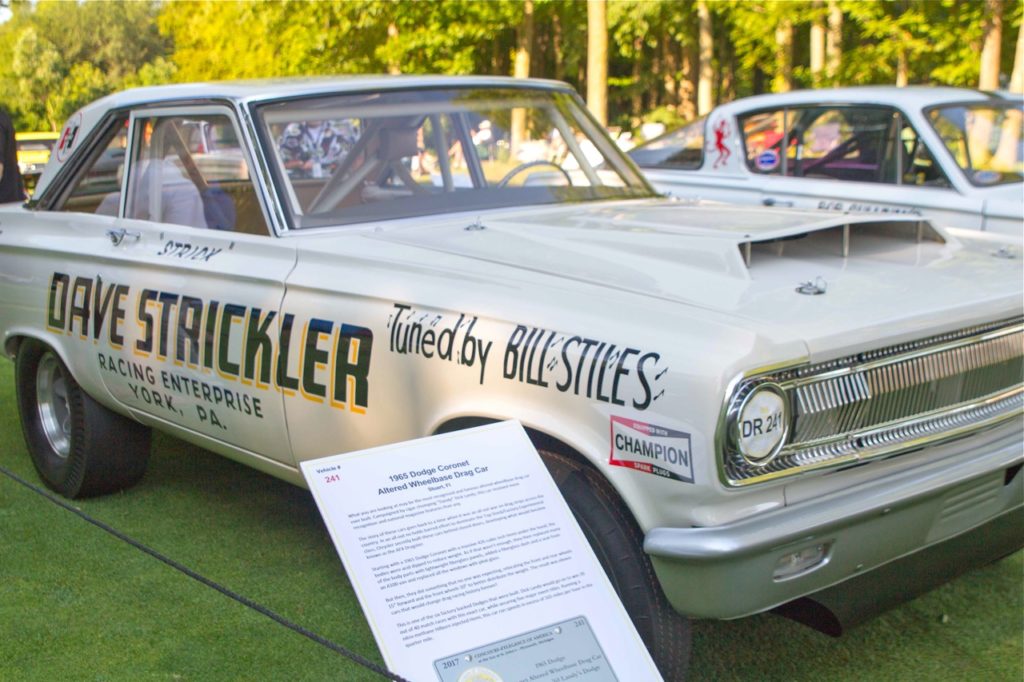 Attendees would drift from Muscle Cars to Drag Cars, as they were located across from each other. Dave Strickler’s altered wheelbase ’65 Dodge 426 Coronet attracted a lot of attention. Strickler won 39 of 40 match races one season. 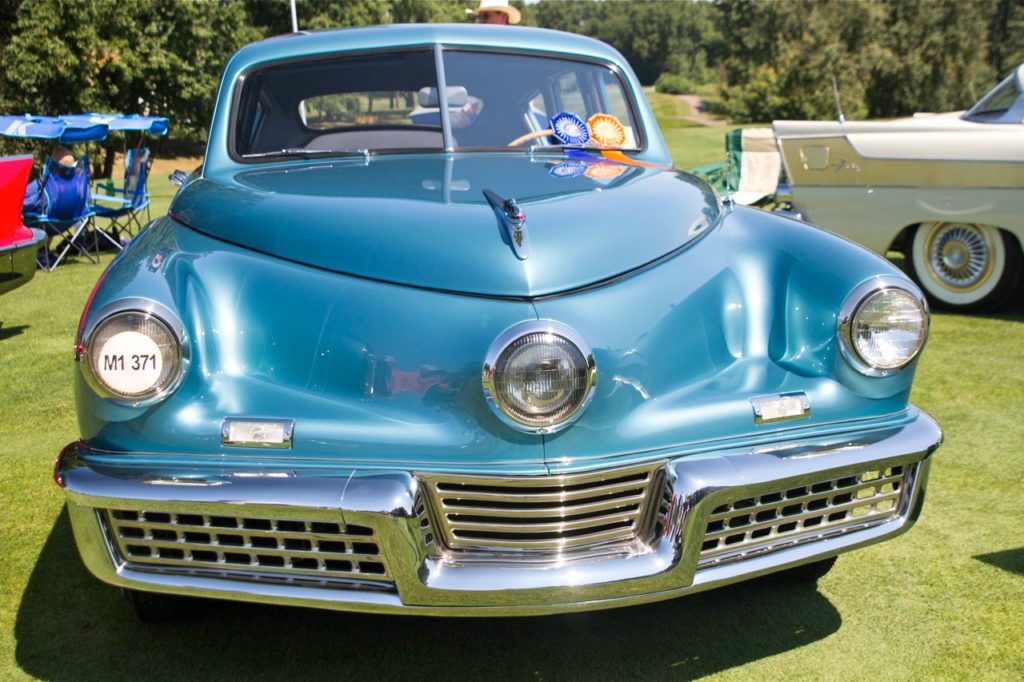 In the American Post-War Closed class and surrounded by Buick, Dodge, Pontiac and Packard this car was easy to walk past. The center headlight was a sure give-away that a rare ‘48 Tucker was in the group. 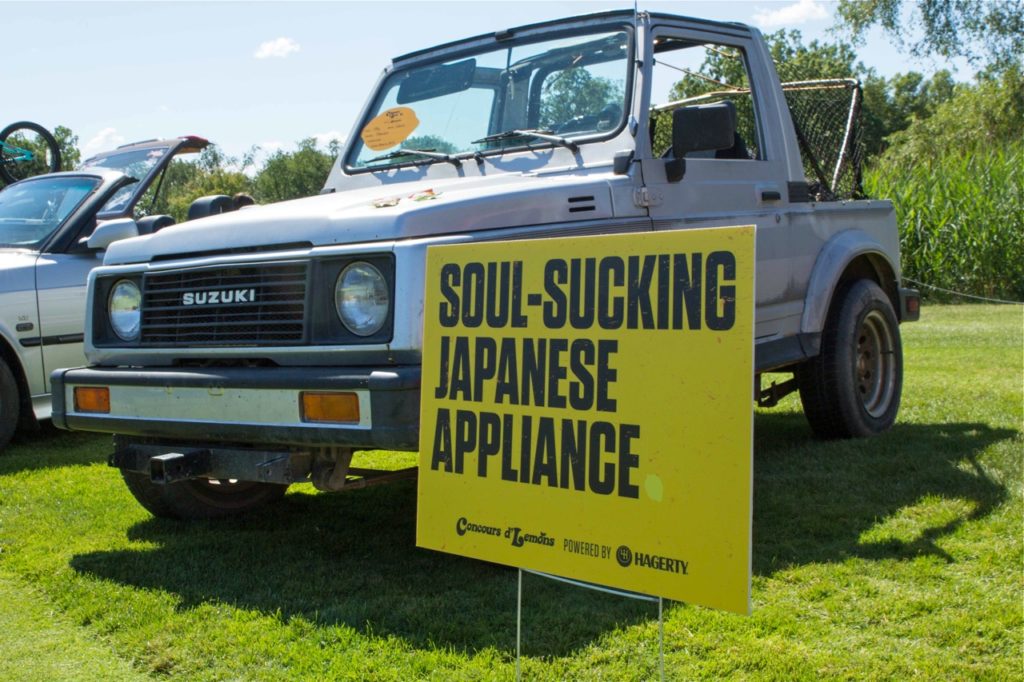 The Concours d’Lemons captures car design, utility and owners attitude, but in a different way. With signs clearly marking the way to “The Land of Misfit Toys” there are smarmy signs, fake money and even Twinkies to bribe for judges!

For more information about the Concours and all the 2017 winners, please visit http://concoursusa.org/