Skip to content
2014 SS debuts as racecar, wins Daytona 500 and joins Camaro and Corvette to round out Chevrolet’s maximum performance portfolio. 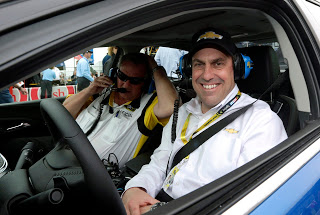 “The Chevrolet brand was largely built on the strength of rear-drive performance sedans, yet it’s been 17 years since we’ve offered one,” said Mark Reuss, president of General Motors North America, above, right, who drove the Pace Car. “The all-new Chevrolet SS fills that void and fills it better than any other vehicle in the brand’s rich history. The comfort, convenience, spaciousness and V-8 power make the 2014 SS a total performance package unlike any
other on the road today.” 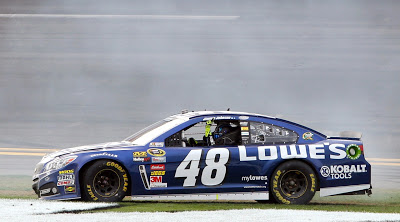 Five-time series champion Jimmie Johnson, driver of the No. 48 Lowe’s Chevrolet SS, above, won the 55th running of the Daytona 500 at Daytona International Speedway on Sunday. It also marked the first victory for the recently introduced 2014 Chevrolet SS, which made its NASCAR Sprint Cup Series debut. Johnson, who also won Daytona 500 in 2006, now has 61 victories in 400 career starts. 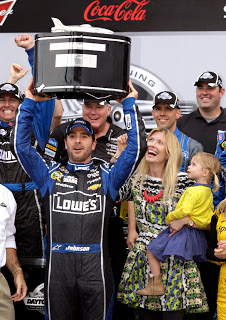 Chevrolet’s SS is powered by the LS3 Chevrolet V-8, expected to deliver 415 horsepower and 415 pound-feet of torque. Also used in the 2013 Chevrolet Corvette, the LS3 displaces 6.2 liters, more than the 5.5-liter V-8 powering the Chevrolet SS NASCAR competitors.

The LS3 is married to a six-speed automatic transmission, which can be shifted manually using TAPshift paddles mounted on the steering wheel. With an aggressive 3.27 final-drive ratio, the Chevrolet SS accelerates from 0 to 60 mph in about five seconds – making it one of the quickest sedans on the market. 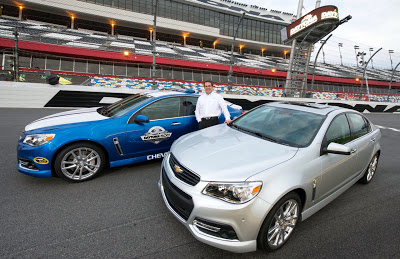 Handling is also improved by a near 50/50 weight distribution, and a low center of gravity – made possible in part by the aluminum hood and rear deck lid that are 30 percent lighter than traditional steel panels. 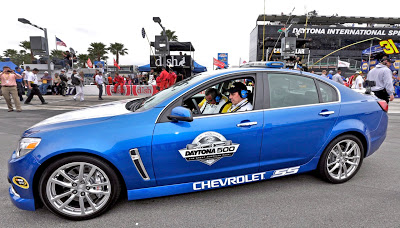 “Our goal was to create a car that delivers incredible grip and handling balance while cornering, while still being comfortable to drive on the road,” said David Leone, executive chief engineer GM global programs. 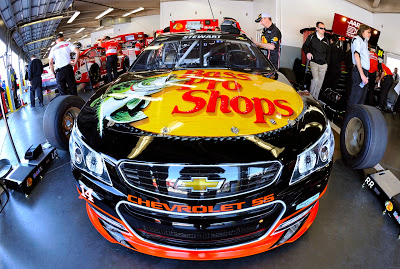 The staggered front and rear wheels, which are pushed out to the corners, enhance the sporting, muscular stance of the SS. Up front, the aluminum hood features a subtle “power bulge” hinting at the power of the engine underneath. At the rear, the tapered, teardrop shape contributes to improved aerodynamic performance. Premium cues include jewel-like chrome accents, standard high-intensity discharge headlamps and light-emitting diode daytime running lights.

The spacious interior of the SS will comfortably accommodate five adults, with 42 inches of front legroom, and 39 inches of rear legroom. Leather seating surfaces are standard, as are eight-way power adjustable front bucket seats with additional side bolstering that hug the driver and front passenger in tight-handling situations. The SS emblem is prominently stitched onto the soft-touch instrument panel which features two types of chrome finish – a satin gloss and a bright chrome. At night, ice blue ambient lighting illuminates the interior. 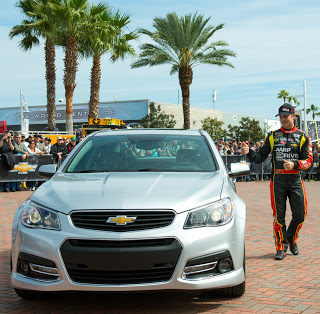 An integrated center stack includes infotainment, climate and other vehicle controls. The Chevrolet SS also offers a long list of technology features as standard equipment including:

The ‘14 SS will be available in the fourth quarter of 2013, with prices set closer to the on-sale date.  When it arrives in showrooms, the SS will join the Corvette and Camaro, whose combined sales have made Chevrolet America’s favorite performance brand for the last two years.

For the latest information on Chevrolet products, please visit
http://www.chevrolet.com/