Skip to content
Mike Matune represented the Car Guy Chronicles at the ninth-annual Concours d’Elegance and Motor Tour along the shores of the Choptank River in Maryland. 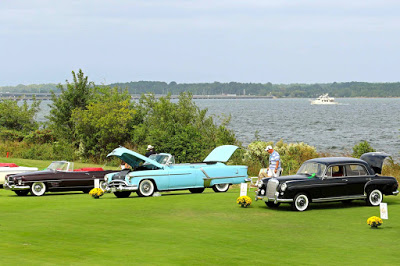 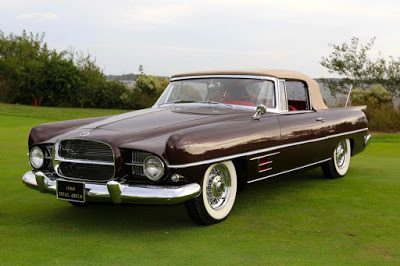 Held on the fairways of the River Marsh Golf Club at the Hyatt Regency Chesapeake Bay, the St. Michaels Concours d’Elegance Concours blends pre and postwar European and American classics into an eclectic mix of automotive art, all for the benefit of the Mid-Shore Community Foundation. Shot of the show field, top, gives you an idea of what we speak. In the background, a boater takes his pride and joy for what could be its last jaunt of the year before it’s laid up for the Winter. The Dual-Ghia, above, was Eugene Casaroll’s dream of combining Italian coachwork, American running gear and show car styling. Built on a Dodge chassis with body by Ghia and styling by Chrysler’s Virgil Exner, about a 100 would see production between 1956 and 1963. They became the darlings of the rich and famous, from politicians like Ronald Regan, Richard Nixon and Lyndon Johnson to actors like Sterling Hayden and Desi Arnaz to just about the entire “Rat Pack.” Joan and Sonny Abagnale finished their restoration just in time to debut it at the St Michaels Concours. 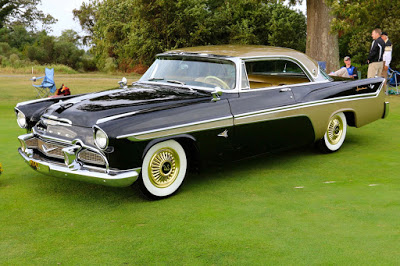 Doug Dressler’s ‘56 DeSoto Adventurer is an outstanding example of the limited-edition model introduced in mid-1956. The Adventurer featured a dual-quad Hemi with performance upgrades, HD suspension, an over the top interior and distinctive two-tone paint schemes. Dressler’s car boasted two notable options. A clock was mounted in the steering wheel hub that would wind itself as you turned the wheel. Under dash was a record player designed to use records unique to the unit. 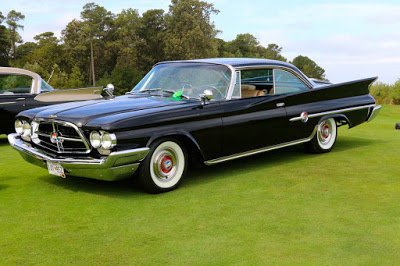 The debate as to what constitutes a Muscle Car and who built the first one will go on, likely without ever being resolved. But let’s talk about one contender for both honors, the Chrysler 300 “Letter Car” series. Built from the mid-1950s to the mid-1960s, they were Chrysler’s entry into the premium high performance market. The BHA Automobile Museum’s ‘60 300F sports buckets seats and console, high-performance 413-inch Wedge engine and distinctive badging. On special order, an higher horsepower engine and four-speed manual were available. 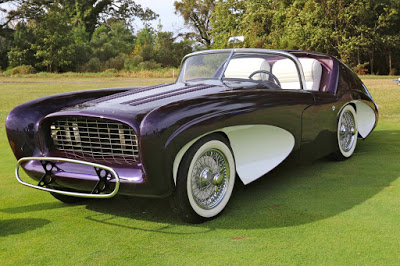 Whether or not the Flajole Forerunner Concept Car actually improves on the styling of the Jaguar XK120M upon which it is based can be debated. But as with all concept cars, you need to look further to see more practical ideas they may incorporate. In this case a Plexiglas roof retracts into the tall tail, the seats feature integral headrests and the rear-view mirror is mounted atop the windshield to provide a panoramic view out of the car. On the side, contrasting fender coves predate their incorporation into production car designs. Today the AACA Museum in Hershey, Pennsylvania is the Forerunner’s caretaker. 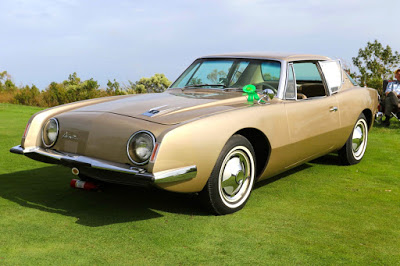 Ann and Paul Rose brought their unrestored Studebaker Avanti to St Michaels. The Avanti was something of a last hurrah for the once proud Studebaker brand. Designed by Raymond Lowey and built on a shortened Lark chassis, they would feature knock-out styling and aircraft-inspired interior with an integral roll bar and standard front disc brakes. Drivetrain combinations include supercharged engines and four-speed transmissions. The Avanti continued on in a number of guises after Studebaker ceased manufacturing. 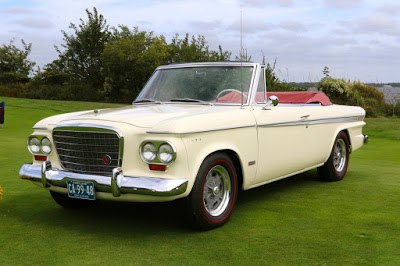 The Studebaker Lark achieved notoriety as the first American compact car and was a sales success until the competition caught up. Less well known is the Lark’s place in racing. where it made use of hi-performance parts from other Studebakers. They were found in international competition, as the Lark was the second American badge homologated as a production car by the FIA. Danny Jones’ Lark is an unusual supercharged convertible. 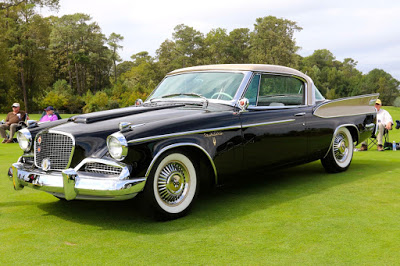 Mark James’ Golden Hawk is the third Studebaker in the Car Guy Chronicles’ coverage, surely a record. Studebaker, lacking the resources of its bigger rivals, had to make use of “creative” restyling rather than depend on all new body shells to update its line. Such is the case here, where the Starliner coupe was updated with a prominent grille and tailfins. The hood bulge and louvers accommodate a “Sweepstakes” 289-inch V8 with “Jet Stream” supercharger. Inside full instrumentation in an engine-turned dash panel helps to freshen the car’s feel. 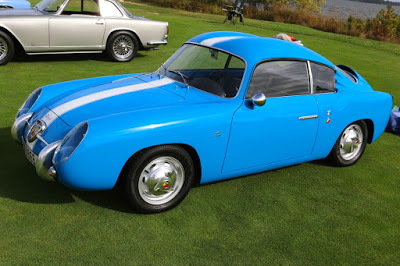 Ken Swanstrom’s Fiat Abarth 750 coupe illustrates how a tiny car often makes up in speed and agility what it lacks in size! A product of Karl “Carlo” Abarth, it showcases “tuned” pedestrian Fiat mechanicals cloaked in light, streamlined Zagato bodywork. Abarths became the stalwarts of small displacement racing classes, and on occasion giant killers when the situation demanded more than brute power. 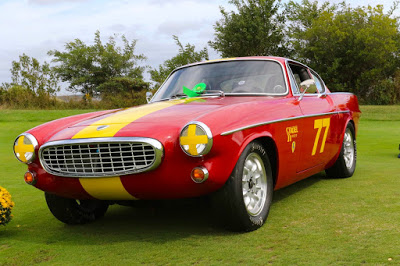 The Volvo P1800S is an interesting mix of robust Swedish mechanicals wrapped in a shape that has withstood the test of time. Patricia and Robert Stadel’s example has had a number of careers over their long-term ownership. As a vintage racer it competed successfully at 18 separate venues. Now it is a Concours award winner. The car is still driven, most recently as a participant on the St. Michaels’ Motor Tour, the day before the Concours.

Our thanks to George Walish, St. Michaels’ Chairman and Founder, as well as the entire Concours staff for putting on, what is becoming, a staple on the east Coast Concours’ calendar.