Skip to content
Our field agent Mike Matune was on the ground at Carlisle’s annual bash for lovers of everything Dodge & Plymouth. 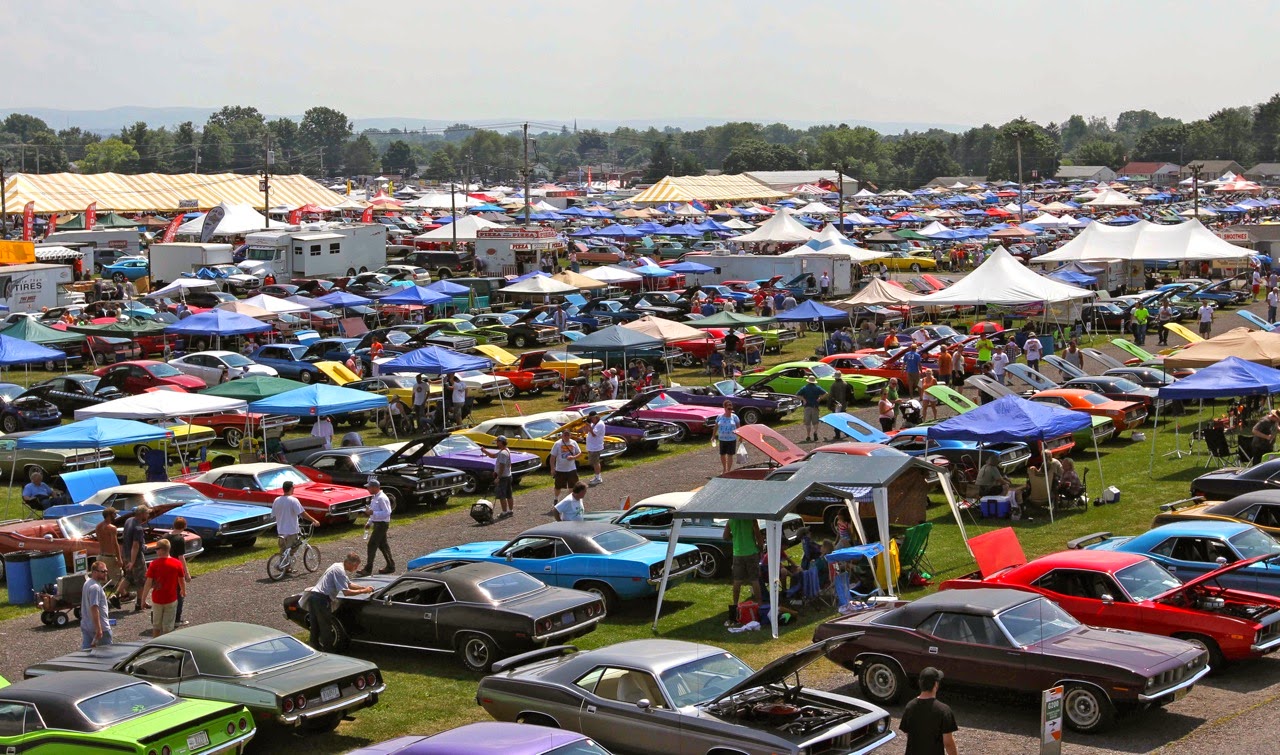 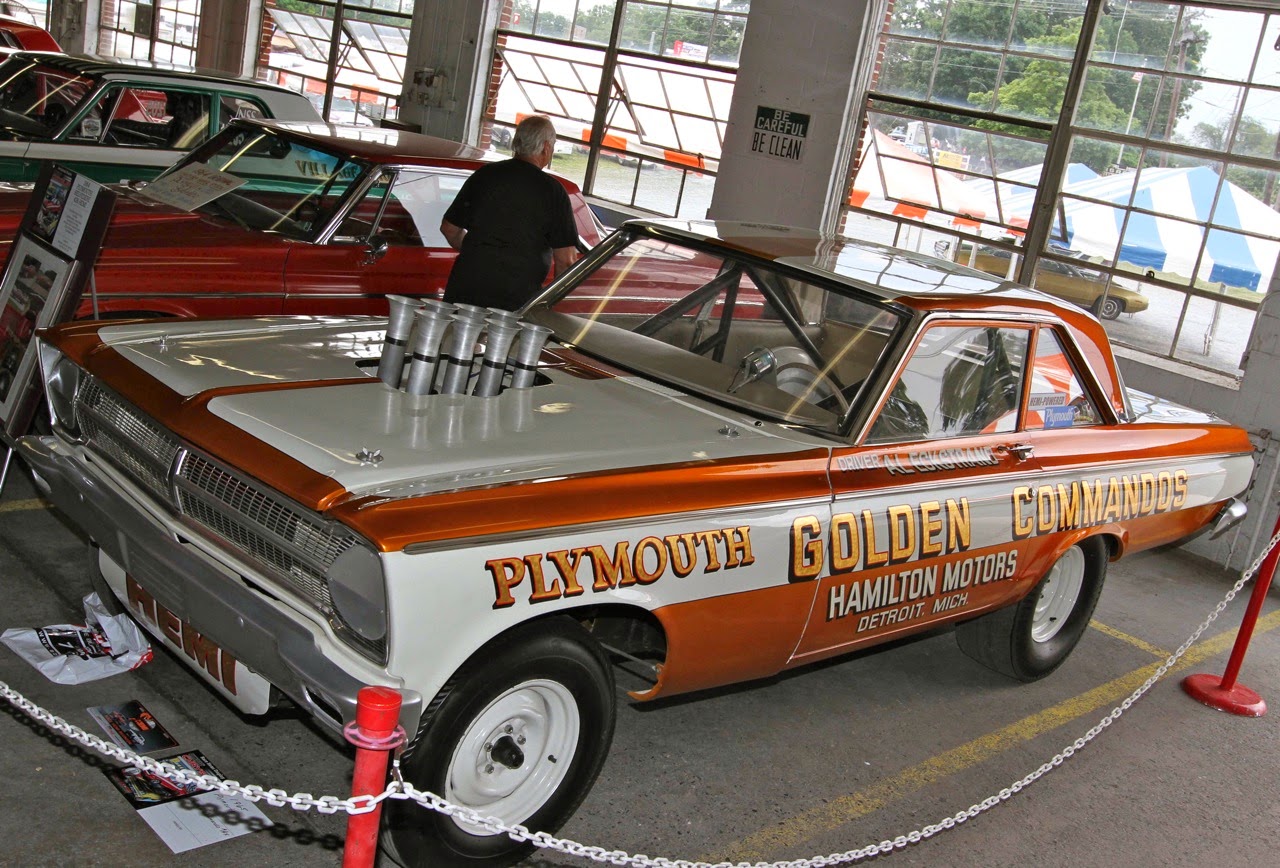 Carlisle Events once again filled the Fairgrounds with every manner of Chrysler product for the 2014 Carlisle Chrysler Nationals. Here you look over just a portion of the goings on and ask yourself; where else could you see this many immaculately prepared E-Bodies (1970-‘74 Barracudas and Challengers) in one place? As the factory Supercar wars escalated, cars became ever more radical. Chrysler came to the fight with an altered-wheelbase racer and Hilborn-injected 426 Hemi power, moving further from its production car roots. A/FX cars like this gave birth to the Funny Car concept and helped fuel the match racing wars. 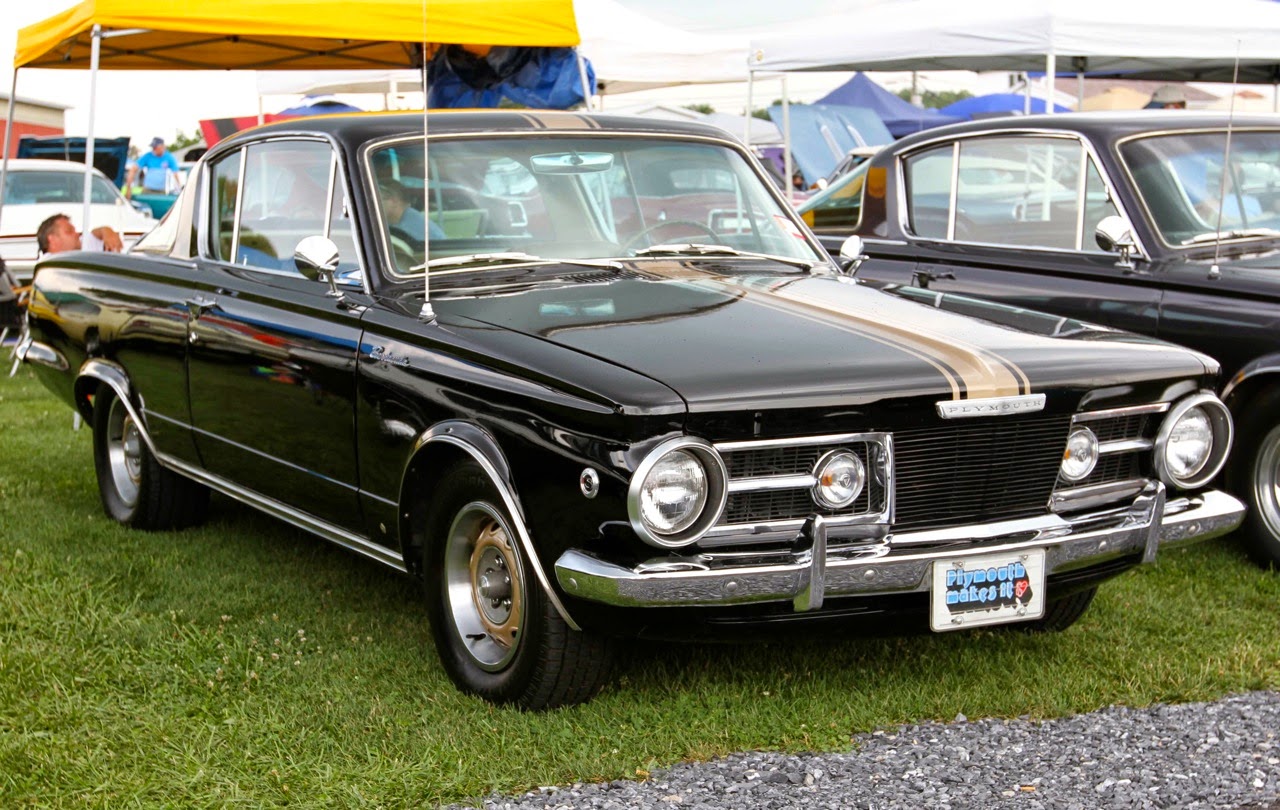 With all of the hoopla over the Mustang’s 50th Anniversary this year, it sometimes gets lost that the Mustang was the second Ponycar introduced, beaten to market by about two weeks by Plymouth’s Barracuda. Vince Wilczynski’s is a Formula S version, which, like the Mustang GT, added mechanical and cosmetic sporty components to the car. 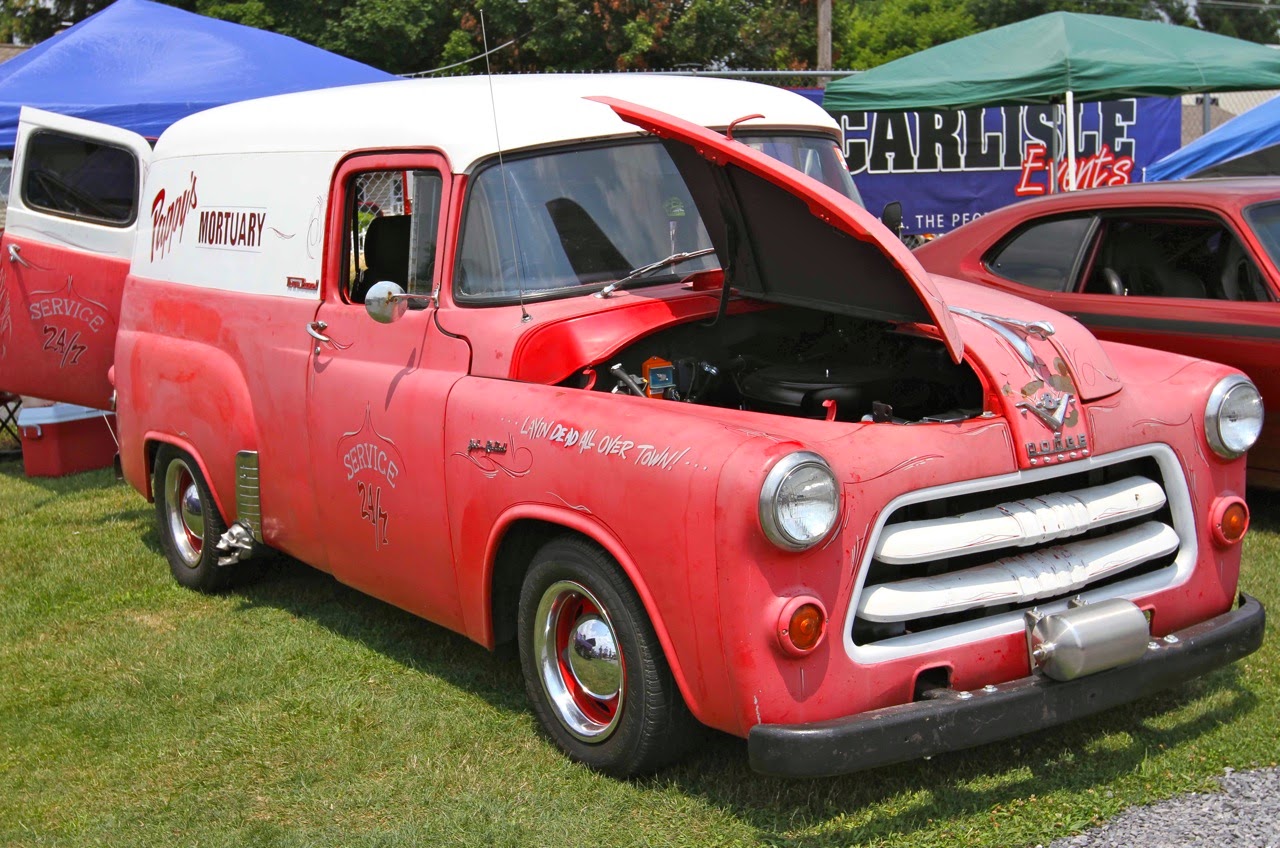 One would have to agree that Chrysler based street rods are not commonplace, but there was
a display of them there including Kevin Shue’s ‘48 Dodge Panel. He must have a sense
of humor as the truck bore the markings, “Pappy’s Mortuary” offering 24/7 service!
The exhaust tips were skulls. 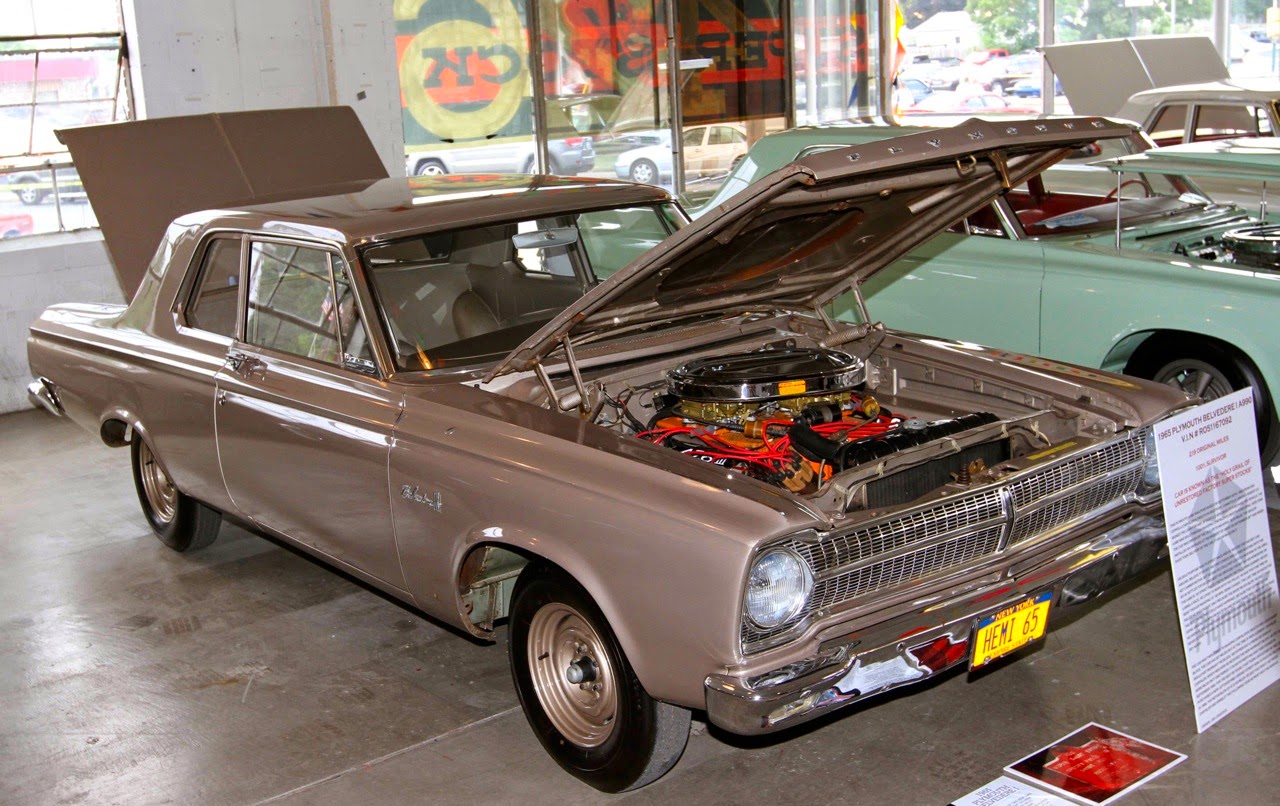 In 1965 Chrysler built a package of goodies around their race Hemi designed to go fast in a straight line and little else. The resulting creation bore the code A990. Joe Logiudice’s car is not restored, but rather a well-preserved survivor, and a benchmark for these cars. 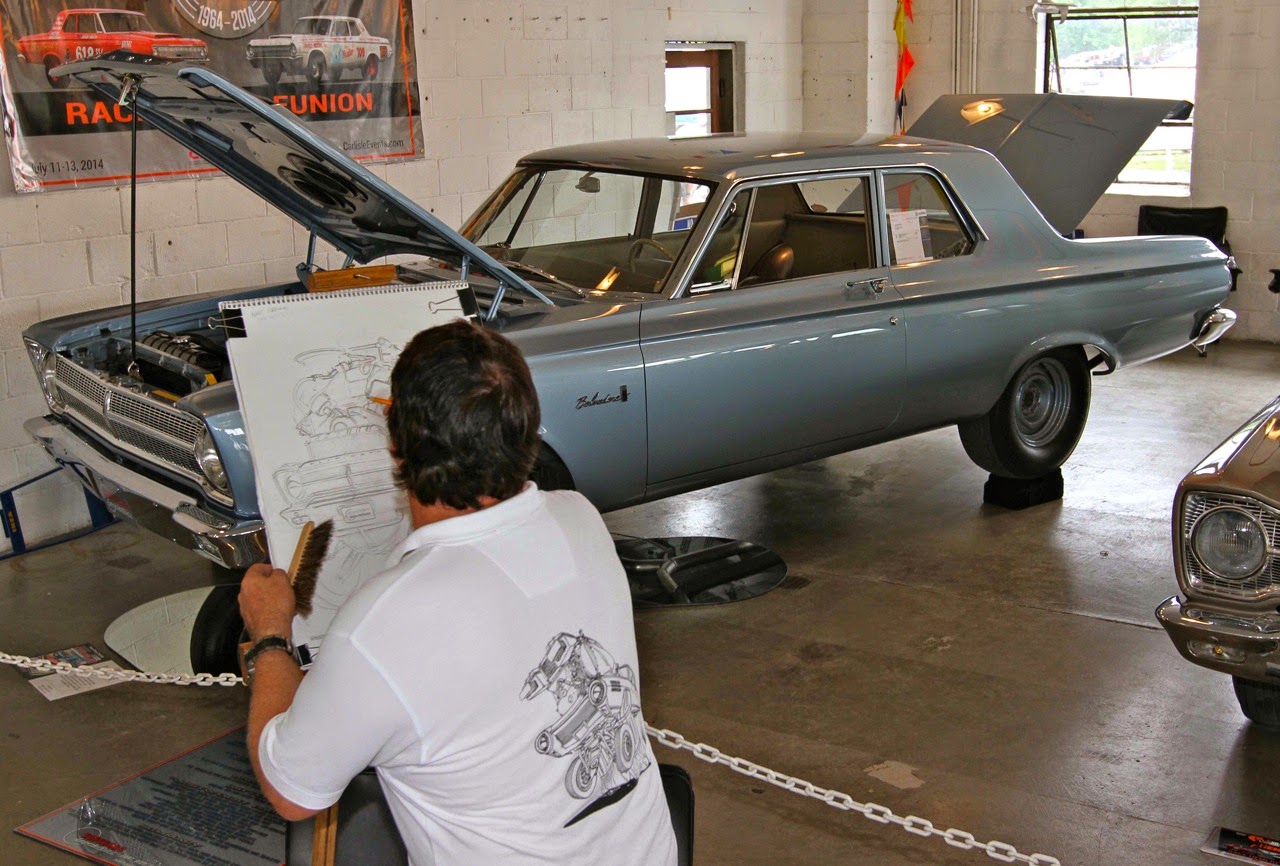 Pat Dougherty was doing car caricatures in the best tradition of the 1960s airbrush artists. It surprised me to see the actual detail he was putting into his work. The object of his efforts here is Walt Redmond’s ‘65 A990 Plymouth restored by Scott Tieman’s Supercar Specialties. The car has drag racing history plus “visits” to Bonneville and Pikes Peak. 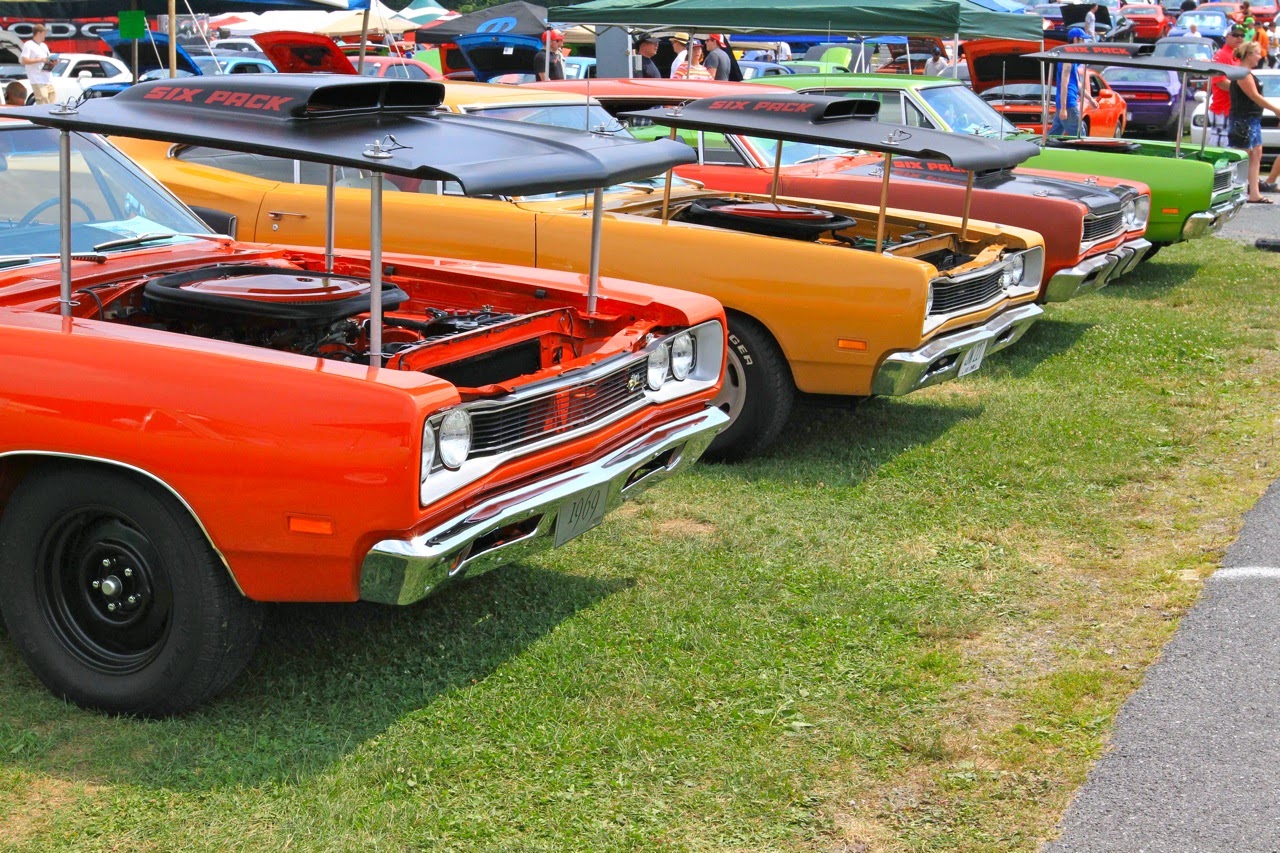 While purpose-built cars tore up the strip; Chrysler kept the concept of street performance very much alive with cars equipped with Six-Pack A12 packages. Available in Dodge and Plymouth versions, the cars featured 440-inch engines equipped with three two-barrel Holley carb intakes, lift-off fiberglass hoods with cold air induction and plain black steel wheels among other go fast goodies. These were a cost effective choice between the base V8 on one end and the
almighty (but expensive) Hemi on the other. 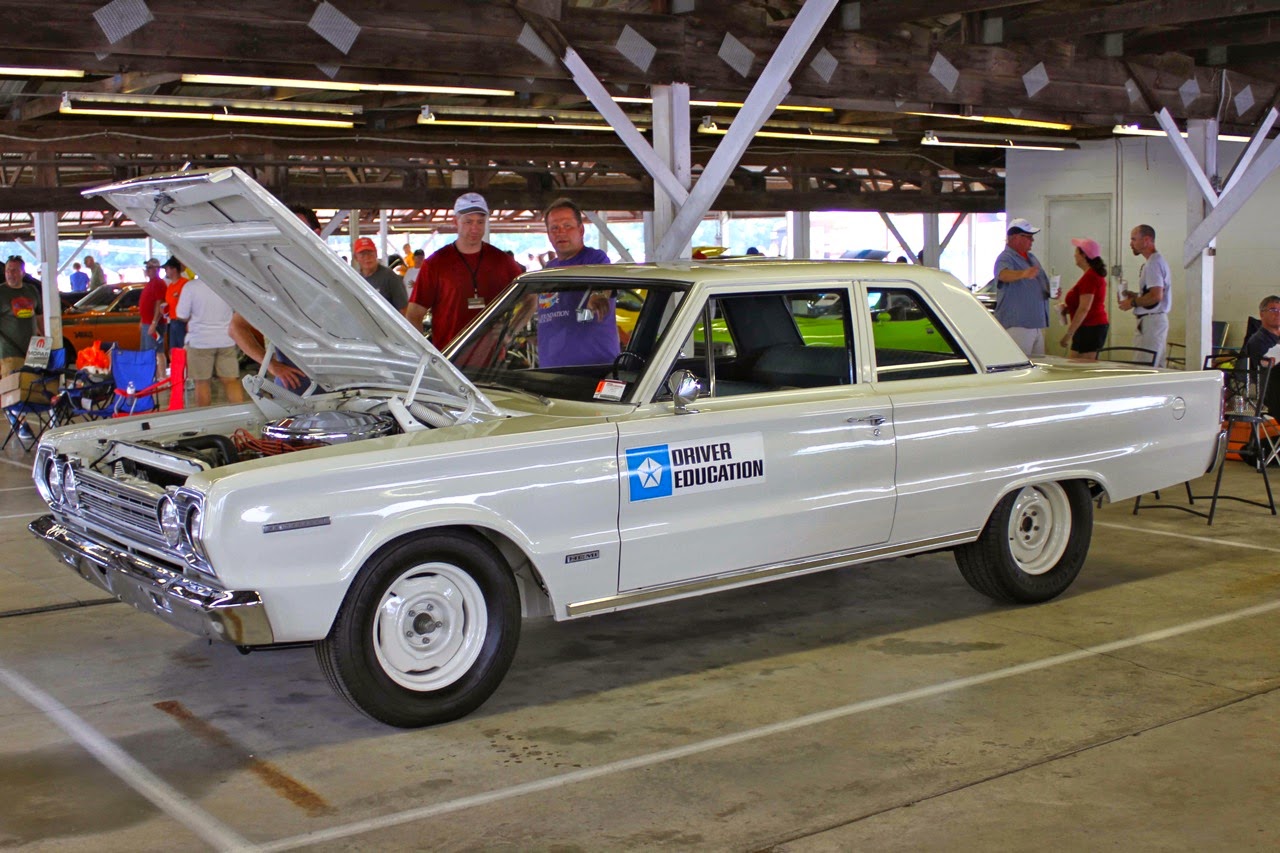 It wasn’t unusual for local dealers to make cars available to High School Drivers’ Education programs as a promotional tools; but is doubtful that many were four-speed Street Hemis! 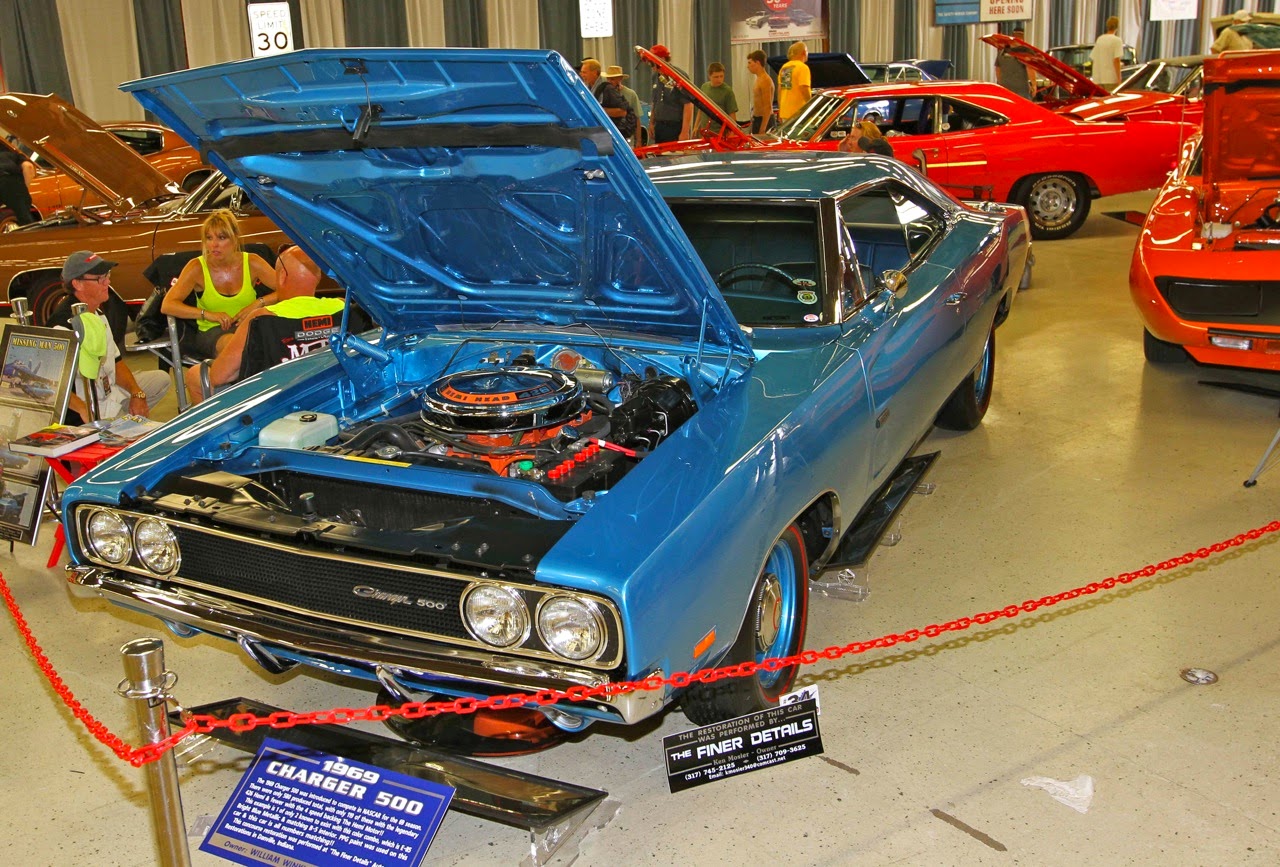 The Hemi was also a force on the ovals of NASCAR. One of the weapons of choice was the swoopy Dodge Charger 500. When found that a car’s sunken grill and recessed rear window disturbed aerodynamics, the Charger 500 resulted featuring a flush mounted grill and a
fastback rear window configuration with cleaner lines. 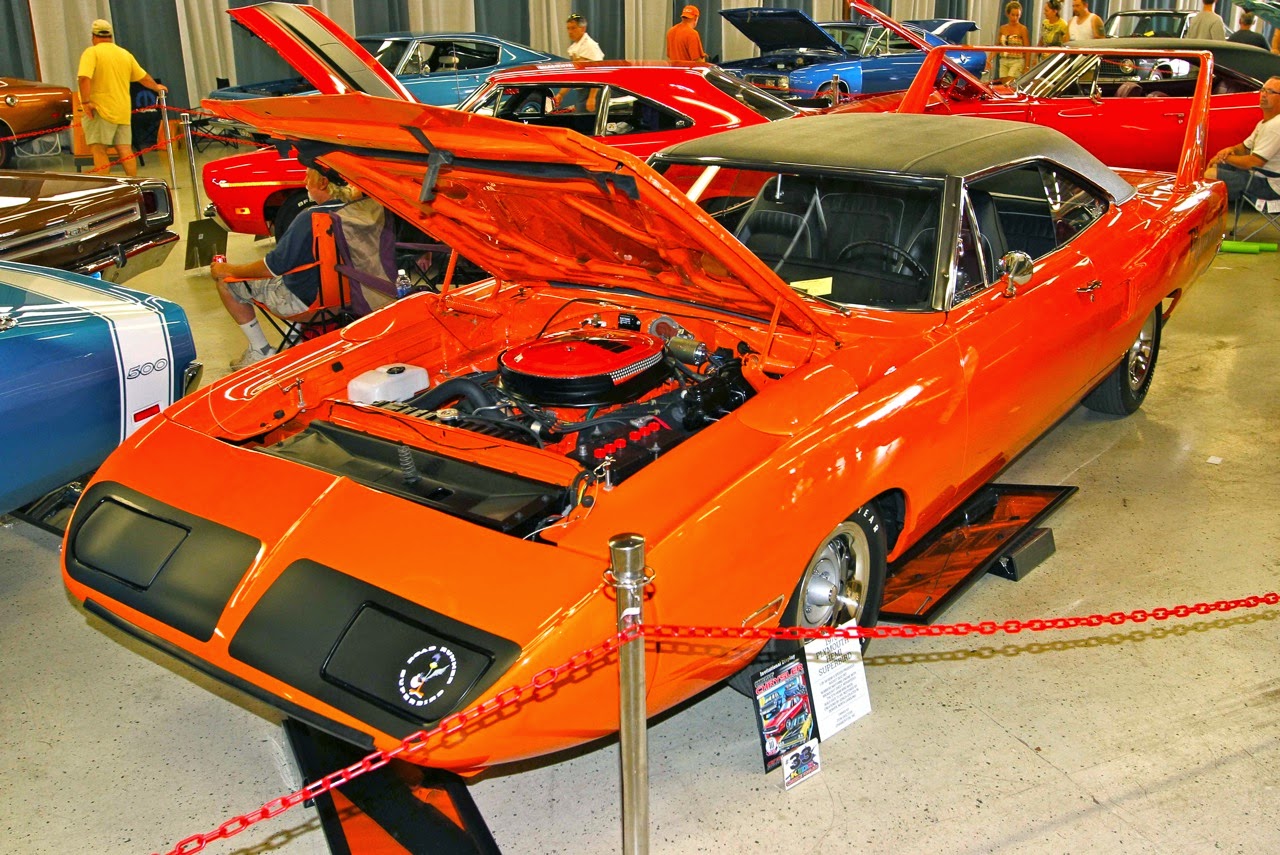 When even the purposeful Charger 500’s Aero package wasn’t enough, Chrysler stepped up with the droop-snouted, high-winged Plymouth Superbird and Dodge Daytona. Here is Don Doctor’s street Superbird. Perhaps less than fully practical, it did allow Chrysler to race similar versions as “stock cars” for a short period of time. 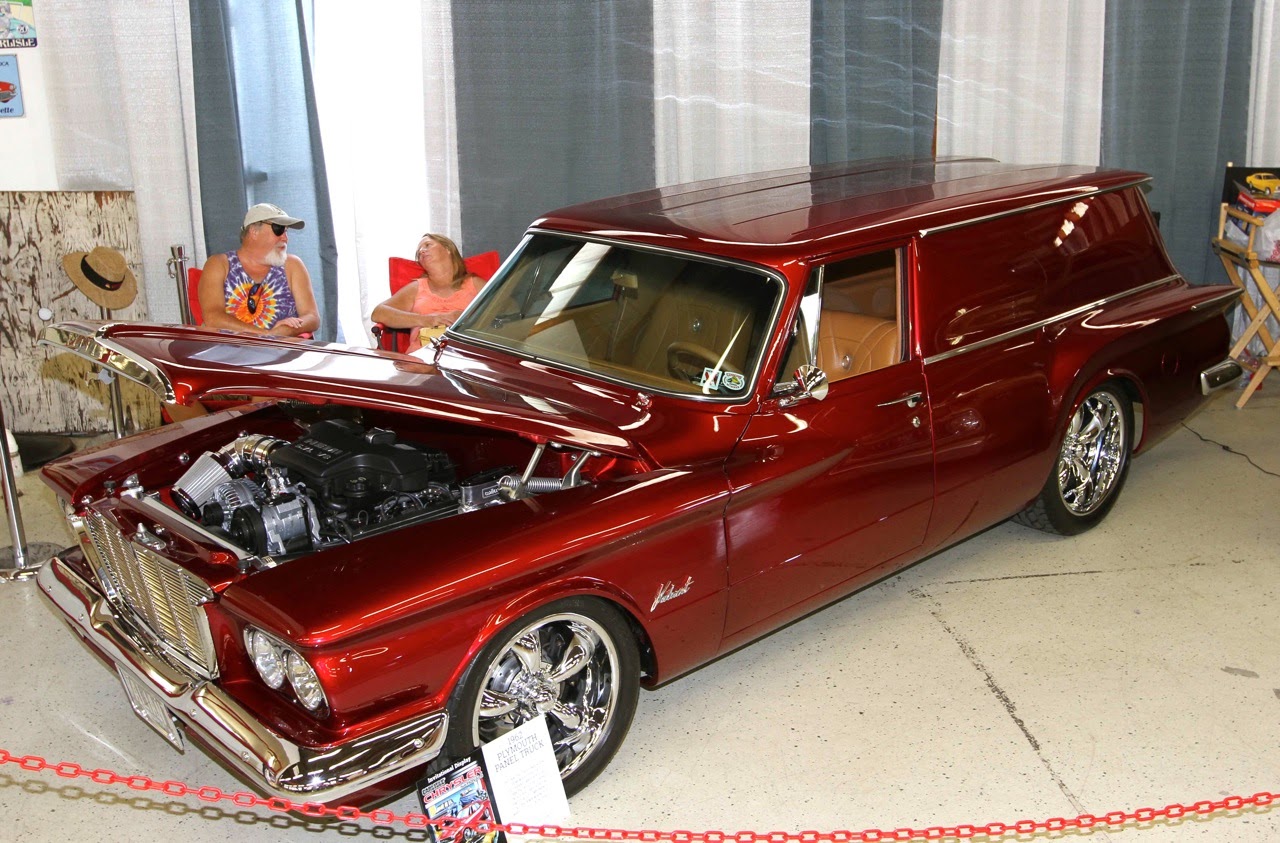 The unusual is almost commonplace at Carlisle. From what Barry Cawley knows of his Valiant panel truck, it is one of 50 produced for a Michigan power company, perhaps in concert with an outside contractor. Barry’s Dad bought it because it was unusual, later gifting it to Barry who couldn’t resist turning it into a custom street machine. 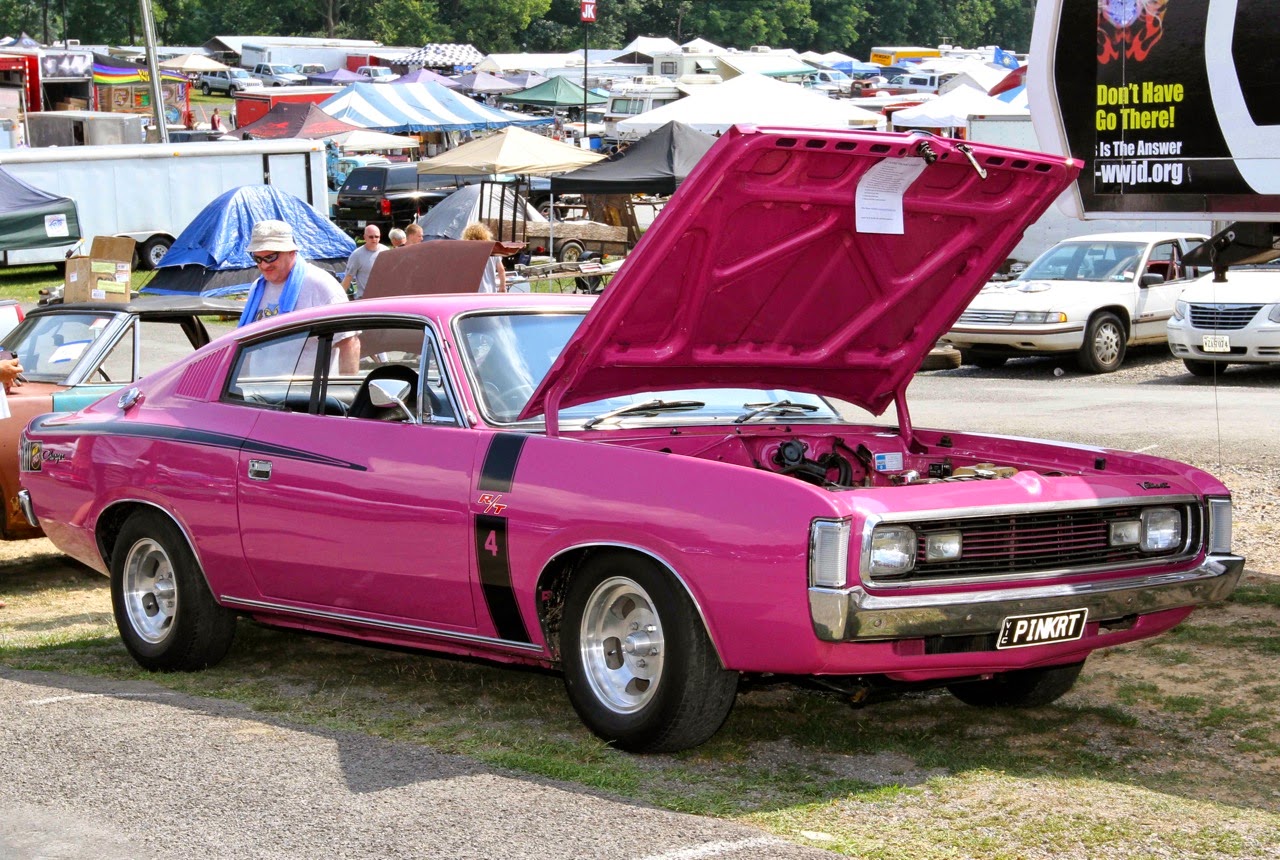 Chrysler, like Ford and GM, built cars in Australia. The information presented with this Charger R/T Six-Pack coupe indicated it was built from a more common model, so I can’t comment on its total accuracy. However it does show the styling and nomenclature tie-ins with the Chrysler North American offerings. Power comes from an inline Six with three dual-choke, sidedraft Webers. It shows how the muscle car concept translated overseas.