In 1965 Larry Jaworske was building car models, mowing lawns and learning about building drag cars from neighbors and his older brother, Gary. And, he couldn’t get enough of the Mamas and Papas Grammy-winning rendition of California Dreamin’. 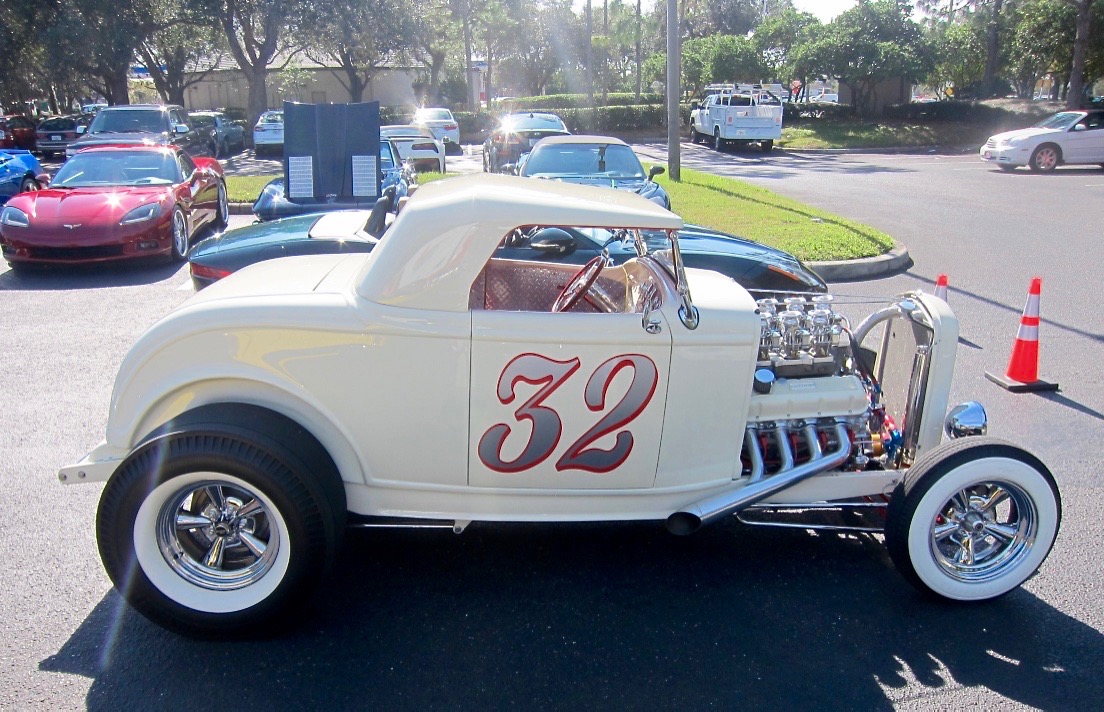 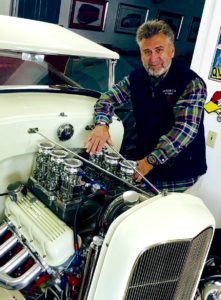 Unlike the narrative of the hit song that deals with escaping the cold to head to warmer climes, Larry’s interest had little to do with weather. It had everything to do with hot rods and muscle cars. More than anything he wanted to cruise around Southern California in a ’32 highboy roadster, preferably one powered by a potent Chevy. He’s waited a while, but his teenage dream has come true: CALIFORNIA DREAMIN’: ’32 FORD. 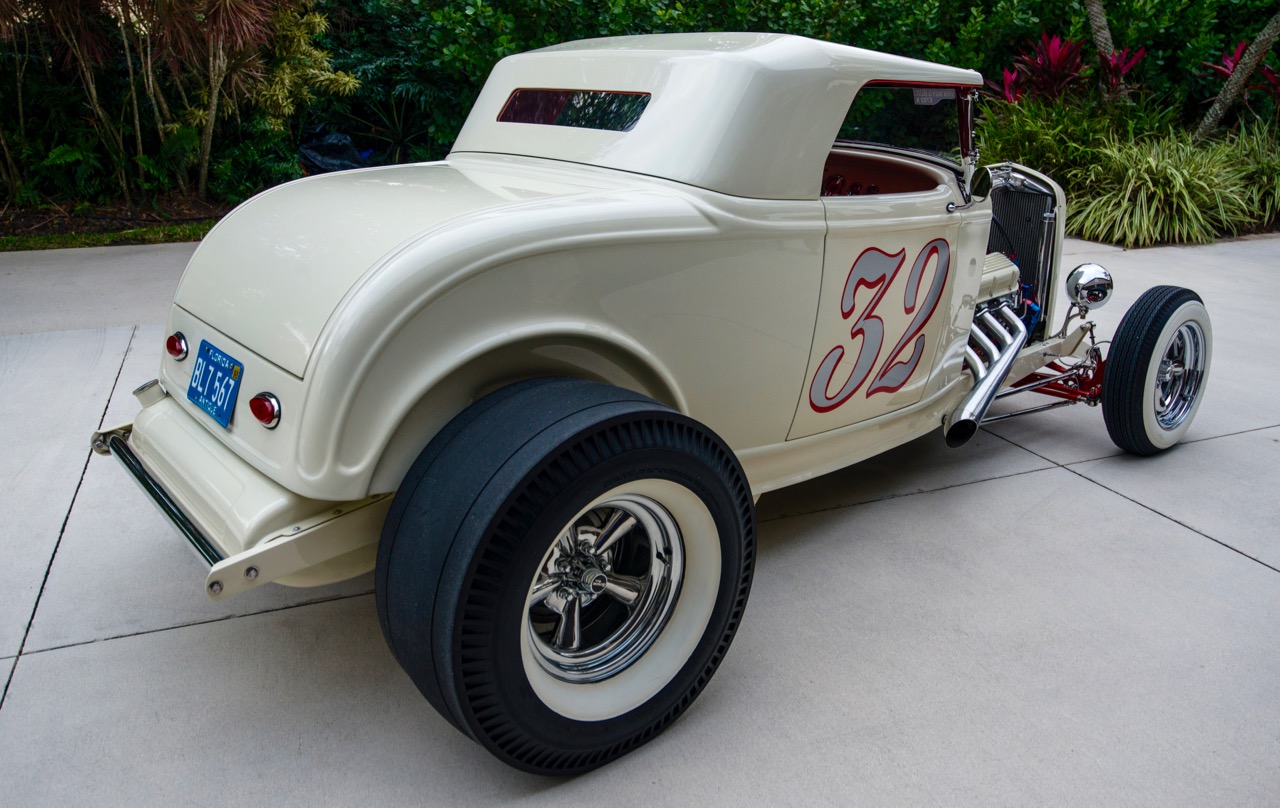 Although Larry had previously owned a ’32 Highboy, what he really wanted was the hot rod of his dreams – an old-school style roadster like he imagines he would have seen had he made it to Southern California when he was a teenager. Not a pre-fabbed, crate-engined rod ordered new by checking off boxes on an online ordering sheet. While not interested in building his dream rod, he also wasn’t interested in choosing from the myriad of already built hot rods that flood the market each year. He fortunately found a happy medium in his home state of Florida – a hot rod in the early stages of being built. Larry was able to input his ideas during the building of a car for somebody else, and then he purchased the assembled car and proceeded to sort it out in his home garage. Who says you can’t have your cake and eat it too? 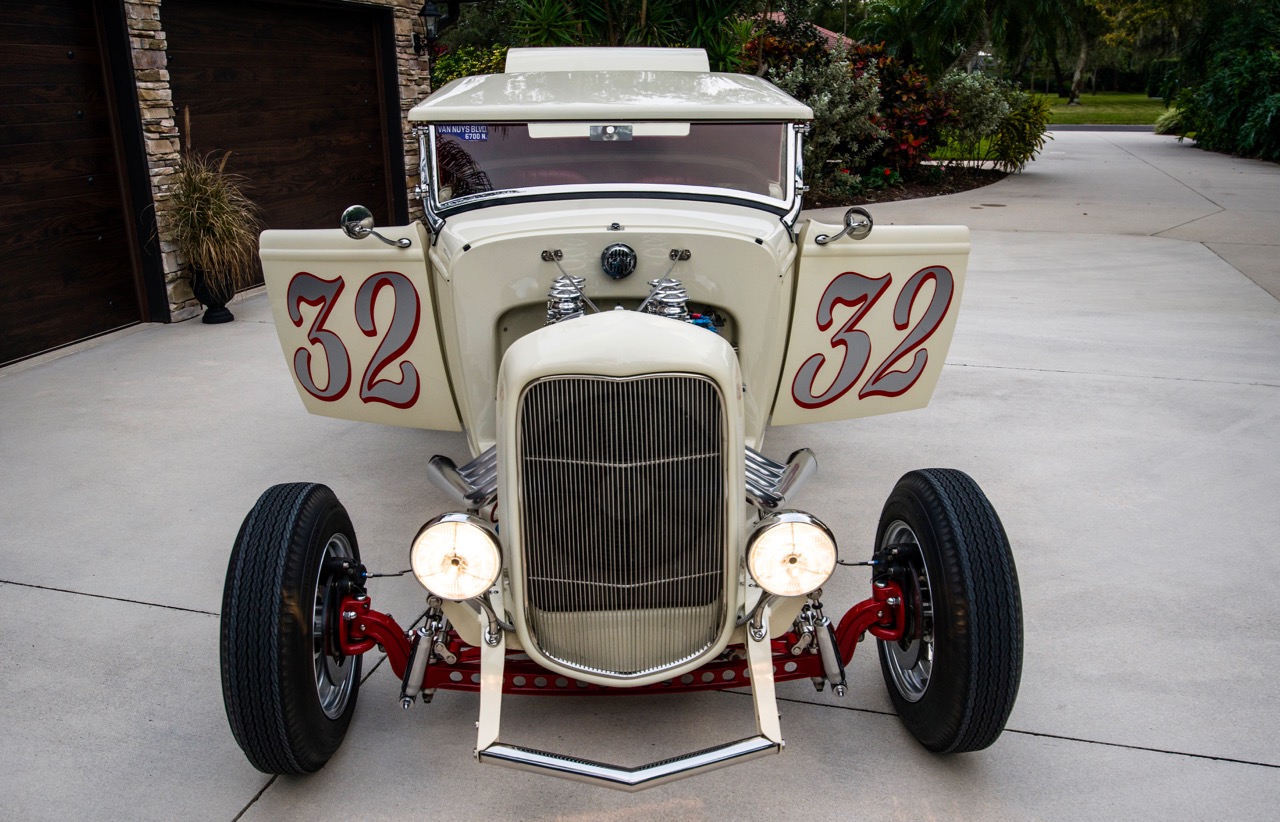 “I had been following the build of a hot rod in Florida that started out as a So-Cal Concept ’32 Highboy roadster. Fortunately I had been able to input the build fairly early on and I liked what I saw,” commented Larry. “After basic assembly it was shipped to a shop in Minnesota for paint; then to Houston, Texas for big-block engine modifications and final assembly. Then I purchased it in the summer of 2019 and had it shipped to Sarasota for final engine sorting/tuning and paint/graphics details.”

That’s a somewhat simplistic explanation for how this complicated build actually came together. When Larry first became involved with the builder of this Highboy, it was in pieces and in the process of having its frame, assorted parts and body mated together for a guy in northern Florida who Larry did not know. Then the car was shipped to Minnesota for paint and additional suspension upgrades, and it was sold.

Larry did know the first buyer and signed on as a consultant, primarily for paint and powertrain choices. By the time the hot rod was shipped to Texas for engine and transmission, the owner’s interest shifted to another project car. That’s when Larry stepped in and took over ownership. Once the car was in Texas, he made the final decisions regarding transmission, engine mods and wheel and tire combinations. At this time he also oversaw its interior treatment. 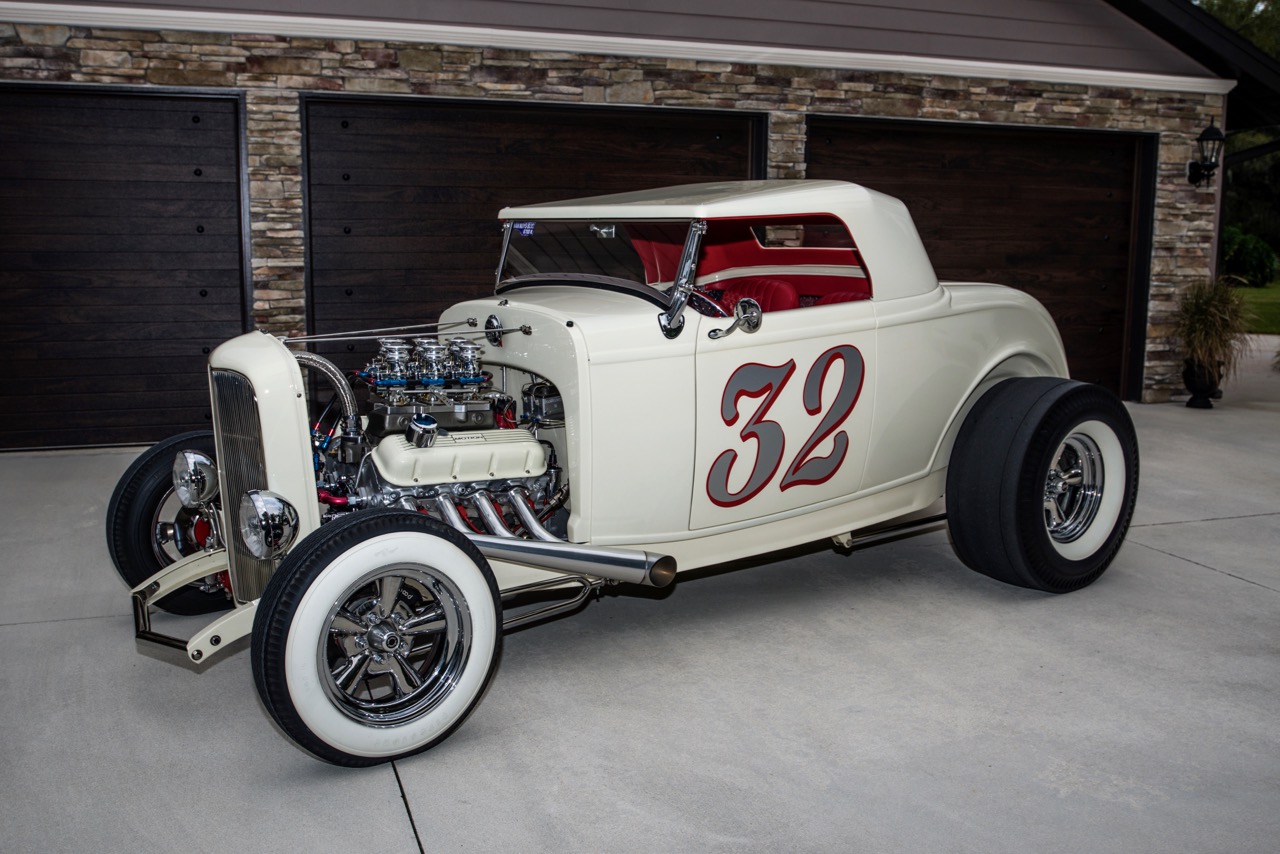 Unless you carefully go over Larry’s CALIFORNIA DREAMIN’: ’32 FORD you will probably miss many of the custom details that set it off from most Highboy Deuces on the road today. The Kaenan (Melbourne, FL) fiberglass body has a four-inch cabin “stretch” for increased legroom and the firewall has been recessed four inches. Painted Ford “Buttercream” base-coat, clear-coat lacquer, it sits on a powder-coated Roadster Shop chassis with Pete & Jake’s front suspension, four-inch dropped Magnum straight axle, Flaming River steering, four-bar rear suspension with coil-over shocks and Wilwood front discs and old-school rear drums. All hardware is high-quality stainless steel. Rod rides on Weld Rodlite wheels with spinners with BFG T/A Radials 165/80/15 front; 285/70/15 rear. Spares include slicks and Halibrand Bonneville style mags. 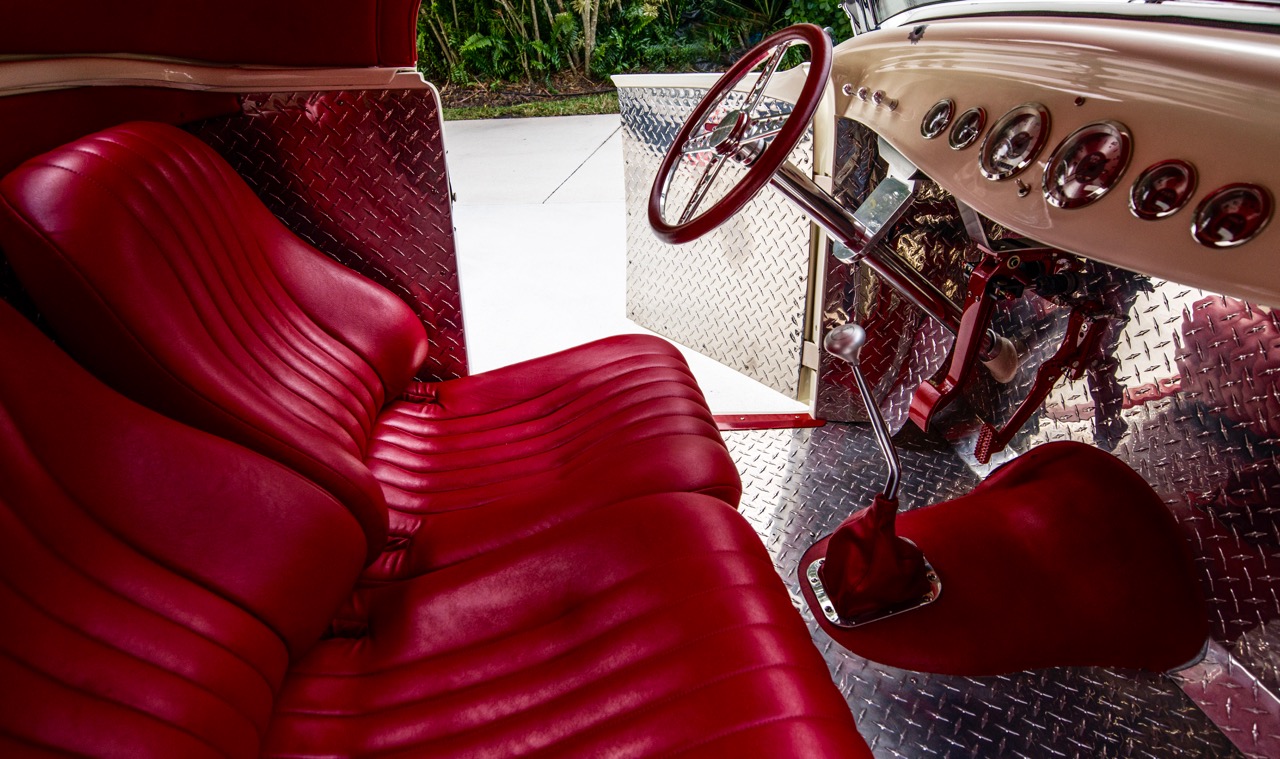 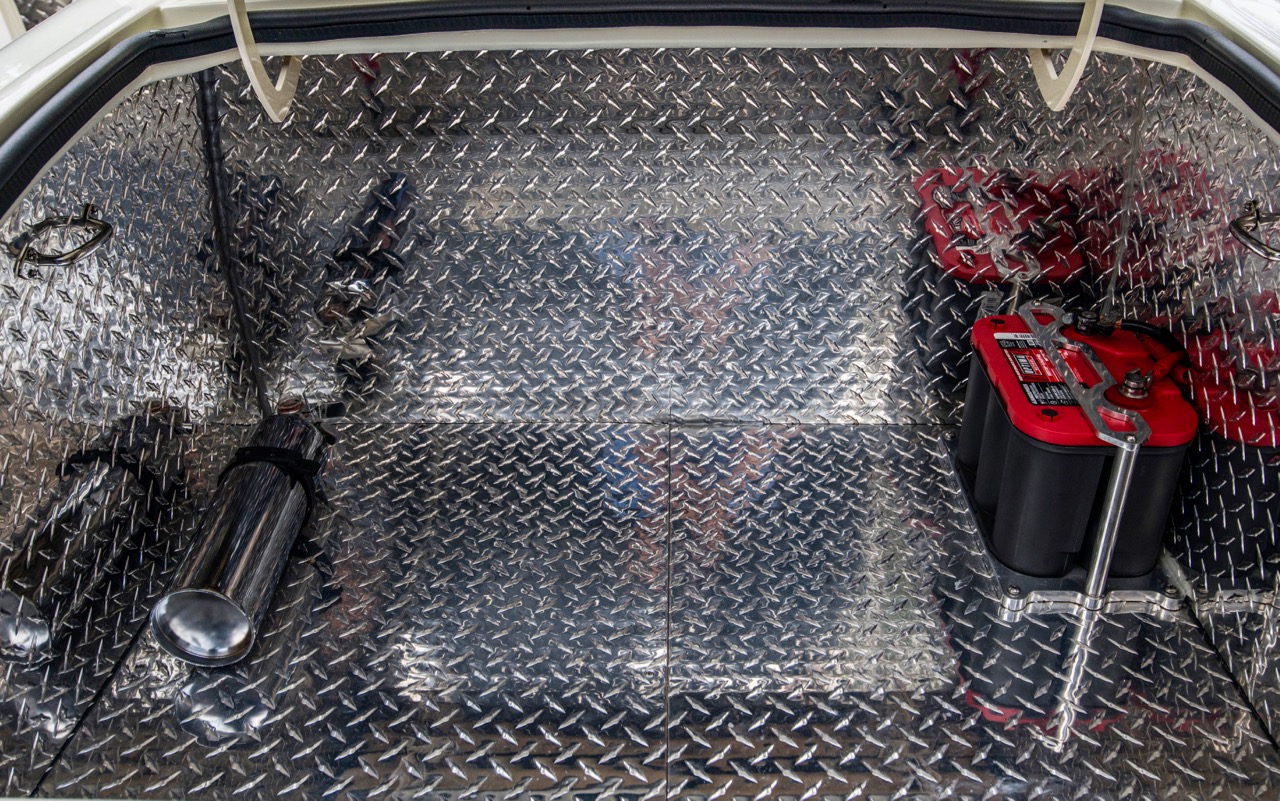 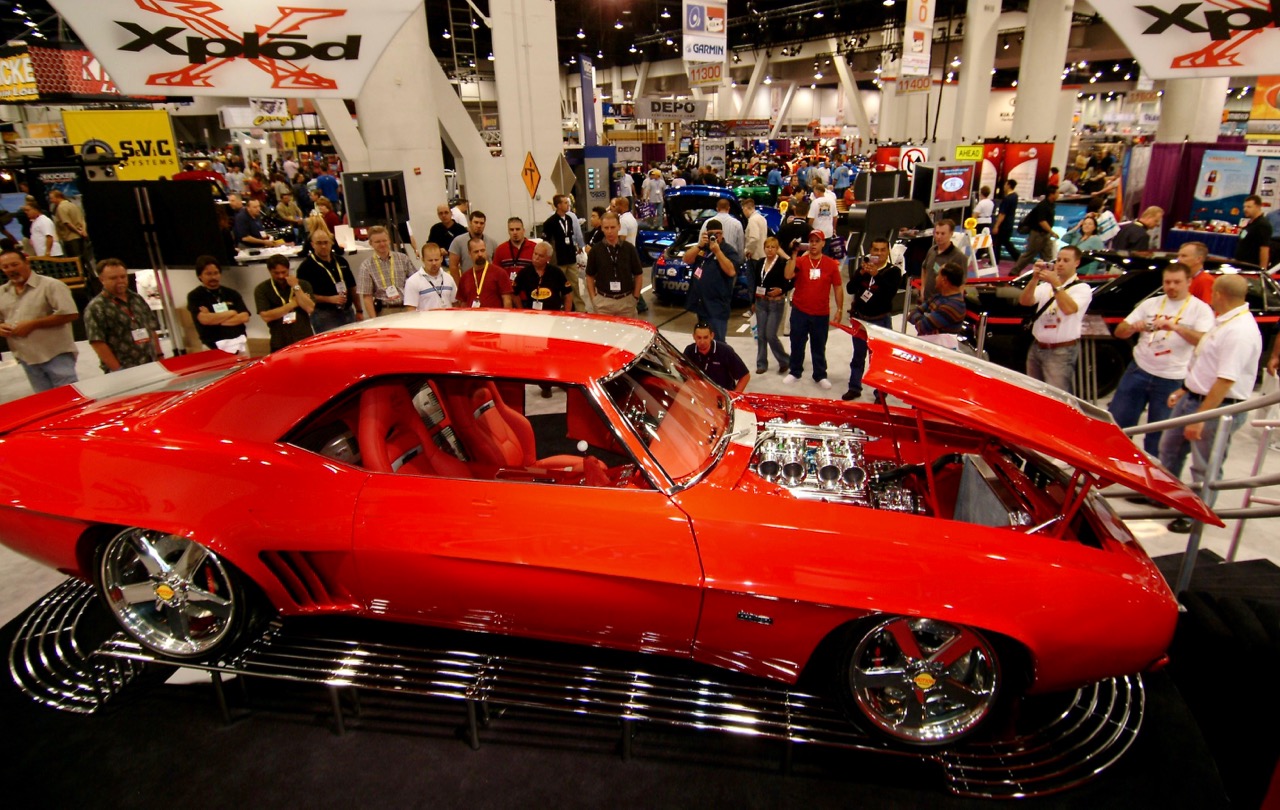 Back in the day when Larry was a teenager in Ohio, he devoured car magazines and spent as much time as possible hanging around with his brother, Gary and his friends at local drag strips. In 1967-1968, he got “hooked” on everything Motion and Baldwin-Motion (mostly big-block Camaros) from reading Hi-Performance CARS magazine. It all came together for him in 2005, after leading the charge a year or so earlier (with Joel Ehrenpreis, Joel Rosen and myself) to bring back the Baldwin-Motion brand. That culminated in building a limited run of Pebble Beach Concours-quality ’69 Camaros powered by pro-built, big-inch big-blocks. The launch edition – Baldwin-Motion SuperCoupe – a two-seat, tube-framed Camaro with a 13-inch setback 700-horsepower aluminum 540-inch, injected big-block dominated magazine covers that year. And, it won the coveted Best GM Vehicle Design Award at SEMA, above, and set a record at the 2006 Barrett-Jackson Scottsdale auction. 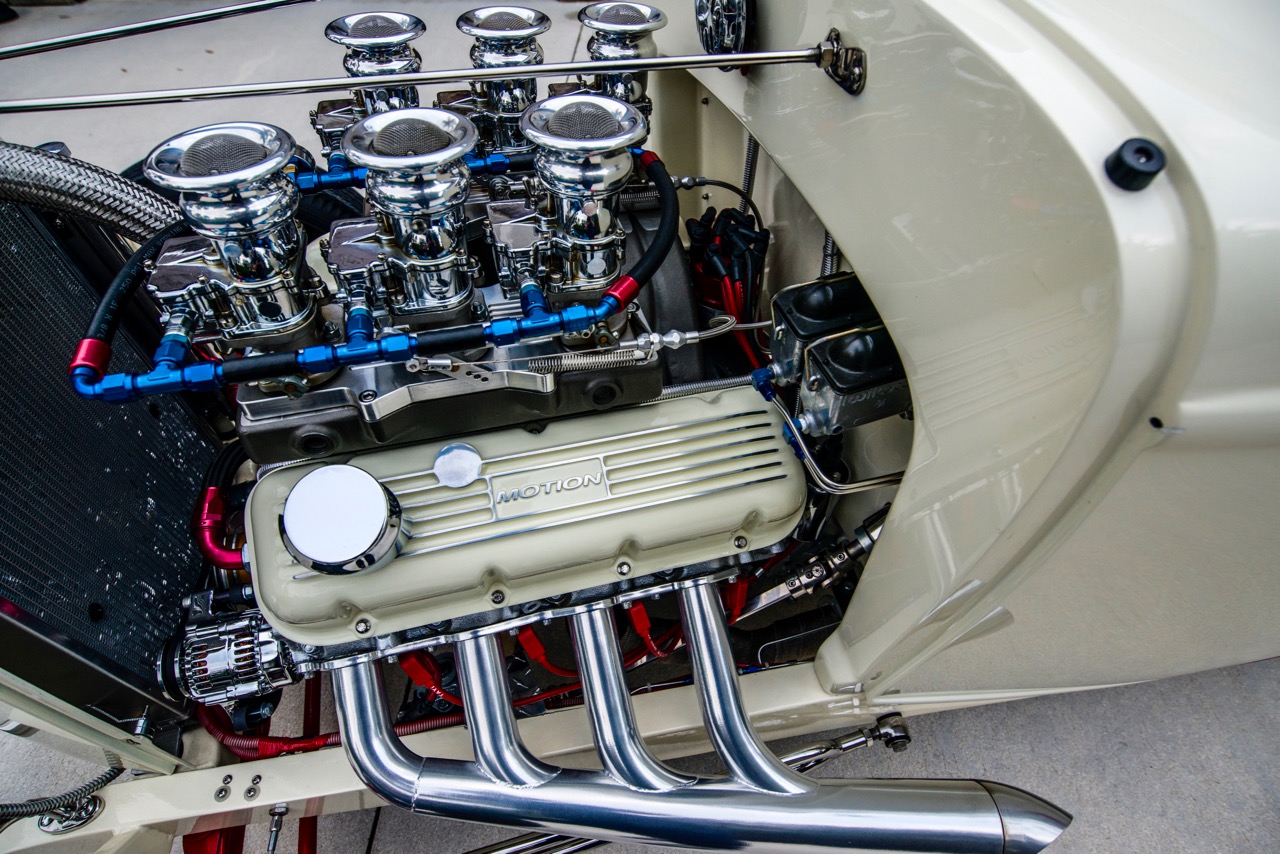 When it came time for CALIFORNIA DREAMIN’: ’32 FORD powerplant choice, it was Go Big or Go Home! Nestled between the rails of Larry’s Highboy, is 462-inch 454 Chevy bored .040-inch over and rated at 475 horsepower. Goodies include blueprinted heads and Summit Racing SUM-1301 hydraulic .502/.501-inch lift, 277/287 degree duration flat-tappet cam. A vintage Edelbrock XC96 Cross Ram intake manifold is fitted with six Stromberg Super 97 carbs. Progressive linkage is set up so that two carbs function as primaries and four as secondaries for smooth street driving.

Originally the 462-inch big-block was fitted with an Edelbrock Performer single-four-barrel intake manifold, Joe Hunt modified Vertex magneto, below, with Summers Brothers front drive and “commercial” valve covers. The magneto had armature problems and was replaced with a traditional Chevy distributor. In place of the original valve covers is a set of real MOTION alloy covers as used on the relaunched Baldwin-Motion Camaros. Color-keyed to the Buttercream exterior, they add, according to Larry, “at least five more horsepower!” 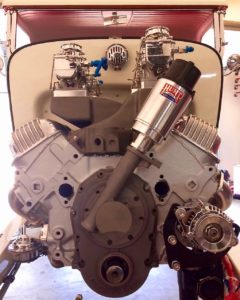 Because CALIFORNIA DREAMIN’: ’32 FORD was designed to utilize a removable Rootleib steel hood and louvered side panels as well as show off the detailed six-carb big-block, there are two sets of custom headers. One set can be tucked inside the rails to accommodate the hood assembly, while the second set serves as “bookends” for the well dressed 462-incher.

Cooled by an aluminum Griffin radiator, the big-block is hooked up to a much-modified GM THM350 automatic with manual valve body and a 2,000-rpm stall speed converter. An aluminum driveshaft mates the automatic transmission to a beefy Currie 9-inch Ford rear with 31-spline axles and 3.50 Posi gears.

Larry Jaworske, a founding member of the Sarasota Café Racers carguy lunch group,http://www.sarasotacaferacers.com/home.html sums up his latest ride: “It’s a tight build that starts immediately and runs cool. No squeaks or rattles. I can change exhaust from rumble to loud by swapping sets of headers. Happy to say that at 1,975 pounds, there’s much more power than needed!” His CALIFORNIA DREAMIN’: ’32 FORD joins an eclectic collection that includes a Rolls-Royce, Aston-Martin DB9, ’65 Stingray (327/365), Callaway SC757 Corvette and a Cobra Tribute.