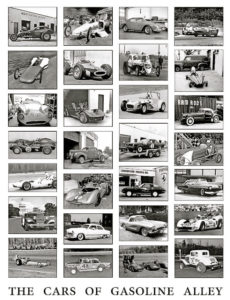 Cindy Monroe’s impressive volume, KENSINGTON MARYLAND’S GASOLINE ALLEY, began life, as of all things, a crime novel. Fortunately for historic motorsports aficionados, Monroe changed direction after a trip to a local historical society revealed there was a story even more intriguing. The book is about a place on the map in suburban Washington, D.C. that hid behind its humble appearance a place more prominent than one would initially assume. For it was there that “car guys” of all types gathered to perfect their crafts.

Among the body, trim and mechanics shops, below, was one very special car dealership that sold new Lamborghinis and used racing Ferraris. Countless individual racers and hot rodders occupied other spaces. Lines between racing genres blurred as everyone coexisted and even crossed over. During the week they toiled on their cars, before moving off on the weekend to one of nearly 40 racetracks that then populated a very different National Capital area.

Contained in over 400 pages and illustrated by more than 800 pictures, Monroe’s missive tells the story of people who did it for the love of the hobby and sport and not for any fame or promise of riches. Between its covers, KENSINGTON MARYLAND’S GASOLINE ALLEY memorializes countless hours of interviews with those who lived it. The photos used are often from the subjects’ own archives, rather than from some glossy PR mill. All are supplemented by documentation from newspapers and publications of the era.

Within the book, you will find racers and car builders you may be familiar with and cars many of us have coveted. Even for those not familiar with the D.C area car scene, you will be taken by the number of cars and drivers that we all “studied” in the grainy, B&W images in car magazines of the day. So varied were the Alley’s offerings, that there is something for everyone in the book: midgets, stockers, customs, hot rods, sports cars, drag racers and so on.

Monroe states early on in the book that she’s not a car guy, usually a harbinger of a poorly told automotive story. But she more than overcomes her self-proclaimed lack of car cred by presenting a meticulously researched, scholarly work marked by countless appendices, notes and indexes. Unlike many attempts to tell racing stories, this production is first rate. But somehow through all of it, you get the impression the people whose stories she told were important to her and Monroe wanted to do it right. Her newly acquired car guy cred manifests itself in a chapter with a heart-felt and highly emotional story about her late brother, told as a real “car guy” would tell it. She chronicles the story using a timeline of cars he had owned.

KENSINGTON MARYLAND’S GASOLINE ALLEY is a self-published work. It represents a labor of love by someone who felt a personal stake in conveying history. She is to be applauded for doing a superb job, making the reader feel like he or she was part of that unique community. Todd Pendleton, a former member of the area’s Ram Rods hot rod club, crafted the cover, below. 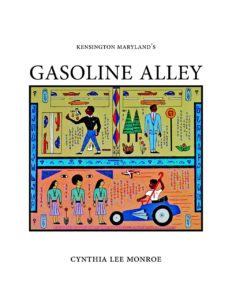 More information and ordering details can be found at, https://thealleybook.com/