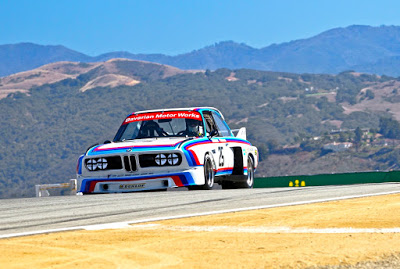 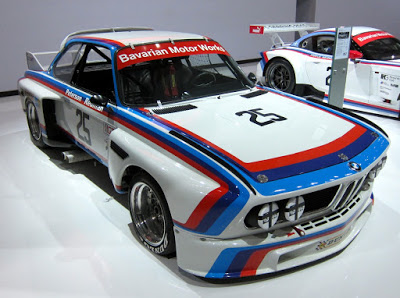 Three BMWUSA Classic racecars will run in the Motorsports Reunion at Mazda Raceway Laguna Seca on August 13-16.  Entries include the famous No. 25 BMW 3.0 CSL, BMW M1 IMSA Group 4 endurance racer and the BMW M5 IMSA Bridgestone Supercar Championship 1994-95 winner. Fans and media are encouraged to follow along on Twitter @BMWUSAClassic.

The No. 25 BMW 3.0 CSL Group 4 celebrates the 40th anniversary of winning the 1975 12 Hours of Sebring. This 3.0 CSL is one of five BMW Motorsport chassis built and campaigned in North America in the 1975 & 1976 IMSA Camel GT Series in Group 4 and 5 specifications. Campaigned under the racing numbers 24 and 25, the CSL enjoyed considerable success, winning at Sebring, Riverside, Daytona and Talladega and at Laguna Seca in 1975. At the Rolex Reunion, the BMW 3.0 CSL No. 25 will be driven by BMW of North America President and CEO, Ludwig Willisch. Willisch will run in Group 4A:1973-1981 FIA, IMSA with races on Saturday, August 15th. 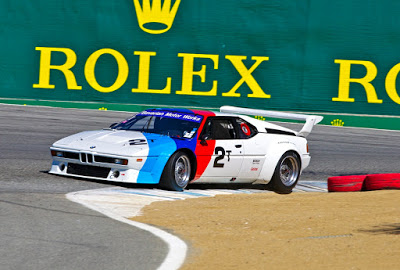 The second entry is the No. 2 BMW M1 IMSA Group 4 that was campaigned by BMW of North America at the 24 Hours of Daytona and Mosport during the 1981 season and driven by David Hobbs, Mark Surer, and Dieter Quester.

As racing regulations evolved in the mid-1970s, BMW Motorsport saw an opportunity to challenge arch-rival Porsche in a new racing series by designing and manufacturing a purpose-built racecar and a street version for sale to the public, as stipulated by the rules. The BMW M1, designed by Giorgetto Giugiaro and powered by a Paul Rosche-designed, mid-mounted 3.5-liter, twin-cam M88 Six engine, debuted at the 1978 Paris Auto Show.

However, development and production delays with outside contractors caused its appearance to coincide with the demise of the racing formula for which it was created. The quick thinking solution was the fast and furious ProCar Series that preceded European Formula 1 races.

A few of the M1 ProCars were imported to the US, modified for endurance racing and successfully raced in the popular IMSA GTO Series. BMW of North America only entered its M1 IMSA Group 4 in the longer races of the 1981 season as the company’s racing program shifted focus to the new M1/C prototype for the shorter races. This M1 IMSA Group 4 (Chassis No. 4301223) was the spare car for the BMW of North America team and appears to have seen limited racing action. The No. 2 IMSA Group 4 M1will be driven by Time Inc. auto tester, Jason Harper. Harper will also run in Group 4A with Willisch in two races on Saturday, August 15th. 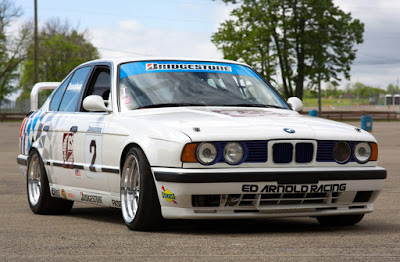 The final BMW entry in the annual event is the BMW M5 IMSA Bridgestone Supercar champion from 1994 and 1995. The IMSA Bridgestone Supercar Championship featured the great cars of the mid-1990 in a sprint-racing format. This BMW M5 topped Porsche, Nissan, Lotus, Corvette, Ferrari and Mazda, among other “supercars” of the day. The engine uses the basic components from the production unit while Zytec Engineering, working with BMW Motorsport, tuned it. It is the last generation of this engine design, first seen in the 1975 3.0 CSL and the M1 Procar.

David Donohue, son of legendary American driver Mark Donohue, won his first professional racing championship behind the wheel of this BMW M5 in 1994. Prepared by Ed Arnold Racing, of Oaks, PA, this car was never sidelined by a mechanical failure. Winning or finishing second in all but one of eight races, Donohue won the IMSA Bridgestone Supercar Championship. BMW won the manufacturers crown. David Donohue is re-united with his car for the Rolex Monterey Motorsport Reunion. Donohue will run in Group XX in two races on Saturday, August 15th.

Check out all the details of the 2015 Rolex Monterey Motorsports Reunion, http://www.mazdaraceway.com/rolex-monterey-motorsports-reunion