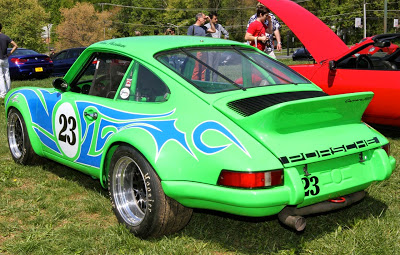 Marking its 32nd year, the Deutsche Marque Concours d’Elegance has become a staple on the National Capital Area’s Spring car event schedule. Put on by the local chapters of the BMW, Mercedes and Porsche car clubs, the Concours crowds the show field at Nottoway Park in Vienna, VA with all manner of German automotive finery. The Porsche “Outlaw” row contained some interesting variations on the Porsche theme, including Alan Friedman’s ‘73 911RSR. The paint color shocks the retinas and the “Hippy” paint job adds a lot of visual interest. The ducktail rear spoiler, straps on the rear window, wide wheels & tires and numbering leave little doubt that this is a purpose built vintage racer. 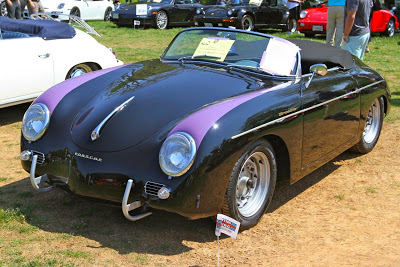 In this era of over-restored cars, you have to like Littlejohn Schebish’s Speedster. Originally a racecar, it was found with missing parts and in poor condition. Schebish has elected to keep its flavor as a 1960s street racer with colorful paint accents and nerf bars. 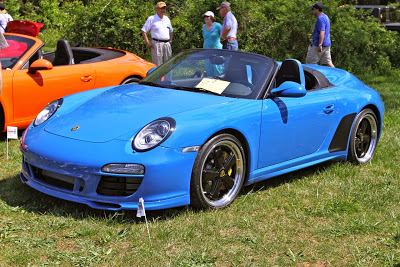 Thought it might be an interesting comparison between the Speedster in the last photo and a shot of Chip Tsantes’ ‘11 911 Speedster.  You can see similarities in the smaller windshield and the tonneau cover. But after that, Porsche takes departure from the original concept of a small, light, minimally appointed car. It would be interesting to see how close Porsche could come to the spirit of the original Speedster in a modern car. 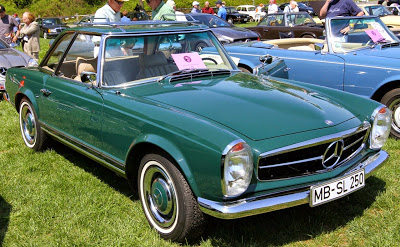 Pagoda Roof Mercedes SLs draw their name from the slight concave shape of their hardtops. Built from 1963 -1971, the cars evolved along the way, gaining power and coming into compliance with U.S. safety regulations.  Raymond Schlicht’s SL was originally delivered in Germany. It has the more unusual five-speed manual gearbox and he pointed out that it’s a coupe model that came with a hardtop only and a small rear seat. 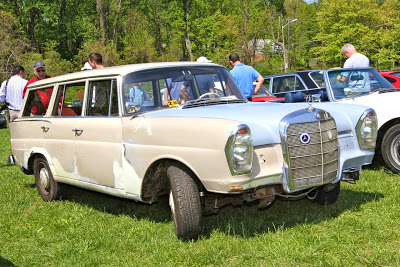 For a moment I thought the Rat-Rod movement had arrived in the Mercedes camp until I learned more about this ‘67 M-B Universal. A W111 chassis or “Twin Fin”, these station wagons were built by an outside supplier on  chassis supplied by Mercedes. Despite its obvious flaws, this one likely will get restored. 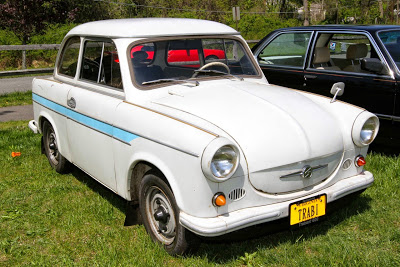 And here we have the pride of Communist East Germany, the Trabant. Powered by a two-cylinder, two-stroke 26 horsepower engine, East Germans stood in line to procure one. They stand as a monument to the power of central planning. The owner, George Newman, said there are several that gather every year on the anniversary of the fall of the Berlin Wall (November 8) at the Spy Museum on F Street in Washington, D.C. 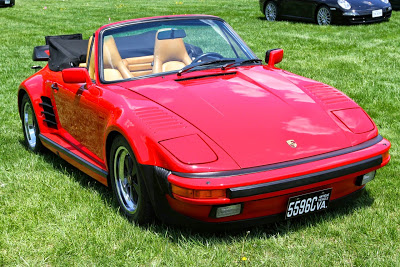 This one really threw off a “Miami Vice” vibe with its rear quarter panel strakes, flashy red paint, slant nose with disappearing headlights, flared fenders, whale tail and extended rocker panels. Being a cabriolet just adds to the 1980s feel. Called a Flachbau or slant-nose by Porsche, it was an expensive option costing over $20,000 when new. 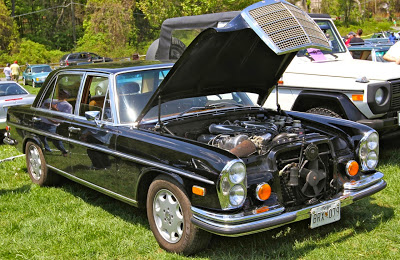 The Mercedes 300 SEL 6.3 followed the muscle car idiom of putting a big engine in a small car. In this case it was the 6.3 liter M100 SOHC V8 from the 600 limousine into the W109 chassis. Well equipped with a four speed automatic transmission, four-wheel disc brakes and air suspension, its performance rivaled that of a lot of musclecars. 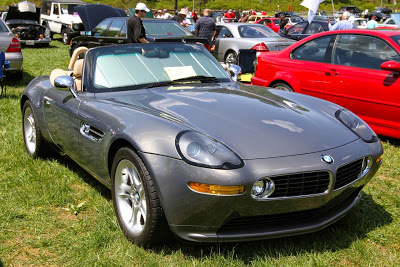 BMW built its Z8 as a tribute to the 1950s BMW 507 Roadster. The styling influences can be seen in the Z8’s grille shape and placement of the fender vents. Based on a Tokyo Auto Show concept car called the Z07, it came to production relatively intact design wise. An aluminum body and chassis combined with a 400 horsepower V8 borrowed from the M5 provided for one very spirited ride. A Z8 would achieve exposure on screen in the James Bond film The World Is Not Enough. Doug Dolan owns this example. 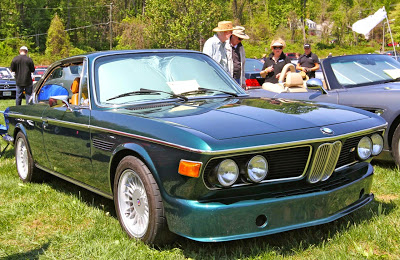 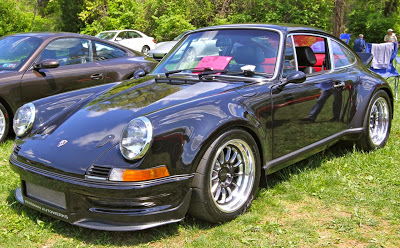 A little way down the “Outlaw” row sat Dave Bergman’s ‘73 Porsche 911E. It had the same flavor as Friedman’s racer but with full street equipment. The overall level of fit and finish was very high in tribute to his vocation of running Bergman Autowerks in Manassas, VA.