Racing historian Mike Matune represented the CarGuyChronicles at the Simeone Museum’s BIRTH OF THE FORD GT40 Seminar, and produced this feature. 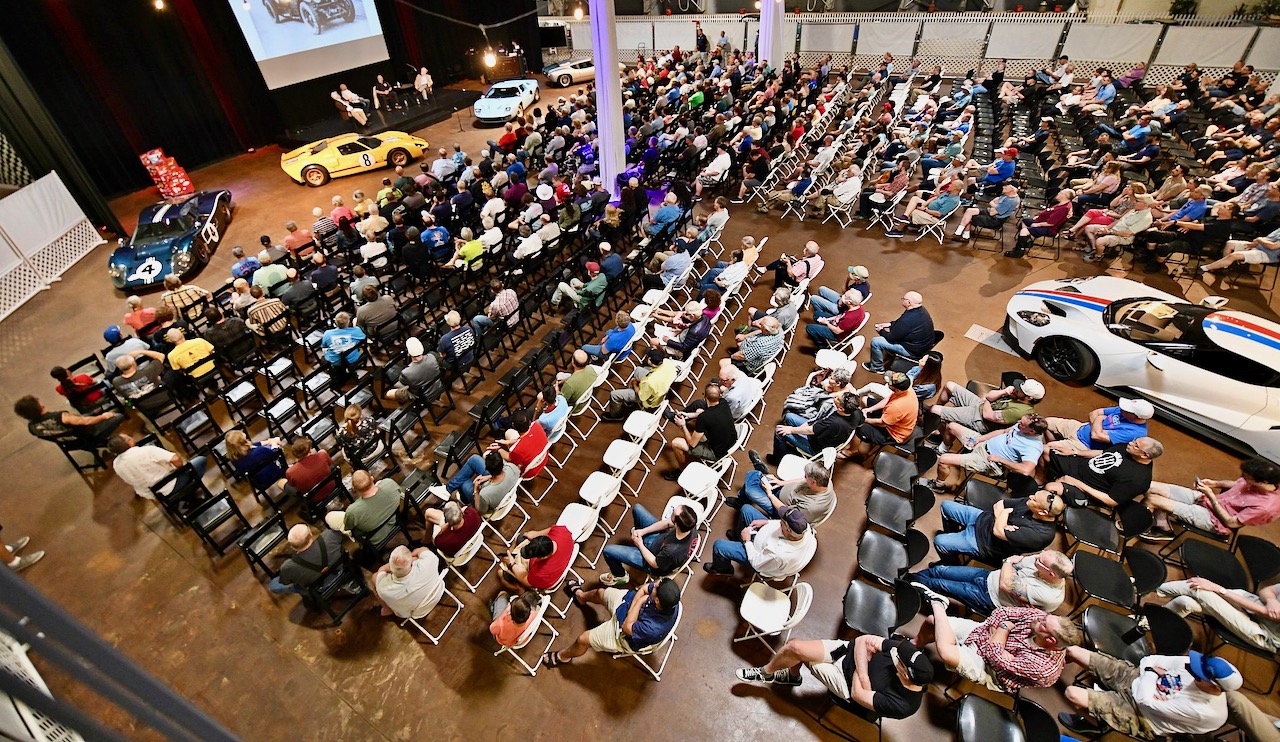 For an oft-talked about and much analyzed subject like Ford’s iconic GT40, the amount of interest that it still elicits is amazing. A full-house crowd filled the Simeone Foundation Automotive Museum near the Philadelphia, PA airport to hear a panel of renowned GT40 aficionados bring the GT40’s history into sharper focus. 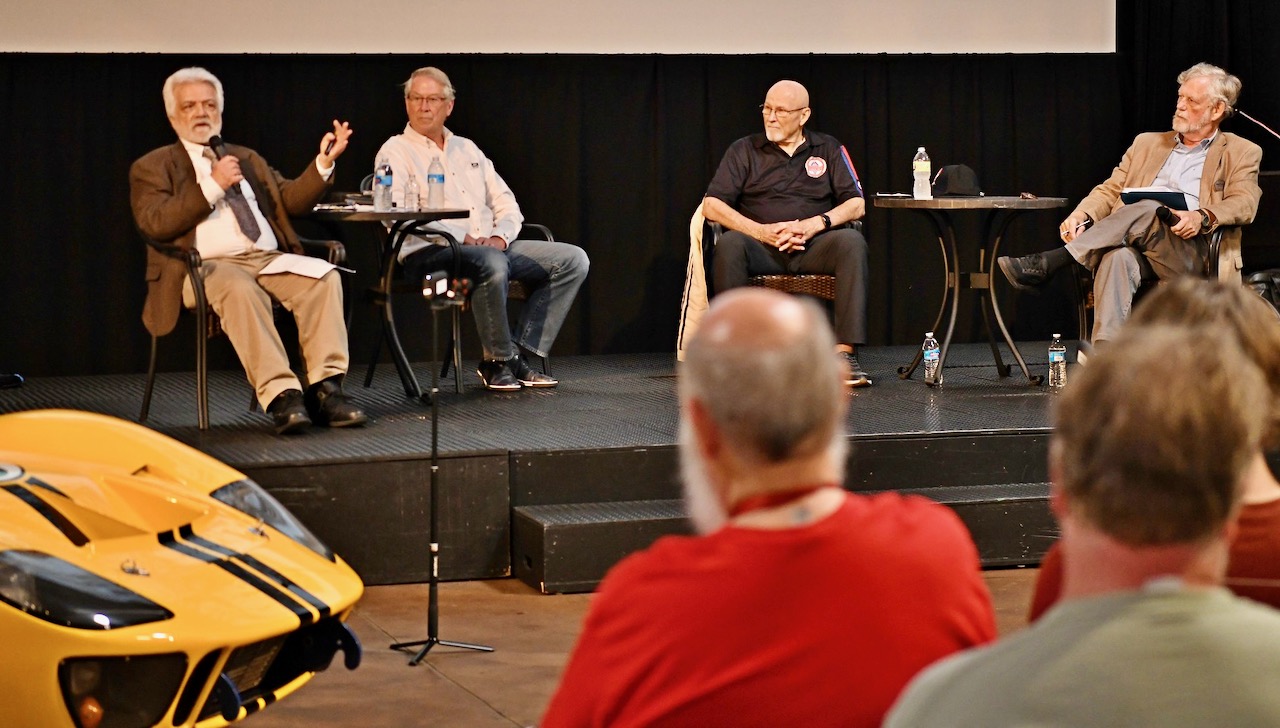 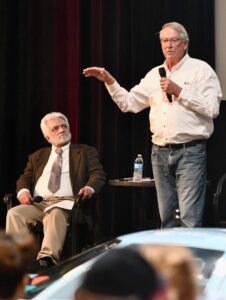 Gathered on the stage, were (L to R) Janos Wimpffen author (Time and Two Seats) and authority on sports car racing, Mike Teske, author (Ford Racing Century), archivist, and creator of the continuation Kar-Kraft/Ford Mark IV and Allen Grant, Shelby American driver. The entire event was ably moderated by Harry Hurst, author and curator of the Glory Days of Racing Facebook Group. Janos Wimpffen (forefront with microphone) kicked off the seminar by setting the stage for the world of international sports car racing Ford entered in the 1960s.

Then Mike Teske, right,  told the story of Ford’s ill-fated efforts to buy Ferrari and their subsequent approaches to English racecar constructors Lotus, Cooper and Lola. Mike’s presentation was backed up by rare documentation from his personal archives. And as if that wasn’t enough, in front of the stage were Allen Grant’s Lola Mark V1 GT and Benjamin Levy’s race-spec, road-worthy GT40 P/1030, below, (originally used by Ford and Shell Oil for advertising, never raced) along with the Simeone Collection’s Alan Mann lightweight XGT-1 (GT40 Mark II) and Ford Mark IV Chassis # J-8). To the back of the lecture area were numerous examples of the First (2005-2006) and Second (2017-2022) generations of the modern Ford GT. 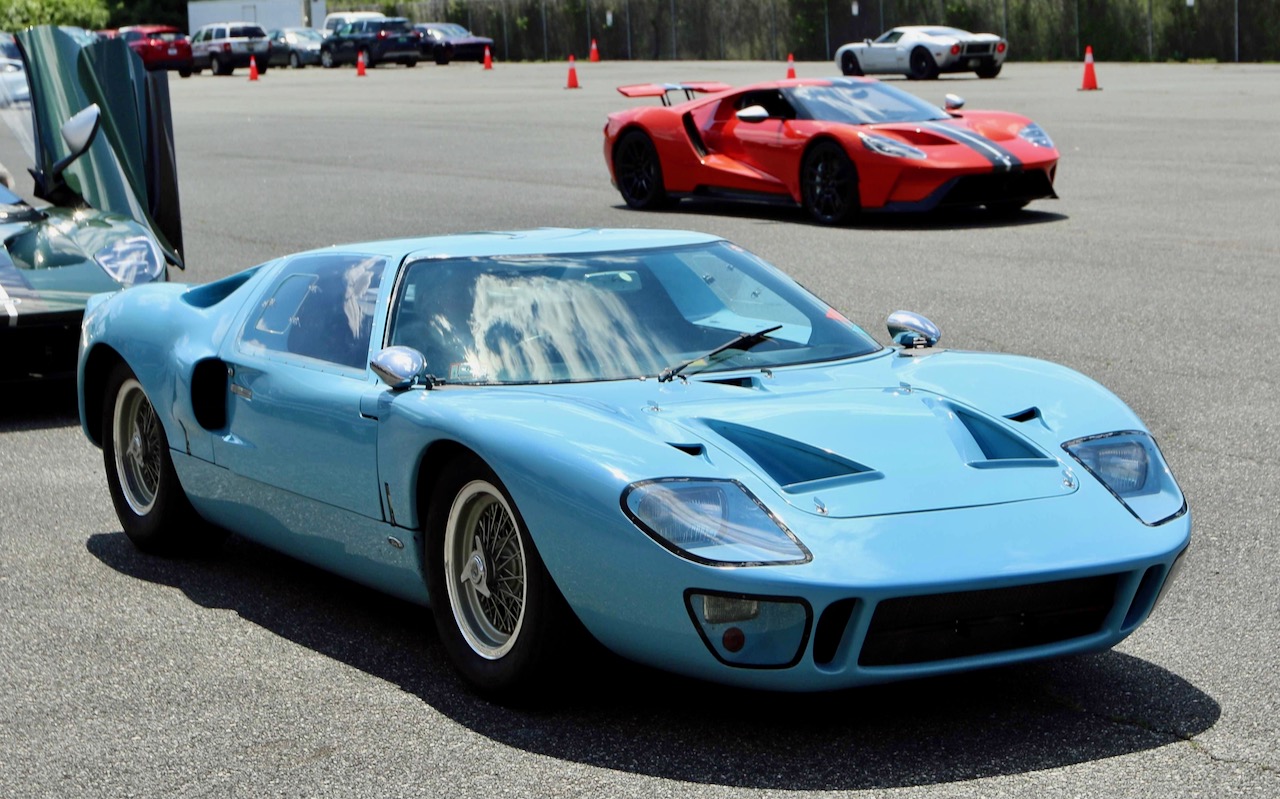 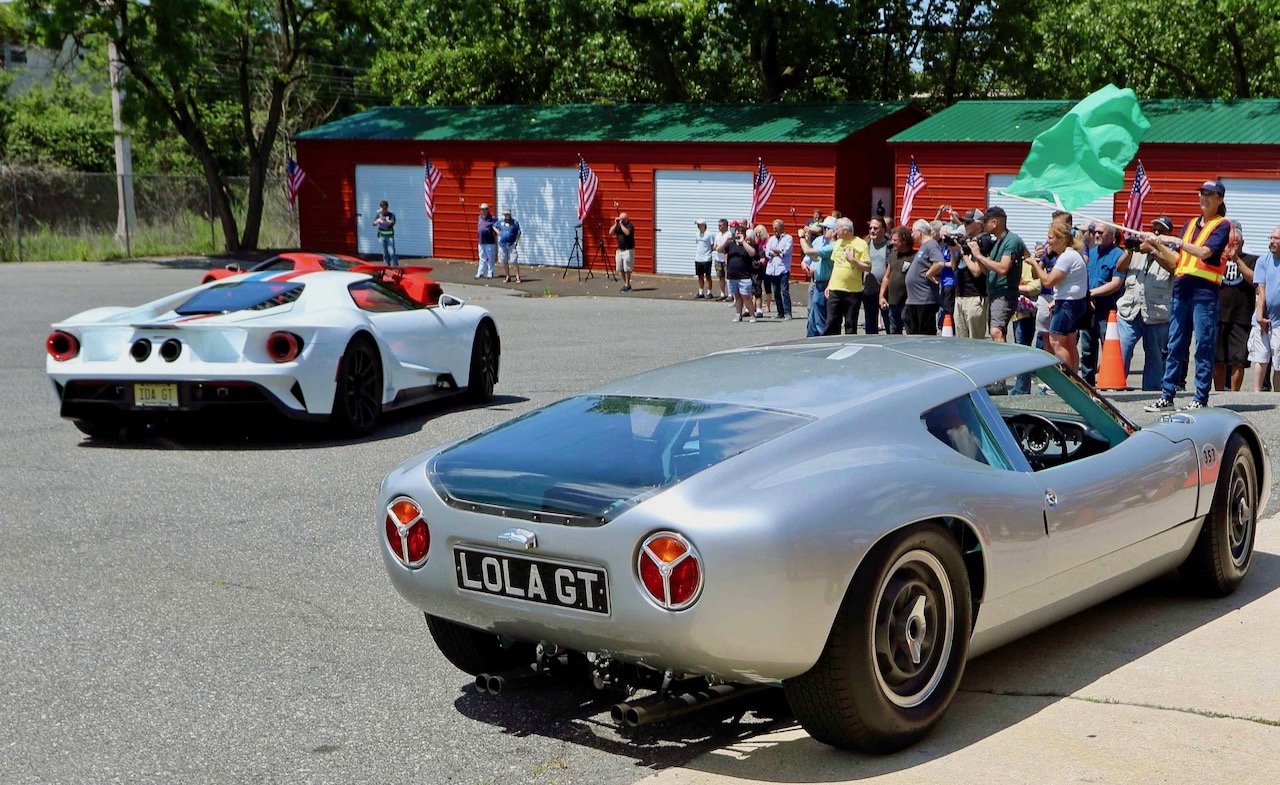 After the BIRTH OF THE FORD GT40 presentation portion of the Seminar, all the cars were exercised behind the museum. In the background flags and lights indicate all is green! On “track” and separated by some 60 years, Alan Grant’s Lola Mark VI GT waits to rejoin the fun as a Second-Generation Ford GT moves past. To some the Lola is the basis for Ford’s subsequent efforts, to others merely the inspiration; either way, it was an important benchmark along the timeline of the original Ford GT/GT40. 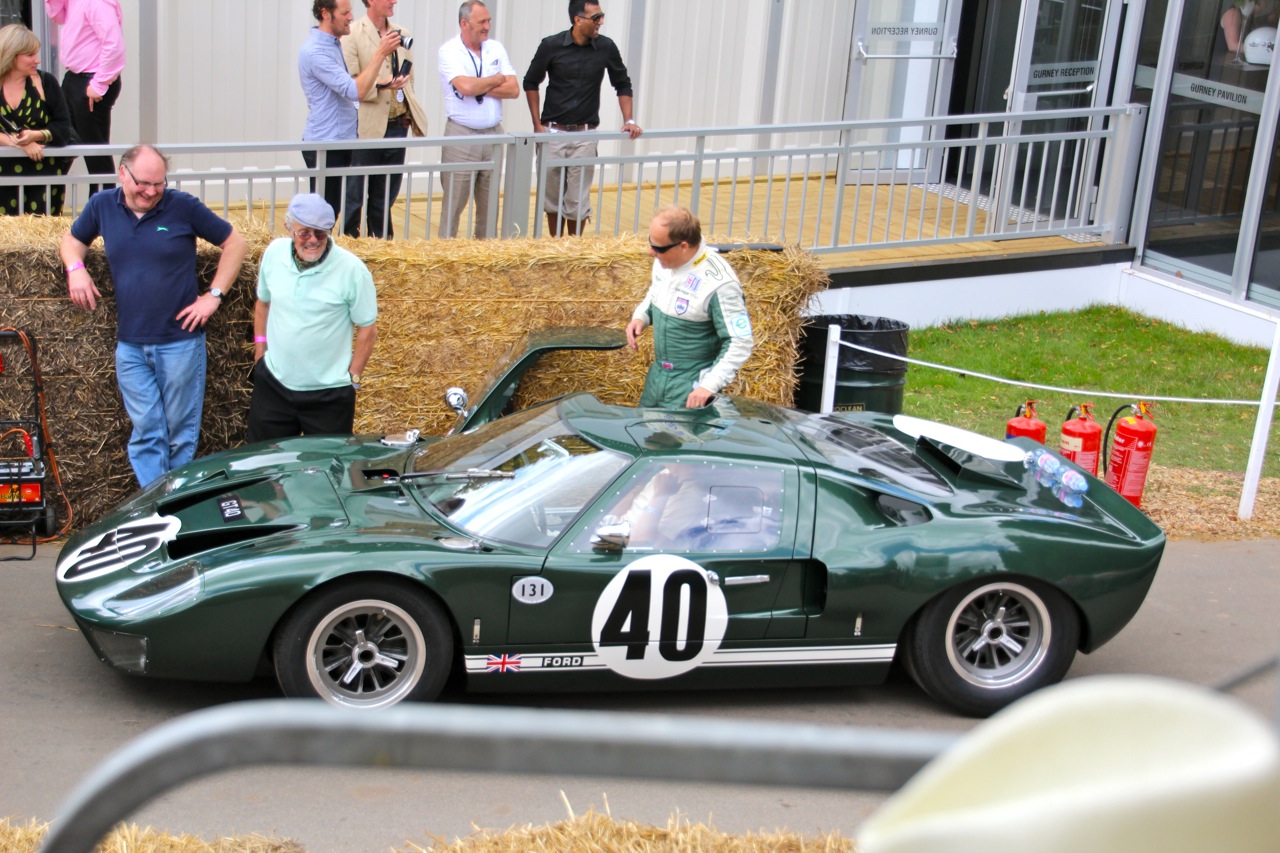 In short order, Ford’s Roy Lunn who had been responsible for the Mustang 1, took four building blocks (the Mustang 1 suspension, Indy car engine & Colotti transaxle and Ford Styling’s body shape) and created the Ford 1964 GT. Quickly the development cycle pushed the Mark 1 forward. The original body-shape would be refined to better address aerodynamics. Borrani wire wheels would be replaced with Halibrand cast wheels and powerplants shifted from the 255-inch aluminum Indy small-block to the race-prepped, production-version cast-iron 289, but still with four 48 IDA Weber carburetors. 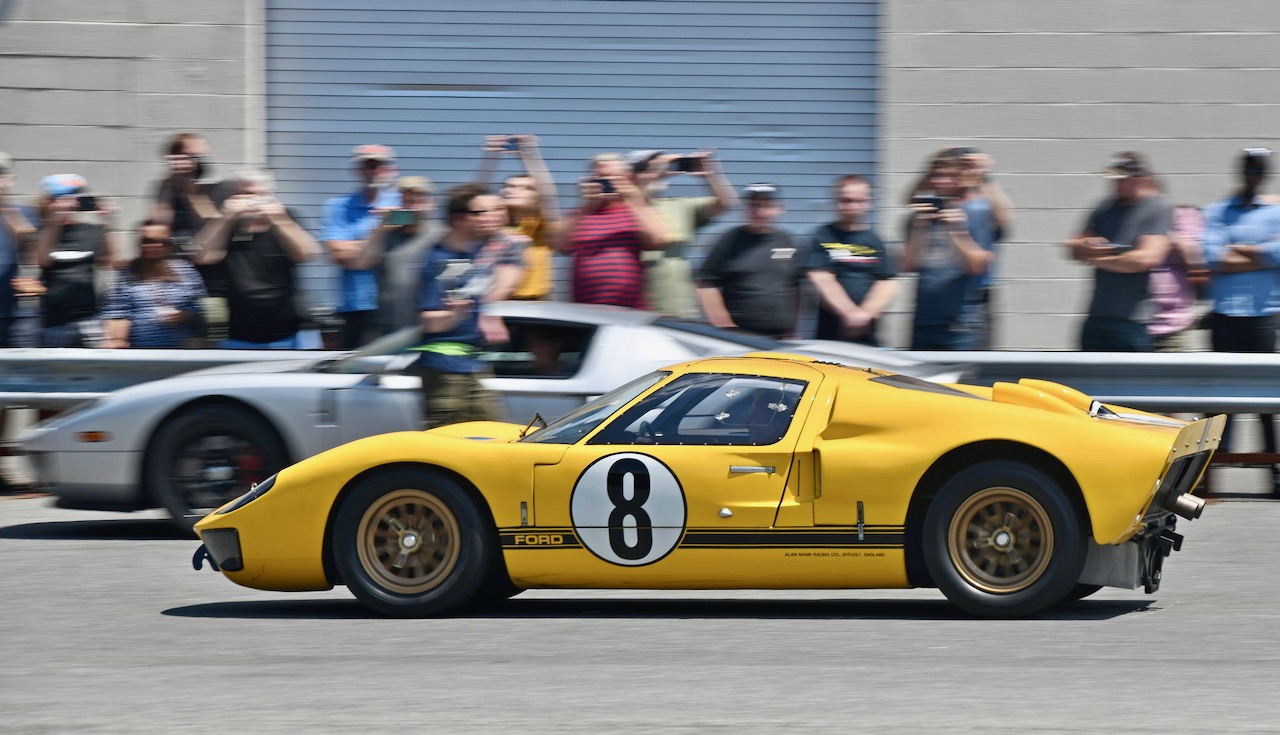 But racing never stands still and Ford realized they would have to improve the GT40’s overall power to weight ratio to gain a competitive advantage. Enter the Ford GT40 Mark II. Among its advancements were an aluminum-head Ford 427 backed by a Kar-Kraft transaxle, and the resulting chassis modifications to bring it all together. 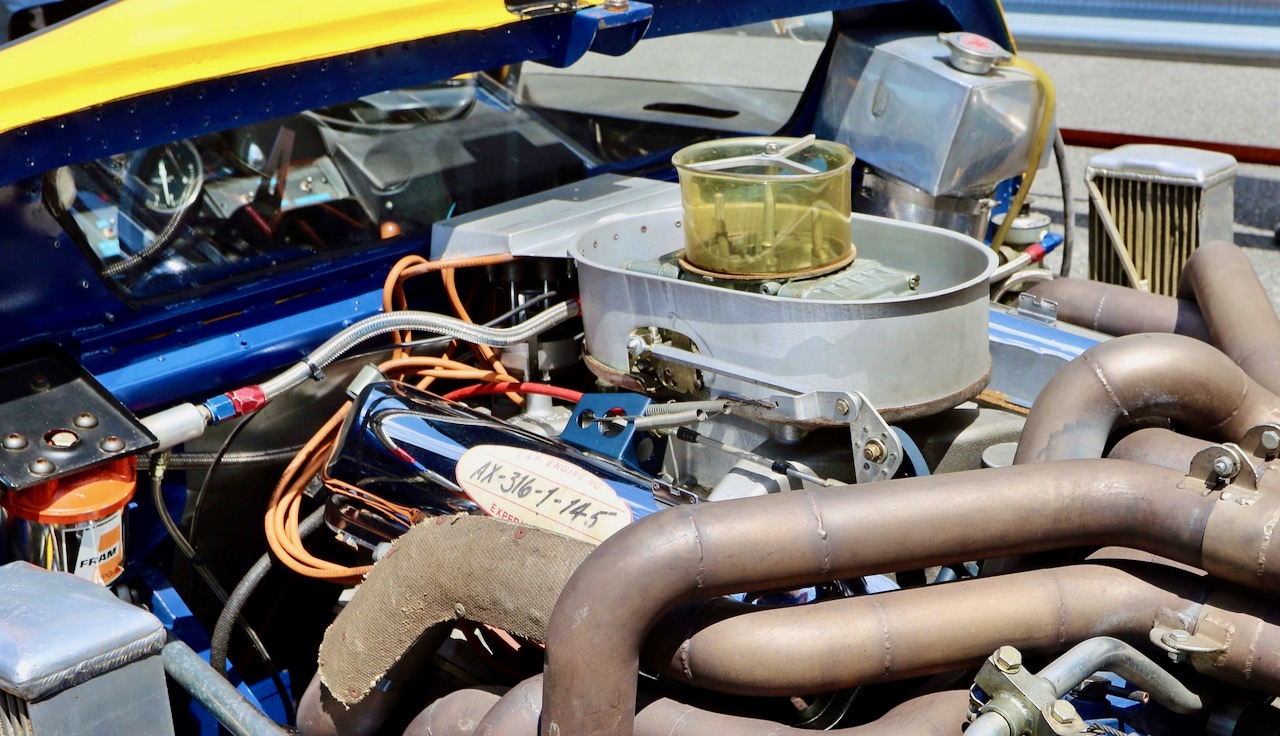 Long proven in drag and stock cars, the 427 fills the engine bay of the Simeone Collection’s yellow (Alan Mann Racing) XGT-1. Topped by a familiar Holley four-barrel and utilizing an impressive “bundle of snakes” exhaust system, it raced in the fabled 1966 Le Mans contest where Ford scored an impressive 1-2-3 finish. In answer to a question during the BIRTH OF THE FORD GT40 Q&A, the panel acknowledged the race’s controversial finish, but concluded it was accurate based on the rules in effect at the time and a thorough analysis of all available documentation, including lap charts and timing paperwork from ACO/Le Mans, IBM and Shelby. 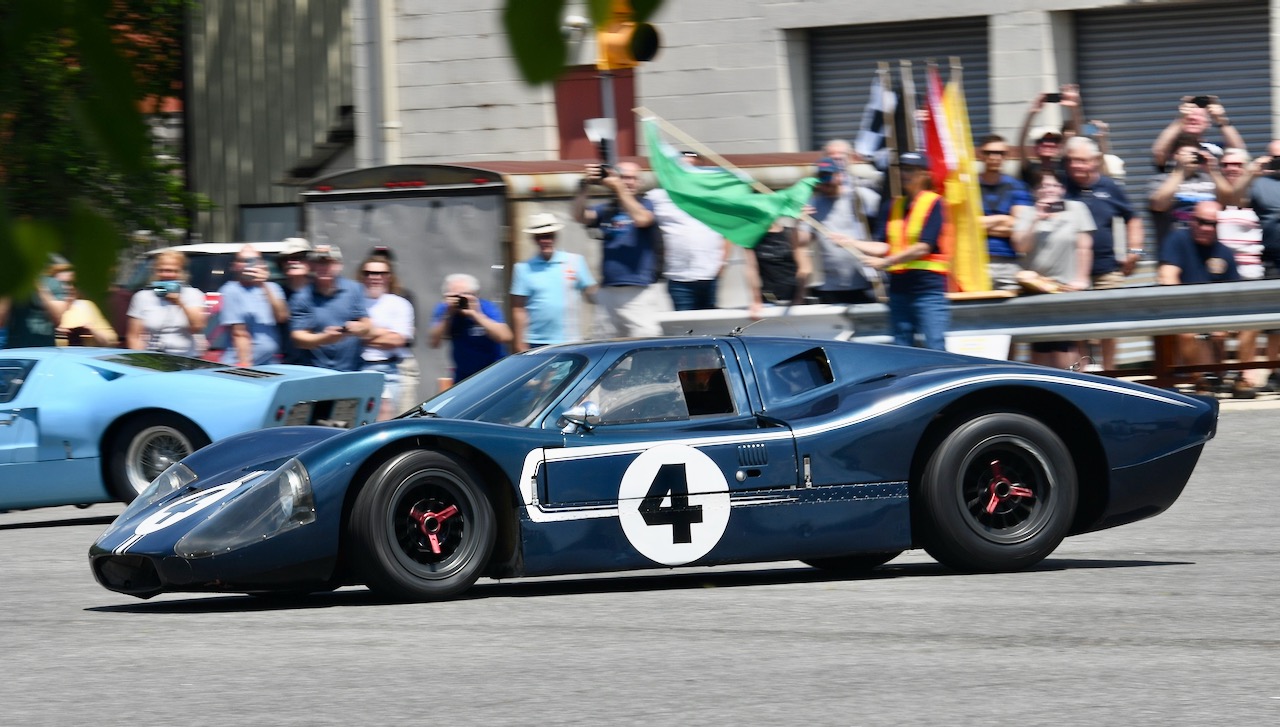 What could top Ford’s 1966 domination at Le Mans, quite simply, why another victory in 1967 of course! This would be an All-American victory in the new Ford Mark IV. Dan Gurney and A. J. Foyt came home first in the car constructed by Kar Kraft, Ford’s Detroit-based “Skunk-Works”. 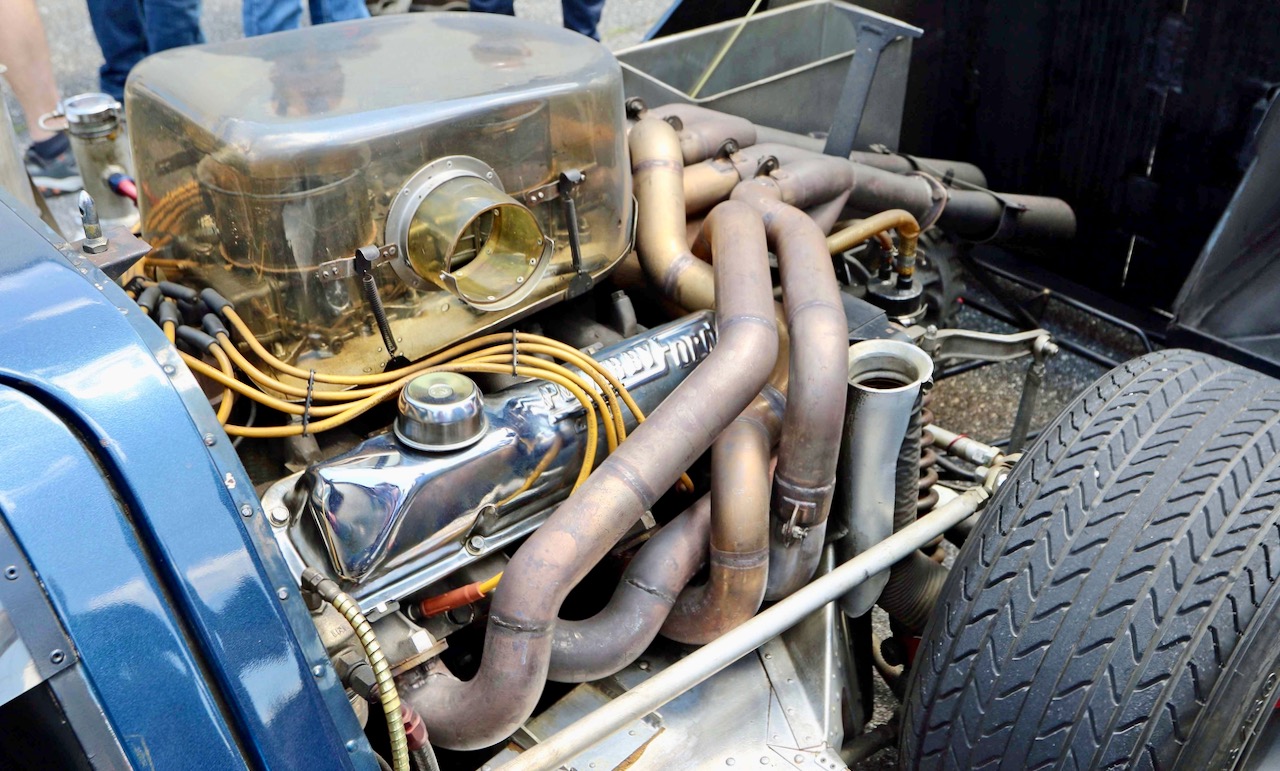 The Mark IV also featured a Ford 427, considerably improved by the use of aluminum Tunnel Port heads and intake manifold with a pair of Holley four-barrels. A Kar-Kraft T-44 four-speed transaxle completed the powertrain, same as used in previous year’s Mk IIs.  Simeone’s blue J-8 was the last Mark IV built at Kar-Kraft, with the final four chassis set aside for other projects. The Mark IV platform was all-new, constructed of lightweight honeycomb aluminum in place of sheet steel and aluminum. This Mark IV was raced at Le Mans in 1967 by Holman & Moody, but did not finish the race.

It would prove to be the end of the line for the Ford factory effort as rules changes limited engine displacement to five-liters, eliminating 427 racecars from competition. John Wyer’s “Gulf” GT40 (P/1075) would win two additional times in 1968-1969 before the curtain finally came down on the Ford GT40 at Le Mans.

For more information on the Simeone Foundation Automotive Museum, ranked #1 in the world, please visit https://simeonemuseum.org/