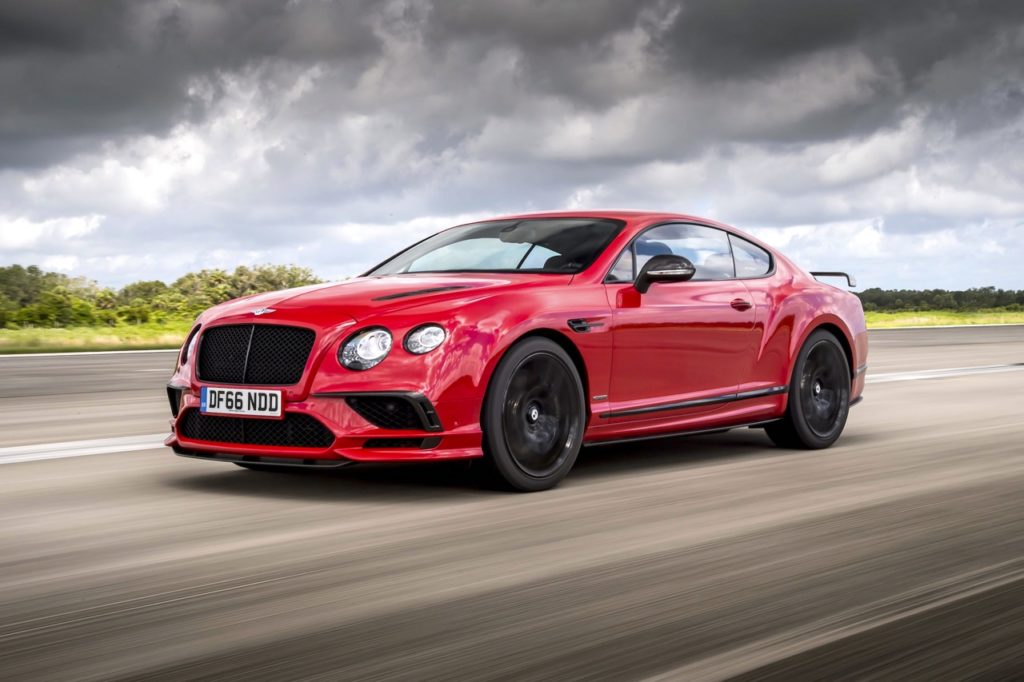 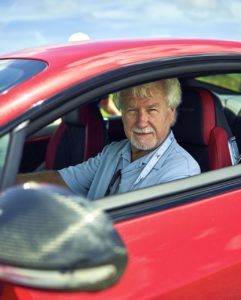 Ahead of us is 3.5 miles of arrow-straight concrete. But not just any old concrete. This is the historic Shuttle Landing Facility, part of the John F. Kennedy Space Center on Florida’s swampy Merritt Island. It’s here, between 1984 and 2011, where a total of 78 NASA Space Shuttles, with names like Columbia, and Discovery, Atlantis and Endeavour, touched down after their long free-fall glides from the stratosphere. No better place then to stretch the legs of a supercar with a claimed top speed of 209 mph.

The supercar in question is the ‘17 Bentley Continental Supersports, the fastest, most-powerful, most extreme Bentley ever created, and the car that owns the impressive badge of honor of being the fastest, four-seat production car on the planet. That’s pretty insane for a car that tips the scales at a hefty two and a half tons and has, at first glance, the wind-cheating aerodynamics of a cinder block!

But that’s what happens when you shoehorn an uprated 6.0-liter twin-turbo W-12 nuclear reactor packing a mighty 700 horsepower and 750 pound-feet of torque under its hood. We’re not here to set any new speed records, or to put to the test Bentley’s speed claims; even 3.5 miles of Kennedy blacktop isn’t enough for the Supersports to hit its 209-mph V-max. 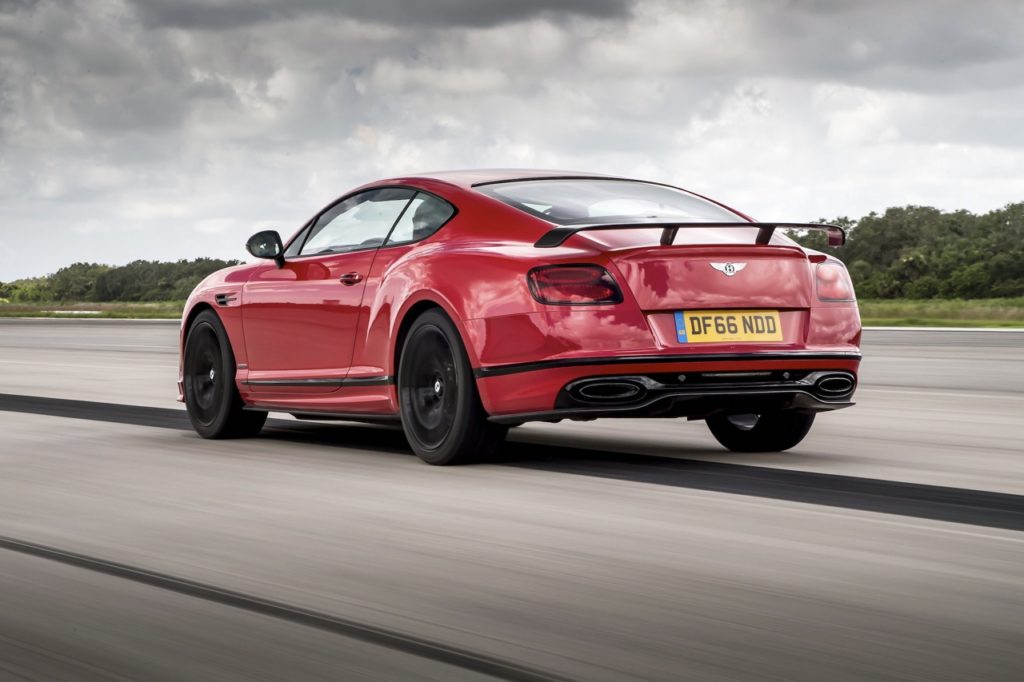 No, this is nothing more than a celebration of speed, a once-in-a-lifetime opportunity to drive a Bentley along this iconic landing strip, and for me, a chance to go faster than I’ve ever been before. At least in something that doesn’t have jet engines and serves peanuts and pretzels! But before we buckle-up and I get all nervous and sweaty, let’s take a stroll around this brute-force Bentley. It’s very much a limited edition, with just 710 being assembled for worldwide consumption, of which a mere 250 are destined for North America. Take your pick between the $293,300 Supersports Coupe, and $322,600 Convertible. 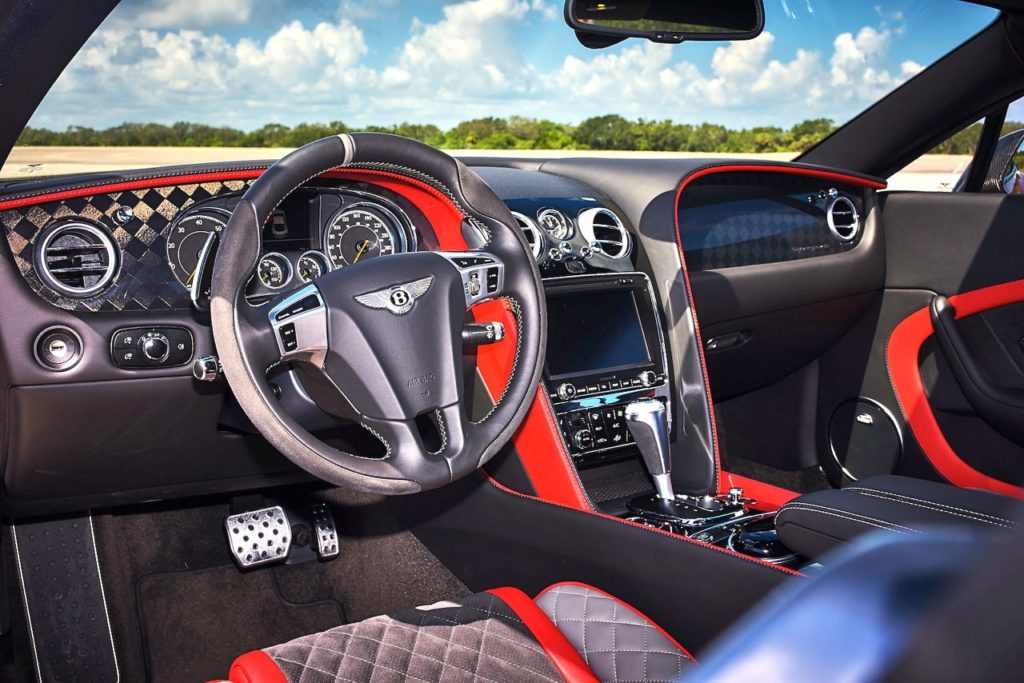 The car is a bit of a final hurrah for the current Continental GT, which is being replaced this September with a new-from-the-ground-up model that will be based, for the first time, on the latest Porsche Panamera platform. That should make it lighter, even faster and more dynamic than the current GT. We can’t wait. But that’s all in the future as the U.S. won’t see this new Conti GT until at least fall 2018. Gaze at this new Supersports in the metal – painted, in the case of our tester, a retina-searing shade of fire-truck red that Bentley fittingly calls Heartbeat – and your heart will definitely miss a beat.

Naturally it comes with more wings and body appendages than an F-18 fighter. The trunk-mounted carbon-fiber spoiler is big enough to perform wing walks on. Then there are carbon side-sills and gaping front intakes, carbon hood vents and splitters. Stick vinyl numbers on the doors and you could line-up on the front row of Daytona for the 24-hour!

Now take-in those gorgeous 21-inch forged alloys and, more important, the truly massive cross-drilled carbon-ceramic front rotors. At 16.5 inches in diameter, these are the largest rotors fitted to any production car today. The fact that they’re designed to withstand temps as high as 1,000 degrees C will no doubt come in handy as we get close to the end of the Kennedy blacktop. 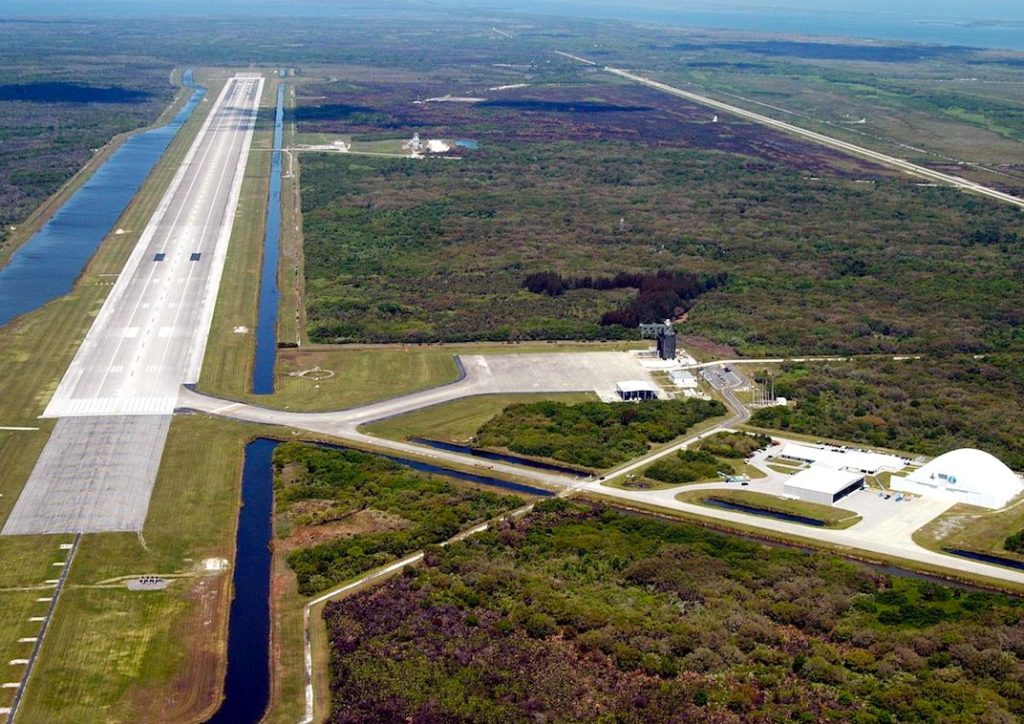 OK, I’m feeling the need for speed. Accompanied by Carl, my fearless Bentley driving instructor whose job it is to offer words of comfort and encouragement – and not panic – we roll to the northern-most end of the runway and turn 180 to point south. Ahead I see nothing but a shimmery, vision-distorting heat-haze rising from the superheated concrete. Mild terror sets in until my trusty partner tells me to aim for a barely-visible break in the line of trees four miles in the distance. And not, for one milli-second, take my eyes off it. 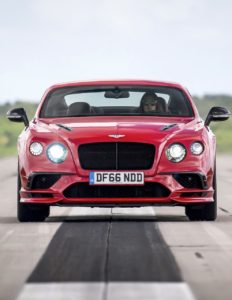 But Carl doesn’t do much for my comfort level when he tells me he has to get clearance from “mission control” before we go; seems they have to be sure there are no ’gators on the runway. At the last count, there were over 4,000 living in the surrounding swamps and they love to luxuriate on the toasty concrete. Hence the nickname for the runway – the ‘NASA Gator Tanning Facility’. Hitting one at 150-mph-plus doesn’t bear thinking about! Now we’re rolling. This thing can rush from standstill to 60 mph in a crazy 3.4 seconds and it feels it as the Supersports lunges forward on a towering tsunami of torque. And the surge doesn’t relent, squeezing you back into the hip-hugging, hand-stitched leather seat.

130…140…150. Heck this feels fast. My grip tightens on the wheel till my knuckles turn white. My eyeballs feel like they’re popping out of their sockets as they strain to see the all-important gap-in-the-trees. 160…170…180. Whoooa. The car does a little shimmy as a cross-breeze catches the car side-on sending my heart-rate skyrocketing and an extra squirt of adrenaline into my veins. Man, this feels seriously fast. I’m definitely out of my comfort zone here. 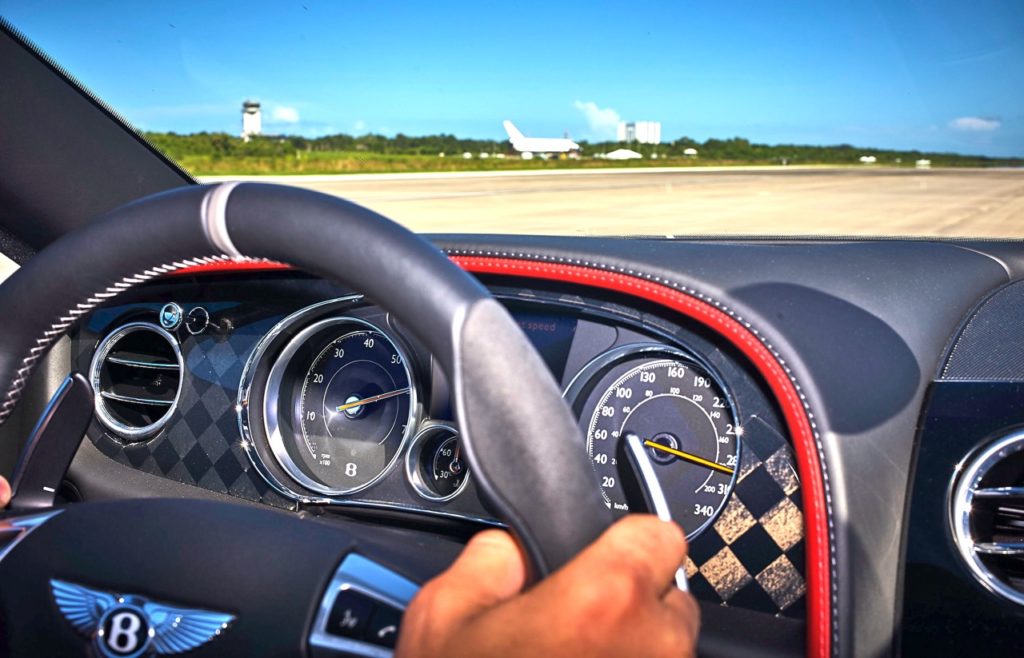 Now Carl is leaning towards me and calling out the velocities on the big Bentley’s speedo. “185..187..190..191…192…And then we’re done. He’s telling me “Off the throttle, and brake”.Out of my sightline, a big, red Slow sign at the side of the runway marks the start of the braking zone, ensuring the Supersports doesn’t end up in the swamp and Carl and I become tasty ’gator bites.

For the first time in what seems like an hour I take a breath and feel the bump-da-dump of my heart jack-hammering in my chest. What an experience. And, what a car. While I was sweating profusely, the Bentley was in its element; firmly planted on the road, balanced, poised, relaxed and eager to keep going towards its 209-mph top speed. 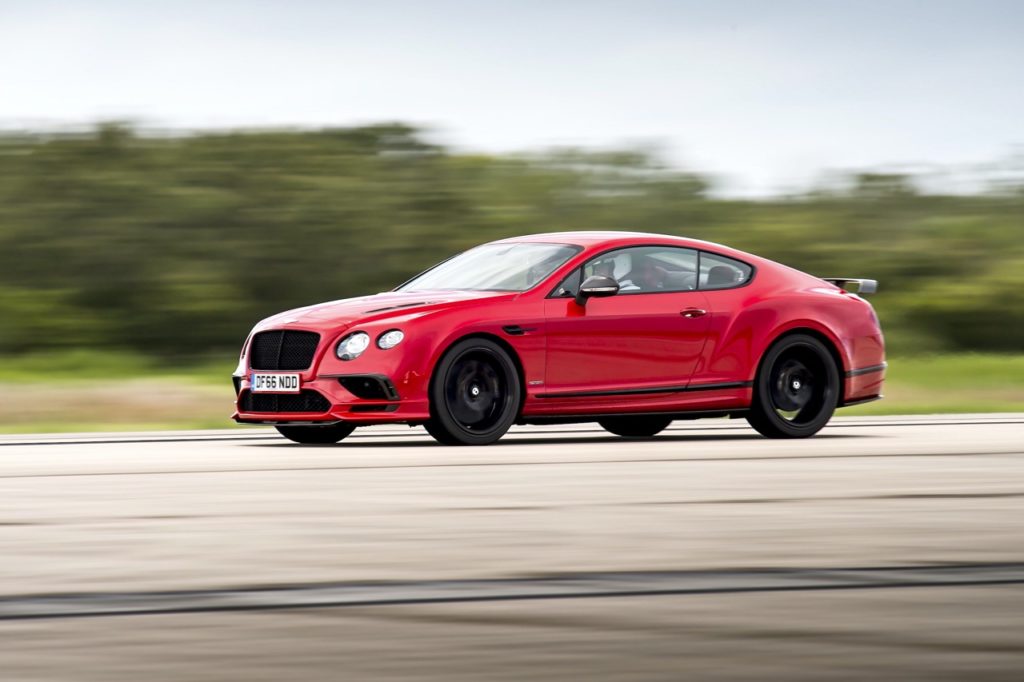 But One-Ninety-Two. I’ll take it!

For information on the latest luxury-performance vehicles from Bentley, please visit http://www.bentleymotors.com/en.html