Skip to content
The 1969 ‘Poster Car’ for Baldwin-Motion Camaros disappeared six months or so after delivery to Joe Oldham and never recovered. It’s Déjà vu all over again! 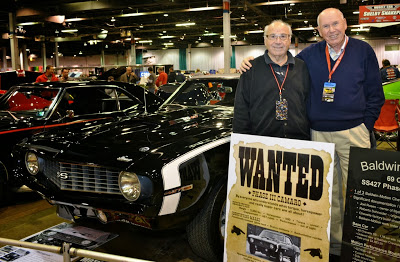 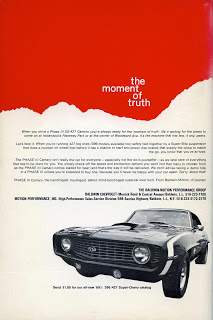 Hardcore Camaro enthusiasts at the Muscle Car and Corvette Nationals (MCACN) in Chicago last month did double takes when visiting the MOTION MADNESS III display. They stopped in their tracks when they saw the triple-black 500-horsepower SS427 ’69 Camaro and its owner, muscle car maven Joe Oldham. Could the car showcased on the iconic WANTED, the moment of truth and Outrageous! posters/advertisements, and graced the cover of the 1969 Baldwin-Motion Supercars catalog, have finally been recovered? Photo, above, with Joe Oldham at MCACN 2013. David Hakim photo.

The highest-profile Baldwin-Motion SS427 Camaro Baldwin-Motion built for the 1969 model year was stolen months after it was delivered and has never surfaced. After almost 45 years, Joe and son Scott finally built a Tribute, powered by a brand new 427 big-block, below, to the Camaro that I used for our 1969 advertising campaign. It was also on posters displayed at Baldwin-Motion booths at auto shows, including the International Automobile Show at the New York Coliseum, April 1969. 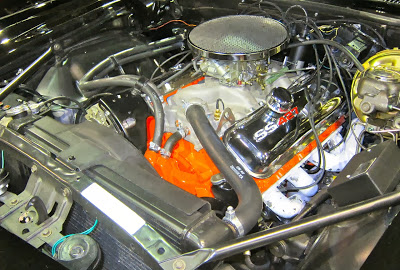 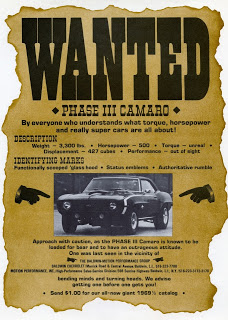 Engine, above, is a brand new ZZ427 crate engine from Chevrolet Performance which Joe dressed to look just like his original car’s L-72. Best known as the ‘WANTED’ Camaro,’ the traffic-stopping Tribute was revealed by Joe along with sons Scott and Steve at the special Baldwin-Motion/MOTION display. While at MCACN, Oldham’s Camaro won a “Pick Award” presented by the Wanderers Car Club and later had to turn down a second award since only one per car is allowed! Suddenly it’s 1969!

I drove and photographed my pal Joe Oldham’s triple-black SS427 Camaro before he took delivery in November 1968 and, even though it was stolen just months later, I used the photographs for all our 1969 Camaro advertising. The reason was simple: It had the right stance and evil look that we wanted to represent our top-of-the-line Gen I Phase III 427 Camaro. 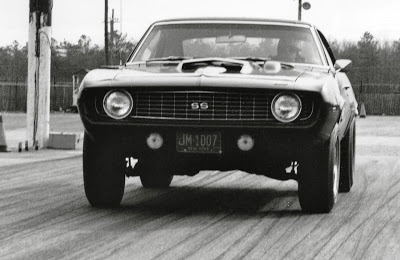 Shortly after taking delivery, Oldham returned to Motion Performance and had Joel Rosen remove the white hockey stick side stripes and install his favorite Keystone mags in place of its Torq-Thrust wheels, above. He also added a (Pontiac) hood tach, as it was the only one Rosen could find that would work with the Camaro’s optional Mallory black box ignition. 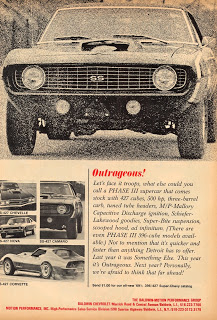 When the Oldhams built the Tribute Camaro, it was detailed exactly how it appeared in all our advertising: Hockey stick stripes, Torq-Thrusts and no hood tach. Joe’s plan is to return it to Day Three specs and the look he really loved.

There’s more information on Oldham’s Camaro, including a photo taken at Westhampton drag strip sans stripes and with Keystone mags and hood tach, in my book, MOTION Performance, Tales of a Muscle Car Builder http://www.motorbooks.com/books/Motion-Performance/9780760335383 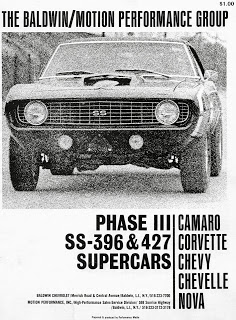 NOTE: Joe Oldham has been a friend for close to 50 years, dating back to when I was Editor of Hi-Performance CARS  and he was a feature writer, road tester and columnist.
Our sons continue the Oldham-Schorr heritage: Scott Oldham is Editor-in-Chief, Edmunds.com, Steve Oldham is a PR executive, Nissan-Infiniti; my son Stuart is Vice-President Communications & Public Affairs, Jaguar Land Rover NA.