Old Shel’ and Shelby American never touched COB/COX AC Cobras, but they are authentic Cobras. Here’s some history of AC289: COBRAS FROM ACROSS THE POND! plus a stunning example of a picture-perfect (COX) FIA Cobra. 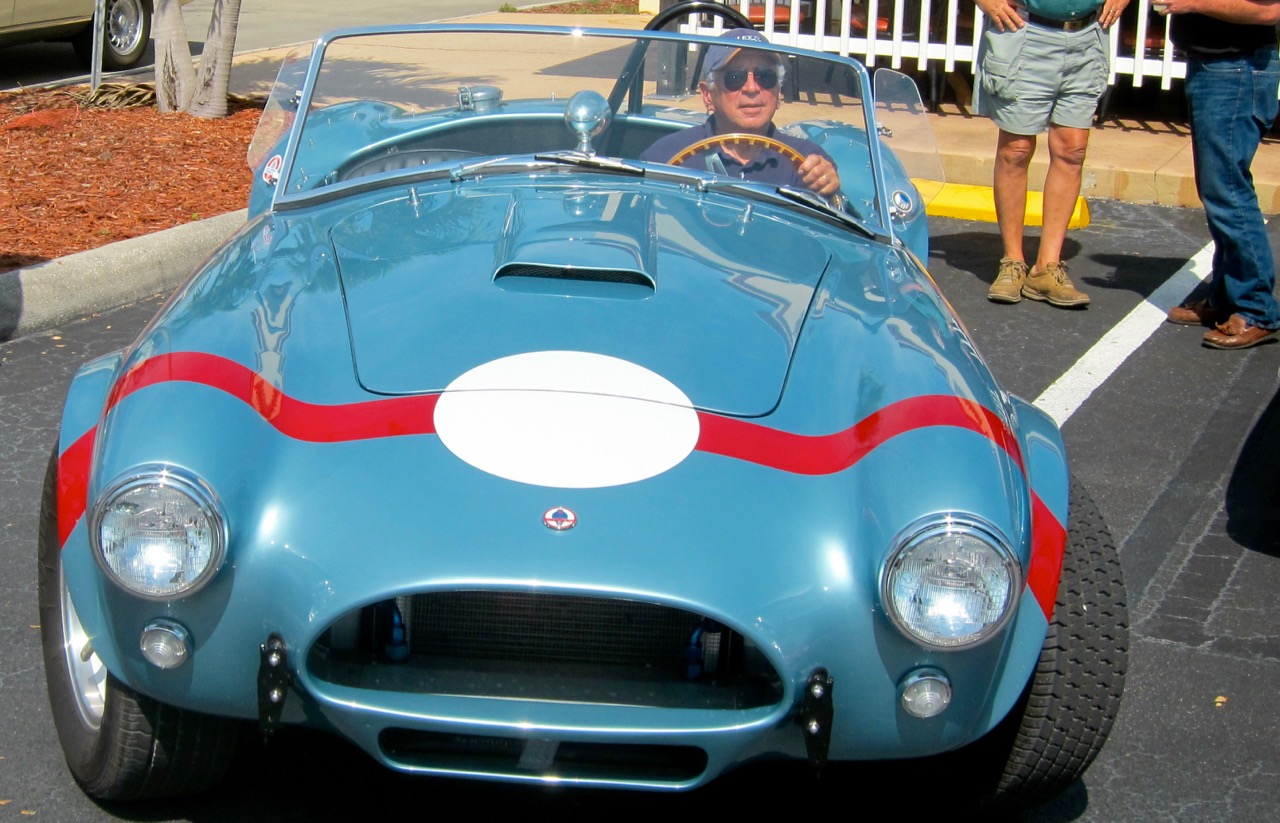 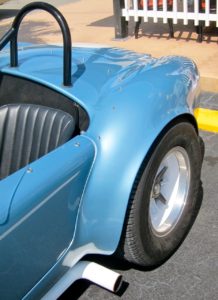 Carroll Shelby’s Cobras started life as AC Ace roadsters shipped from AC Cars, Ltd, Thames Ditton, Surrey, England to Shelby-American in southern California. Once in Shelby’s hands, they received Ford small and big-block engines and were finished to Shelby Cobra specs. In 1965 a new, improved coil-spring chassis designed with help from Ford, more aggressive styling and 427 and 428-inch Ford motors, changed the look and performance of the Cobra. AC shipped rolling wide-body-chassis to Shelby until the end of 1966.

Almost as soon as Shelby Cobra production started, AC Cars entered into a contract with Carroll Shelby that allowed AC to build AC Cobras, with 289 engines and four-speed transmissions supplied by Shelby, for distribution in the UK and Europe. AC289: COBRAS FROM ACROSS THE POND! were constructed in two versions: COB (CObra Britain) right-hand-drive domestic model and COX (CObra eXport) left-hand-drive export to Europe model.

The AC Cobra did not have “Powered By Ford” badges, but it had a Cobra emblem on its nose and an AC emblem on the deck. Total production was 62 cars – 45 COB and 17 COX models. Chassis numbers started at COX6001 that was built in October 1963. The last leaf-spring AC Cobra, COX6062, was completed in May 1965. After the end of leaf-spring Cobra production there remained an extensive inventory of leftover parts. They were used to assemble some cars after all AC and Shelby Cobra production ended. 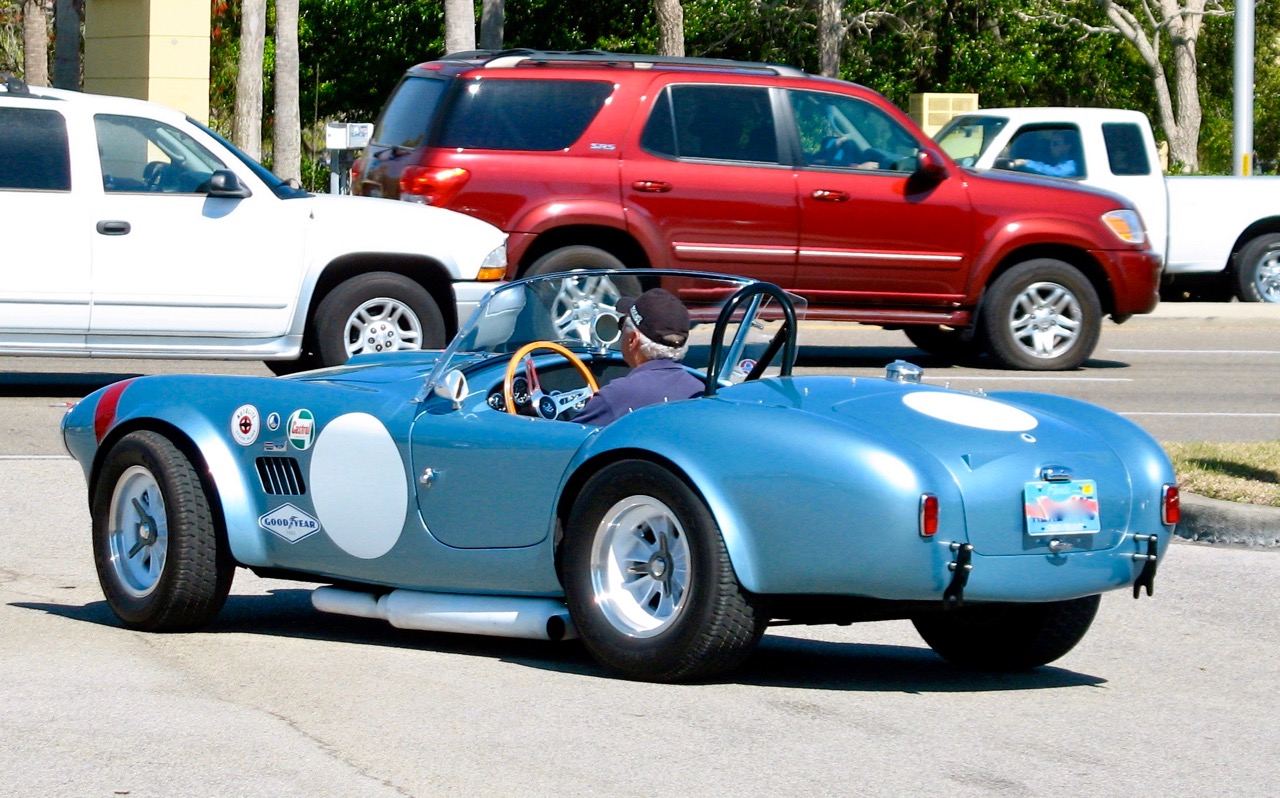 In 1966, AC Cars continued in the “Cobra” business and produced domestic and export AC 289 Sports in COB and COX trim. Unlike Shelby’s Cobras, the latest coil-spring chassis AC Sports did not come with a big-block engine, or with Cobra emblems or “Powered By Ford” badges. AC had little use for big-block engines because of high fuel costs and taxes and fees related to engine displacement in the UK and Europe. The combination of a high-revving small-block and much-improved chassis and suspension produced one of the most roadworthy, best driving Cobras. Out of a total of 25 AC 289 Sports built between 1966 and 1969, eighteen were RHD while just seven were LHD.

The wild cards were two unfinished leaf-spring chassis or, possibly, two reserved early chassis number plates. With 1965 chassis numbers, COX2610 and COX2620 appear to be sequenced with the end of leaf-spring Cobra production. The last small-block Cobra chassis produced for Shelby-America was CSX2602. It was the last of six Cobra Daytona Coupes and was invoiced on August 31, 1964. The 25 COB/COX coil-spring cars continued 6000-series chassis numbering, starting with COB6101. AC Cars produced two custom cars for John Willment Racing, built on leaf-spring chassis. The Willment Coupe was actually CSX2131 and the roadster, CS2131. 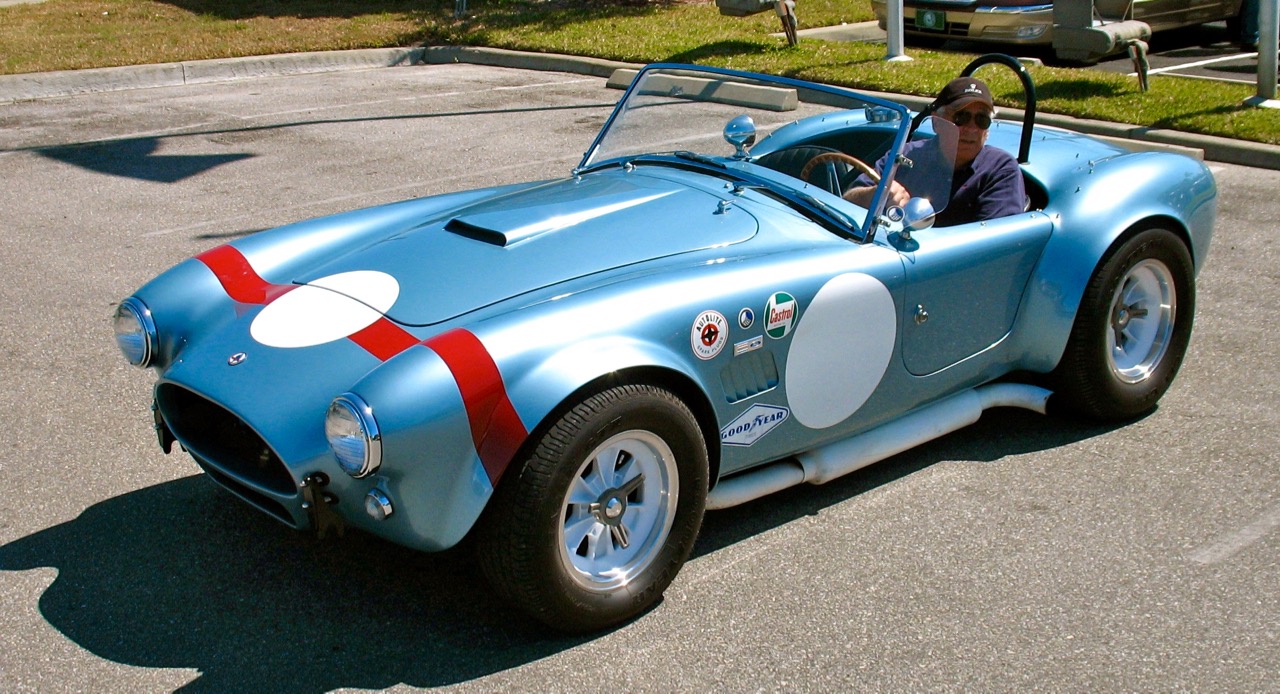 Correlating chassis and engine numbers, build dates and documenting cars from small, low-volume manufacturers is an age-old problem. I purchased a 1967 Iso Grifo new and it came with a “Manufacturer’s Statement of Origin” (MSO) confirming model year. It was powered by a Corvette engine that had been out of production since the end of the 1963 model year. And, factory records show that my Grifo was actually built during the 1966 model year! 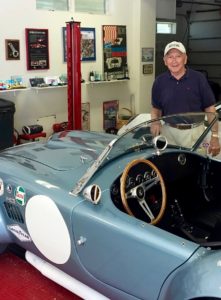 Archie Urciuoli owns COX2610, a striking, Viking Blue FIA-bodied ‘65 AC Cobra that captures the spirit of Shelby’s five Viking Blue 289 FIA Cobras. It’s a dead-ringer for a Shelby Team car because it has the same aluminum body and was produced at AC Cars, using original tooling and body buck.

Like Shelby’s racecars, Urciuoli’s roadster, purchased in 2005, has a high-compression 289 with four Weber 48IDA carburetors on a COBRA manifold, headers leading to outside exhausts, knock-off, pin-drive Halibrands, Raydyot mirrors, FIA dash layout, hood scoop and flared fenders. Thanks to an altered deck lid, trunk holds an FIA-legal suitcase. Unlike the five FIA Team racecars, his roadster was built on a standard chassis and is driven on the street. Unlike various Cobra replicas, as an authentic AC-produced Cobra, COX2610 is eligible for various European racing events. 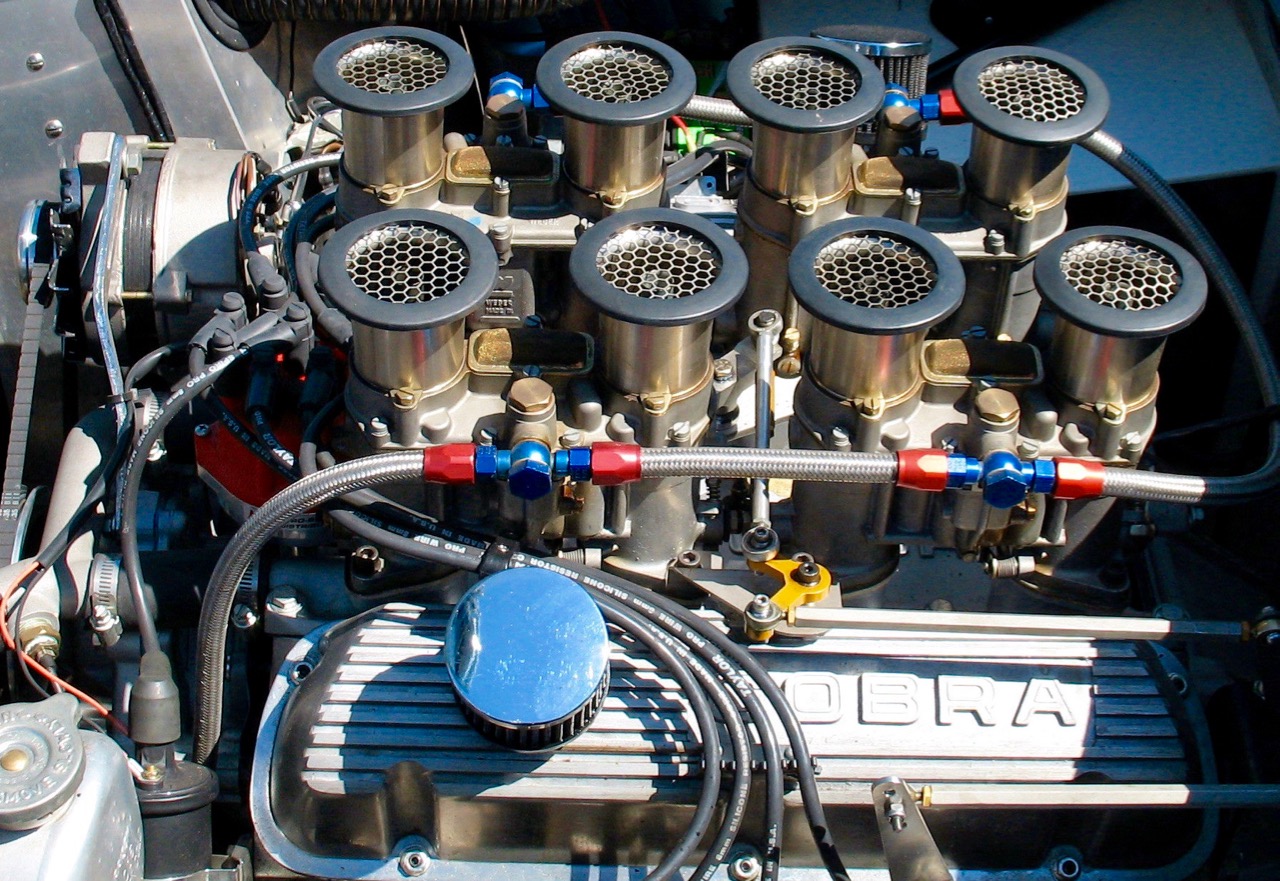 Jim Price, owner of AC Cars in 2006, researched COX2610. In a letter to Archie dated June 12, 2006 he stated: “With reference to your AC FIA 289 chassis number 2610, I can confirm that it was, according to my knowledge, the last car assembled and shipped from the AC Firmley Plant. It was built using all the original tooling and from the original drawings and specifications.”

COX2610 was not built at the time AC Cars was producing leaf-spring Cobras and, even though it has an authentic FIA aluminum body and early chassis, it’s classified as an AC Cars “Factory Continuation Car”. It was bodied (or re-bodied) as an FIA model and purchased by its previous owner in 2003. 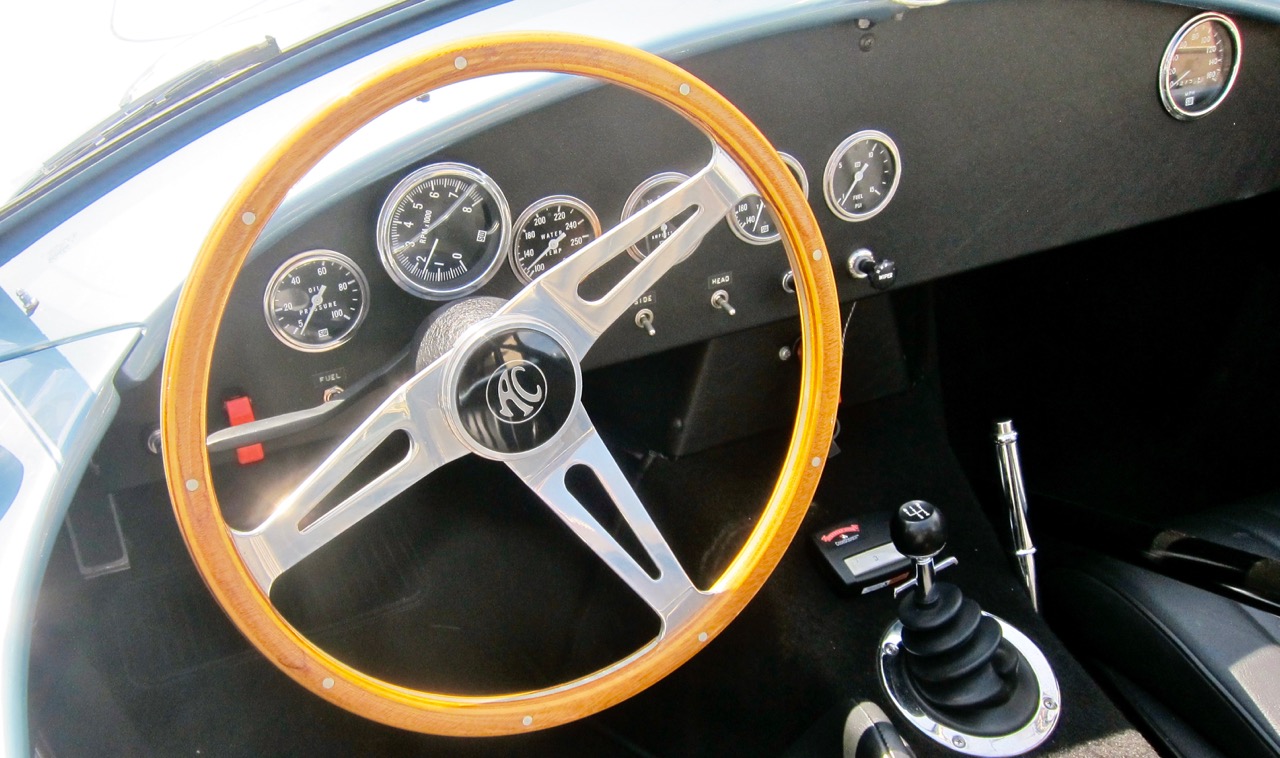 Like the mythical Phoenix, AC Cars – in one iteration or another – keeps on rising from the ashes of its predecessor. The brand was based in the UK and Malta and has experienced a number of owners, partnerships, joint ventures and bankruptcies. When last we checked, Steve Gray continues to build AC289: COBRAS FROM ACROSS THE POND! as well as 427 “Cobra” variants at AC Heritage Ltd, Brooklands Motor Company, Weybridge, UK. AC Cars celebrated its centennial in 2001 and will probably be around to celebrate its bicentennial!

For more information about the history of AC Cars and AC289: COBRAS FROM ACROSS THE POND!, please visit http://www.brooklandscars.co/index.html & https://en.wikipedia.org/wiki/AC_Cars