Farewell to Roy Lunn, who gave us a portfolio of iconic road & track cars and truly led a well-engineered life. 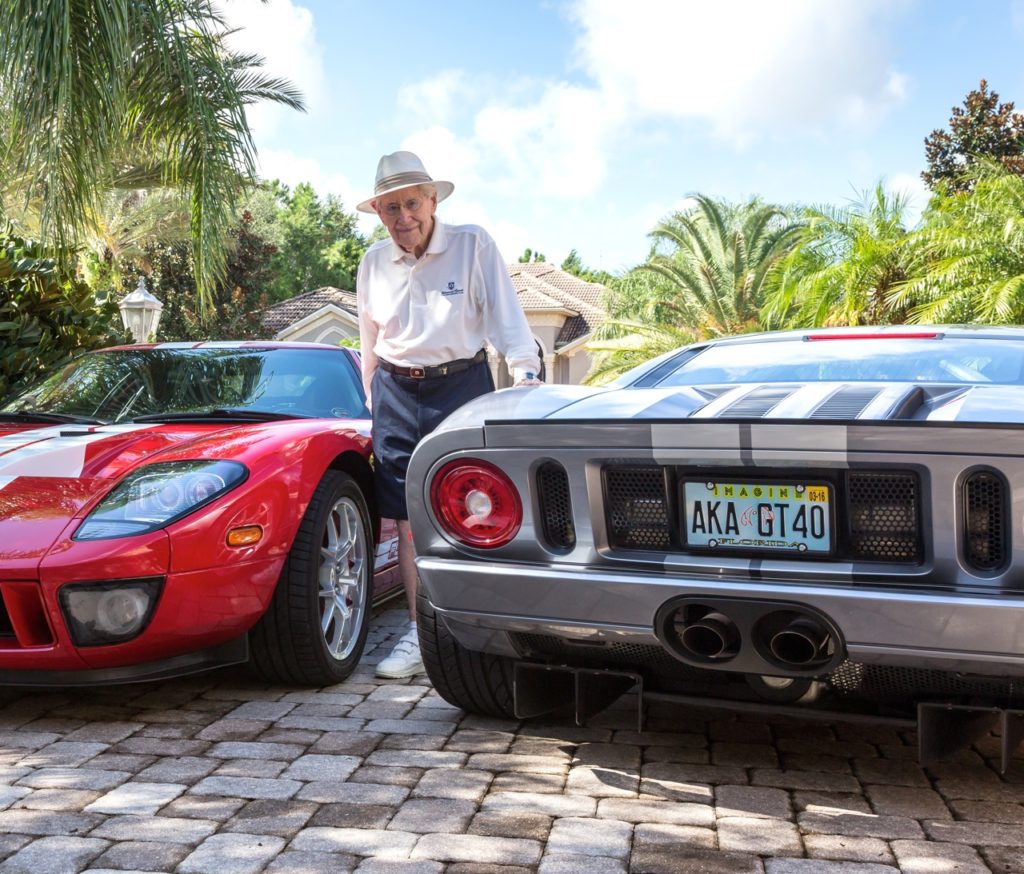 Roy Lunn, the “Godfather of the Ford GT40,” passed away on August 5th, 2017 in Santa Barbara, CA after suffering a catastrophic stroke at the age of 92. His wife of 70 years, Jeanie and two daughters, sister Audrey (Lunn) Lyon, two granddaughters, a son-in-law and one great-grandson survive him.

Roy was born in Richmond, England in 1925, one of three children. He earned degrees in Mechanical and Aeronautical Engineering at Kingston Technical College and was a pilot in the RAF. When World War II ended, he transferred to the Royal Aircraft Establishment in Farnborough and worked on the design and development of gas turbine generators for the first Turbo-Jet aircraft.

He started his automotive career at AC CARS as an engineer in 1946 and, in the late-1940s, he became the Assistant Chief Designer (1947-1949) at Aston Martin and built two DB2s that competed at Le Mans. After three years as Chief Designer and Engineer at JOWETT CARS, in 1953 he joined Ford of England as an engineer and product-planning manager. 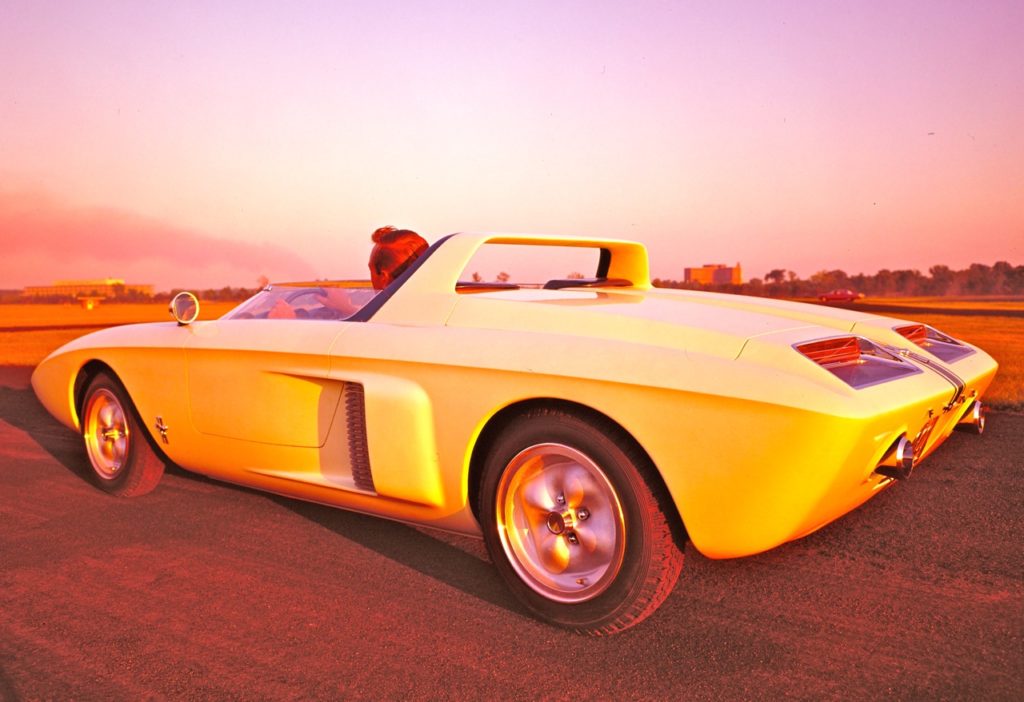 In 1958, Lunn moved to the U.S., taking a position at Ford Central Advanced Engineering. Between 1958-1969, his titles included: head of the Advanced Vehicle Department and the Advanced Concepts Group. Some of the projects he was responsible for included: Mustang I, above, Big Red, the Superhighway truck, Flying Car Concept, the mid-engineered Mustang and all the GT40 variants. 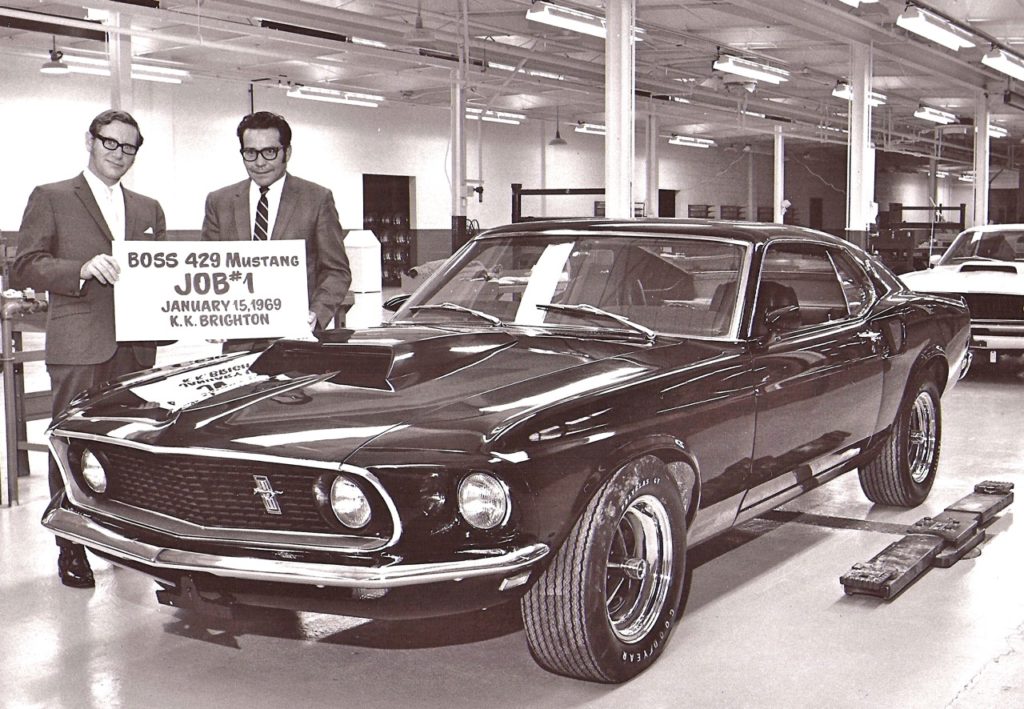 He left Ford in 1969 to become Vice-President of Engineering at Kar-Kraft where he oversaw production of the Boss 429 Mustang, above, Roy Lunn, left,and Fran Hernandez, and development of Mustang concepts with mid-mounted 429 engines. In 1971 Roy was recruited by American Motors Corporation (AMC) to become the Technical Director of Engineering for Jeep.

A dozen years later, he was responsible for the vehicle that would change the automotive landscape in America and beyond: the ’83 Jeep Cherokee XJ. It is considered to be the first modern, lightweight four-wheel-drive unibody SUV. The Jeep Cherokee, below, was the first American-branded vehicle to be manufactured in China and a huge success for AMC and then Chrysler. Over three million Cherokees were sold by 2001. The XJ Cherokee has been referenced as “one of the most influential vehicles” in, A Century of Automobiles. 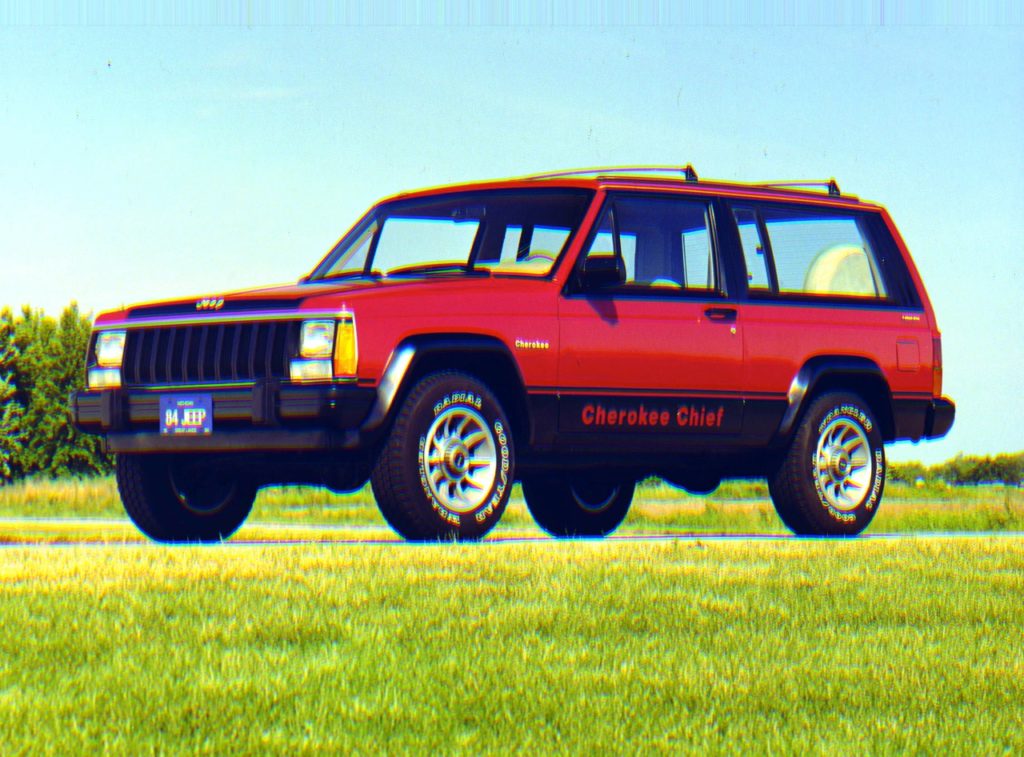 Roy Lunn is also credited with the AMC Eagle, the first production four-wheel-drive car. He was elevated to Chief Engineer of AMC and President of Renault Jeep Sport and centralized all AMC-Renault competition programs in the U.S. Roy Lunn developed the first SCCA Spec-racing car in 1983, the SCCA Sports Renault.

Roy Lunn served as Chairman of the Technical Board of the Society of Automotive Engineers (SAE) in 1982-1983 and elected a Fellow of the Society in 1983. After retiring from AMC in 1985 he joined AM General as Vice-President Engineering to head the HUMVEE compliance program for the Pentagon.

In 1987 he retired to Florida and continued to work on automotive projects. Aside from sailing his monohull “Cat” boat built to his specifications, building two houses and playing golf, he authored three books: The Oil Crisis: Sooner Than You Think!, 2004, Globalization- A Worldwide Quest For A Sustainable Future, 2008, and The World Crisis- It All Started With 9/11, 2009. His story about the history of Jeep is still on the drawing board, as are his tireless efforts towards designing a new ‘Peoples Car’ out of entirely sustainable materials. 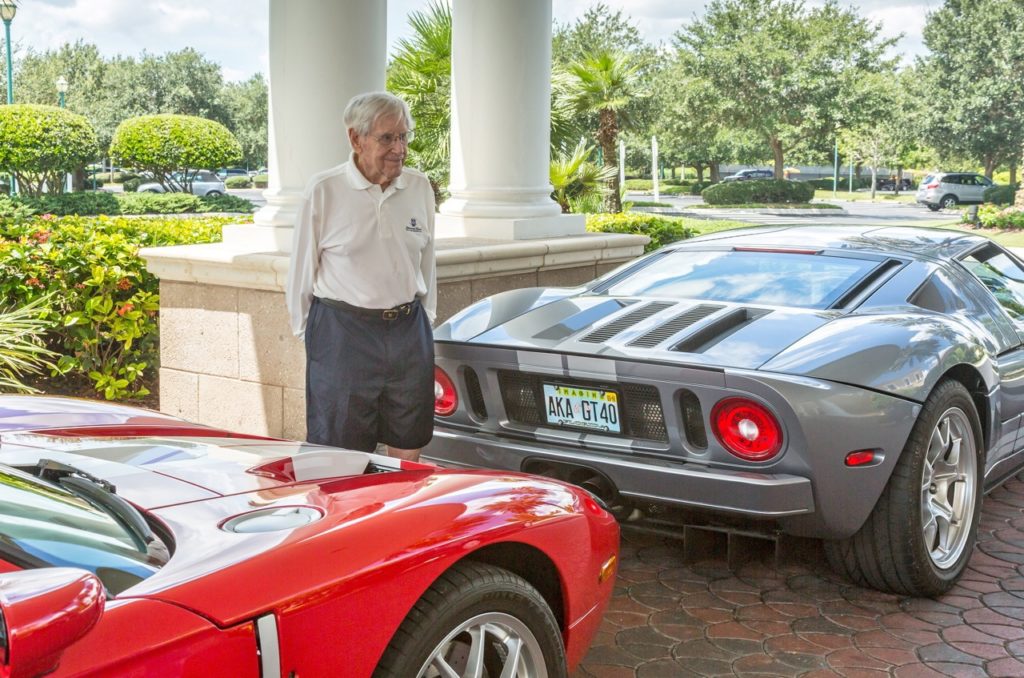 After riding in AKA GT40, he agreed that the Ford GT was the spiritual successor to the GT40! (Gary Jean photo)

After relocating to Santa Barbara, California in 2015 he again set up a working home office and continued development of his new concepts that drew the attention of the local college – University of California, Santa Barbara. Within six months he was a Mentor to their Mechanical Engineering program and met with students weekly to advise and teach them. He was rewarded with an in-depth research project focusing on his plans for the ‘Peoples Car’ and a 3-D model of the concept. 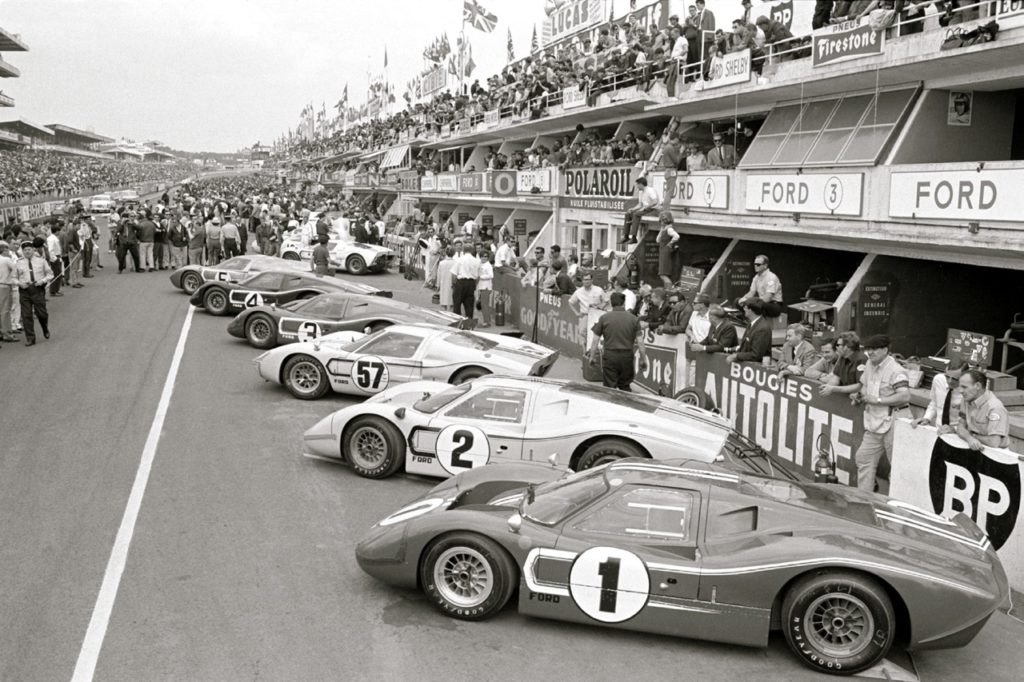 Roy Lunn is one of the industry’s original disrupters, the product of an inquiring mind and relentless ability to utilize it. He was inducted into the Automotive Hall of Fame in 2016 (https://vimeo.com/175255923)for overseeing the development of the legendary Ford GT40 that ended Ferrari’s domination of endurance sports car racing. GT40s won the 24 Hours of Le Mans four consecutive years -1966-1969. He felt it was the proudest moment of his life when his peers in the industry recognized his work. His goals throughout his career were visionary, with a clear eye to the future. Roy was especially proud of the 1967-Le Mans, above, winning Mark IV, the first GT40 designed, engineered, powered, developed and built in the U.S. 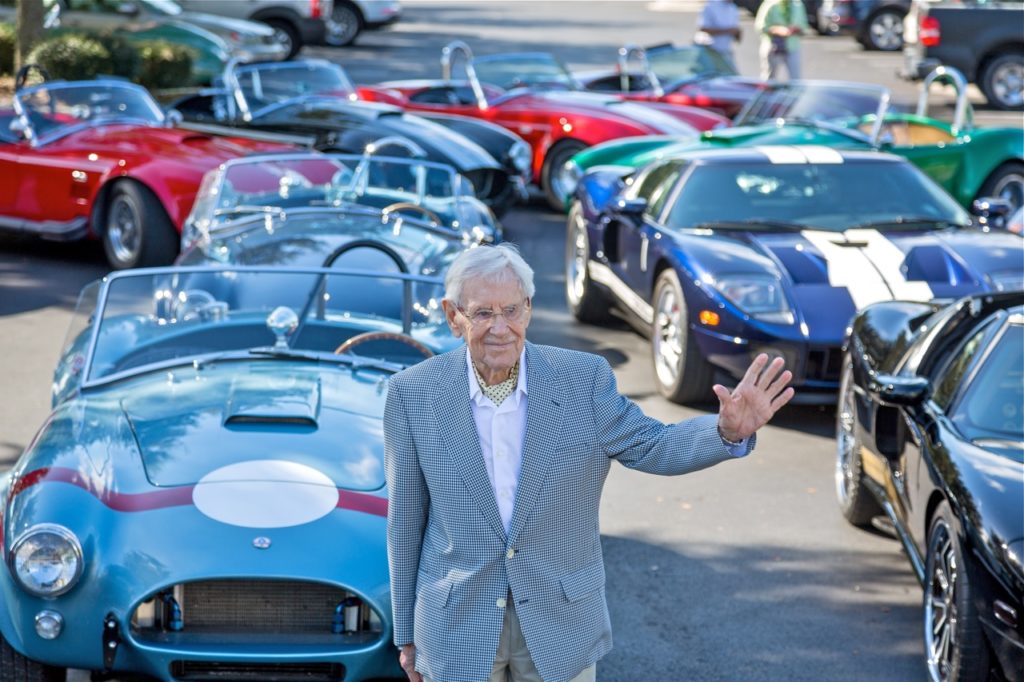 In lieu of flowers, the Lunn family suggests that any donations should be made to UCSB. Gifts will support engineering and design education of the Department of Mechanical Engineering. Checks should be made payable to the UCSB Foundation (In memory of Roy Lunn) and mailed to Steve Ramirez, Lead Director, Engineering Development, College of Engineering, UC Santa Barbara, Santa Barbara, California, 93106.Online: https://giving.ucsb.edu/Funds/Give?id=301