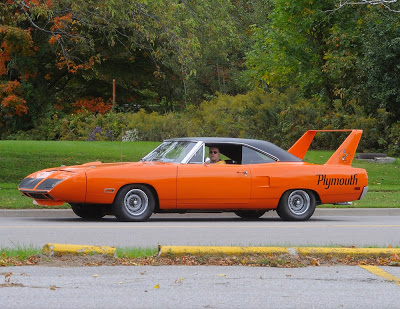 The story of Ron Charity’s ‘70 Plymouth began in August 1969, when the 440 four-speed Superbird rolled off the line at Chrysler’s Hamtramck plant in Michigan for delivery to Sorenson’s Plymouth/Dodge in Toronto, Canada. Ron and his Dad were going car shopping, driving a small-block ‘67 Chevelle 327 on Sheppard Avenue. Their first stop was Hudson’s Chevrolet to check out an orange ‘70 Pontiac GTO Judge.

After a test drive of the Judge, they continued down Sheppard where an orange car with a wing and a nose caught Ron’s eye. He suggested they stop and have a look. His Dad’s initial comment was that it was just something the dealer made up to attract customers.  But at Ron’s insistence, they drove in, spoke to the dealer about the car, and took it out for a
test drive. Good thing they did!