Skip to content
Back in the day, Norman Mayersohn was a hands-on drag-racing editor at Car Craft magazine. Since then he’s gotten a haircut and has held positions as Auto Editor, Popular Mechanics magazine and Deputy Auto Editor, The New York Times. And, he’s been a friend for decades. He reminisces about winning races and setting national records in his ’65 Chevelle Super/Stock. 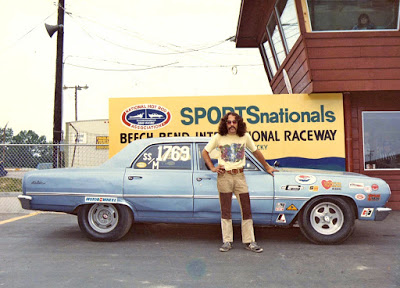 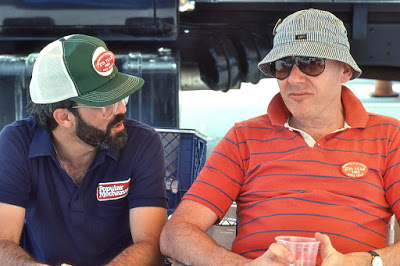 Norman, top, with record-setting crapbox Chevelle sedan at the 1974 SPORTSnationals and, above, left, with CarGuyChronicles editor, Marty Schorr, at Speed Week at Bonneville in 1985. I was there representing Buick and he, auto editor of Popular Mechanics.

OK, folks, this car is the “Stocker Street East” project that I cobbled together at Car Craft in the 1970s. It followed the O/Stock ’65 Chevelle station wagon that John Mackey and I built in 1971, my senior year of college, for NHRA Division 1 racing. The wagon, built on a shoestring, set the NHRA national record at 13.55 at the Englishtown, NJ points meet in May of 1971.

There are many parallels. Like the wagon, the four-door’s body was actually a ’64 that John, a high school buddy, put a ’65 nose on. And I built the engine, a 250-horse 327, at the Truppi-Kling shop, as I did for the wagon. The T-K shop is where I spent all the time I should have been in class. It’s also where I got the education that has fed me all these years! 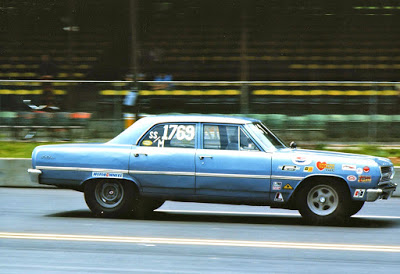 The racing venture started auspiciously. When I fired the engine for the first time, in the end bay of the Neptune, NJ, Gulf station owned by John’s father, it almost immediately dropped a valve. With a new piston and head, it got back together.

When the first NHRA SPORTSnationals event was announced for 1974, it was apparent I’d have to go. I don’t actually remember how all the pieces got there. Very likely I drove from California to New Jersey with Gus, my long-haired German shepherd, and picked up the car and open trailer from NJ. (Wait – maybe I was coming from California with the car to race that body for its last time, before swapping all the pieces into an SS Hardtop that John had built. Those details are long gone.) I was probably using my father’s Dodge station wagon, which was well equipped for towing. In any case, John couldn’t come to the race, so it was just Gus and me at the race. Fortunately my good friends Leo and Ricky Klarr were there with their Nova Super Stocker, so I had some help. Rick Voegelin, my Car Craft colleague, was also there, but busy covering the race.

I don’t recall running the car before getting to Beech Bend, but I must have. (I hope John Mackey will chime in with some facts.) There were maybe seven or nine cars entered in SS/M, but the main threat was the 340 Plymouth Duster of Ted Flack and Howard Comstock, essentially a factory car (Flack worked for Chrysler, in transmissions, then). The Duster guys paid no attention to this long-haired freak with the unlettered crapbox Chevy, though the first couple of build articles had been published in Car Craft by then. I made three time trial runs on the first day, something like 11.63/11.62/11.61 on an 11.65 dial.

At one point, as I pulled out of my pit spot to head for the staging lanes, another racer zooming down the row ran broadside into the Chevelle’s rear quarter. It was Truman Fields in his Firebird. You really couldn’t do much more damage to the Chevelle, so I re-contoured the quarter panel, kicking from inside while sitting in the trunk and then smacking it with a sledge to restore the proper Jersey patina!

I don’t recall whether we ran off the national record or an index in 1974, but I suspect it was the record. All was working fine, and I went to dinner with the Klarrs, but not before driving the car over the front stops while loading it on the trailer. A lot of jack work later, it was back in place. Despite my protests, Leo ordered a steak dinner for Gus.

On the day of class runoffs I went up to Flack and suggested that the two of us, the fastest cars in the class, ought to stay away from each other until the class final. (I was several hundredths faster than him, but I’m not sure how much). He said, “Fine, you go into line first.” Of course I waited and went into line last! 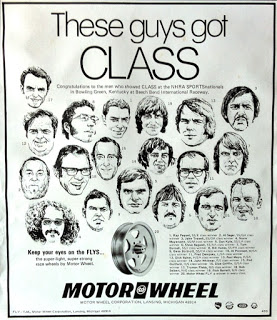 We each won our rounds and met in the class final. Before the run I suggested that whoever was behind in high gear ought to let off – because class final runs counted as new class records at the time. He agreed. I cut a good light, led through three gears and was well ahead when he let off in high gear. Then I backed off. Class win for the long-haired freak with the crapbox Chevy … over the shiny new factory car. Sweet!

That meant a head-off teardown. I went to the teardown barn and the Klarrs, who had lost in class runoffs, helped me out. I took the carburetor, intake and head off, handed the parts to Ricky and Leo to take to the inspection benches and started to clean up the block for the bore/stroke deck-height check. Before long, I noticed something all the way across the barn – Leo, with my cylinder head, was in deep conversation with Bill “Farmer” Dismuke, legendary NHRA national Tech Director.

Clustered nearby were the Chrysler factory race group guys: Dave Koffel, Larry Shepard (and perhaps Dick Maxwell). In an unusual moment of restraint I went back to cleaning the deck surface. Pretty soon I learned what was going on. When NHRA measured the valves, the exhaust was .001” too small. Yes, too small. The factory guys wanted me thrown out.

Mustering his considerable Mississippi charm, Leo talked Farmer into taking all the valves out of the head. If no others were undersize – undersize, mind you, not the advantageous oversize! – they would let me keep the class win and go into eliminations. All of the other valves checked out fine. I was so keyed up that instead of putting the car back together there, I loaded it onto the trailer, tossed the parts into the trunk and went to the hotel to wrench.

As I worked in the hotel lot, Truman Fields drove by with his Firebird on his ramp truck and saw me. He pulled into the U-shaped Holiday Inn driveway with the intention of having some words over the crash that he thought I caused. At the far end of the U he realized he wouldn’t make the turn and started to back up. That put the rear end of the Firebird through the glass door of Paul Mayo’s second-floor hotel room. Fields left, hurriedly. I continued my work.

And then Larry Shepard, whom I knew from articles we’d worked on together, came walking by. Without a greeting or discussion, I handed him my intake manifold and a scraper. He was a good sport and cleaned it well. (I saw Dave Koffel this summer, when he was on a panel I moderated at the St. John’s Concours, and he maintained that he was just doing his job.)

The next day I went a few rounds in eliminations; I remember beating Dan Kyle’s ’69 Camaro but then breaking out in the next round (disqualified for running too fast, more than 0.10 second quicker than the national record). In all, not a bad race, considering the drama.

I’m sure I’ve forgotten many juicy details, so please remind me of any omissions.