Production of lightweight ’63 Super-Duty Pontiacs was extremely limited, but high-profile racer Mickey Thompson got the first two. One of those featured here is in the Factory Lightweight Collection. 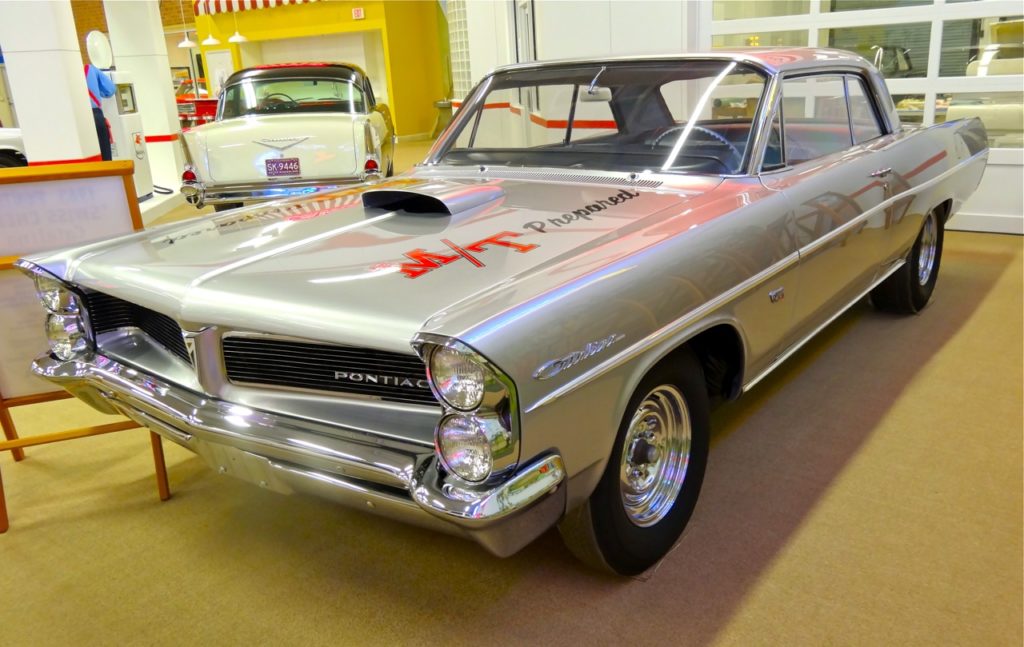 Roger Huntington writing in Hi-Performance CARS is often credited with first using “Swiss Cheese” to describe lightened Super-Duty Pontiacs. It came to him after he counted 120 holes drilled in the perimeter frame of Royal Pontiac’s Catalina, driven by Jim Wangers. A total of 18 aluminum body parts were used to reduce the weight of a Super-Duty 421 Pontiac. A lightweight Catalina weighed approximately 3,300 pounds. Plexiglas side windows and aluminum deck lids helped keep the weight down. Some early cars ran with stock aluminum hoods fitted with Ford Super-Duty truck scoops! 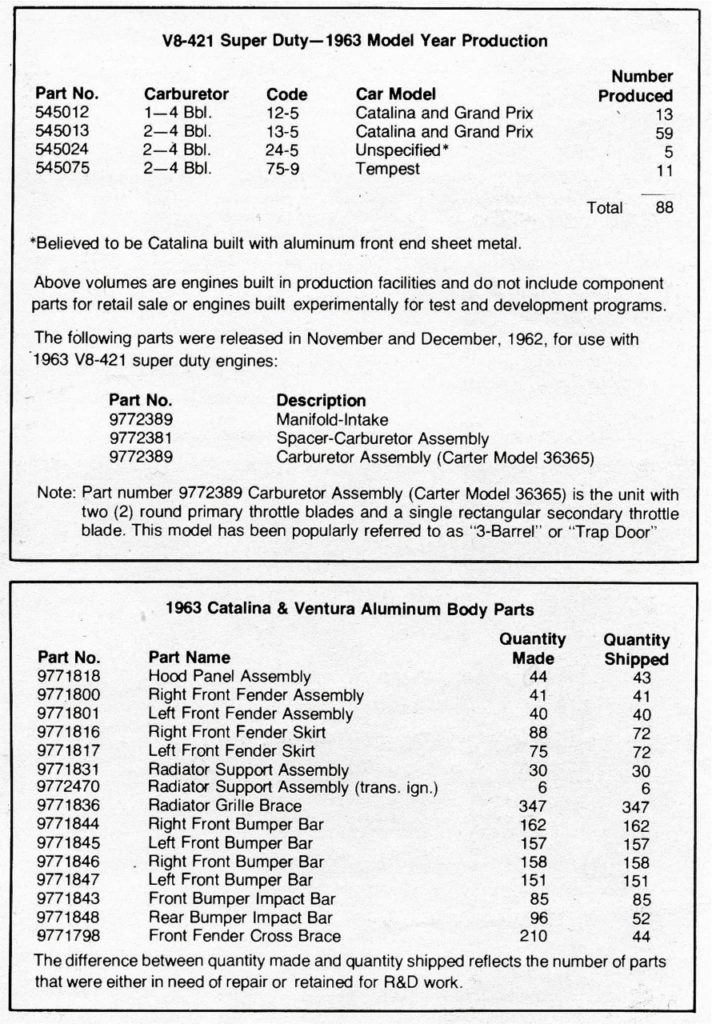 Pontiac’s Malcolm “Mac” McKellar came up with a new cam and dual valve springs that allowed shift points as high as 6,400 rpm. Tuned aluminum exhaust headers, just 27 pounds per set, were mated to a single muffler system. While Pontiac upped the 421’s horsepower from 405 to 410, the new heads, camshaft, valve train and compression increase translated into a solid 40-50 horsepower bump. Racers experimented with a variety of cams, including Number 10 and 12 McKellar grinds.

Early in 1963, Royal Pontiac’s B/FX Lightweight tuned by Frank Rediker and driven by Jim Wangers, posted times in the low-12s at 117-119 mph. Wangers went on to a class win at the NHRA Indy Nationals. Howard Maselles later drove the Packer Pontiac lightweight into the NHRA record books, setting the C/Stock record at 114.64 mph in 12.27 seconds. 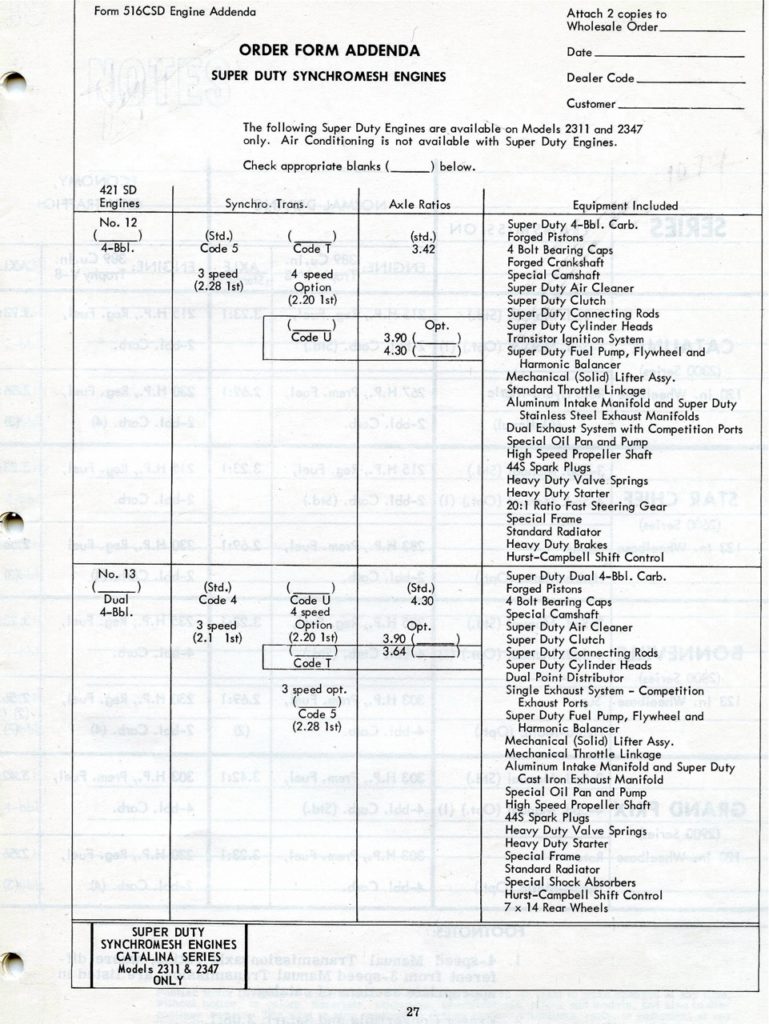 Total production of 1963 SD-421 Pontiacs is pegged at 88. This includes 14 lightweight full-size models and 12 Tempest compacts, plus steel-body cars and development vehicles. 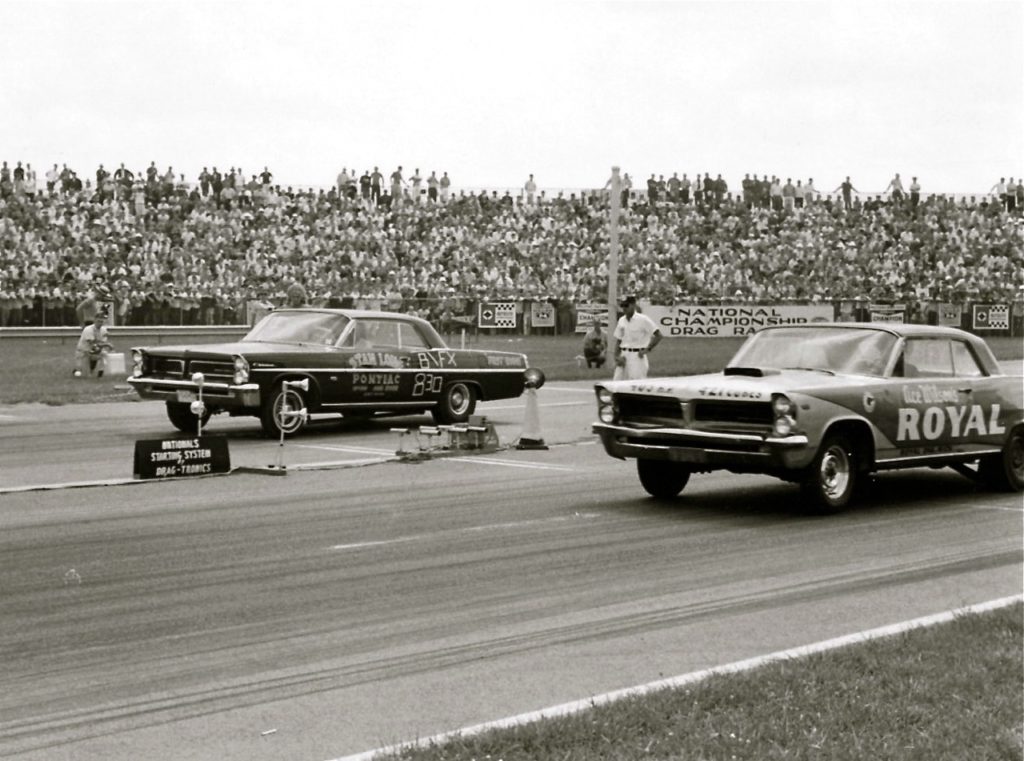 While it is hard to deny the performance of lightweight Pontiacs or the romance attached to factory lightweight cars, the decision to drill-out the chassis was questionable. Lightening the chassis resulted in a lack of structural integrity that affected safe, reliable performance. They had to be braced and, in many cases, replaced. In retrospect it was not a smart decision. Pontiac’s Super-Duty racing programs were officially shut down on January 24, 1963, a victim of GM’s racing ban. It was the end of the road for the Bunkie Knudsen programs that had successfully reversed Pontiac’s early-1950s stodgy image. But, all was not lost. Less than one year later, Pontiac would jump-start the Supercar revolution with a car called the GTO! 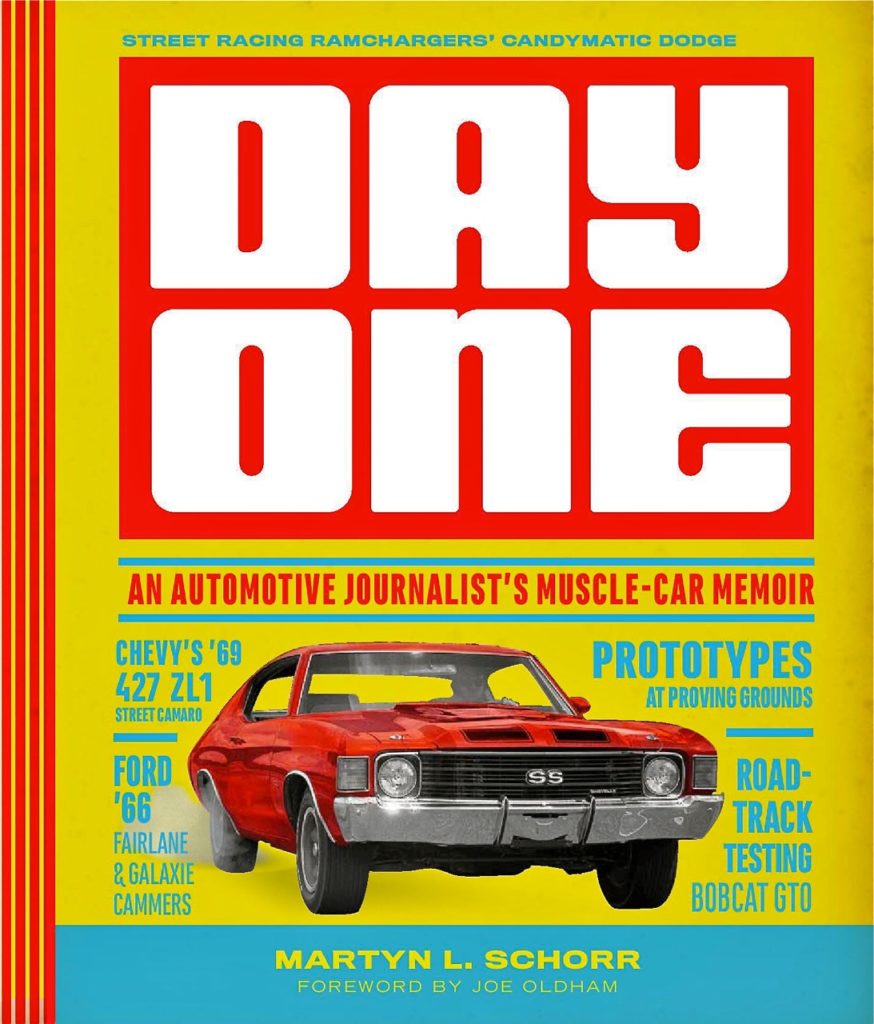 Full coverage of Super-Duty Pontiacs are covered in DAY ONE, a new book by Chronicles Editor, Marty Schorr,https://www.amazon.com/Day-One-Automotive-Journalists-Muscle-Car/dp/0760352364/ref=sr_1_fkmr0_1?s=books&ie=UTF8&qid=1498587171&sr=1-1-fkmr0&keywords=DAY+ONE%2C+automotive+journalist+musclecar+memoir