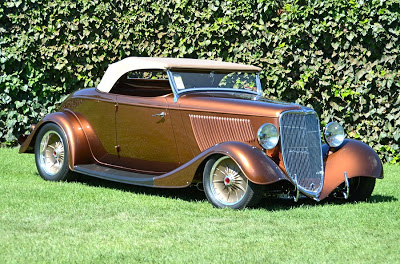 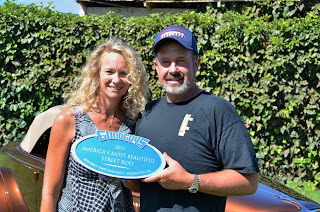 The Chapmans accepted the prestigious award in front of a packed house during the Goodguys 27th annual Flowmaster West Coast Nationals – the largest gathering of rods & customs in the West. The win capped off a big year for the roadster that has been shown at all the nation’s biggest events this season. It received “Best Rod” at the Detroit AutoRama and was a Top-5 finalist for numerous other major awards this season, including America’s Most Beautiful Roadster, Goodguys Street Rod d’Elegance and Goodguys Street Rod of the Year.

This roadster bounced around unfinished at several high-profile shops for at least ten years before Harold Chapman scooped it up. His in-house fab shop, Customs & Hot Rods of
Andice, TX, finished the project in time to debut at January’s Grand National Roadster
Show where it was one of the favorites for the AMBR. 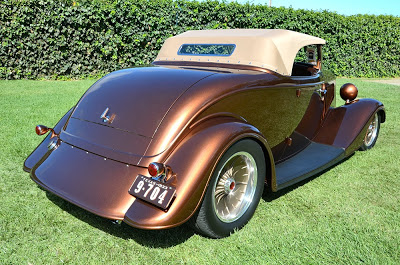 Upon first glance, seasoned car guys can sense something unique in the roadster’s elegant flowing lines. The heavily modified top was moved back an inch-and-a-half, no easy feat! Countless hours went into finessing the fit and finish before the PPG Pretty Penny paint was applied. Over 100 parts and pieces were custom-machined in house for the project. 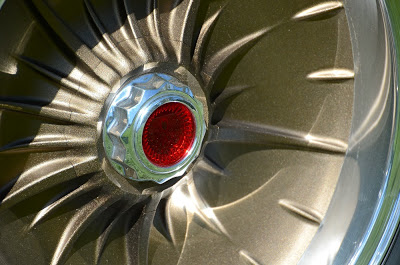 The underside of the car is a work of art with a boxed and dimpled frame, a one-off aluminum hairpin and dropped axle assembly, and a full custom four-link rear suspension with a Currie rear end. Brakes are Wilwood rear discs and modified So-Cal Faux Brakes up front. Evod Industries machined the dished, bronze-coated wheels, above, designed by Jimmy Smith. 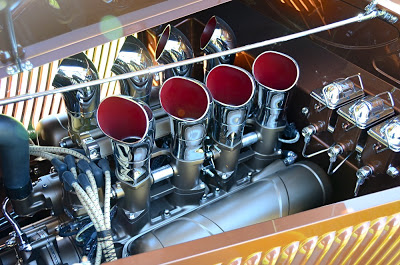 A Roush 427 Ford is featured under the hood with a custom-scooped TWN injection system and AFR heads. The transmission is a TKO-600 with a modified ’36 Ford shifter and one-off bezel. 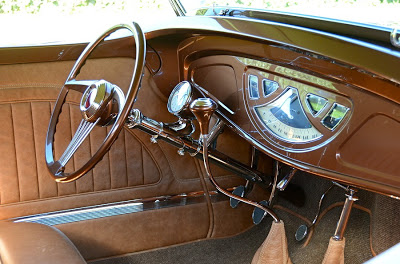 The custom wrap-around dash is now two inches taller than stock and filled with a flipped Studebaker gauge cluster with custom internals by Classic Instruments. A Greening Auto wheel and column-mounted tach round things out. Chapman’s in-house trimmer, Jay Schuler, crafted the bench seat and stitched the custom pleated leather.

Chapman is not the least bit afraid to test his hot rod’s limits after a season of mostly showing off. He’ll join Goodguys Street Rod of the Year winner Ron Cizek, Andy Leach and the Ridler-winning ’40 Ford among other high profile cars (such as George Poteet’s ’69 Torino) on the 2,000-mile Goodguys Texas Road Tour, from Pleasanton, CA to Ft Worth, TX later this Fall.