They say four wheels move the body; two wheels move the soul. Now in its 11th year, The Quail Motorcycle Gathering proved once again to be a vital force that attracts passionate motorcycle enthusiasts from around the world, to the emerald lawns of Quail Lodge & Golf Club in Carmel, CA. They come to celebrate the history, the beauty, the power and the future of all things two-wheels. 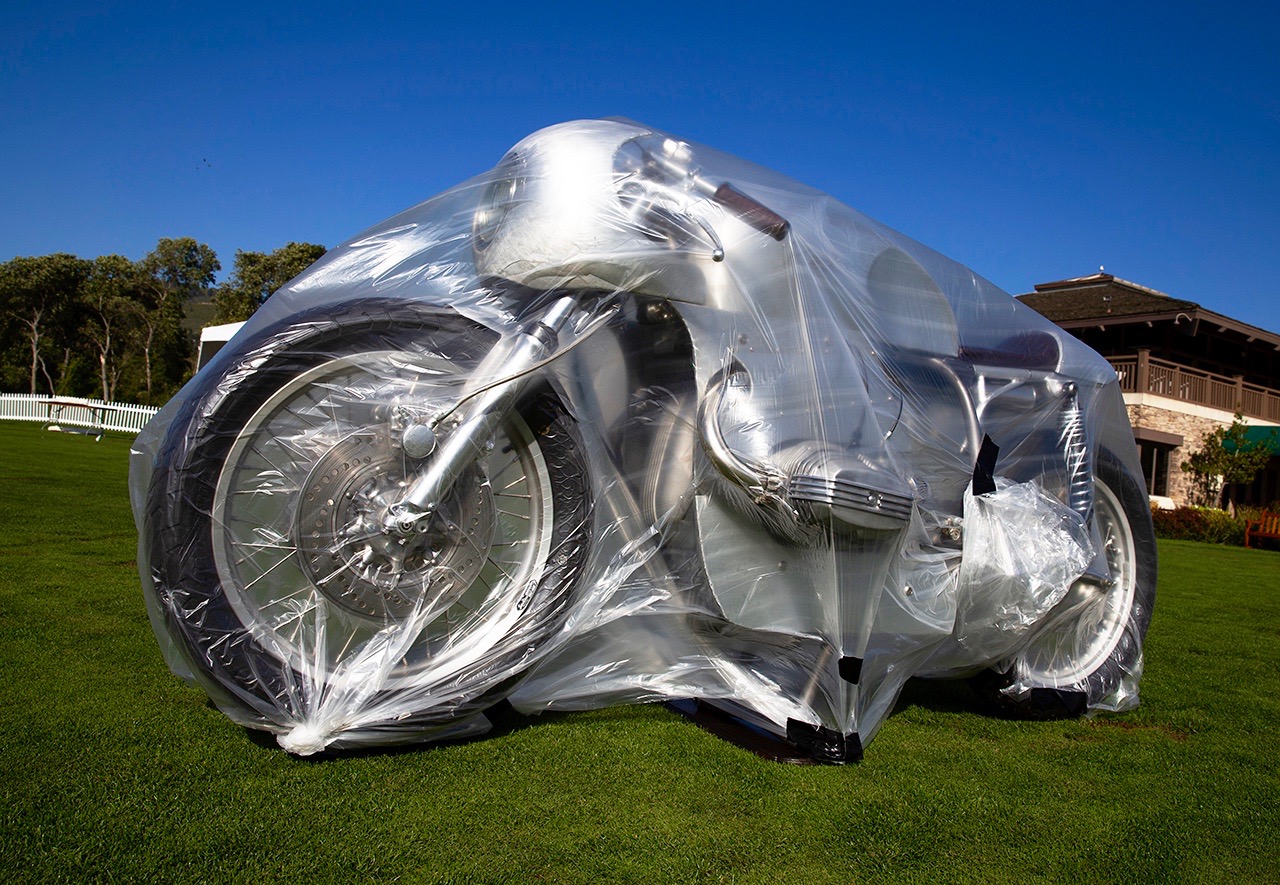 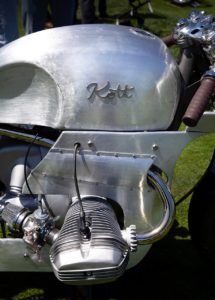 To unwrap the essence of this annual gathering I arrived a day early to explore & learn as the exhibitors – some 350 strong – rolled their treasures onto designated class sections of the field. There were areas for American, British, Italian, Other European, Japanese, Competition On-Road, Competition Off Road, Antique, Custom/Modified motorcycles, plus Extraordinary Bicycles and Scooters.

Early Saturday morning, show day, there was a buzz of anticipation and the aroma of gourmet cuisine wafting through the air. The entrance road to the event was now lined with spectator motorcycles – many as rare and pricey as the gems on the field. By 10 AM there were over 3,000 spectators in attendance. Everyone was smiling. We had gathered!

Details of Dustin Kott’s ’78 BMW R80, top & right, peek through its plastic cocoon as it naps during Friday afternoon’s roll-in. Kott is admired for his hand-crafted, Café Racer interpretations of 1970s vintage bikes – many from the Honda CB series. 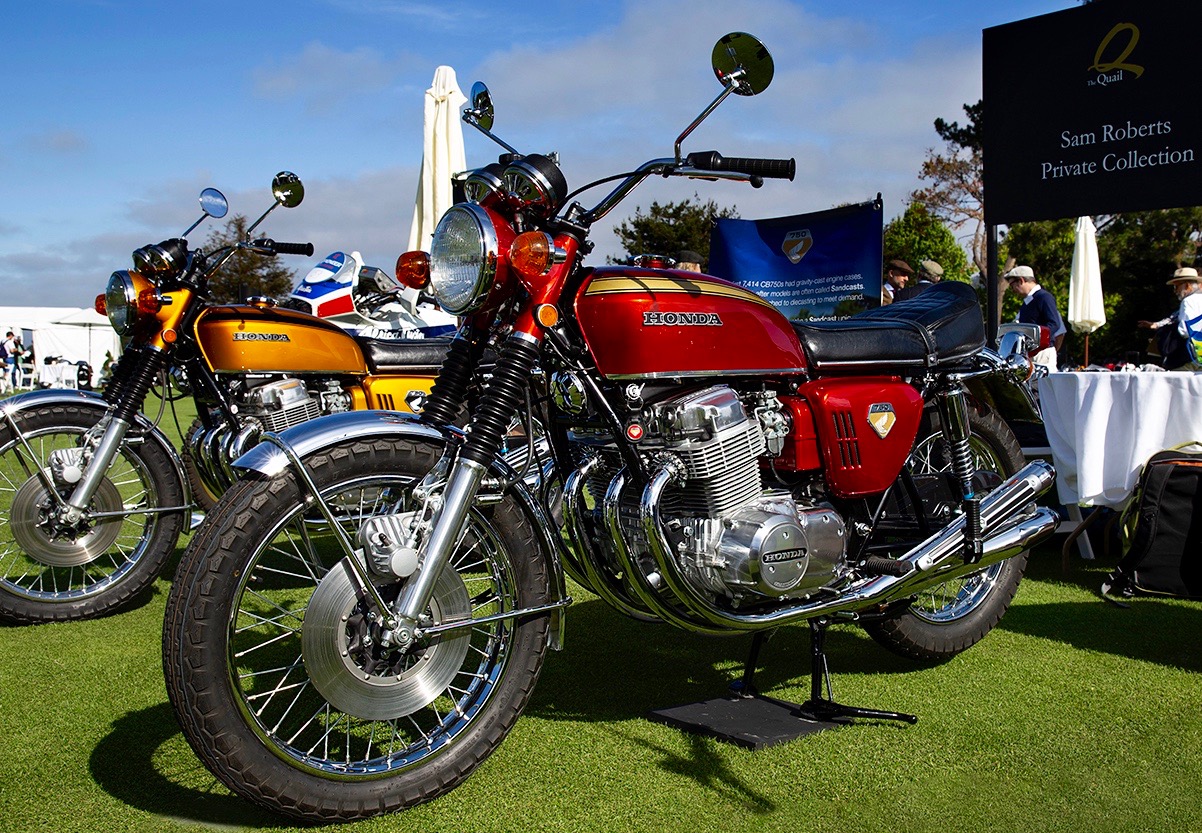 Sam Robert’s immaculate’69 Honda CB750 Sandcast took Best of Show on Saturday. One of four featured displays at this year’s show was the 50th Anniversary of the Honda CB750. Many consider the ’69 CB750 to be the world’s first Superbike. 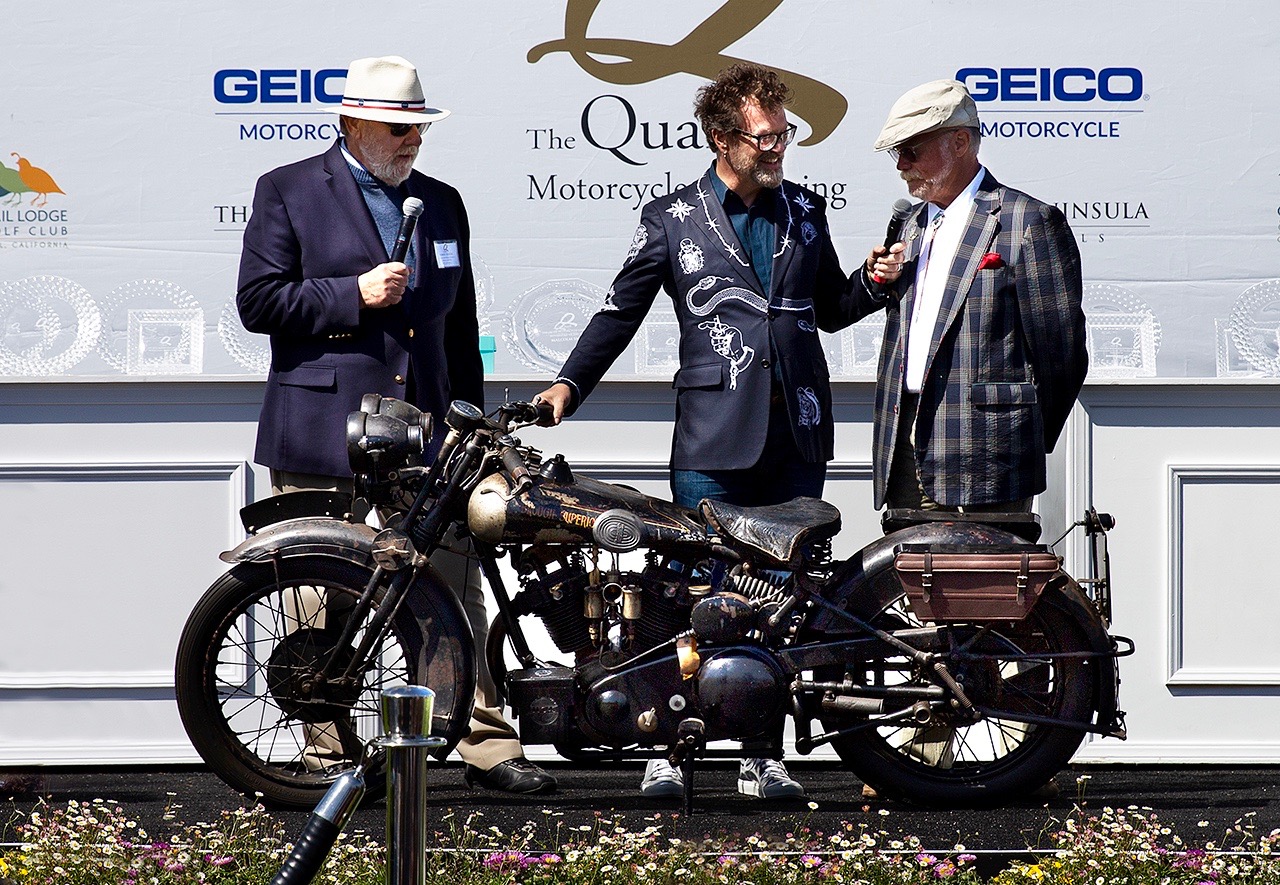 One of the more popular featured displays was the 100th Anniversary of the Brough Superior. One of the standouts of that display was Bryan L. Bossier, Sr’s ‘29 Brough Superior 680 OHV that won the HVA Preservation Award – being presented here by Paul d’Orleans, the Gathering’s always colorful MC. 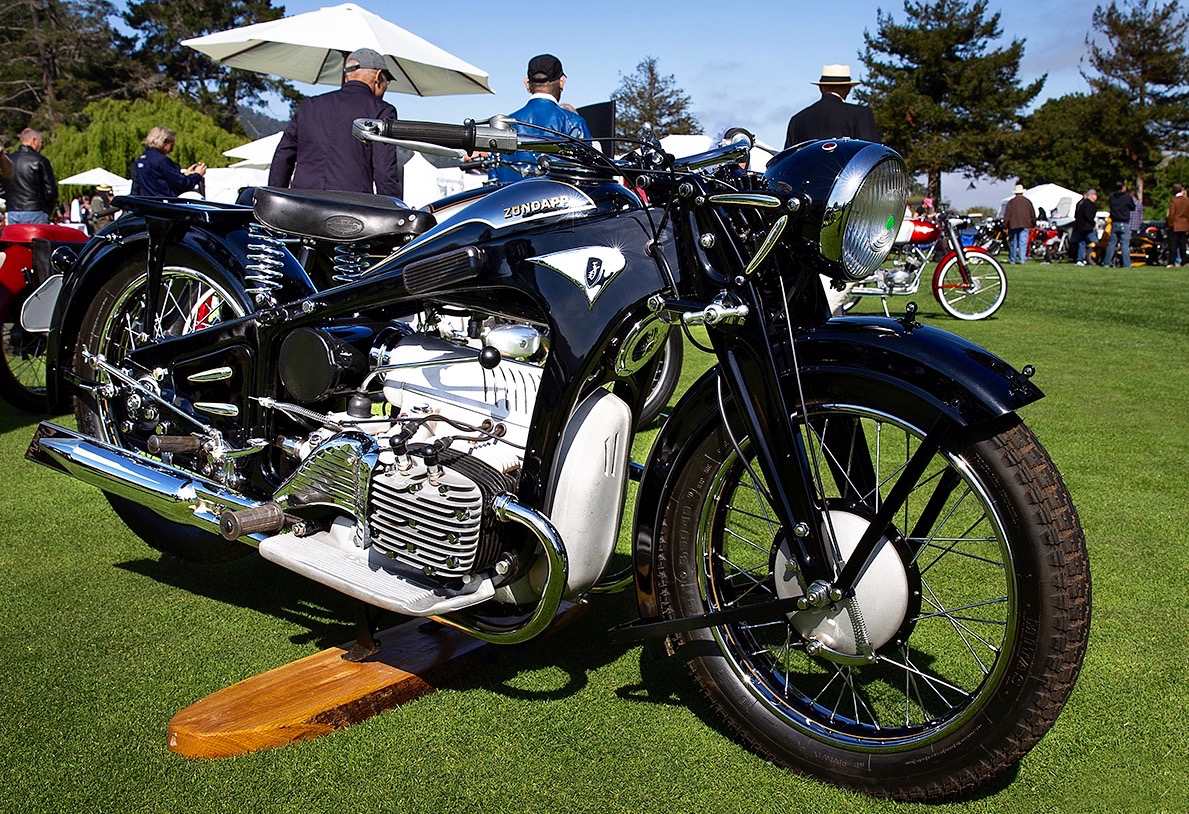 Wine magnate Tony Norskog is addicted. He’ll admit it. He has an insatiable appetite for rare, classic motorcycles – like his beautiful ‘37 Zundapp K800. Powered by a horizontally opposed four-cylinder engine mated to a shaft drive, the sturdy K800 also features unit construction and pressed-steel girder forks, making it an ideal sidecar hauler on the rugged roads of prewar Germany. 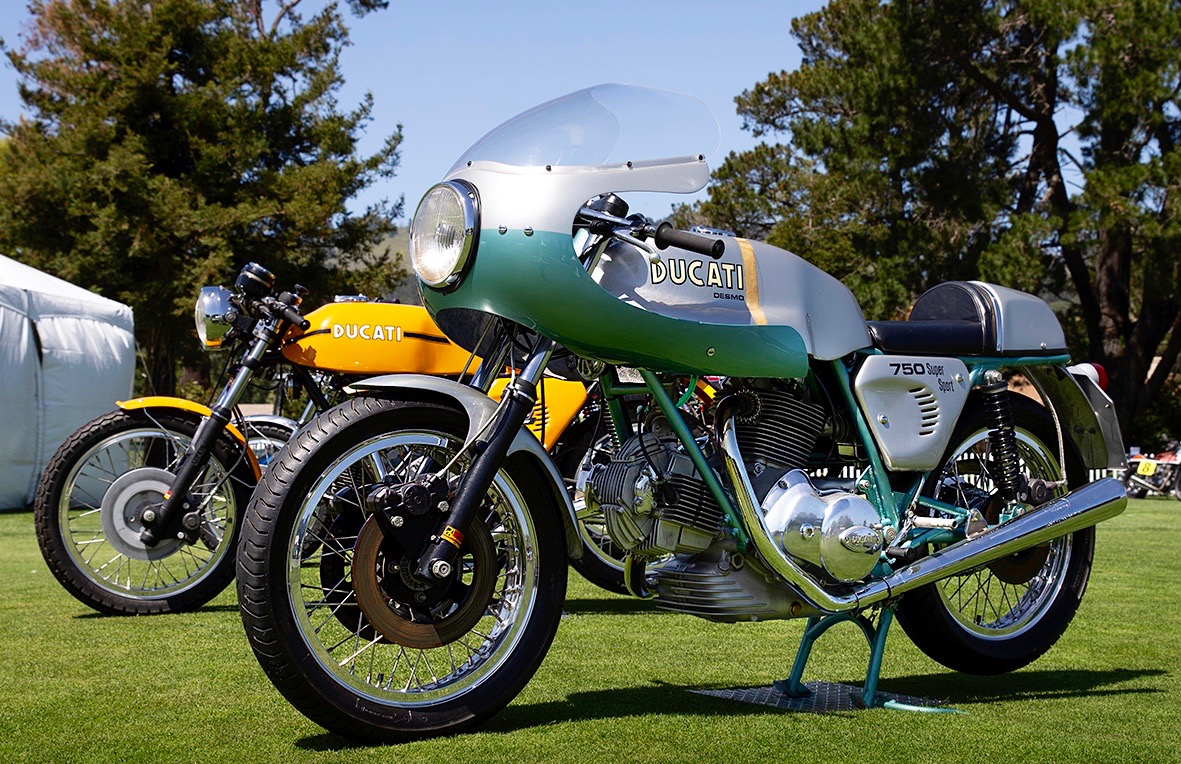 The very rare ‘74 Green Frame Ducati 750 Super Sport was built by Ducati’s race shop in limited numbers. Featuring the round-case 90-degree v-twin with Desmodromic valve gear and a fiberglass fuel tank with a transparent fuel level viewing stripe, the ’74 SS was considered to be one of the most significant production bikes of the time. 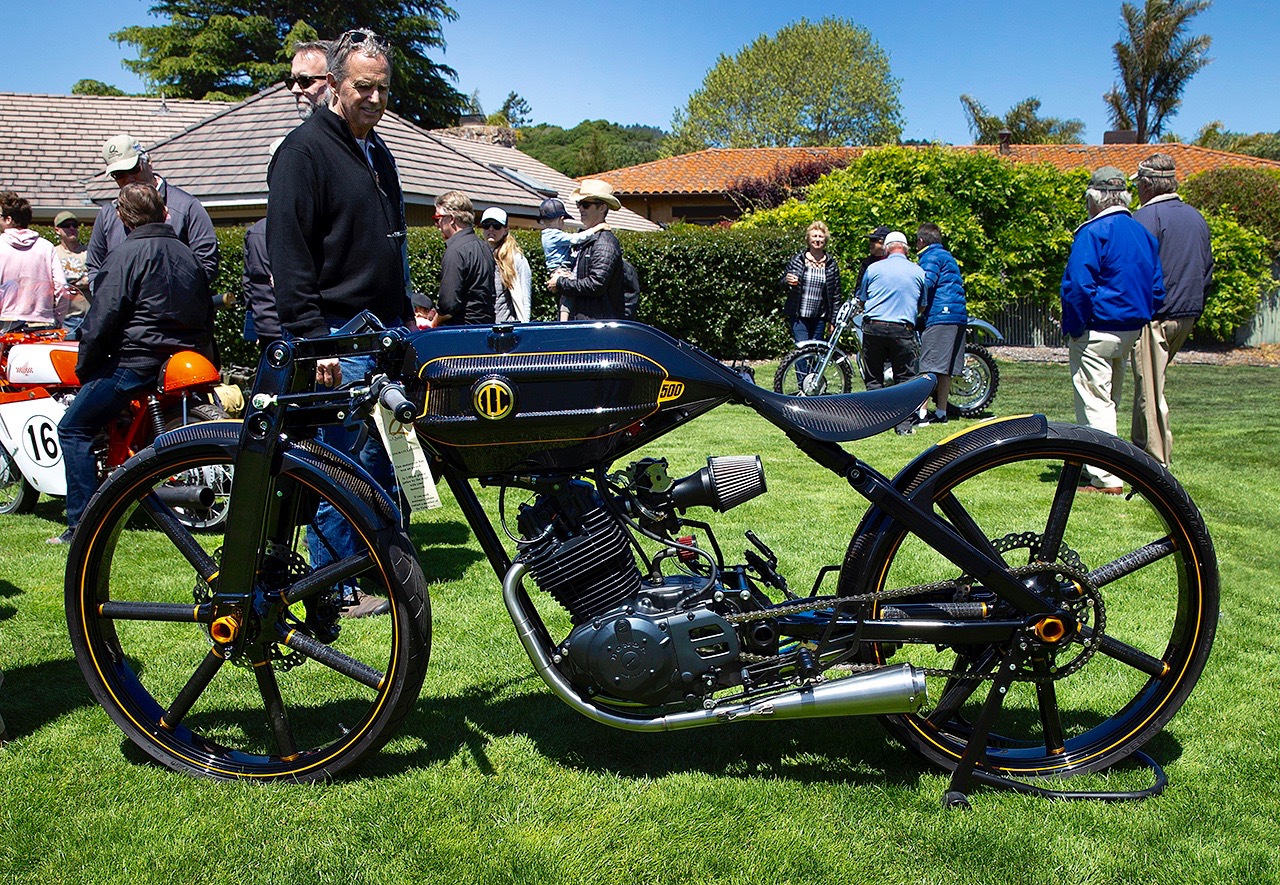 Niki Smart is a lauded automotive designer. His extraordinary ‘81 Honda XL500 took 1st place in the Custom/Modified class. The genesis of the bike’s radical design was Niki wanting to see what a classic, Board Track racer would look and perform like when using modern engineering, build techniques and materials. 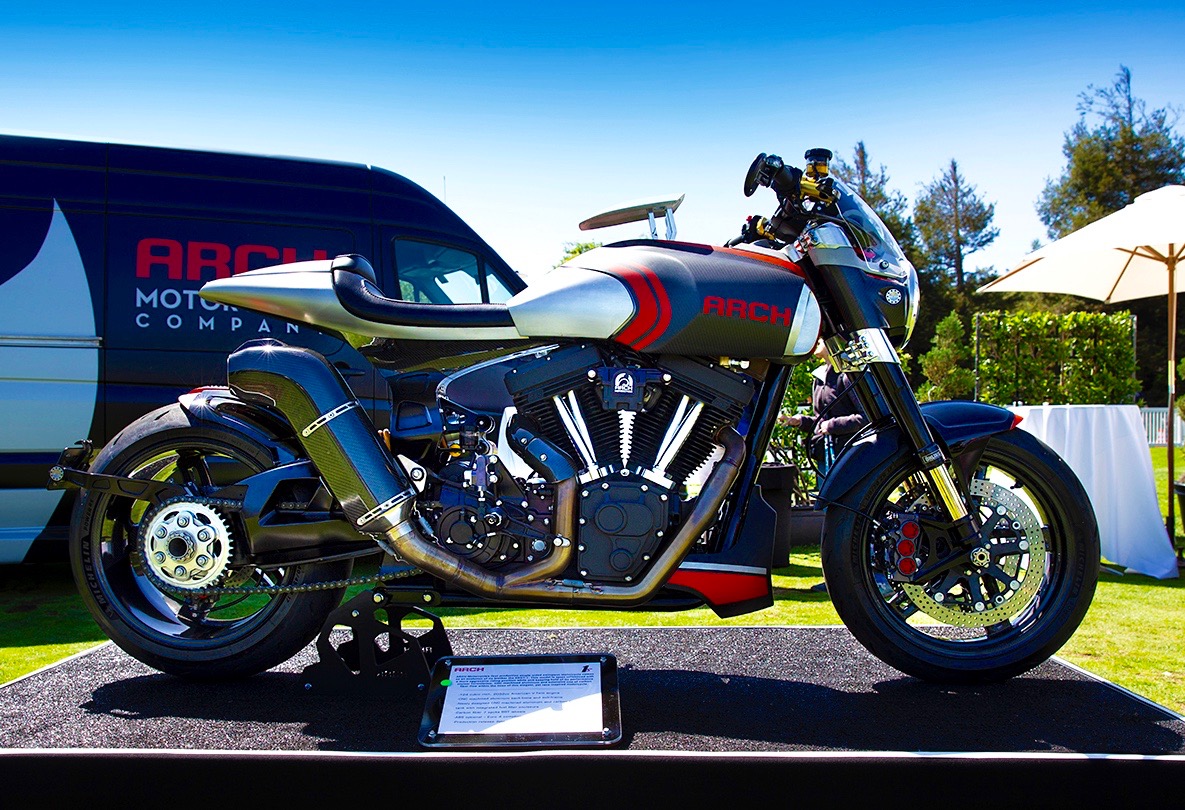 No Keanu Reeves sighting at The Quail, but I did get an up-close look at the Arch 1S performance cruiser – the latest from Arch Motorcycles. The S1 is powered by a 2032-cc, S&S Cycle T124 45-degree downdraft fuel injected V-Twin. It’s the first, single-sided swingarm motorcycle from ARCH. 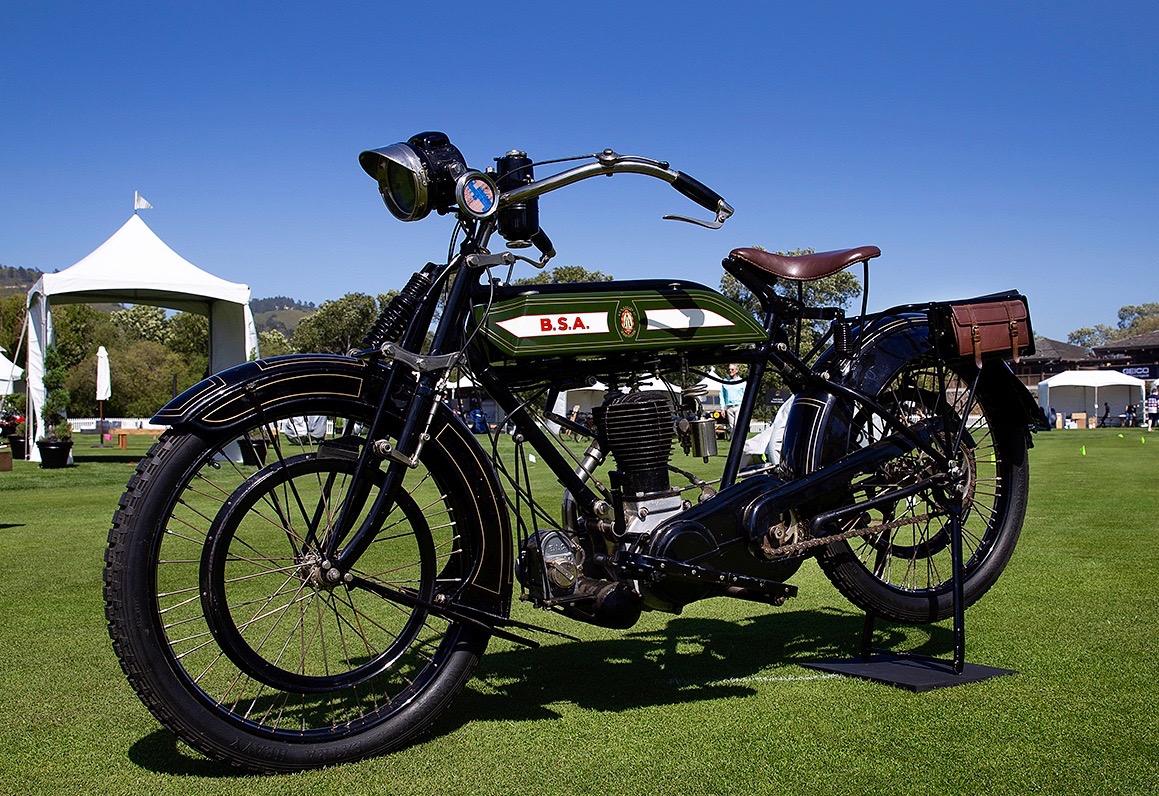 It wasn’t until 1910 that BSA (Birmingham Small Arms) started to introduce motorcycles that were of their own design and manufacture. Budd Schwab’s beautiful flat tank ‘18 BSA Model H features a three-speed gearbox and fully enclosed, all-chain drive. It was this year’s 2nd Place winner in the Antique Class. 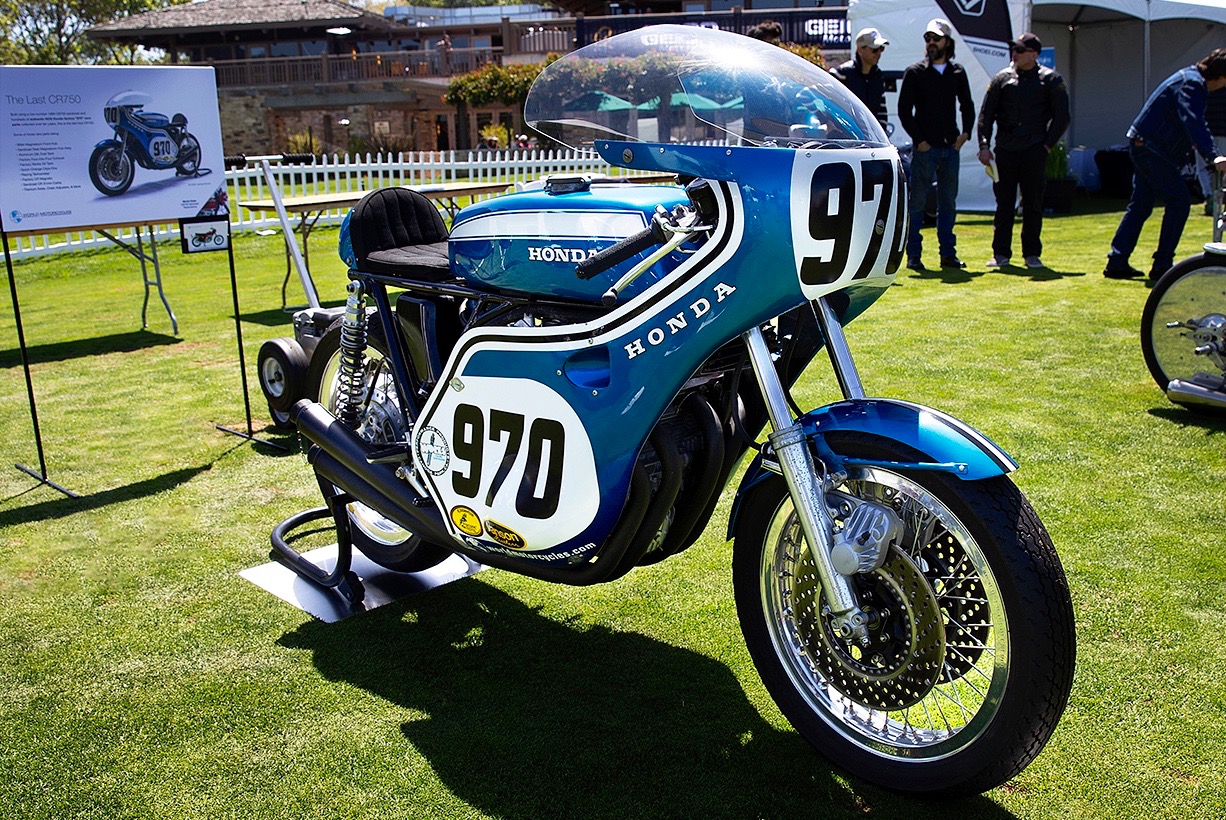 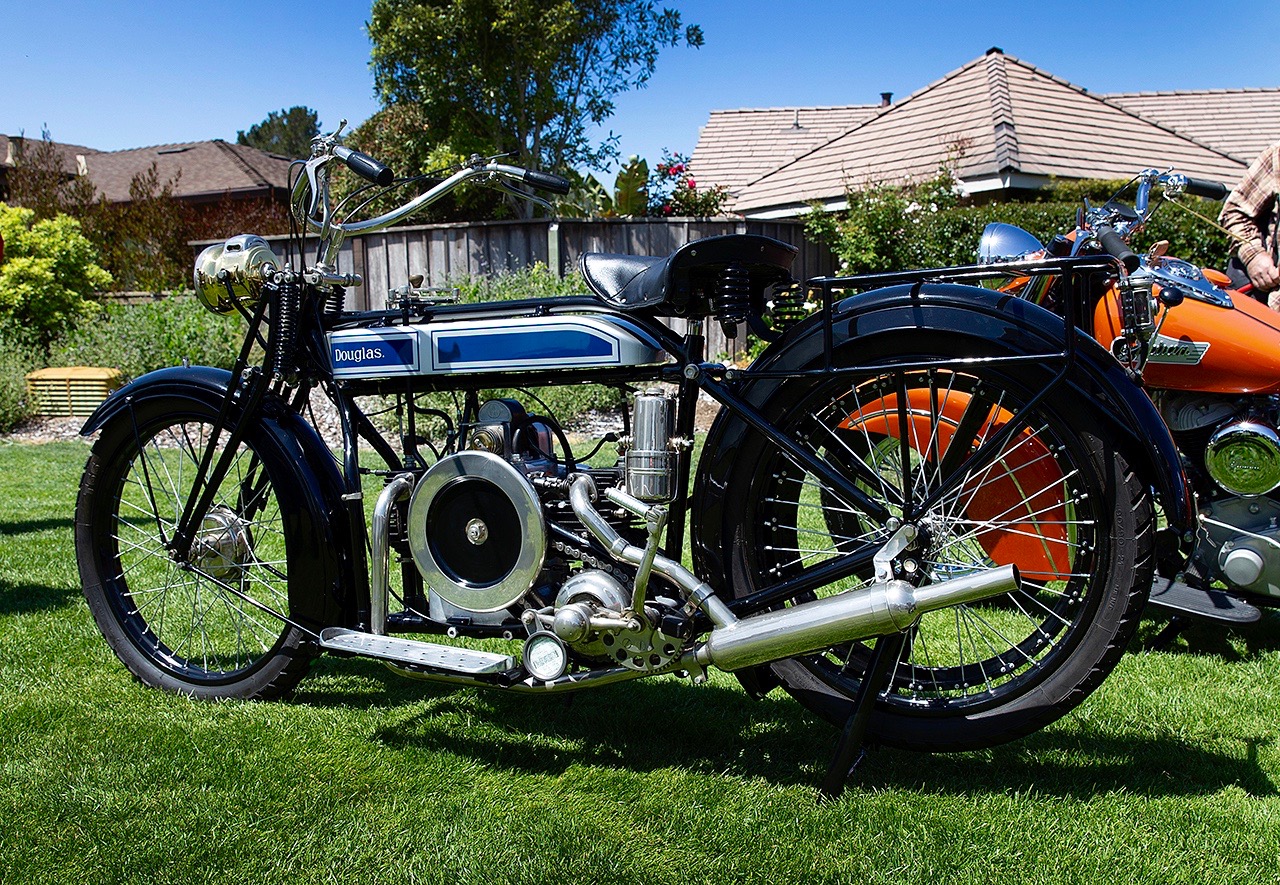 Bill Wheeler’s British gem – the unspoiled ‘28 Douglas 4 ¼ – was the 1st Place winner in the Antique Class. The Douglas was one of the last flat tank era motorcycles. It featured acetylene lights, an horizontally-opposed twin engine with hemispherical heads, and a relatively low center of gravity – making the Douglas a worthy competitor. In 1930 Douglas released the SW5 and SW6 – the Speed Model Douglas motorcycles. 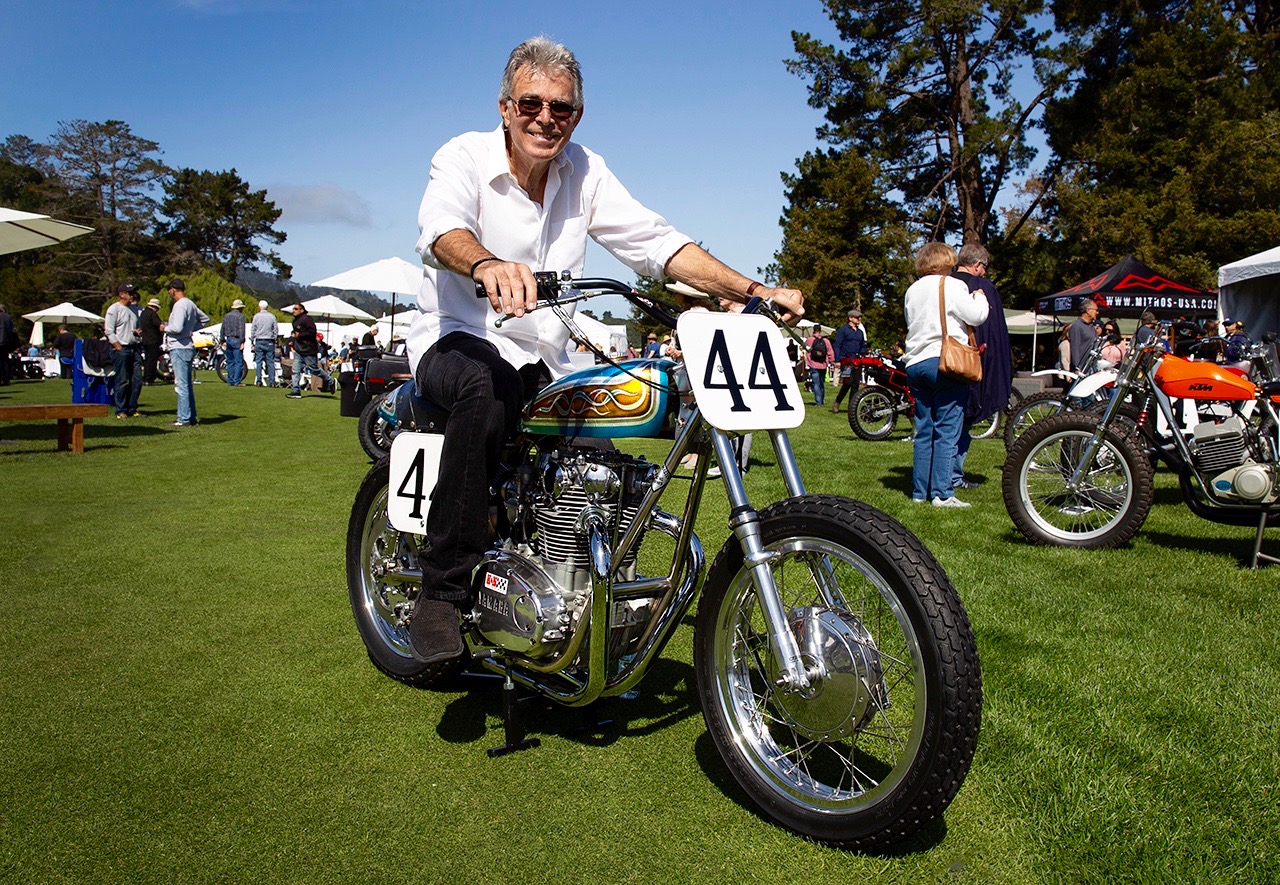 David Christian is a soft-spoken friendly guy. He loves competition machines. Perhaps that’s why he is a co-founder of a Ferrari racing team that set their goal to compete at Le Mans. And, why he acquired a metal-flaked ‘71 Yamaha XS650 that was raced by Rob Robertson at the July 4th Pike’s Peak Bicentennial Race in 1976. Keep your eyes on David if you can; he’s going places. 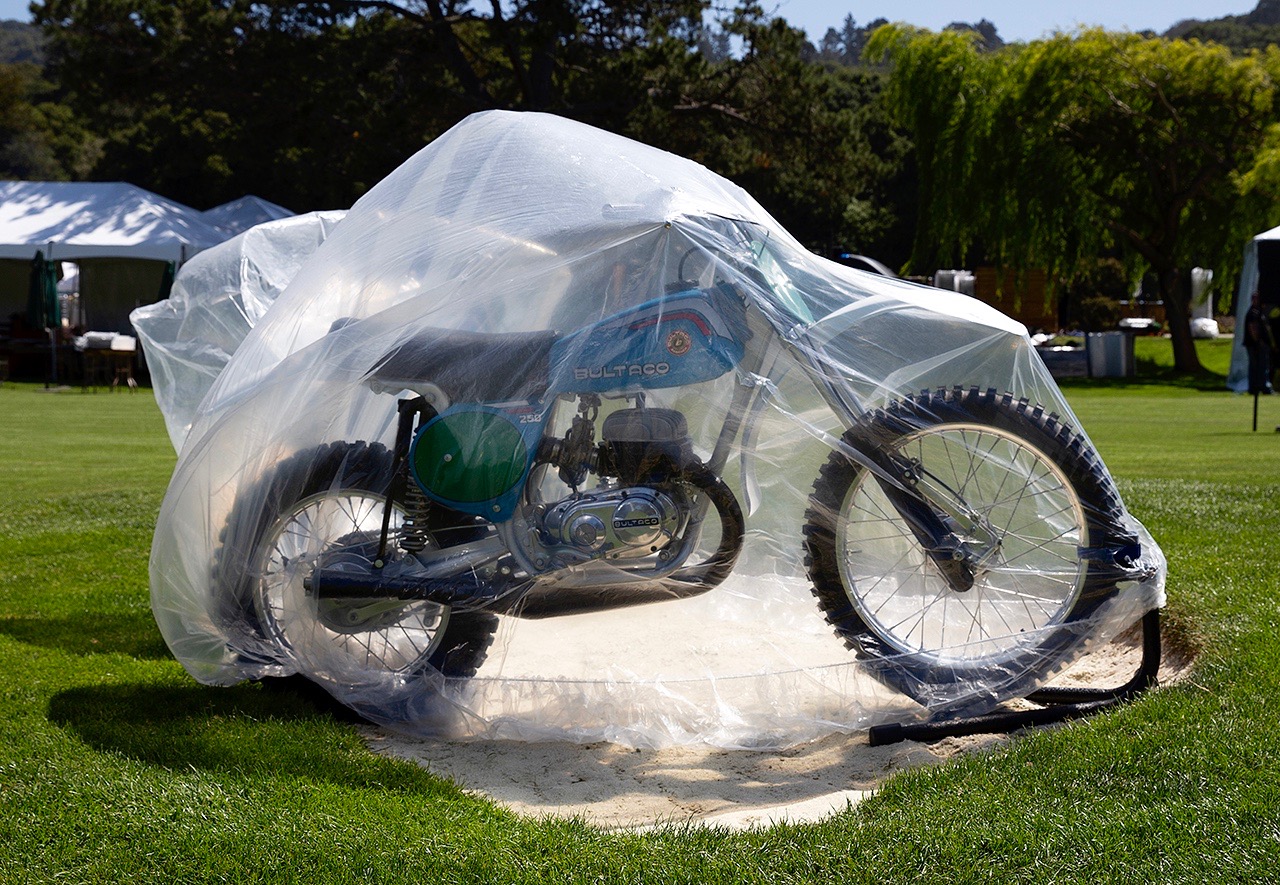 Some of the bikes wrapped-up on Friday to look spiffy for Saturday’s show just weren’t happy being confined. Take this ’76 250 Bultaco that I’m guessing is a Jim Pomeroy tribute bike. Jim was the first American motorcross competitor to win overall victory in the FIM Motorcross World Championship GP. 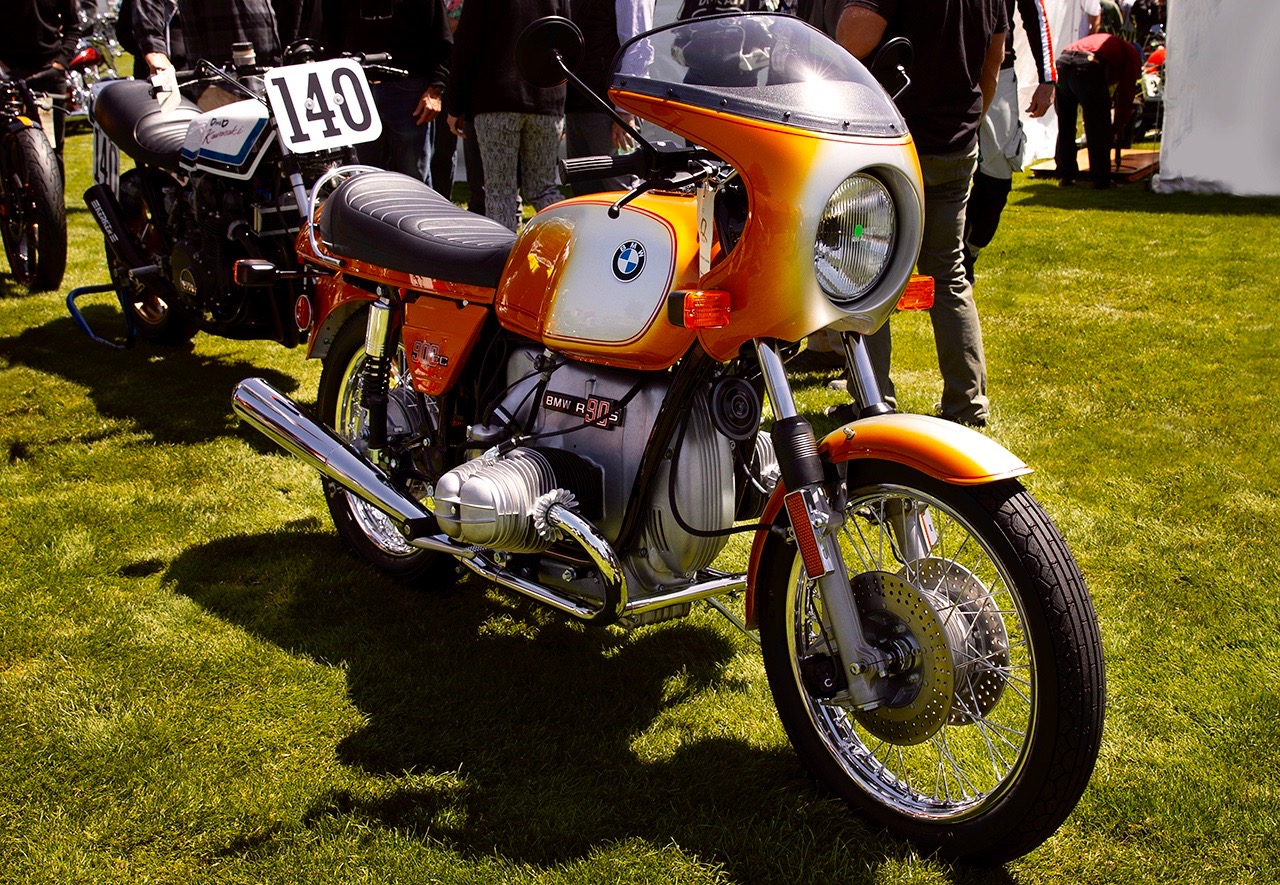 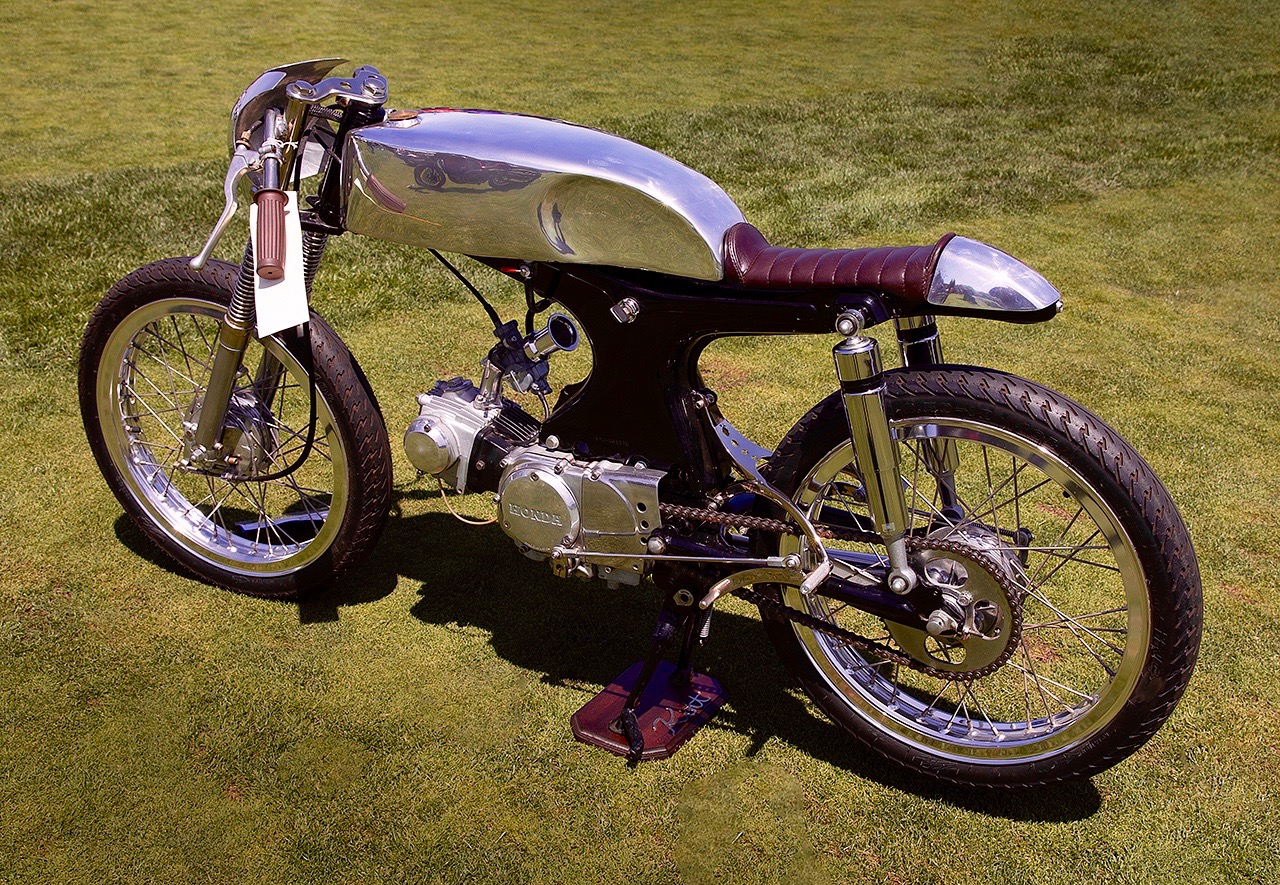 Dustin Kott’s sleek, custom ’66 Honda S90 is a thumpin’ thin Zipster. It raced to 2nd Place in the Custom/Modified Class. Kott’s creations are fast becoming must have diversions for Hollywood honchos like actor Ryan Reynolds who rides a custom Kott Triumph Thruxton. 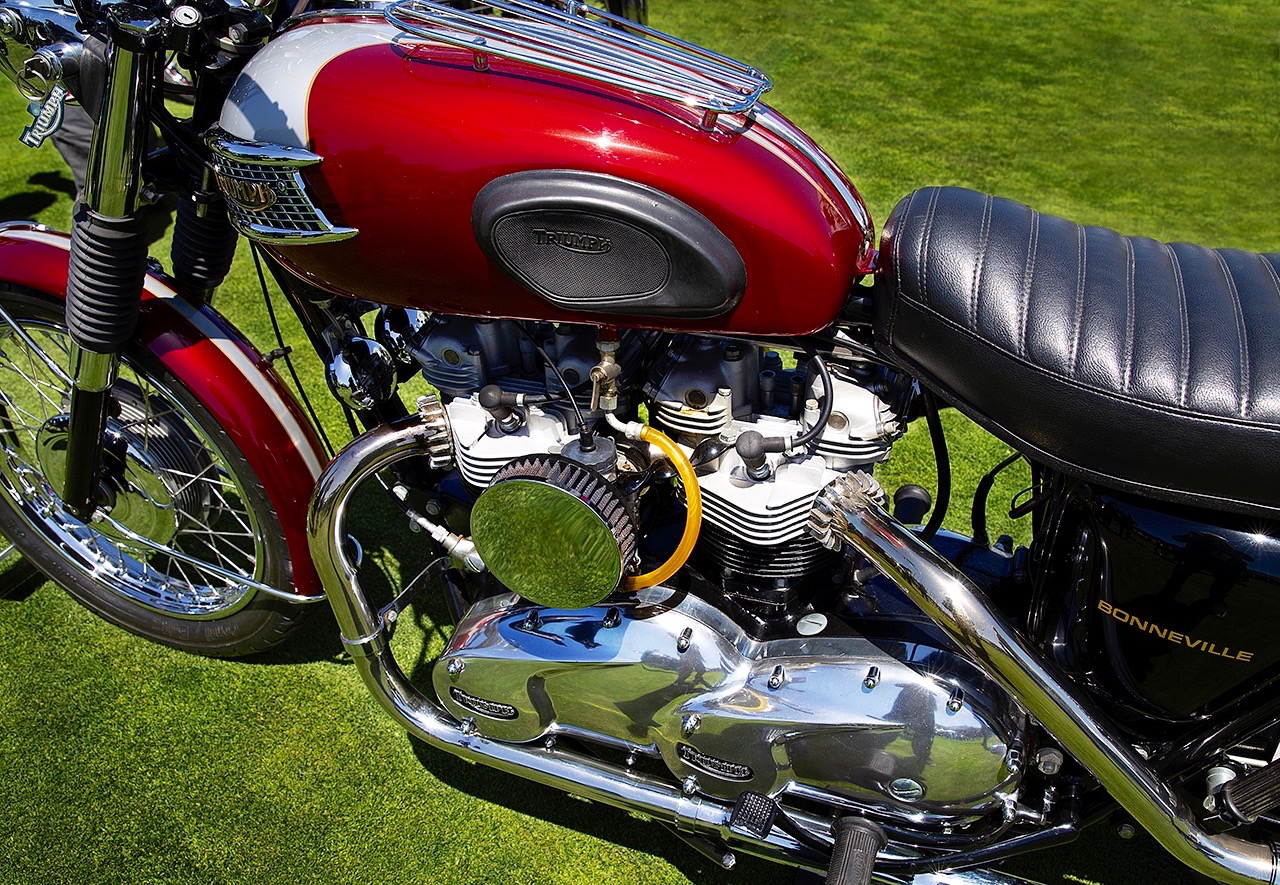 I did a double take when I spotted Steve Pieratt’s ’74 Triumph Bonneville Twin-Twin. The story goes that Bill Hoard built this double-T140-motored bike to convince his wife that a road adventure from Michigan to Alaska was doable on a Triumph. The bike ultimately didn’t go to Alaska, but did wind up years later in Pieratt’s Smyles’ Vintage Motorcycle Museum in Lexington, KY. 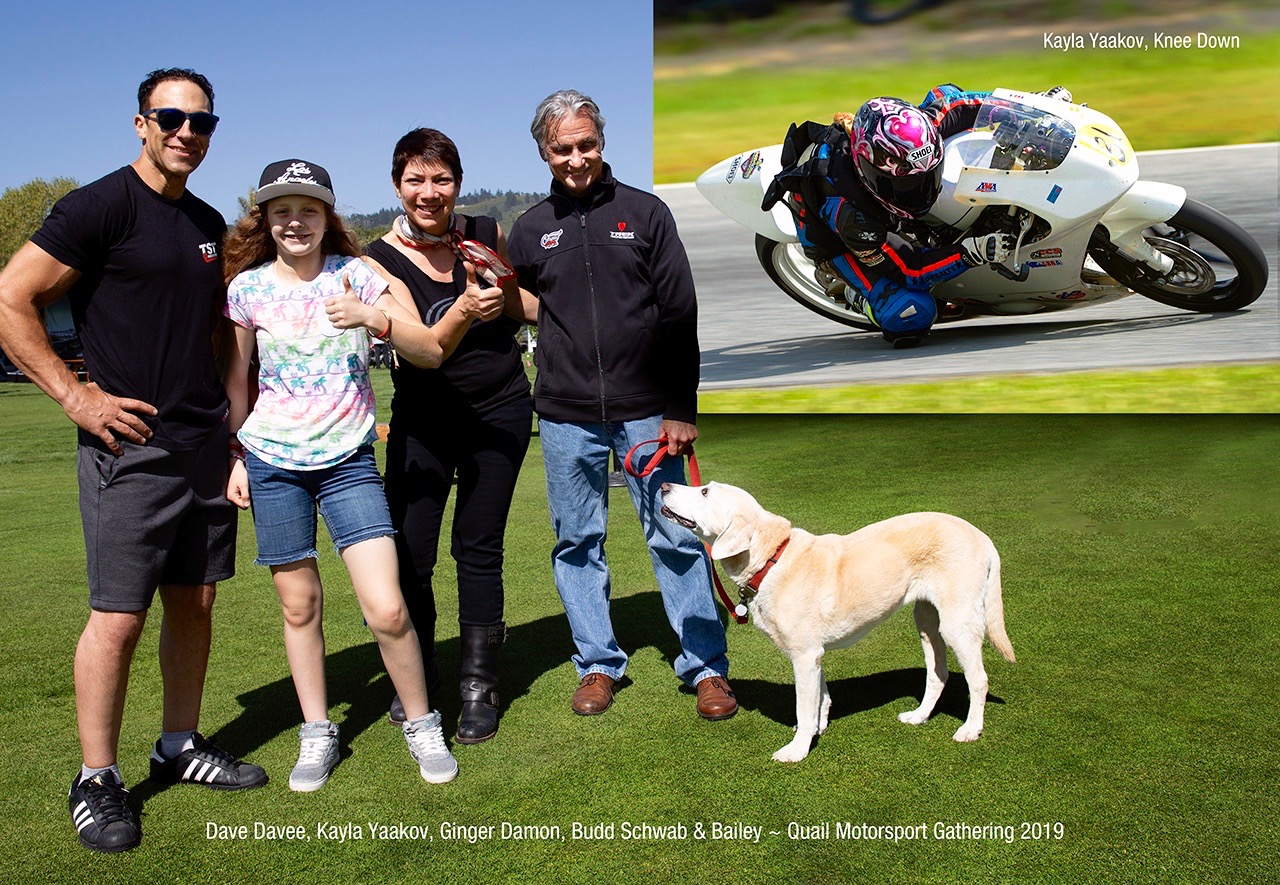 There’s no doubt that it’s the motorcycles that are the big draw to The Gathering. But it’s also the people – who come from all walks of life from all over the world. I had the good fortune to meet Kayla Yaakov – the 11-year-old making headlines in competitive racing. She was later interviewed by Ginger Damon (in black) on the subject of woman riders. Kayla’s dad Dave Davee on the left and winning exhibitor Budd Schwab on the right flank the two. Always at Budd’s side is Bailey, who has been attending The Gathering for 11 years now. Once you go, you’ve gotta’ go back!