Skip to content
Our intrepid photo-journalists at large – Maureen and Mike Matune – bring us highlights from one of the country’s premier shows. 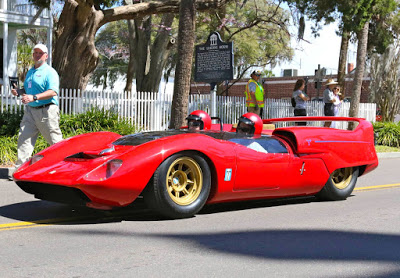 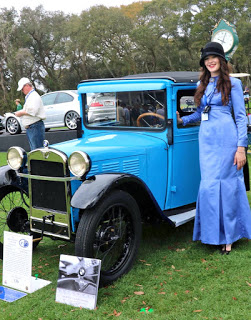 The Amelia Island Concours has grown to include events over several days. Friday brought the Reliable Carriers Eight Flag Road Tour where Concours participants exercised their mounts over local roads, ending up in downtown Fernandina Beach. Here is Mark Moshayedi’s ‘65 Shelby-DeTomaso P70 racer, above. Originally conceived by Carroll Shelby to contest the USRRC championship, it featured a Peter Brock designed body over a DeTomaso constructed backbone chassis. It would never turn a wheel in competition as its proposed seven-liter engine never materialized.

A very appropriately attired Colleen Sheehan, above, right, poses with her ‘30 BMW, an example of one of its first automotive products. A variant of the Austin 7 manufactured under license, the cars are sometimes referred to as DIXI-BMW’s. A 15-horsepower L-Head Four, with a three-speed transmission, provides power for the 1,000-pound-plus machine. It’s a far cry from BMW’s The Ultimate Driving Machine. 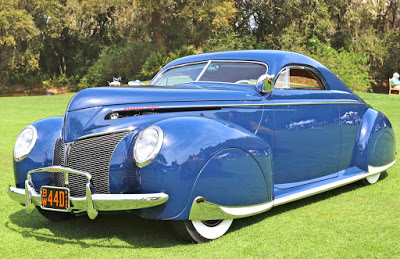 Saturday morning provides a Cars & Coffee event on the same Fairway that holds Sunday’s Concours. Among this year’s participants was this impeccably restyled ’40 Mercury coupe, a four-wheeled, functional work of art created by New Jersey’s Rob Ida. The car has stunning lines, paint and billet trim. Your eye is drawn to the full fender skirts fore and aft, subtle hood cut-out and twin, cowl mounted spotlights. Under hood is a modern supercharged Ford modular V-8 dressed in Ardun valve covers. Cars like this close the gap between American customizers and  European coachbuilders. 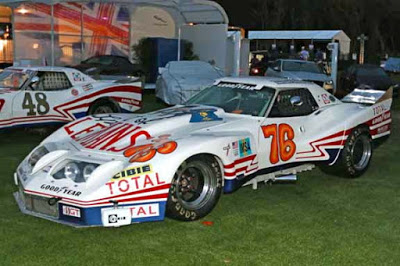 Very early in the morning, Concours participants begin to take their position on the show field. Here ahead of the warm glow of lights coming from a sponsor’s tent sits the Goldin Brothers Racing ‘76 Greenwood Corvette. A Concours Class for Greenwood Corvettes honored the late John Greenwood. He and brother Burt’s Corvettes conveyed a muscular flamboyance that always seemed to stir the American soul. 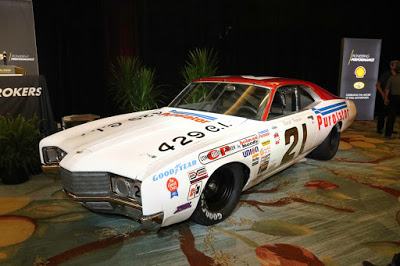 On exhibit during The Power Brokers Seminar and later in the Concours was the Wood Brothers Racing ‘71 Mercury Cyclone, now a part of their Museum in Stuart, VA. NASCAR Hall of Fame inductee Leonard Wood sat on the panel. During its competition years this car won 11 races and took 13 poles carrying names like Pearson, Foyt, Allison and Yarborough. Today it still houses the Ford Boss 429 originally built by the team’s Tommy Turner. The car was one of the most honest cars presented, appearing just as it left the winners’ circle at Rockingham in 1973. 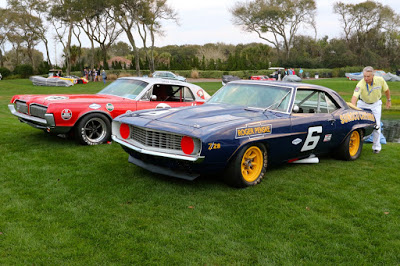 This year we celebrate the Golden Anniversary (50th) of the SCCA Trans-Am series. Here are two cars that played significant roles in Trans-Am history. Sunoco Blue ‘69 Penske Camaro Z/28 of Mark Donahue, winner of that year’s season championship is displayed with the Bud Moore prepared, Dan Gurney driven ‘67 Mercury Cougar that came oh so close to taking the 1967 title. It lost out to its corporate cousin, Boss Mustang.  Today the Camaro’s caretakers are Kim & Bill Ockerland and the Cougar is housed at the 3 Dog Garage Collection. 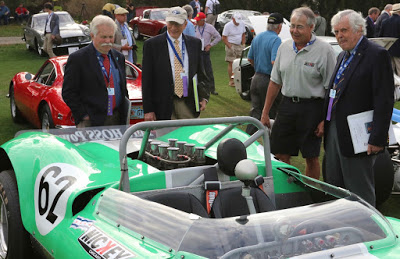 Sharing the Anniversary spotlight this year is the Can-Am series. One of the early competitors was the ‘65 Huffaker Genie Mk 10 B (AKA Nickey Vinegaroon) of Gretchen & Rom Stephani. Here the car is judged by Wayne Carini of Chasing Classic Cars, Chuck Cantwell, the GT350 Project Manager at Shelby-American and Brian Redman, noted racer, event organizer and author. Redman was signing his book, Daring Drivers, Deadly Tracks at the Concours. It is available at http://www.gorace.com/Brian-s-Book.html . The book is well written, wonderfully illustrated and well produced.

An integral part of the Amelia Island experience are the auctions surrounding it, including Sotheby’s event held at the Ritz Carlton. Among their eye-popping offerings was this ‘39 Mercedes-Benz 540 K Spezial Cabriolet A by Sindelfingen. The car was once owned by noted collector Otis Chandler. Under his ownership, the car was restored and went on to win Best of Show at Pebble Beach. It very much personified the highest standards of the Mercedes marque and the coachbuilding art. The hammer came down at $2,800,000! 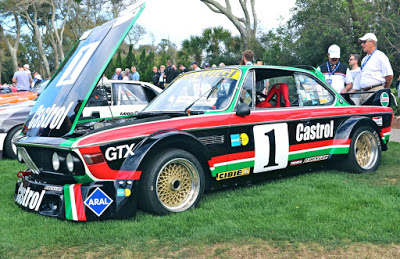 The 2016 Amelia Island Concours Honoree was racing superstar, Hans-Joachim Stuck. With experience in everything from Touring Cars to Sports Cars to Prototypes and Formula 1 & 2, the Concours was able to display a large collection of cars with which he has been associated with in his racing career. One example was Mary & Steve Walker’s ‘76 BMW CSL which served as Stuck’s entry in the Nurburgring round of the 1976 European Touring Car Championship. Stuck proved as gregarious and fun loving as his reputation, telling many memorable stories during Saturday’s BMW Drivers of the Ultimate Driving Machine Seminar. Thanks to Kelly Services for their sponsorship of that most memorable session. 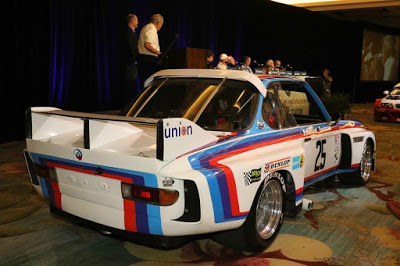 The BMW Seminar showcased another car associated with Stuck’s racing career this one a CSL from the BMW collection. The seminar was moderated by racer Tommy Kendall and featured a cadre of drivers from BMW’s most successful racing program, including Dave Cowart, Boris Said, Bill Auberlen, John Fitzpatrick, David Hobbs, Sam Posey, Brian Redman and Hans Stuck. All held the audience’s attention as they related stories of their exploits racing BMWs. 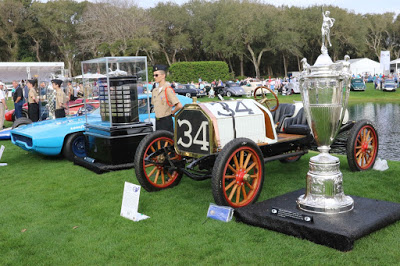 Amelia Island stepped out from traditional Concours fare just a little to focus on rare, distinctive race trophies. The full display stretched around part of the water hazard. Here is a section of that display. Closest to the camera is the Wheeler-Schebler Trophy presented to the leader of the Indy 500 at the 400 lap mark. It was retired in the 1930s when cars owned by Harry Hartz won it three years in a row. Behind it is the Harley J. Earl Perpetual Trophy presented to the winner of the Daytona 500.  Junior NROTC cadets stand sentinel over the most impressive collection of hardware rarely seen far from their respective victory lanes and podiums. Cars epitomizing the ones that competed for and won the trophies add context.