Skip to content
Real 1965-1966 Shelby GT350 & GT350R Mustangs are showcased in this year’s Heritage Display for the track’s Featured Marque. 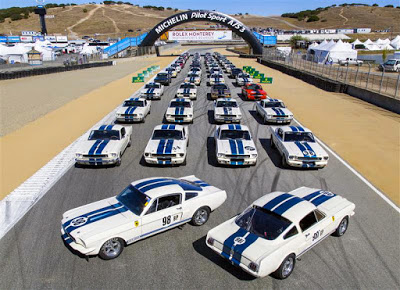 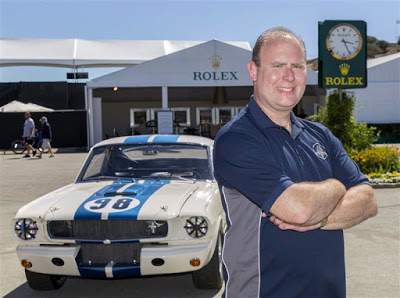 Today, when John Atzbach of Seattle drove his ‘65 Shelby GT 350R Mustang through the turns and straights of Mazda Raceway Laguna Seca, it was not because he was rehearsing for the upcoming weekend of racing at the Rolex Monterey Motorsports Reunion. Rather, he was accommodating a special photo shoot – squeezed between practice sessions for 15 groups of historic cars here – with three of nine GT 350s (from 1965 and 1966).

“I feel very fortunate to be in possession of this remarkable car,” said Atzbach, above, of his chassis #002, which is reportedly worth well north of $1 million dollars. But was dressed in grey primer and rust, having spent decades on a trailer in an open barn, when Atzbach acquired it two years ago. It was the factory’s team race car for the first half of the 1965 season, driven by Ken Miles and others, taking four seconds and 12 firsts in 16 races. Then it became a test and development car for all other R models built after that.” 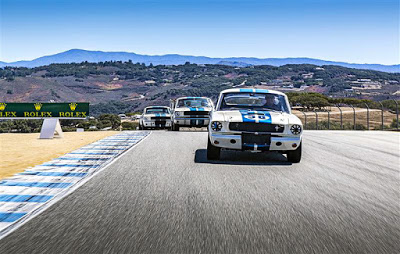 “I enjoy so much sharing this car with the American public and especially those who know the history of the car – why it is important and how it has impacted the automobile industry,” said Atzbach. His sentiments are shared by many of the owners here, especially those among the impressive group of 38 Shelby GT 350 Mustangs that will race on Saturday.  ”This is more than just a bucket of bolts,” said Shelby GT 350 Brand Manager Jim Owen. “There is an attitude, there is a feeling…there is a joie de vivre around this car that really makes it special. That attitude and performance of the car is what has made it an icon 50 years later.” 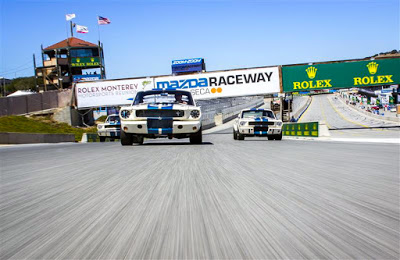 Though the GT 350 is celebrating half a century of glory, there is a century’s worth of historic cars competing at the Rolex Monterey Motorsports Reunion, which serves as one of the cornerstones of the Monterey Peninsula’s Classic Car Week. The event continues with racing for eight classes today and seven on Sunday.