Skip to content
The Amelia Island Concours was graced with sunny skies, warm temperatures and the most eclectic assortment of important cars – from hot rods to classics. 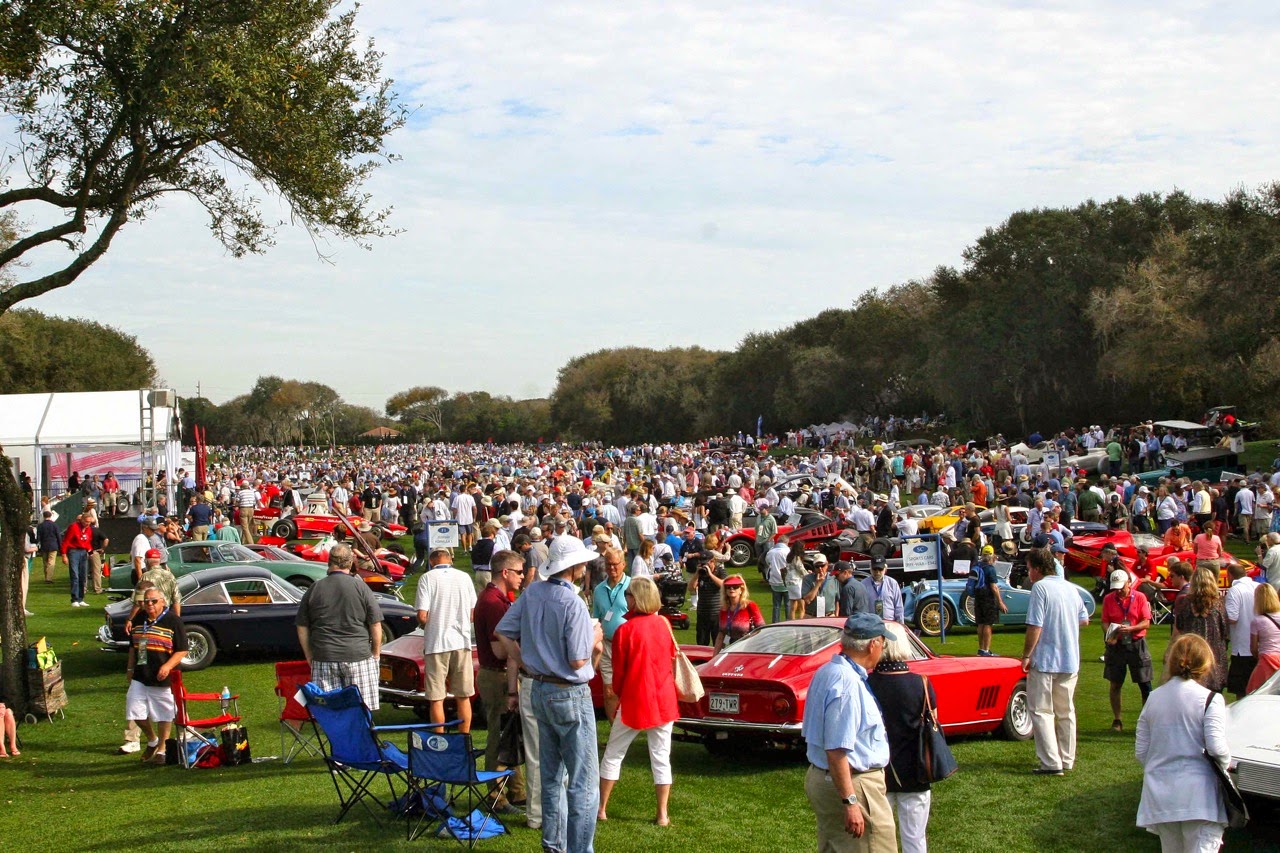 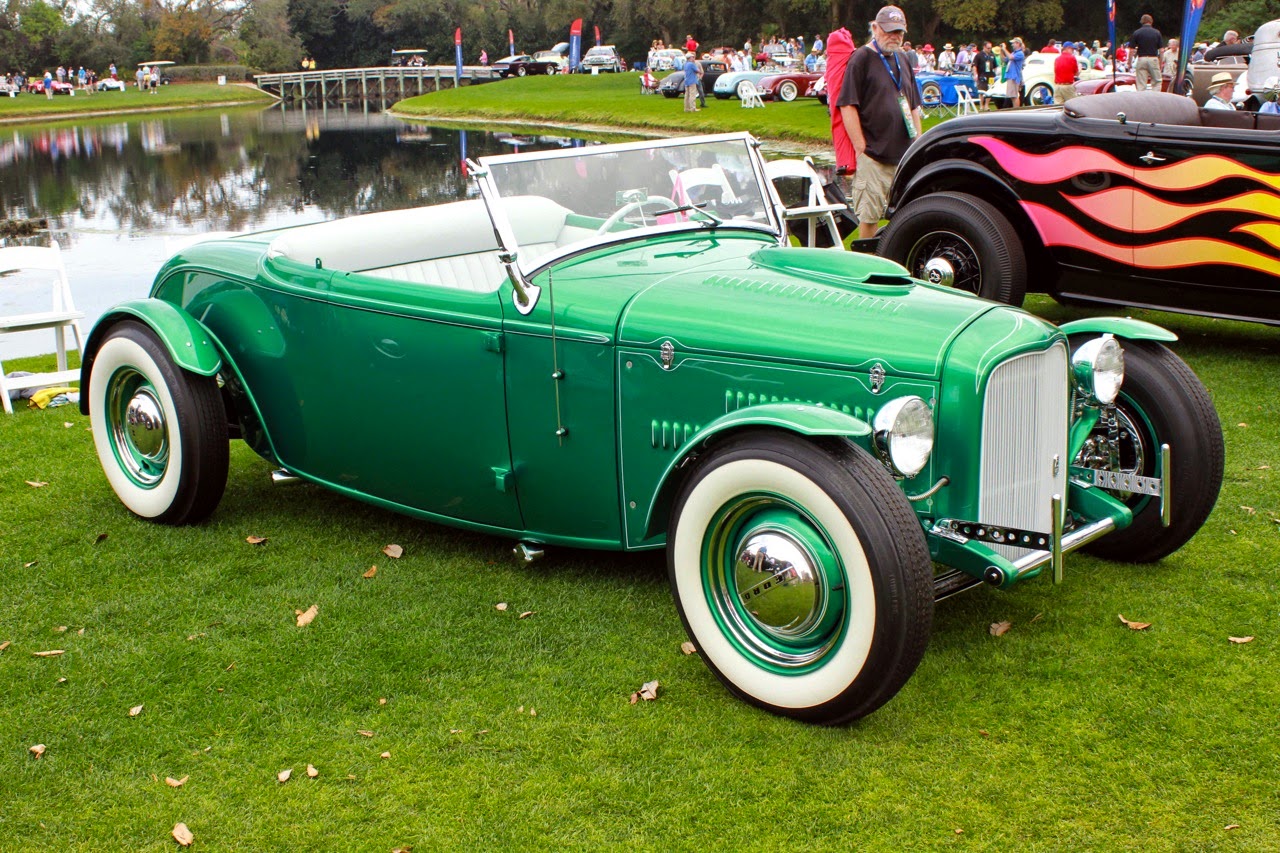 Who would have thought that original gathering of 160 cars just 20 years ago would double in size to include a show field chock full of rare, fun, interesting and significant cars? Our congratulations to event founder and chairman Bill Warner, his staff, volunteers, supporters, judges and entrants who helped turn a dream into a reality. The East vs. West battle as it applies to the classic hot rod will always be the subject of spirited debate. Our friends at 3Dog Garage entered cars on both sides, including the ’32 Ford, above, originally constructed by Ray De Fillipi. It appeared on The Adventures of Ozzie and Harriet with sons David & Ricky. When they wanted to buy the car, their father famously quipped, “No 1932 Ford is worth $3,000”. 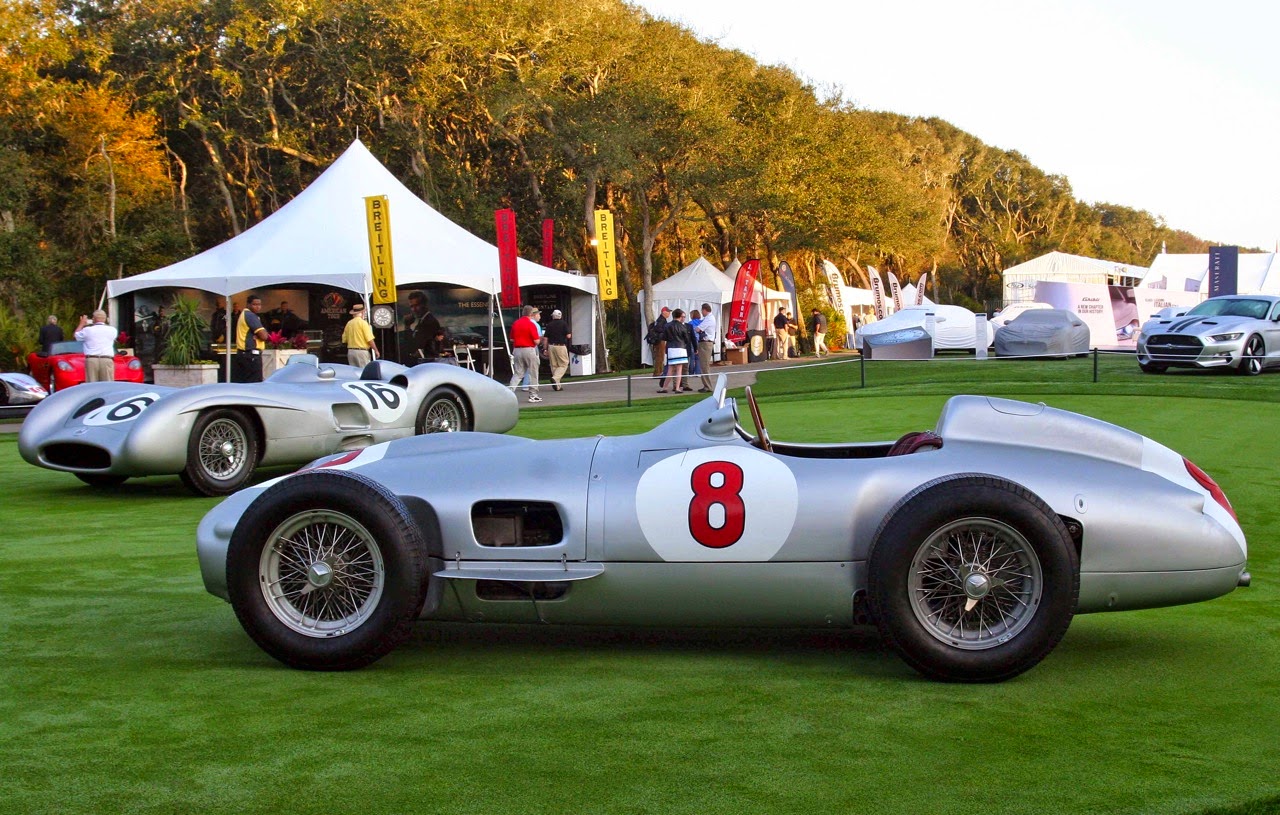 Sir Stirling Moss served as this year’s honoree, just as he had done for the first event in 1996. Lady Moss and he were seen throughout the weekend graciously greeting his innumerable fans. On the show field was gathered a collection of over 25 cars he raced during his illustrious career. Among them were these two examples of Mercedes’ championship winning W196. Mercedes-Benz Classic’s short wheelbase car, foreground, was used on shorter circuits such as Monaco. At the rear is the Indianapolis Motor Speedway Foundation’s streamlined car originally seen on high-speed GP circuits like Monza. 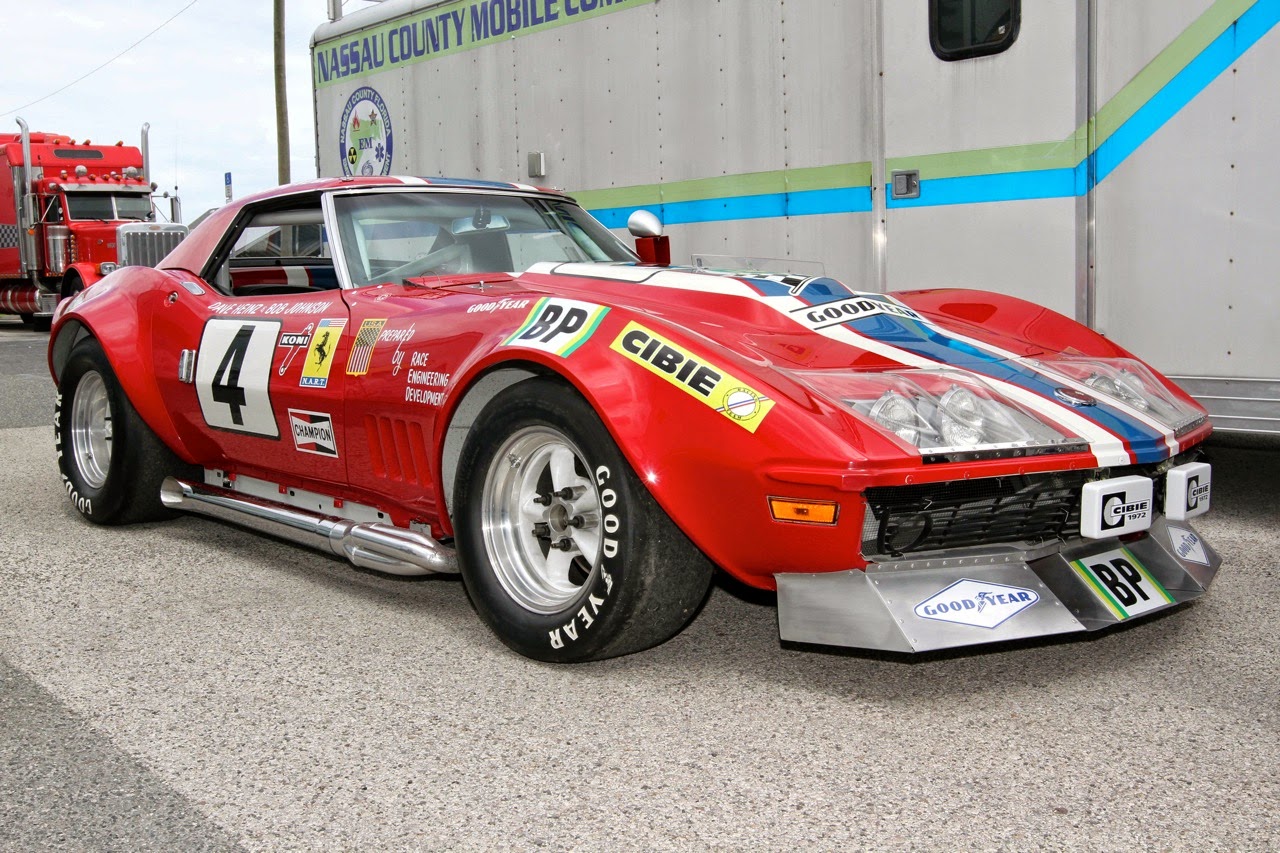 To convey an image of raw power, it is hard to top a Corvette L88 racer and the AICE presented a collection of these cars. Mike Yager’s 1972 example has all the styling cues, such as endurance headlights, scooped hood, front spoiler, fender flares, etc. Originally converted from a wreck, this car would hold the honor of being the highest-finishing Corvette at Le Mans for a number of years. Thanks to Mike for spending time explaining all of this to us. 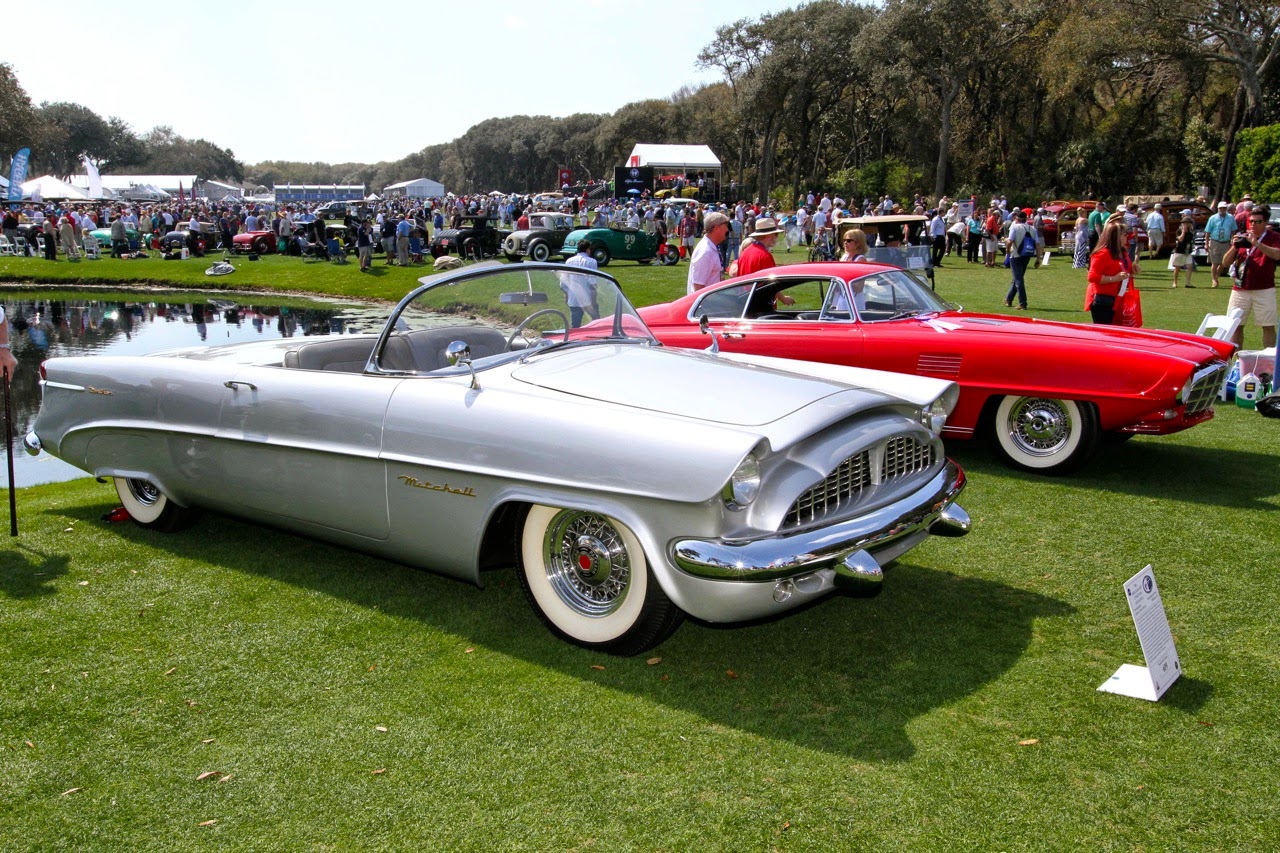 As America prospered in the 1950s, automakers turned to the concept car to bolster their appeal to the motoring public. Designs usually tended toward creating the impression of a car as more than transportation. The red coupe is the DeSoto Adventurer ll, designed by Chrysler stylist Virgil Exner, featuring bodywork by Ghia. The silver convertible is the Packard Panther Daytona, styled by Dick Teague and constructed by Mitchell-Bentley. 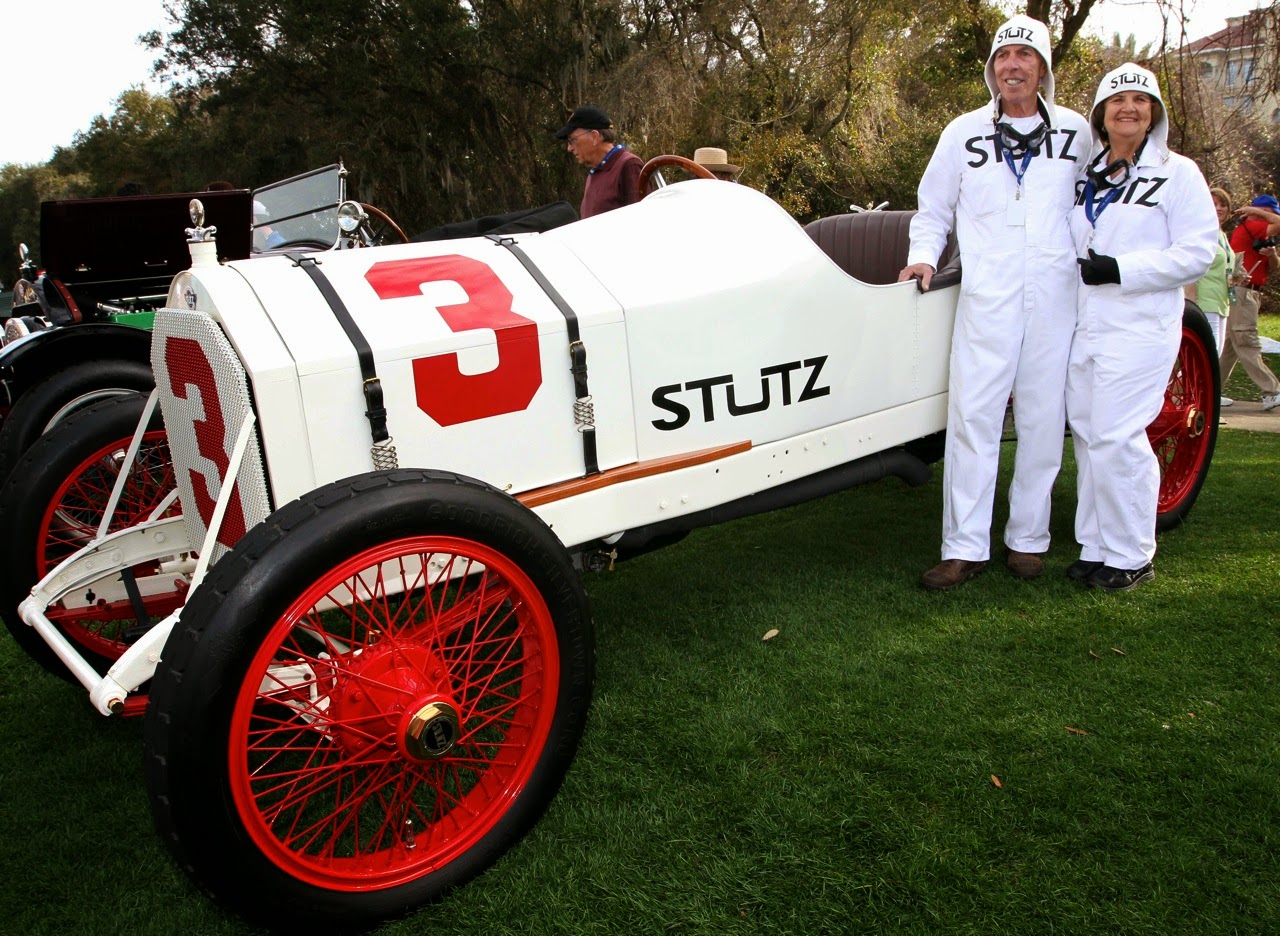 Judy & J. C. O’Steen in costume with their ‘14 Stutz raceer. Stutz entered three of these beasts powered by 434-inch, T-head, four-cylinder Wisconsin engines at Indianapolis. Barney Oldfield was at the wheel of #3. Harry Stutz married the cars’ racing success to his road cars. 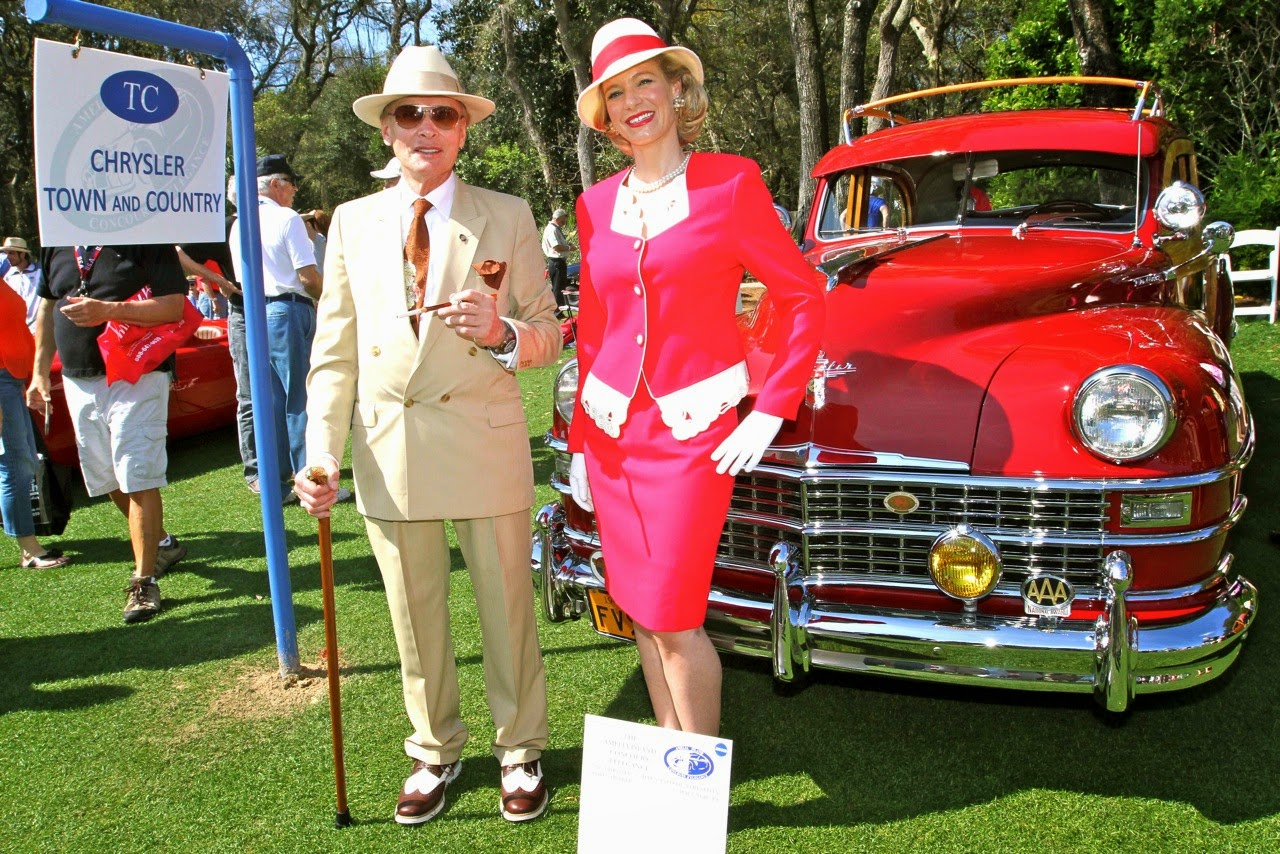 Production of Chrysler’s Town and Country line extended from the early-1940s to the early-1950s. Wood had been used structurally since the start of automobile production. Chrysler used it more as a styling element, pairing a car’s color and lines with the rich, warm feeling of wood. Loren Hulber further conveyed that aura by exhibiting the fashion of the day along with his ‘47 Town and Country sedan. 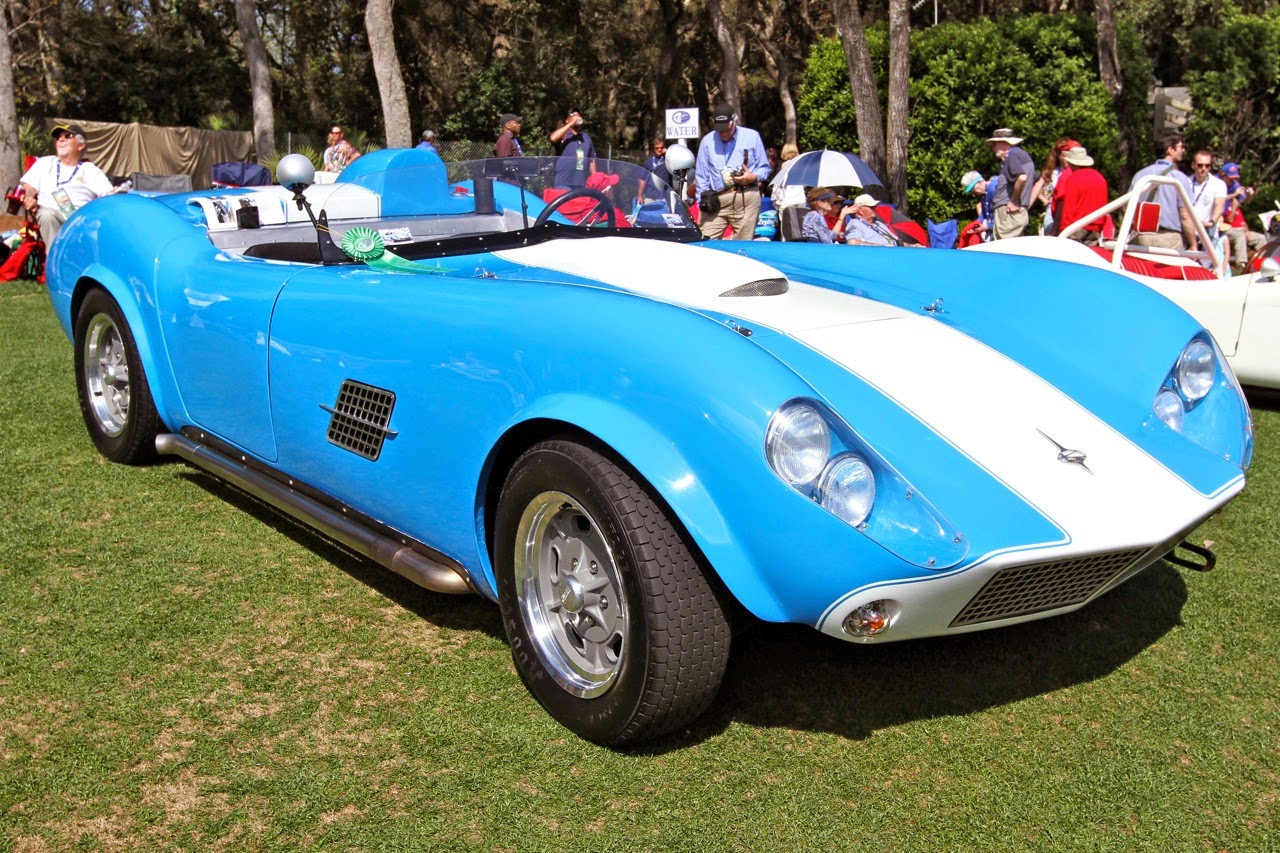 When enthusiasts couldn’t get what they wanted, ingenuity took over to fulfill sports car dreams.  Legions of enthusiasts along with countless entrepreneurs combined to create what AICE titled “Forgotten Fiberglass”. The Neidell’s Kellison J-5 Roadster serves as an example of the genre, representing a “factory” car built over a bespoke frame. It serving as a Bonneville racer, street car and drag racer. Today it’s street driven and vintage raced. 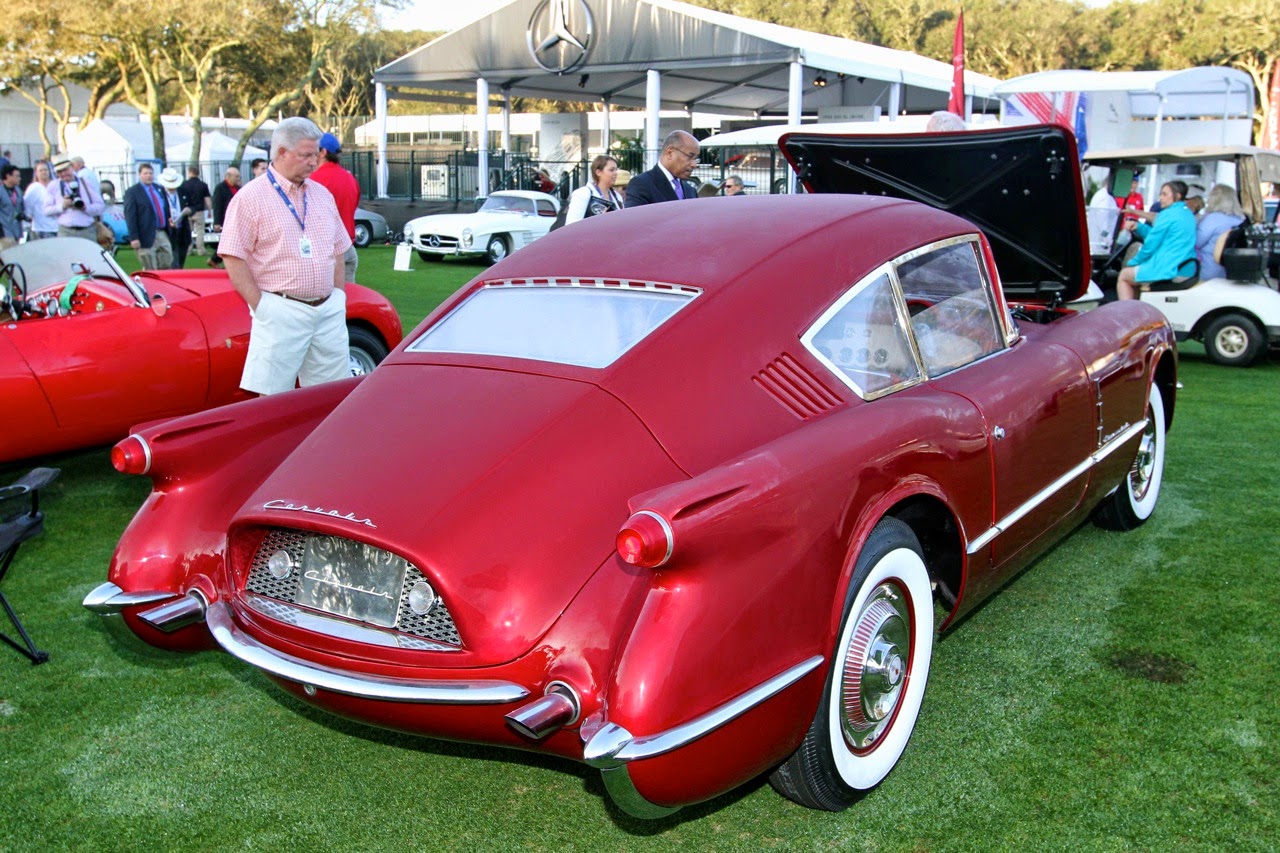 In 1954 Chevrolet showed this Concept at Motorama shows in New York and Los Angeles. While production Corvettes were all open roadsters, this fastback coupe showcased a variety of styling innovations for Corvettes. Called the Corvair, its roof tapers back to a chrome trimmed panel with the license plate. It wouldn’t be until 1963 that GM would add a coupe to the line. Brett Henderson and Mike Terry built this recreation, crafting numerous custom panels. 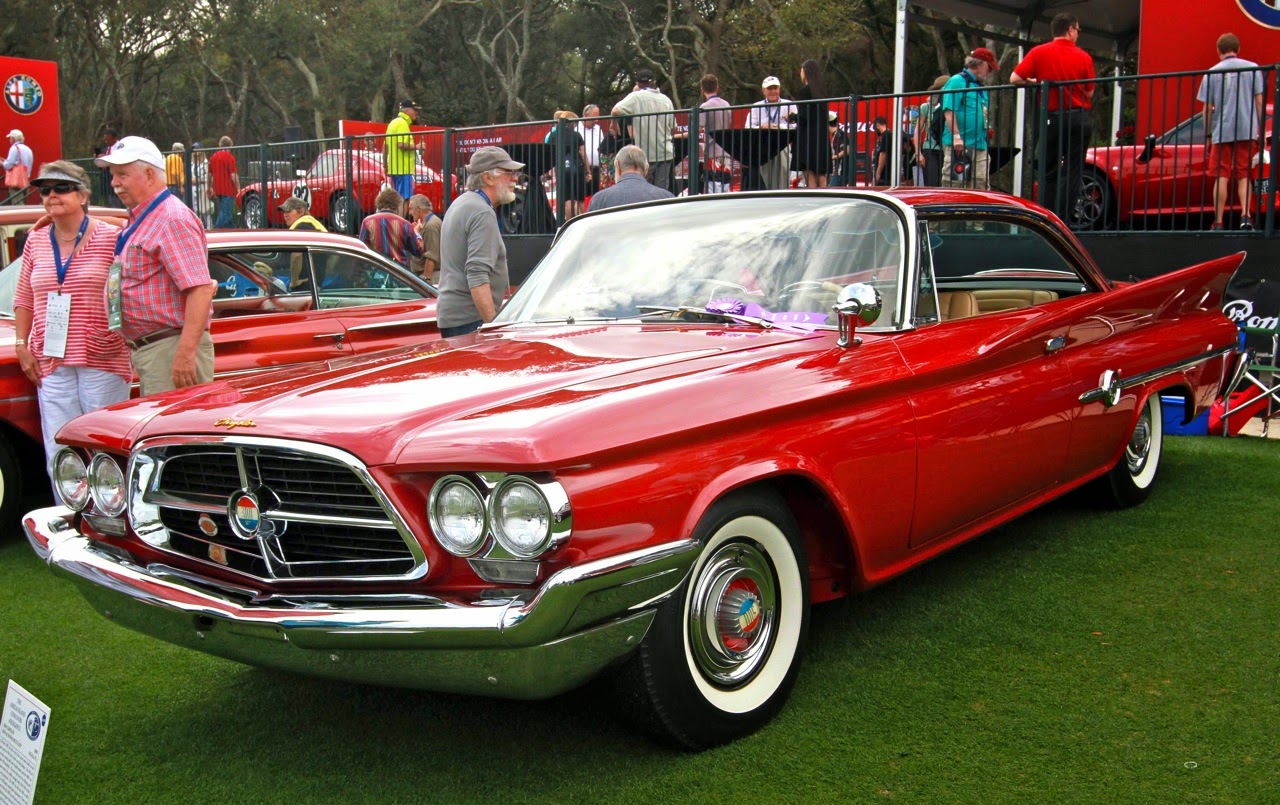 So much attention is paid to compact and intermediate Musclecars, that we almost forget about full-size muscle. Donna & Don McCullen’s ‘60 Chrysler 300F is a great example of a big performance car. This 300F is powered with a 413-inch V-8 with a twin-four-barrel. crossram induction system. The 300 “letter series” were built from the mid-1950s to the mid-1960s. 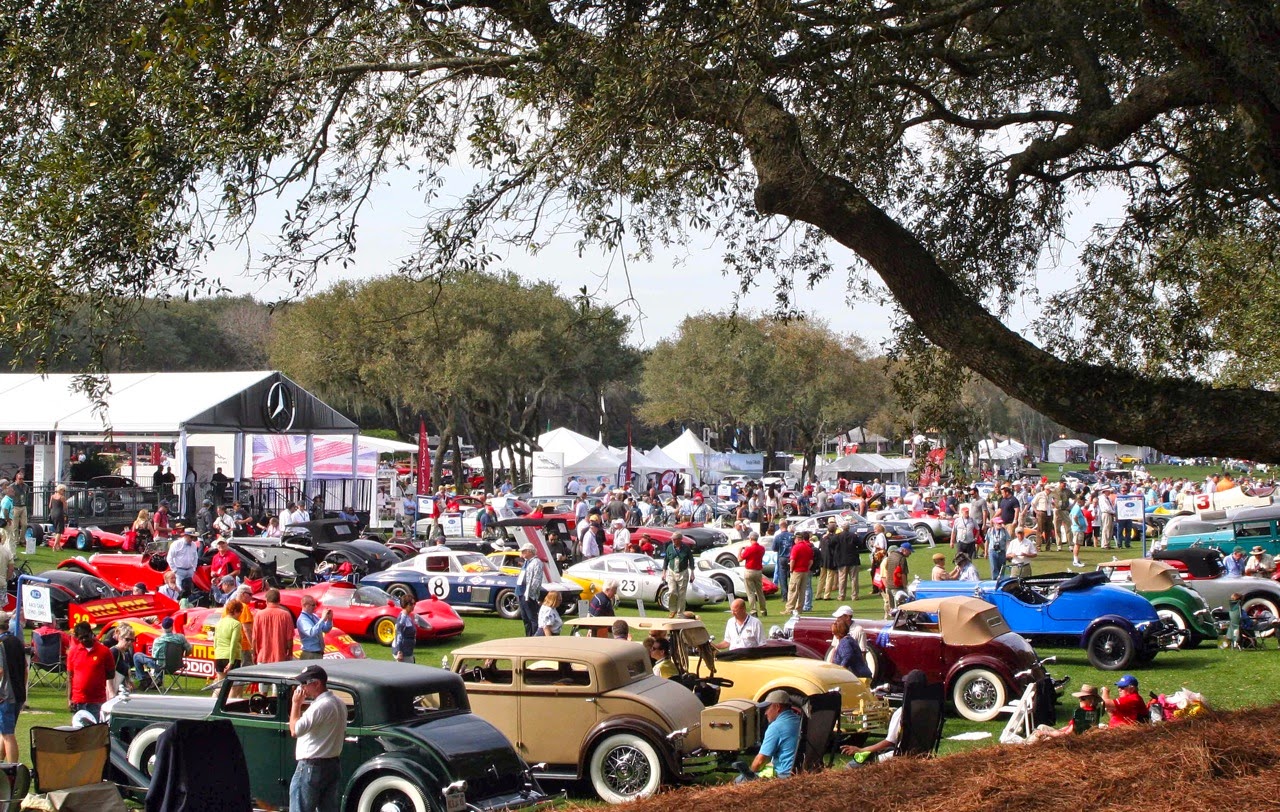 Trying to edit more than 2,000 photos for this feature was a daunting task. Single photo, above, contains a small portion of the show field, with Ferrari F1 cars, racers and classics. Car Guy Chronicles editors thank Nina Snopkova and Bill Warner for the courtesies shown to the Matunes during the Concours.  On behalf of a grateful public, thanks to all involved for helping raise more than $2.5-million for those in need over the Concours’ history.