Skip to content
It’ll run 197 mph with the top down. What’ll that do to your ‘do’, asks Road Test Editor Howard Walker. 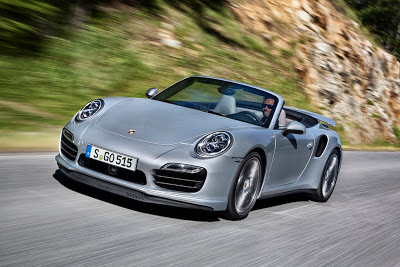 Ponder this for a sec. Porsche has just announced its brand new 911 Turbo S Cabriolet that has a top speed of 197 mph. My question: What does 197 mph actually do to your follicles?
After, say, two miles do you have any left? In response, maybe there should be a Hair Club
For Men Special Edition model so you can swing by for follicle replenishment after every
190-mph top-down run?

Or maybe Brylcreem should offer a lifelong supply of its magical ‘A Little Dab’ll Do Ya’ pomade with every 911, so drivers can slick down their ‘do’ before a high-speed drive? 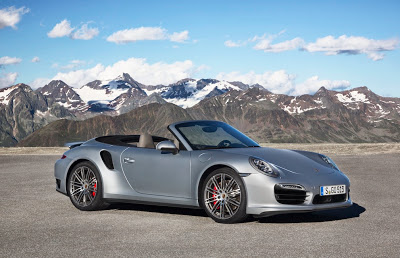 I just know that every time I’ve time I’ve gone over what we Brits call ‘The Ton’, or 100 mph,
in a ragtop for a sustained period, it’s felt like Hulk Hogan tugging at my roots and someone directing a hose pipe at my eyes! 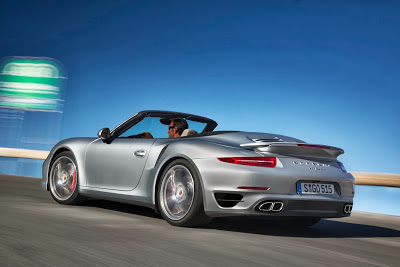 And what a beast. The ‘S’ delivers a staggering 560 horsepower and 553 pound-feet of torque from its twin-turbo 3.8-liter flat-six nuclear reactor hanging out the back. That’s sufficient to catapult it from standstill to 60 mph in three seconds flat. Even the non-S version, with its 520 horseys and 487 torques will cover the zero-to-60 dash in just 3.3 seconds, or 3.1 secs
if you order up the Sport Chrono package. 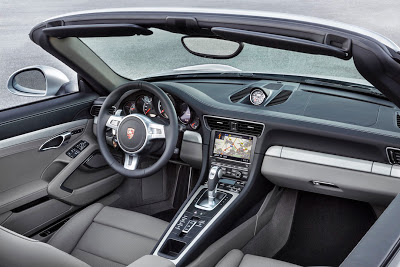 Talking of time, the other key number with this new drop-top concerns that multi-layered, magnesium-framed retractable roof. At the punch of a button, it’ll descend or levitate in just 13 seconds, and at speeds of up to 30 mph. Perfect when raindrops start a-fallin’ just as you’re moving off from the stop light. 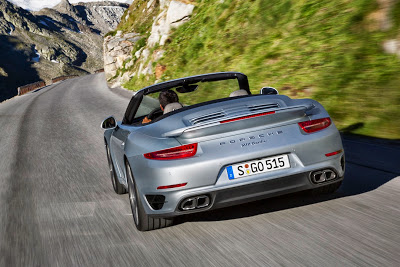 And just in case you encounter a pesky corner as you’re slowing down from yet another 197-mph, top-down flat-out run, this new 911 Turbo Cab features active all-wheel-drive enhanced by rear-axle steering, a locking differential and torque vectoring. Plus that other essential ingredient, humongous brakes!

Porsche plans to officially debut this flagship addition to the new 911 family at the Los Angeles Auto Show in November and start delivering it to customers early next year. Perhaps it’s another reason for going for a Bruce Willis/Jason Statham shaved-head look – no hair to lose at 197 mph!

For the latest information on the Porsche 911 family, please visit http://www.porsche.com/usa/models/911/911-turbo-s/