Skip to content
Have you ever wondered what it was like to drive a production-based sports car in the golden era of American road racing? Me too. Now I know, blogs Stephen Cox.

“I don’t want to retire and sit around a golf course,” Rick Baldick said to me, leaning over the balcony and looking down at his team’s car screaming toward Turn 1 at 110 mph. “I’d rather
be here. This is what I love.”

The Autobahn Country Club in Joliet, IL is just that, a figurative golf course for motorsports addicts. It was here that Team 45 was testing their vintage ‘69 Corvette last Friday in preparation to race this season with the Sportscar Vintage Racing Association.

Although Rick jokingly refers to the team as “a bunch of old guys burning up 100-dollar bills,” in reality their sport is much, much more. The goal of vintage racing is to re-live the glory days of American road racing as accurately as possible. The ‘69 Corvette that the team had generously invited me to drive was an original, production chassis machine. Other than safety modifications, it was very similar to what race fans saw on road courses across America
in the 1960s/ early-1970s.

Built by team members Jim Mattison, Doug Wesch, Dave Tiura and Baldick, it’s well constructed and obviously a labor of love for the delightful, easy-going people who comprise this team. Jim’s son, J. B., is an outstanding driver who pilots the car at most events. 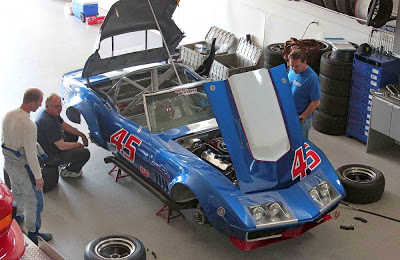 The team’s headquarters is at an amazing facility built by Mike Origer and his partners on the Autobahn grounds. It was more like a hotel than most of the racing garages I’ve seen, featuring showers, sleeping quarters, balcony and an outdoor gas grill. Plus a bar stocked with sufficient fluids to make Snake Pit fans at the Indianapolis Motor Speedway green with envy!

The car’s equipment list was simple enough. Power comes from a 580 horsepower small-block Chevy, not much more than was commonplace in late-1960s B/Production Corvettes. It rides on bias-ply tires and stock suspension has been beefed. Okay, so they use modern synthetic motor oil. Can’t blame them for that. What else are these guys doing that wasn’t being done
in the summer of 1970? Not much.

Mike Origer – who is a fine driver in his own right and had to leave early for a race the following day – warned me in advance that 1960s era racecars were a handful.

“Have you ever been on a snowmobile?” Mike asked.
“Yes.”
“That’s what this car handles like.”
“Serious?”

Yes, Mike was serious. My short stint in the car was at a modest pace (Racing Etiquette 101: Do not attempt to set a land speed record in a car you’ve never sat in at a track you’ve never seen before, thereby returning the car in one piece). However, I did use enough pedal to put the car sideways in the corners and hit 116 mph on the backstretch according to Team 45’s whiz-bang data acquisition. And it did, in fact, handle like a snowmobile wallowing through three-foot
drifts in January. It was truly awesome.

You just can’t keep that car under you. It washes, wallows, slips and slides all over the track and it’s a barrel of fun. These old 1960s-1970s Corvettes had to be driven every minute. If you’re driving the car properly (J. B. was – I wasn’t) you’ll never really come out of a drift except for a few moments on the longest straights, and even then the car is tracking like a 1980s
front-wheel-drive car.

The tires are the main culprits. Bias-ply tires have a mind of their own. I’d driven plenty of bias-ply tires on ovals for many years, but my entire road racing experience has been on radials. So this was a real learning experience.

The tires have fairly soft, tall sidewalls that lean in the corners. Unlike today’s low profile, “point-and-shoot” radials that respond as quickly as your mind can absorb the data, bias-ply tires take their sweet time. They’re squishy. And they really don’t grip that well.

Too much grip is actually more of a problem in auto racing than it is a solution. When cars slide easily, the racing groove becomes wider and the driver’s talent becomes a greater factor in the outcome of the race. So a universal move back to bias-ply tires in auto racing wouldn’t be a bad thing. It’ll never happen, but it sure wouldn’t hurt my feelings if it did.

The engine in Team 45’s Corvette sings beautifully. I didn’t think anything was louder than my stock car. I was wrong. The Corvette’s side pipes registered 9.3 on the Richter scale! The small-block pulls like a freight train at 6,500 rpm in Fourth gear even into triple digit speeds.

The steering wheel is a little too far forward and places a bit more fatigue on the shoulders, especially combined with wide tires that naturally resist turning. The Corvette’s brakes were a bit spongy since the team was experimenting with new pads and brake bias settings.

I found the Corvette physical to drive and it responds well to being pushed hard. Some modern racecars can’t be overdriven, but these vintage-era cars certainly can. They have their own pulse. You can feel everything. As my father says, “you could drive this car over a dime and
tell if it was heads or tails!”

I learned a lot about 1960s-1970s auto racing last weekend. The cars are just as slippery and fun to drive as they were back in the day. The good old days really were good. I honestly believe the combination of high horsepower engines, bias-ply tires and bare bones suspension makes for better racing than most of what we see today.

Thanks to everyone at Team 45 for their hospitality and enthusiasm. These guys know how to enjoy their sport. Who needs golf? I’m retiring to the Autobahn!