Skip to content
Nine pace cars trace the history of Camaro at the Brickyard, pacing the Indianapolis 500.

Among the milestones surrounding the 100th running of the Indy 500 this weekend is Chevrolet’s legacy as supplier of the official pace car – an honor it has held more than any other manufacturer. A unique version of the new ‘17 Camaro SS 50th Anniversary Edition will lead the field on Sunday, May 29, driven by motorsports legend Roger Penske. It’s the 27th time since 1948 that a Chevrolet has served as the pace car and the ninth time for Camaro.

Chevrolet gathered examples of all nine Camaro pace cars at the Brickyard for a look at the distinctive design and production significance that made each of them leaders of the pack. 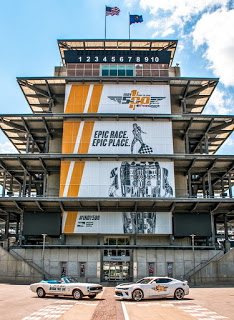 The Camaro served as the Indy pace car in its inaugural model year. A primary pace car was prepared along with an identical backup and each powered by the 396-cubic-inch Big-Block V-8 offered in the Camaro SS. In addition to the actual pace cars, a number of identically painted Camaro models – white with blue stripes and blue interiors – were used as festival and VIP vehicles at the events leading up to the race.

Distinguished by its striking orange-over-white paint scheme, the 1969 Camaro Indy pace car remains one of the Brickyard’s most recognizable pace cars. Like the 1967 model, primary and backup pace cars were built, each with the 396 Big-Block. Chevrolet also produced 3,675 replicas, prized by collectors.

Coinciding with the launch of the fourth-generation Camaro, the 1993 Camaro Z28 pace car featured a daring black-and-white paint scheme highlighted by multicolored ribbons – with a matching interior. The engine was the new Z28’s production LT1 engine, rated at 275 horsepower. Chevrolet produced 645 replicas, including 125 that were used as festival cars.

The introduction of the fifth-generation Camaro was celebrated at Indianapolis with the fifth Camaro to pace the race. Powered by the production 6.2L LS3 engine rated at 426 horsepower, it required no performance modifications to lead the field. Transformers star Josh Duhamel drove the pace car. Chevrolet didn’t produce official replicas, but 25 similarly styled festival cars were built.

Wearing an Inferno Orange exterior with White Diamond racing stripes, the Camaro returned to the Brickyard for its only back-to-back appearance as the pace car. It was driven by Good Morning America anchor Robin Roberts, who was only the second woman to drive an Indy pace car. Chevrolet produced about 200 replicas, including 50 that were used as festival cars.

Camaro scored a three-peat as the pace car in 2011, this time dressed in a white-and-orange theme that paid homage to the iconic 1969 pace car. It was driven by racing legend A.J. Foyt, who was awarded the Camaro pace car when he won the 1967 Indy 500, but reportedly declined it because it didn’t have air-conditioning. Chevrolet built 500 replicas of the retro-styled 2011 Camaro SS pace car.

Driven by three-time Indy 500 winner Dario Franchitti, the 2014 Z/28 pace car was the most track-focused Camaro to lead the race. It was powered by the production 7.0L LS7 V-8, which was rated at 505 horsepower, and featured high-performance equipment such as carbon-ceramic brake rotors behind large, 19-inch forged aluminum wheels.

Four identically prepared pace cars were built to support the race, all with exclusive Abalone White exteriors featuring “100th Running of the Indianapolis 500” graphics on the doors and the iconic Indianapolis Motor Speedway wing-and-wheel logo on the quarter panels. They also incorporate the exterior cues and graphics that are unique to the Camaro 50th Anniversary package that goes on sale this summer.