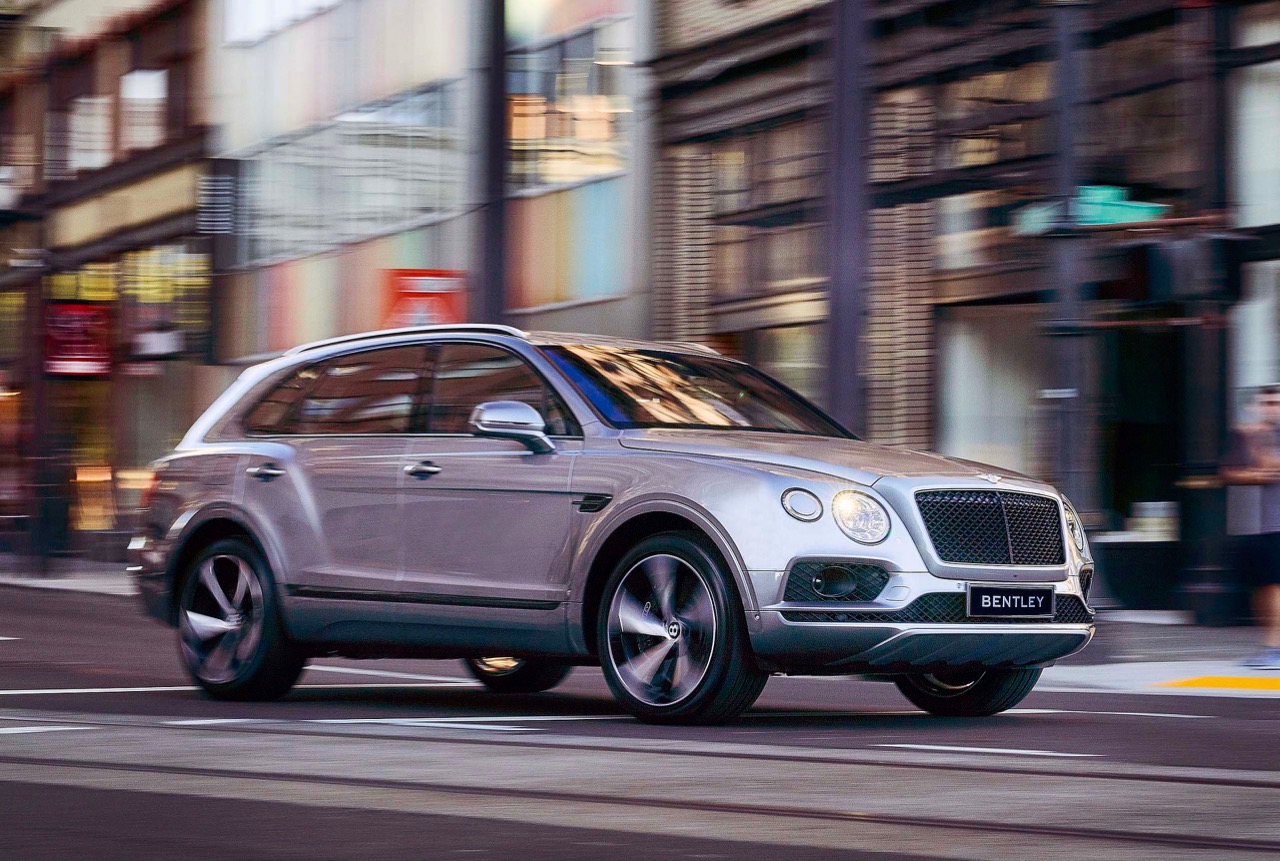 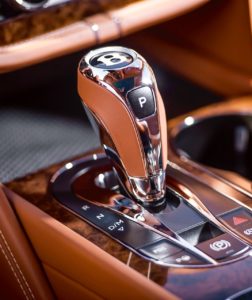 If those three little words ‘Money No Object’ are in your lexicon of life; if you’re a seeker of the supreme, the pursuant of perfection, then chances are you’re not going to let a piffling $64,100 color your decision when seeking out the ultimate luxury sport ute.

Want the best, then you’ll not think twice about charging $229,100 to your Amex Centurion for Bentley Motors’ most sybaritic off-roading chariot; the 600-horsepower, all leather and mirror-varnish veneered Bentayga W12.

But wait just a sec. Ignore the Gucci-suited salesperson’s practiced patter about the W12 having more horses than the Kentucky Derby and enough torque to uproot tree stumps. Actually the Bentayga you really want is the one you just walked past. For the 2019 model year, Bentley is offering a V8 version. While it’s $165,000 MSRP will no doubt be of great interest to newcomers to the Bentley brand – who doesn’t want to save $64-grand? – the simple fact is that this new V8 is even more of a joy to pilot than its pricier sibling. 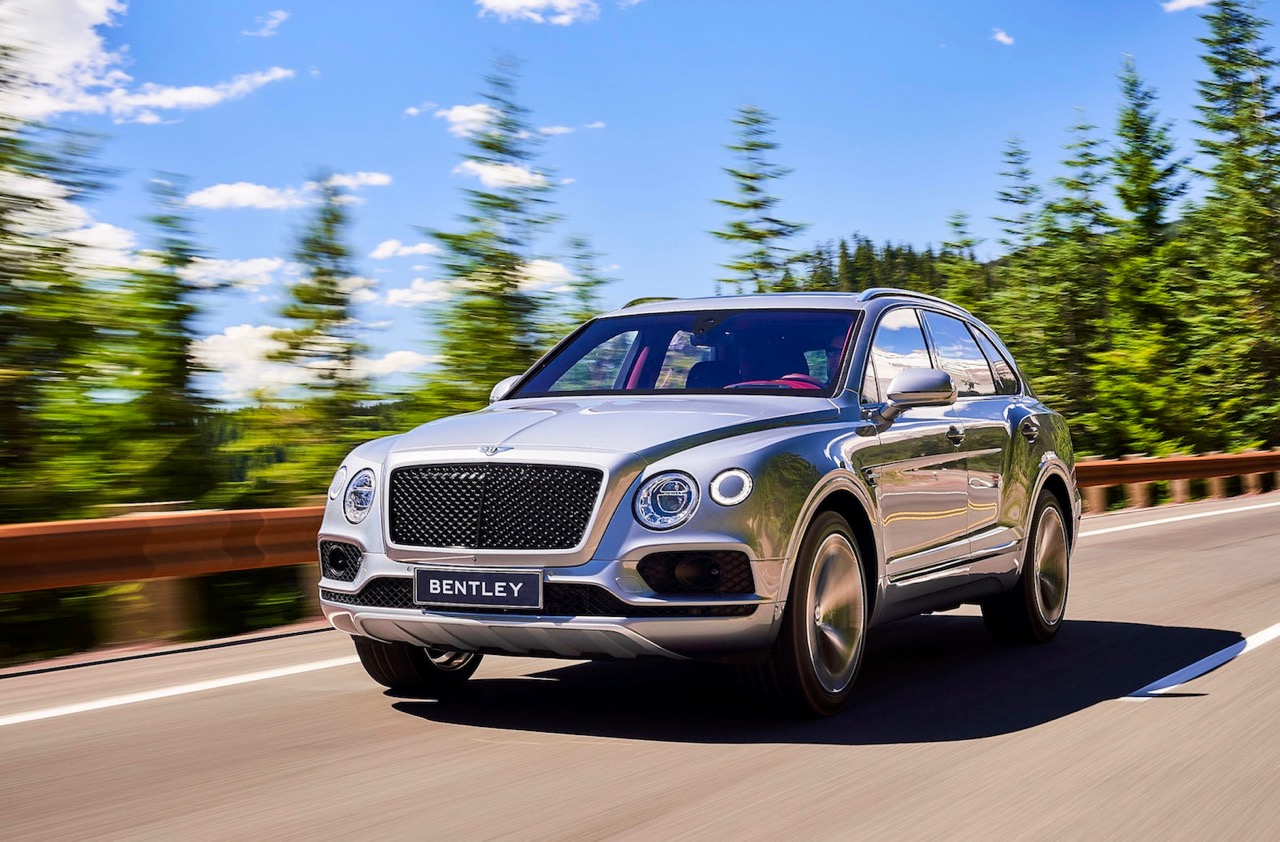 On paper, the numbers may not appear quite so enticing. The 4.0-liter twin-turbo V8 cranks out 542-horsepower compared to the W12’s 600-hp. The 4.0 conjures-up 568 pound-feet of torque compared to the 12’s locomotive-like 664 pound-feet. But the V8 weighs-in at around 110 pounds less – which would make Jenny Craig proud. And the Porsche-developed V8 is deliriously eager to spin to a soaring 6,800 rpm redline, which makes it the highest-revving powerplant Bentley has ever fitted to a road car.

And with a soundtrack that has the throaty James Earl Jones bellow of a NASCAR stock car pounding around Daytona, this big V8 just feels so much more alive, more energized, more dynamic than the built-for-silence W12. 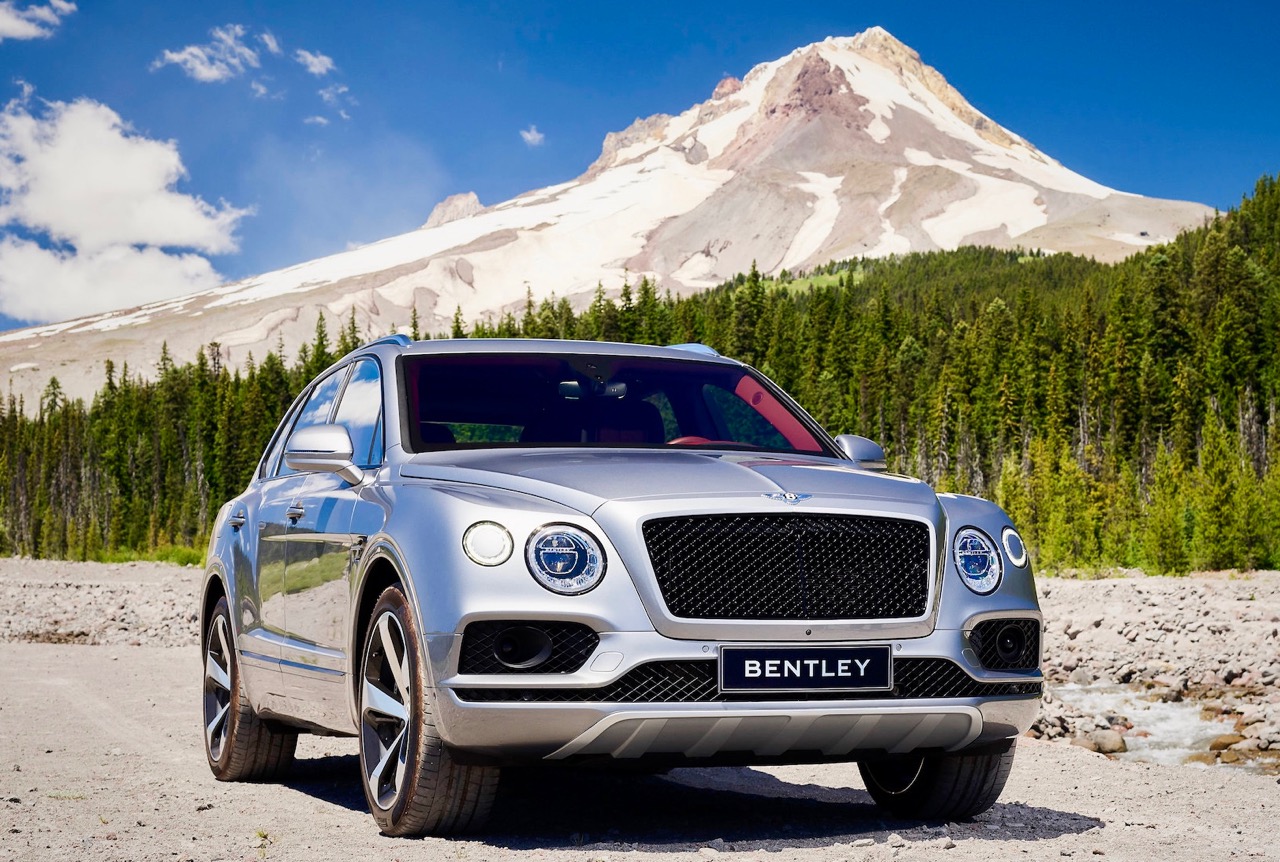 So what’s it like to drive? Bentley jetted us to Portland, OR for a thrash along the Columbia River Gorge and up and around snow-topped Mount Hood. On roads with actual curves.

But not before a stop-off at Portland International Raceway to watch Bentley’s thundering Continental GT3 racecar do battle in the Pirelli World Challenge Series. The connection? The racecar uses a race-configured version of the very same 4.0-liter twin-turbo V8 powering our Bentayga test SUV. 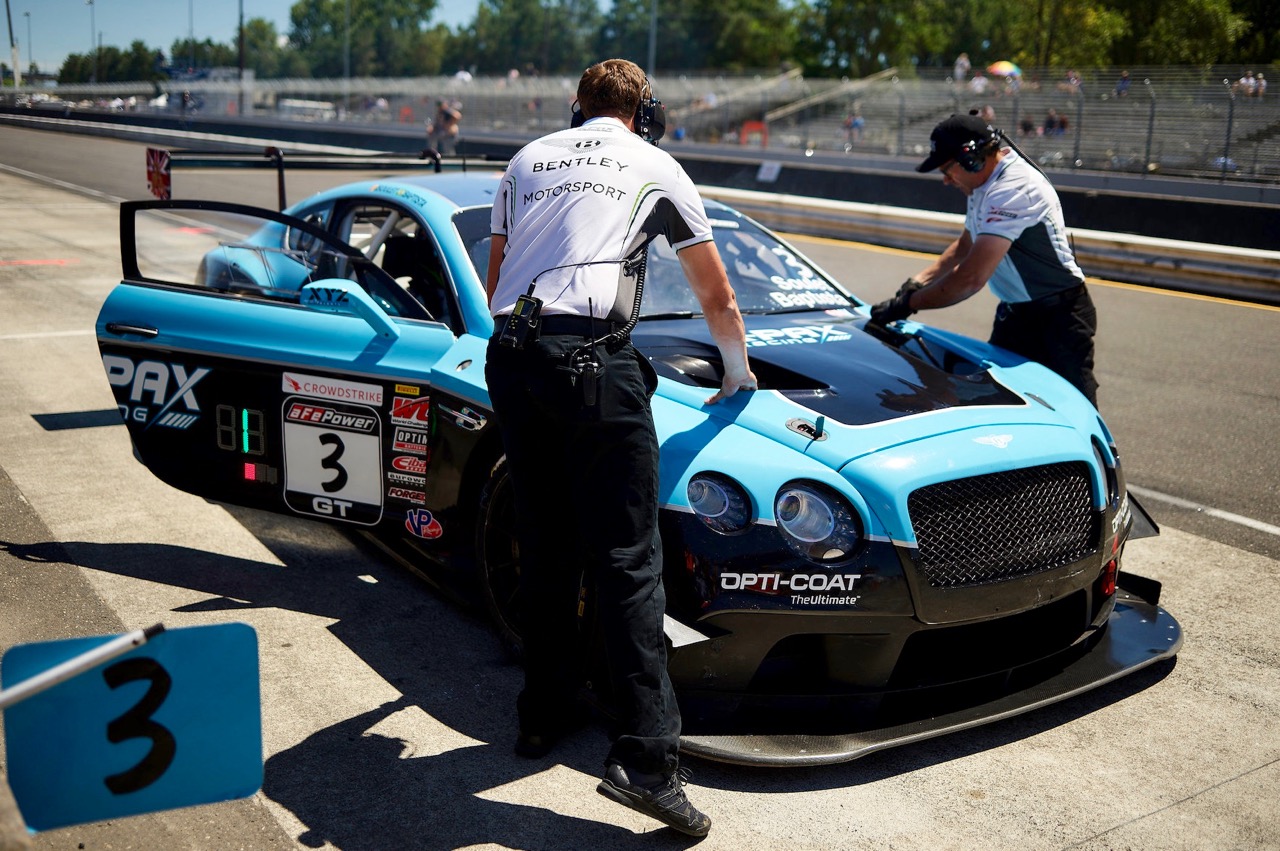 And a pretty impressive performance it was too. After a pesky engine problem, requiring a late-into-the-night rebuild, put the car at the very back of the starting grid, it scythed through the field to cross the line third overall, and second in class. Quite an achievement. And thrilling to watch. 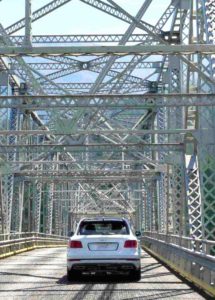 Right now though we’re on Highway 84 heading east, snatching glimpses of the mighty Columbia River to our right, the road dipping and diving, sweeping and swooping through this glorious part of the Pacific Northwest. Man, does it feel quick. Floor the throttle off the line and the thrust builds like a G550 on takeoff. Click the stopwatch and you’ll see zero-to-60 dispensed with in a mere 4.4 seconds, and given a stretch of blacktop long enough, 180 mph will appear on the speedo. Lumbering logging truck ahead? Just see the gap ahead, pullback on the gorgeous metal paddle shifters, and the eight-speed automatic kicks-down twice, rocketing the ultra-luxe Bentayga safely past.

Arguably even more exciting is the way this big 4×4 Bentley SUV handles itself. With less weight up front, the steering feels even more alive and precise, the front tires more eager to bite into curves and alter direction. There are two-seat sports cars that feel less nimble! Yet this being a Bentley, the ride is never anything less than magic carpet-like, its active roll-control air suspension soaking up lumps and bumps like Brawny on kitchen spills. 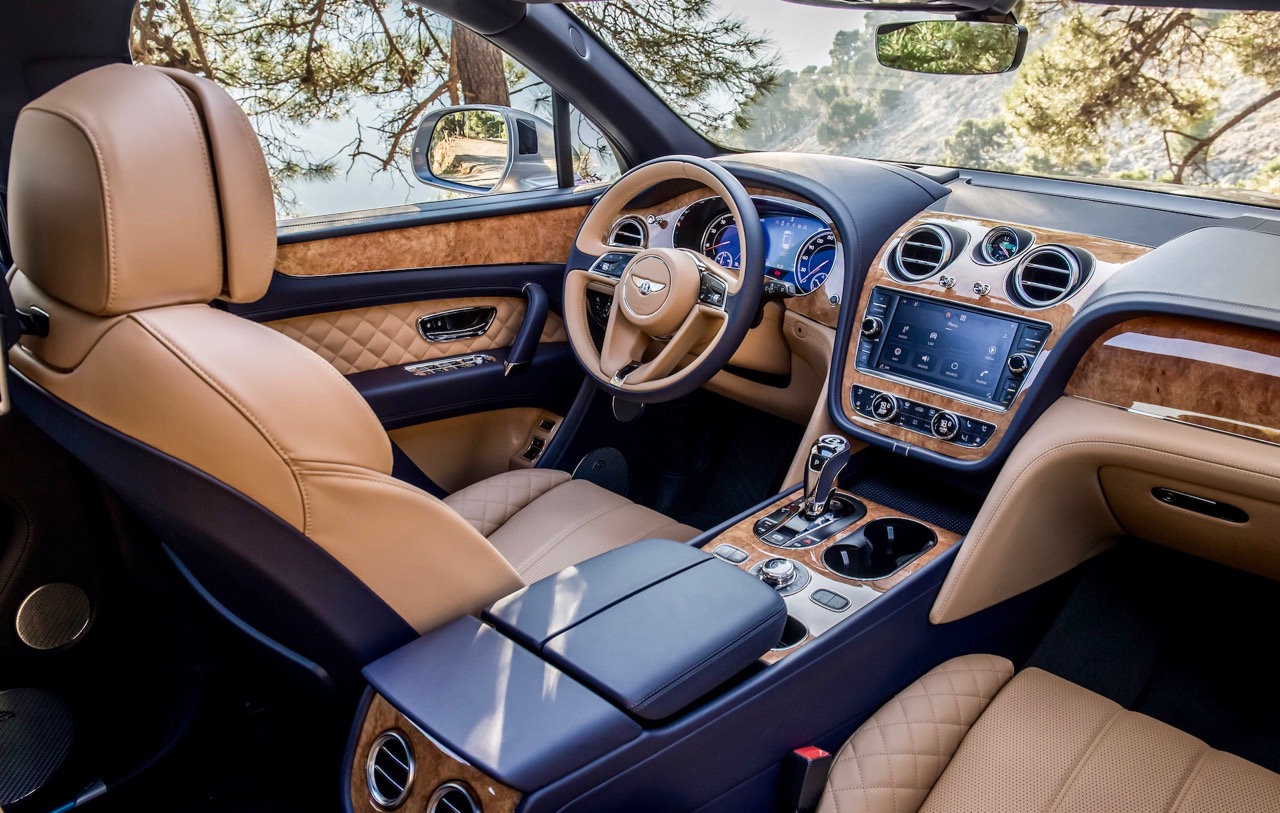 Here behind the wheel, all the Bentley luxury boxes are double-checked; nothing too much is lost in the move down market. Now the rear captain’s chairs and third-row kiddy seats are extra with a three-seat bench as standard. Yet as with the W12, the entire cabin of the V8 is a masterpiece of artisanal craftsmanship and glam. No, anyone craving the best-of-the-best is unlikely to be swayed from the flagship Bentayga. But they’d have more fun with the V8. And save a bundle in the process.